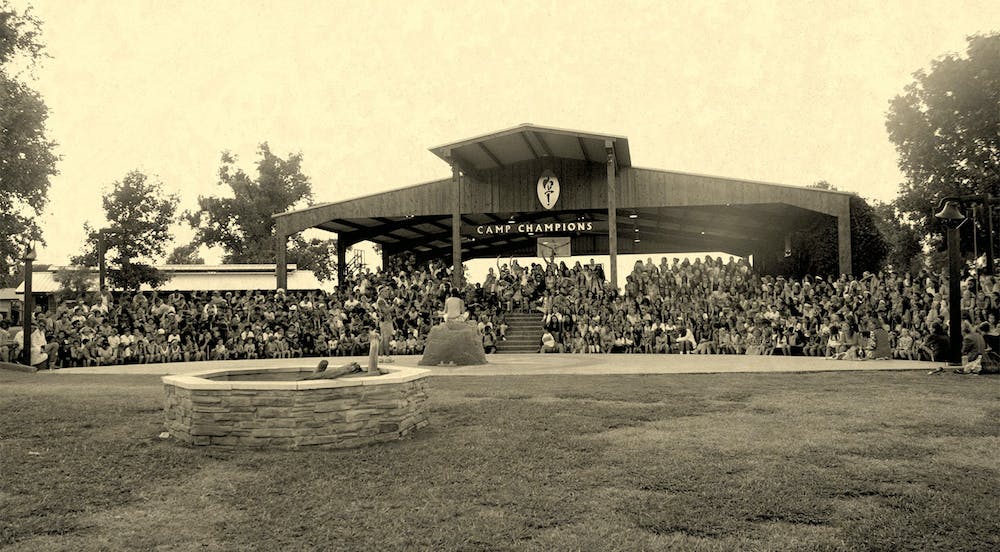 The History of Champions

Camp Champions’ founders still remain close to the camp’s heart. Darrell K Royal played quarterback and defensive back for the University of Oklahoma before his career took off in 1956 when he began coaching at the University of Texas, winning three national championships.

Horton Nesrsta served over twenty years as a Southwest Conference football referee. Known to be smart and funny, he was one of the best referees in the league. He is remembered at Camp with Horton and Carol Ann’s Home Plate.

Hondo Crouch was prominent in the sporting world. He swam for the University of Texas, earning All-American honors. After a brief stint in the Air Corps, he coached at various swim camps across Texas. Hondo took the pen name Peter Cedarstacker to write satirical articles for his local newspaper. Shortly after founding Camp Champions, he bought Luckenbach, Texas, and came up with the renowned slogan, “Everybody’s Somebody in Luckenbach.” Hondo is honored in the boys’ swim bay with two of his quotes: “Think or thwim” and “Swimming— you can’t find a better sport to save your life.”

Campers return year after year to Camp Champions to take part in its many traditions. Torchlight, the nightly ceremony to honor the camper of the day, started the first night of camp and has taken place every night since, beginning and ending with the same songs at each ceremony.

Pride fills the Trojans and Spartans just as in 1967 when the Camp Champions Greek Games began. Each day campers take part in inspection and flag raising.

Hondo Crouch established the tradition of the Lake Swim (originally called the Royal Order of Channel) by swimming across the lake and back once every term. Campers today eat in the Fillin’ Station as they did in the ‘60s.

Camp’s legacies are most evident in the Fillin’ Station with the flags and plaques hanging from the rafters created by each cabin at the end of the terms.

WE JUST CELEBRATED OUR 50TH SUMMER!

Since 1967 we’ve been helping children grow into the Champions they are intended to be, and in 2016 we celebrated our 50th summer! We observed this monumental occasion by having our best summer yet with the biggest firework shows included. In the fall we had our most fun Family Camp to date, with old and new parents, counselors, and campers who got to participate in a myriad of activities and camp traditions.