Making a Storm a Moment

As a young man, you would have described me as intense. OK, some still do so, but I was particularly focused and driven as a teen and young adult.

I had a list of goals that I pursued relentlessly.

As a result, I got a lot done.

But I slowly realized I was not particularly happy or content. Each goal I achieved led inevitably to another and another. People around me seemed able to savor the moments. They appreciated not only the obvious moments (celebrations, vacations), but also unexpected ones. They could laugh at themselves and unexpected twists of fate.

To them, life seemed like an adventure, not an project requiring micro-management.

Around age 26, I reflected a great deal on this and wondered when I had been “in the moment” and not overly driven.

The answer came back to me. I was that way at camp. Nothing at camp went one my permanent record. It was safe to try new things. And being silly was sometimes the entire point. We did things for no other reason than to laugh or relax.

I have a vivid memories of watching a sunset for 10-15 minutes with my best camp friend. The light played on the bluff of a cliff and on two different types of clouds behind it. In one viewing, the setting sun was creating bronzes, peaches, coppers, reds, oranges and pinks. The colors danced and shifted.

During that 15 minutes, I “accomplished” nothing. But I bonded with a friend in a moment of beauty and majesty.

Please forgive my moment of reflection, but it relates to today’s topic.

Last night we had a storm during dinner and into the evening. We had thunder and lightning. The evening activities (Casino Night and Torchlight) were cancelled.

Sounds like a bummer of an evening, right? It could have been, but it was quite the opposite.

Here is how Zachary Sir (the head of our Media department) described the evening to me:

“When people think of thunderstorms at camp, they normally think of kids hiding in their cabins, shivering, scared of the rain and thunder, bored out of their minds, etc. Tonight in the Fillin’ Station [camp dining hall], there were no tears, no breakdowns, and no confusion on where to be or what to do. However, there were dance parties, songs and chants sent from the boys’ side to the girls’ side, tables became stages, brooms became guitars, counselors and campers turned the Fillin’ into one of the greatest concerts of all time. Something about how camp is fun even when it doesn’t go as planned… I don’t know… It was a very special thing and it felt a lot like camp. I’ll let you take it from there, Señior Editor, if you think parents would like it. Goodnight!”

Our plans were scuttled, yet we found fun.

If you read my article from earlier today about Disruptive Moments, this is a perfect example.

Last night, your kiddos could have decided that rain ruined the night or that thunder is scary. But they embraced a mindset that said, “no storm can keep us down” and created a memory.

That is camp at its best! 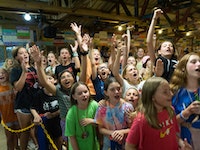 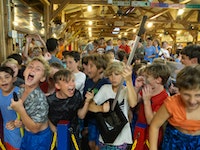