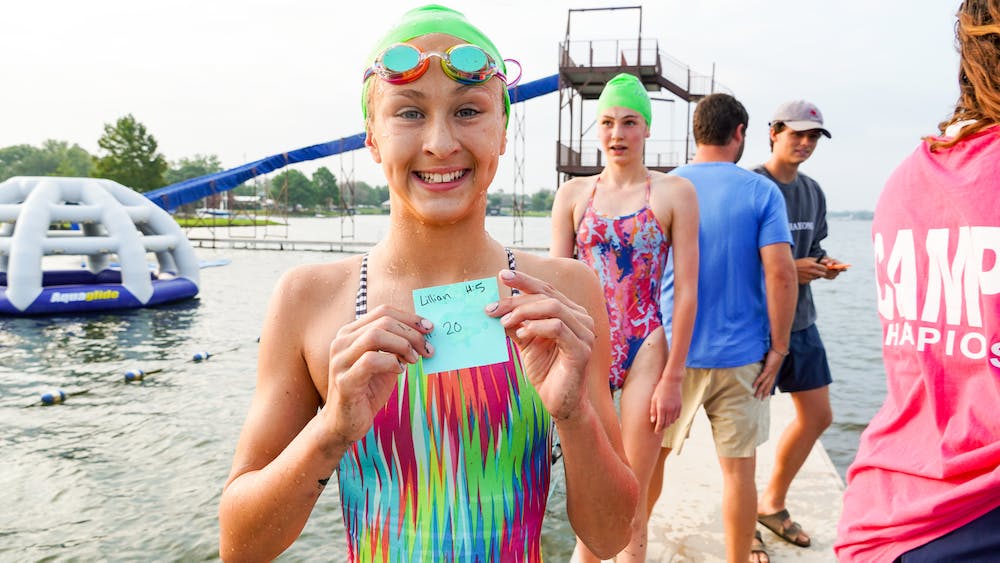 Yesterday, we had the most impressive Lake Swim I have ever seen.

It was the largest ever with 150 swimmers.

It was the most organized.

The final swimmers all came in within 40 minutes. Usually, we have some campers that take 45-55 minutes. One camper 14 years ago took over 1.5 hours. He was long on buoyancy and determination, but low on actual swimming technique.

And it we saw the fastest time, not from one camper, but from two.

The Lake Swim is a tradition involving our Maxis and Aquanauts – campers who have finished 7th and 8th grade. We used to have conduct the swim on two separate mornings, but last year, we decided to pick one morning and swim in heats. This has the advantage that we could select our one “sleep-in” morning, so the Lake Swimmers can wake at the normal time (7:30) and still make breakfast rather than waking at 6:30. [Note: anyone with a 7th or 8th grader can appreciate how little they like to wake early.]

We line the lake with 30 counselors in kayaks, 4 waverunners, 2 ski boats and 7 buoys. The buoys provide a lane for swimming across the lake and a separate lane for the return. The campers all have bright green “Lake Swim” caps. We also allow campers to swim in life jackets if they so desire. Like the best camp activities, it is “challenge by choice”.

We had 4 heats for the swim, separated by 4 minutes.

As I was readying the last heat, I saw them.

There were two women heading to the dock. They were heading toward us fast. A quick glance made me realize that this pair be arriving soon.

I think that if we had attached a squirrel on water skis behind either of them, they would have had that squirrel skiing.

Please note that we had a small bit of confusion. We have a blue “lily pad” that helps campers get out of the lake and onto the dock. One of the swimmers swam to it and the other swam to the dock. They were neck and neck until this divergent conclusion. Our rule is that the first to touch the dock is the winner, so the lily pad swimmer had an extra second to touch the dock (hence the photo showing 11:20 on it). After a review of the Royal Order of Channel Swimmer judges, we deemed that they would have arrived at the same time. And since that time was the fastest any of us had ever seen, we deemed that they deserve to share the title “Venus of the Bay”.

I wanted to have a separate picture of both swimmers, but our new blogging program vexes me. As a result, I found this one that has both young women in it, but neither ideally. One Venus (Lillian Ma’am) has the wrong time and the other (Elizabeth Ma’am) is not smiling as she does not know the camera is on her.

Please attribute this shortcoming to my technological deficits and not a reflection of their amazing performances.