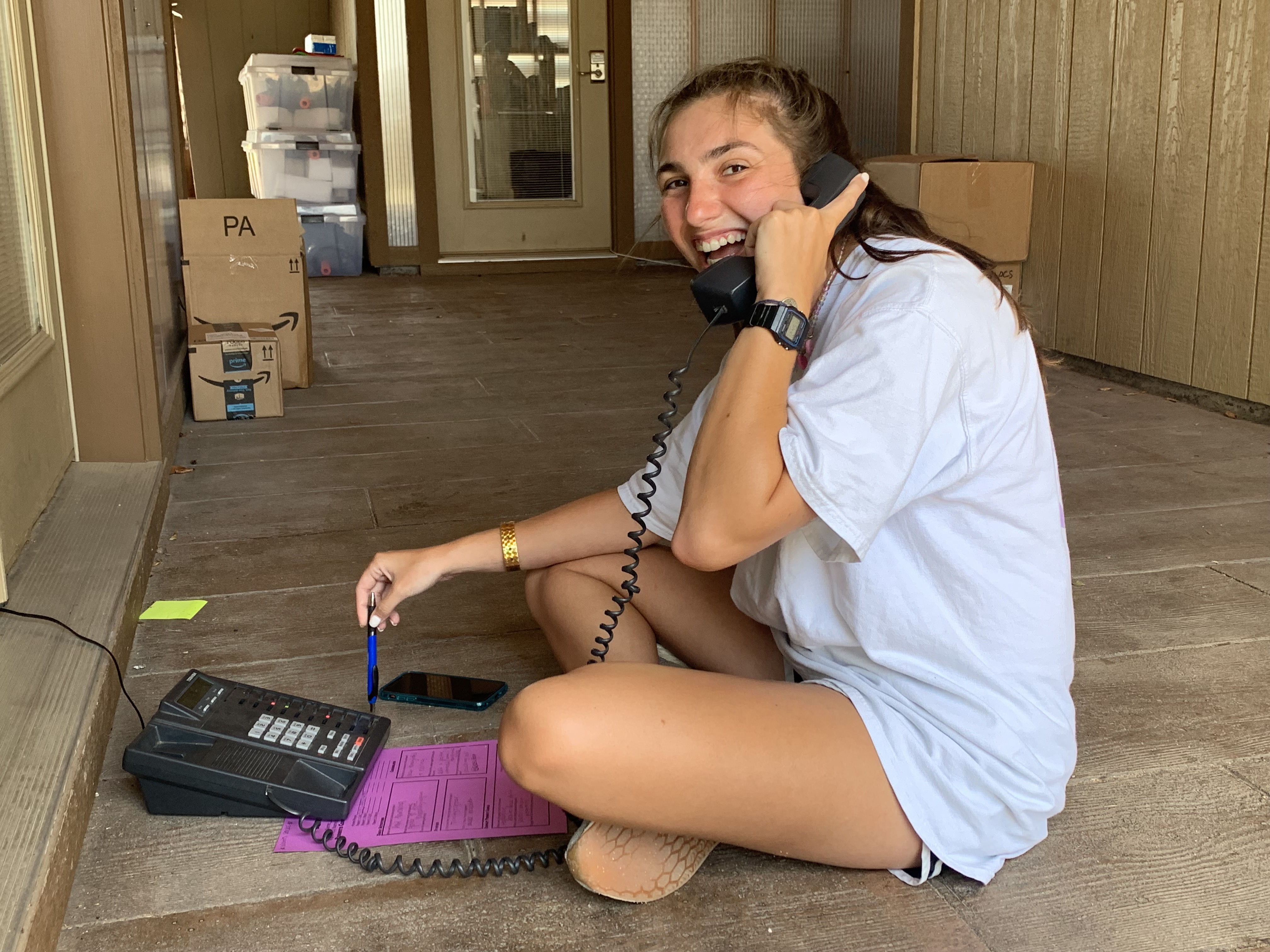 I love this picture. Catie Ma’am (a camper and counselor at Camp Champions for 13 summers) is calling a parent of one of her campers. First and second year parents automatically get a call at the end of the first week. Other parents can opt in for such a call. Catie Ma’am was recounting a story of a kayak that started to take on water and the giggles that ensued. Even from the brief portion I overheard, I could tell she adores her camper! The blog will later mention “parent phone calls”, so this photo is actually relevant. Onto the blog!

For years, camp and campers seemed similar from one year to the next. But, technology has led to changes that are more frequent in the past two decades. Please let me describe a few.

Susie Ma’am and I did not see huge changes during our first 5-6 summers as directors (1993 through 1998). In 1998, we were the first camp in the nation to post online photos and blog updates. This small change ended becoming immensely popular and led to several important affects: some for camps and some for parents.

For the camps, they had to change staffing and systems. They now had to hire photographers and make sure that every camper was photographed. For the parents, the photos and articles helped make some nervous parents more confortable with trying camp. Also, they helped the parents see the mission and intentionality of the camps.

Sometimes, the photos actually alarmed rather than reassured parents. One (eventually humorous) example featured a poor mom who thought the red bandana around her son’s arm was a bleeding wound. Fortunately, photo clarity has improved since then!

Susie Ma’am and I did not see too many big changes until around 2011-2012. That is roughly the time Instagram and Snapchat came around. Facebook/YouTube had refined their algorithms. Mobile phones were ubiquitous. Suddenly, we saw increases in campers complaining about being disconnected from their phones. Campers would give their usernames and passwords to friends at home to keep their Snapchat Streaks alive. Campers would worry about missing out on important group chats. They suffered from FOMO – “Fear of Missing Out.”

In the last 3-4 years, we have seen other changes. Most of our teenage campers comment that they now love being tech-free for three weeks. They still count their phones as prized possessions, but they are slightly more cautious. They often feel a burden to keep up with their online “friendships” and all the current memes/trends.

It is almost a full-time job maintaining your online presence as a teen. SO they have come to appreciate the break during camp. Their FOMO has evolved into JOMO ( Joy of Missing Out). I love this!

Last year, I asked our high school senior daughter why so few of her friends weren’t dating anyone. When Susie Ma’am and I attended high school (before the earth cooled), many of us had boyfriends or girlfriends. I had read that dating is way down. I asked her why.

She responded, “You have to make a decision about whether you want to stay in touch with your girlfriend groups or a boyfriend. You do not really have time to be texting and Snapchatting all of them.”

Since the average teen spends 60 hours a week looking at screens (with 20-25+ hours on social media alone), adding another relationship that requires dozens of daily texts simply becomes a burden. That would have never occurred to me.

Here are a couple of other changes that you might not expect.

For years, Susie Ma’am asked campers “what would you rather give up – junk food or TV?” The resounding answer was consistent: junk food. After all, young people today are more conscious of healthy eating. Also, there are so many entertainment options on TV. The choice was simple.

Starting last year, the answer changed. Now, they are willing to give up TV. Susie Ma’am was baffled. Were they succumbing to junk food advertising? Were they losing interest in entertainment? What major trend had we missed?

It became clear to her when she heard the following extra comment, “I would happily drop TV. After all, I watch everything on Netflix!” Today’s teens are watching on computers, phone and tablets. The TV feels quaint to them.

Our own son did not understand the concept of postage stamps. He wrote a thank you note as a 20 year-old. We told him to put postage on it. He happily added a 1 cent stamp and thought he was done. Postage seemed quaint to him.

College students have no idea that you have to dial “1+” for a long distance call using a LAN line. Mobile phones simply do not require “1+”. When our counselors make parent phone calls (mentioned above), they find this baffling. This does not feel quaint, just extraneous to them. I get it.

As long as I am talking about parent phone calls from counselors, we saw a new trend this year. Several of our counselors attempt to call a parent and then leave no message. We specifically train them to always leave some message so that the parent will NOT think the missed call is an emergency, but is simply an update. But a few counselors must not have heard this or their modern day manners kicked in instead.

What do I mean by “modern day manners”?

I learned that most of Generation Z thinks voicemail is rude. They do not have voicemail. Or, if they do, they have never checked it. Ever. I found this baffling until I had a nice chat with a group of them.

“Don’t make me listen to half a recorded conversation. That’s rude. If you want me, just text me!”

So if you got a call from camp without a message and felt your heart race, please find some comfort in the idea that the counselor was simply trying to be polite.