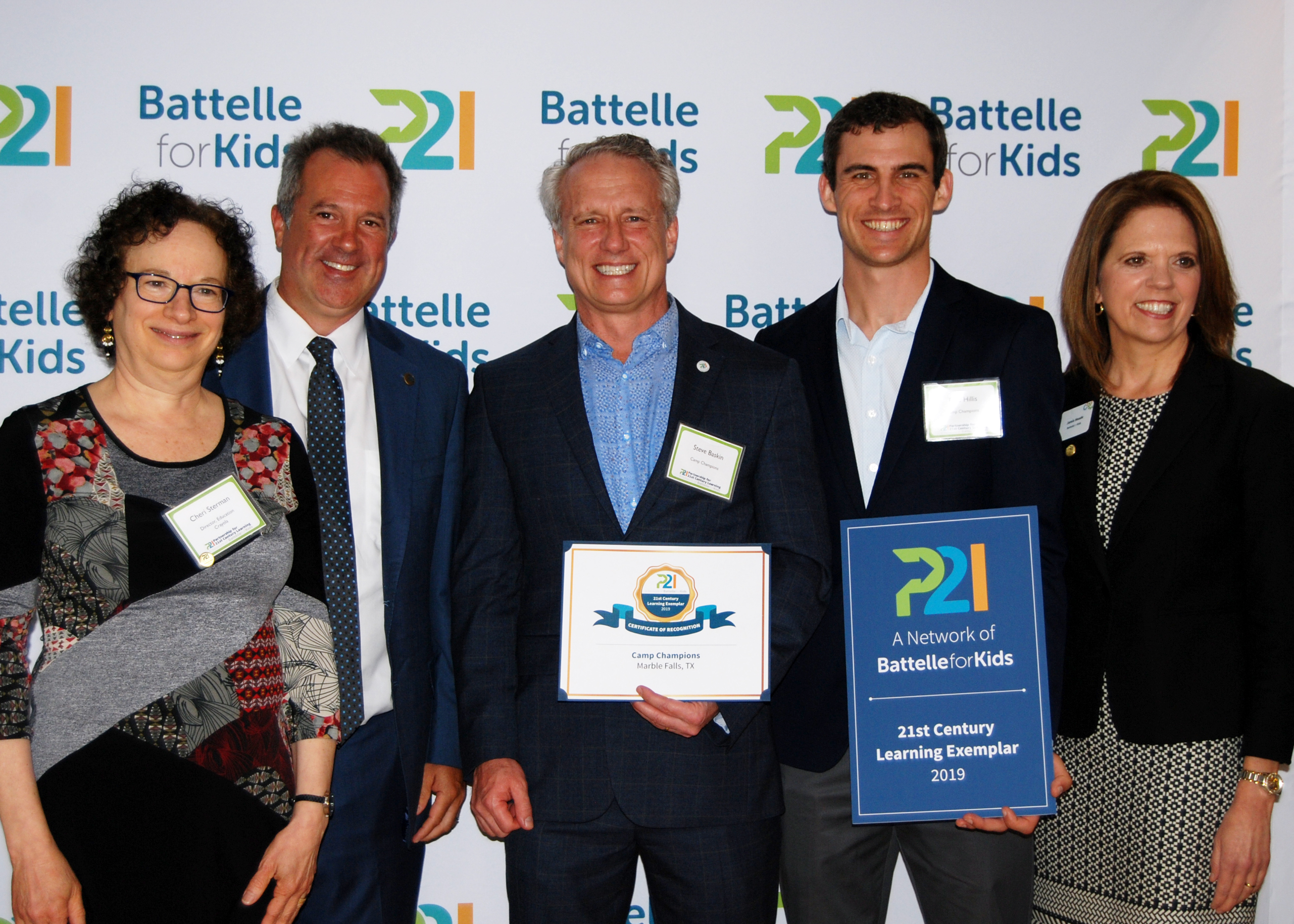 My parents taught me that no one likes a bragger, but I wanted to share a fun piece of news about Camp Champions.

This year, Camp Champions became just the only non-school program to become a new “21stCentury Exemplar Program” by the Partnership for 21st Century Learning (now part of Battelle for Kids). We are only the 4th non-academic program to ever receive such a recognition.

If you read my (quite long, quite dry) blog earlier this week about 21st Century Skills, you read about the The Partnership for 21st Century Learning. If you have not, let me give you a shortened introduction. That group has been a leader in education advocacy for over a decade. If you have heard about the “4 C’s” (Communication, Collaboration, Critical Thinking and Creativity), you have heard of them. They are an organization of companies (not governments or academics) who came together to ask a simple question, “What are the skills that young people will need in the modern world?”

Their analysis is detailed and impressive. It is also more than you want to read right now. So allow me to share a simplified frame: the most important skills for success in the modern world are 1) flexibility and adaptability (the world is changing rapidly) and 2) uniquely human skills – those that cannot be replaced by machines. These include the 4 C’s.

Flexibility is fairly self-explanatory. Our children will change careers more often than we changed job titles! They need to be adaptable with the ability to learn continuously.

Lets look at the idea of “human skills”. If a task is repeatable and/or requires lots of data, machines will eventually replace humans. We have seen robots in factories, but machines will soon expand to other areas, like transportation (self-driving vehicles), medical diagnoses, basic accounting, much of contract law, sorting perspective employees, etc.

But even the most optimistic endorsers of Artificial Intelligence believe there is one area that machines are unlikely to replace people anytime soon: finding creative solutions to new problems. Who does this best? The answer is “groups of people with diverse thinking who work well as a group”. Individuals who can lead and facilitate such groups (already a highly valued skillset) will become more and more treasured.

Similarly, machines will not be able to provide the “human touch” that are essential to so much of our experiences, from talking with a therapist to arguing in front of a jury to comforting someone who is ill to resolving conflict between individuals.

It turns out that the camp experience trains all these skills (including flexibility). In fact, it does so very well. Over the past decade, we have tweaked our traditions and programming to focus on these skills. This was not that hard - they are most often the skills the campers practice when they are free of any technology.

We have always known this, but it was a true thrill to become recognized in our nation’s capitol as a leader in teaching these skills.

So while your child is having a blast practicing archery, playing card games, learning ceramics, getting up on skis or honing climbing skills, please know that a lot more is happening. They are participating in a powerful learning program.

PS  [Susie Ma’am here.  I want to include an additional fun fact.]  Last fall, Steve Sir was asked to testify for  the National Academies of Sciences, Medicine and Engineering on the benefits of “camp education”.  He was the sole camp professional asked to speak.  He talked about how camp can be a powerful augmentation to traditional education.