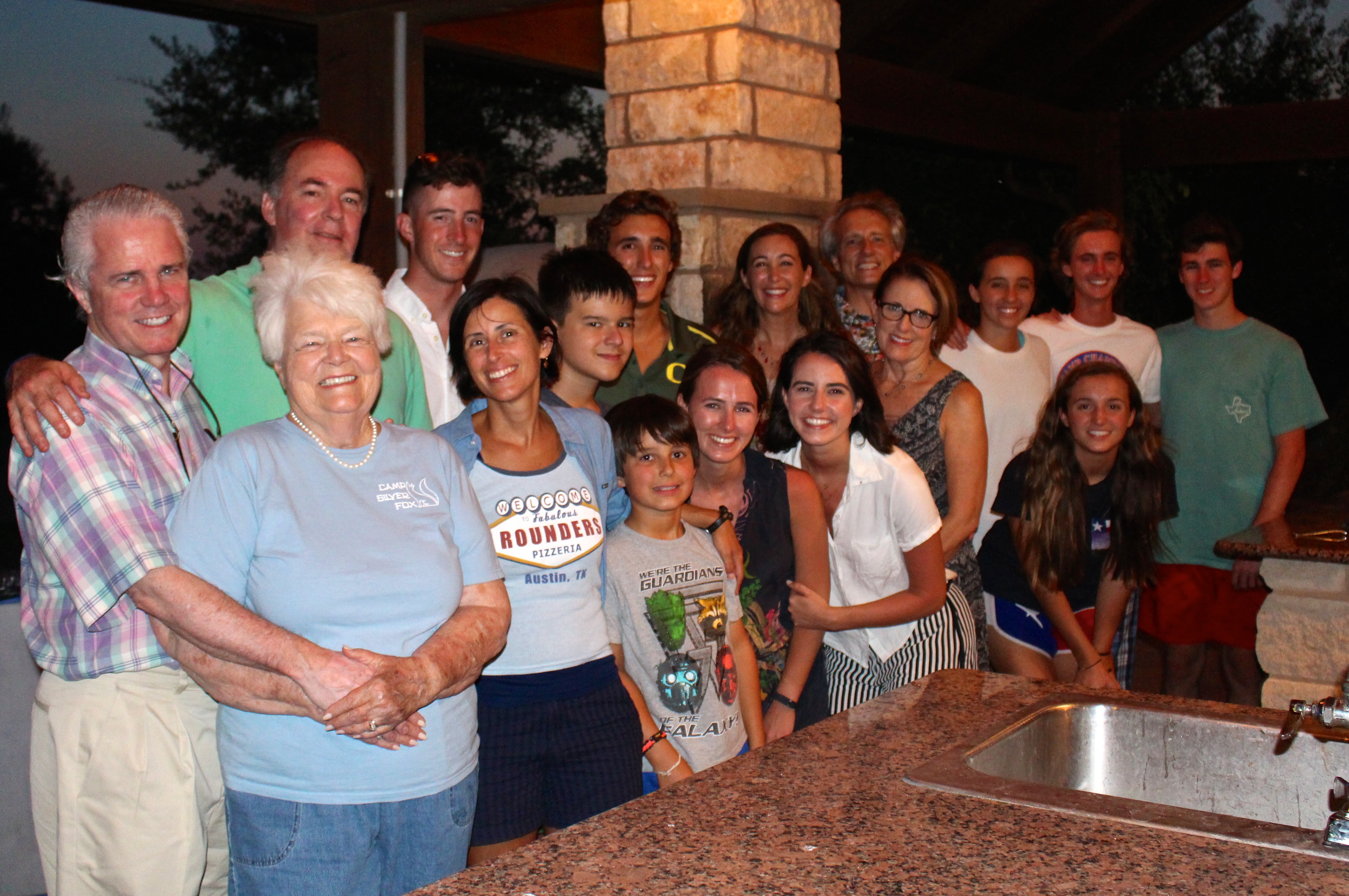 Two weeks ago, my mother passed away from pneumonia. It was unexpected. Just 3 weeks before she went to the hospital, she drove herself to Austin where she spent a week watching two teenage grandchildren and meeting with tons of friends. She spent a day with us here at camp. She was fully cogent until the end.

Her passing, like her life, was impressive and on her own terms. She was clear to all of us that she had lived the most wonderful of lives. She enumerated her blessings to each of her children with joy and clarity. She also knew her body was failing, so she insisted that we let her pass.

Her funeral was a celebration of life and an inspiration to lead a better one.

Below is my eulogy for the Silver Fox that I shared at her funeral. My hope is that it will put a smile on your face and lift you up.

I know she always did both for all of us.

In my life, I had two heroes. One was Roger Staubach. He won the Heisman trophy, served his country and led the Dallas Cowboys to two Super Bowls.

The other hero was the more impressive one – Joan Baskin, or the Silver Fox.

Assuming I can hold myself together, I want to celebrate my greatest hero.

I’m won’t even try to list all her accomplishments. The list is long. I mean long. (See the front page article from the Midland Reporter Telegram that ran after her passing for a partial list.) Instead, I want to share a few thoughts about what made her such a force that creates a legacy that we all must continue.

She was the wisest person I haveever met. Sure, she was also brilliant – she was named the top female graduate of the University of Texas at age 20 – but she lived by a set of beliefs and principlesthat trulyset her apart. I felt like she was playing chess while the rest of us were playing checkers.

So allow me to share snippets of wisdom from the Silver Fox. I encourage you to take notes:

Snippet 1: Happiness is a choice.

She always told us that happiness is a choice, and she showed it in good times and bad.

When daddy passed away, her response was remarkable. “I married a wonderful man who is now in a better place. But Pat did not like to travel, so I can do some things I have been thinking about.” She was at Machu Picchu within 6 months.

When her hearing began to fade, I asked her if that made her frustrated. “Some parties are hard to hear people, but now I can watch sports without listening to Brent Mussberger!”

Snippet 2: It is wonderful to learn.

Despite being the most knowledgeable person I know, she was quick say, “I don’t know – lets go find out!” Encyclopedias, books, other people – everything was an opportunity for knowledge. She modeled a love of learning and intellectual modesty.

She lived by a wonderful mantra: she never needed to Be Right. Instead, she simply wanted to find “the Right Answer”. She did not strive to convince, but to convene.

Snippet 3: Life is what you sort for.

She shared a remarkable example of this from Becky’s (my older sister) first day of Kindergarten, roughly 58 years ago. She picked up Becky and asked about her teacher, her classes and her friends. In each case, Becky smiled and said they were great.

“Did anything else happen?”

“Well Josh Jones pulled my hair and pushed me.”

Her mother bear aroused, mommy stopped the car, “He did what?!? That is awful.” She asked a few additional questions about Josh and they went home.

The next day, the Silver Fox picked up Becky again. Without any prompting, Becky instantly launched into stories about Josh Jones’ misbehavior.

The Silver Fox wisdom instantly kicked in. This is how she relayed the story to me. “I realized that I had ignored the positive and become a Tiger mom on the negative. So I smiled and told her, ‘Josh is just a silly boy. Tell me about your wonderful teacher’. We then talked at length about everything lovely that had happened that day. From then on, her reports were overwhelmingly positive.”

Mommy saw being a parent as her greatest calling. She certainly put a staggering amount of time and thought into it.

She talked to children like they were 2-4 years older than they were, avoiding baby-talk. Doing so, she stressed the importance of words while also setting high expectations for her children and grandchildren - we were thinking people worth listening to.

She created my favorite parenting technique. She told us there were three types of people. Some people make mistakes, and then make the same mistakes over and over again. The second group is smarter, they only make mistakes once before they learn their lesson. She would then pause until I asked, “what about the third group”?

“Ah, the third group is very rare and very special. They see other people make mistakes and avoid doing so themselves. They are the truly wise.”

Let me tell you. From that moment on, I wanted to be in the third group. As a result, she never had to say “don’t”. Instead, she would casually point things out to me. “Look at that poor person who is addicted to smoking.” Or “that is such a bad idea to ride a motorcycle without a helmet.” “That college freshman partied so much and will need 3 years just to catch up”. She knew I had a rebellious streak in me. Telling me “don’t” might tempt me to try. Instead, she simply pointed out the mistakes of others – ifI want to be in group #3 (the truly wise), I HAD to act differently.

This is truly a case of playing chess – she was not managing behaviors, she was crafting personal narratives that would help us navigate the world in a positive and empowered way.

She also had a deftness with language. Once in high school, I went into my room with a girlfriend. We wanted privacy. She easily could have said, “Do not lock yourself into a room with a girlfriend, that is unacceptable.” She would have been 100% correct, but potentially ineffective. Instead, she sat me down and said, “Sweetheart, I am not comfortable with you going into your room that way.”

Darn it. It was such a clever turn of phrase, she disarmed my inner rebel and I agreed to never do that again.

Final Snippet: It is amazing what you can get done if you don’t worry about who gets the credit.

She wanted to help Midland, be it the theater, the airport, the hospital, the schools or her church, or the countless other people and projects she was involved in. She only wanted to be part of making things get better.

I find myself thinking about an odd day in the spring of 1986. Oil prices had crashed from $27 to under $10. The survival of Midland seemed in doubt as companies were shuttering or moving to the larger cities. I, however, was not seeing this. I was studying in London. I walked by a newsstand and saw a headline in the International Herald Tribune: “West Texas City Rallies”. Curious, I pick up the paper and see the byline is Midland Texas. The reporter seemed bewildered at the reaction of this city. Some odd person (then head of the Chamber of Commerce) had decided to hold a pep rally to remind all Midlanders that we are strong and that we will overcome. That odd person was my mother. I was reading about the Silver Fox rallying my hometown from Central London.

As her granddaughter Joanie once said, “Grandmommy is good at life”.

At our camp, we have a 3 year high school leadership program. The ultimate goal of the program is for every young person to write a mission statement that will guide them for the rest of their lives. We deeply believe that the world needs people who live intentionally and such mission statements make this more possible.

The Silver Fox did not formally write one, but her life choices made hers clear:

She has passed it to us – the beneficiaries of her legacy.

So I leave you with this inspiration in her memory – the world feels like it’s becomea poorer place without mommy, but it does not have to be. We can each choose happiness. We can each commit to a cause and serve it without or getting credit. If each of us commits to being a bit more like the Silver Fox for one hour each day, that would be the greatest honor we could do her. She would want us tolive in a better world than she left.

Nothing would bring her more joy.

Just don’t give her the credit for it.