The Epic Tale of Camp Rampions 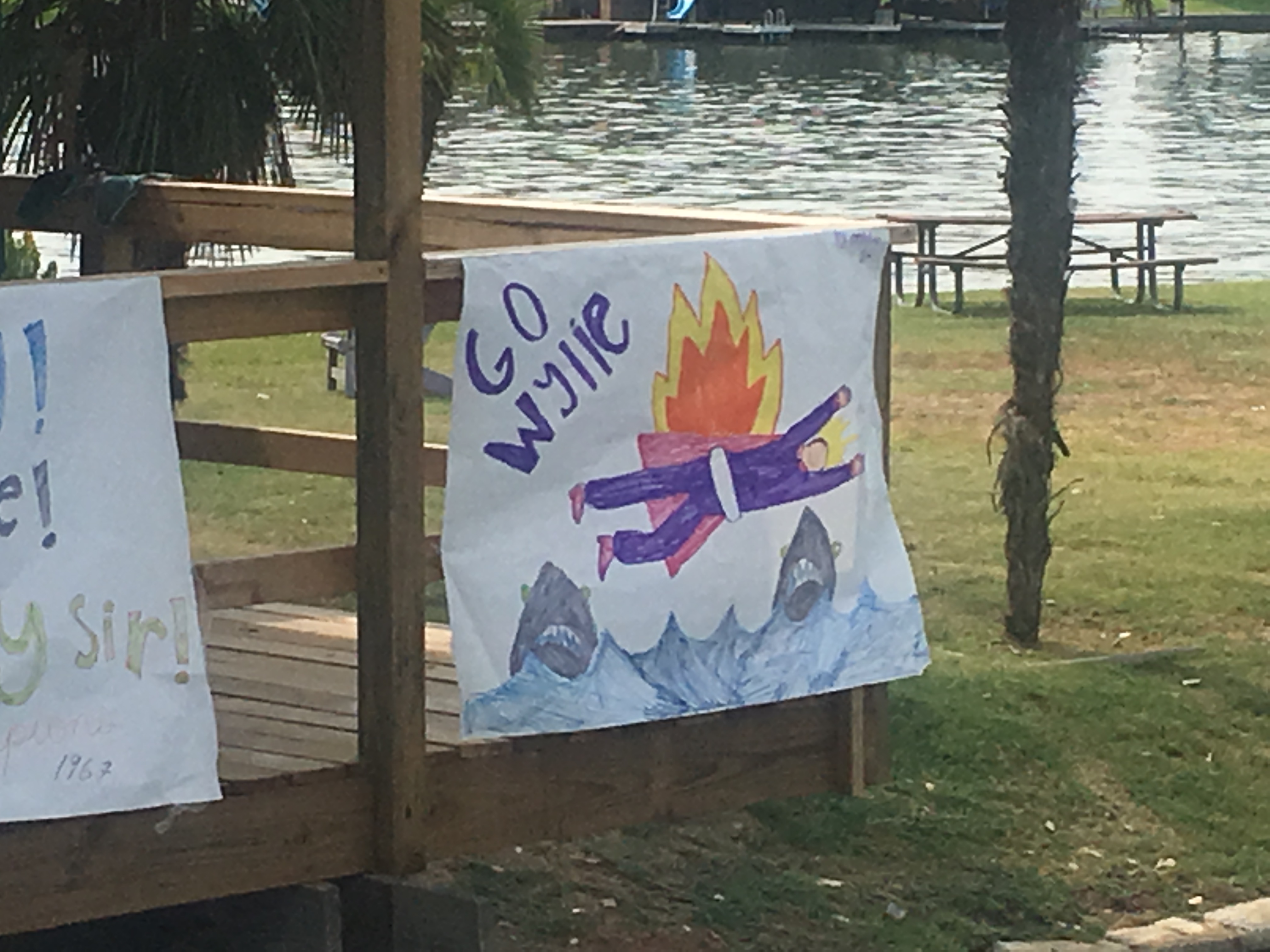 This week, I got confirmation that we are having a particularly great summer. The last session of the summer has always been one of my favorites. Counselors are at their highest level of skill and experience. They are also aware of the fact that camp will soon end, so that are savoring their last couple of weeks. The campers benefit mightily from this combination of skill and passion.

But I usually do not see entirely new ideas arise at the end of the summer. Typically, we have practiced every major special event at least once by then. This means that they go smoothly, which is great. Also, I certainly do not expect counselors to create new programming at the summer’s end.

For these reasons, Camp Rampions was such a delightful surprise.

Camp Rampions was an act of whimsy and silliness on a grand scale. Our leadership team devised and executed the entire event. Please let me describe it to you.

The bike, however, would not be a motorbike, but a simple bicycle.

Over the week, each day brought new announcements of the pending spectacle. 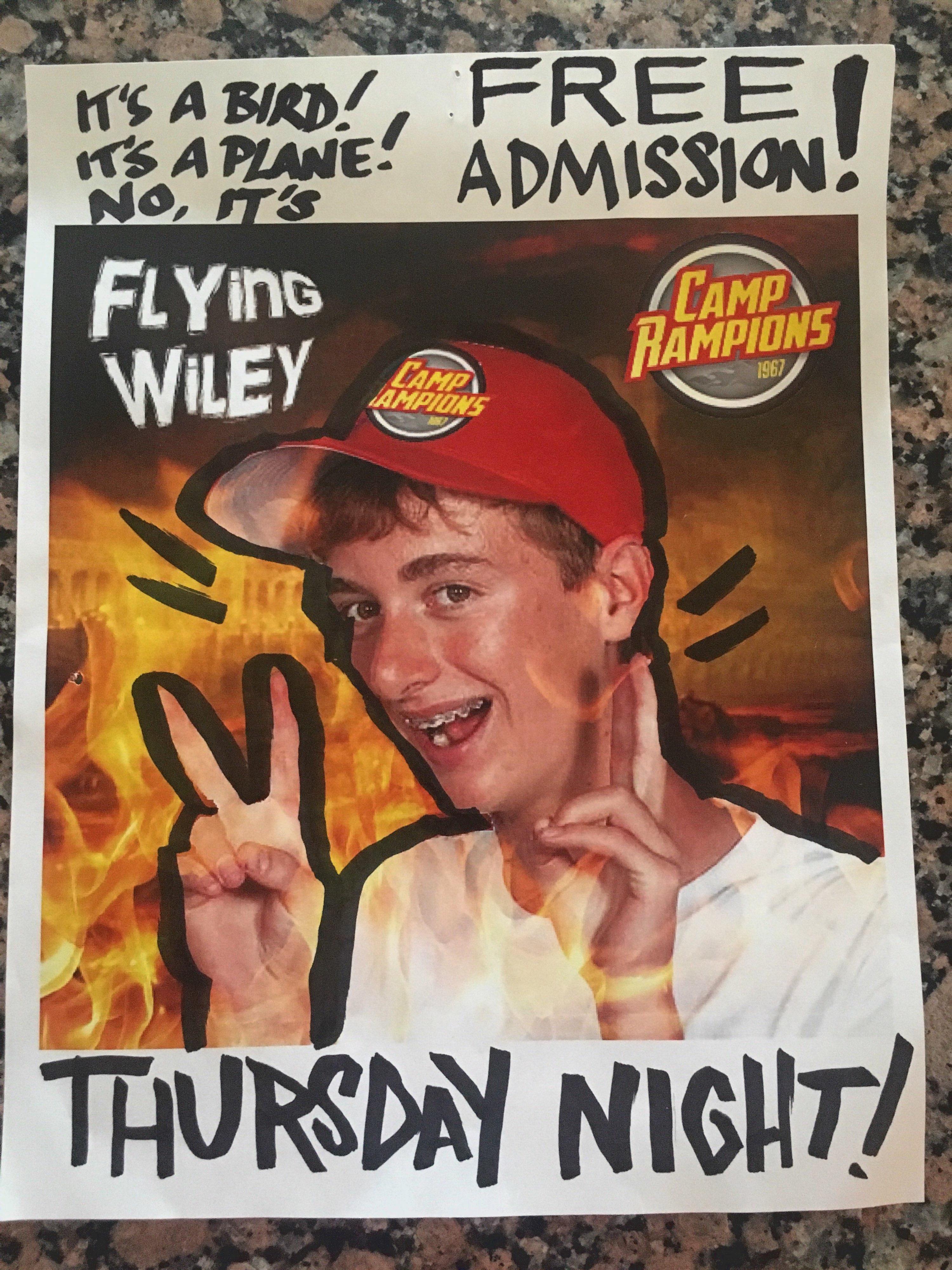 Senior Campers rewrote camp songs, replacing the word “Camp” with “Ramp” and “Champions” with “Rampions” and sang them every chance they had. 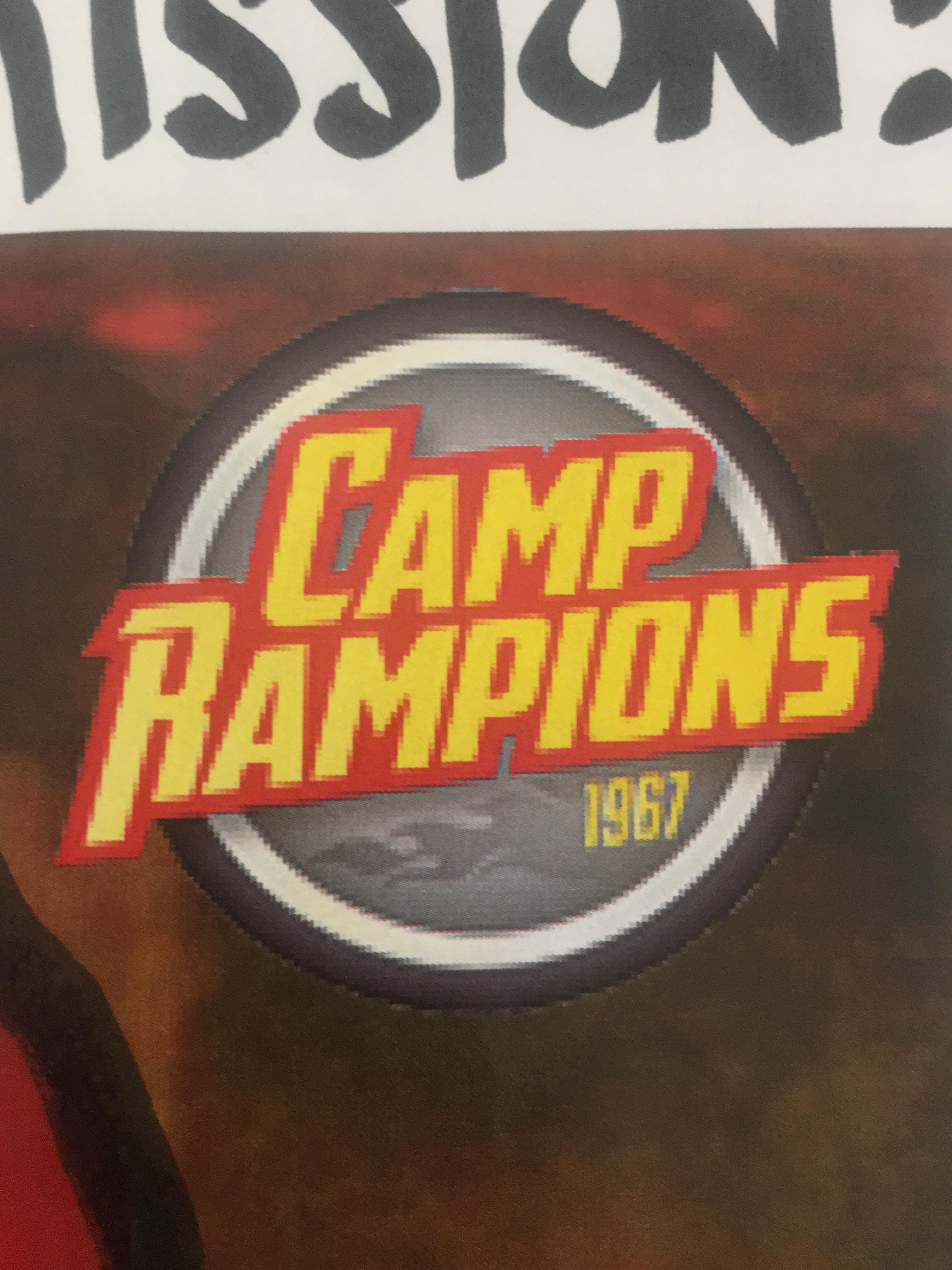 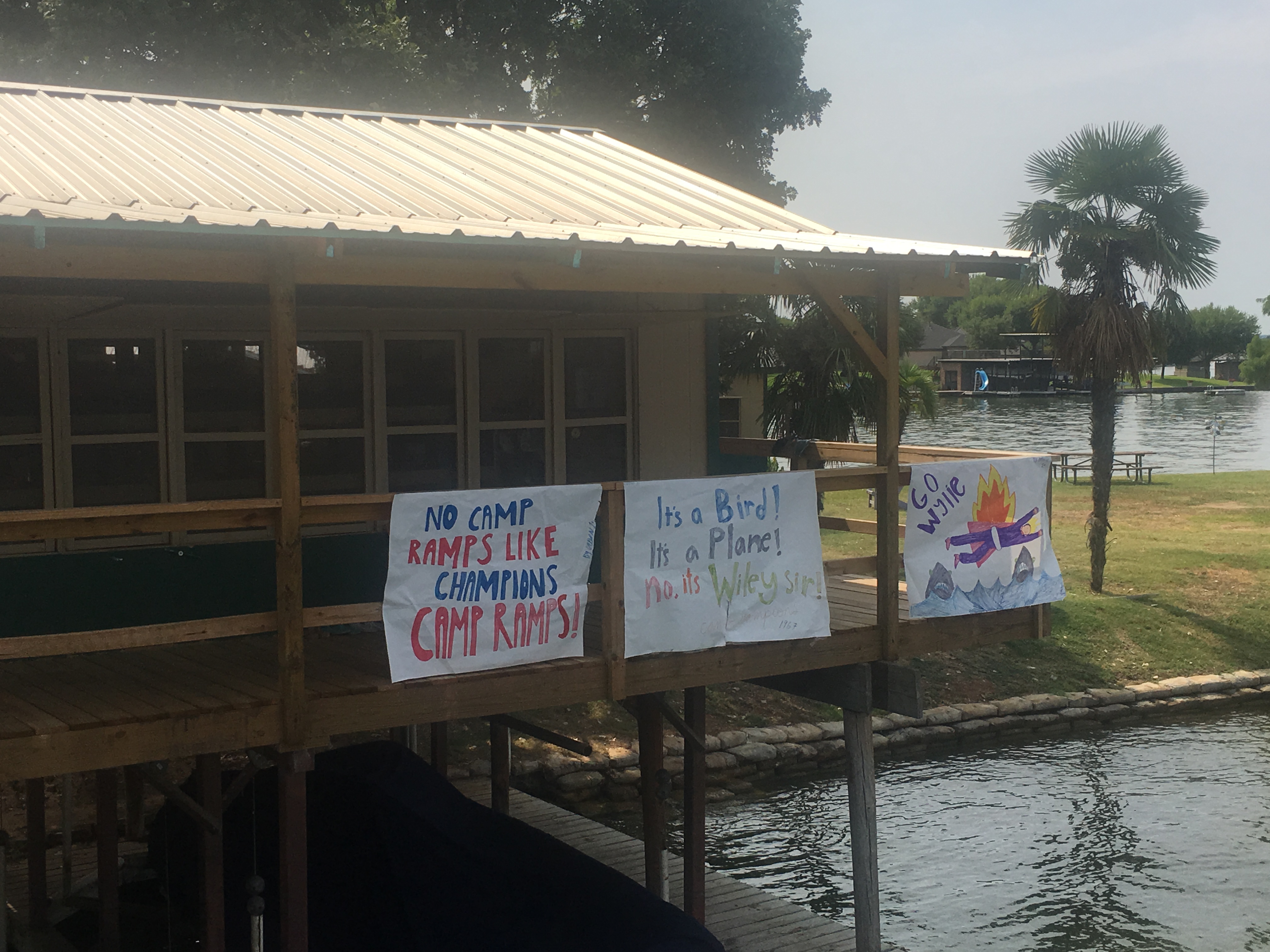 Last night was the night of the jump.

But it was more than a jump. It started with a dramatic entrance involving paint powder canons. 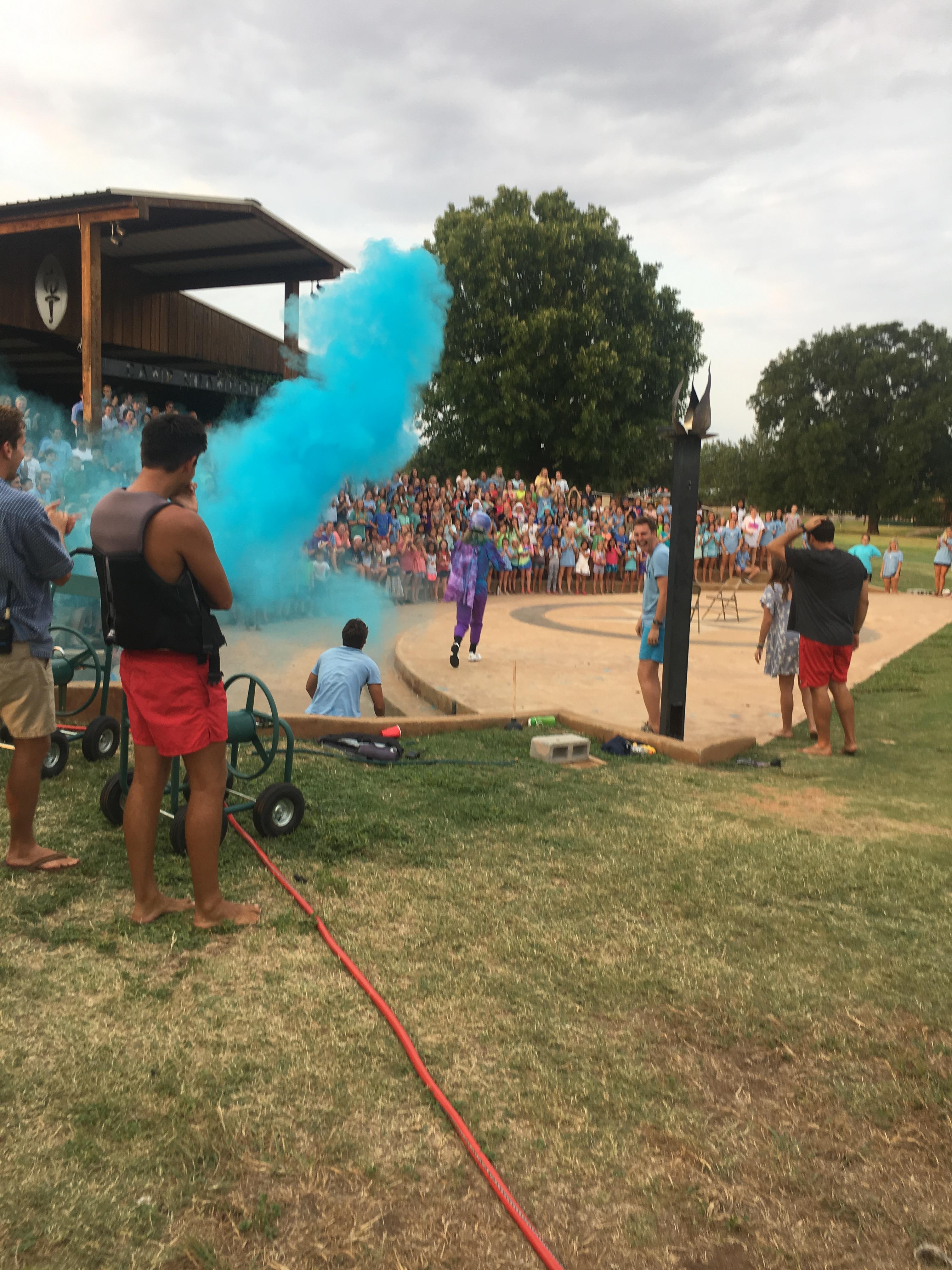 Here he is entering.  As you can see, the paint canon overachieved. 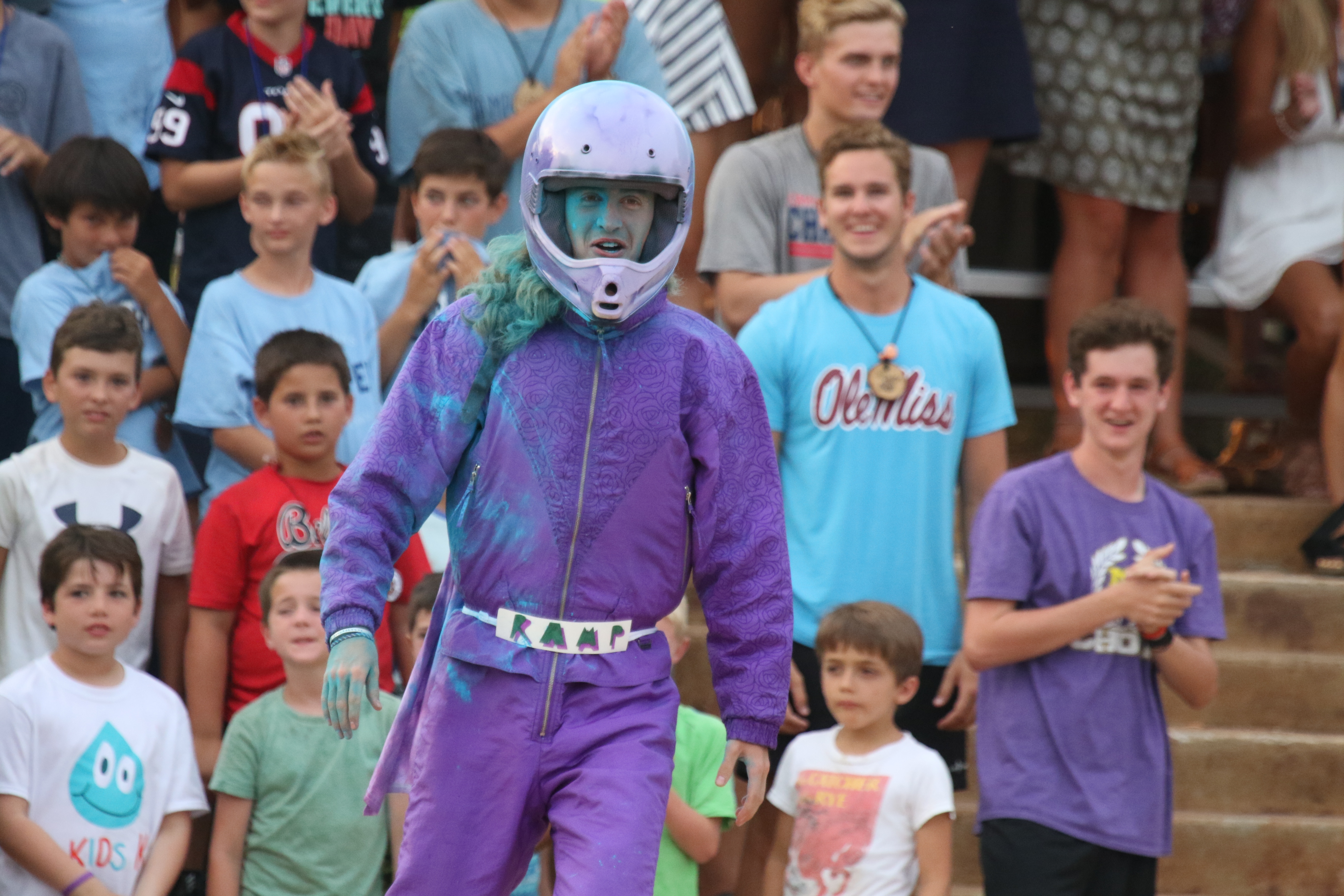 It then included ESPN-style interviews from 3 separate roving reporters. 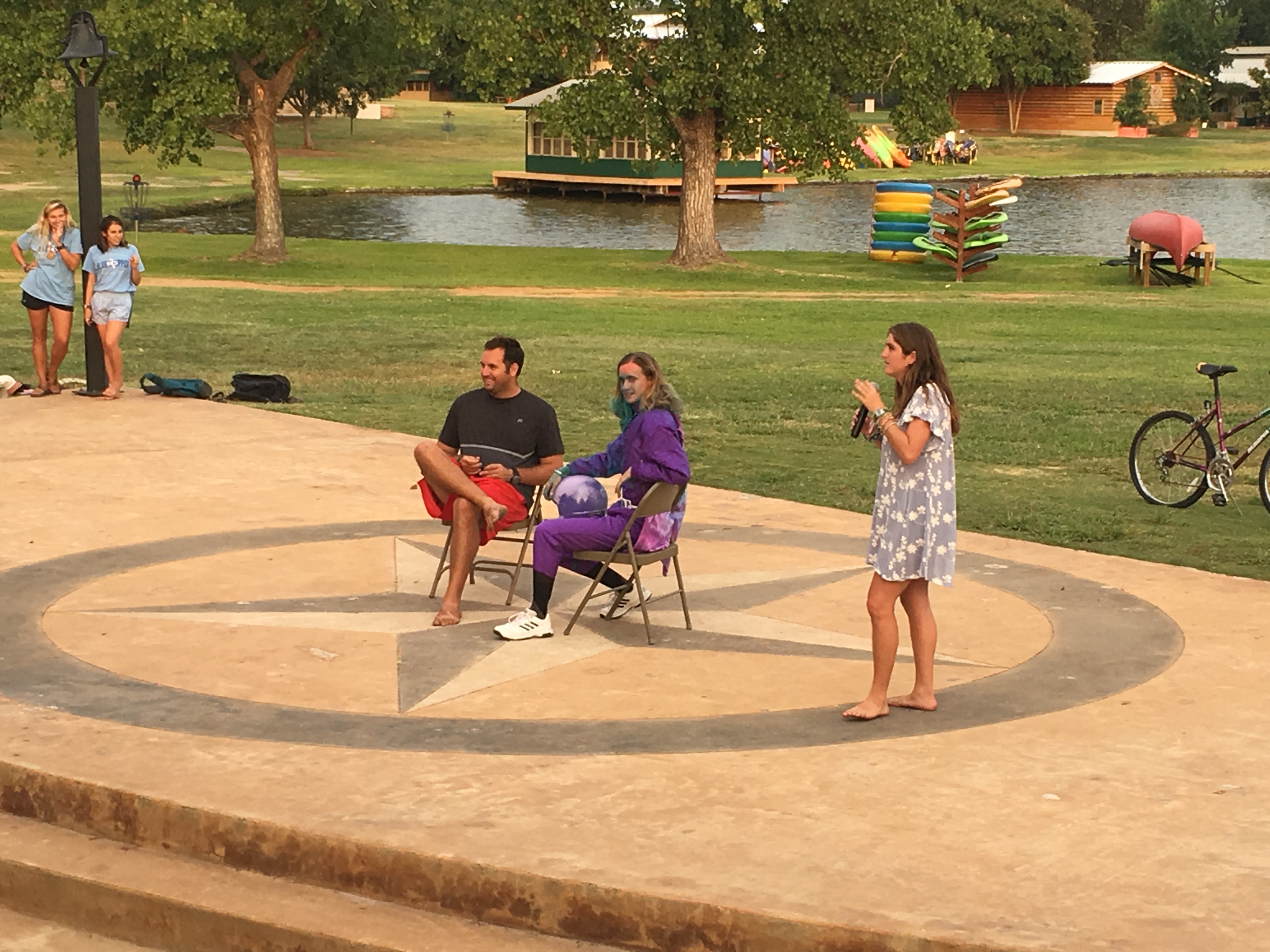 We discussed the possibility of a book deal and movie rights. Interviews included Wiley Sir and the ramp designer. We analyzed wind direction as well as the affects of temperature on air resistance. Over the PA, we had dramatic music for the introduction and procession to the start of the run, including “The Final Countdown” and “Tom Sawyer” from Rush. Prior to the jump, we lit fireworks as he walked through our smoke machine.

The campers hurried from the Coliseum to the water’s edge to get the best possible view.

He began to pedal to cheers. He approached the ramp. . . 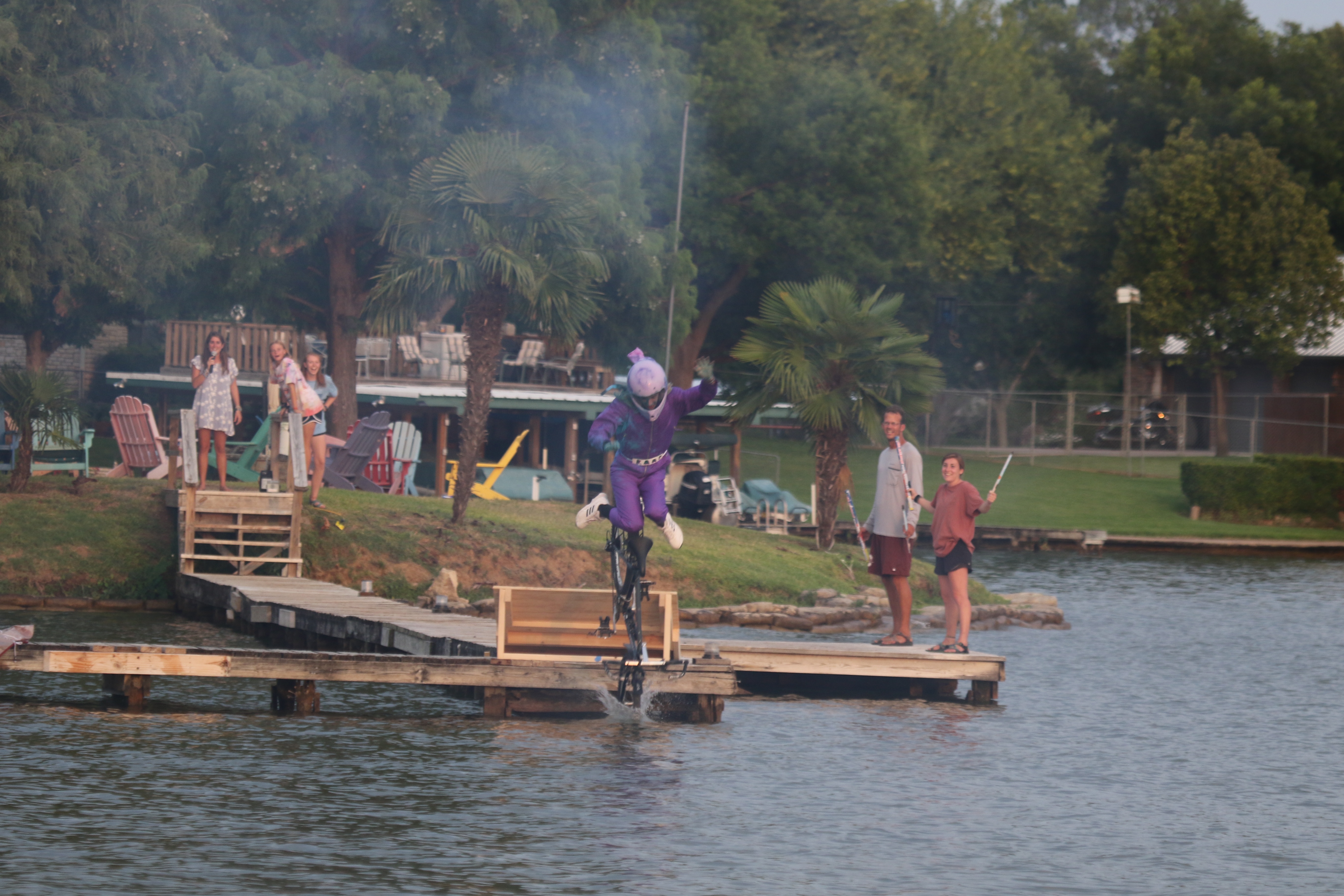 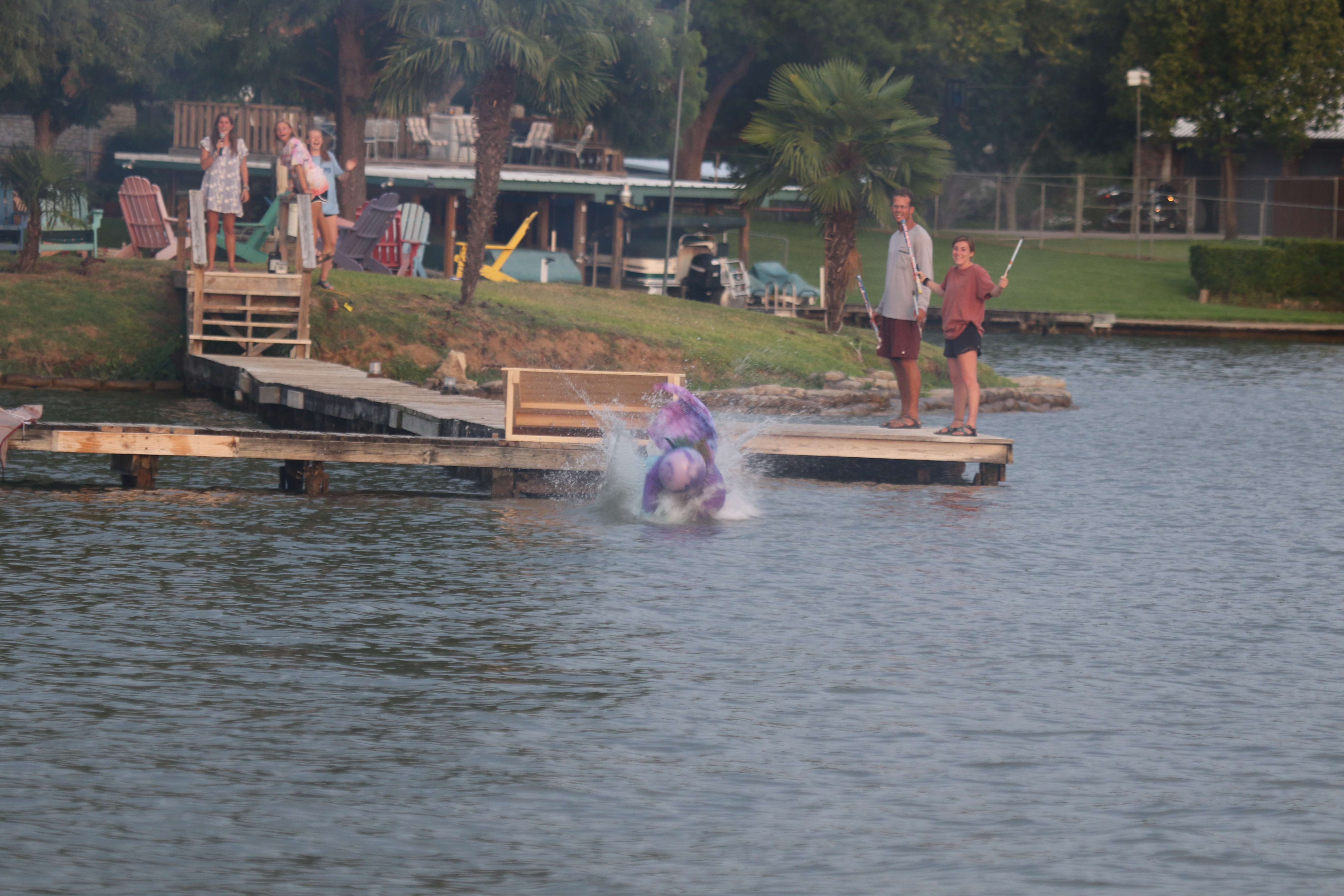 Once he emerged safely to the water’s surface, he swam the remaining distance to the theme song of “Chariots of Fire”. Upon arrival, we hoisted him onto shoulders and cheered. 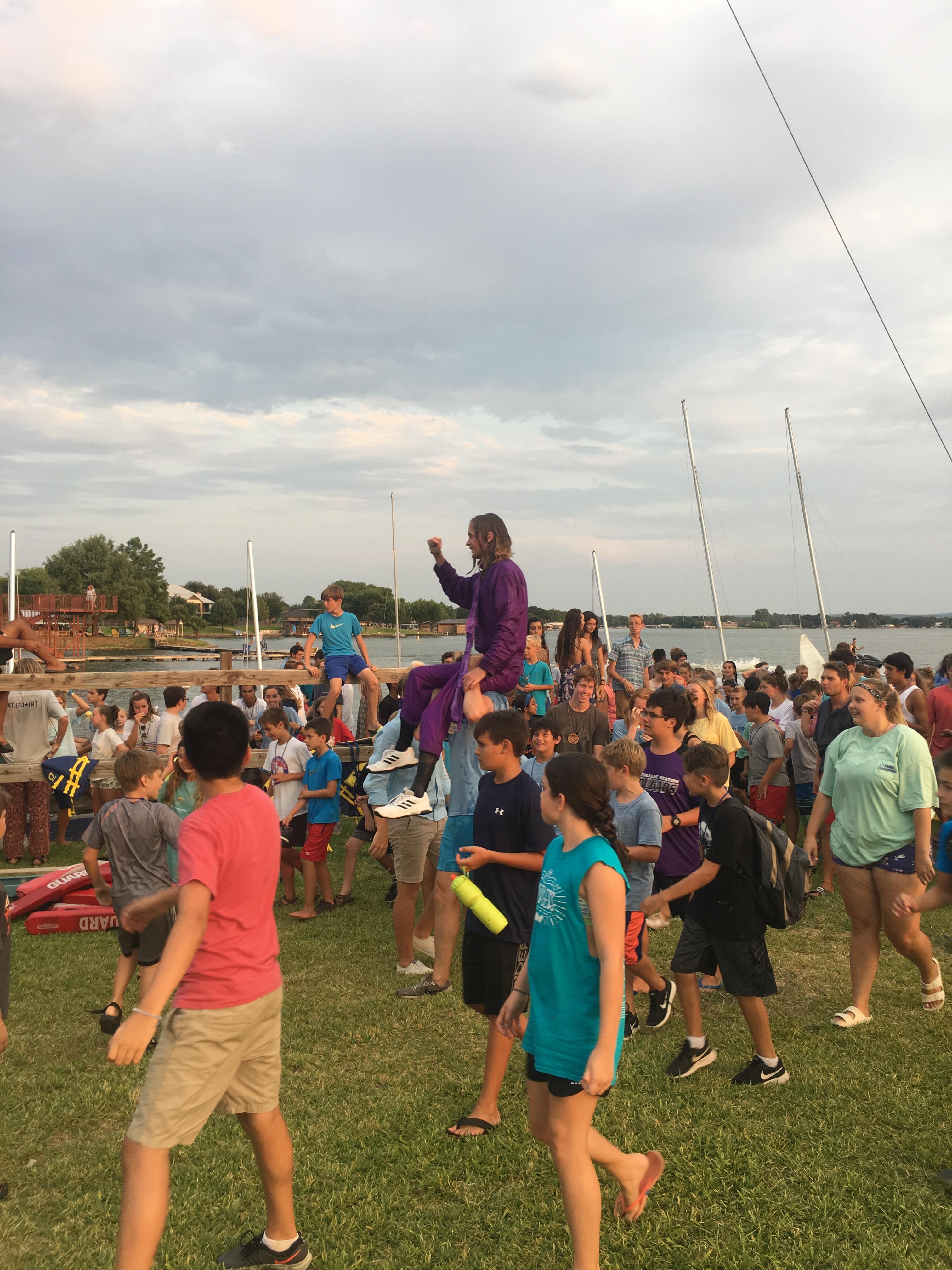 We also began to “spin” the event slightly. The Senior Campers and many of the counselors all agreed that “he almost made it” and “a sudden shift in wind was probably the reason”. Several of us claimed to have been splashed by the landing.

To our delight, everyone found it absolutely as amusing as I did. I had wondered if the youngest campers might be disappointed that it was not a legitimate X-Games type jump. But I was wrong. They all saw the humor and fun in the jump.

In short, it was great bonus fun for the end of the summer.

PS Please compare these two images. If you just add flames and two sharks, I think the poster was a perfect predictor of the action.