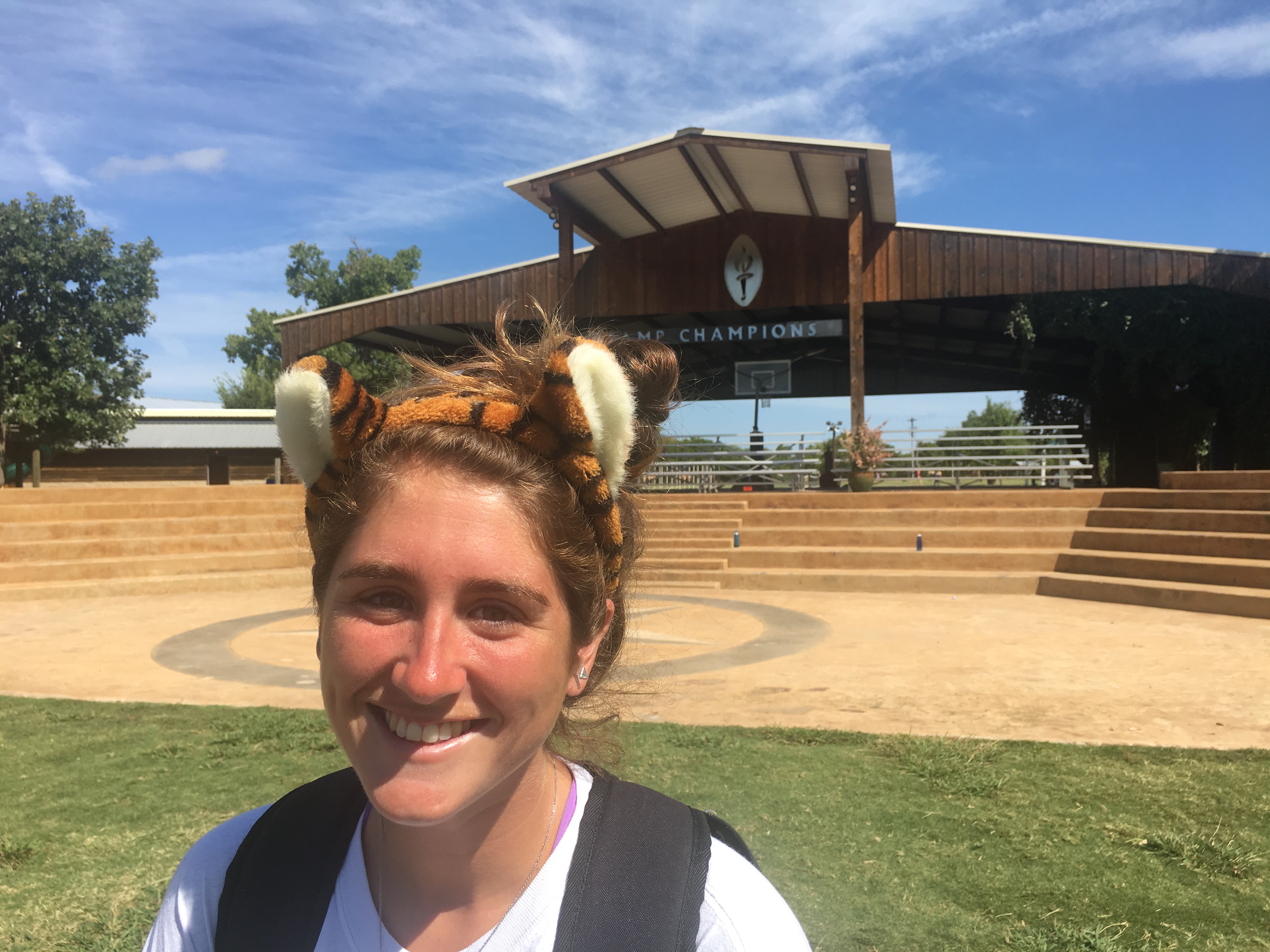 Our Girls’ Senior Camper Division leader, Meredith Ma’am, asked me if she could contribute a “guest blog” and shared the article below. You can see why we love having her as a leader at camp.

In May, I came to Lake LBJ in Marble Falls to work at my favorite place in the world. In the past, my summer jobs here haven’t felt the same weight that most “jobs” might have on people. However, after graduating from college and dealing with my own personal ups and downs, I came to my camp job teary-eyed, anxious, and honestly tragic in many ways. I was not okay with that fact that I couldn’t get myself into my normal weightless self that I usually am at camp. Now I am writing this with less than a week left in a twelve-week summer and I can definitely say that I am still not my normal camp self. Camp is as special as ever, but I have been doing a balancing act between camp world and the newly graduated adult world while I am here.

Luckily for anyone reading, this post is not to explain that I don’t have a career lined up when I finish my job here at camp. It also isn’t to write about the thought processes (or lack thereof) about what kind of job I even want to have. This post is to recognize the fact that I don’t know what my future specifically brings, and therefore I don’t know if I will be spending another summer at my favorite place. So, I am going to commemorate yet another amazing, priceless, and especially magical summer at camp (and embrace the inevitable, teary nostalgia in the best way I know how).

Here’s a list of magical memories from my summer at camp:

Getting to be Mandy

Mandy was my alter ego during my first term of camp this summer. This is because one night I decided to put on my blue wig for absolutely no reason and my oldest campers declared that it was my carefree alter ego (who also looks like a character from an anime series) named Mandy. Mandy weirdly helped me bond with some of my favorite campers this summer. Mandy and I got to know the girls pictured here more this summer and I was able to focus my energy on learning about them, who they aspire to be, and finally being my carefree camp self that I usually see at camp each summer.

I don’t always consider myself a very creative person due to the fact that I can’t draw, paint, design my own clothes, or play an instrument super well. But, my friends and I successfully created Stacy from Starbucks during second term. We convinced campers that we had a camp Starbucks franchise in our small apartment and one of our roommates was the barista, Stacy. We then had my new camp BFF, Emily who worked in the office, wear a Starbucks uniform to flag raising and answer any questions that campers may have about barista life. I think it was only funny for us?

Brett, my camp twin and best friend, and I had the mission of defending the large inflatable in the middle of the lake, the Summit, from fiery debris during the fireworks show. The fireworks show is magical for the entire camp. Everyone sits together singing and dancing to their favorite songs with fireworks shooting off in the best night sky. For Brett and I, the fireworks show was magical because it started with us jumping off the 20-foot high glob tower into the lake while holding water gun weapons and wearing our bullet-proof life jackets. Then, we went against the clock to try to get on the summit to shoot water at the potential fire. It took us a full twenty minutes to successfully get on the Summit because we both fell off and slid off multiple times. The magic was in the ridiculous amount of laughter, the fact that no one could see us struggle, and getting to watch the fireworks shoot directly over our heads at one of our favorite places in the world.

Lost and found haunts my dreams on a regular basis at camp. Sorting through mountains of lost items from campers seems to be an impossible task for the senior campers and me to overcome most days. However, one day in the midst of trying to sort through lost and found with 15-year-old guys and girls, we decided to have a lost and found fashion show. I was definitely the most entertained by one of the girls wearing a nine-year-old boy’s dinosaur wetsuit.

Lola is the most popular person at camp. Lola’s mom and dad are awesome people and both are directors at camp. Her mom is the Girl’s Camp Director at our camp, one of my biggest role models in life, and now luckily one of my favorite camp friends. Lola is two and a half and fills me up with so much joy and love. Watching her grow and learn about herself and everything that goes on at camp is unreal. I am by no means Lola’s favorite person at camp but she is definitely mine. Every time we jump in puddles together, clean up our plates at meals, do tattoos, or when she says, “Hi Mereth,” I want to cry. She is hilarious, brave, and full of love.

My Birthday in July

I had a spontaneous surprise party on a random night during 3rd term. I had told Brett that day that I was really struggling with my anxiety about life and the real world and I felt like it was taking over my ability to be present at camp with my campers. That night after karaoke, I was told that someone, “fell on their head in the abandoned cabin,” and to go immediately. My mind was filled with useless medical thoughts about how I would attempt to address a possible concussion. But, then I was greeted with all 50 of my campers, my counselors, and Brett with a surprise party for me. I have never felt so much love through words they wrote for me on cards and through a cookie cake that said: “we heart Mer.” I am still not entirely sure how I got so lucky to receive such love, but regardless, I needed it. In other words, I don’t really need a 23rd birthday party this year.

This summer, we tried to say yes to everything to bring more magic back to camp. Even with my personal ups and downs, I think the summer of the yes was a success story. After this summer, I am grateful that I have gotten to know so many young women who show me what it means to be a strong woman in our society. I was brought joy from the younger campers that I barely speak to who still come up and give me hugs and tell me hilarious stories from their days. I felt honored every time I was incorrectly called “Brett Ma’am.” I laughed harder than I laugh anywhere else with the hilarious people I work with. I may be unemployed, trolling Linked In, Venmo requesting my working friends for a dollar, and wondering how to become a famous blogger when I leave camp, but for at least a few more days I get to be funemployed.