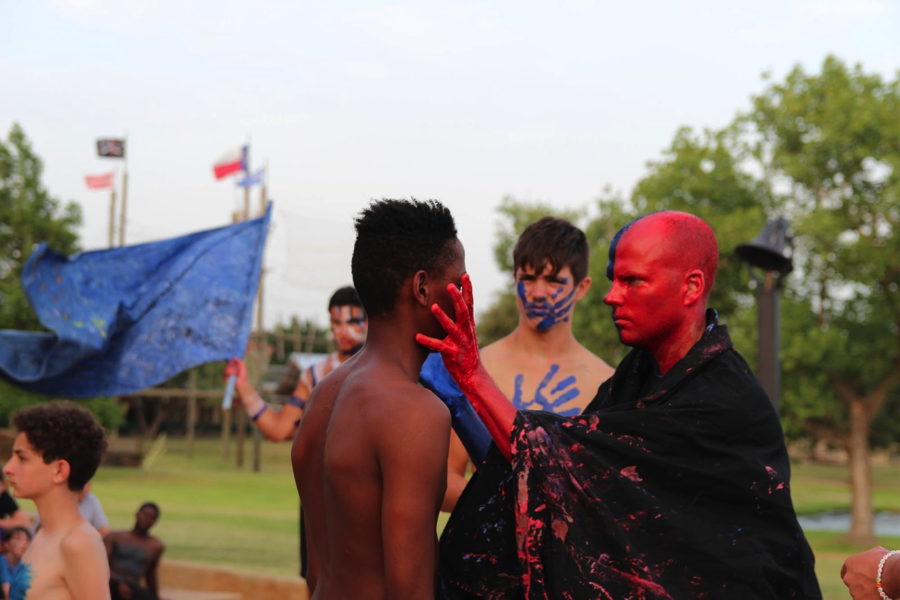 During orientation, I like to explain to the counselors that camp is a magic show and that they are the magicians. We can take something rather mundane and make it something memorable.

One of the best examples of this magic show is the Trojan/Spartan initiation ceremony. Once a week, we have competitions for 2-3 hours between our two tribes: the Trojans (blue) and the Spartans (red). The games are often silly, but the campers appreciate their membership within their tribe.

Once a camper is in a tribe, that tribe will be his or hers “for life”. [Note: I find the “for life” language amusing. To my knowledge, no 35 year-olds are continuing any active competition with the opposing tribe, but we declare that membership remains with you nonetheless.]

The campers learn their allegiance during the Trojan/Spartan initiation ceremony, which happened last night.

In order to make my point that camp is a magic show, please allow me to describe the boys’ ceremony twice – once as the campers experience it and once as an anthropologist might see it.

The new campers sit together 150 feet away from the Coliseum as they hear majestic music and watch as each team (painted red or blue) marches into the seating area. Once they are seated, the new campers file over to more majestic – even ominous – music to form a long line, youngest to oldest.

One-by-one, an officiate calls each campers’ name. Each camper then descends the stairs as a drums beats. He stands before the Selector, a figure that is half red and half blue wrapped in a black cape.

After a pause, the Selector paints the initiates face with paint – blue for Trojan and red for Spartan. The newly minted Trojan or Spartan is then escorted to his seat while his entire tribe emits a chant.

After every camper is initiated, an elder dressed in white reads the Trojan-Spartan Legend (Trojan Horse, Paris, Menalaus, etc) and then extols the campers to become proud members of their tribe. The elder also stresses that the games as a place for sportsmanship and dignity. Finally, he reminds them that once the games are over and they return to their cabins, they are not Trojans or Spartans, but brothers and Champions once again.

The two teams then retreat to their separate fires and learn their team chants.

Somewhere in Central Texas, a bunch of guys are covering themselves in paint. Roughly half are painted red while the other half is white.

One poor dude is completely covered in paint, half red and half blue. That looks really uncomfortable.

These young people walk into a central seating area while music plays over a loud speaker. An observant anthropologist will notice that the music is from “Last of the Mohicans”. She will wonder why. She will not be able to produce any answer.

A third group of young people will then walk to the seating area. They are devoid of paint. As they walk, the music is now from a Lord of the Rings movie. This only adds to her confusion.

For the next 20 minutes, each of the unpainted youths will walk forward and get painted by the double-painted dude. Once everyone is painted, a 50+ year old will walk forward and talk about the Trojan War. Our anthropologist is now thoroughly confused. Is this performance art? What does Last of the Mohicans or Frodo have to do with any of this? Why would older person want to put white stripes on his face and read about Menalaus. Perhaps he needs medication.

If that were not odd enough, everyone now seem to believe that they are members of an ancient Greek city-state.

Our observer would alternate between confusion and amusement. She, however, will not think that this ceremony was particularly moving.

But she does not have to, the campers do.

Our audience was the campers and the magicians were in full force last night. For the campers, these 45 minutes were powerful, perhaps even majestic. The paint and the music and the costumes do not make the ceremony work, the counselors and the staff make that happen.

So last night, your sons (and your daughters at the girls’ initiation ceremony) were not modern citizens, but were instead ancient Hellenic warriors, ready for the next challenge.