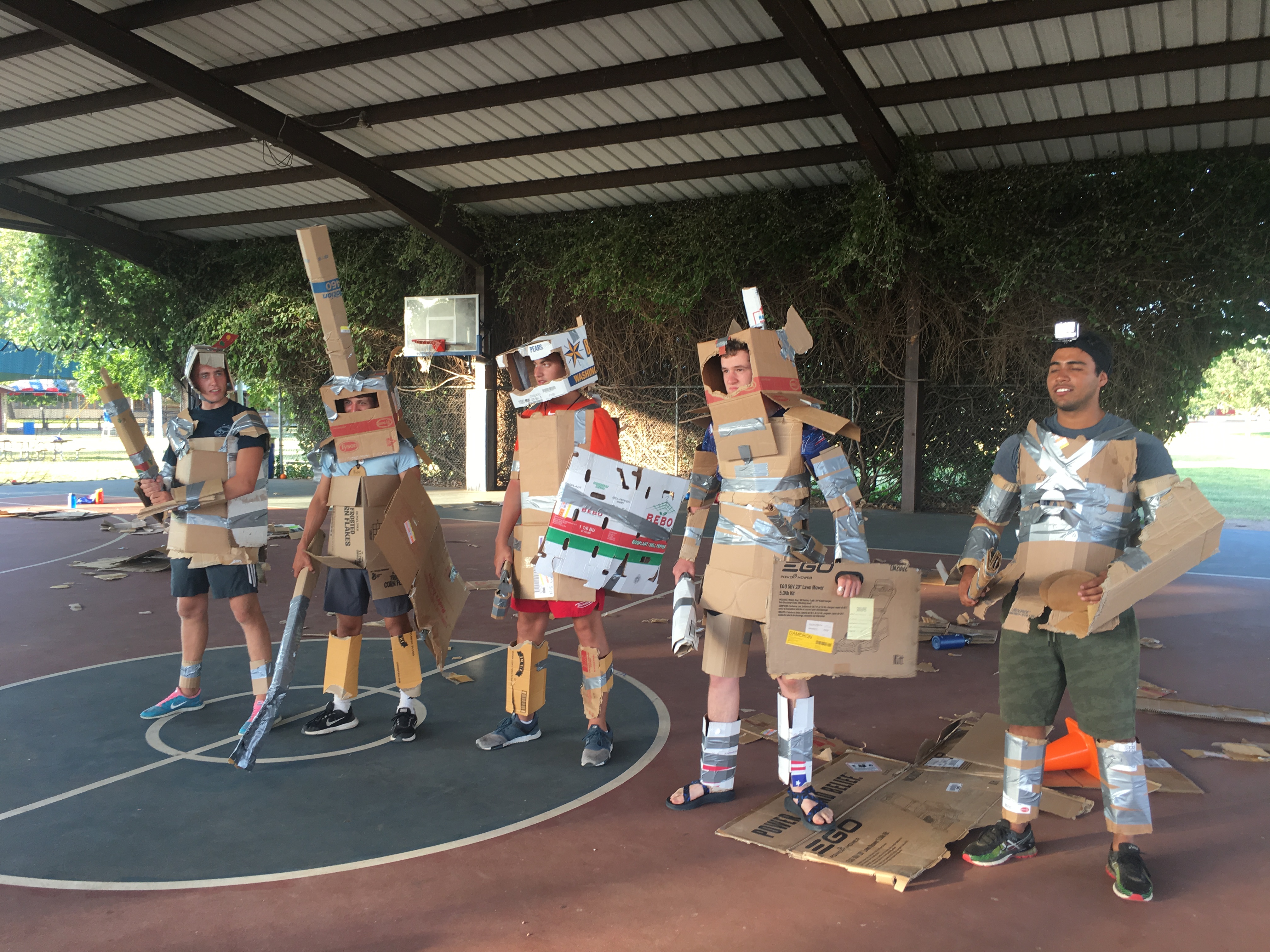 Last night, each division (group of 4-6 cabins organized by gender and age) had a special activity. For example, the youngest girls had a “spa day” complete with cucumbers on eyes and amateur pedicures. Some of the Minis were so enamored or their green “cleansing” facial masks, that they wore them to torchlight, effectively creating the illusion that tiny zombies were among us.

The next oldest girls (the Midis) had “Paint Twister”, during which campers played twister on butcher paper with wet paint. This ends up being quite messy, but even more fun.

The oldest boys and girls (Maxis and Aquanauts) had a pool party. These are the campers who just finished 6th-8thgrade. They appreciated the mellow aspect of the pool and its coolness.

OK, if you thought that “Paint Twister” might get messy, you should have seen “Human Sundaes” with the Rookies (boys who just finished k-3rd grade). 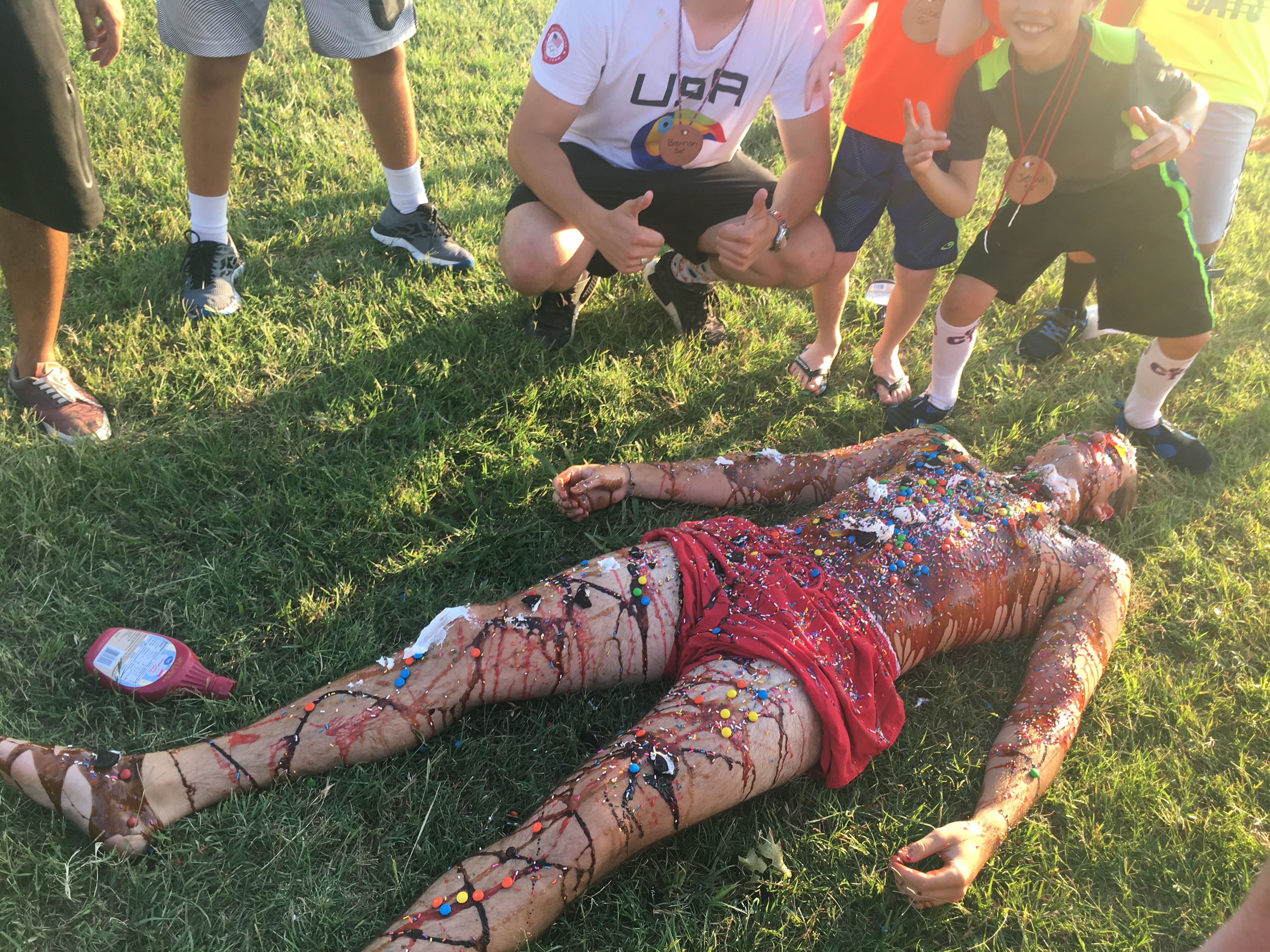 They had counselors lay on the ground and then proceeded to make them into, well, human sundaes complete with chocolate syrups, gummy worms, sprinkles and whipped cream. It is events like this that show me how much our counselors care about our campers. I can assure you that no one wakes up in the morning thinking “hey, I would love to be covered in Sundae toppings later today”, yet they embrace these activities because they bring such joy to the campers.

I spent most of my time with the Lettermen (the boys who finished 4thand 5thgrade).

Each cabin had 20 minutes to make one of their counselors into a robot using cardboard and duct tape. These robots (“bots”) would then go through three separate tests. 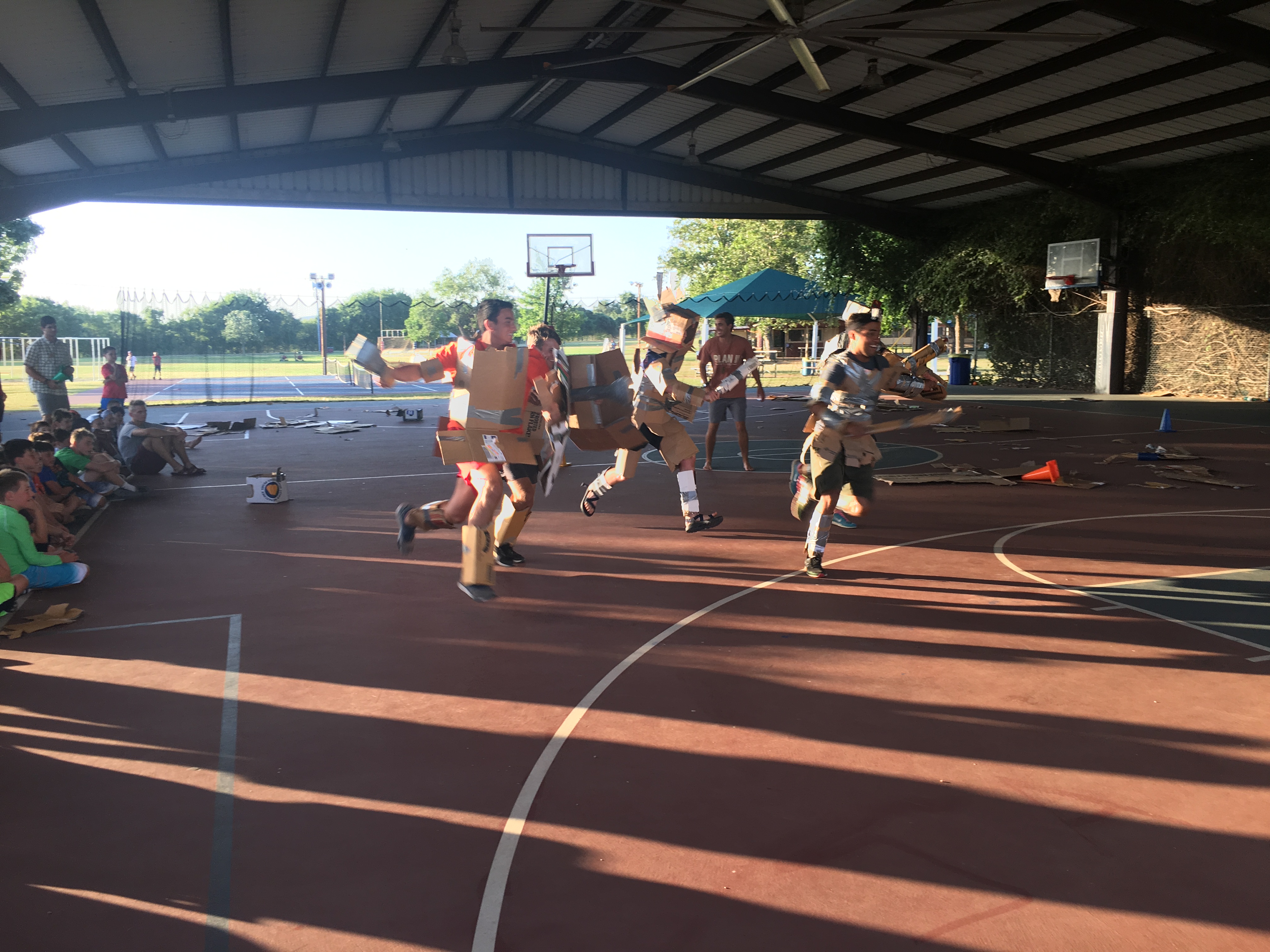 The first was a speed test in which they had to run two laps in full Bot regalia. Use of robot weapons was allowed. [Note: an “axe” made of cardboard and duct tape looks mighty impressive and makes an impressive sound when it hits other cardboard, but it can inflict essentially no damage. Since the robots could not swing at anyone’s head, all “weapons” simply managed to add some audible excitement.] 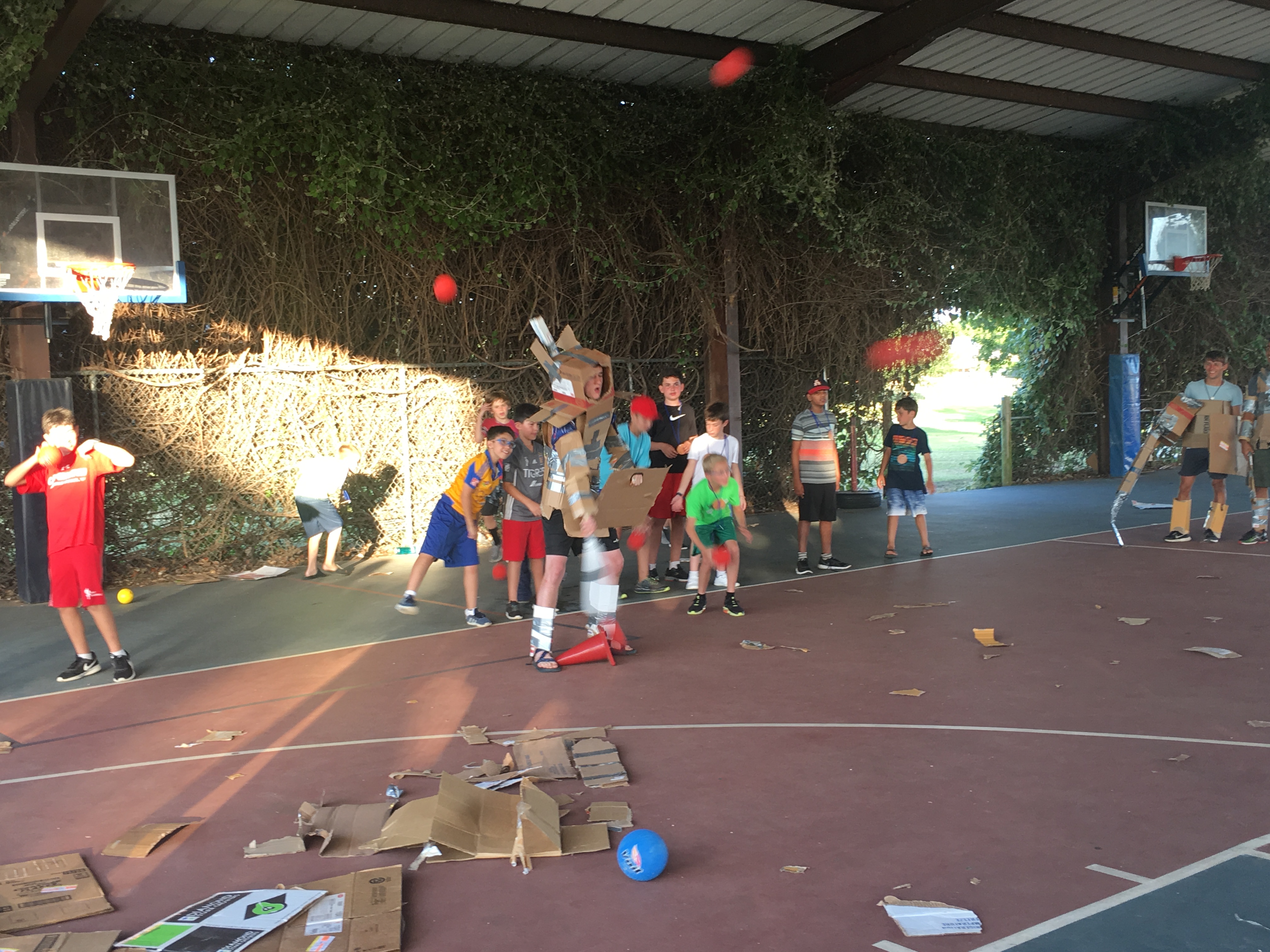 The second test was dexterity. In this test, campers threw balls at the robots as they attempted to avoid or deflect them. The robot with the fewest direct hits would win. Once again, no robots were hurt in the making of this activity. The campers were too far away (and too young) to generate enough velocity to pose a threat to our mechanical warriors. The robots managed to parley all balls away until the campers learned the winning technique: sending 5-6 balls to the robot at the same time. 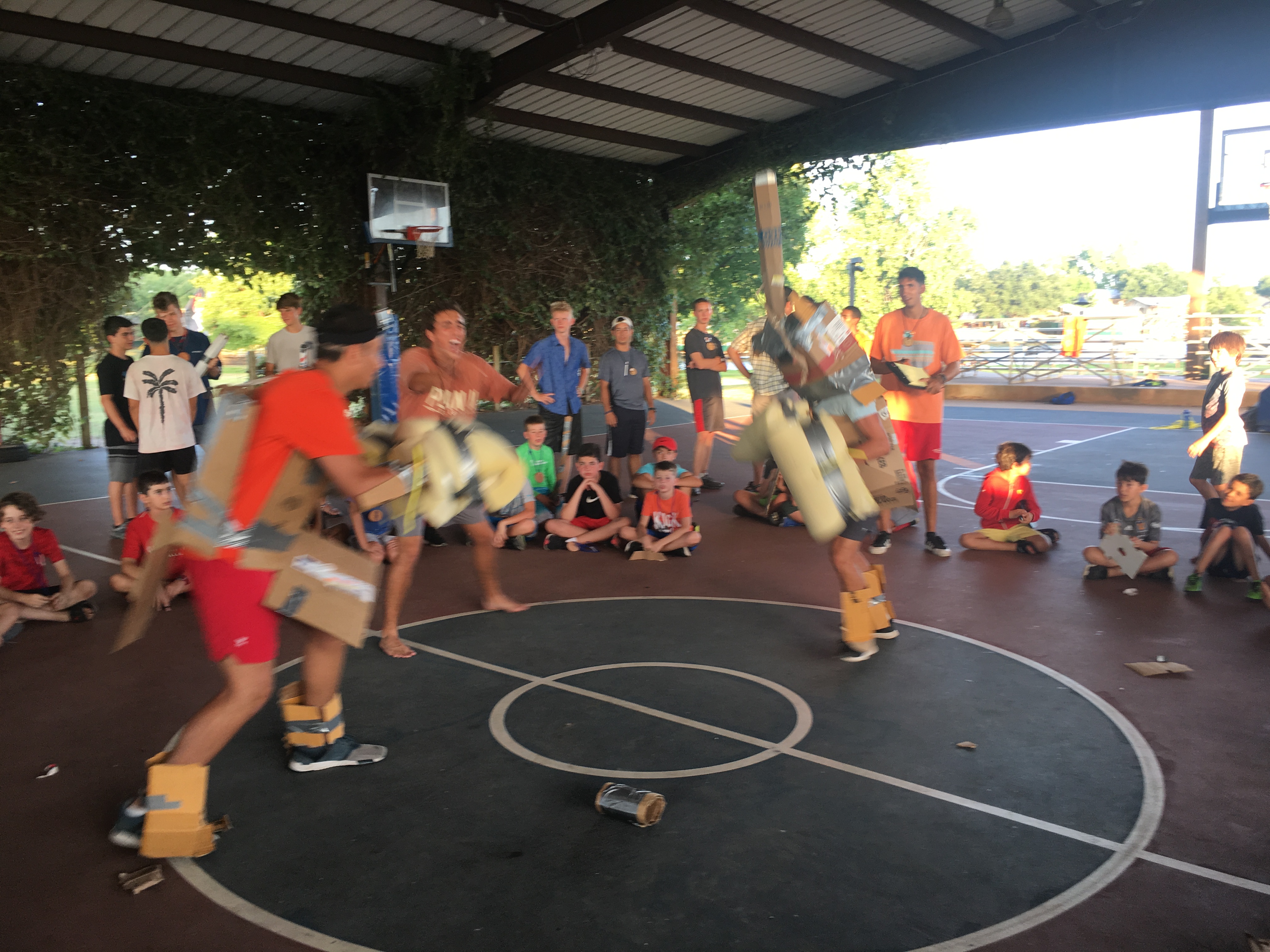 The final test was like a “Rock ‘Em, Sock ‘Em Robots”. We gave the Bots “gloves” made of huge wads of foam and instructed them to use the gloves to remove the armor (cardboard) of their opponent. Once again, we did not allow any head shots. The site of two grown men using foam gloves (2 foot by 1 foot) to remove cardboard was wonderfully silly to me.

I share this to show you how easily a few materials (paint and butcher paper, sundae toppings, cucumbers and nail polish, cardboard and duct tape) can become so much more when combined with excellent counselors and enthusiastic campers. Each group’s activity was a perfect match for the temperament of the age group.