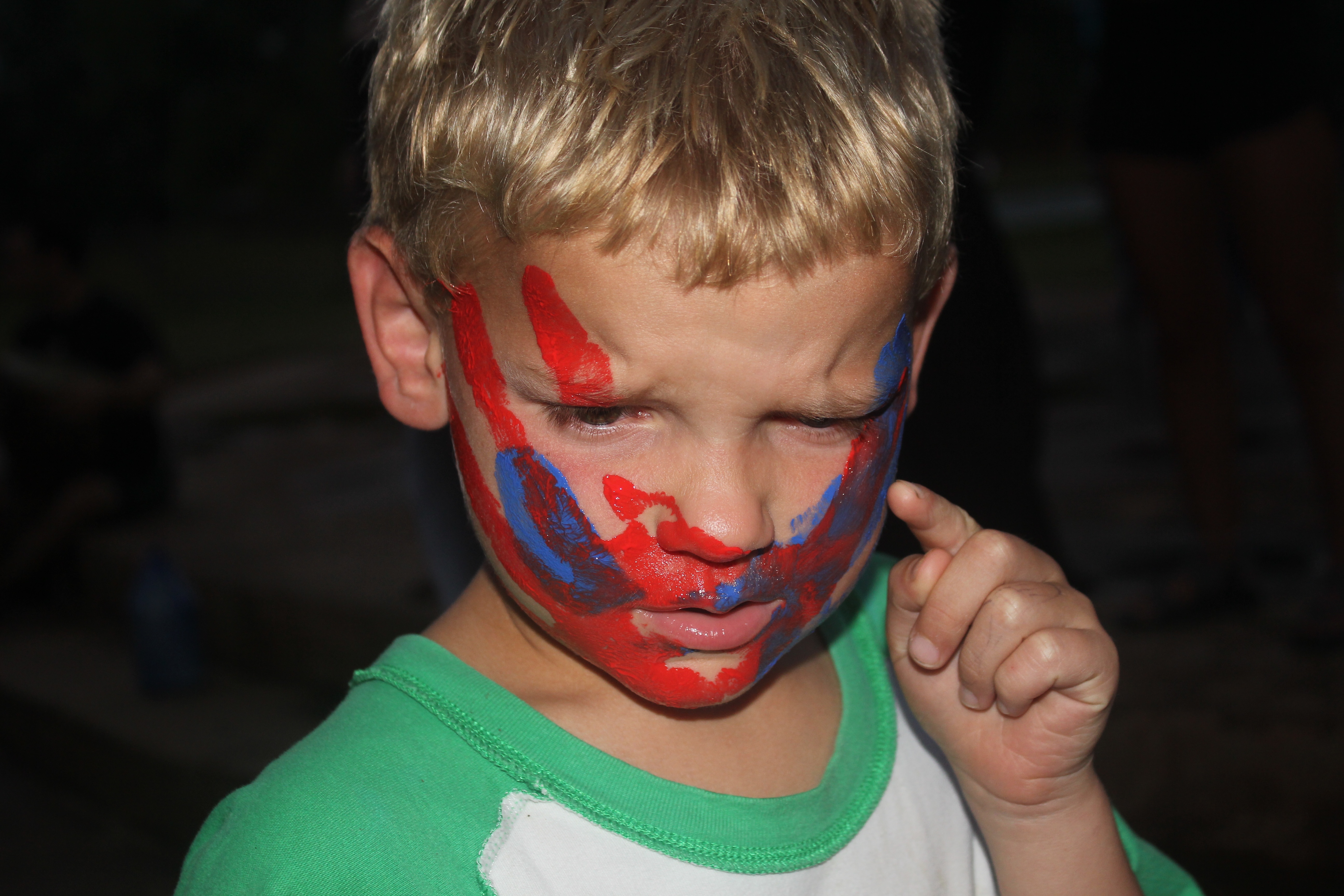 Like anyone else, sometimes we make mistakes.   We believe that part of being a Champion is being willing to admit to your mistakes.

But some mistakes need to be shared.

Earlier this week, I described Trojan-Spartan initiation. What I might not have mentioned is that once you are a Trojan or a Spartan, you are on that team “for life”. I have had a Super Bowl MVP and a Grammy nominee tell me their team affiliation – and each used the present tense, “I am a Trojan” and “I am a Spartan”.

As a result, we strive to make the initiation seem serious and immutable.

That makes what happened Saturday night even more amusing.

Before I go farther, please know that we checked with our camper’s parents to make sure they were willing to have me include this story.

During the ceremony, each initiate walks up to the Chooser (the director painted half-blue and half-red who will mark each person) and is painted in the color of his or her new tribe. Trojans are blue. Spartans are red.  I shared this picture earlier, but I feel a need to give it to you again.

The Namer and the Chooser have worked out a system that enables the Chooser to paint even before the Namer states the team name.   Lets call it a psychic bond. This system has proven to be faultless.

As the youngest camper at camp walked up, he seemed a little confused. He walked to the wrong spot and needed to be redirected. He was heart-breakingly cute and clearly unsure what was going on. While helping him to the right spot, something happened. The psychic bond temporarily failed.

The Chooser reached forward with his right hand, covered in Trojan Blue, and made a handprint on the face.

As his hand connected with the camper’s left cheek, the Namer realizes that an error is happening and then finishes his declaration:

He said it in a way that was almost comically long and drawn out – as if saying it slow enough would suck the blue paint away from the camper’s face and back onto the hand of the Chooser.

The Chooser – hearing the correct team – then majestically placed his left hand, covered in Spartan Red, onto the right check of our now thoroughly confused camper. He now looks like a miniature Chooser – with both colors proudly featured on his face.

He went to sit down and proceeded to join his new tribe, now oblivious to the fact that he – and only he – bore both colors.

I think his picture says it all!

But worry not, dear readers, he is happily a Spartan now and just enjoyed he second Trojan-Spartan games.