The Majesty (and Silliness) of Trojan-Spartan Games

The Trojan-Spartan games are one of the oldest traditions at Camp Champions. Since 1967, campers have initiated into either the Trojan tribe of the Spartan tribe on the first Saturday of a session.

On the next day, the campers compete in the Trojan-Spartan games. The games include some traditional competitions (like tug-a-war) or running Tic-Tac-Toe, but also include some camp-specific games like seeing what team can get more campers on the Glob after it has been coated with dishsoap.

We strive to make the games majestic enough to appeal to our more competitive campers and silly enough to amuse our more laid back boys and girls.

From my quick walk-around, I think we found a good balance today.

But let me take you back to last night: the Trojan-Spartan initiation ceremony. If you were to be here last night, you would not have any idea what to make of this event. On one hand, it is majestic and weighty. On the other, it is patently silly.

Let me first make the argument for silly. I will describe the boys ceremony because that is the only one I have ever witnessed.

We were a group of 200+ people who have covered ourselves in paint: Spartan red, Trojan blue and some black and white mixed in as well.

One person wears a black shroud with half of his head painted red and the other blue. He is the Painter – the person that puts the red or blue paint on the newly initiated campers. We play music from Last of the Mohicans and talk about the Trojan-Spartan war (Helen, Paris, Menelaus and the Trojan Horse). Another person drums dramatically as the campers await the name of their tribe. I then make a speech while my face is painted with white stripes. 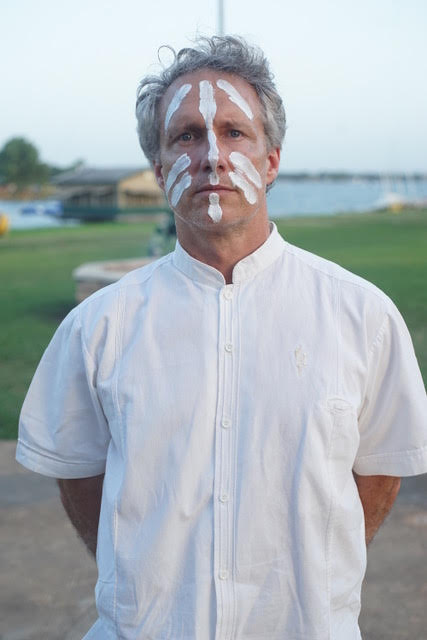 In short, we are acting like we are Hellenic warriors while standing in central Texas covered in paint.

But the ceremony can also be quite impressive. The new initiates walk through a tunnel of solemn Senior Campers holding tiki torches. The drum adds a somewhat primal element to the ceremony. The returning campers did a wonderful job of remaining silent (not an easy task for boys ages 7-17) and cheering for their new tribe-members. Our Painter seems to “know” who will be a Spartan and a Trojan before it is formally announced, whereupon, he applies the paint to the camper. My closing speech, in addition to reading the Trojan-Spartan legend, focuses on speaking about competition, sportsmanship and brotherhood. “Tomorrow, we will compete with our minds and our bodies. We will honor our competitors. But at the end of the games, we will be Trojans and Spartans no more, but will once again be cabinmates and brothers.”

In the end, I think the ceremony ends up more majestic than silly. I know the campers enjoyed it. I know that I did.