Final Thoughts on the Inca Trail 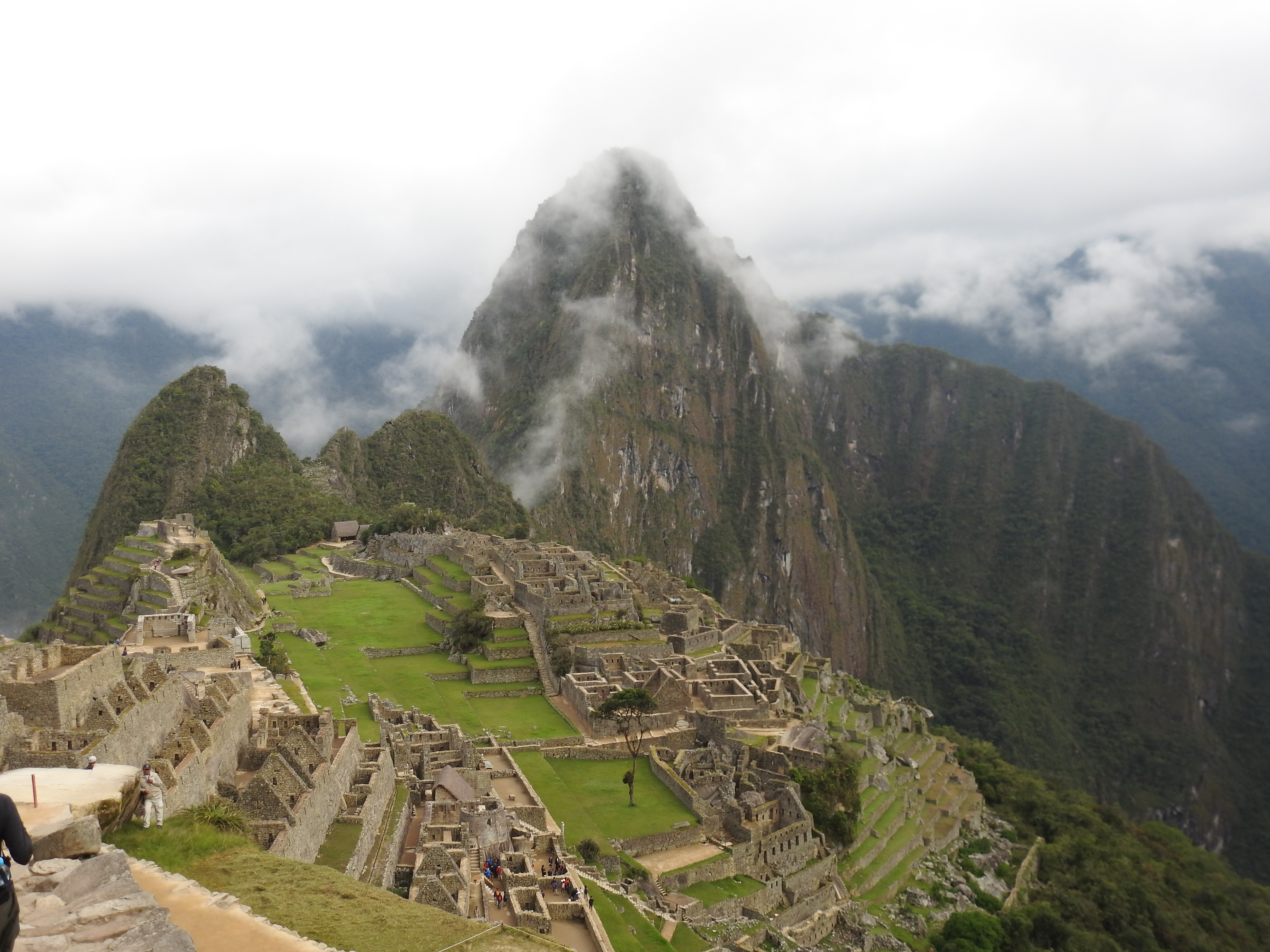 As promised, I have decided to write a blog about the Inca Trail with the benefit of 2 days of reflection. As I think about it, my thoughts drift to 4 categories:

While we went up and down and up and up and up, Wiley asked a simple question, “Why would a powerful empire – or anyone else for that matter – CHOOSE to live at such high altitude?”

Frankly, I cannot come up with an entirely satisfactory answer. Why did people stay in Saskatchewan, Siberia or the desserts of the Middle East? What is clear is that they adapt. The Peruvian are short, but muscular with massive lung-to-muscle ratios.

But I like to think that they stayed this high at least partially for the stunning vistas and profound beauty, be it large or small. Here are some shots that I hope help capture the majesty of the Andes. I am amazed that Peru has over 100 peaks taller than any in the continental US and almost 20 taller than Denali in Alaska. 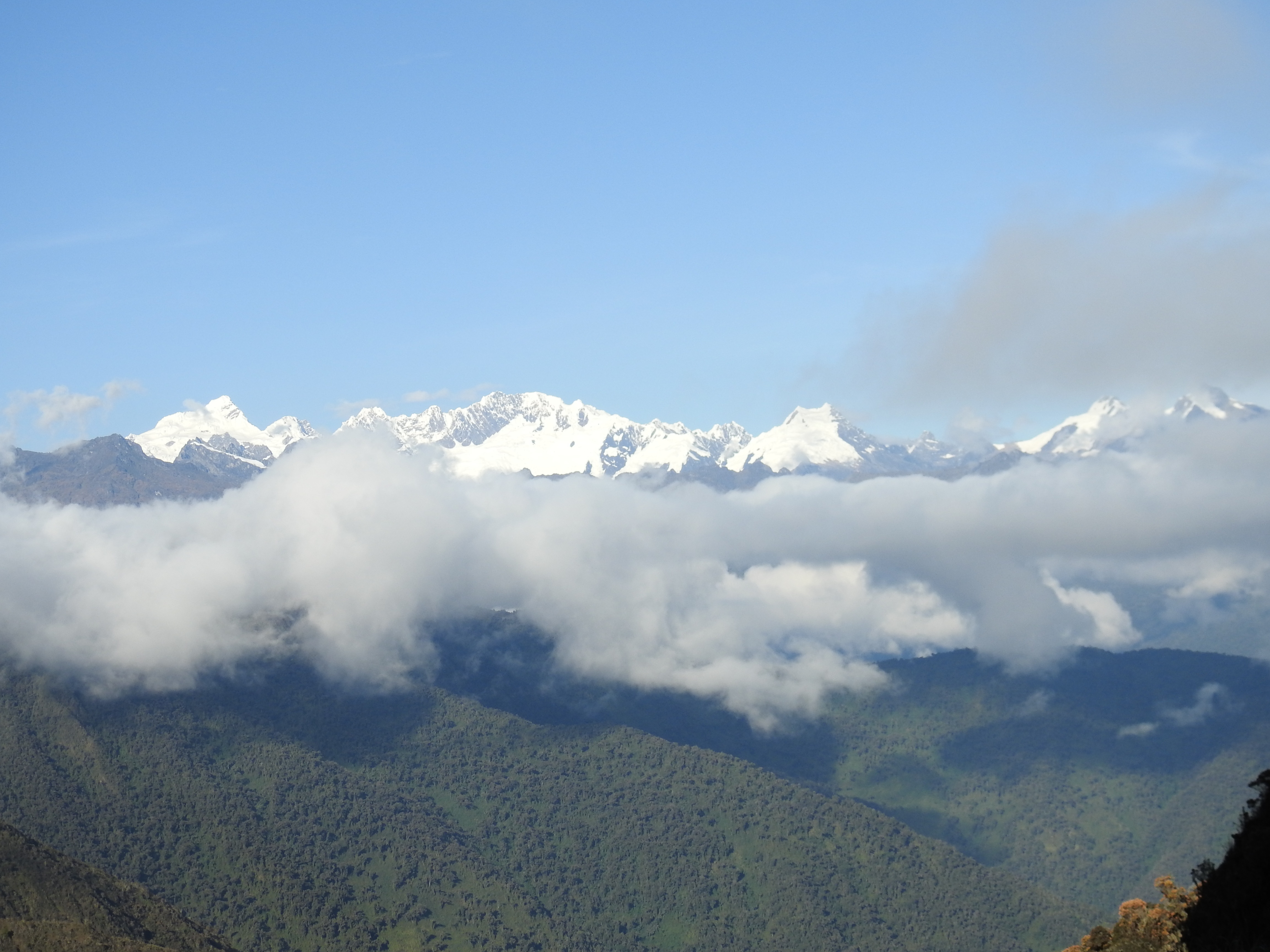 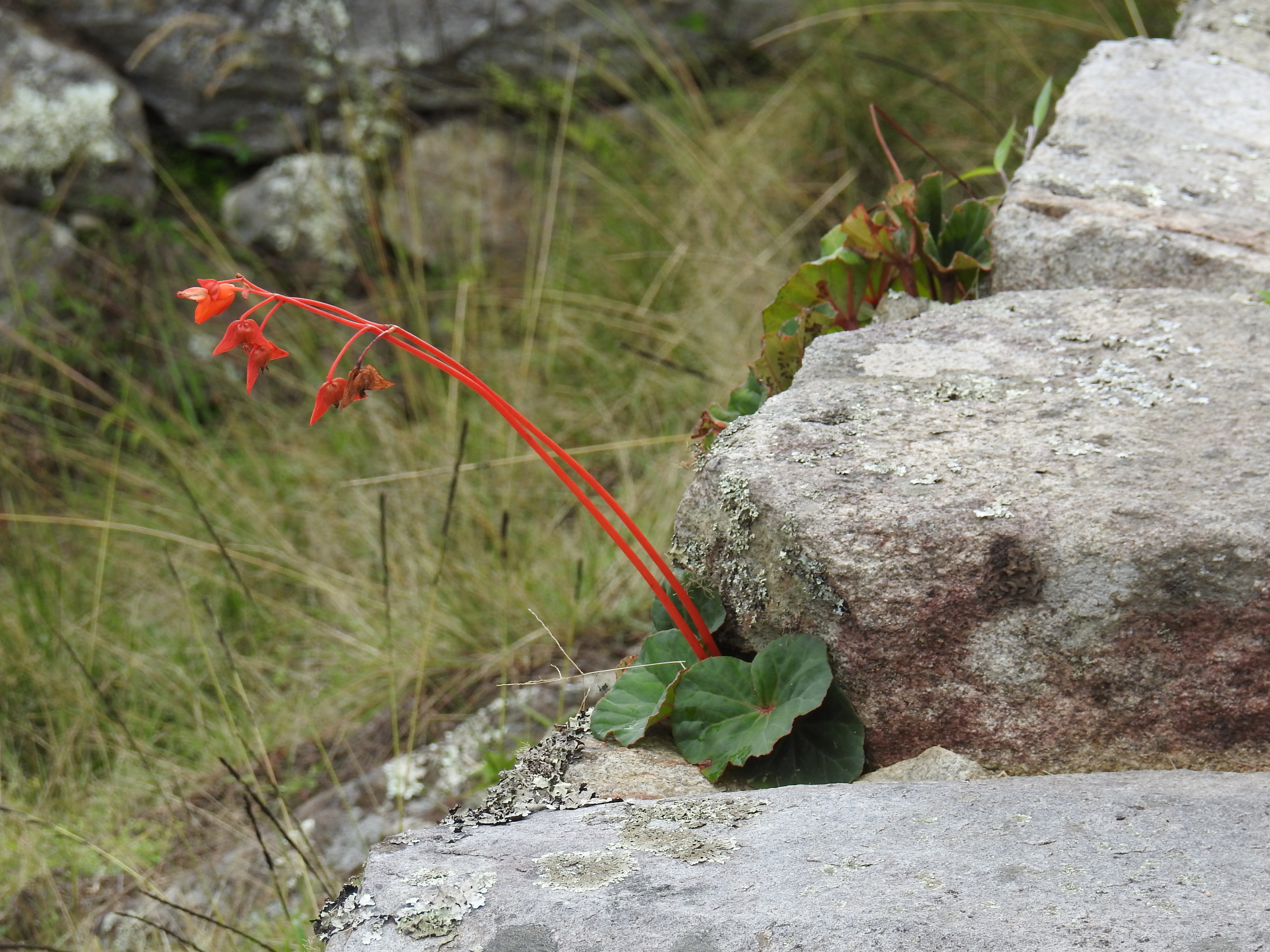 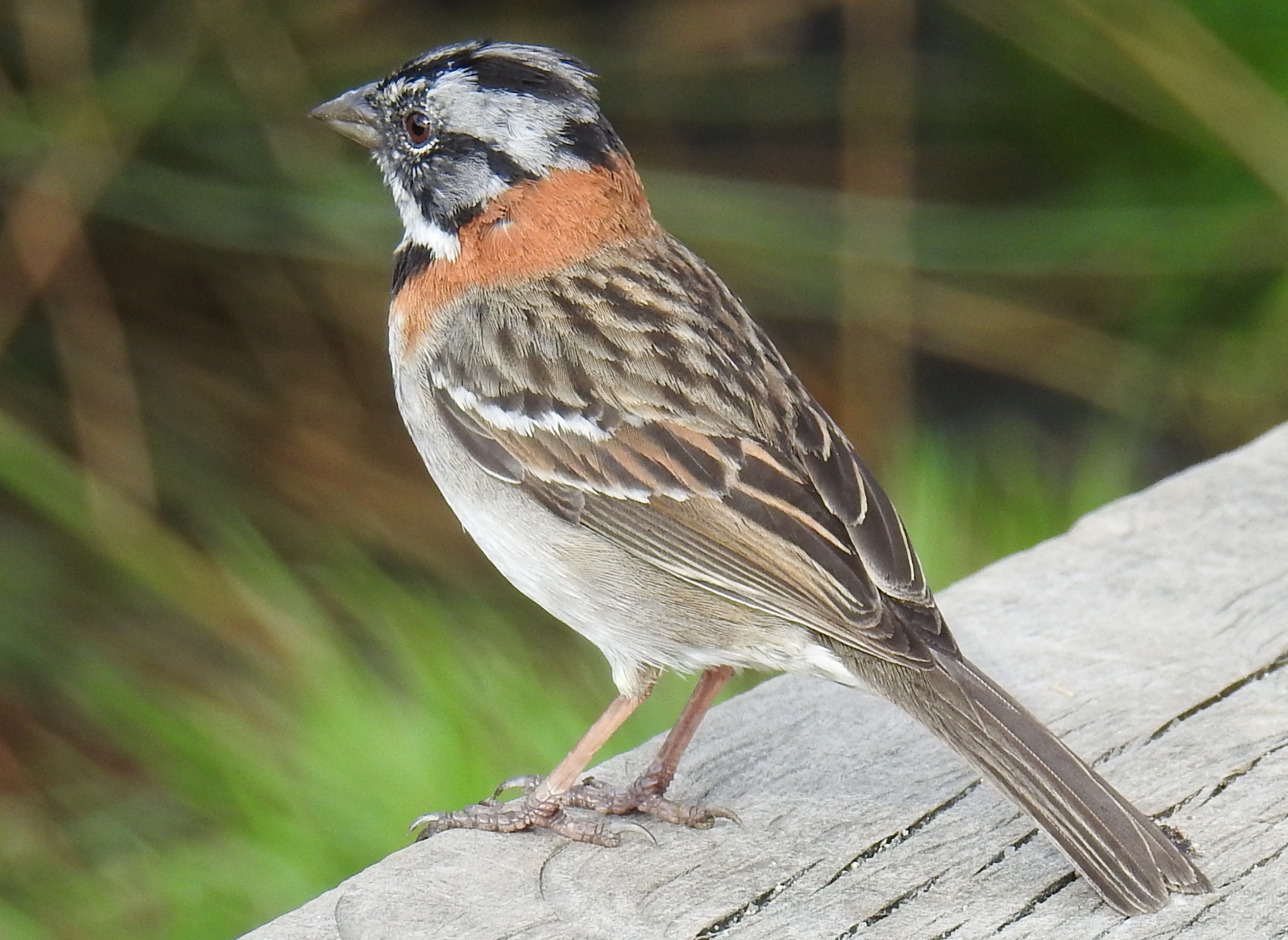 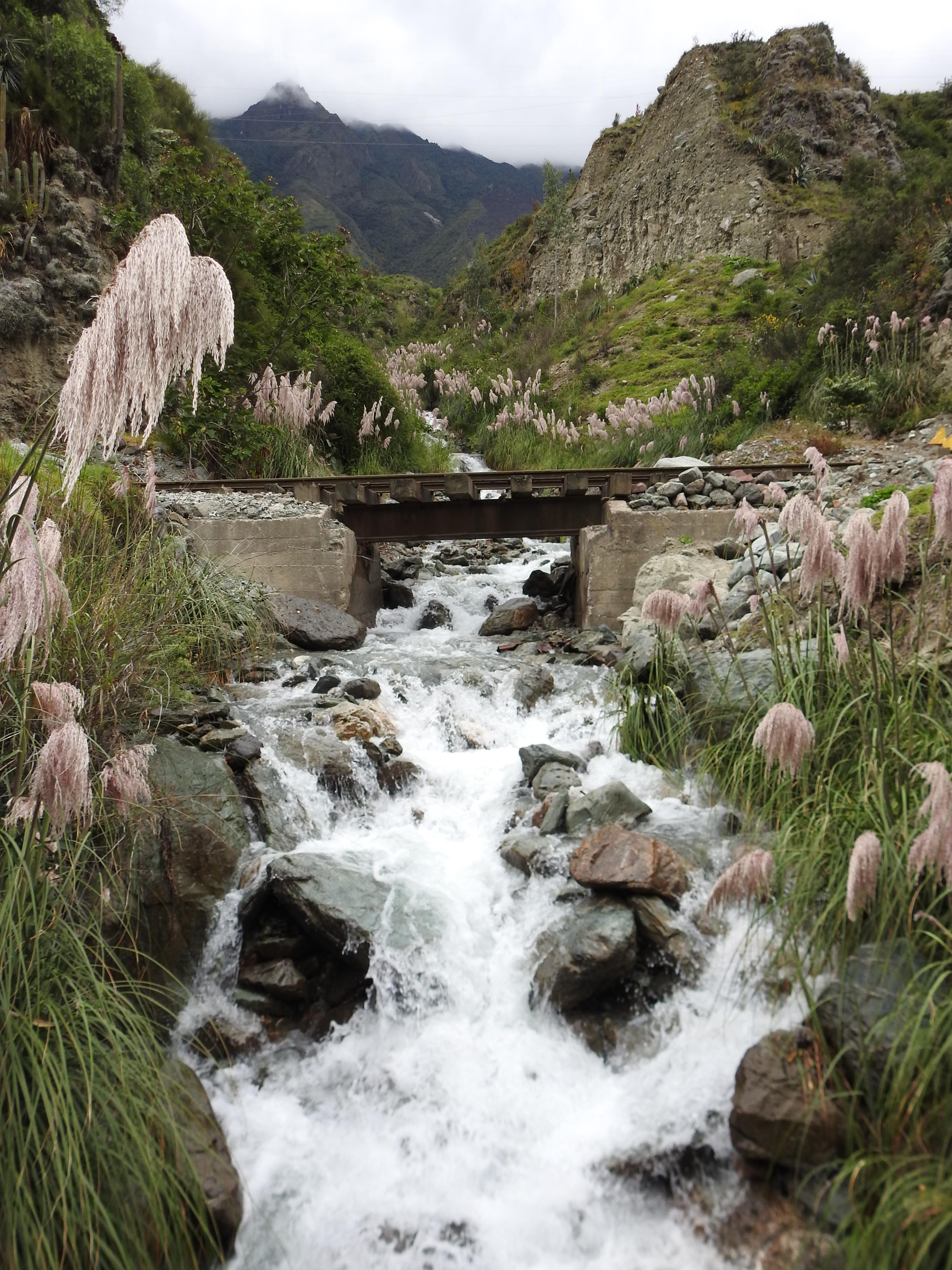 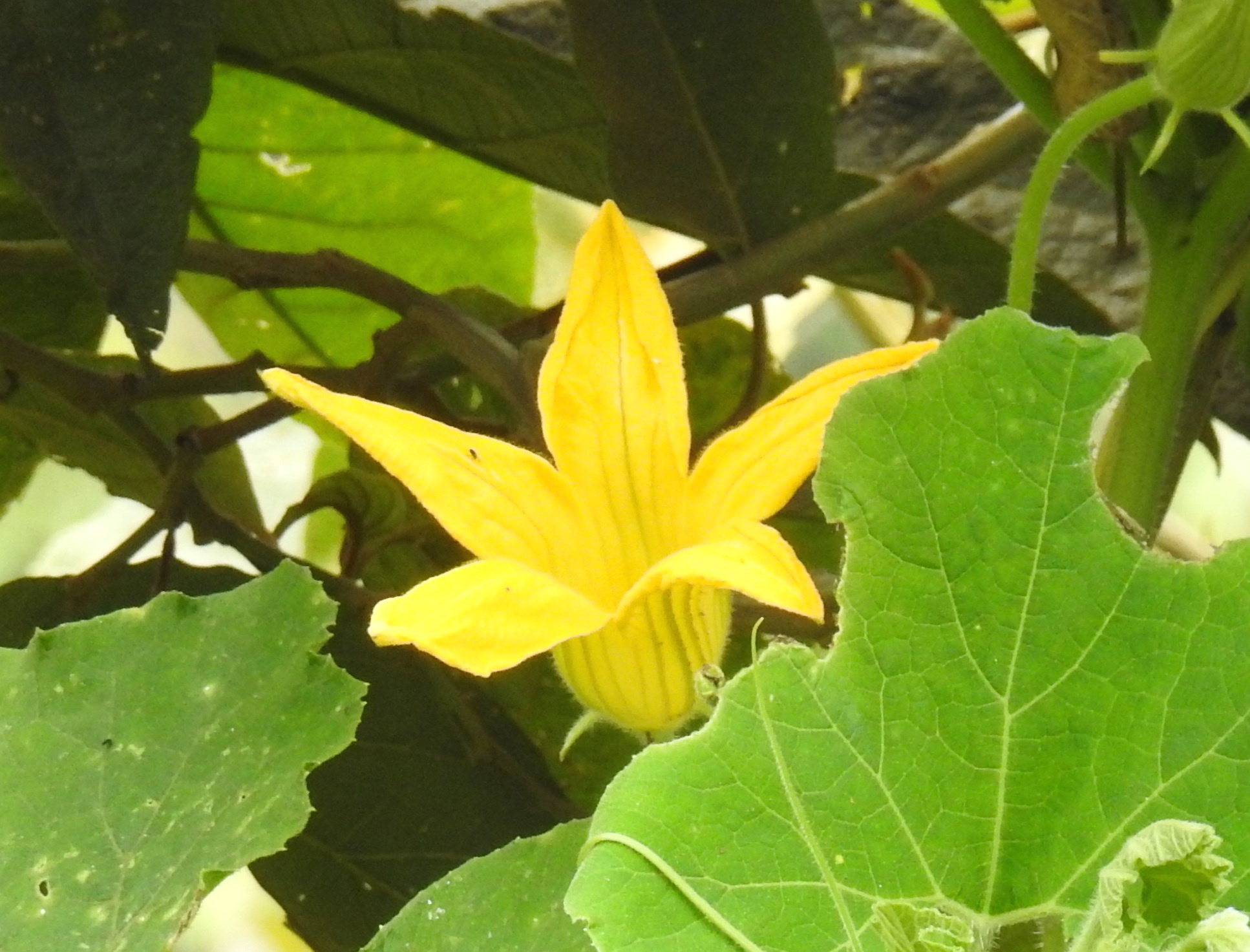 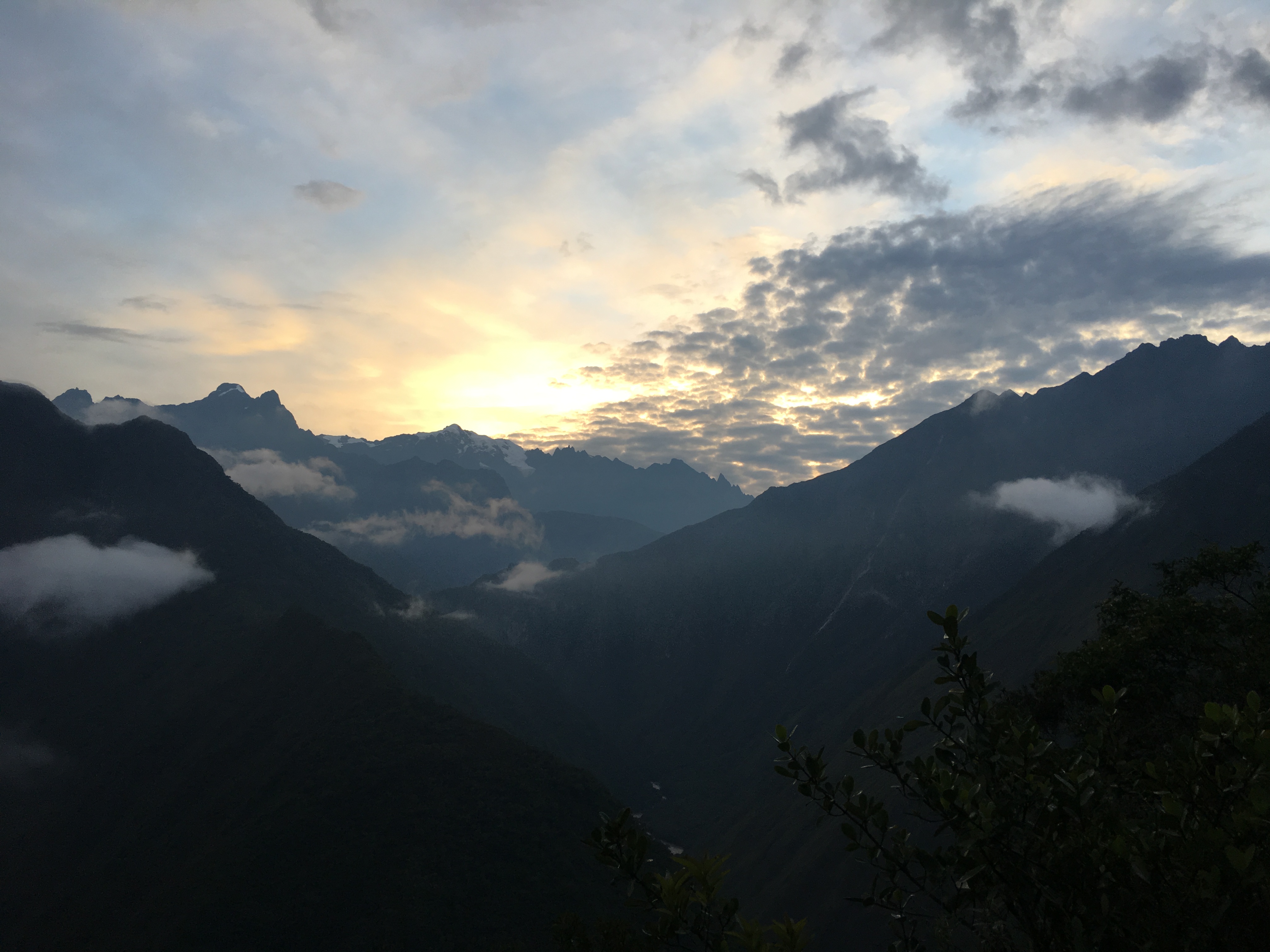 The Incan Empire was amazingly large, covering the west coast of South America from Ecuador to Chile and Argentina. Cusco (translated “navel” as in “navel of the world”) was the capital of the sprawling empire. Like many empires, they had a particularly great leader – Pachakutiq. Pachakutiq, or Pachacuti, was the Incan Alexander the Great or China’s Emperor Qin Shi Huang (the man who united China, created the Great Wall and made the terracotta warriors). Pachakutiq’s goal was to expand the Incan empire, but he was incredibly flexible in the way his people would accomplish this. Like the Romans, assimilation was always the first choice, “Look at the roads and cities and medicine we have. Join us and these things will be yours”. But (once again like the Romans), he would attack any group that failed to comply. His was a fierce army. At the high point of his reign, his 40,000 Incans ruled over 10 million people.

They did not have a written language or a standardized currency, but they still managed to accomplish amazing things.   Rather than tax using money, they would “tax” with labor. With this labor, they would build the 40,000 kilometers of roads and a shocking array of communities.

Actually, “community” is not the right word. They created sites with specific roles in a systematic manner. Every 5 kilometers on the major roads, they would build a Tambo, or resting place.

Every 25 kilometers, they would construct a city. Every 50 kilometers would merit the construction of a temple.

But within this structure, they showed great flexibility to create what they needed. One city might be mostly a farming community, while another would be a trading spot. This ruin was a major trading site. Archeologists found seeds from plants that spanned hundreds of kilometers in the storehouses here. 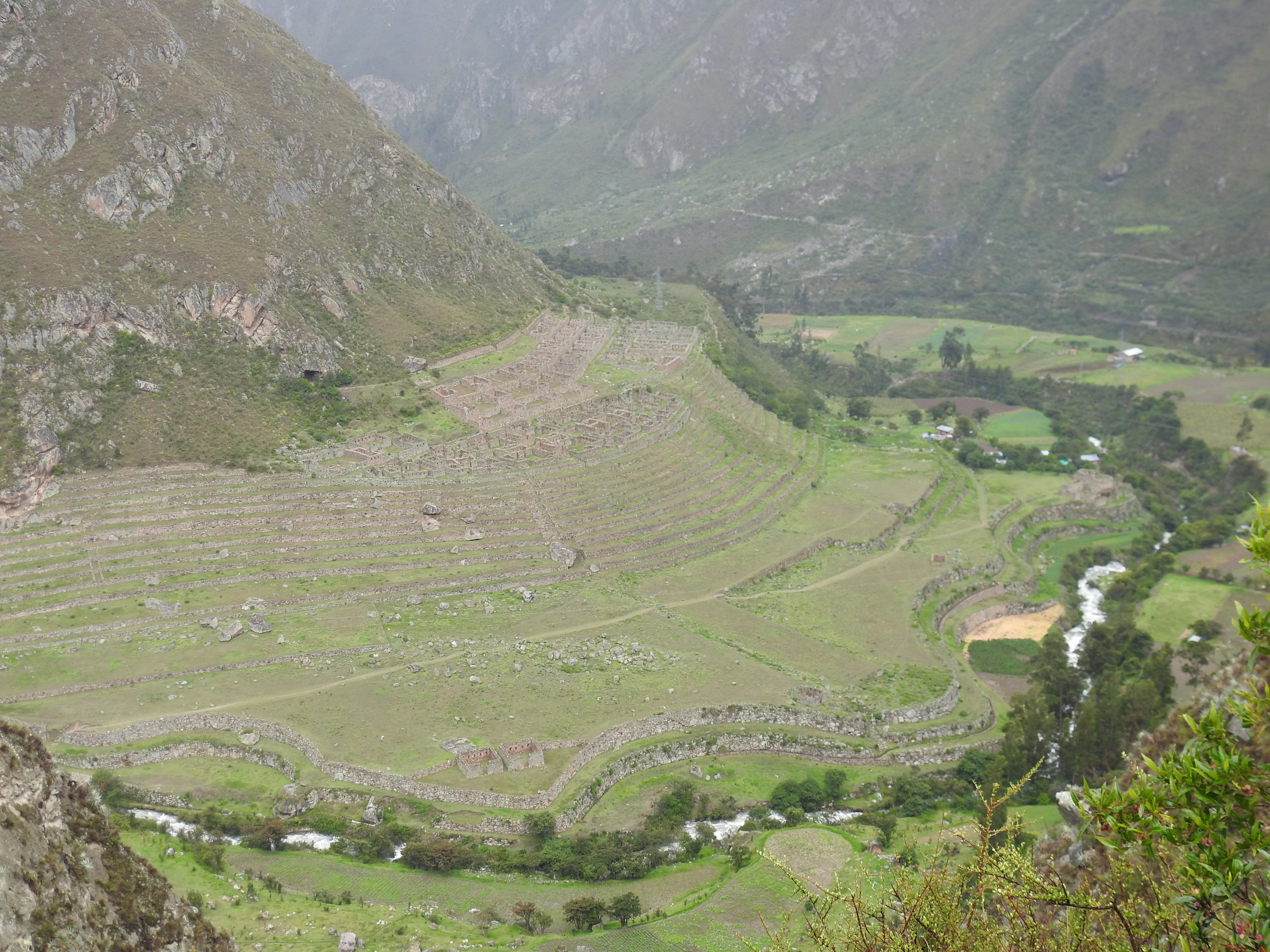 Other communities were essentially farm factories. They would have one noble overseeing a team of farmers all tilling the land to feed nearby cities. It was not a bad deal for the folks involved. In this city, Wanayhuayna (meaning “forever young” as the site is almost entirely original and intact), the noble home was great and the farmers lived comfortably. The elaborate terracing you see was built by Pachacuti and his retinue of labor. In effect, the farmers were employed by the Empire to grow enough food to feed Machu Picchu nearby. 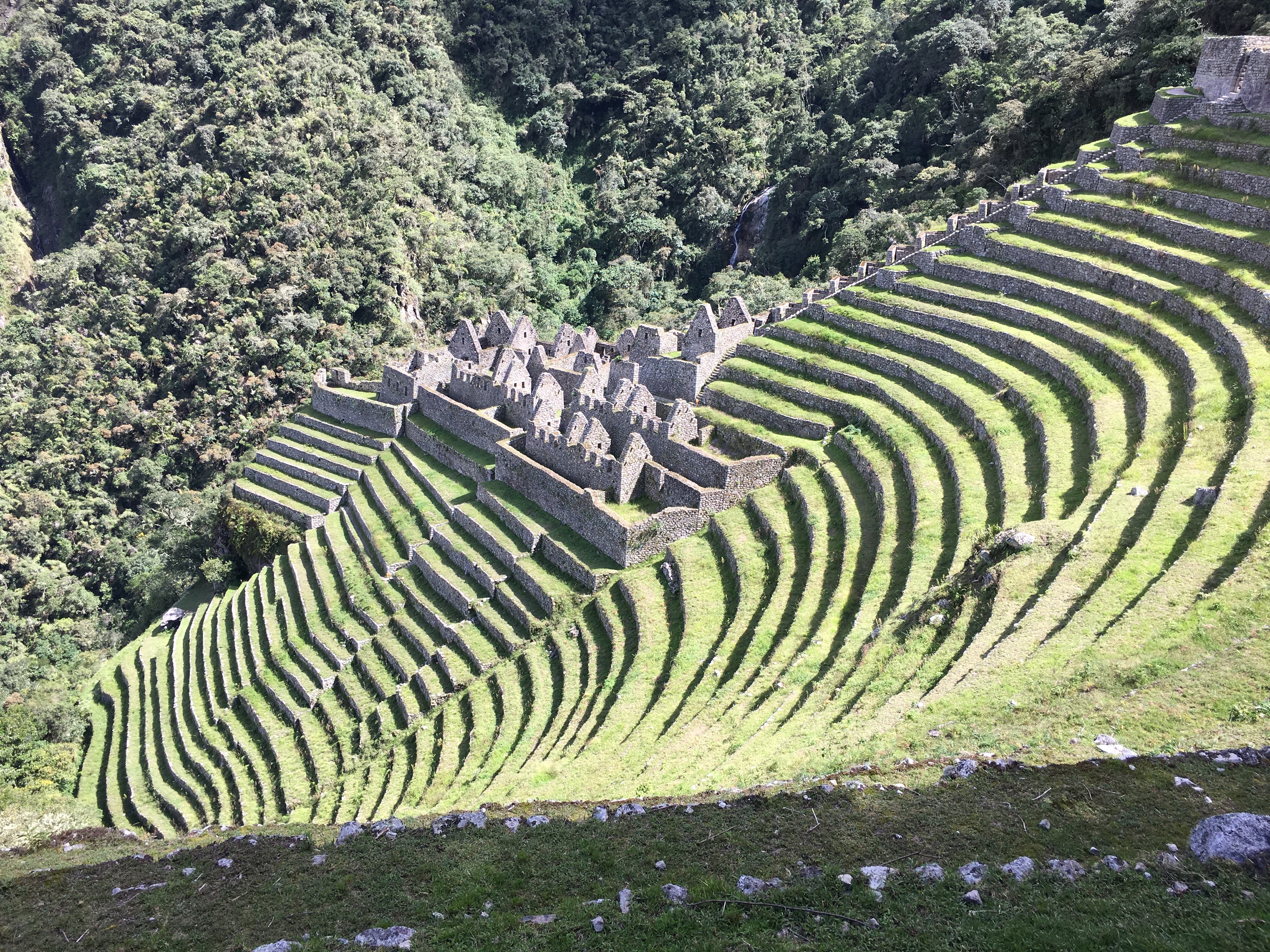 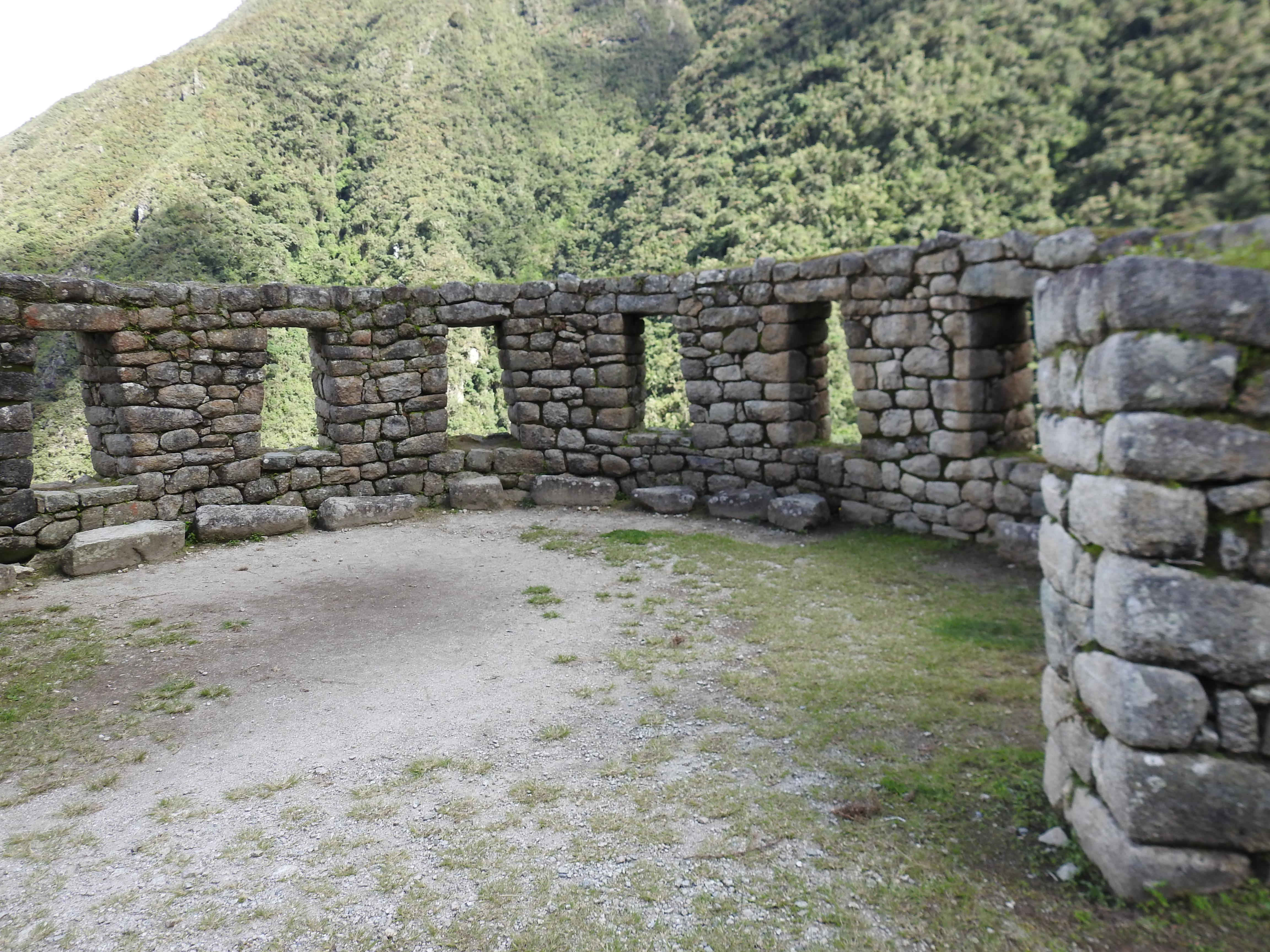 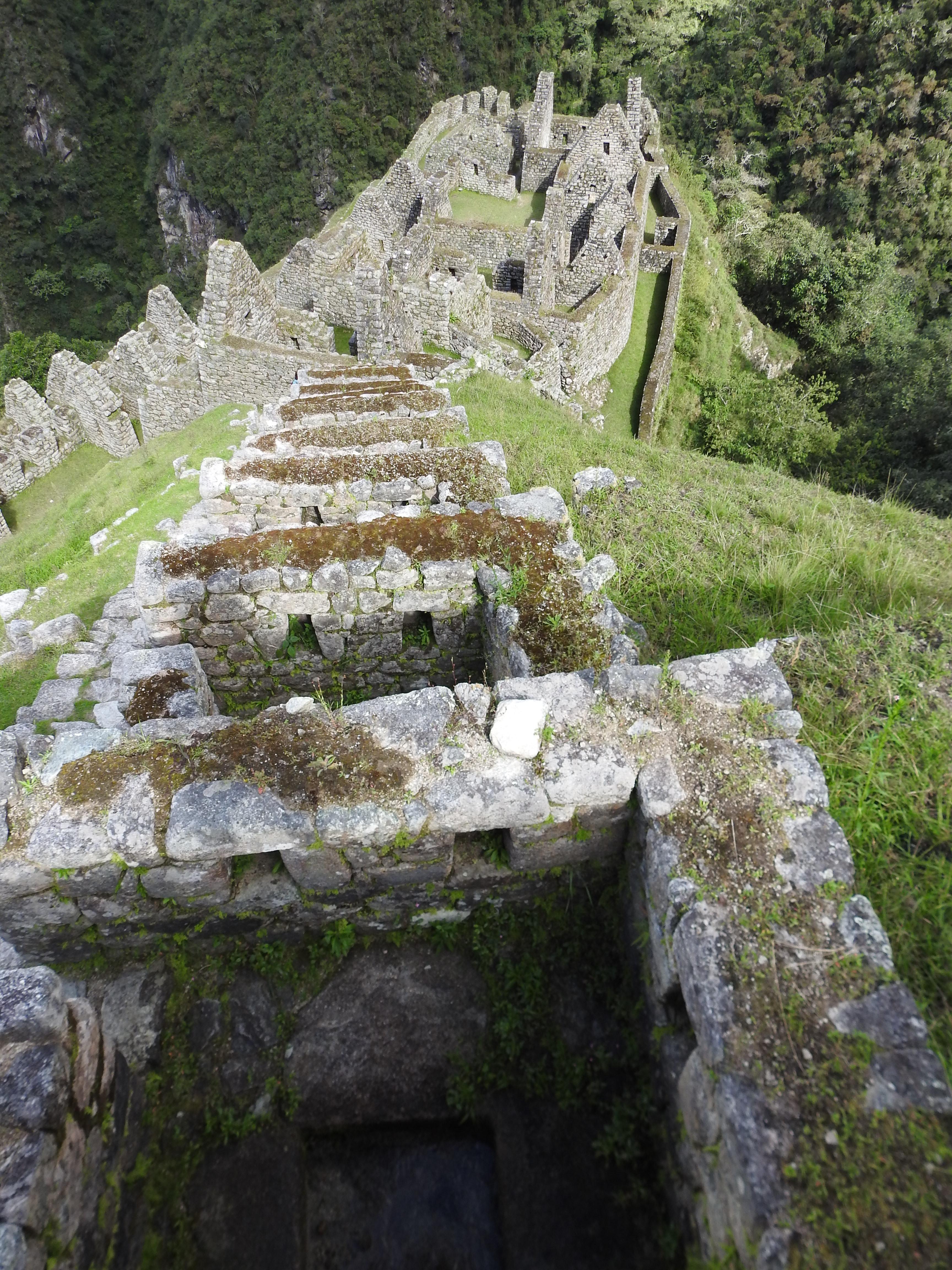 [Note: every name that we have for the cities of the Incas was created by discoverers or locals. Since the Incans had no written language, we have absolutely no idea what they called their cities. Wanayhuayna might have been “Whataburger” and Machu Picchu could have been called Pachacuti’s Pad. We simply have no idea.]

The crown jewel was Machu Picchu, the famous ruin that was built in the 15th Century and rediscovered by a US adventurer (Hiram Bingham – a somewhat unfortunate name) in 1911 by accident. Incan scholars believe that Pachacuti built this city for himself, nestled between multiple sacred mountains and supplied by a consistent spring. 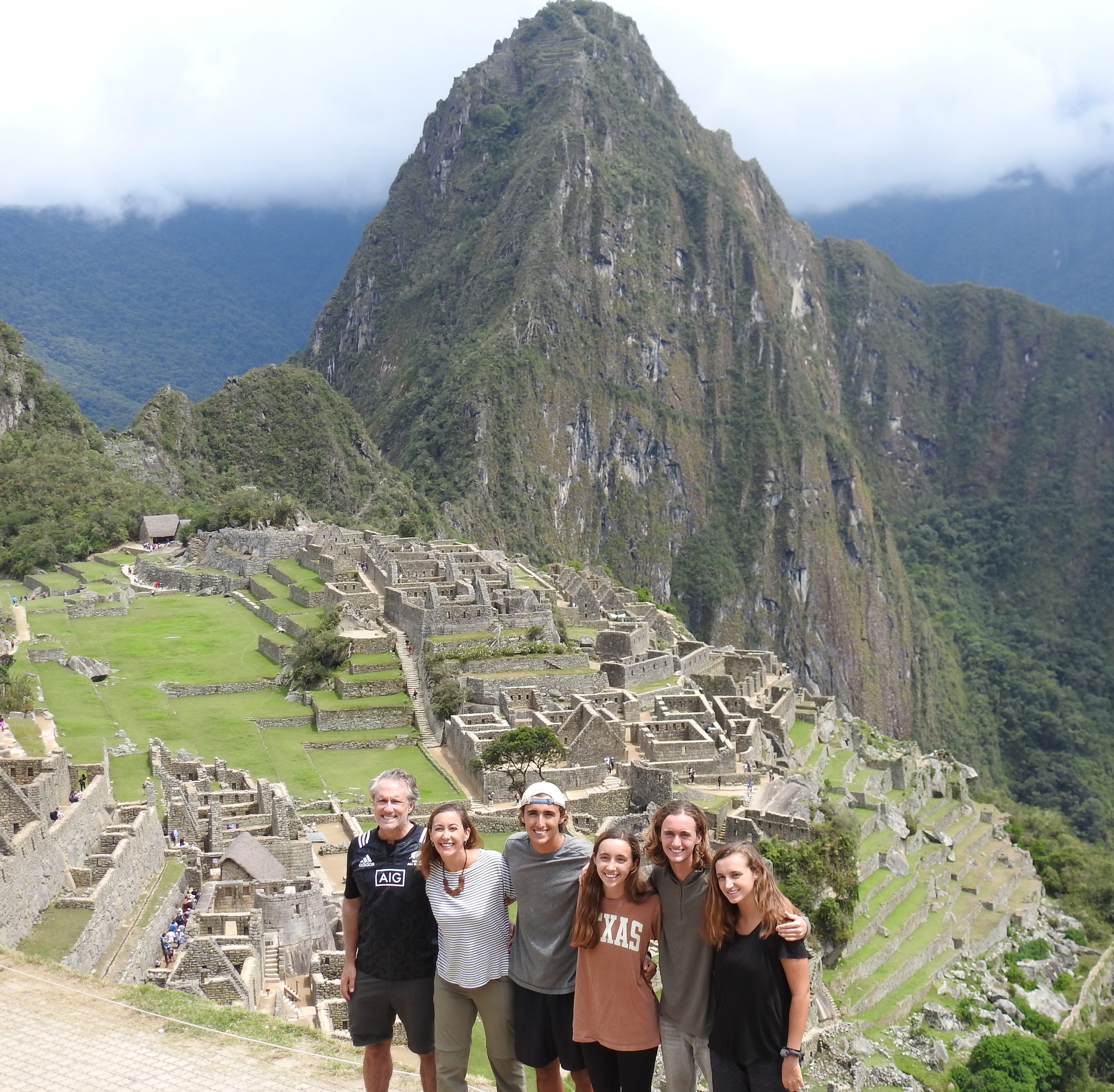 It had multiple temples, including the Temple of the Sun. You can spot temples because the quality of the masonry is substantially more refined than any other structures. Even the nobles lived in homes with less refined rockwork than the temples. 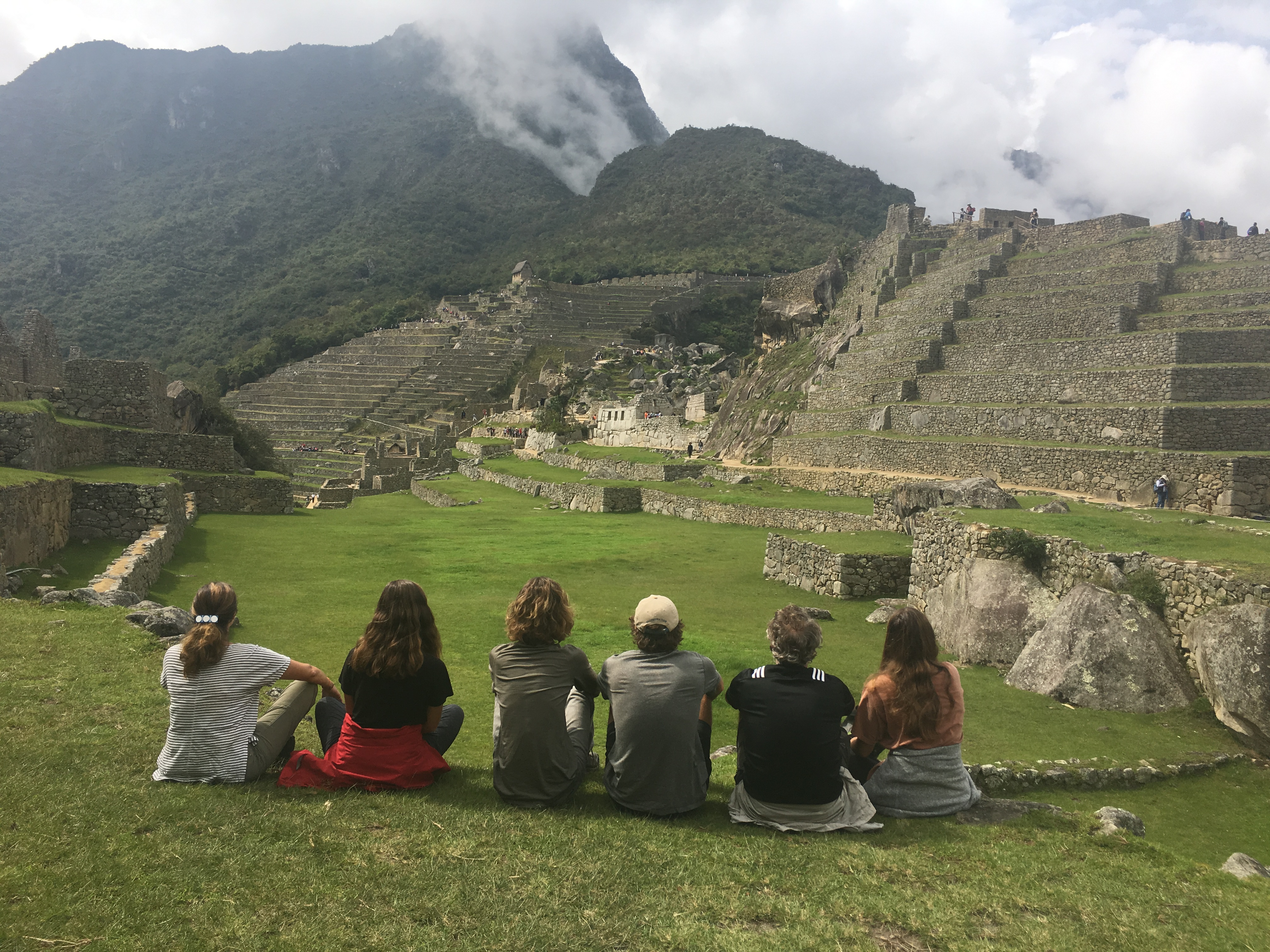 [Note: my college roommate, Mike Hobbs, joined an archeological expedition in 1982 to study this structure. It was actually that study, (led by an archeologist from the University of Texas) that realized that the Incas were sun worshipers and that this temple was used to predict the solstices. I remember Mike telling me about the site and here I was treading on the same ground he did 35 years ago. I find this really cool.]

Here I am pointing to the Temple of the Sun. 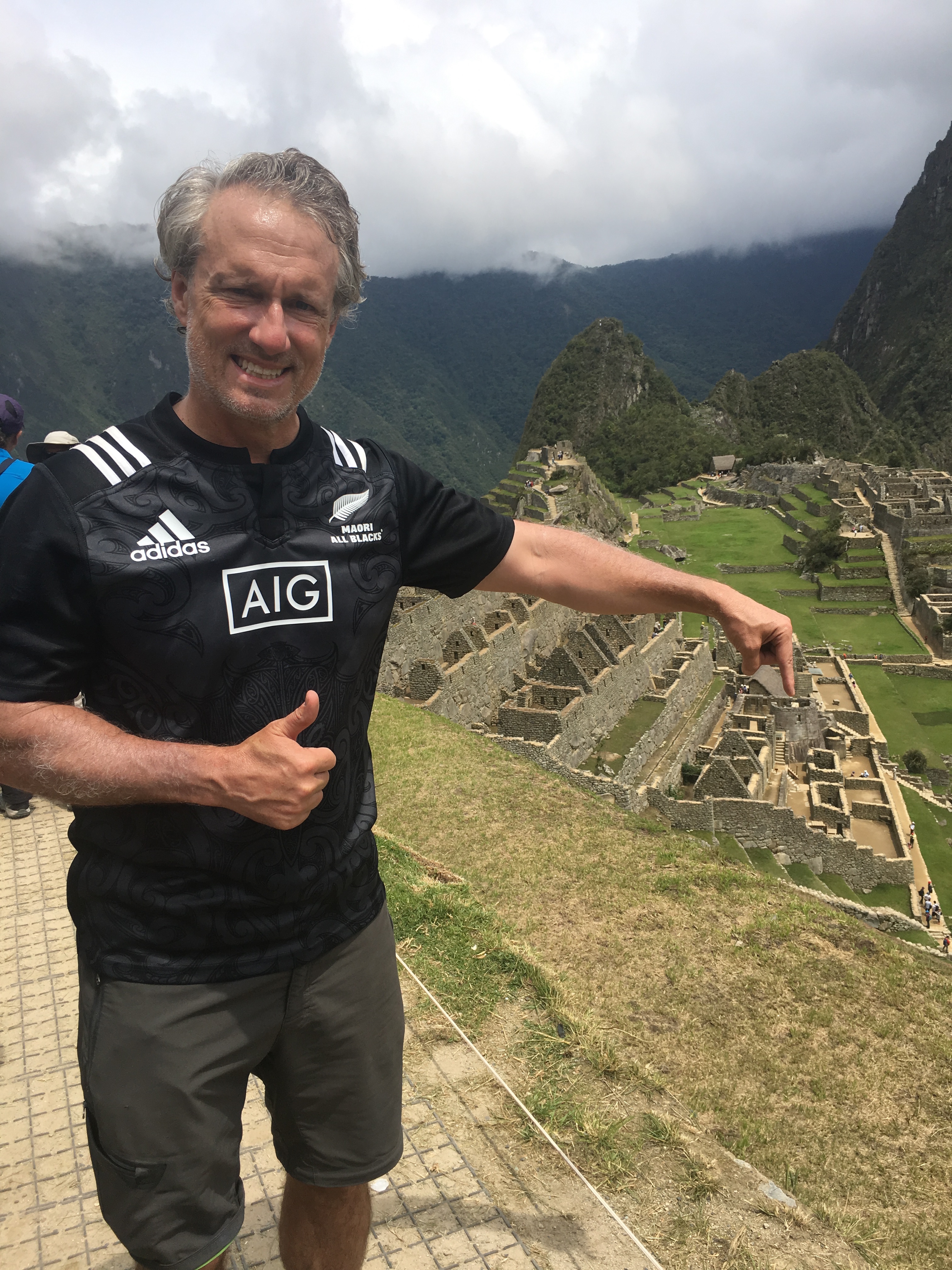 I could write for a long time about this city, but I will spare you my archeological obsessions. Instead, please enjoy the photos.

Physicality of the Inca Trail

I am not sure I have done anything quite as hard as this 45 kilometer hike that took us up a full mile and down almost as far. It would have been hard at sea level, but at 2 miles and higher, it took a toll on us all.

Wiley vomited on two of the four days.

Terrill would become so out of breath that her peripheral vision would begin to narrow.

Liam’s hip became inflamed after the first day and he would spend part of the trail ascending stairs using only one leg.

I did not have any single injury, but instead just felt a bone-weariness that was singularly exhausting. I also suffered form mild mental degradation. I would find myself searching for the right word or forgetting where I put something. My legs would sometimes burn and other times feel dead or leaden. 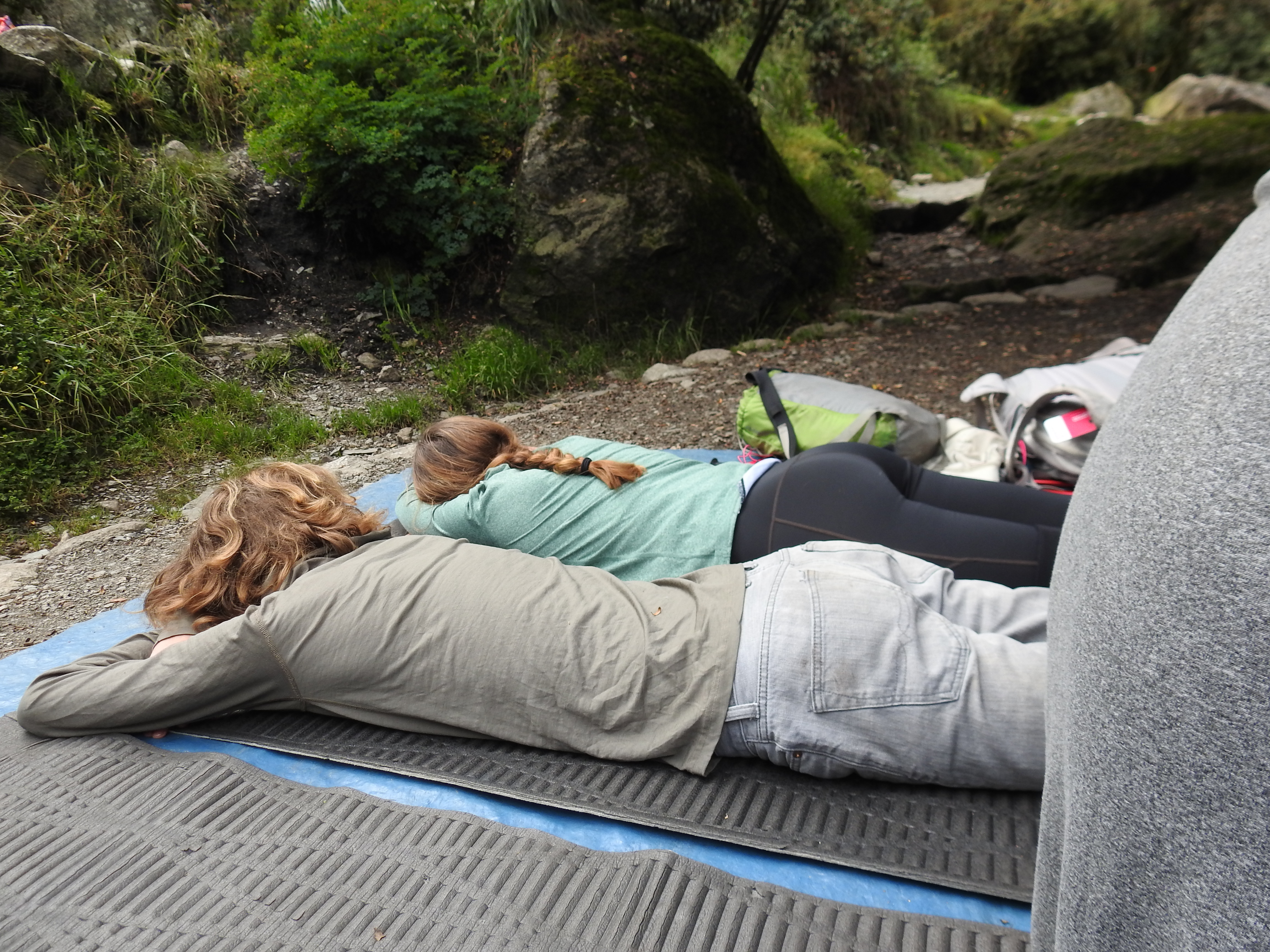 All of us discovered that digestion changes radically at altitude. I will spare the details, but simple know that bodily functions that you might take for granted will betray you at altitude.

Now that we are back at sea level, we feel like Olympic athletes, but that was not the case on the Trail.

Time with the Collegians

As I have often shared, both Susie and I are both excited about the collegiate adventures that await Wiley, Liam and Terrill, but we are also dreading losing their company. Their departure was one of the major motivations for this trip.

I must say that the Internet has made this transition somewhat easier to take. They can become understandably detracted by the ability to connect with friends who are already at college and to research what their pending life will be like. We also need to stay in touch with our camp team and other friends and associates. So this trip has made us closer, but not immersively so.

But within 10 minutes of the trailhead, we were entirely off-the-grid for 3.5 days. We had no electronic connection or entertainment.

So we did some quality bonding. Sometimes we would have long talks as we walked. [Note: these talks happened when we were descending. During the ascents, conversations reverted to an alternative language of grunts and pants]

We talked about why some empires grow and others lose. We discussed the advantages and disadvantages of the Spanish conquest. Our chats would speculate on why tree-lines differed in various regions. We wondered about a life of constant ascension and dissension with only sandals.   We talked about politics, life, college, goals, and swapped jokes.

At the end of the day, we would play cards and joke.

In these four simple days, I was blessed with the gift of their undivided humor and presence.

These moments on the trail and in the tent were enough to make me forget the thin air, searing thighs/calves, freezing mornings, and questionable bathroom facilities. These were precious moments with three of my favorite people who will soon be moving away to embrace new challenges.

We still have time with Virginia, but these moments came at exactly the right times.

I feel blessed, if not exhausted.