In our last full day in Buenos Aires, we chose to do a series of quintessential Argentinian experiences. We saw the church that Pope Francis served in; visited an epically beautiful (and staggeringly European) opera house; we met friends for drinks at a sidewalk café and watched a tango show.

It is worth noting that I continue to lose my voice. While this might seem a blessing to some, if not many, people who know me, it does make navigation harder in streets filled with jackhammers and horns. Remember when we were in Tokyo and absolutely no one ever used a car horn?

Here a horn is like a good gesticulation while talking, you feel mute without it. I actually listened to a series of horns at 7AM today that sounded almost exactly like the portion of George Gershwin’s “An American In Paris” that featured car horns pleasantly pitched and rhythmically timed.

But if we were hoping for quiet, we misplaced our optimism.

The Catedral Metropolitana is the primary Catholic Church in Buenos Aires and Argentina. Pope Francis was simply Bishop Jorge Mario Bergoglio when he held services here. The church is a little odd. From the outside, it looks more like a Neo-Classical US Federal building than a church, but it was lovely inside. While we were there, a service started with resonant chants and pageantry. 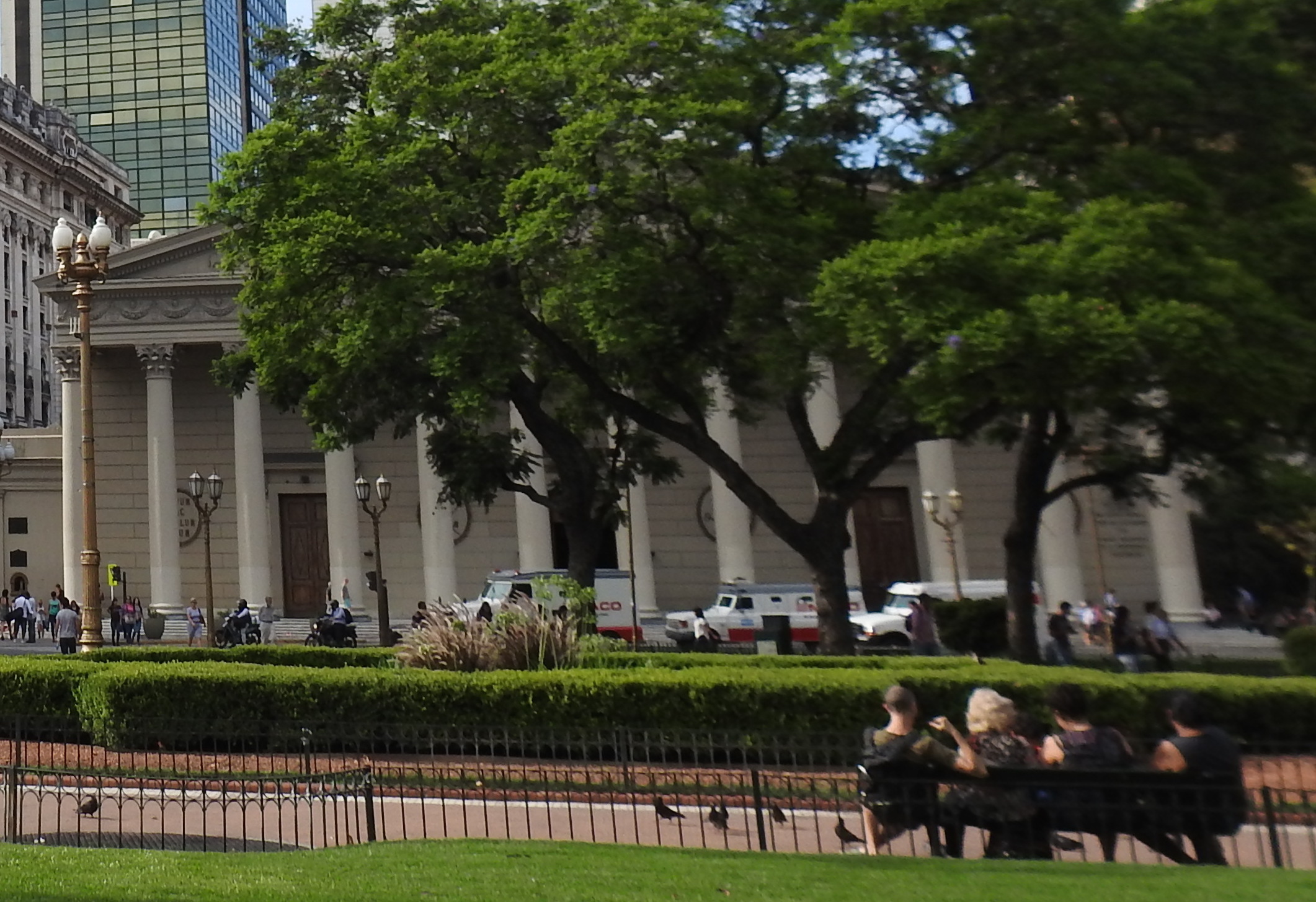 We left and headed to the Teatro Colon – a massively impressive opera house. Ambitious Argentinian leaders wanted to create a structure in the spirit of La Scala and the other great European opera houses. Amazingly, they achieved exactly that. A quick Google search of “best opera houses” found the Teatro Colon in 4 of the 5 “top 10” lists. It features enough gold leaf and red upholstery to make Louis XIV proud. Nothing is understated. Nada. But, I guess that is the point of opera. If you want subtle, grab a haiku or watch a minimalist Beckett play.

Opera is like Texas: If some is good, more is better and too much is perfect!

Our guide shared many fun stories, including the fact that the building is the odd confluence of 3 architects. The first two were Italians who both died at age 44 – one of ammonia and the other at the hand of his wife’s lover (the butler – really). They then decided to go with a Belgian architect who was already older than the apparently fatal age of 44, so he managed to finish it. They leaders planned for a 4 years build. The structure actually required almost 20 years. We learned about the box seats of presidents and mayors that have terrible views. But that is not the point. The politicians do not want to see the opera as much as be seen at the opera.

Even our jaded 20 year-olds found our guide pleasant and even worth their time (shocking, I know).

We then had a true treat. Two summers ago, Terrill spent a summer in Grenada Spain and befriended two other women from Houston. These two women had another friend who Terrill subsequently met in Houston. This young woman, Dorothy Nugent, is living in Buenos Aires for a year before attending Boston College. We met her and her lovely parents at a café near the famous Recoleta Cemetary. [Note: we visited this site on a previous day. It is worth noting that we humans will compete for status even in death. Some of the tombs therein were marvelous exercises in excess.]

I was less than excited to meet new people as my voice was failing me. But this trio was delightful. I spent most of the time with the father (Paul) who has a love of odd travel that I daresay exceeds my own. I love to travel, but I generally like some form of plan. Paul and his lovely bride decided to drive a VW microbus through Mexico for 6 weeks for their honeymoon. He also shared some great stories and indulged my relative inability to speak.

I wish we would have had more time with them, but we needed to get to our final activity, the Café Tortino tango show.

It is worth noting that Susie and I share many interests. I daresay more than most people. Put differently, there are really few areas that our interests truly diverge. One huge category is sports. Susie really does not care for them. She understands that I do and supports me, but she does not share my interest.

Similarly, she loves dance. I try to get it. I really do. I understand the balance, grace and skill. In the case of tango, I also get the sensual tension.

But I must say that my greatest enjoyment comes from watching her face as she watches the dancing. The spectacle itself does essentially nothing for me. The kids at least pretended they had fun for this picture.

I must also admit that I faded as the day ended. The conversation with the Nugents had proven to be far more engaging than I had anticipated. As a result, I was virtually mute when we left them. We then walked 2 miles to the tango show. If there were a day that I would suddenly share Susie’s love of dance, this was not the ideal situation.

The show was also hampered by a fault in programming. While the audience was at least 40% non-Spanish speakers (several Americans as well as people from Asian countries) the show was largely a single tenor singing Spanish ballads into a microphone feeding a mediocre speaker system. It is worth noting that the Teatro Colon has zero amplification. But this 2000 square feet room apparently needed major amplification.

We are now back and I am happy to communicate in a non-verbal manner.

Tomorrow, we head to Lima and the final days of our adventure.