Feeling Pain with the Fellas 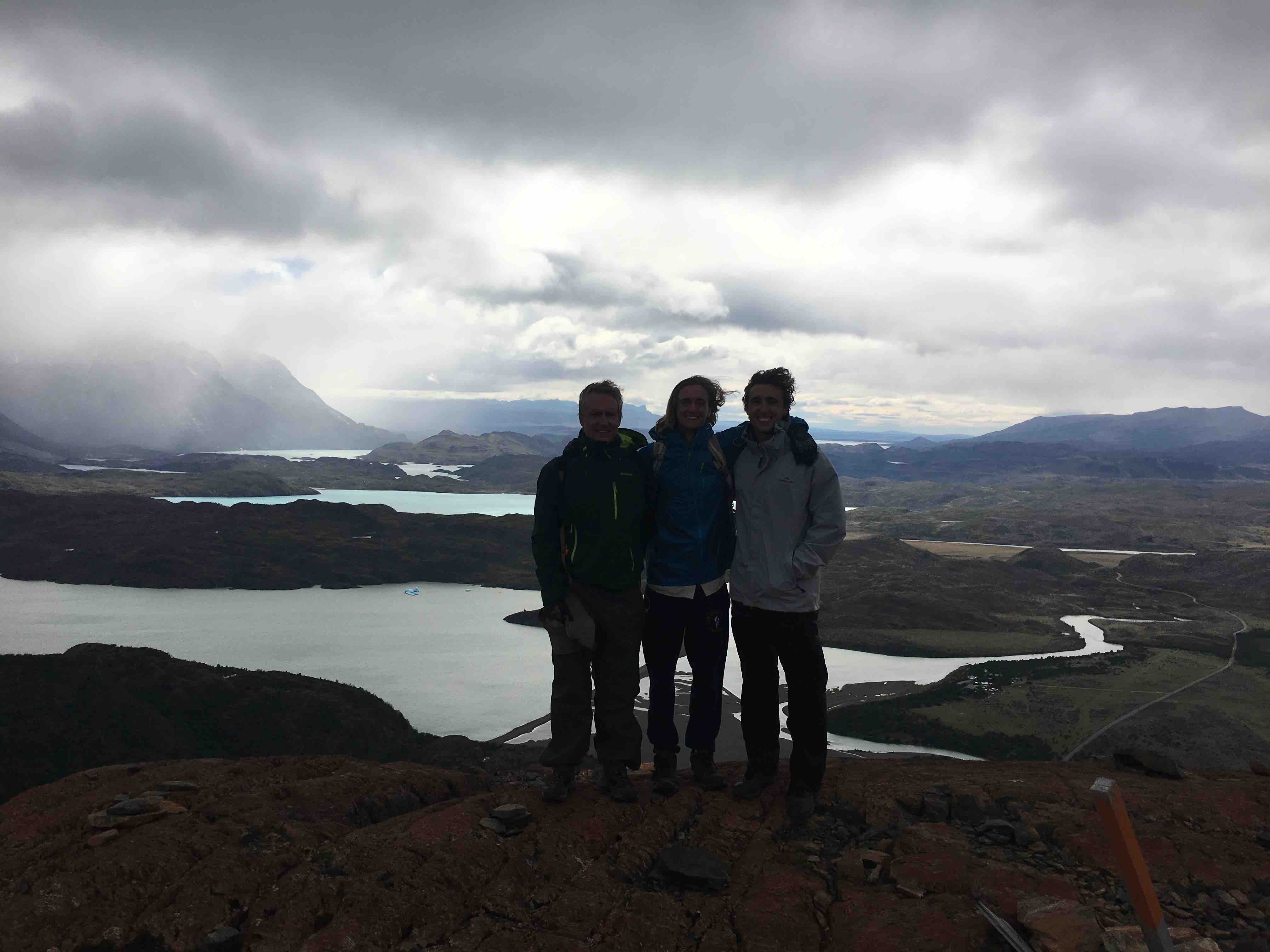 I am beaten like a rented mule. [Note for PETA: I have never rented a mule nor beaten one.  I, however, am aware of the practice and use the phrase for illustrative purposes only.]

As I mentioned in a previous blog, we planned another aggressive hike for Chile like the long one we “enjoyed” in Argentina (15 miles, 300 flights of stairs, 8 hours). The weather and a very sweet excursion guide saved us from 10 hours in rain, 40-50 MPH winds and non-existent views in the Torres del Paines Base Trek.

But the boys (and, if I can be honest, myself) were longing for a challenge. To be fair, Terrill, Virginia and Susie would usually be hankering for a challenge, but each had a minor injury that reduced their ambition.

So after our much more mellow (yet still lovely) day of excursions yesterday, we decided to pursue something harder today. We initially wanted to do a trek that was similar to, but slightly less weather-dependent, than the Torres del Paines Base hike. By “slightly less weather dependent”, I mean “you still get the rain and the wind, but at least you get some views”. Our goal to take this trek was thwarted when the catamaran that would convey us across the lake broke down.

We were left with some odd options.

After nixing these ideas, the excursion guide looked slightly puzzled.

“Don’t you have anything else?” I asked.

“There is the Ferrer Lookout hike,” He suggested with thin enthusiasm. “You do not want that. It is hard.”

It has taken me some time to translate the language here. I do not mean Spanish to English. I mean Patagonian to normal human.

When people who live in near-Antarctic conditions with violent weather and stunning mountains say “hard” or “challenging” or “difficult”, you need to take heed. To give you an idea, the 15 mile walk with the 300 flights of stairs we conquered 5 days ago would not quite make the grade as “hard” because it was “just” long and “only somewhat steep”.

But this one would be “hard.”

Our guide seemed relatively sure we would have the good sense to pass on this final offer, but I made the mistake of sharing the offer with the boys.

“But,” I feebly added, “The views are not particularly amazing and the walk is essentially straight up a steep mountain.”

So we found ourselves leaving at 8:30am to tackle a very rarely embraced walk. To give you an idea, the Torres del Paines Base walk has 1500 people per day. This one would have less than 2 dozen tackle it.

It was exactly as advertised. The path route seemed to be created by a person who seemed unaware of the concept of “traversing”. You know traversing. That is what highways do to climb a mountain – going left and right in a zig-zag manner to reduce steepness. The path we found was more like an exercise in Euclidian geometry – “the shortest distance between two points is a straight line”.

We “only” walked around 2.2 miles each way, but we climbed 2100 feet (210 flights of stairs) over rocky, muddy terrain. When they gave us stairs, they were 2-3 times higher than standards stairs.

As we ascended, I attempted to ignore the pain and focus instead on the shared joy I would have with Wiley and Liam upon completion. To be honest, I also thought about the derision I would face from Liam were I to fail. It was not easy to stay focused. Our main guide Christopher (a semi-pro rugby player) advised that I should take long inhalations in my nose and exhale through my mouth. This all sounded good except I was literally panting like a dog on a 100 degree day.

But I would have a moment of validation about 70% of the way up. The second guide, a lovely 22 year-old trainee who has one year of college left, called out to Christopher from 100 feet below us. I do not speak much Spanish, but I understood “mas largo” (more slow) and “muy dificil” (very difficult). He sat down and waved us forward.

I was not exactly sure how to process this. On one level, I felt a certain level of accomplishment – this 52 year-old had out-lasted a 21 year-old Chilean native. On the other level, I now knew that stopping early was an option.

Both thoughts oscillated through my head as I continued to pant.

We would reach the top. We did so in 70 minutes. The recommended time is 120. Apparently, our rugby-playing guide wanted us to fully understand that life would have been better with the boat trip or horse ride.

We were slightly denied the elation of the summit by the unexpected drop in temperature and the huge gusts. Whatever joy I might have felt quickly froze and blew away.

We returned in similarly rapid time and I am now totally spent.

Meanwhile, I am excited to crash.