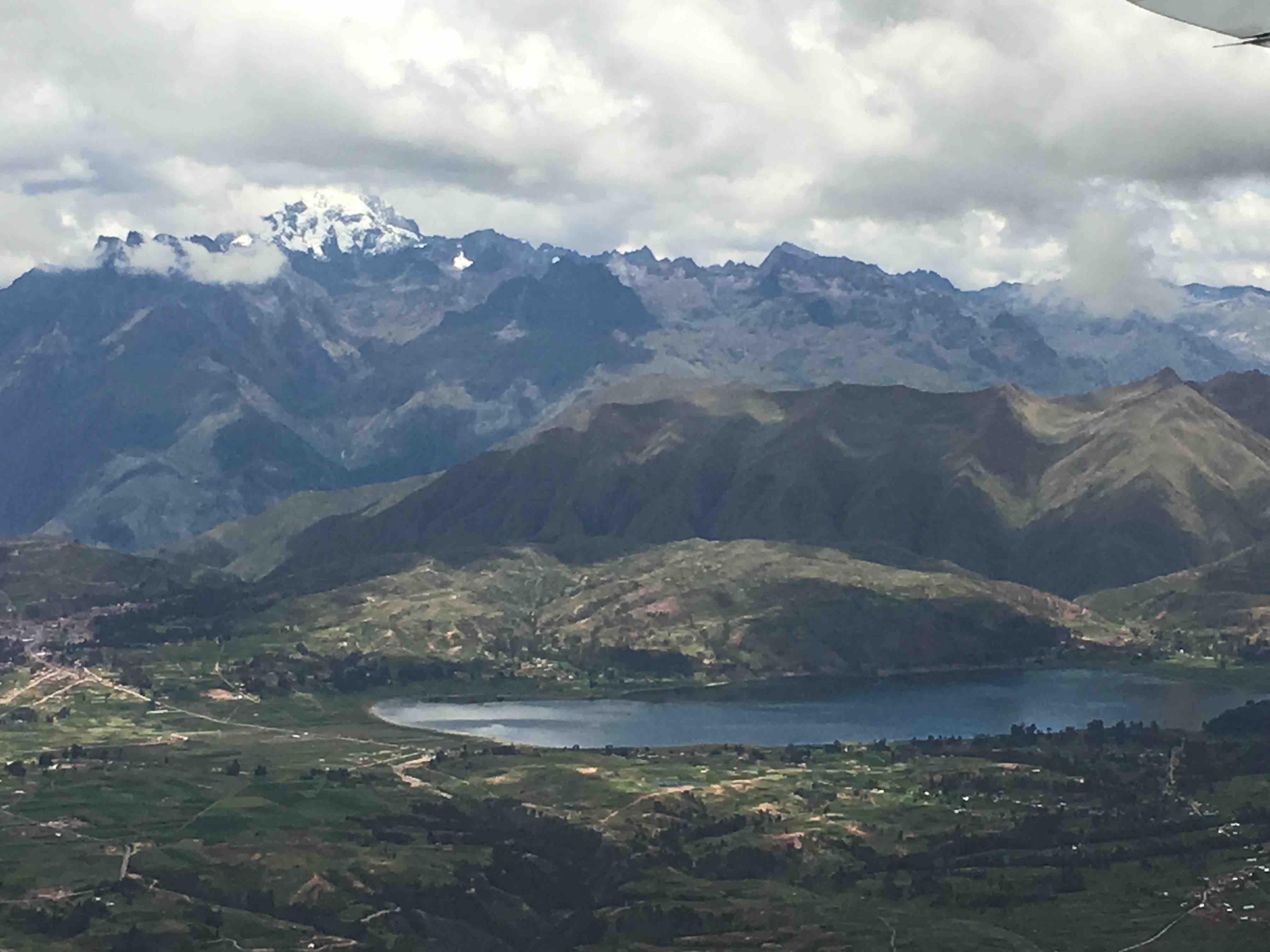 Years ago, my wise mother shared an observation with me.

“As people get older, they become more.”

I asked her what she meant by that. Her explanation was simple, “A person’s most prominent tendencies become even more prominent when they age.” A worrier will worry more. A jokester will crack more jokes. A cynical person will become more distrusting. And, God help us all, punsters will tell more puns.

I cannot confirm the validity of her observation yet, but I do have a similar rule of thumb.

“When people are in airports, they become more.” Or, perhaps more specifically, “when the Baskin family is in an airport, we become more.”

The most prominent positive and negative attribute shows up when we enter airports.

Terrill is determined and efficient. As a result, she often blasts through checkpoints and security areas. She has her bags organized in such a way that she can get through faster than anyone else. That is admirable, but on occasion she will be 4-10 people ahead of us in a line that requires togetherness, like baggage check-in.

In contrast, Wiley is pleasant, unrushed and accommodating. He happily lets strangers go ahead of him in line. His courtesy, however, leaves him way behind us in lines.

Neither style is a problem, but they do not work well together. Think “ice cream and ketchup”, they work far better solo than as a tandem.

We know Liam is craving time alone as an adult without the tether of parents. In an airport, he raises his isolation to new heights. It is actually amazing to see how much he looks like he has never met us while remaining within 15 feet of the family.

Virginia, who is social and friendly, manages to connect with wifi even when none seems available to normal humans. She then updates us on every friend and trend. While it is fun to feel connected, it can distract when we are hoping to organize the troups.

Susie, our wonderful organizer, becomes hyper-organized. She is in a perpetual state of checking tickets, passports and luggage. She is also a devoted mother, so she keeps a constant watch on her many charges.

I like motion and eschew idleness. Before 9/11, I would arrive at an airport roughly 20 minutes before a flight would leave. I can remember at least 10 occasions when I was the last person on a plane and they closed the airplane door behind me. While Susie dislikes flying, I dislike actually being in the airport. Time in the airport becomes a series of tasks that I attempt to do as quickly as possible, even though I know that it will subsequently lead to long stretches of idleness.

So, in short, I rather marvel at the fact we survive these transitional experiences.

We are now in Cusco, Peru.

This is a TWO mile high city. Altitude sickness is a real issue here. Every travel guide starts and ends with advice to avoid mental confusion, headaches and dehydration. So our goals today (after we landed around 2PM) have been quite modest:

So I am being a little aggressive adding this blog.

Before I conclude, I want to add two quick stories.

We randomly chose a restaurant near our hotel. It was 4:45, so no one else was there. Our waiter, Eduardo, was incredibly excited to see us. He introduced himself, attempted to cracks some jokes and insisted on wearing a chef’s hat. After multiple attempts at side conversations, we realized that his Spanish was almost as hard to comprehend as his English.

He then smiled, explained it was his birthday and “perhaps I had a drink to celebrate”. At the conclusion of our meal, he asked Terrill and Virginia their ages. I initially thought he was flirting with them until I realized he was determining whether they could have a legal drink. He quickly returned with a huge jug filled with leaves and a huge smile,

“This is mint pisco – a special celebration drink from Peru. It is our gift.” 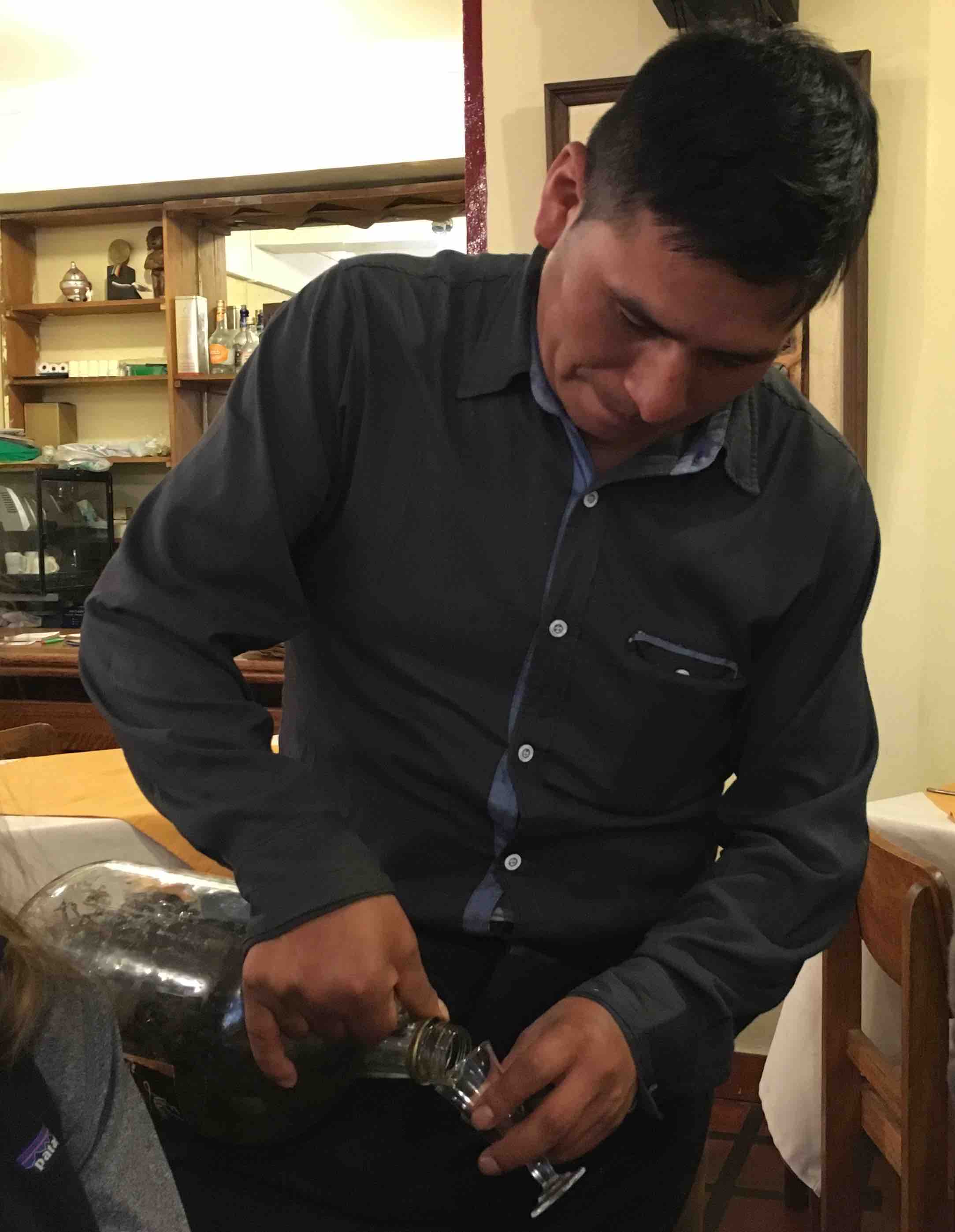 I asked him to join us, but he explained that “the boss would not like that”. While this might seem unexpectedly professional, he then promptly went to the bar and snuck a Corona beer into his front pocket. It was as amusing as it was strange. It made us wonder if the pisco was too good to shared with employees or simply too bad to drink himself.

The second story concerns our briefing. As I have mentioned, Susie and Virginia have had some knee trouble and decided to pass on the Inca Trail, a 25 mile hike that will take us from a low point of 7900 feet and a high point of 13,779 feet with LOTS of up and down in between. We had asked for 2 porters to go with our group of 6, in addition to our guide (Jaime) who we met tonight. So we assumed that our group would be a party of 7: Wiley, Liam, Terrill, 2 porters, our guide and me.

Clearly, there had been some massive miscommunication.

Our party will number 17. In all the literature we read, we never fully understood the logistics involved in this 4-day trek through the Andes mountains. The two porters we ordered were “extra” porters. We would also have 10 other people carrying tents, tables, food, gas, toilets, kitchen equipment and who knows what else.

I watched Liam’s expression as he heard this.   For a guy that prides himself on independence and self-reliance, this felt a little too much like the travels of a prince than an adventurer. Our consolation is that they will walk ahead to prepare the camps, so we will not have a constant reminder of our relative comfort. [Note: the cost of this excursion was so affordable that nothing would have hinted at this level of labor. It is a reminder of the wealth of our nation. These hard-working people are delighted to work for a fraction of a wage that anyone in the US could even contemplate. We are told that they would hope for a $20 tip/each after 4 days. It sometimes does not seem fair.]

So I am off to drink more water and get to bed early!