Travel Travails I: Super Security and an Endangered Monkey 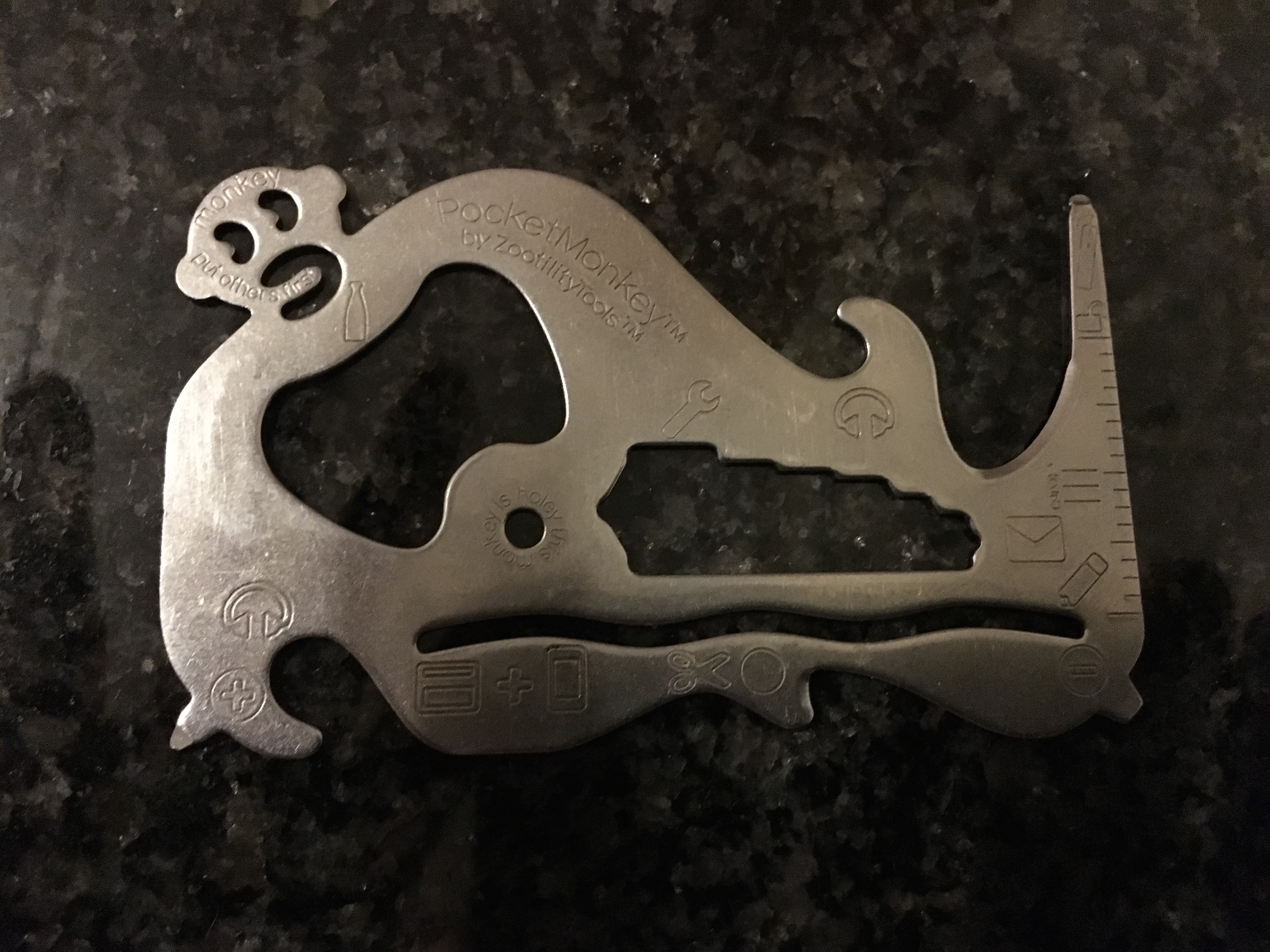 El Al should be feeling a tad competitive now.

I say this after our experience with security at the Kigali International airport.

El Al is the national airline of Israel. Given the fact that Israel’s relations are, well, strained, they have created the most elaborate and effective anti-terrorism protocols in the airline industry. Despite being a top target for terrorism, El Al has not had a terrorist attack in over 40 years.

Rwanda, for reasons that completely escape me, seems like it is striving to compete with Israel.

We noticed it from our arrival to the tiny country. Every hotel and many supermarkets and restaurants feature metal detectors at their entrance. We frequently saw armed soldiers standing guard. While some of these vigils appeared in logical places (the Presidential Palace, near embassies) other felt downright random, like an empty lot or an abandoned construction site.

I convinced myself there is some merit system to determining the location of guard duty.

“Ah, Henri has been exemplary. We shall place him at the front doors of Parliament.”

“And what of Jacques?”

When we arrived at our hotel, they used mirrors on long telescoping poles to look underneath our vehicle to assure it had no bombs.

Based on what I have seen, I would assume we were in a police state suffering from constant attacks from rebel groups or clandestine terror groups.

I, however, am aware of no such troubles in Rwanda. Perhaps they know something I do not know. Maybe they developed protocols when Boka Harram and other terror groups began to appear in Nigeria. There is a civil war in neighboring Congo, but that seems highly localized.

Could they have received a special deal in security equipment? I wonder if the contract for private security was awarded to a leader’s brother-in-law.

Of perhaps this is some odd effort to make westerners think better of the country. “Hey Gladys, you know who feels really safe? That small country of Rwanda.”

“Is that a fact, Edgar? I am scared to travel to those countries with oddly spelled names in Africa. What makes you think it is safe?”

“Their stores have more security than Disneyworld. I am serious. If they had anymore x-ray machines, they could double as a diagnostic hospital.”

For the most part, this bizarre focus on security has been mostly a novelty and not an inconvenience.

At least until we needed to fly out of the country. About a kilometer away from the terminal, all vehicles were stopped and searched. This is not the typical road-side search where a guard indifferently glances into a car full of Mzumbus (people of European descent), exchanges a laugh in Swahili with the driver and sends us on our way.

This search involved leaving the car, standing at the side of the road and having a bomb-sniffing dog check every back-pack, camera back and carry-on. We scored a minor victory by avoiding the removal of all bags from the car for the search. I think they saw the Tetris-like pile of interlocking backpacks that our vehicle required to make room for 6 people, their luggage for a month and one driver. But the delay did take 20 minutes.

Upon arrival at the terminal, we said goodbye to Didier, our driver, and headed to the terminal. We met a group that checked our tickets, passports and immunization records. After this check, we were given a bright yellow, laminated card saying “Boarding Pass”. The Boarding Pass would be our key to getting past the next guard (not 15 feet away). We then headed to the first X-ray machine and metal detector.

At this station, I removed my computer from my carry-on bag and from its carrying case. The iPad came out as well. I then took off my shoes.

I emptied my pockets and removed my belt. I even offered to pull off my shirt, but I guess he thought that was a bit too much.

Upon the other side, a guard required a further search of my bag. I had a portable speaker in my large backpack. He then made me prove that its Bluetooth function worked, a task that was complicated by the fact that the speaker has decided to pair with Virginia’s phone (which was 20 feet away) and not my own.

Once past this earnest group, we checked in with the ticket agent and checked our large bags, a process that required another 20 minutes.

We proceeded now to Passport Control where we answered questions and got our passports stamped and our yellow fever immunization checked a second time. From there, all passengers met in a large area with Duty Free stores on three sides. The fourth side was the next security checkpoint. The airport’s designers somehow determined it made sense to store travellers in one central area prior to moving them to a second central area. There were no flight specific gates, just two areas for the passengers of 5 different planes to wait. From this second location we would walk outdoors to the plane, or take a bus, depending upon the distance it was parked.

So we went through security a third time.

Silly me, I assumed that this x-ray and metal detector would be rather uneventful. After all, I am a seasoned traveller. I know how to pack. I have honed my packing skills to a fine edge. No fluids for this guy. You will not find any scissors on me, thank you very much. I can pull out important electronics in seconds.

I approached, took out my computer, iPad, camera (which had been moved to my carry-on bag), phone, and emptied all my pockets. Shoes? No need to ask – they were on the belt before anyone said a word.

After walking through the metal detector, I reached for my wallet only to have the X-ray monitor flag it.

“What do you have in there?”

While initially confused, I remembered one of my favorite travel tools, my Pocket Monkey. The size of a credit card, the Pocket Monkey is a high-grade steel multi-tool with a can opener, bottle opener, orange peeler, screwdrivers (normal and Philips head) and a nut loosened. It has other functions, but I have used each of these on multiple occasions. I liked mine so much that we have given them to members of previous camp Leadership Teams as well as our own kiddos.

While it looks initially scary, it has no serrated or sharp edge. The one pointy bit is no more threatening than a ball-point pen. It has traveled with me on over 30 domestic flights as well as trips to China, Mexico, Switzerland and Tanzania.

Once a security guard takes a close look at him, the monkey happily returns to his home in my wallet.

“Cannot bring this. Too dangerous.”

“Please show me.” He touched to the pointy bit and ran his hand along the inner edge as if playing with a scalpel. I took it from him and then vigorously sawed my index finger for 10 seconds without a hint of injury.

He then called over his boss, a serious looking woman of 30. She asks me what it is for.

“I opened cans and bottles with it. It can skin an orange. It even has a screwdriver.”

“Aha. That is the reason. Screwdrivers are forbidden.”

About this time, I realize that Susie is having similar fun of her own. Having thoughtfully packed her small scissors in her checked luggage, she could not imagine what was putting the guards into a Code Red.

It turns out it was tweezers, fingernail clippers and baby nail clippers for removing hangnails (you know, the ones so benign that even a toddler cannot find a way to wield havoc with them?).

Three feet from her was an incredulous Virginia who was having the AAA batteries taken away from her headphones.

“They are not even lithium. They are just batteries. What could be wrong?”

Within 3 minutes, we were down 6 batteries, two clippers, one set of quality tweezers. And my faithful Pocket Monkey.

Liam and I were not quite ready to give up. At this moment, Liam became a tad on the unintentionally aggressive side. He walked on the opposite side of the X-ray unit to where the guard had placed our contraband (“dangerous items”). He picked them up to make a point.

I knew that Liam had crossed an unspoken barrier. The guard certainly knew that he had. Liam, however, was shockingly unaware as he was attempting to make a final point about, well, the lack of meaningful points on our items.

The guard barked and Liam retreated. Surprisingly, what followed was a reasonable compromise and not Liam lying face-down with someone’s boot in his back.

If we could get an agent of the airline to put the Pocket Monkey into our already-checked bags, it could go.   After further negotiations, we determined that we could send the Monkey and Susie’s three devices in Liam’s carryon if he were willing to check it as well. A nice employee of RwandAir made this happen and we went on our merry way, albeit still without Virginia’s batteries.

After one last check of passports and immunization records, we were in the final staging area ready to board the flight.

I have never attended a Presidential Inaugural nor entered the UN chambers while it is in session, but I feel certain that I am now prepared for anything I might encounter.

I will be ready.

With my Pocket Monkey.

PS But, you might add, these draconian standards DO help make us safer. I would agree entirely if 1) Virginia had not walked through with HER Pocket Monkey, 2) Susie and I both brought in multiple batteries in identical headphone cases as Virginia’s and 3) at least 3 other sets of nail clippers were allowed to pass through. This security felt like a court system that will dutifully process justice if a coin toss says heads, but say, “forgetaboutit” if it is tails.

PPS. After writing this, I examined the sites of the US and UK governments. Perhaps I was misinformed and Rwanda is an epicenter of terrorism.

Nope. There were two minor explosions in 2013 and two in 2014. No one is shooting anyone. Most American cities would trade for that record in a heartbeat.

They, however, did note one place of danger: the border between Rwanda and Congo. Congo is experiencing a civil war that can bleed over the border. The advice is to avoid the border.

Whatever you do, do not take a family picture 100 feet from the Congo border like these foolish people. 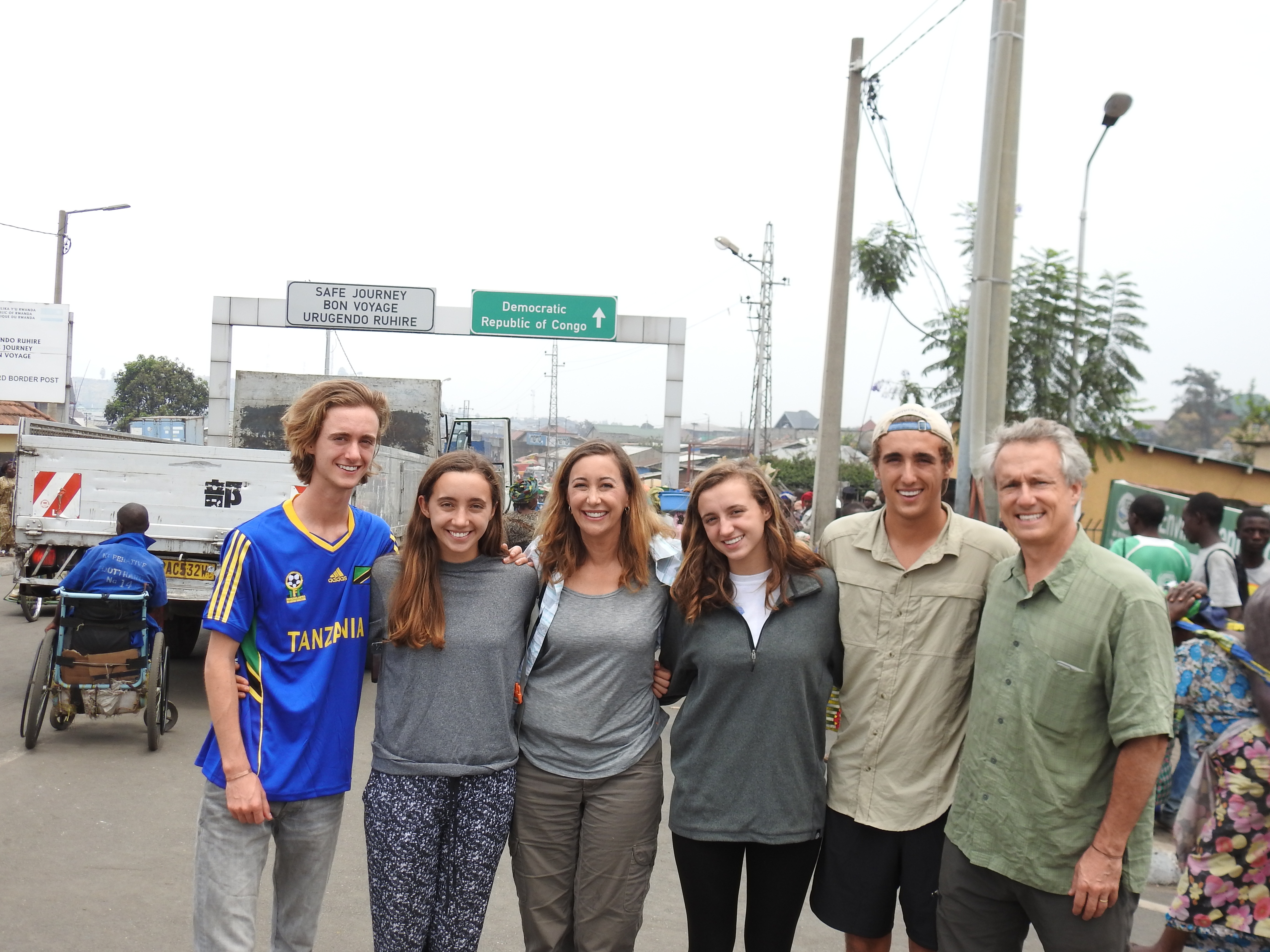