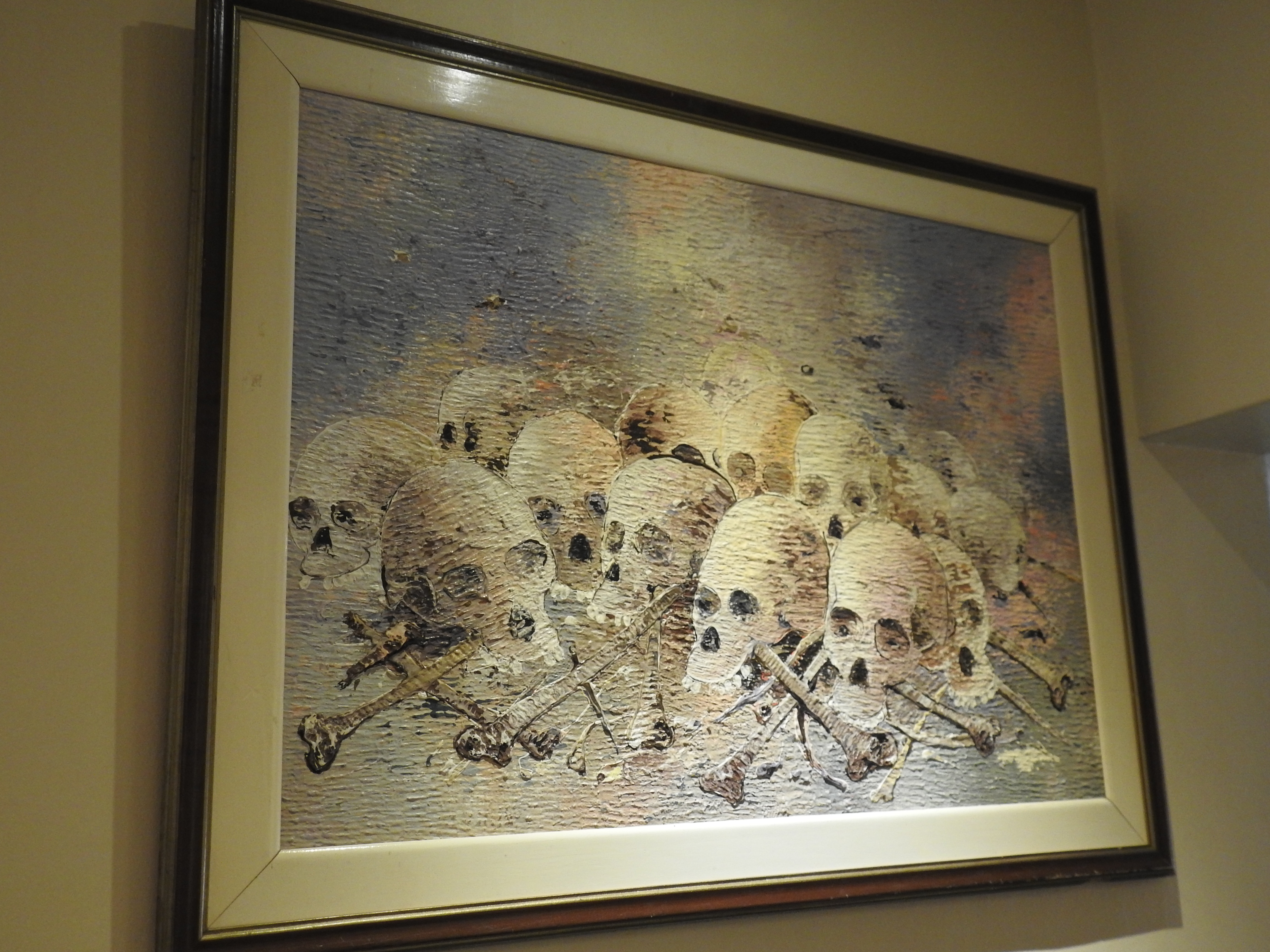 Some blogs I want to write. Today’s blog feels a bit more like a responsibility. We are in Rwanda for two reasons. First, we have come to see the mountain gorillas. We will go to the mountains where Dian Fosse first studied the gorillas. Second, we felt a need to learn about the 100 day Rwandan genocide of 1994.

I am not sure exactly how to write about genocide. I want to avoid seeming too pedantic or depressing, but I also want to give this dire topic the seriousness that it is due.

Here is my effort to walk that fine line. I promise that tomorrow will be less serious.  I will also publish a second blog for today to balance this topic.

The Rwandan genocide involved the slaughter of 1 million people in 100 days. 9 years prior to this catastrophe, the life expectancy at birth in Rwanda was 50.5 years.  after the genocide, it had dropped to 27 years. Looking at the line graph of this statistic was staggering as it showed the long-term impacts of the genocide.

But the statistics ignore the survivors and the mutilations, rapes and trauma they suffered. Basically, the Rwandan genocide was a tribal conflict where the Hutus attempted to eliminate the Tutsis. I knew that from the movie Hotel Rwanda. What I did not know was the fact much of the tribal identification had been a European creation.

Prior to WWI, Rwanda was a German colony. After the war, Belgium took possession of the country. At the time, eugenics (the study of desirable genetic characteristics) was big in Europe. As we know, this type of thinking led to the concept of the Aryan race and helped underpin the Holocaust.

What was interesting here was the fact that the Belgians introduced the concept into what used to be an essentially unified country. There were tribes called Tutsi and Hutu, but there was no real conflict. The Tutsi’s had been rulers in the past, but not at the time.

The Belgians saw that the Tutsi’s were somewhat taller and were generally more successful. They concluded that they were the “superior” genetic group.

They also made three decisions that planted seeds that would grow into disaster later. First, they declared that anyone with more than 10 cows was a Tutsis. This decision seems to undermine their believe in the infallibility of genetics, but it did create a wealth-based system (and the resentment that comes from such a system). Second, they gave substantial privileges to the Tutsis: education, governance, business franchises, etc. This exacerbated resentment. 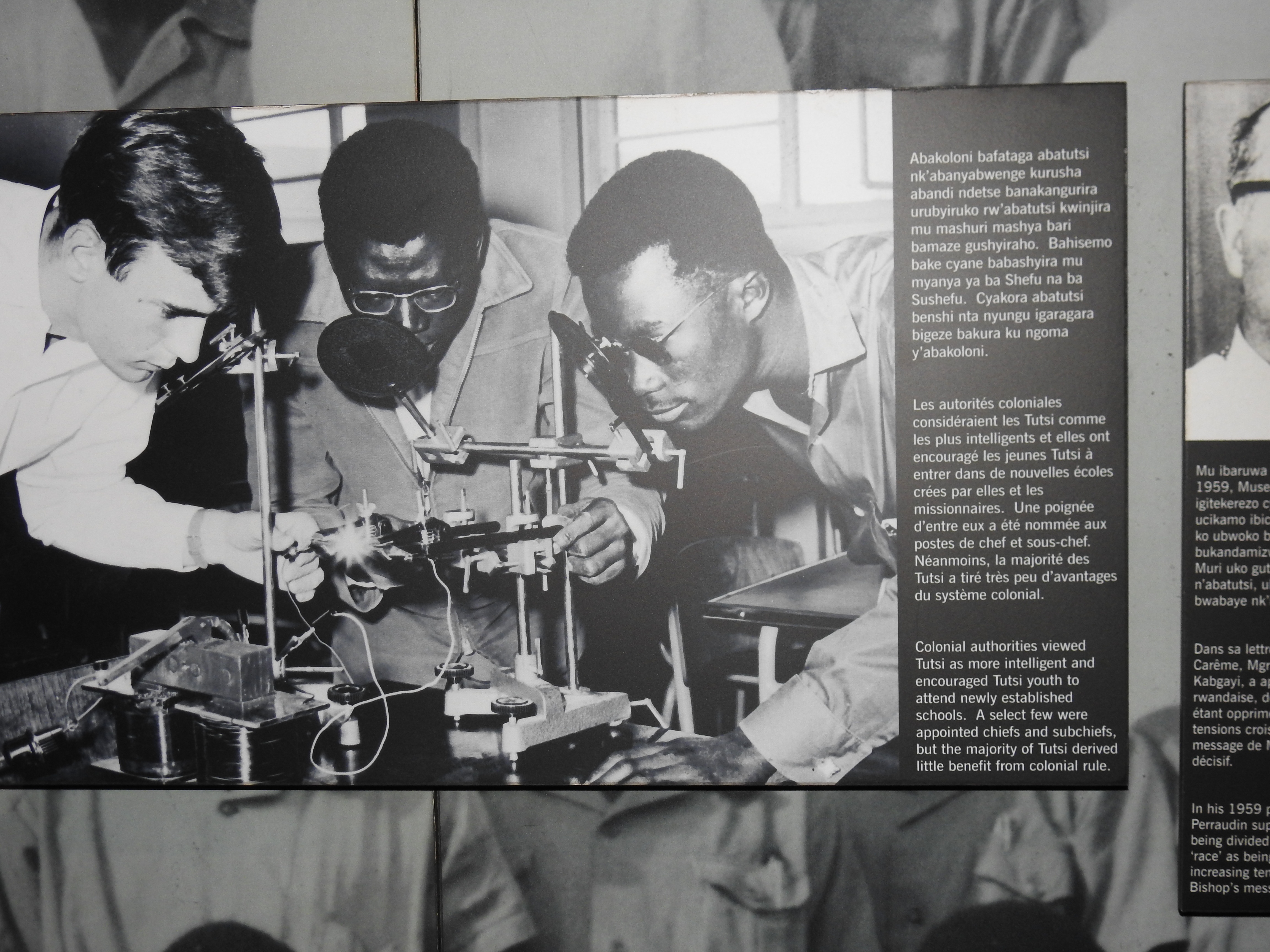 Finally, they issued ID cards to everyone that identified them by tribe.

When Rwanda became independent in 1962, popular elections displaced the Tutsis with Hutus in the government. At the time, Hutus were around 85% of the population and the Tutsis 15%.   The government established a single political party that was all Hutu.

Over time, splinter groups within this party began to develop and refine theories of Hutu Power that included strong language about the historical exploitation by Tutsis of Hutus. It also adopted language that dehumanized the Tutsis, calling them “cockroaches” and spreading lies about previous (nonexistent) atrocities. Again like the Holocaust, mass murder seems to require that the killers do not see their victims as truly human.

Many Tutsis fled to neighboring countries (primarily Uganda) since the environment was highly hostile to them. Some formed groups and parties with the desire to re-establish Tutsi presence in Rwanda. These external forces allied with Tutsis still in Rwanda. A civil war ensued.

During these conflicts, a Hutu Power militia called the Interahamwe formed and started training with equipment purchased and financed by the French, who saw Rwanda as an ally and Tutsi rebels as a destabilizing force. Various radio stations began to broadcast incendiary anti-Tutsi propaganda. 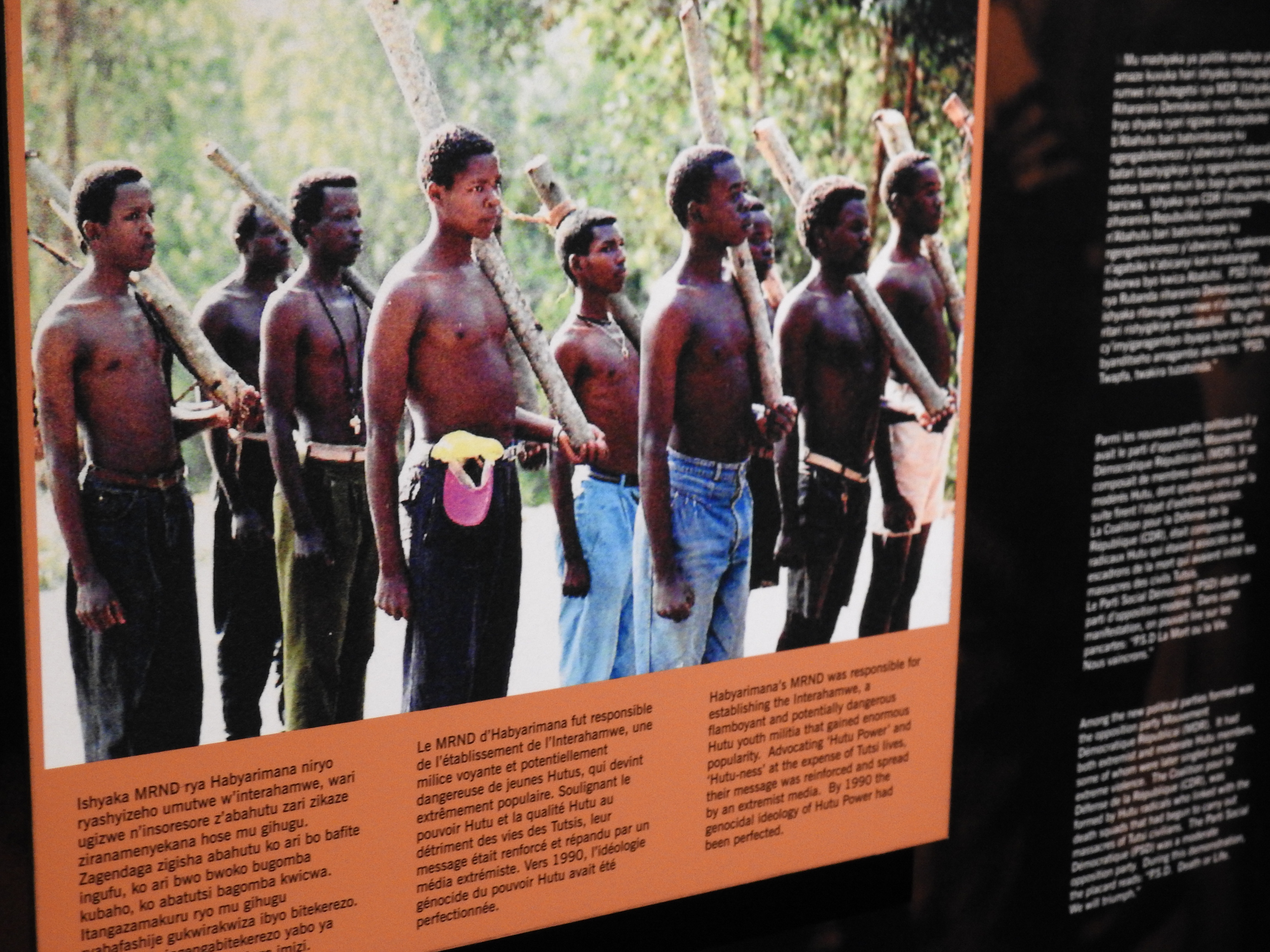 The UN and the leaders of Burundi and Tanzania brought the leaders of the two factions and spent over a year negotiating a peace accord that would end the civil war and provide for the sharing of power between the two groups.

A man named Bagasora had been part of the Hutu government and was among the most ardent of the anti-Tutsi voices. In January 1993, he departed the preliminary peace negotiations prematurely, vowing to go home to “plan an apocalypse”.

At this point, the anti-Tutsi invective continued to grow, insisting that the peace accord was a trick to allow the “cockroaches” access to the Hutu people.

Nevertheless, the President of Rwanda and leader of the Hutus flew to Arusha, Tanzania in April 1994 to sign the treaty.

After signing, the presidents of Rwanda and Burundi were flying back to Rwanda when the plane was shot down on April 7, 1994. All passengers were killed.

No one knows exactly who shot down the plane. What we do know is that the following happened within an hour:

Within the next few days, Bagarosa declared himself and his immediate allies as the leaders of Rwanda and united in exterminating the “cockroaches”.

The genocide had begun.

The Nazi genocide had been staggeringly efficient. The Nazi death camps killed in mass numbers, like a factory. They concocted plans to hide their activities from the international community.

The Rwandan genocide was not as well planned or efficiently run.   Bagarosa made no effort to hide his intent to kill Tutsis, including children and parents (to eliminate the next generation). What they lacked in efficiency, they compensated in brutality. Most killings murders were done personally with machetes or blunt devices. Parents were made to kill their own children before being killed themselves.

Neighbors who had played together mere weeks before turned on each other. We heard a stories about a 10-year old boy that told the Interahamwe which of his neighbors (adult and children) were Tutsis and then watched as they were hacked to death.

You may begin to think that this is the only such story. But it became incredibly real to us when we learned that our driver, Didier, lost his father and sister in the genocide. He told us that every single person in Rwanda was affected by the genocide. In one way, he said, he considers himself lucky that he only lost two family members. His family of six had turned to a long time Hutu friends for help, who betrayed them. His mother, two siblings and he were able to escape into the mountains where they endured famine for the years following the genocide. Didier does not identify himself as a Tutsi, saying that after the genocide, the tribes were eliminated and the identity cards no longer issued. Now they are Rwandans and unlike Tanzania, with its 120 officially recognized languages, Rwanda has just one language, which made it easier to unify the country. This shared language, unfortunately, also made it easier to communicate the horrific anti-Tutsi propaganda.

The genocide lasted for 100 days, killing an average of 10,000 each day using these crude techniques.

I will not go into the failings of the international community. It makes for depressing reading (as if the rest of this blog is cheerful). Many believe that the 5,000-person UN force that was used to evacuate internationals and certain selected Rwandans could have stopped the Interahamwe and its genocide.

But I am less interested in what could have been done and more interested in another question: how do the mass killings in Nazi Germany, Pol Pot’s Cambodia or Rwanda happen? What is the process that enables normal humans to not only accept mass killings, but actually support them? Are they the result of a confluence of evil, psychopathic minds and a cowed, ignorant or terrified populace?

Perhaps the thought that haunted me the most was a simple one: what would I have done were I in a country doing these things? We would all like to believe that we would not have tolerated anything so evil, but history shows us that very few people actually stood up. 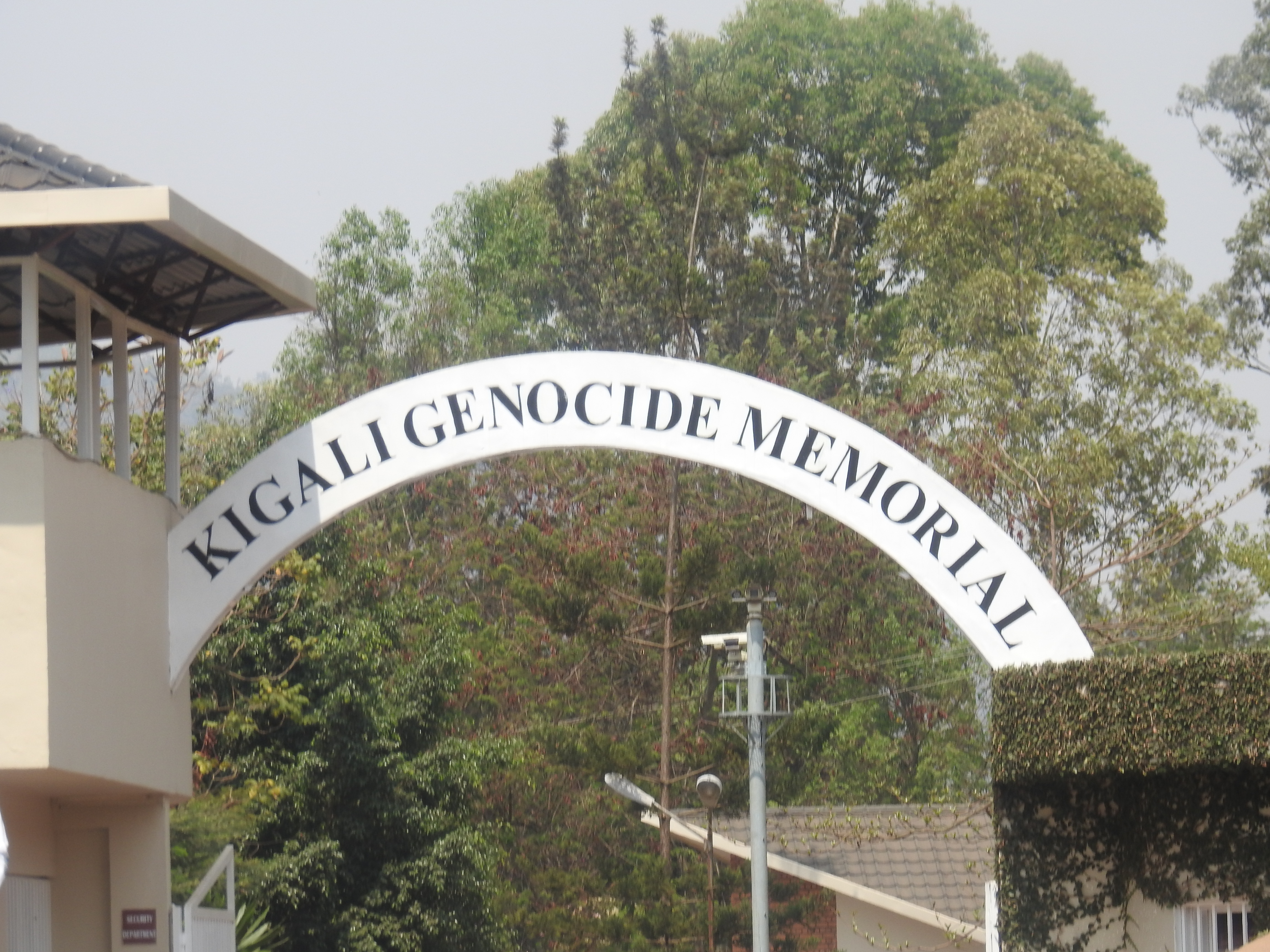 Perhaps this is one the reasons to visit places like the Holocaust Museum and the Randa Genocide Memorial: to help build our resolve to avoid anything like this happening again. It is important to see the factors that lead to genocide and to resolve to fight it when it happens.

PS Tomorrow, we will return to travel, animals and our trip.