The Battle of the Bills 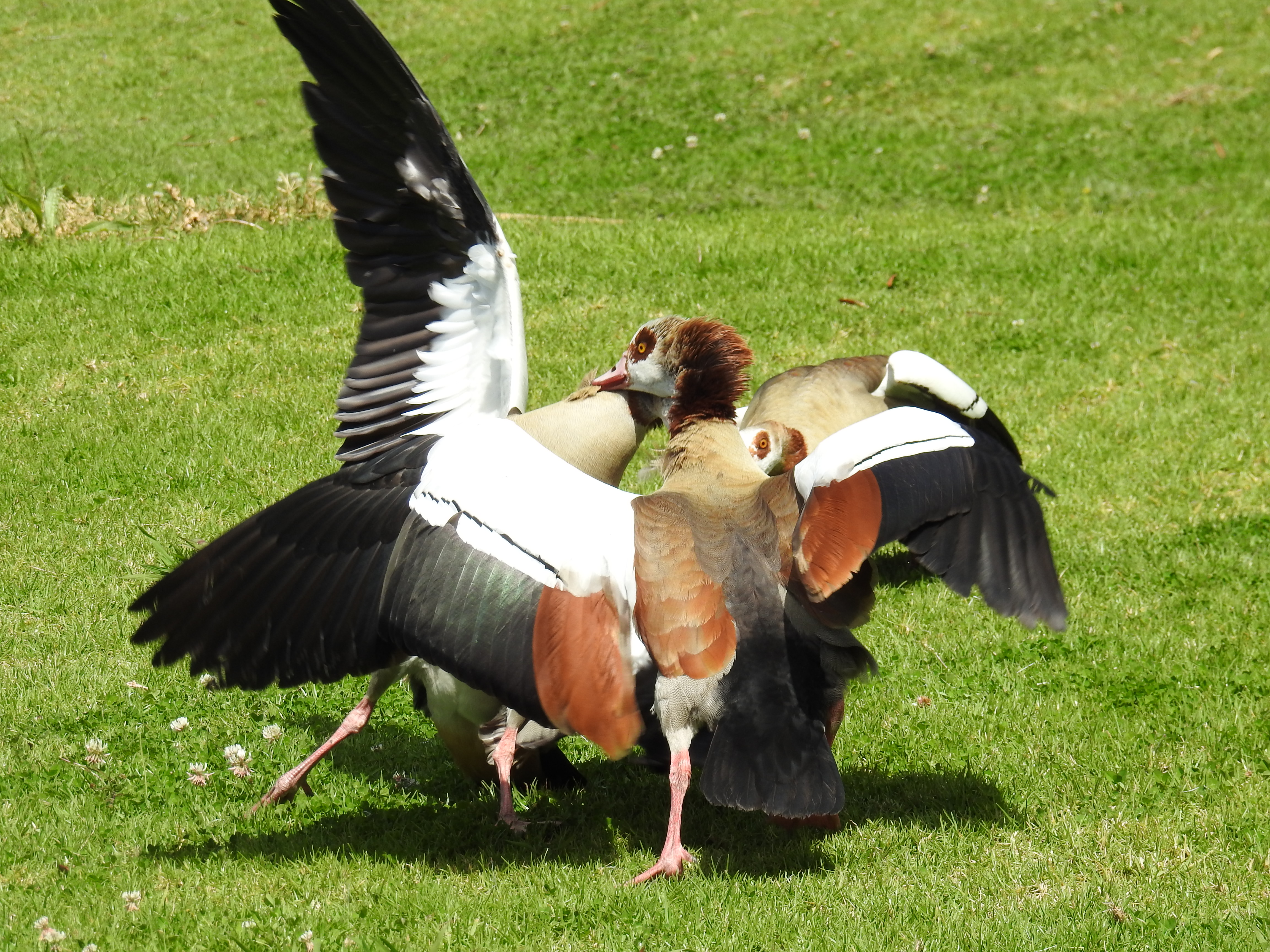 There is an inverse relationship between the comfort of a location and the quality of the blog it induces.

When we were Tanzania and Rwanda, each day produced something worth sharing, from lion hunts to travel challenges.

But we are now in South Africa. In fact, we are in the most refined and lovely part of South Africa. Being here is more like being in California than in most of Africa. Signs are in English, highways lead to multiple quaint vineyards and each street seems to feature a coffee house or art gallery.

Here Terrill poses with a cute elephant jacket she got at a groovy boutique next to a sculpture of an elephant. While nice, this is not riveting stuff to read about. 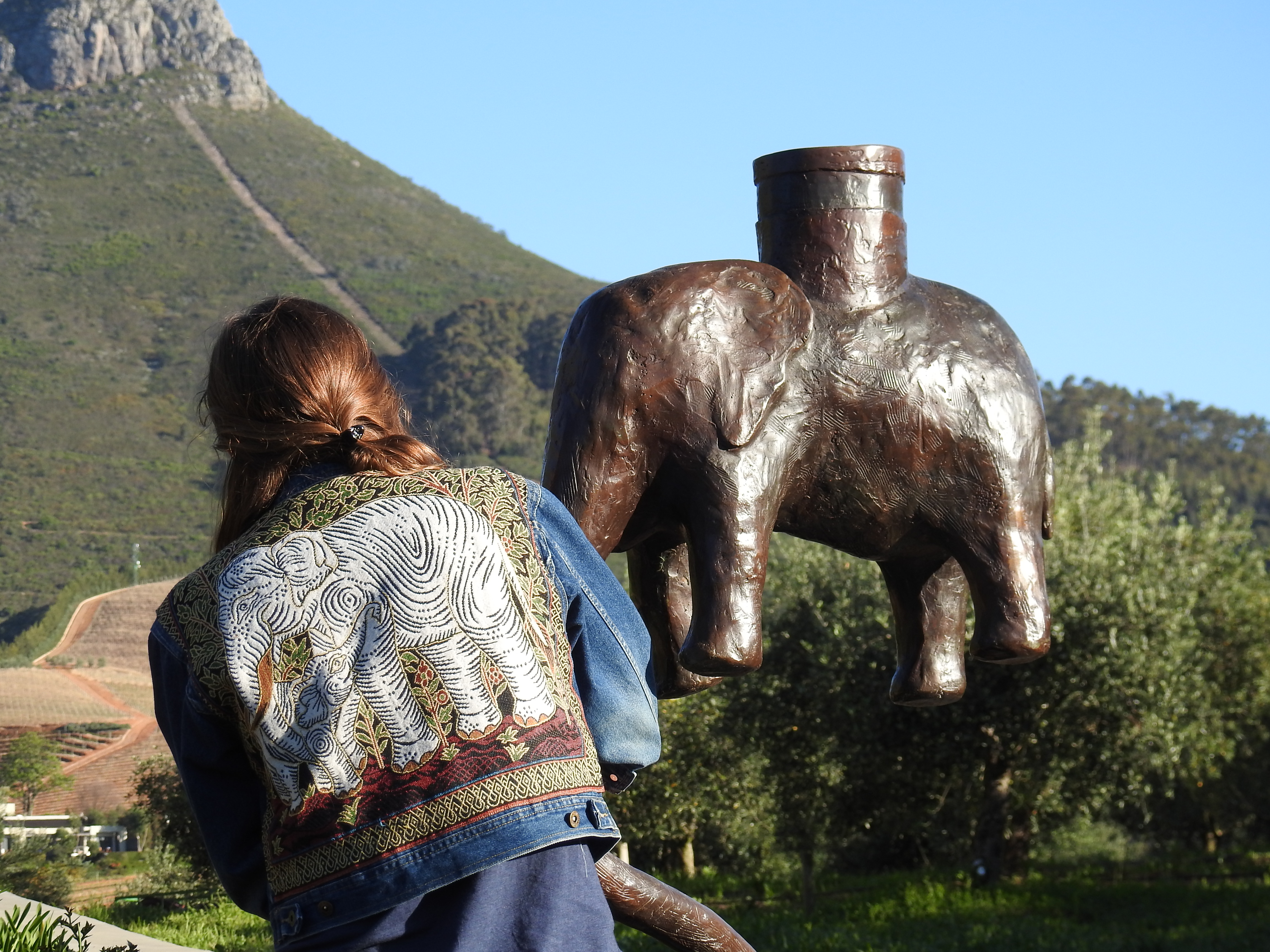 So we have enjoyed comfort and beauty, which is pleasant.

But it makes for boring blogs.

I certainly did not expect to have anything to report from our day at the Kirstenbosch Botanical Gardens. I expected to see trees and flowers and enjoy a healthy stroll. 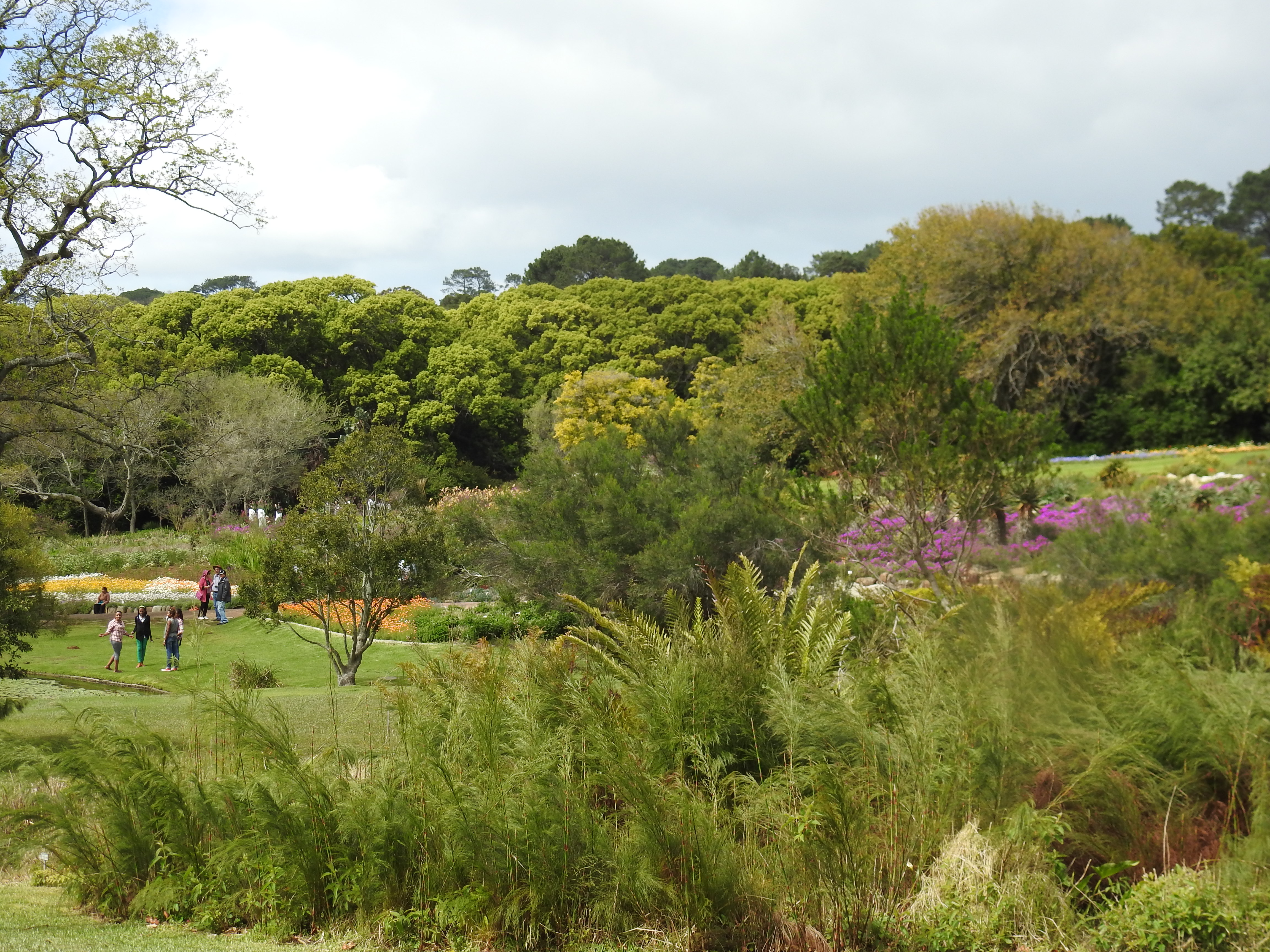 I did not expect to see a battle. Typically, I do not expect to see violence in a garden.   Perhaps I have been going to the wrong gardens, but I have never seen anything quite like the Dynamic Duck Duel we witnessed.

While I would like to report to you that we were merely witnesses of a random event, I fear that Virginia was the catalyst of this conflict.

Virginia is a lover of animals, but she has an odd track record with waterfowls. When we were in New Zealand, we were feeding ducks outside our campervan. One juvenile duck was very friendly with Virginia, friendly enough to come inches away from the 10 year-old impish gal. Virginia picked up the almost adult duckling, inducing some impressive protestation from the duckling’s mother.  Here is the picture we took 5 years ago. 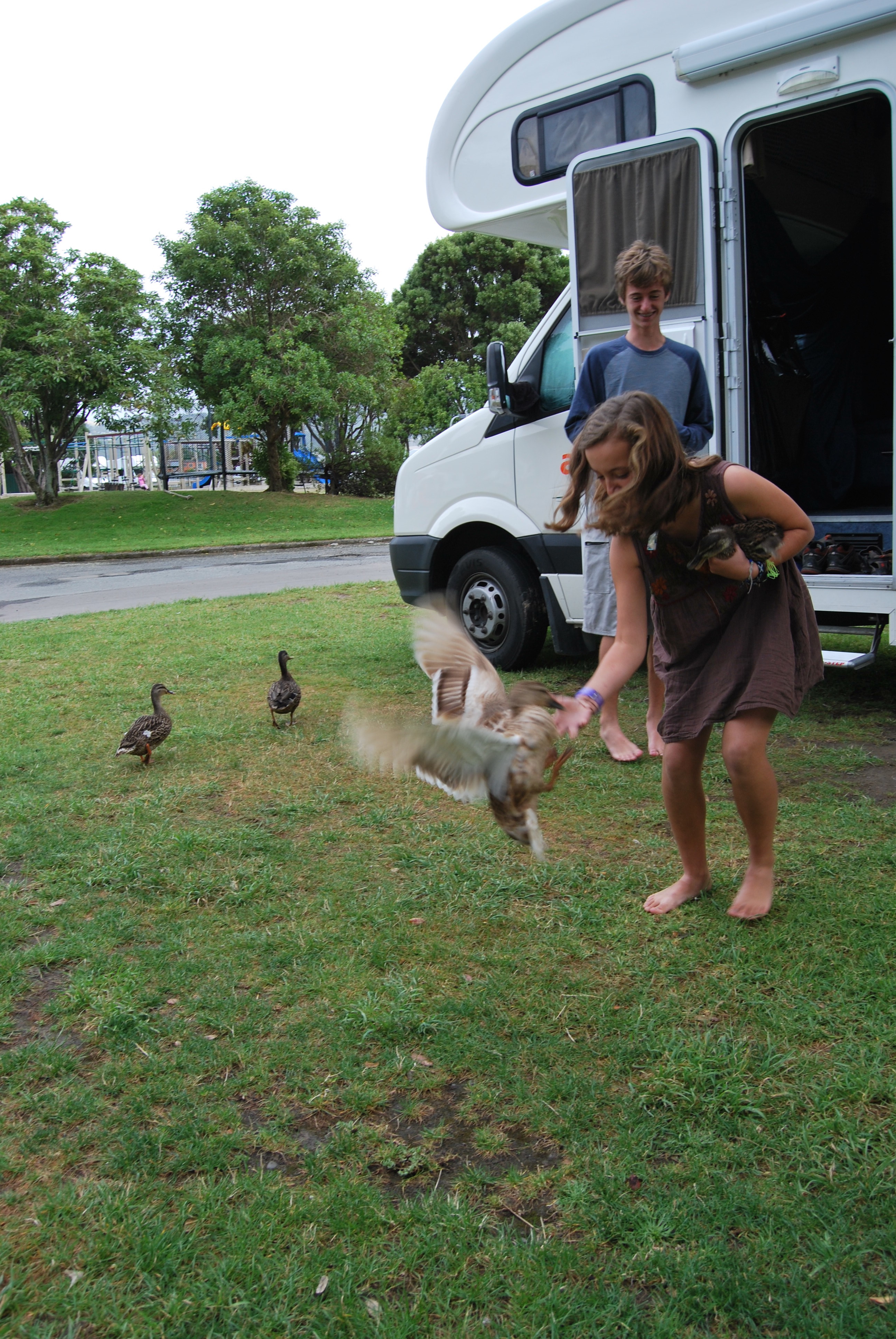 The anger of that duck made sense to us. Parents will protect their children. Got it. Good safety tip.

But the excitement today was much less expected.

On our trip to the botanical gardens, we encountered a group of ducks. At Camp Champions, we call this particular breed of duck “vampire ducks” because the girls’ side of camp think their reddish eyes look vampire-esque. [Note: to my knowledge, I am fairly certain that there are not now, nor have there ever been, vampires at Camp Champions. But that does not seem to reduce the certainty of the campers regarding the appearance of vampire eyes.] 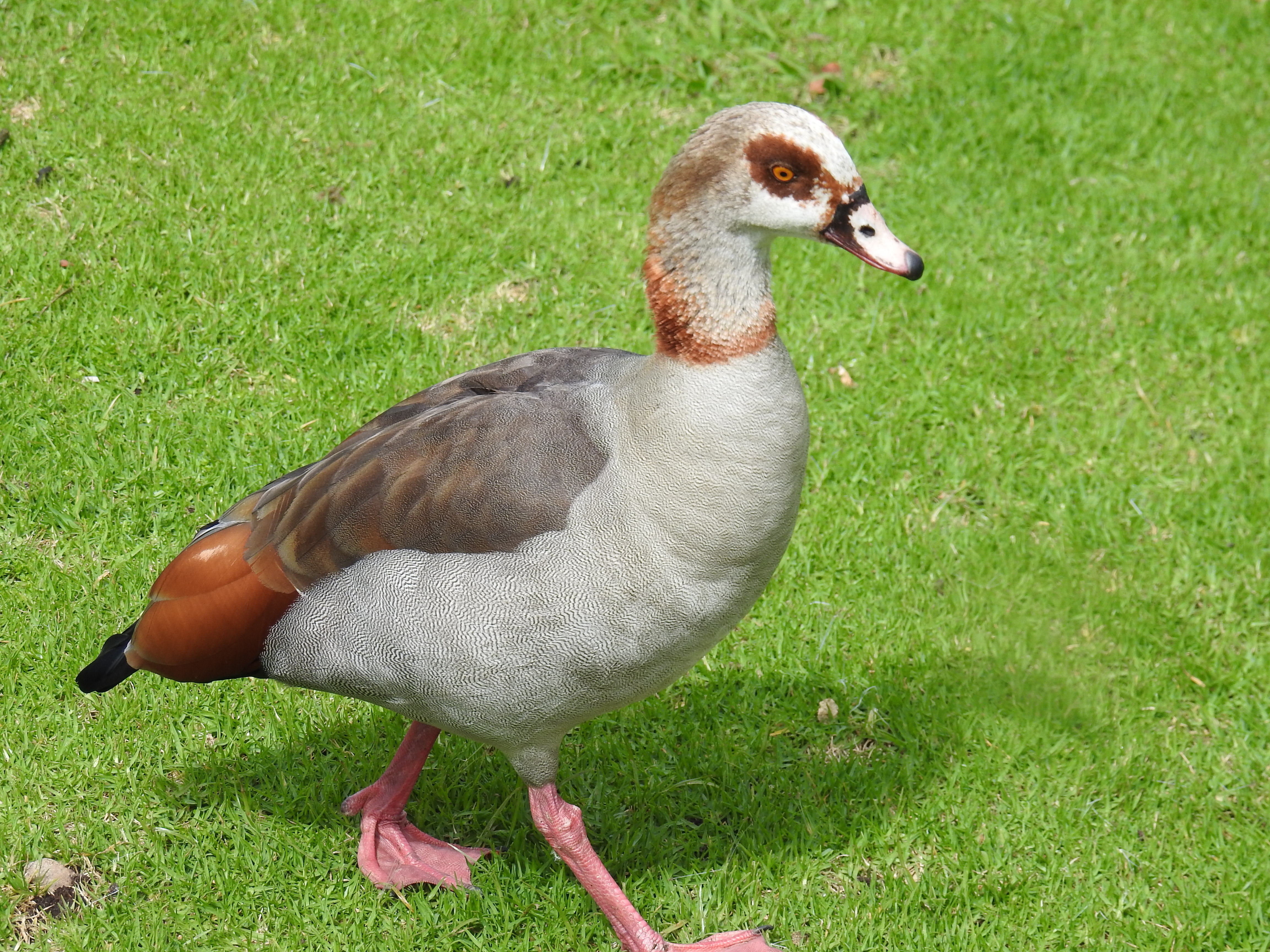 Once again, Virginia wanted to connect with the animals. She began to follow a pair of ducks, one male and one female. They waddled and she followed. It looked like great fun, at least until the moment the female duck changed her quack. [Note: In case PETA is reading this article, I want to say three things. First, welcome to the blog! Second, what are you doing reading this blog? You should be out protesting. Finally, I want to assure you that she was not being cruel or mean. She was just walking behind the female duck. It is simply my view that she (the duck, not Virginia) just panicked.]

Once the female’s quack changed, the situation altered as well.

Suddenly, another male literally swooped in to help. While we are not experts in duck behavior, we can only assume that male ducks respond to distressed females as if it were a mating call.

When the new hero flew in, the existing male took great offense at his arrival. Perhaps the original male felt his masculinity was questioned, but something ruffled his feathers (sorry, could not resist).

What ensued was unlike anything I have ever seen.

It was much more than a tussle or a skirmish. It was a battle royale. They grappled, bit, kicked and punched.

“But Steve”, I hear you say, “Ducks have no fists, how can they punch?”

Unless I saw it, I would have agreed with this observation. Ducks would have happily resided in the “Animals That Do Not Punch Things” list. But “punch” is the only applicable word. They used the joint in the middle of their wings to hit each other while biting their opponent’s neck. This was not a short-lived melee, but one that lasted a full 20 seconds.

Trigger Warning: those of you sensitive to duck-on-duck violence should avoid this video as you may find it fowl.

While the battle ensued, several things happened at once. We got closer to watch the interaction. Similarly, a sweet Danish-looking couple came over and kept saying “someone needs to break up this fight.” The female duck quacked at the fighting males the whole time. What on earth was she saying? “Stop it!”? “Grow up boys”? “Get him in the tail feathers Clyde”? or “The human girl, you fools, get the girl”? Finally, two guinea hens hurriedly crossed a wide field to get close to the action. I can see no evolutionary advantage to approaching a pair of fighting birds if you are a smaller bird, but they did so anyway. I can only compare it to 5th graders responding to the words “fight” and then dashing madly to the playground to see the conflict: the guinea hens were just there for the show. 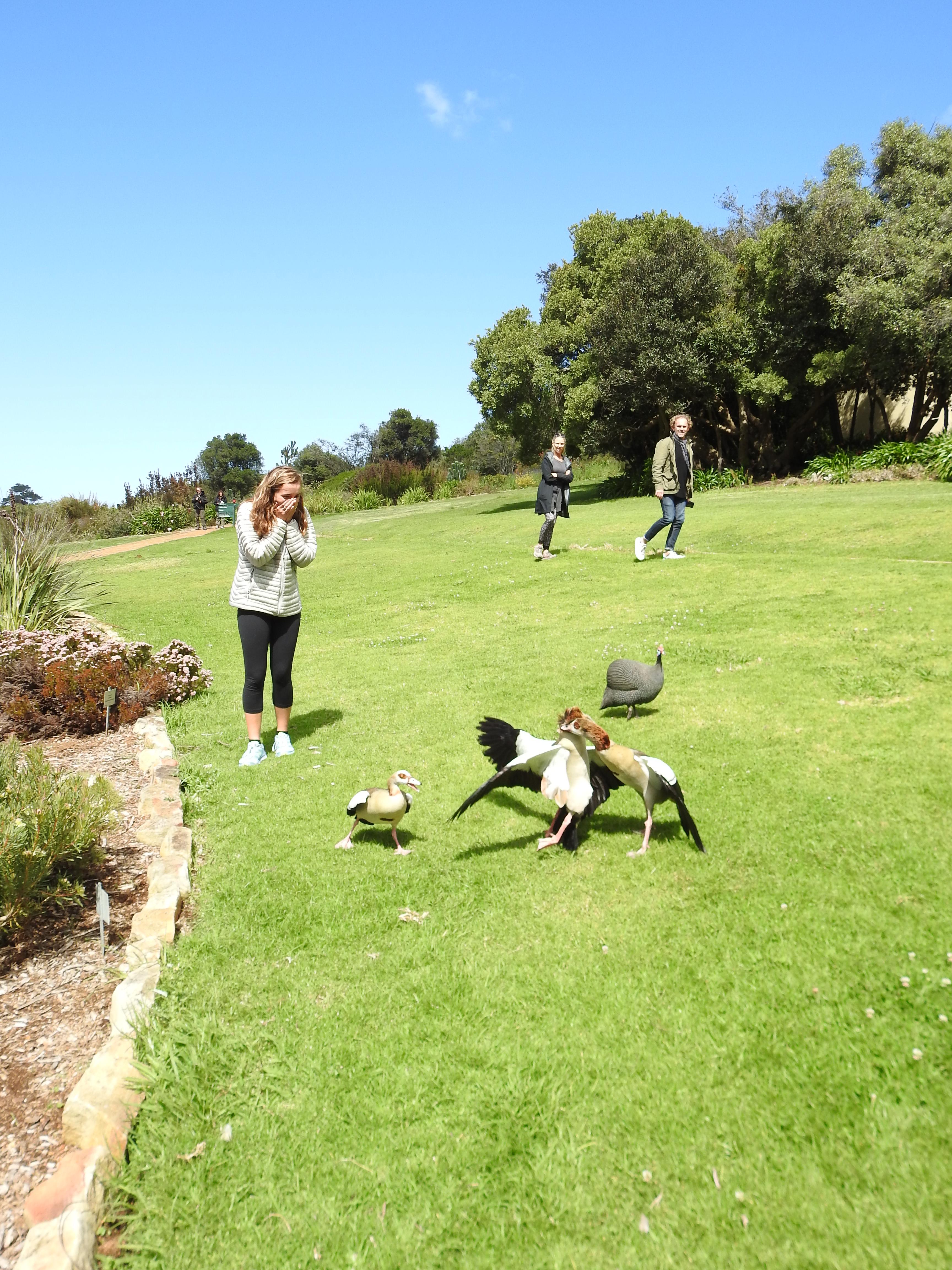 I captured almost all of this in this shot. You see the fighting birds (and their eyes), the female calling to them, the spectator guinea hen, the two Danes and Virginia. I wish I could report that Virginia’s expression is one of horror and concern, but she has put her hands to her face because the entire spectacle struck her as ludicrously funny. She simply did not want to offend the Danes by laughing out loud.