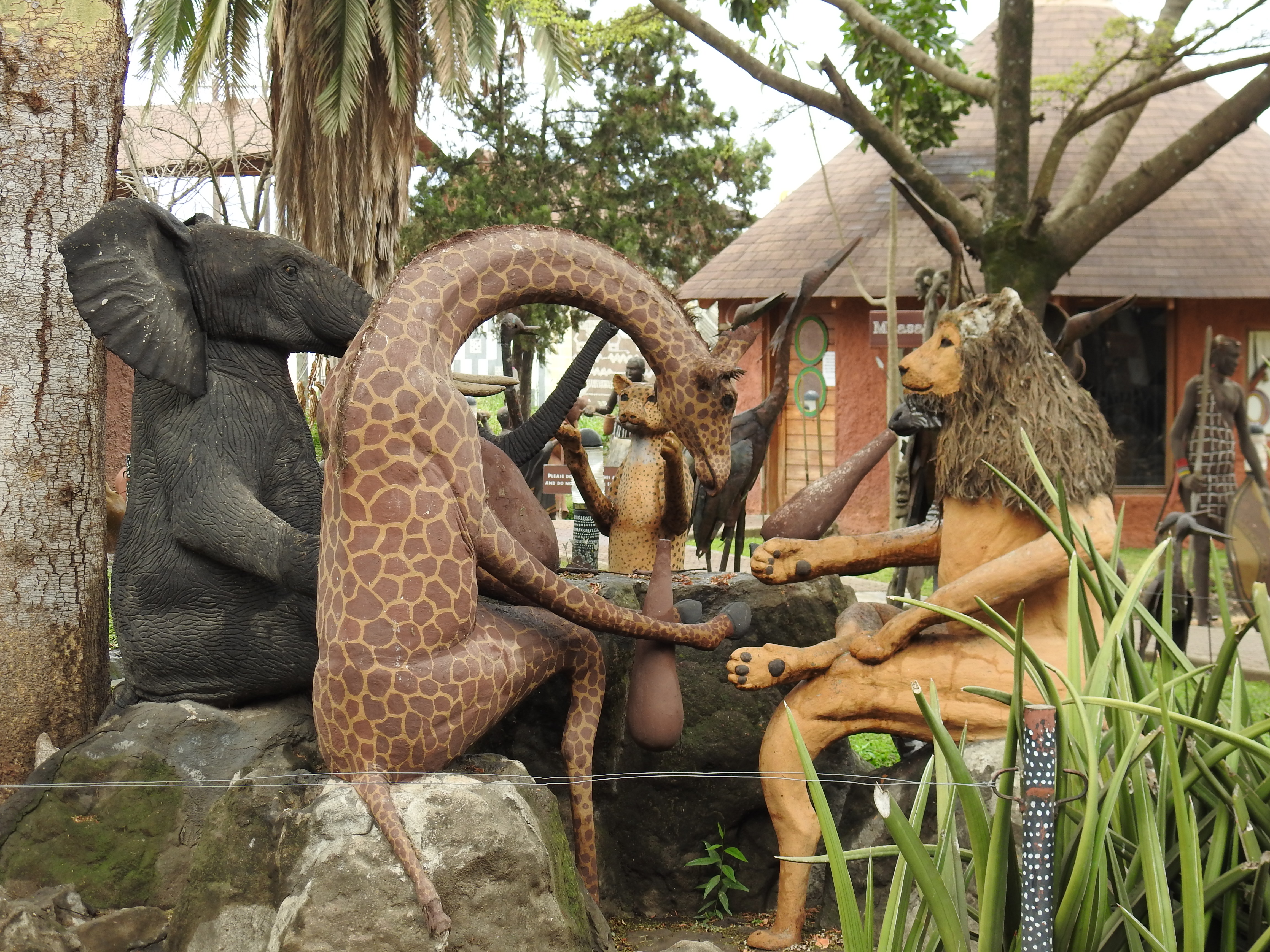 Most of my articles have had a unifying topic. Today, for your amusement, I offer you a hodgepodge of quotes and shorter anecdotes from Tanzania.  I know we have left, but I thought you would like these.

When we first started our safari, we noticed that Walter had procured one set of large binoculars. While admiring them, Susie noticed writing on the side of them,

“These binoculars say that are triple tested.”

“Hmm,” I thought out loud, “I wonder how they test them.”

While driving toward Tarangire National Park, Walter’s phone began to ring. It took me a moment to recognize his ring tone.

Kenny Rogers “Coward of the County”.

My mind began to race. Why that song? How does he even know about a pop country song from the late 1970’s? Did it have emotional significance to him?

I eventually chose to romanticize his selection. Perhaps Walter’s father, like hero in the song, had taught him to eschew violence only to have him successfully defend himself against a room full of reprobates. I want to believe that is true.  In fact, I chose not to ask him so that I can hold onto this visual image.

We asked Walter about the safety of Tanzania. We had heard that South Africa can be quite unsafe and we wanted to know what to expect.

“There is very little crime, and almost no violent crime. We mostly only have petty crime.”

Our schedule in Tanzania and Rwanda has been very structured. In South Africa, on the other hand, our plans are much more fluid. We have some things we know we will do (visit a friend’s camp outside Johannesburg, see the Cape of Good Hope, visit some wineries), but we are still crafting our exact plans.

At the top of Susie’s list was seeing Great White Sharks while in a submerged in a shark proof cage.

Notice I said “was”.

While blogging in a lodge near Tarangire National Park, we met a family from the Midwest who was also traveling throughout Africa. They were in their last days and had already been to South Africa. We asked if they had swam with sharks.

Each of the four family members reacted with a simultaneous groan.

While their reaction was consistent, their reasons varied.

The mother started, “I love boats. I have been a sailor my entire life. But I got seasick. Hell, half the CREW threw up too. We were anchored off-shore in rolling waves. That was terrible.”

The younger daughter had a different issue, “I am quite sure I have never been that cold. It took me two days to get my core temperature up. Sure they gave us dry suits [Note: a dry suit is much warmer than wet suits.], but that did not help at all.”

“Yeah,” the dad added, “I was worried about hyperthermia.”

The older daughter chimed in, “Yeah, it might have been worth it if there were more sharks. We only saw a few since they head north towards warmer waters in the winter.”

Dad concluded, “So apart from the nausea, hyperthermia, the rarity of the sharks and the expense, it was a perfect day.”

Within moments of arriving in either Tanzania or Rwanda, you notice that huge numbers of people wearing t-shirts and jerseys from the US or Europe. I have seen Messi jerseys, Kobe Bryant Lakers gear, Old Navy shirts, Boy Scout button-down shirts, Disney items and college paraphernalia.

We have seen half of the Big 12 represented here.   [Note: for any non-NCAA football fans, you should know that the Big 12 has 10 teams in it, while the Big 10 has 14. I fear these math errors might endanger our nation’s status as the leader in higher education.] We have seen UT twice and Kansas, OU and TCU once each. One of our guides was even wearing an Oklahoma State sweatshirt. 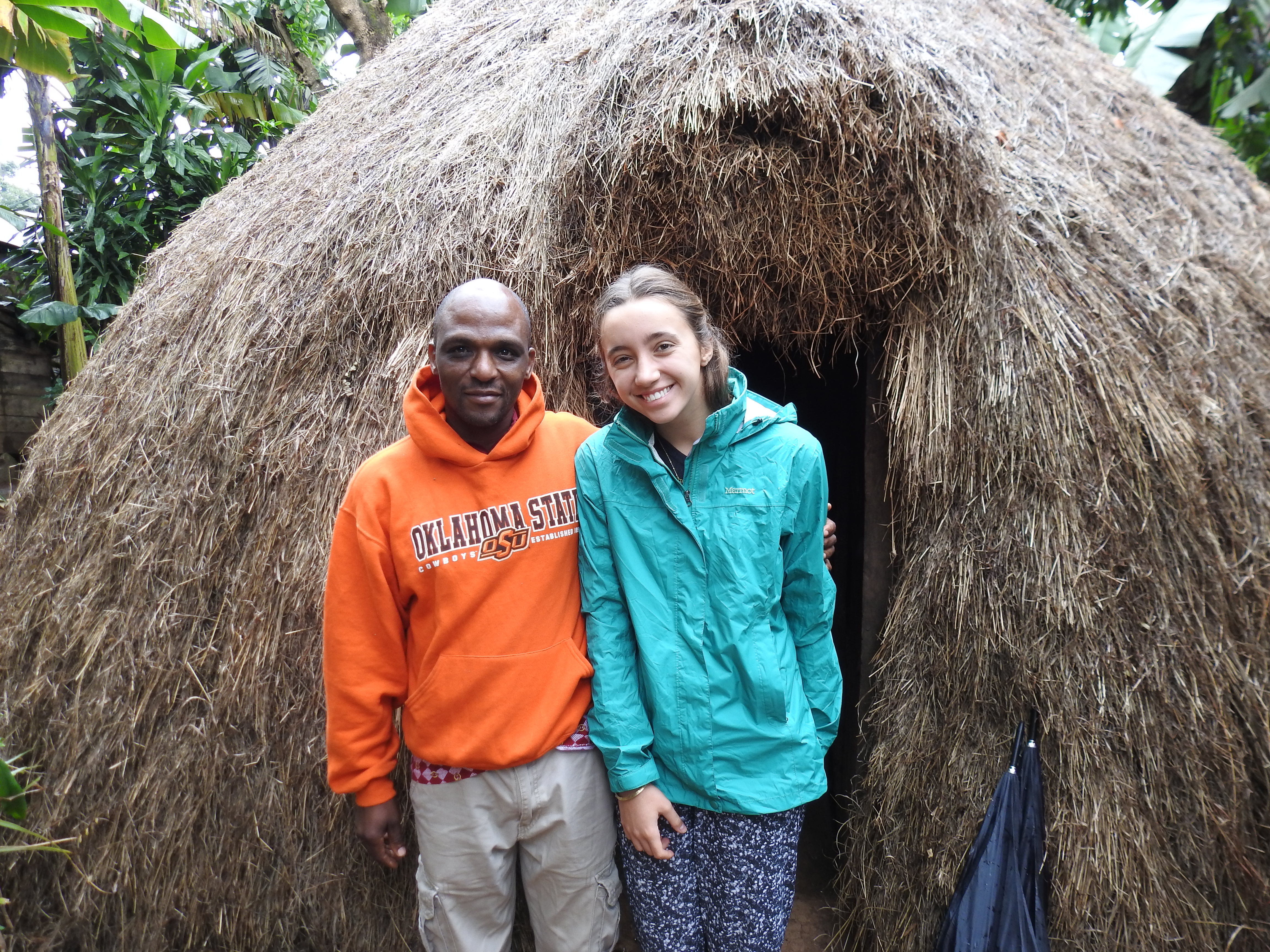 Our future Longhorns (Liam and Terrill will be doing Plan II and Business Honors when the return) were excited to see this woman. 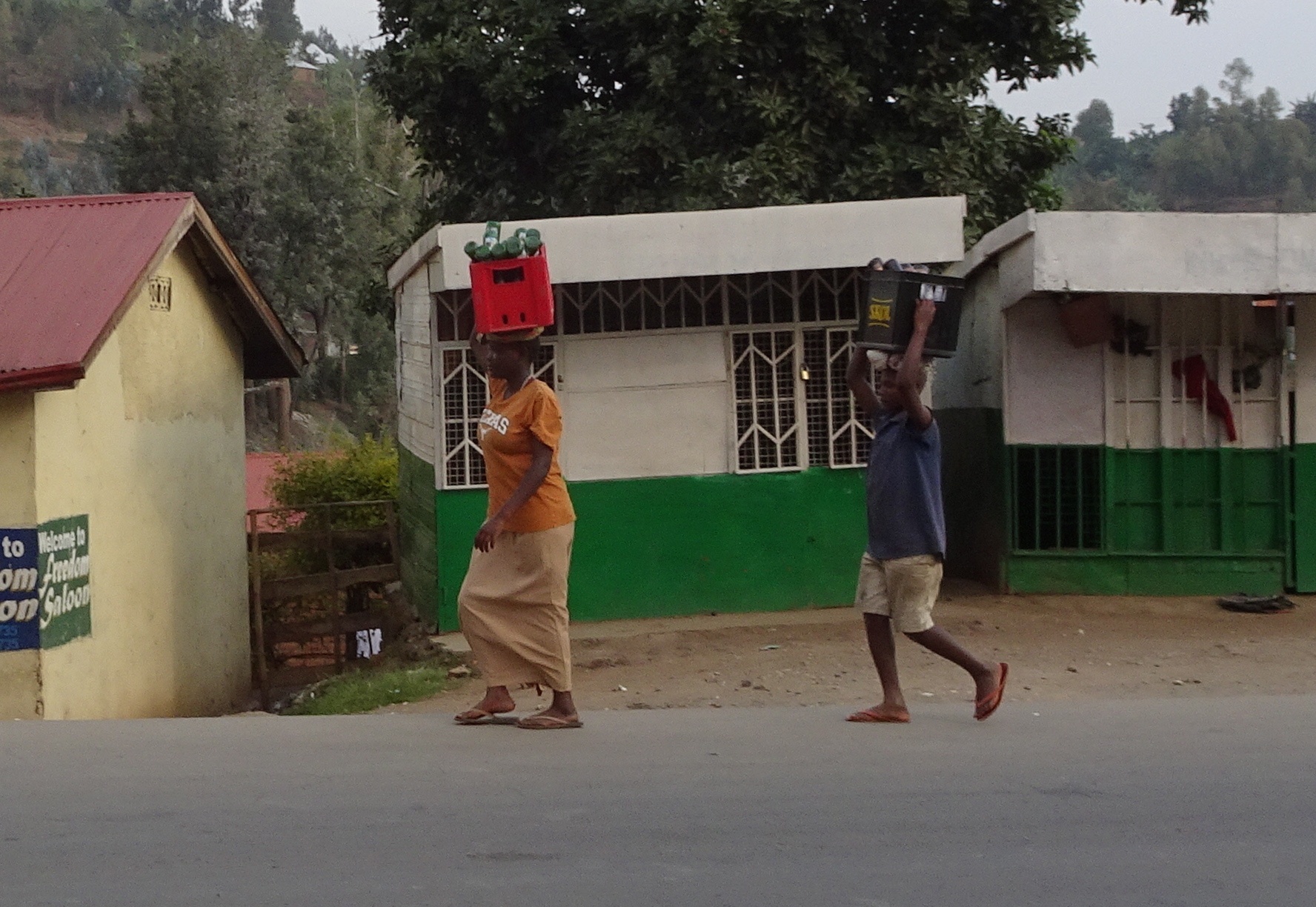 Susie read that some of these shirts come directly from US charities, but many are part of a mild scam of US charities. Some unscrupulous entrepreneurs convince US charities that they will distribute the clothes when they actually resell them. It’s a big problem, as indicated by the long front-page article in the national Tanzanian newspaper. Their ultimate concern was second hand clothing would make it difficult to grow the textile industry in Tanzania and other East African countries.

Liam and I both felt like our trip had become a bit to curated for our tastes. When we visited St Judes, we both wanted to go off the beaten path. Walter mentioned The Water Hole, a local pub.

Actually, it was a shack with a bar, an uneven dirt floor and a pool table.

Just what the doctor ordered. [Note: sometimes I wonder how people from similar backgrounds could develop very dissimilar proclivities. I have always had a soft spot for dives with pool tables and local flavor. My sister, on the other hand, will be happily capable to put “never entered a pool hall” on her tombstone. Many years ago, I managed to lock my keys in a car outside a Midland pool hall. A college housemate and I were playing during a holiday. Becky was happy to bring me the backup keys, but only on the condition that she would not have to come inside.]

Liam also struck up a conversation with a group of locals who were cooking on an open grill. Judging by their speech patterns, they had been enjoying more than their share of Kilimanjaro beers.

After Liam and I played 5 frames, one of the locals challenged Liam. Had the local been less inebriated, I suspect he would have beaten Liam, but Liam took him for 2 out of 3 games. 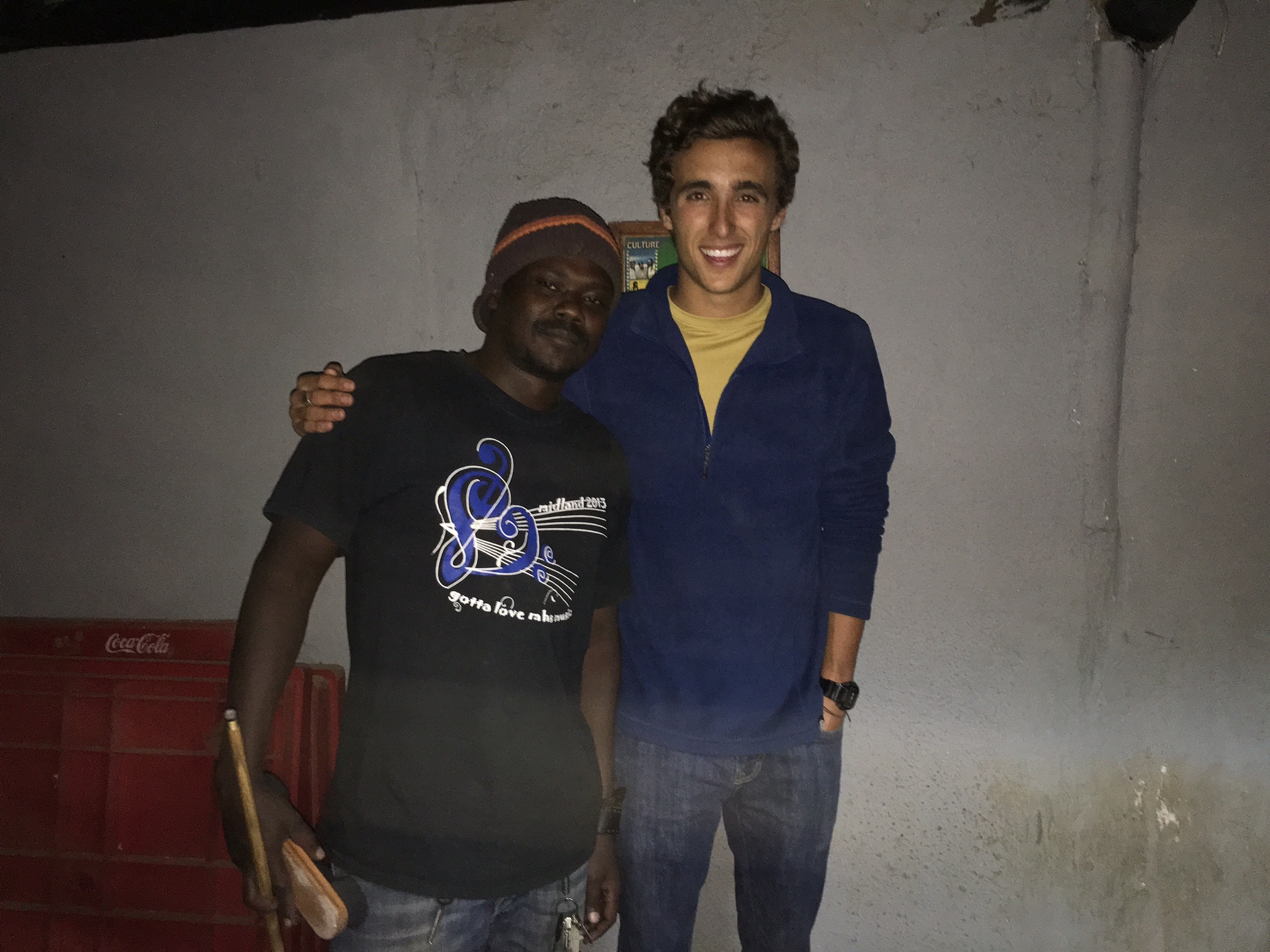 It was only after they finished playing that I noticed his shirt: 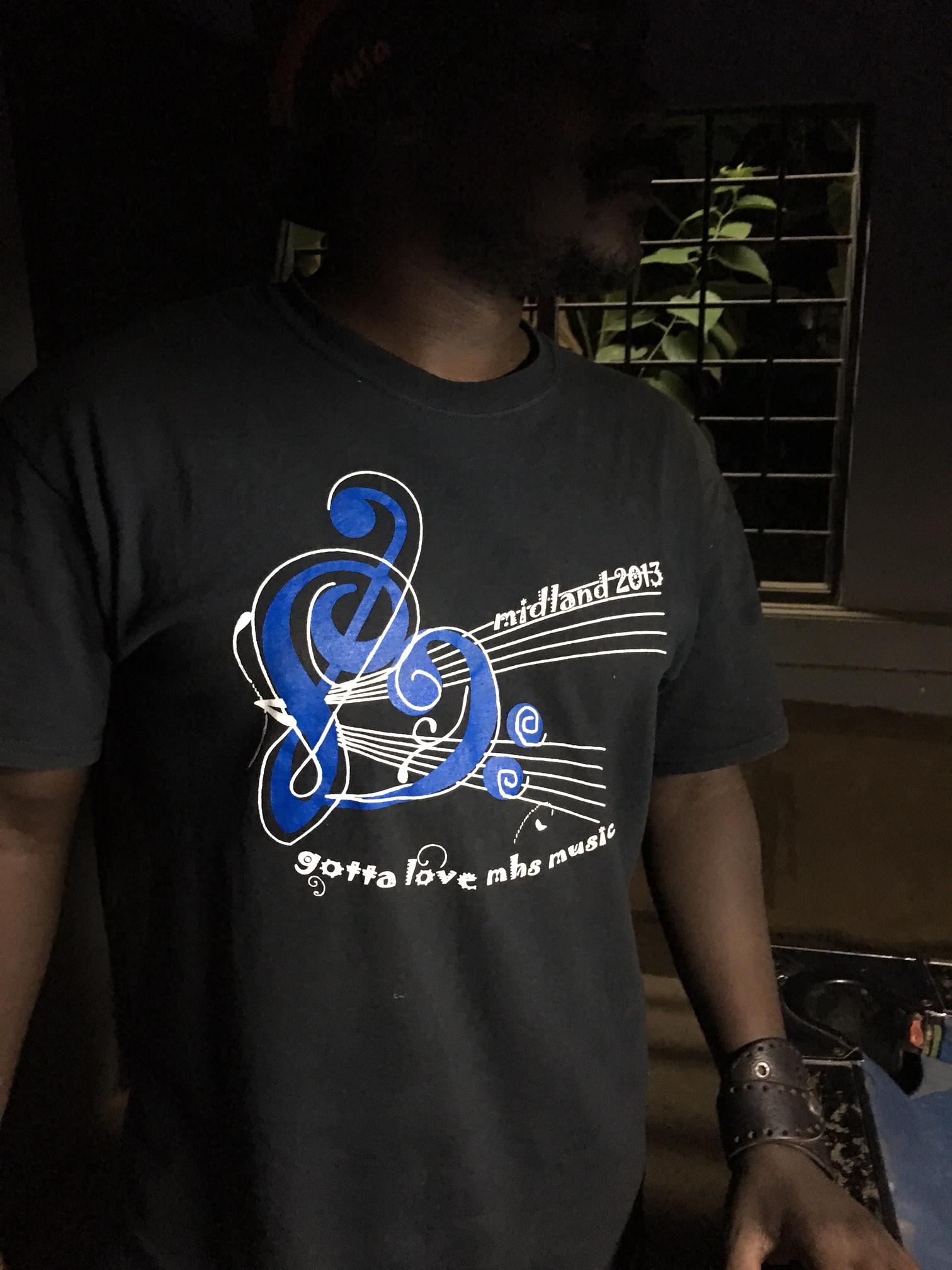 While there are several US cities named Midland, my hometown of Midland, TX is the largest. Midland High School also has an extremely enthusiastic band booster group. I am completely convinced that this shirt is from the same high school band I had been a part of 34 years ago.

While touring her orphanage, Mandy showed us the bio-gas stoves she had installed. We asked how they work.

“They are completely powered by cow dung.”

“Where do you get the manure?” I asked.

“The villagers bring buckets everyday to help us.”

Wiley leaned in to me and shared, “She helps educate the children and the village gives her crap for it.”

The Battle for the Wildebeest

In western economies, governments often compete to bring large corporations to their shores. As we see in the recent news, Ireland provides incentives for companies like Apple that the rest of the EU wants to undermine.   Towns vie for mid-sized companies and large cities promise stadiums for major sports franchises.

So I guess I should be a little less surprised at the great Wildebeest battle.

Tourism is now the number 1 industry in Tanzania. Similarly, the Kenyan economy is heavily dependent on tourists. [Note: their dependence on western tourism was made abundantly clear during the ebola scare. Tourism dropped massively. While this might seem to make sense at first, it makes less sense when you realize that Western Africa (where ebola was happening) was closer to London than to Tanzania. It would be like saying “we shouldn’t go to visit Seattle because there are Zika cases in Miami.”]

The Great Wildebeest Migration is a serious draw for tourists. About a decade ago, Kenya realized this and created a plan to increase the amount of wildebeest on their land. They began a “controlled burn” program. When the animals are not in an area, they would burn the brown grass. These burnings activate the grass seeds and enrich the soil. The next time it rains, the grass is green. Green fields attract more wildebeests which also brings more exciting predators like lions.

Starting 5 years ago, Tanzania started to do the same thing.

Yes, we now have the Battle of the Burns.

On the day we decided to get our souvenirs and crafts, the kids thought we were taking too long. Here, Virginia joins a friend to note her displeasure. 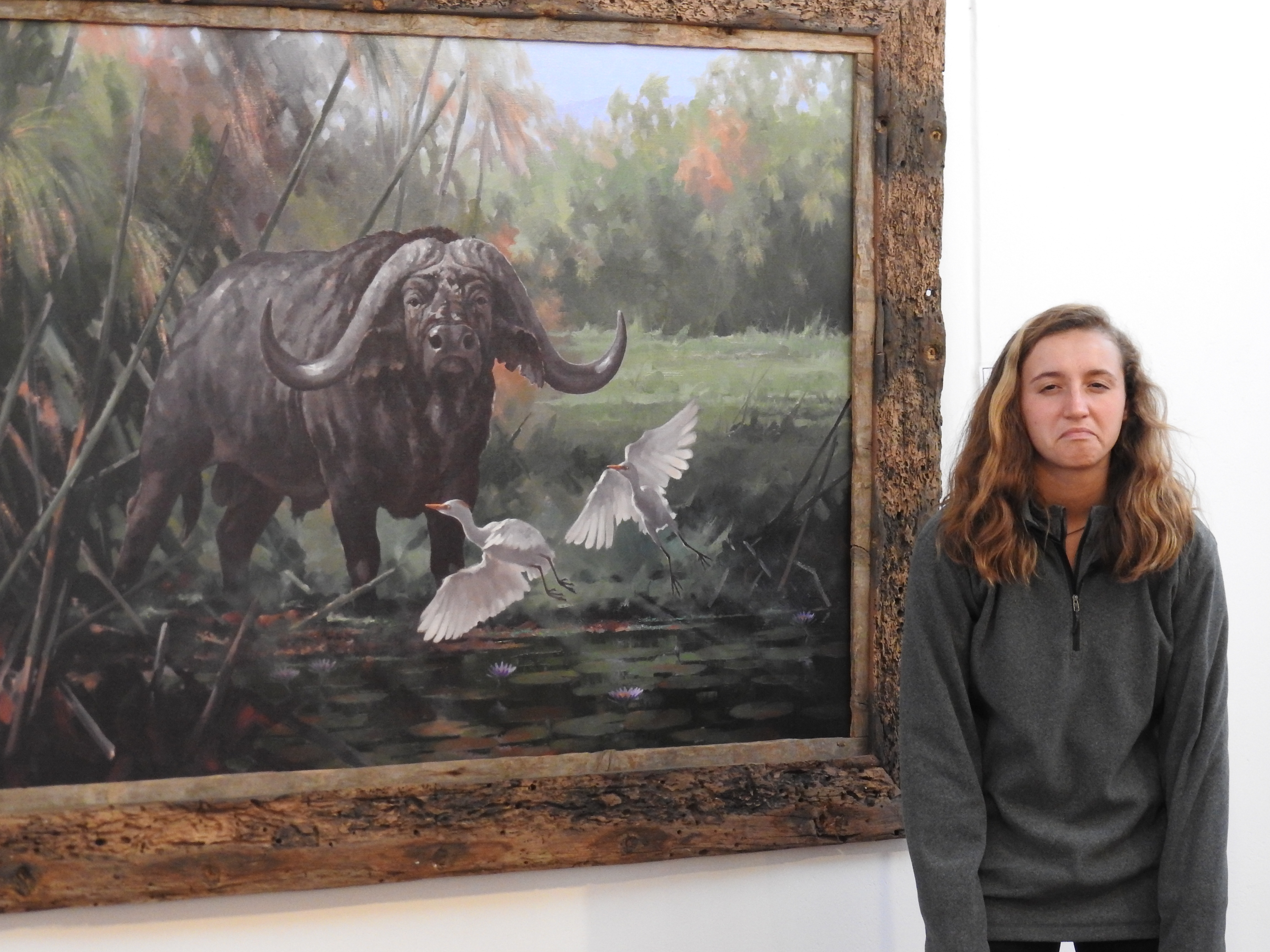 Remember Onesmo, our budding entrepreneur who managed to sell us necklaces we did not need while providing an important lesson in value?

Well, we saw him again. 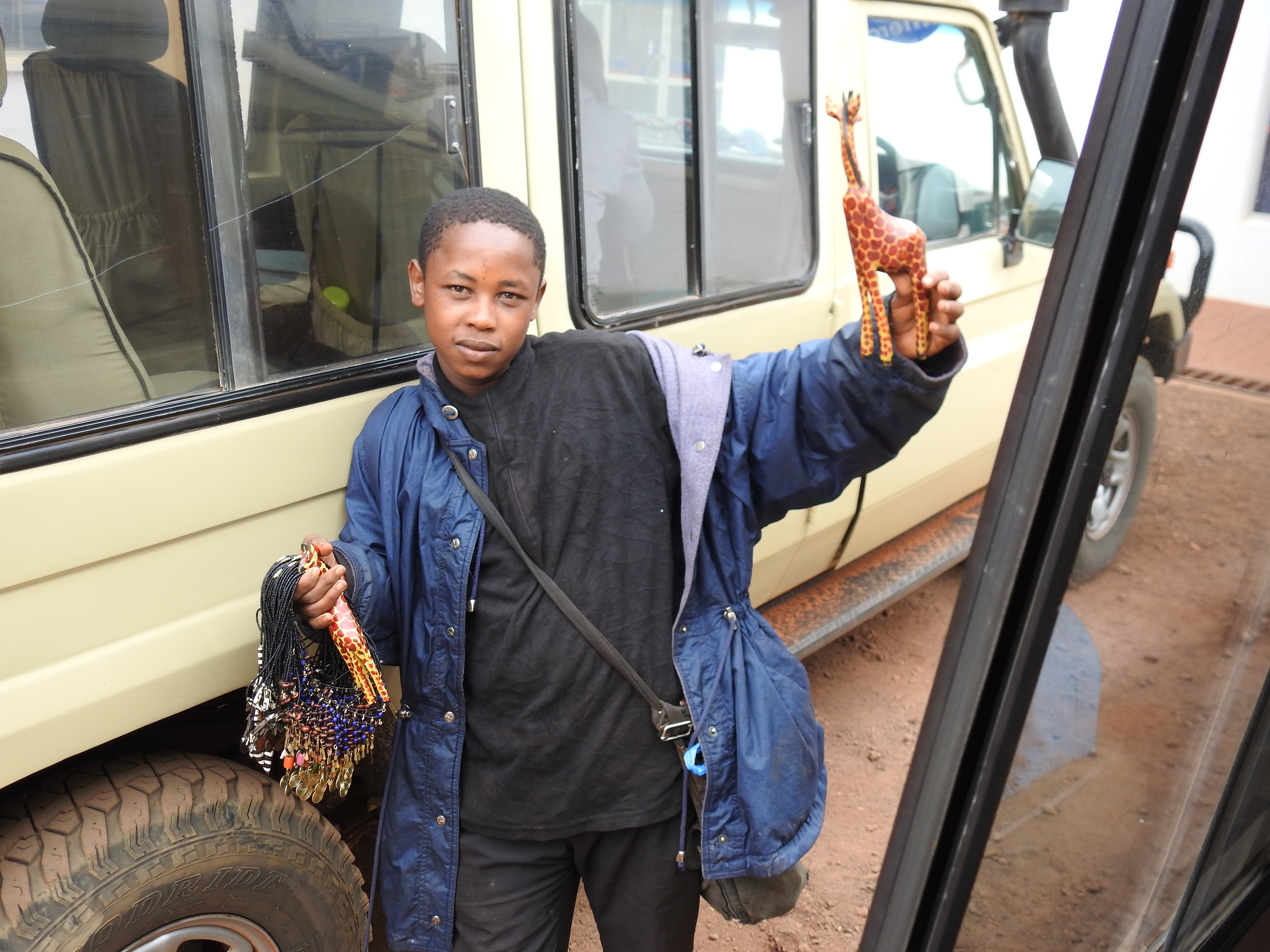 We were elated and greeted him like a long-lost friend. He quickly started to sell us more items until I showed him a screen shot of the blog with his picture on it.

This was something worth sharing with friends. He called over his buddies to look at the screen.

I honestly believe that no one vehicle has even been approached by that group of people without a single effort to sell a trinket.

While we were having our reunion with Onesmo, Susie noticed something behind him. I share the picture with you now, but I think it is nice that our president has business opportunities to pursue after he leaves office. 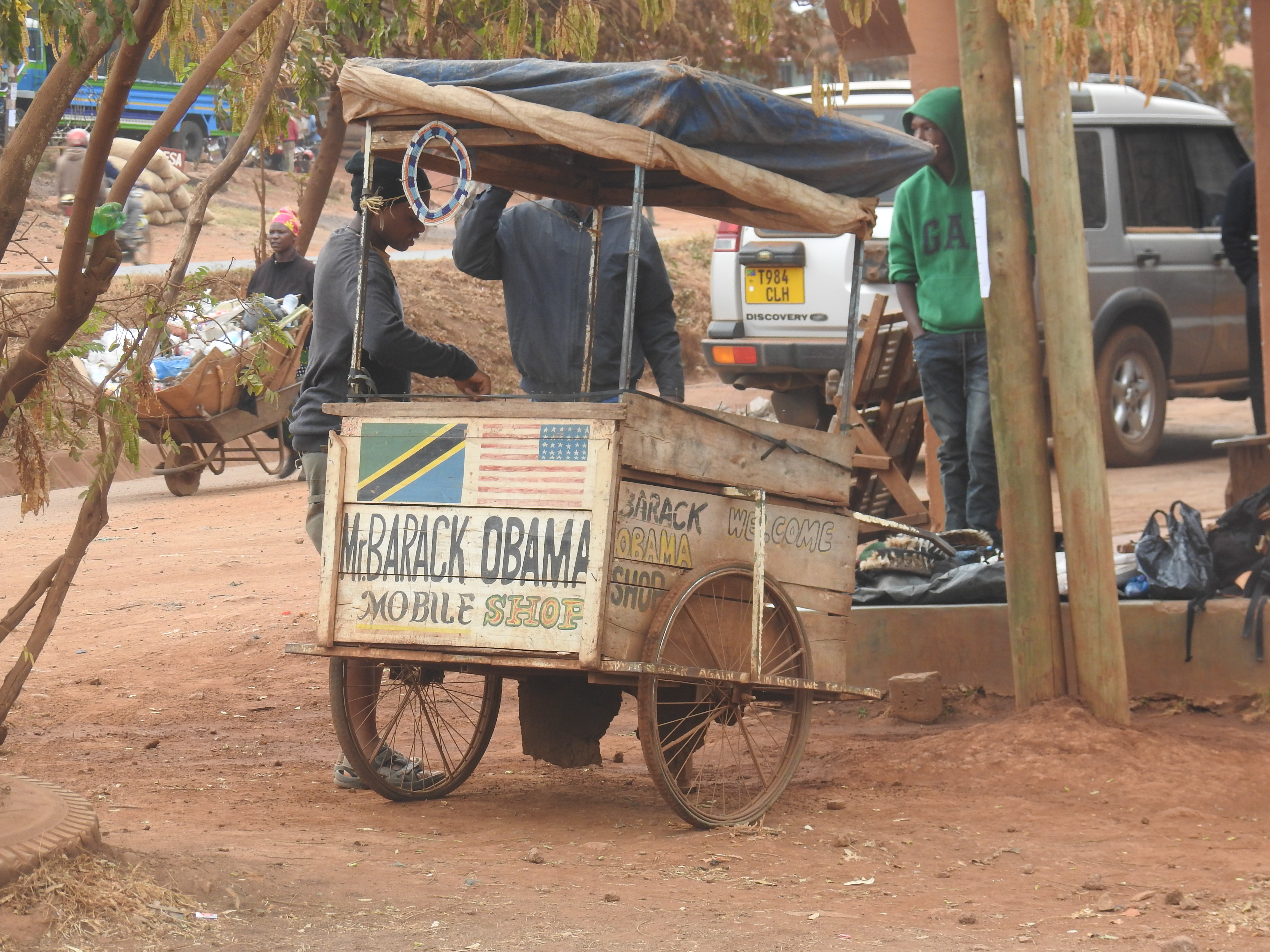 PS The sculpture that begins the blog reminded both Susie and me of the velvet paintings of dogs playing poker.  It seemed the perfect photo for this mish-mash of a blog.