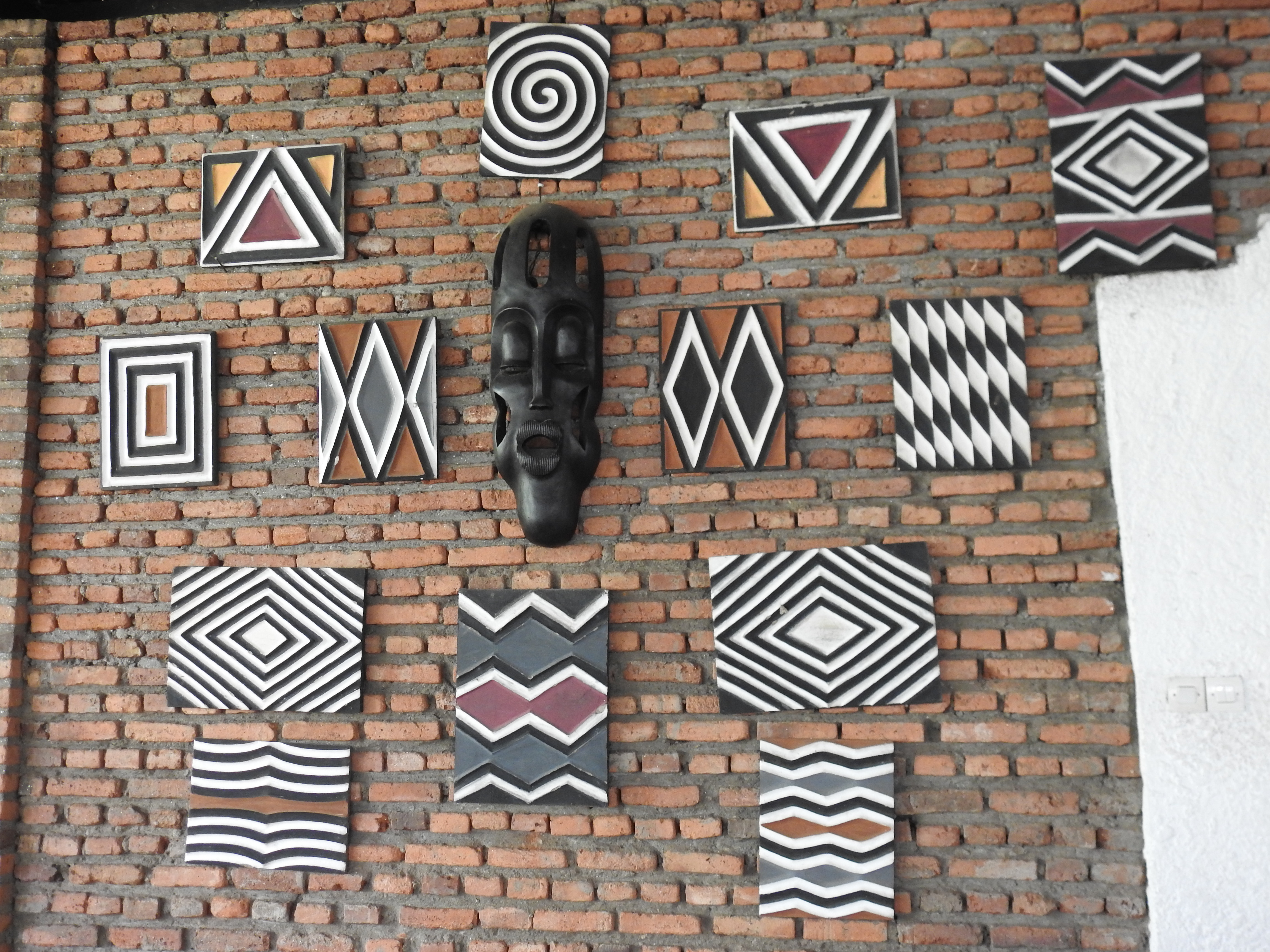 Earlier, I share a blog dedicated to short quotes of vignettes from Tanzania. Here is the Rwandan edition.

I have been generally pleased with the photos we have found, but there are a few that I have missed. On the second day we were here, a “city bus” (the small minivans that pack people in like sardine) was parked at the side of the road while several people worked frantically at its rear. As we got close enough, we realized they were cramming things into a very full trunk. It was then we saw the most unusual piece of luggage:

A rather distressed goat.

Yes, they were moving luggage to make enough room for this mid-size farm animal. A man was folding his legs underneath him to make him a small package. As we drove slowly by, they managed to close the door and were on their way.

Vehicular Transit: Its Not Just for Humans Anymore #2

I have shared some of the items that people transport with their bikes. We also saw two we did not expect. Here, we have a baby goat strapped on to the part of the bike that we used to transport our school books. 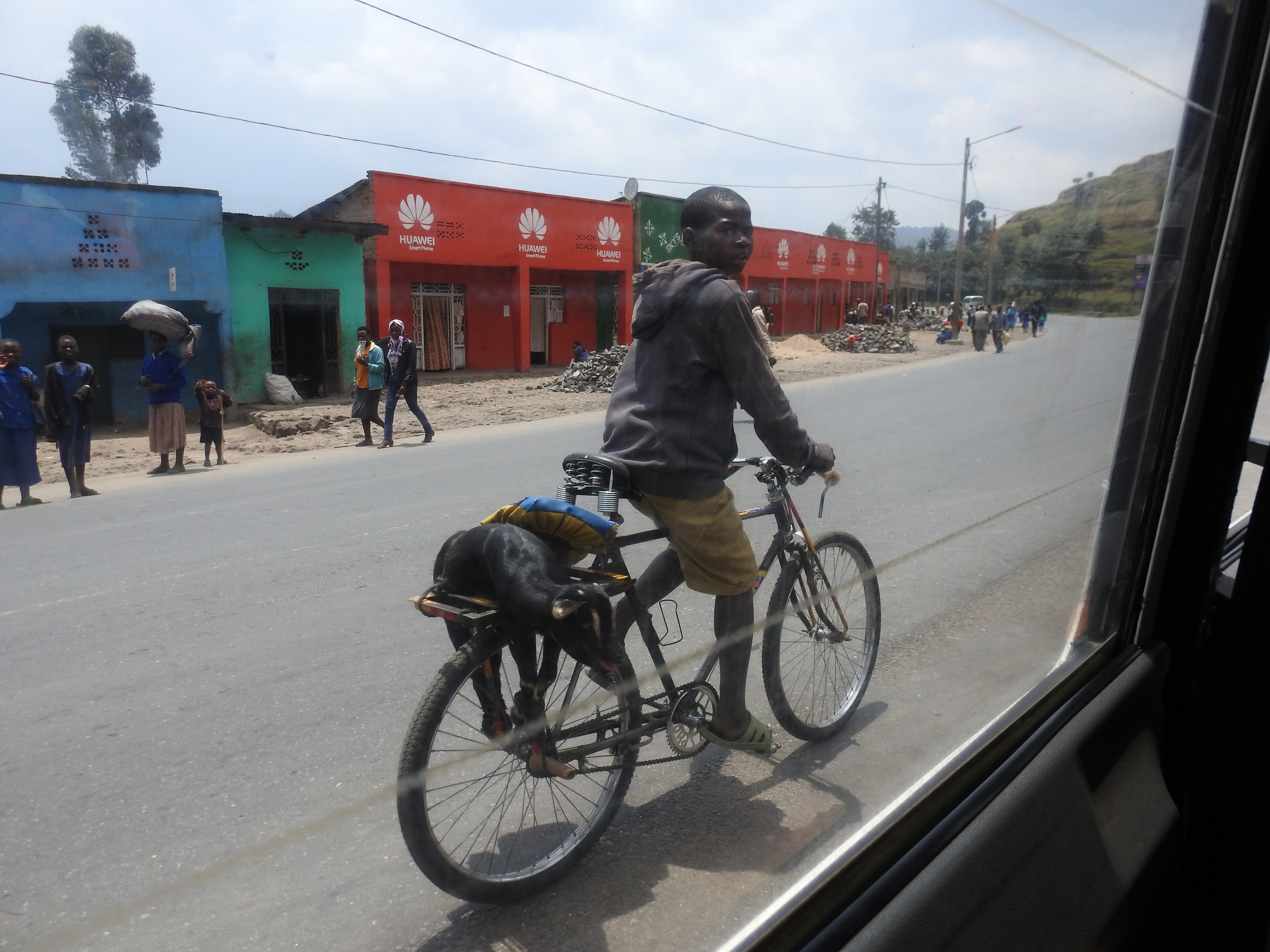 Soon after we took that photo our guide Didier pointed forward and said, “Pig”.

“Behind the sack of potatoes?”

It was then we realized that the sack was not a sack, it was a large pig. I captured a small fraction of this shot. I wish I had done better. 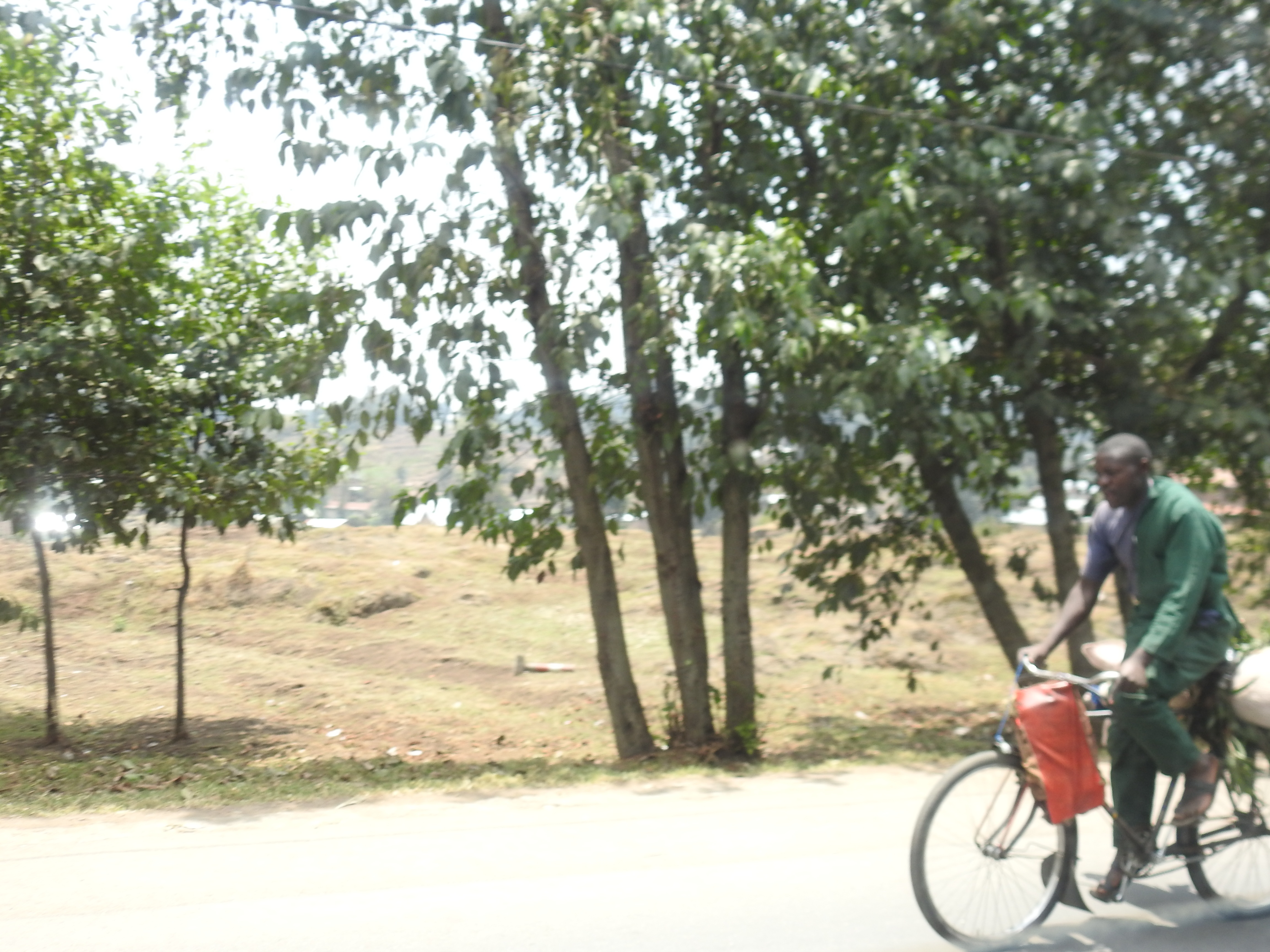 Another Photo I Wish I Got

OK, that was a pleasing alignment.

While fumbling with my lens cap, I noticed the coup de grace: the final woman was wearing a Texas A&M t-shirt.

[Insert your own Aggie joke here.]

When we arrived at the Lemigo Hotel in Kigali, we were very pleased with its modern conveniences, including TV with English shows.

Wiley noticed the show on a TV in the ornate lobby.

Both Susie and I are mild introverts. Both of us are reluctant to impose ourselves on strangers, particularly people who do not speak our language.

So how do we account for Liam? He will haggle with anyone, an activity I find awkward if not downright uncomfortable. He frequently walks up to random people to chat (remember the locals grilling at the Water Hole that he played pool with). 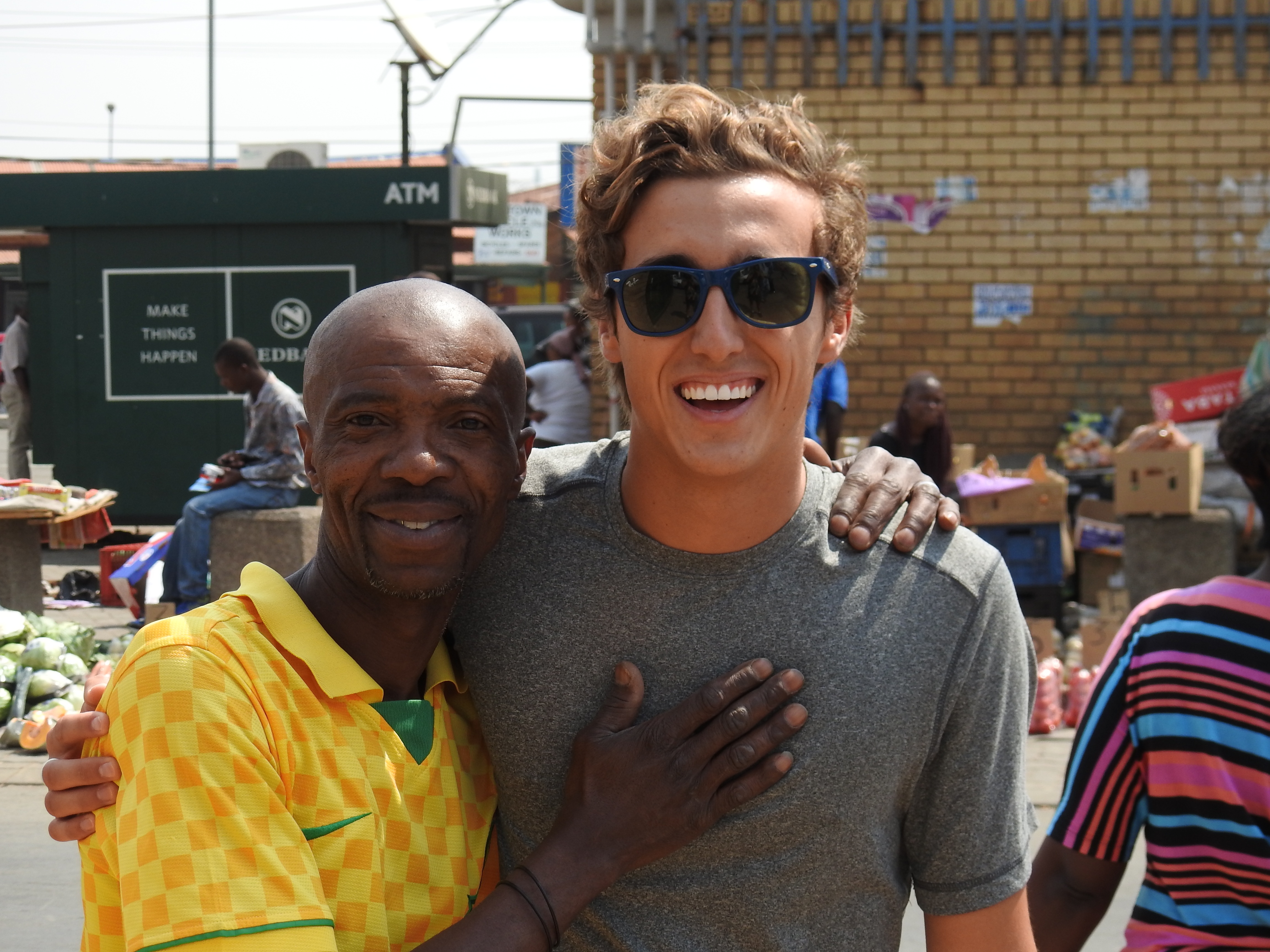 Last night, we were at a hotel on the shores of a huge lake. Next to our hotel was a group playing beach volleyball. Liam happily struck up a conversation with them and for a moment was tempted to enter the volleyball game, until he saw how well they played

Perhaps we cannot explain how he got this way, but we are happy that he has this skill. Even as I write this, he is buying kebobs from a Swahili-speaking street vendor.

We clearly got the wrong baby at the hospital.

We have bought several items, but few will match our Rwandan shirts.

At camp, I have a reputation for wearing loud shirts. When we arrived at the Lake Kevu Serena Hotel, both Susie and I noted the excellent shirts that the staff wore.

When we had a minor miscommunication regarding payments with our hotel, our guide felt terribly guilty about the mistake. He offered to buy us a drink. Of course, we refused.

He then asked what he could do for us.

The next day we went to a local market and entered a tailors shop. The shop was less than 100 square feet, making it a tight fit for the sewing machine, four employees and three of us. Bolts of colorful cloth lined the walls. The Rwandans have a wonderful sense of style, featuring bright colors and bold patterns.

We picked some fabric and they custom-sewed us 4 shirts and 2 skirts.

That night, I chatted with the manager of the hotel. He asked about our day’s activities I reported on our day, including the trip to the tailor. I also said that no shirt really compared to their staff uniforms.

The next day, he presented me with a perfectly fitting shirt using the company fabric. He told us that had asked their in-house seamstress to make one for me as a gift.   It ranks of one of my favorite all time gifts. But I became slightly suspicious that it had recently been made when I noticed that the name “Phir” had been sewn on to the inside collar. I hope poor Phir isn’t shirtless right now.

Here are three of the shirts and Susie’s wrap. 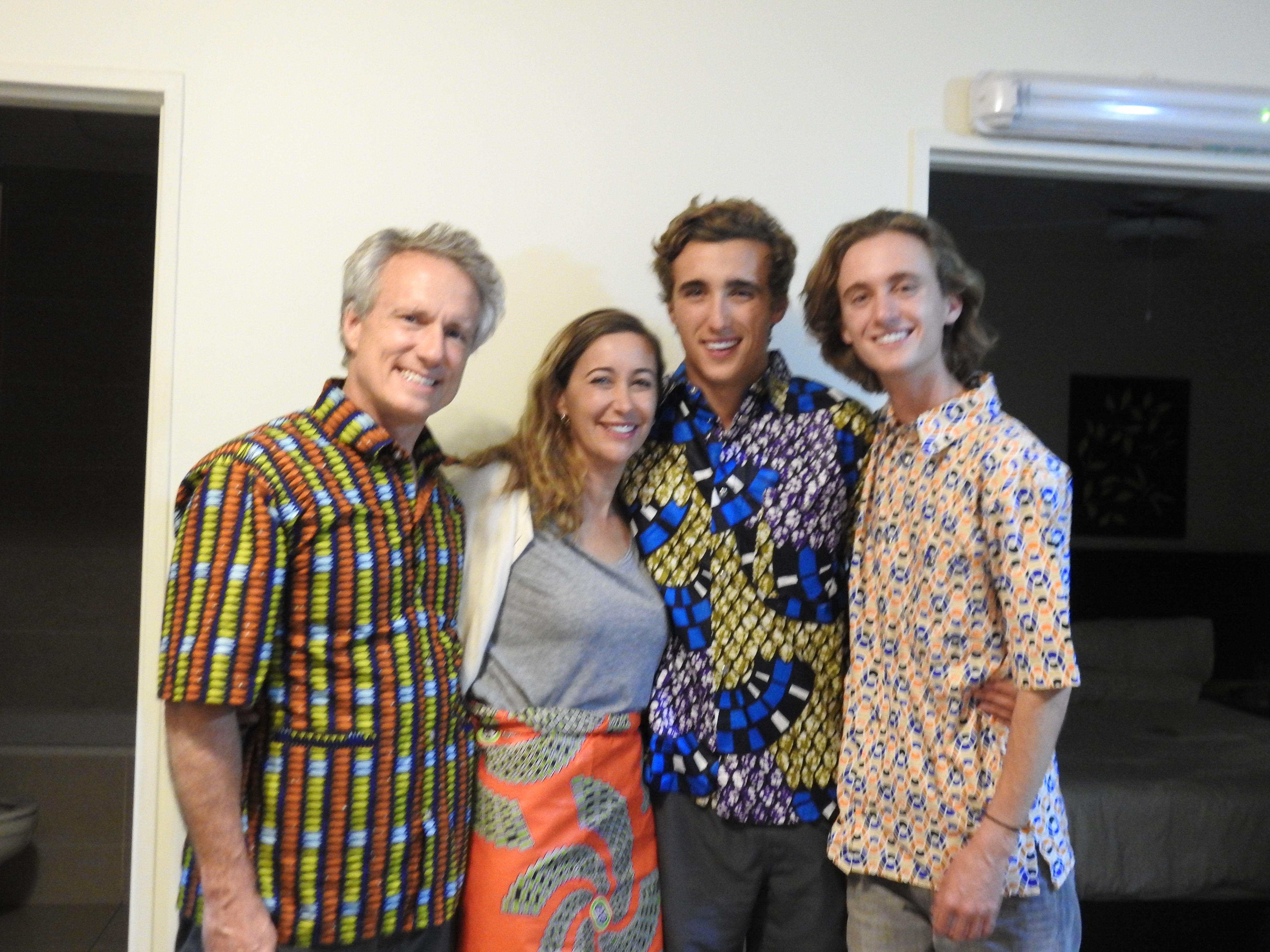 We often order boxed lunches for the days we will be on safari or traveling long hours.

Wiley noticed that the quality of the meals was somewhat inconsistent, particularly when meat is involved. More than once, we would spot a mystery item in a place you might expect meat (between two pieces of bread, in a baked pastry) prompting team speculation.

“What do you think that is?”

“I am not sure I have ever seen it before.”

I suspect all of us have had some occasion where we cannot exactly identify a meat. Perhaps we confused quail with chicken or bison with beef.

Here, we experience a much more epic ambiguity. At times, we could not really tell if we were looking at poultry or mammal-based food.

That, my friends, was disconcerting.

Wiley decided to avoid this game of “Name that Meat” by ordering the vegetarian option. Spotting an opportunity for some fun, he declared he was going vegan.

That night, we had a wonderful dinner at our lodge with lamb masala.

He smiled and proudly declared, “Do not judge me. I’m vegan fluid.”

We had an extra day in our agenda, so our company arranged time at Lake Kivu, a resort spot in Eastern Rwanda. The lake is vast with the other side (Congo) being too far to see.

Let me try again. To my mind, even an elementary school student longing for a non-class field trip would rather work on her school work than check out coffee factory number two.

Yet we were to visit our third such facility despite the fact that I think I am now sufficiently knowledgeable about the coffee production process that I could get an upper management job with Starbucks. 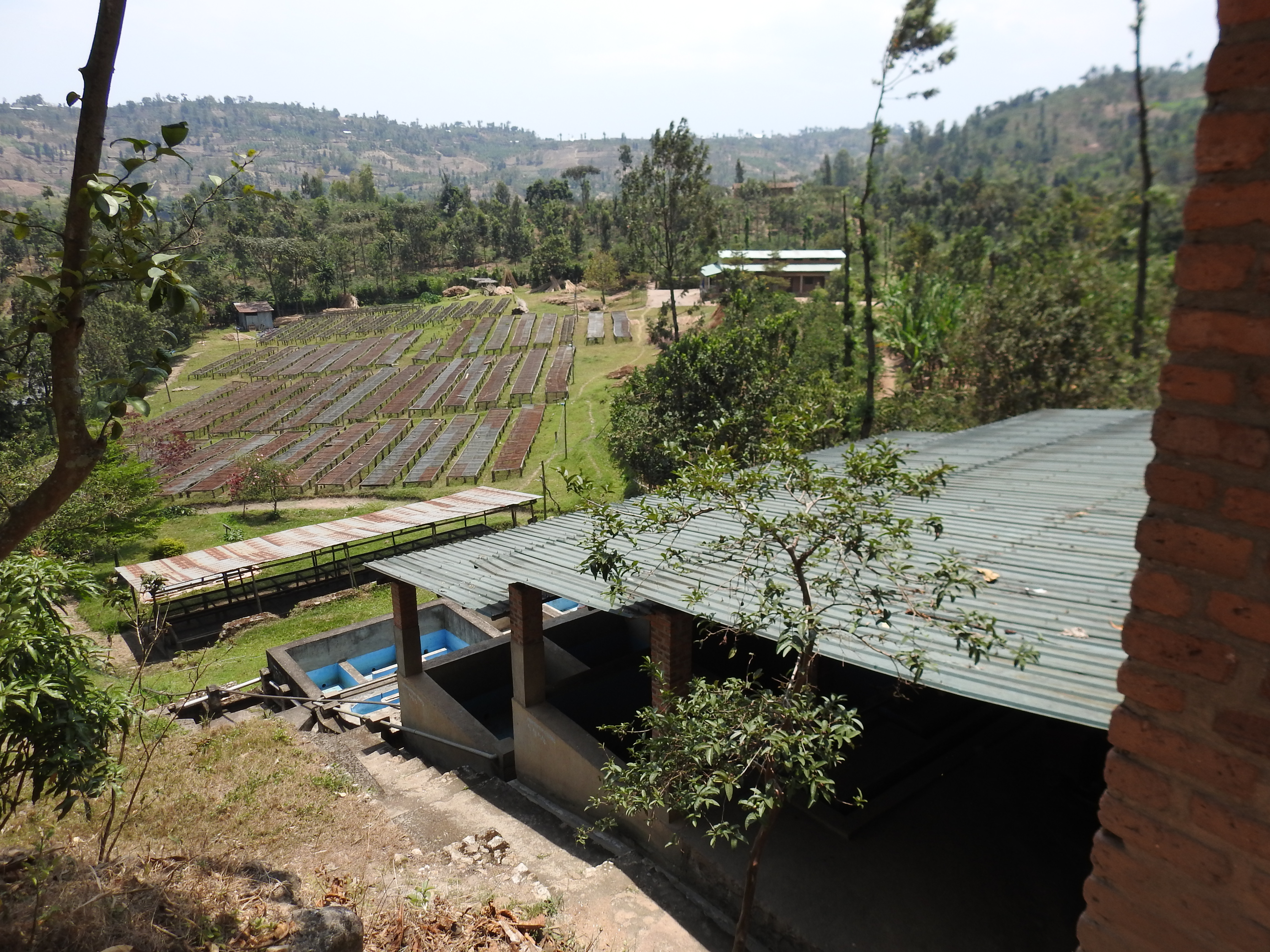 I was questioning the destination. I should have been concerned about the conveyance.

The boat was 20 feet long and only 4 feet wide with an old outboard engine in the stern. The driver left the engine running as he helped us climb in. While we were tying on our life jackets, the engine sputtered and died.

After attempting to pull the cord 20-25 times, he called for help. Four people, two jaunts into an unseen, but nearby location and some ingenuity, it was running again.

Here is my question for you: for how long would you want to trust a narrow boat with a dicey engine? Before you answer, please know that the lake is over 200 feet deep, even just 100 feet from shore. 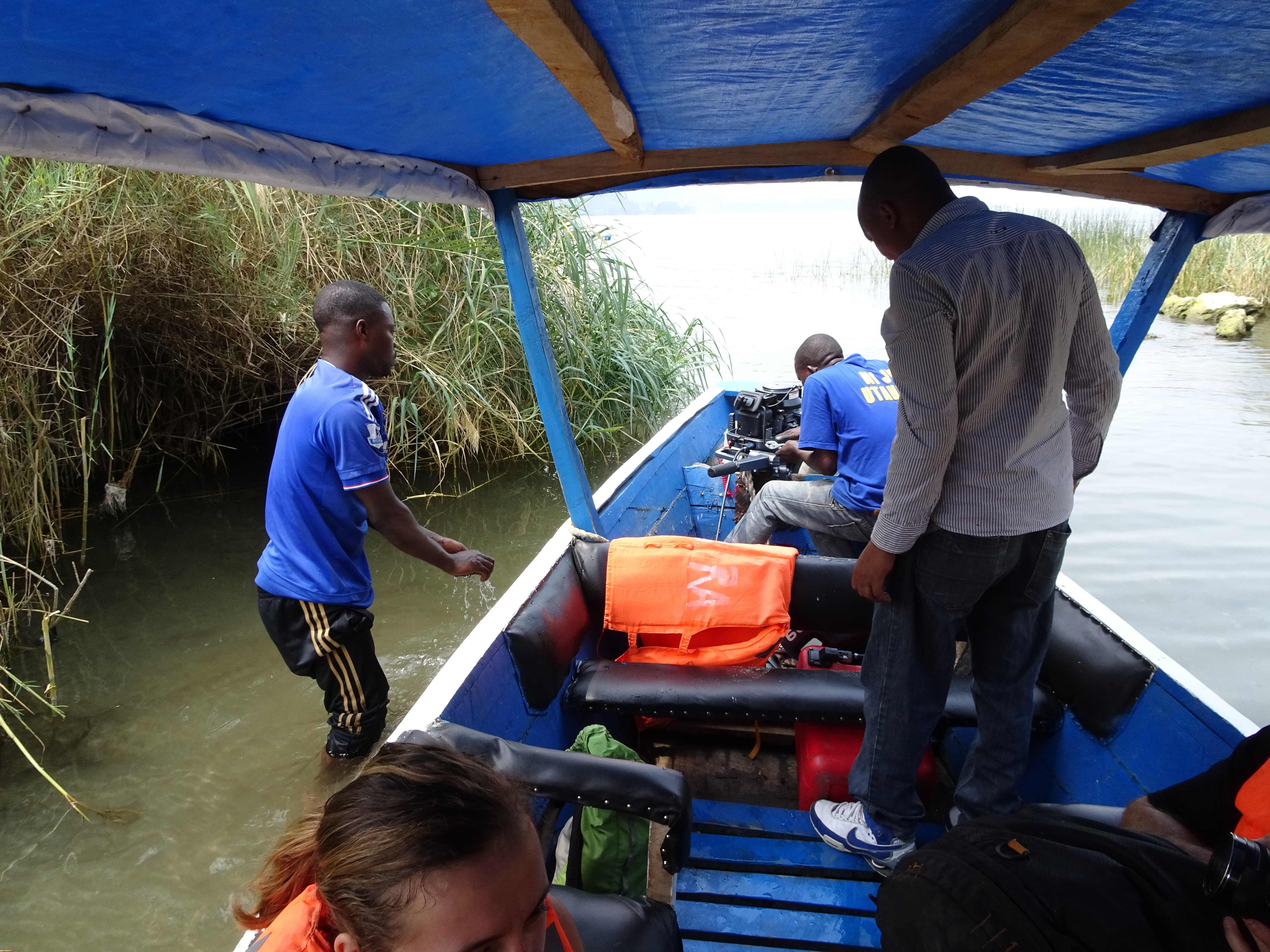 If you answered “two 45 minutes rides through rough water”, you would be our winner!

The Circle of Life

We went on a walking tour around Lake Kivu and saw an interesting site: a group of 20-25 small boats sitting idly in a bay. Offshore was the largest of Rwanda’s breweries.

Didier explained that the brewery dumps their mash (used grains) into the lake. Here is an unexpected fact: fish dig mash. 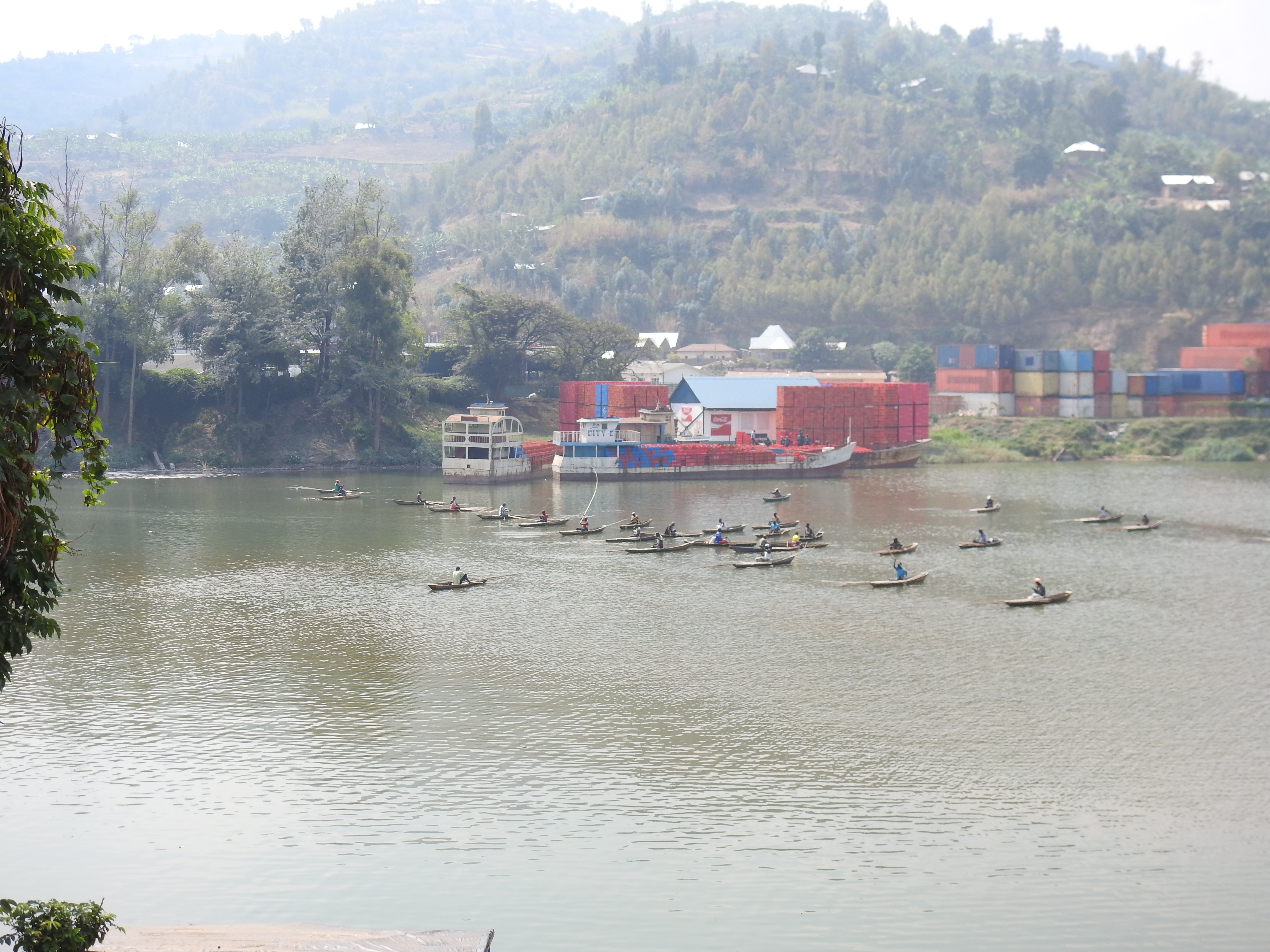 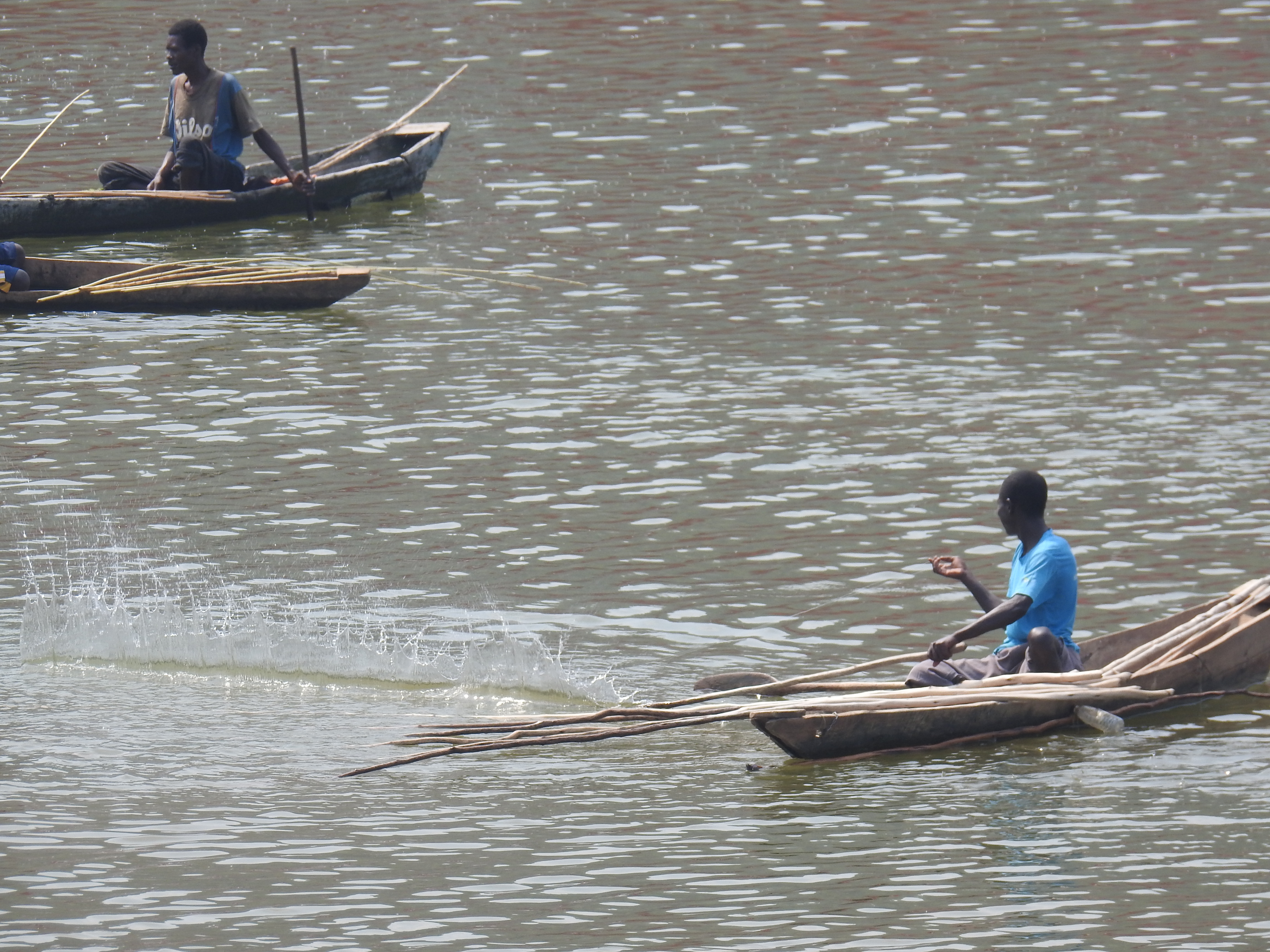 When we arrived in South Africa, we decided to do some laundry. South Africa is a first world country, so we are enjoying paved streets rather than dirt roads. We see all makes of cars and trucks rather than just Toyota Land Cruisers. Electricity is consistent. [Note: as I look back on Tanzania and Rwanda, I realize that there are so many details that I simply did not have the chance to share. One detail is the fact that electricity interruption happened everywhere we went. Sometimes we would be down for seconds, others for hours. The interruptions were initially disorienting, but quickly became normalized. Our biggest adjustment has to actively manage charges of our electronic equipment: cameras, computers, phones (used for calculators, compasses, and other non-data apps – we remain off-the-grid), etc.]

But consistent electricity does not mean we are in the lap of luxury.

A “load of laundry” is really a “bathtub of laundry”. This is that load after 2 rinses. 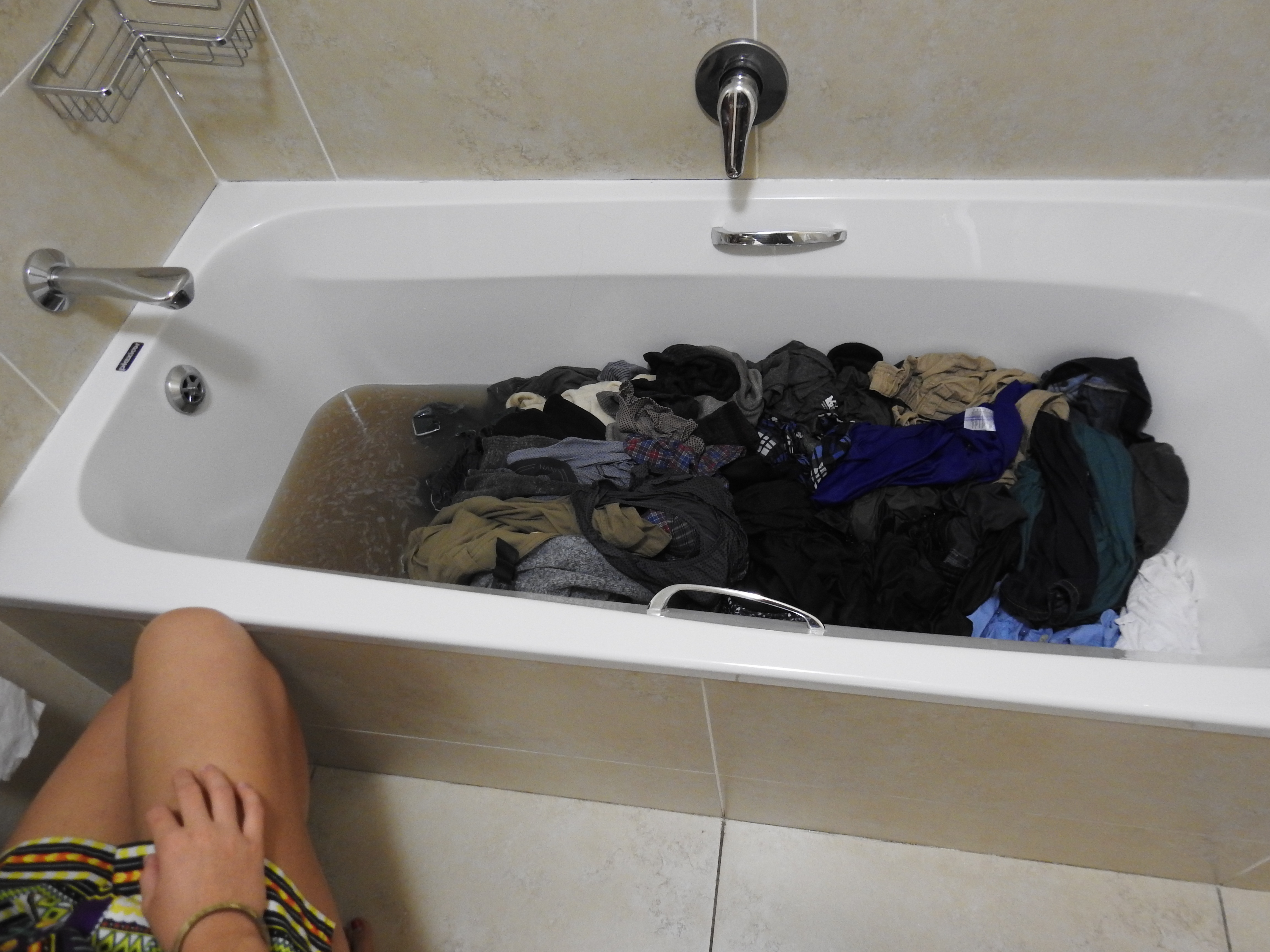 First, this is the pace to get a divine exchange rate. 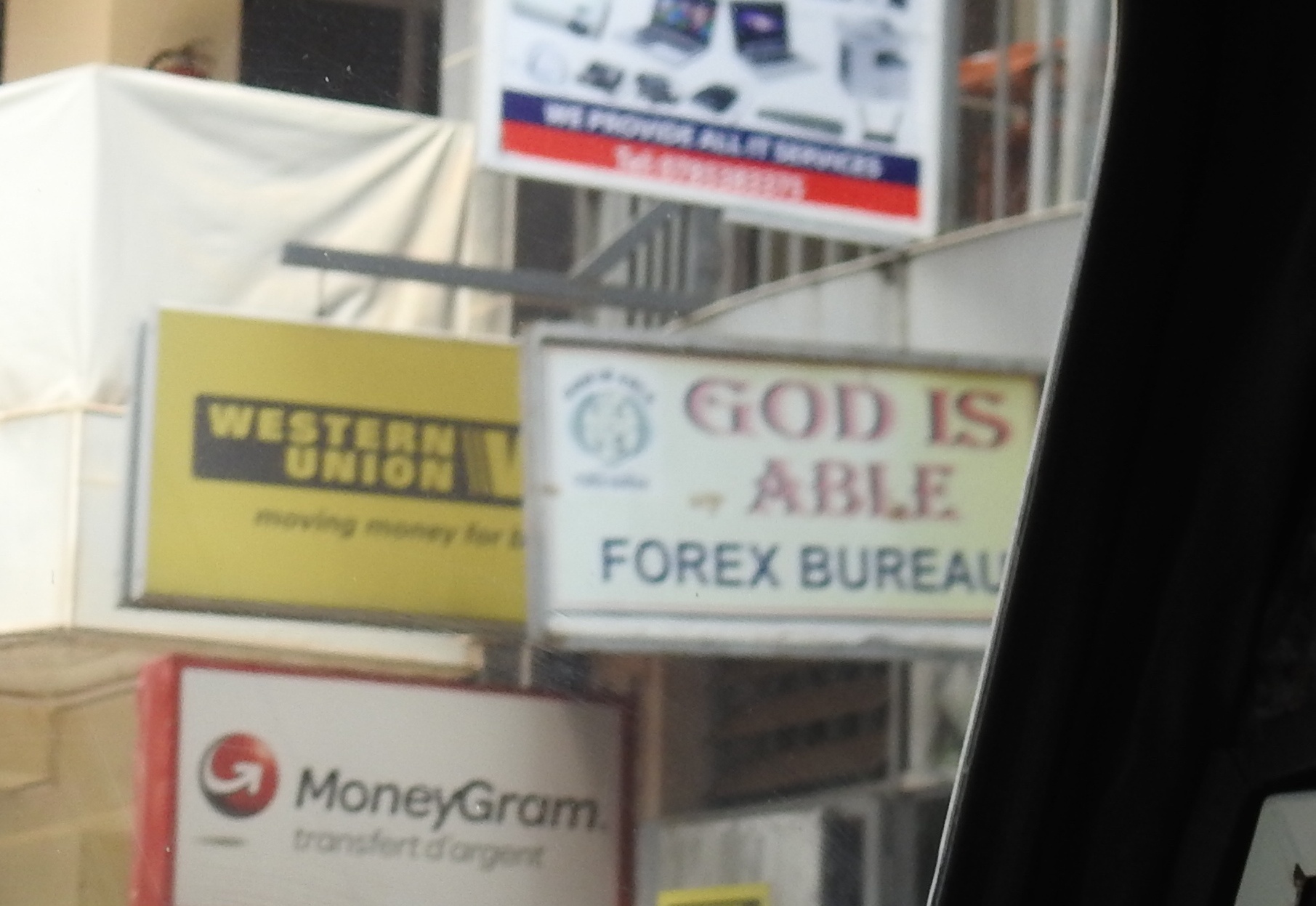 Second, does this mean that Camp Champions is diversifying? 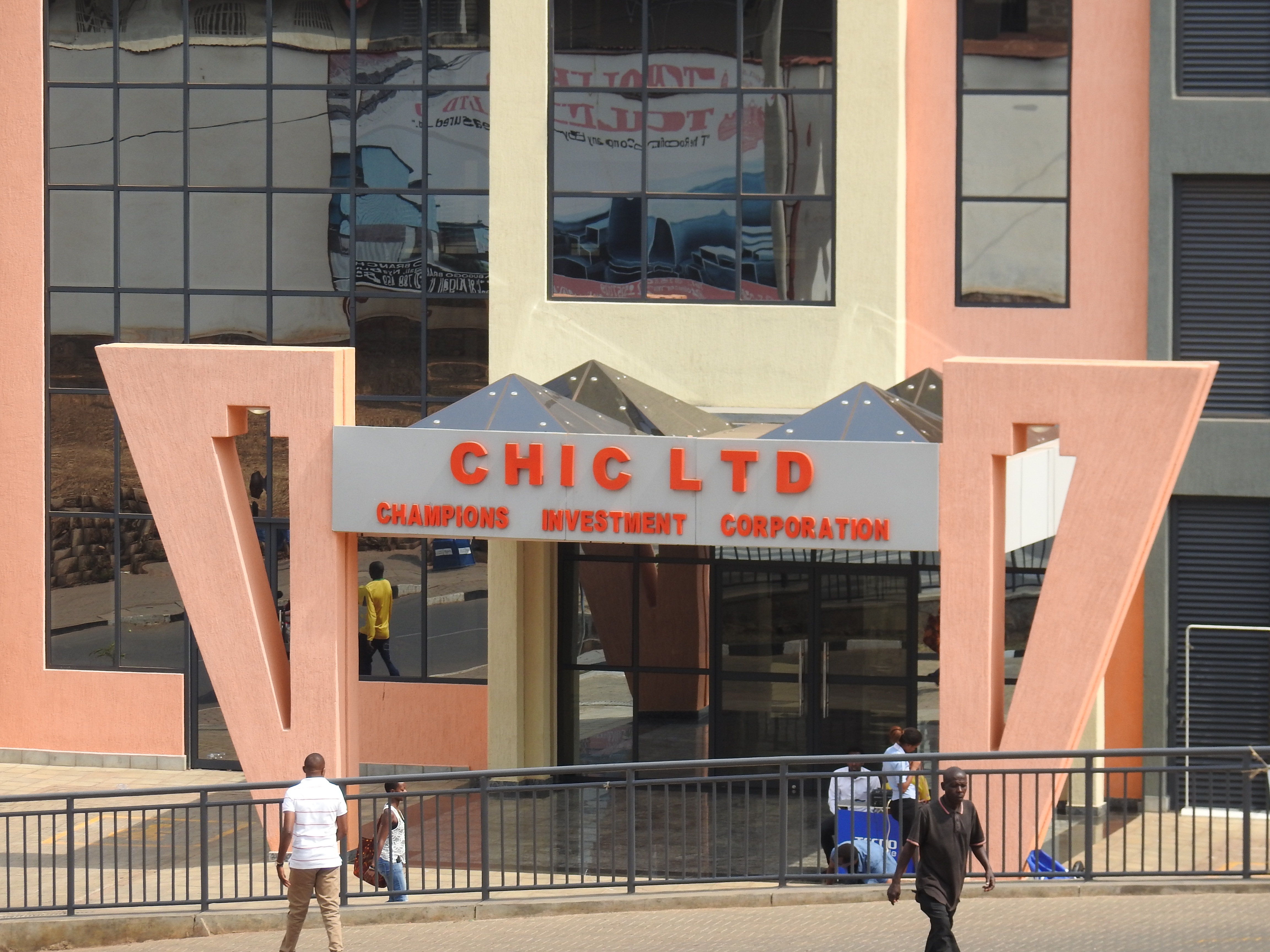 Third, I feel certain that there is a deep meaning to this fallen Minnie Mouse. Is this a commentary on consumerism or the contrast between the first and third world? I think you should make your own caption. 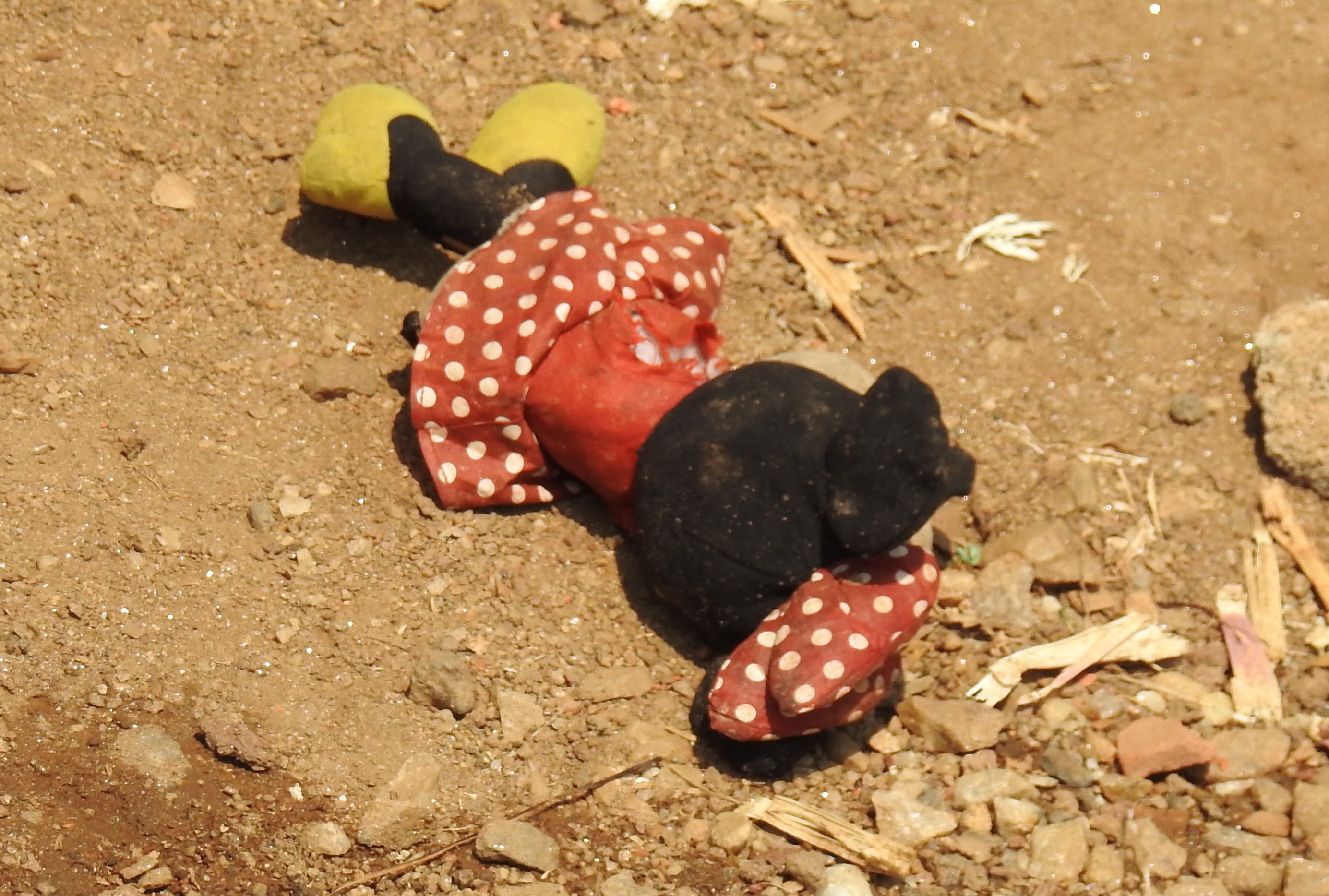