Johannesburg: Better Than We Expected 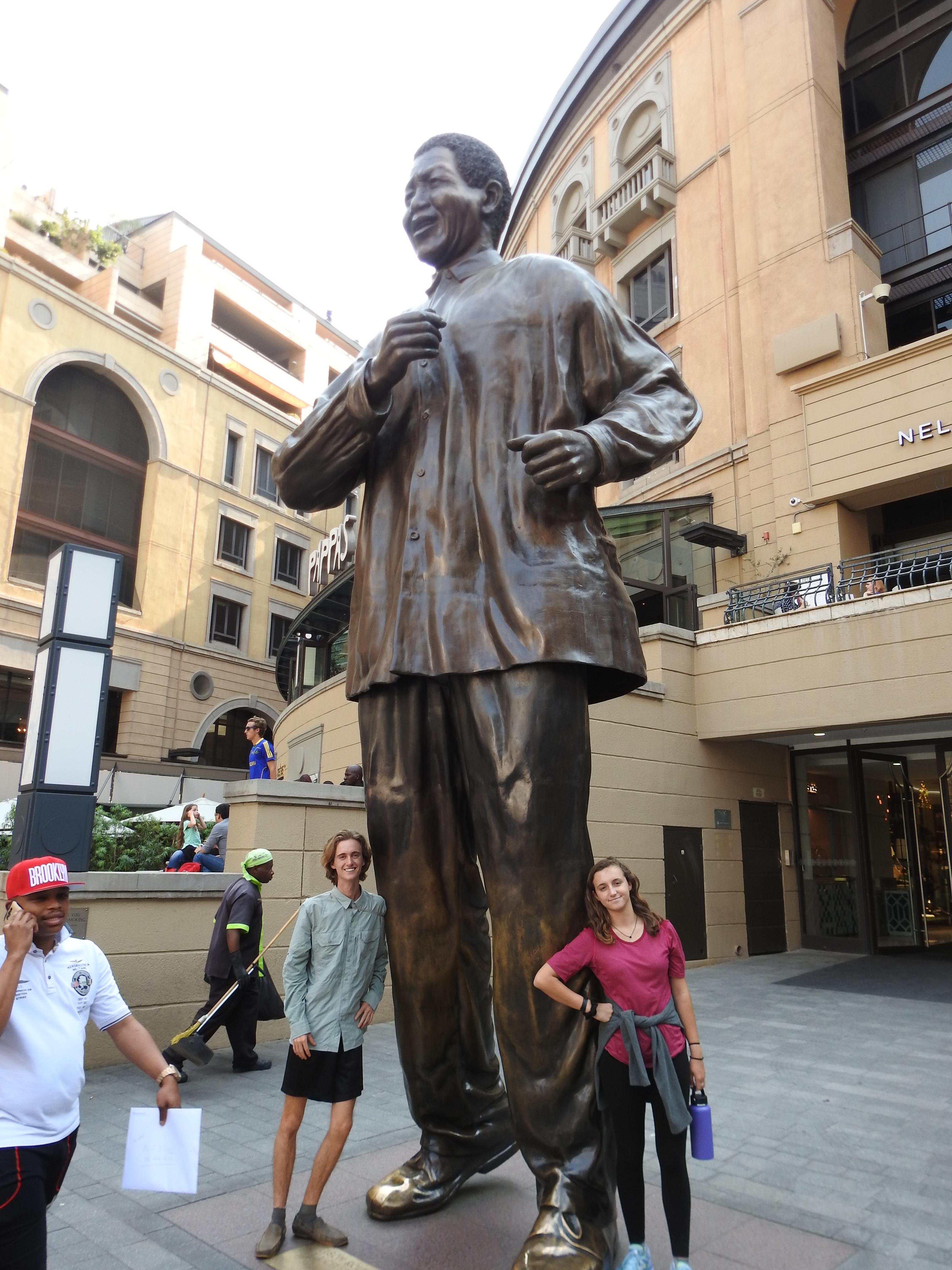 Our expectations for Johannesburg were low. Everyone we talked to about South Africa had one of three comments when we said we were “going to Johannesburg and Cape Town”:

In short, we were not afire to spend 4 nights and 3 days in “Joburg”. [Note: “Joburg” is what the locals called it. For reasons that I do not fully understand, this annoyed some of the kids, especially when Susie or I would use the epithet ourselves. I think they felt talking like a local was an affectation. That is unfair. They also think that my effort to pronounce “Tanzania” like a local (Tun ZAN ee-uh) rather than an American (Tan zuh NEE-ah) is an affectation. Which, of course, it is. We all enjoy our petty annoyances occasionally.]

But we enjoyed our time in Joburg largely as the result of the international currency markets, a serendipitous discovery and a lovely human.

The dollar has increased substantially against the South African Rand, having appreciated 80% in the past several years. As a result, restaurants that would typically be completely out of the question on our journey were suddenly made available to us. Eating at good restaurants proved to be much more pleasurable than I would have guessed, but clearly three weeks of safari cuisine and local dining had made us all appreciate more familiar food. A meal that we might expect to cost $40-$50 per person were costing only $15-$20 each. Our budget cannot allow for this daily expense, but we enjoyed two indulgent meals.

Second, Terrill was perusing the “guide to Joburg” pamphlet that was at our hotel. I have seen dozens if not hundreds of these mini-magazines in the past I have never found them useful. Typically, they describe a fantastic event that just ended or one that will start 2 days after I leave. But Terrill’s optimism remains strong, so she dove in and found the annual Joburg Art Festival. 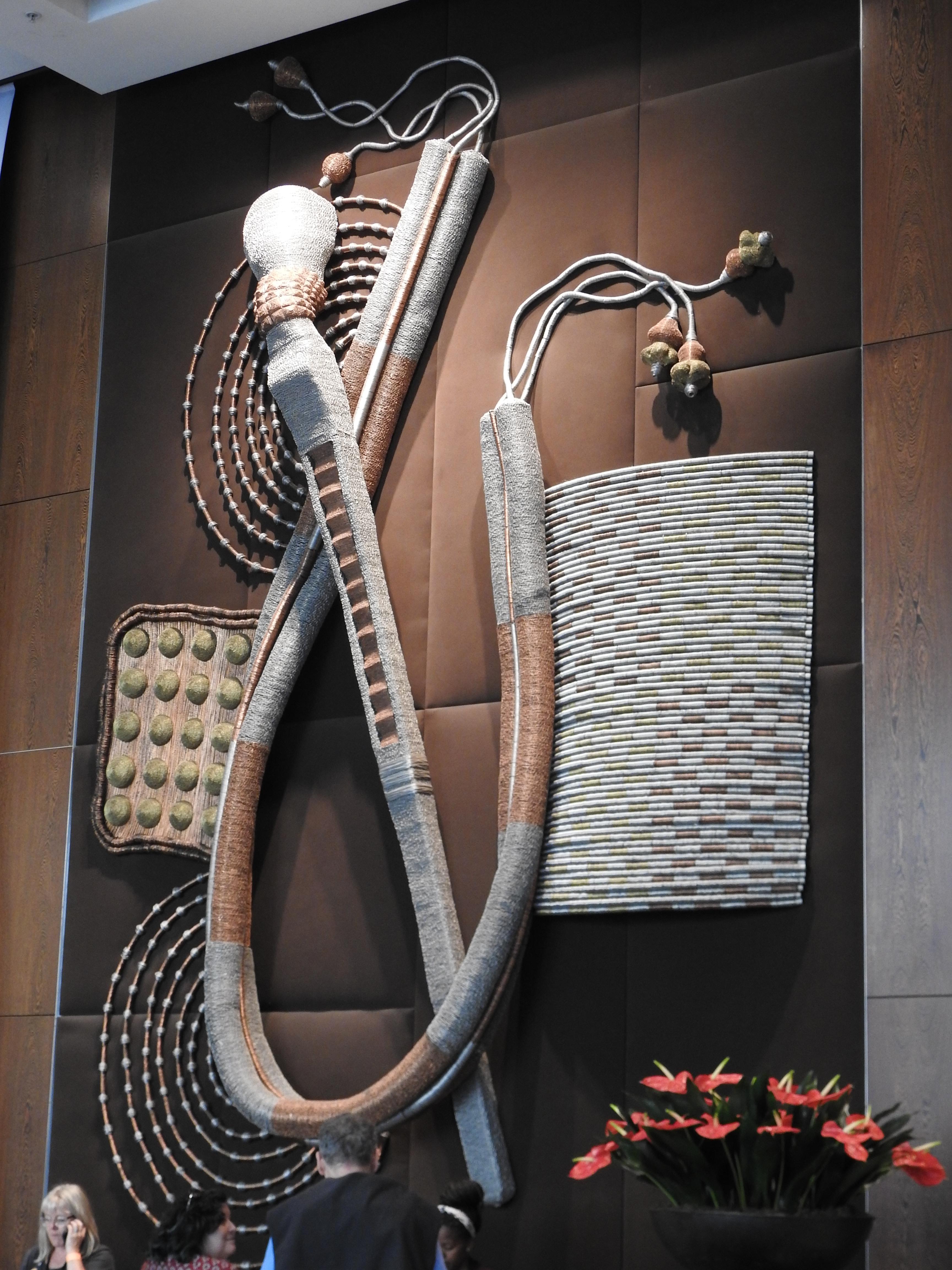 We had a free half-day following the Apartheid Museum, so we took it in.   The festival was a hit, though for several different reasons. On one level, there were some truly engaging pieces. Don’t get me wrong, there was some inane drivel, but we also saw some sublime work. Second, the people-watching was exceptionally entertaining. While many people were there to be inspired and/or moved (like us), there was a subset of humans that amused us: the professional Gallery Gang. If I had called central casting at a movie studio and asked for pretentious art patrons, they could not have outdone this group of wine-swirling bohemians as they pontificated on the subconscious meta-message of the various pieces.

Actually, it reminded me of a story from Herb Jackson, an incredibly celebrated artist/professor at Davidson College (my alma mater and Wiley’s future haunt). Herb’s work is completely abstract, using thick layers of oil paint that he would then peel back or augment. His work is gorgeous, but it is what it is. He does not strive for hidden meaning, just beauty. In 1985, a gallery in New York featured his work. The exhibition attracted a rave review from the New York Times. The reviewer was particularly enamored with a giant canvas (12ft x 10ft) entitled “Wild Horses” (as a reminder, this is an absolutely abstract work):

“The viewer cannot help but feel the equine power of the horses. As I gazed at the center of the canvas and Mr Jackson’s exquisite use of whites and yellows, I could almost smell and hear the breath firing from the flared nostrils of these mighty beasts.”

Herb read this review to his class and smiled. “OK, it is great to get a review like that from the Times, so I never told them the truth. The fact of the matter is that I spent a long time on that huge piece. After completing it, I was sharing some wine with my wife as we struggled to name it. We were listening to a tape of the Rolling Stones when we heard Mick Jagger start to sing “Wild Horses”. We love that song, so we named the piece after the song. It had more to do with Mick and Mondavi than any actual horses.”

That story always resurfaces as I listened to the most self-serious of the Gallery Gang explain to each other the “truth” that the rest of us cannot see.

The festival also had performance art. OK, it is confession time. I really struggle with performance art. In theory, it sounds exciting and daring – always different, shaped by the space and the audience, sharing truths through a bold, previously unimagined lens. Yes, it sounds great in theory. But so does communism. But in the reality that we actually live in, performance art fails to deliver.

The theme of this particular performance was about the need of woman to support each other (to be clear, this is a message I wholeheartedly endorse). Each woman in the performance struggled individually, but was then freed by the combined efforts of other women. Instead of providing me with new insight, I felt that I was being beaten over the head in slow-motion. For those of you who might have missed it, I will summarize a portion for you. 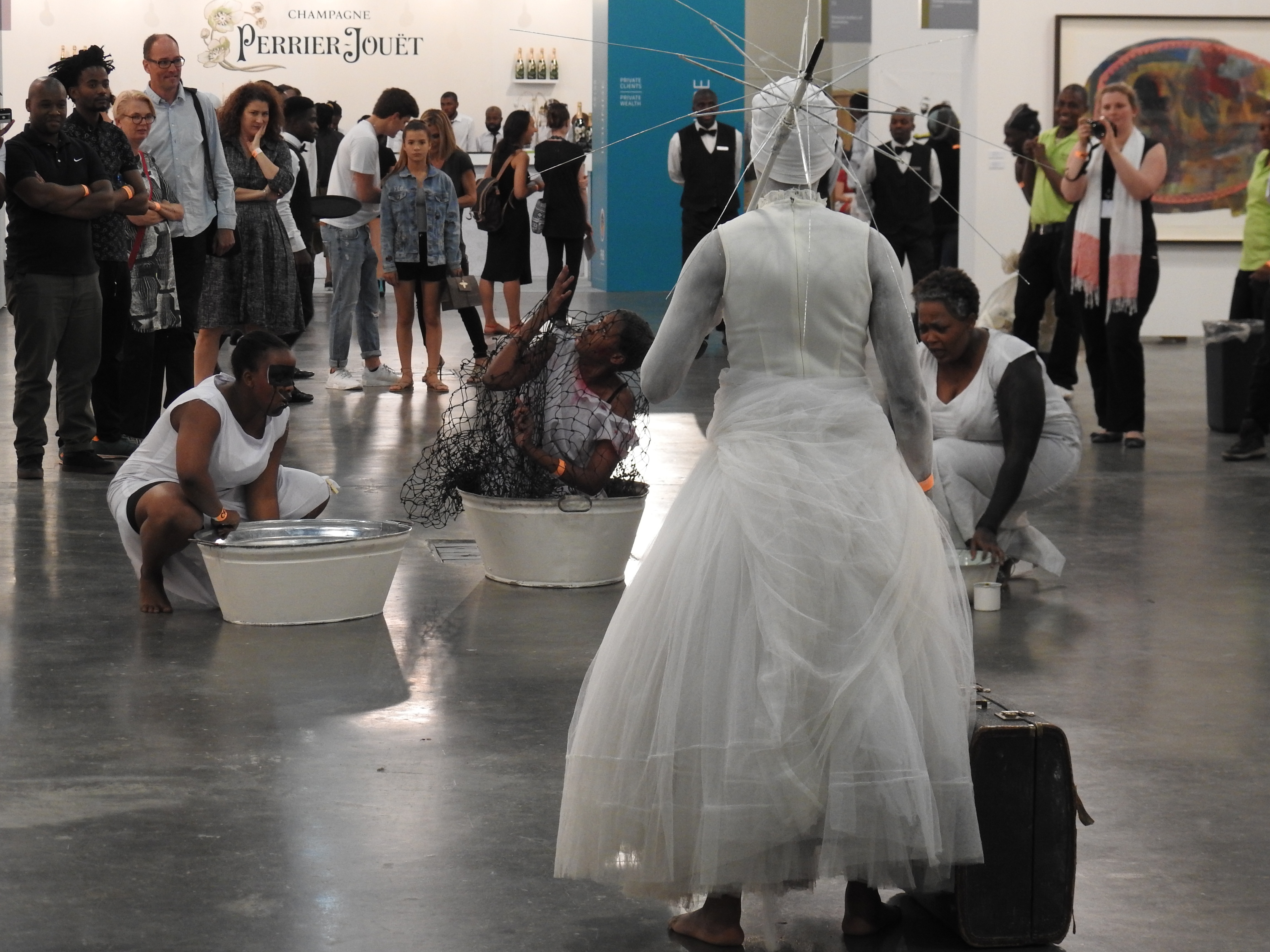 A woman in a large wash basin is stuck in a fishing net. I’m not sure how she got in either the basin or the net, but she sure is struggling. An additional 3-4 minutes of observation confirms the message we got within 3 second: net = struggling = sorrow. At a pace resembling a glacier, the other women slowly approached while chanting and singing. Basin woman is still struggling. Chanters keep getting closer. More struggling. The approaching women gesticulate in nonsensical ways as they creep EVER SO SLOWLY toward their trapped sister. I imagine the gesticulation translates to “do you think she will need to go to the bathroom before we actually get there to help her?”

For a brief moment, a truly evil thought took root in my mind. I could speed this whole process up by strolling over there and pulling the net off of her. OK, perhaps having a non-artistic American male liberating her from her bondage would send exactly the wrong message, but at least she would be free and the orbiting Gallery Gang with their iPhones would have some video that they were not expecting.

Alas, I fought the evil temptation and her sisters eventually freed her (though, I fear, only after she had aged substantially and was now eligible for senior citizen pricing at the movies.).

We walked around the exhibition for another 15-20 minutes after the liberation and met outside to make dinner plans. While in the lobby, the artists (still DEEPLY in character) came walking and singing through the foray. With Team Baskin their only audience, they proceeded into the Woman’s bathroom, 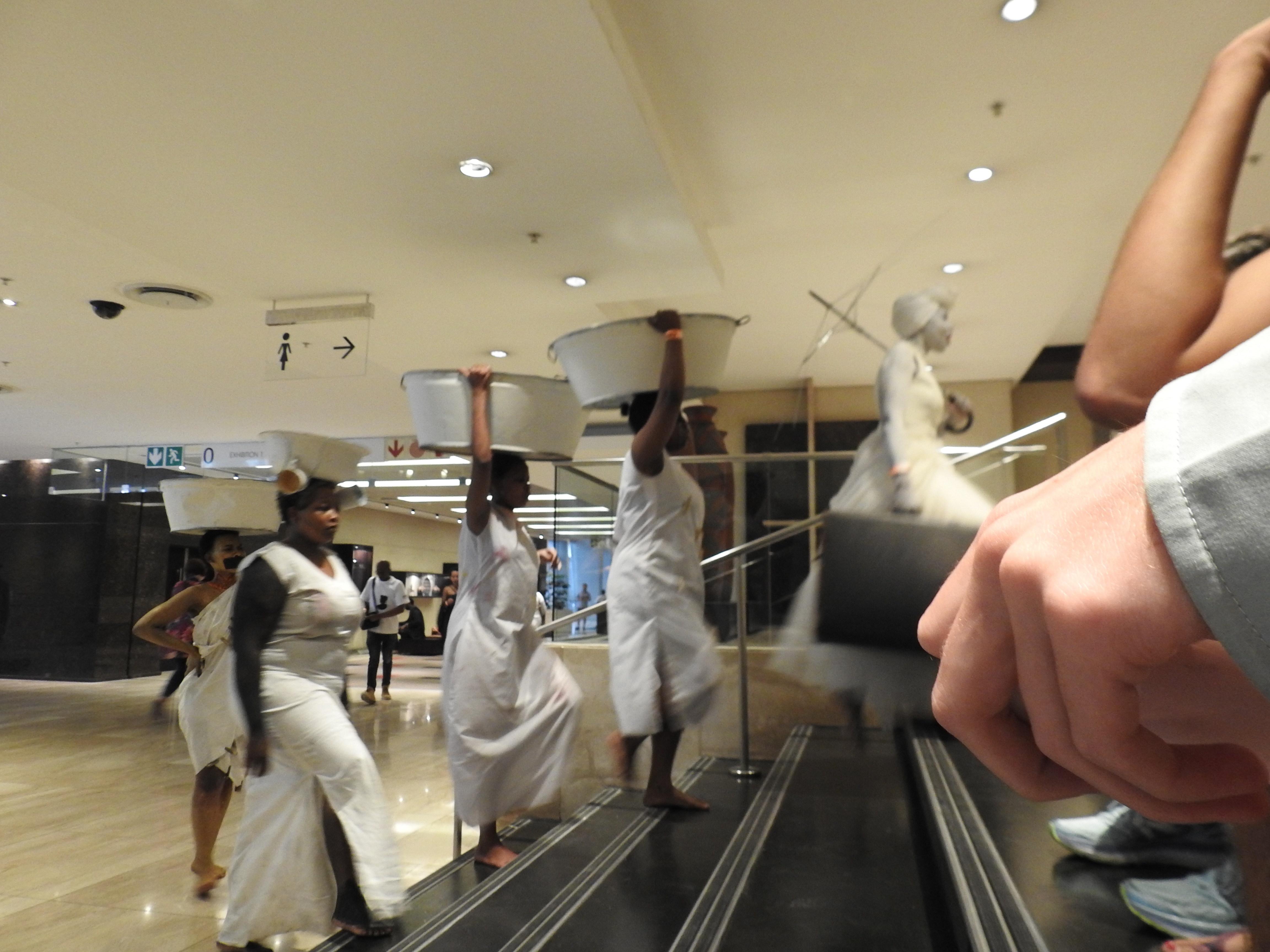 followed by a professional photographer. Seeing an opportunity, Virginia grabbed our camera and took this shot. Susie (who was inside using the facilities) felt unexpectedly serenaded. Certainly, I have never sang to her while she peed. 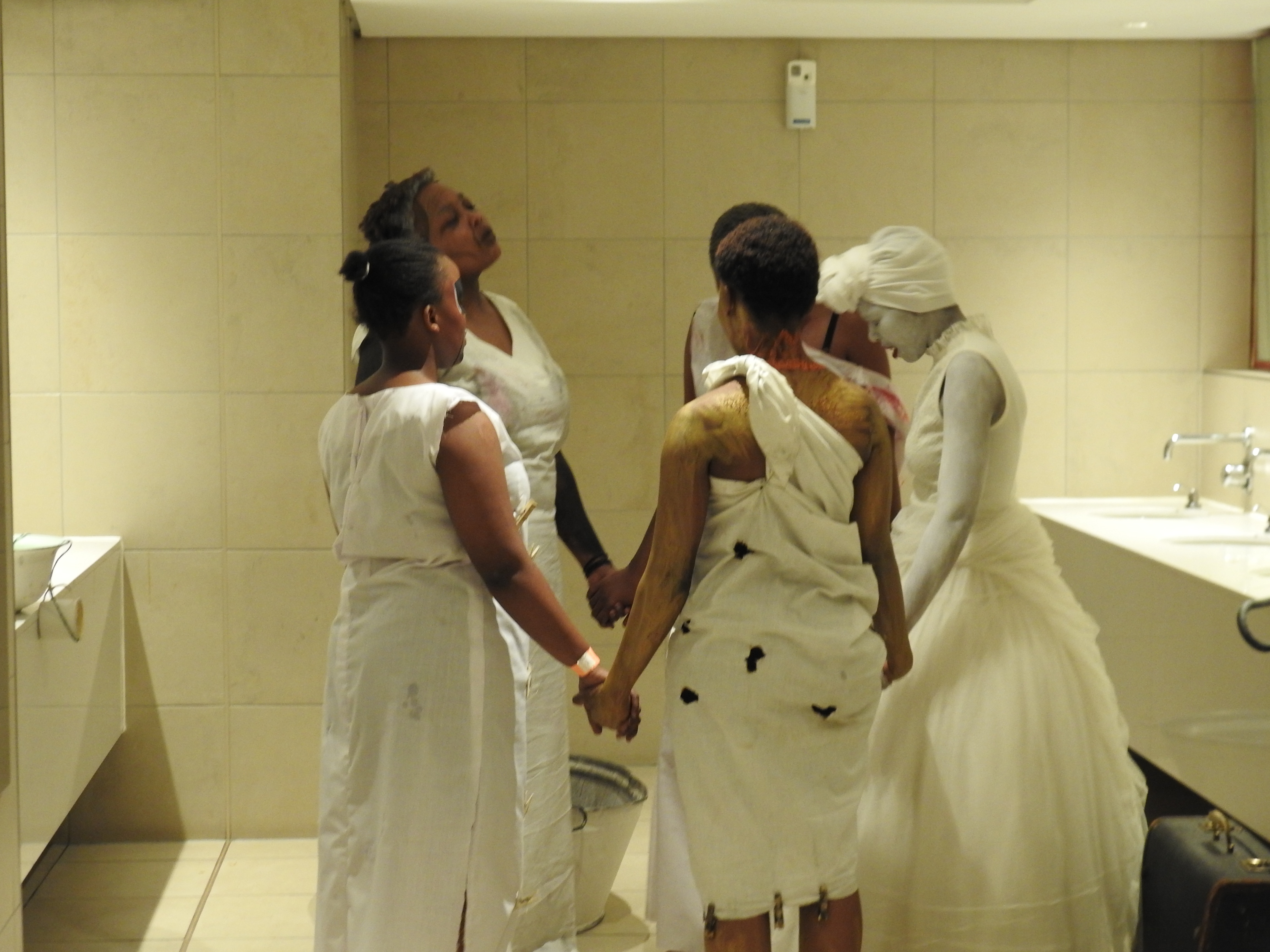 The final gift that made Joburg so pleasing was KB. 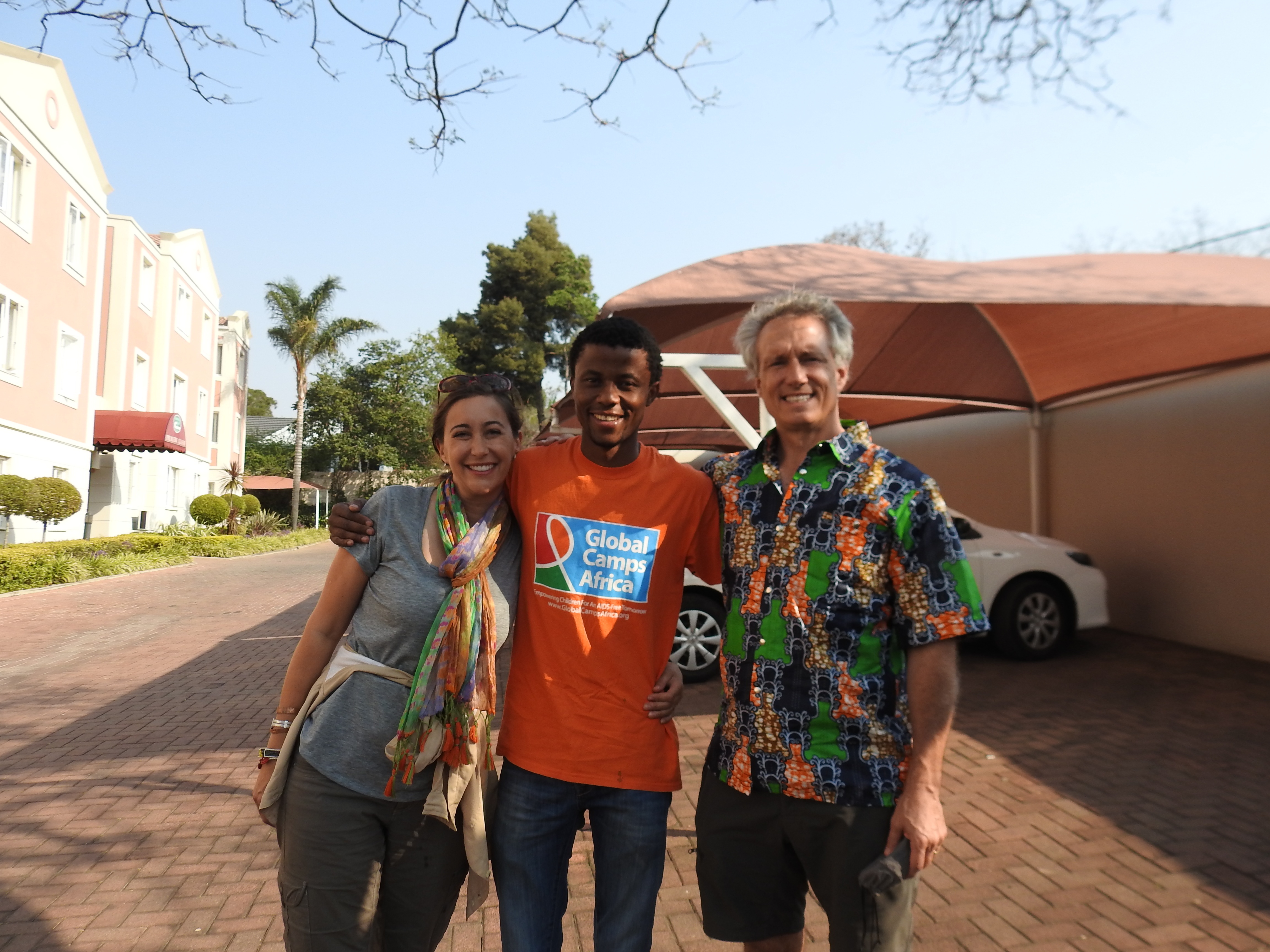 KB works for Global Camps Africa, a program that provides free camp experiences to children in South Africa who have family members infected with HIV/AIDS. I will share more on Global Camps Africa in a later blog, but here I simply want to honor a kind and lovely human. KB was raised in a shanty made of corrugated metal with a fence around it. 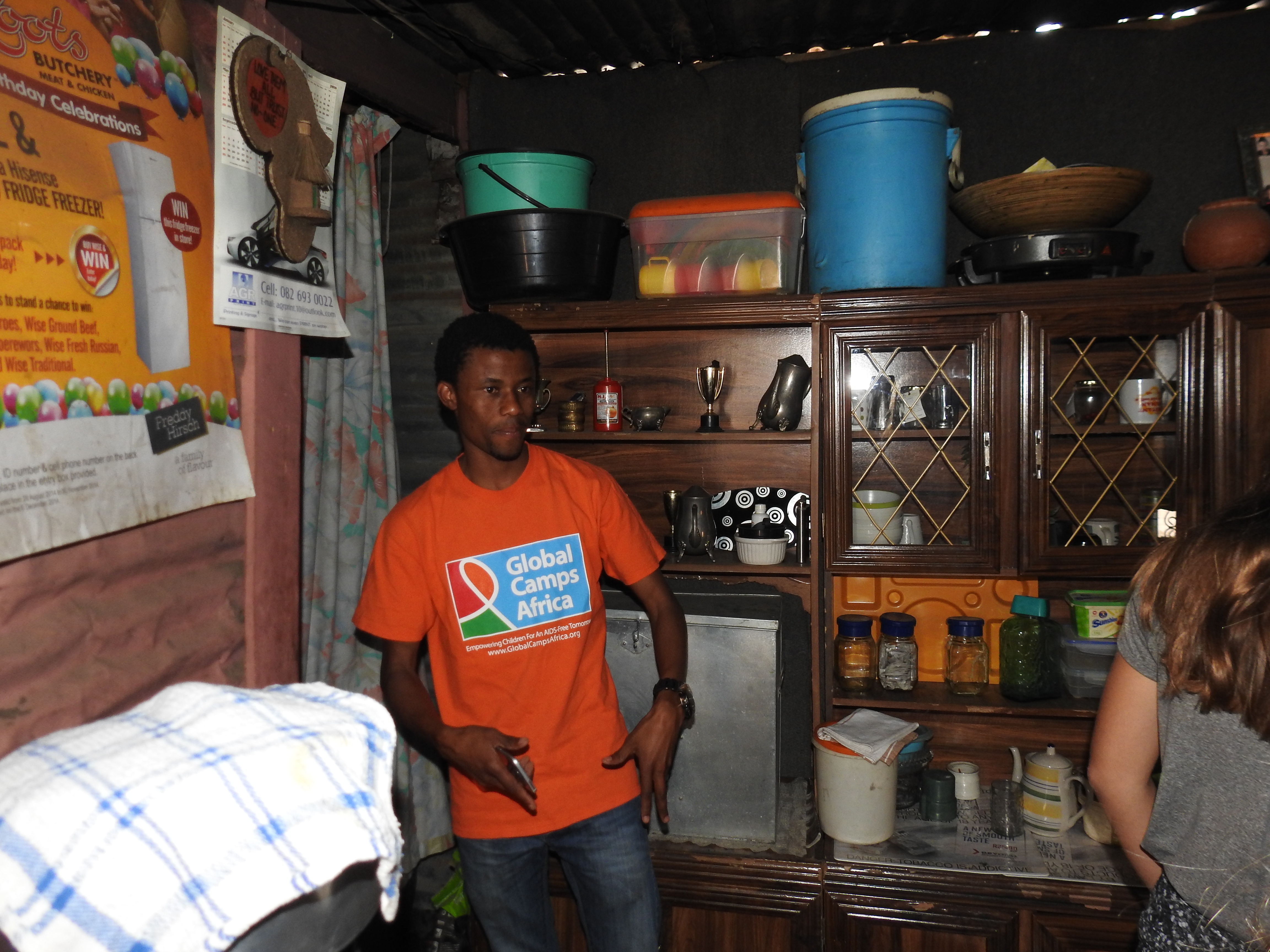 They do not own the land – this was a “squatter’s village”. The government provides six port-o-lets and one water tap for every 1,000 residents. He grew up in this space with his mom and one sibling. Actually, these pictures overstate the size of the home – KB added this room after he achieved some “success” in the real world. 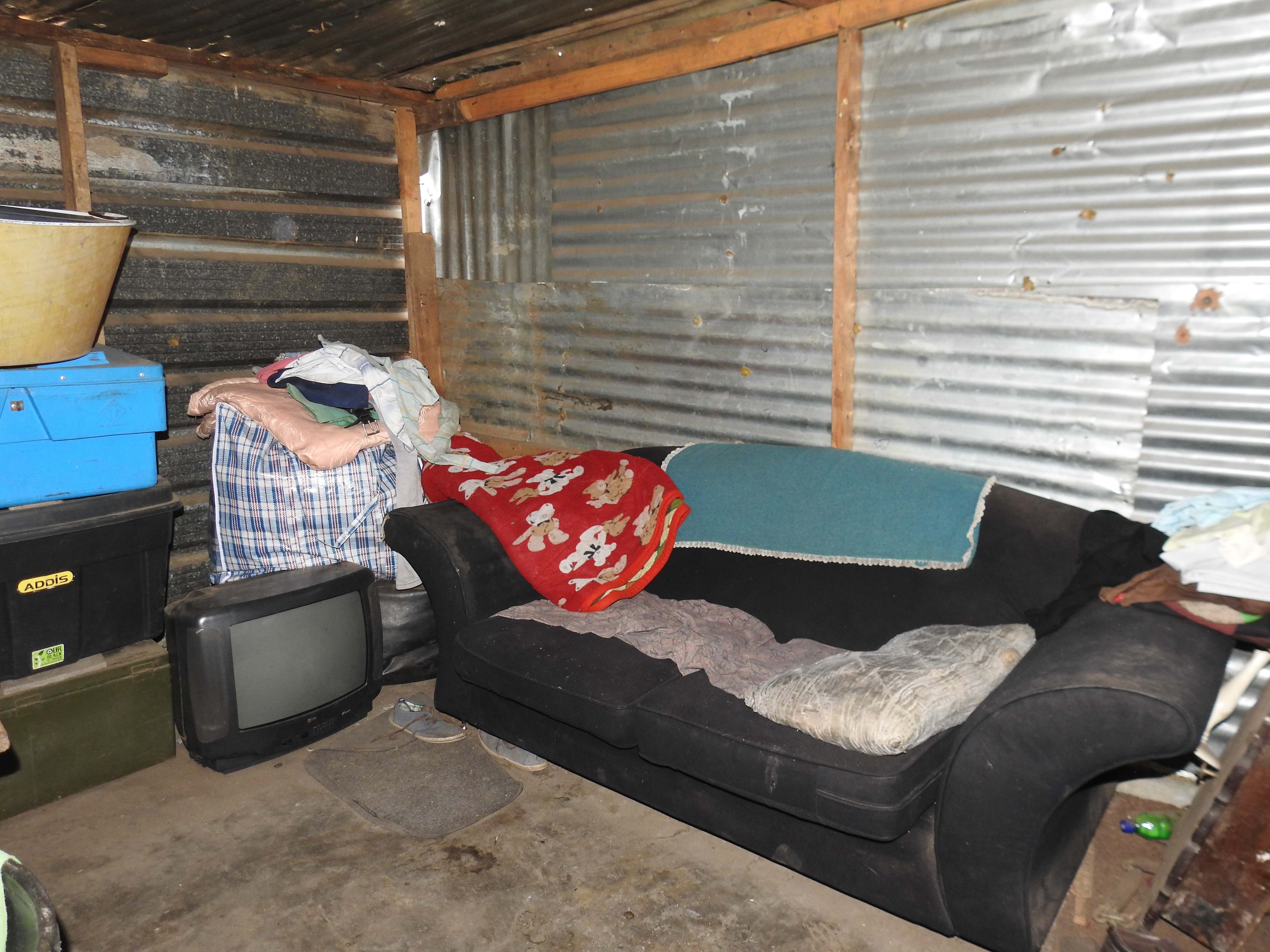 This home is roughly 100 yards from Eldorado Park, the site of the signing of the Freedom Charter in 1955 by Nelson Mandela and many of the early non-white leaders in South Africa. 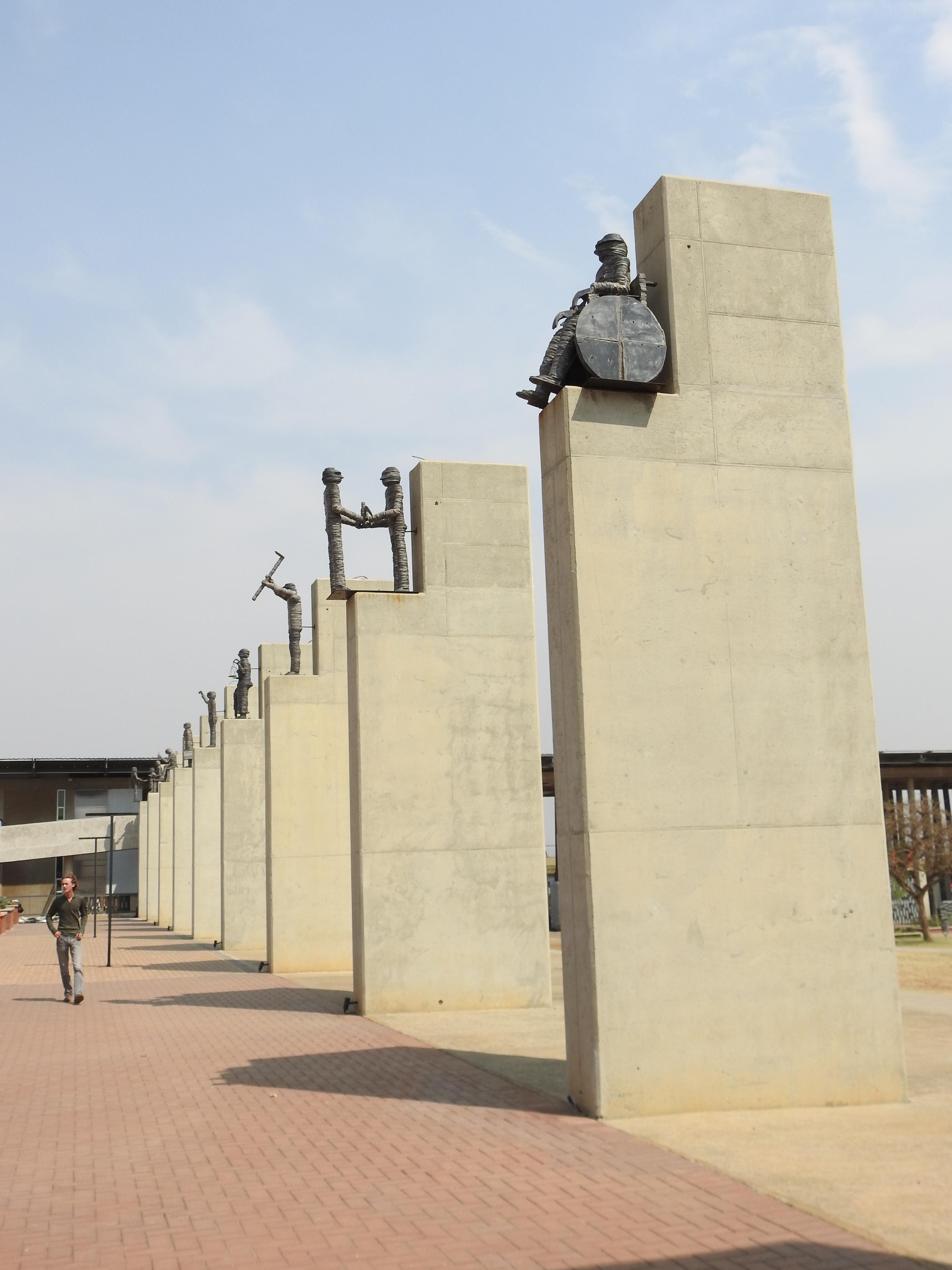 After achieving some financial success, KB moved his mother out of the shanty into a home with running water and indoor plumbing. She was moved at her son’s generosity, but she missed her community. She soon moved back.

Wherever we walked in his neighborhood, people waved at him and called his name. They, like us, both appreciate and admire him.

One final KB story. We learned that he is recently married and has a 4-month old son. We thought it would be fun to hear about their courtship. What followed is a lovely, if not bizarre combination of tradition and modernity.

He and his now wife were both part of organizations that received grants from the Kenyan government. While at the Kenyan embassy in Joburg, KB needed to use the bathroom. He found the one bathroom and opened the door to see a beautiful, but also deeply embarrassed, woman inside. Mortified, he begged for her number so that he could apologize. After on hour of lobbying, he got her number.

He called to apologize and offered to take her on a date.

During that first date, he told her that he believed she was the person he was meant to marry. She called him a fool and told him to change the subject.

Subsequent dates all shared the same basic characteristics – they would have a great time, he would lobby for marriage and she would dismiss him.

KB was one of the camp directors at a resident camp in China that we were helped to develop. His work there enabled him to save enough money to buy a ring. Apparently, some combination of his charm and this physical symbol of his commitment led her to say yes.

Here is the part where we see both the traditional and the modern. KB entered into negotiations with her family for her dowry. After some give-and-take, they determined that he needed to offer them $2750 in cattle to cement the deal.

That is terribly traditional.

But KB and his bride are also modern. Despite insistence from his relatives that she stop working, he insists that she continue to pursue her career. This is quite unusual for a poor South African family, but he insists that he fell in love with her as a working woman and would not want to change her.