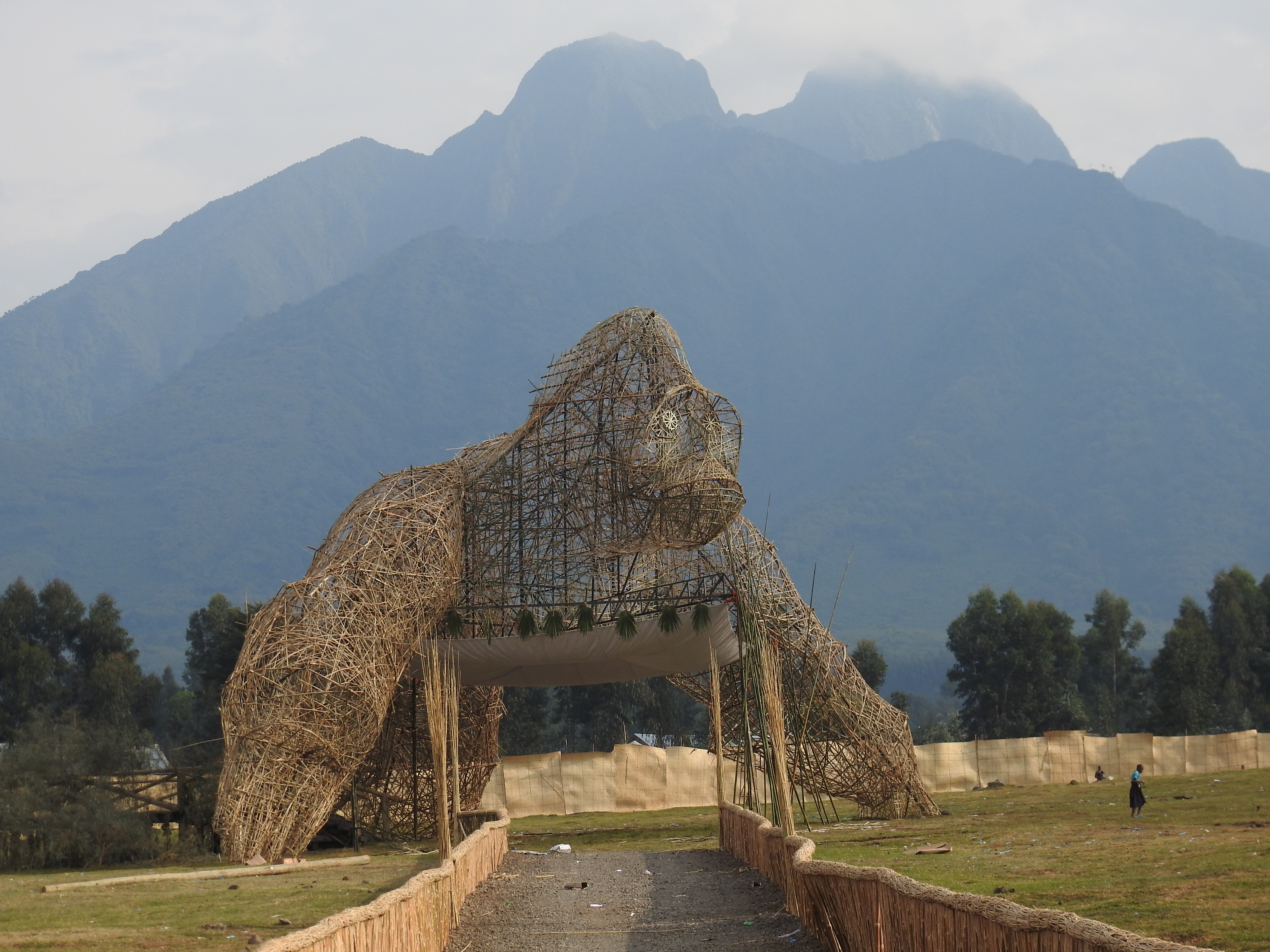 We had the most amazing two-day experience with mountain gorillas.

And we have decent internet.

Feels like the right time to share a bunch of photos and break out some new technology.

Yes, for two days, the Baskins followed in the footsteps of Fosse.

No, not Bob Fosse, the great Broadway choreographer and director. 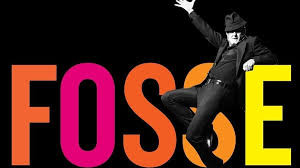 Rather than “jazz hands”, we saw gorilla hands. 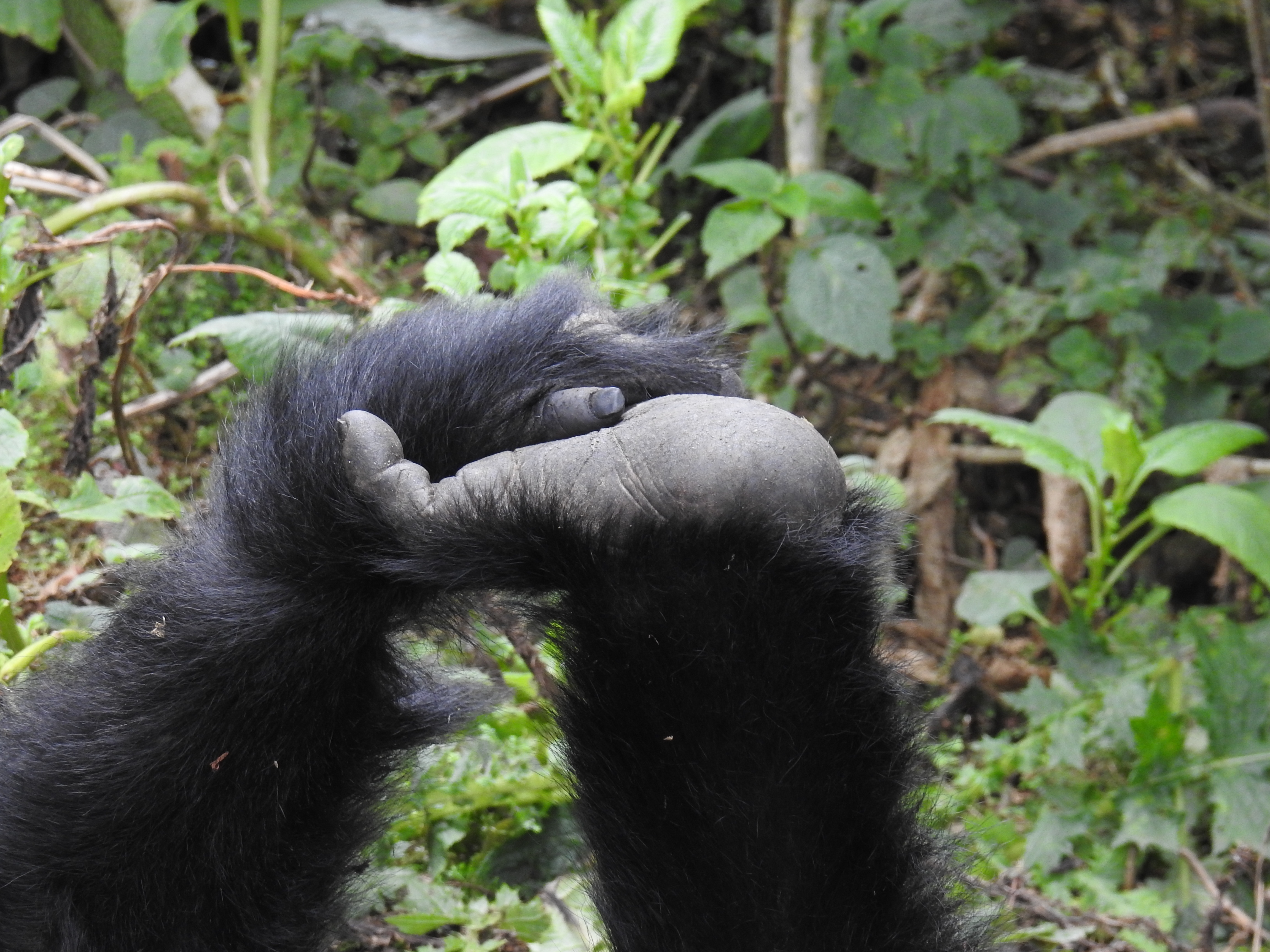 We also saw gorilla feet, faces and bodies. We were in the milieu of the other great Fosse: Dian Fossey, the famous primatologist featured in the movie “Gorillas in the Mist”. She studied gorilla in the wild for 18 years.

We had two 1-hour sessions.

OK, so she won that one.

She also made people aware of gorilla poaching, which has essentially stopped in Rwanda and Uganda. Sadly, poaching continues in the Democratic Republic of Congo, or DRC. For those of you scoring at home, DRC was formerly Zaire. Before that, the Republic of Congo. Prior to that, it was Belgian Congo and the Congo Free State [Note: if you want a profession with some job security, it would be making maps of Africa. Names seem to change at a dizzying rate. While some people think countries do this to escape their pasts, I suspect there is a powerful guild of map-makers.]

Fossey was murdered by an unknown assailant. Some think it was a disgruntled former tracker. Others blame an American assistant.   Many suspect poachers. [Note: if I am mysteriously murdered, please investigate the African map-making guild that I so bravely called out earlier.]

Regardless of the who killed Dian Fossey, her murder propelled her story to the forefront of people’s minds, which has been a real boon to the gorillas (and the gorilla-viewing tourism that pulls in Mzungus – people of European descent – who want to marvel at these animals while smiling and saying “aawwww!”)

We are those very mzungus.

We went into the mountains twice, one 6 mile round trip and one 4 mile trip. The terrain was often incredibly dense and always involved elevation changes. These tales are worth telling separately, so I will share those tomorrow.

Today is just about the gorillas.

The two groups were quite different. The first group was in a semi-clearing. Our guides told us we had arrived during their morning nap. The elders rested while the young ones played. We stood at the side and watched them in front of us. Some were 3 feet away, others 30 feet away.

The second group was actively feeding all around us. When I say “around us”, I mean that they walked past us, sat next to us and often blithely stared at us. Like the wildebeest 10 days ago, their chewing was remarkably loud.

Here are the highlights of each.

First, it had several babies and adolescents that were playing and climbing. One grabbed a vine in her teeth and spun in circles. 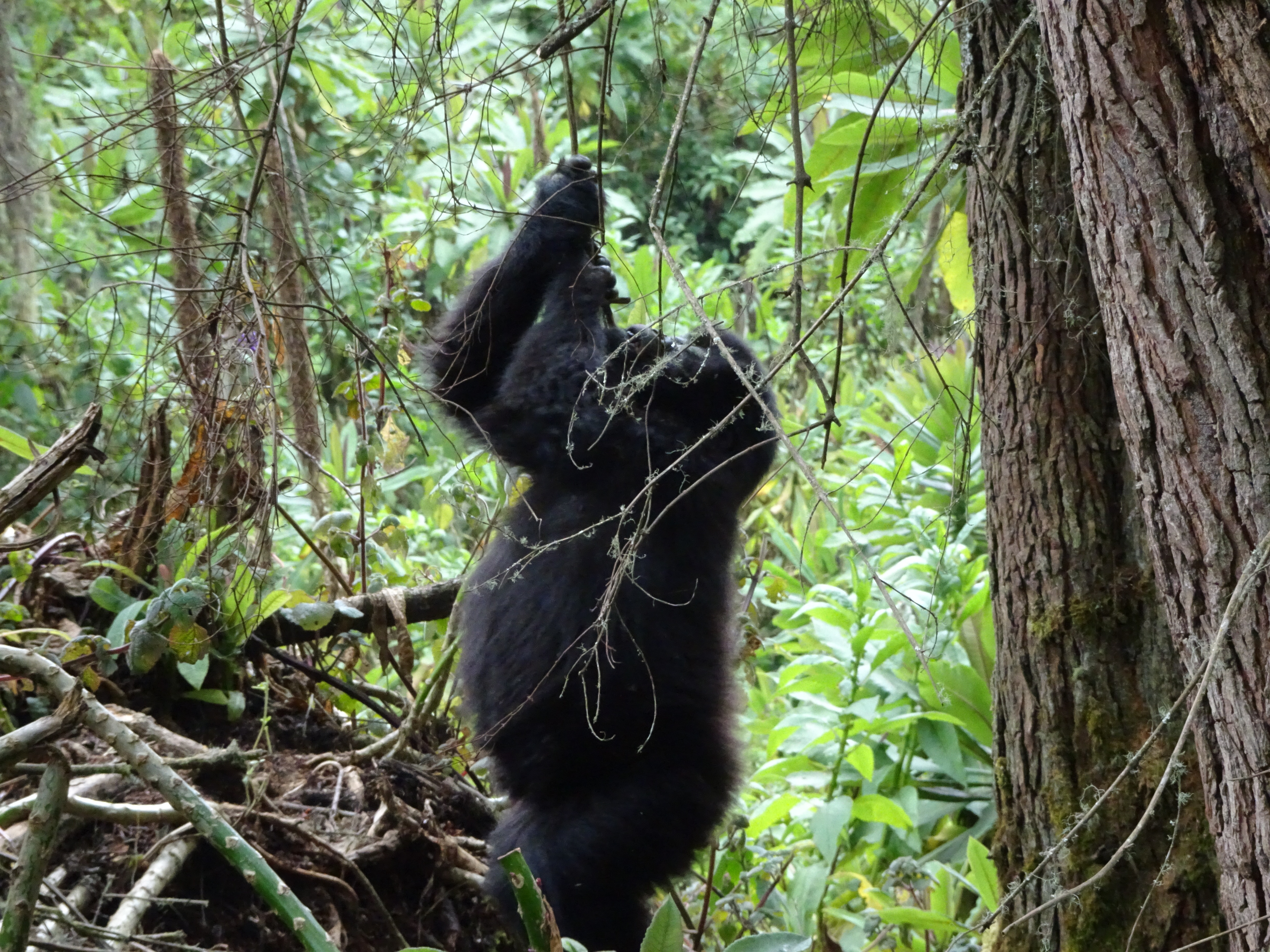 Liam also got a video:

Others climbed a large tree and stretched to reach distant branches. 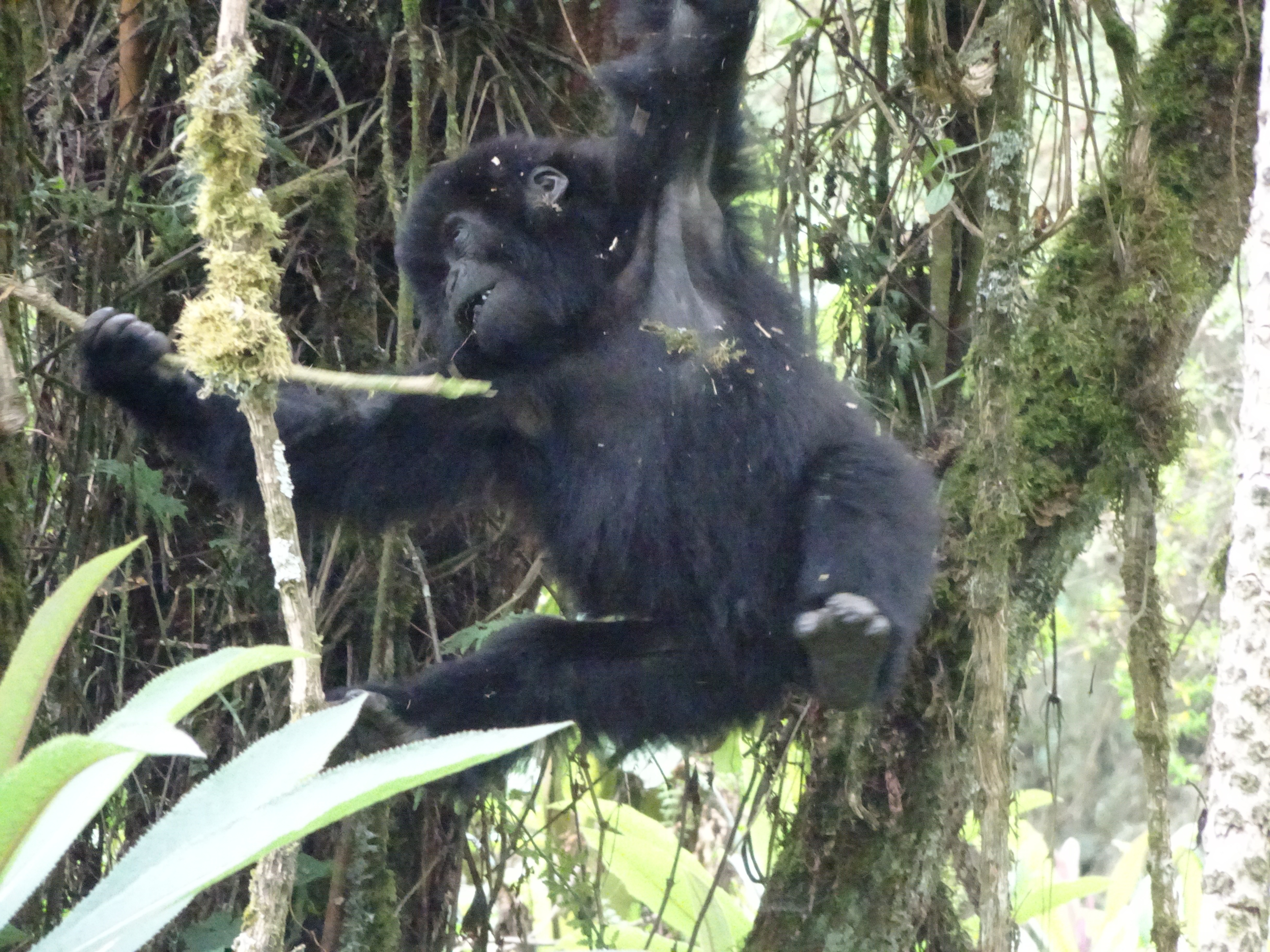 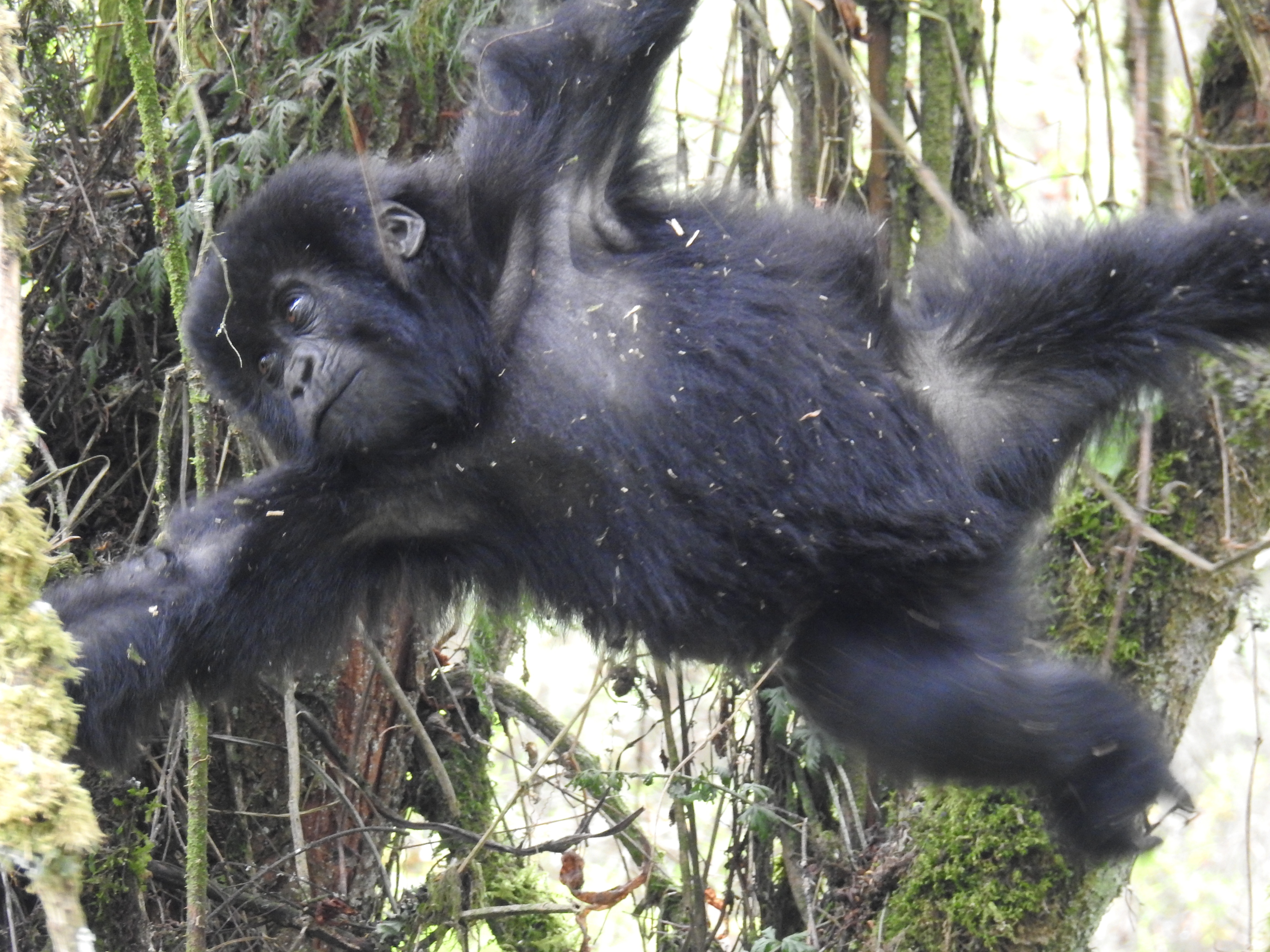 Still others sat and “fought”. 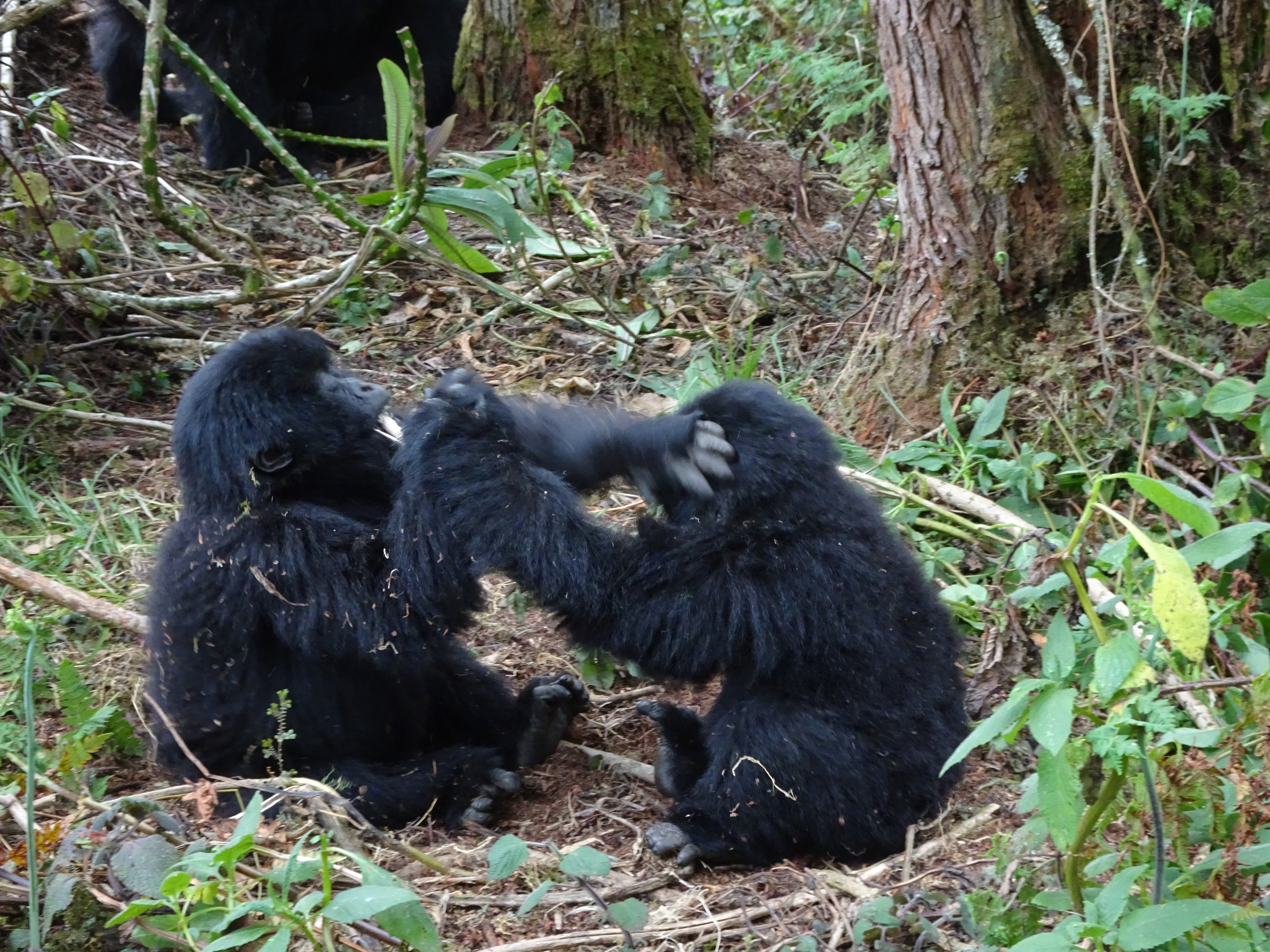 Second, a juvenile male kept beating his chest and charging toward us. He did this 3 different times. Our guides called him “the troublemaker” and even had to push him back once.  I wish we had a better picture, but his mini-chargers always happened so quickly that we could not quite capture it. 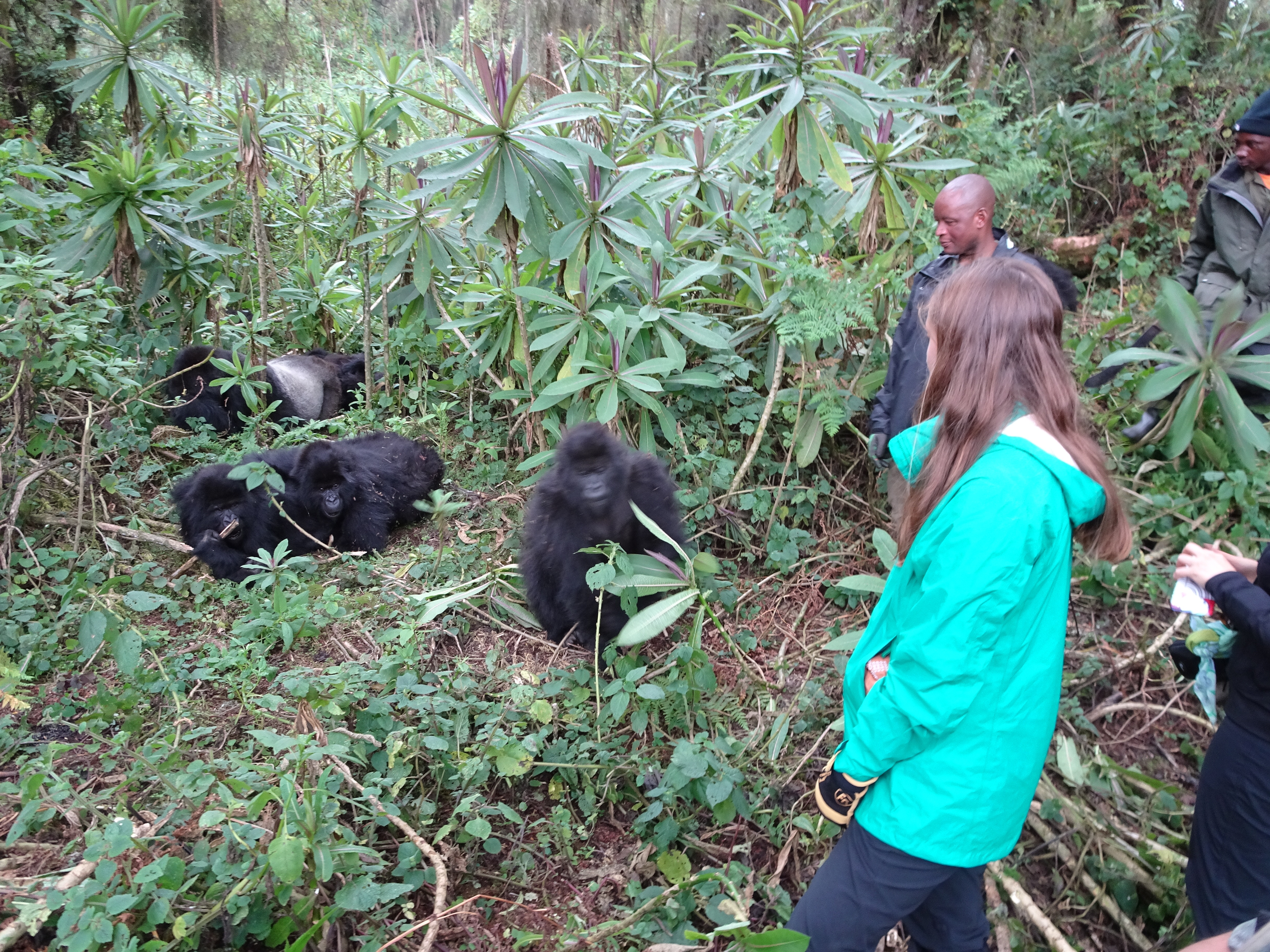 Third, we all just loved the beleaguered patriarch of this family. Each family has at least one alpha male called a silverback (because of the silver fur on his back). He is roughly twice the size of any female and is the father of the babies. At least, he thinks he is. Each group had at least one additional adult silverback (our guides called them “vice-presidents). One of our guides suggested that the vice-presidents do not dare mate with the females while the second guide says that sometimes they do.

So our patriarch was trying to sleep while his progeny wanted to play. They crawled on top of him and surrounded him. 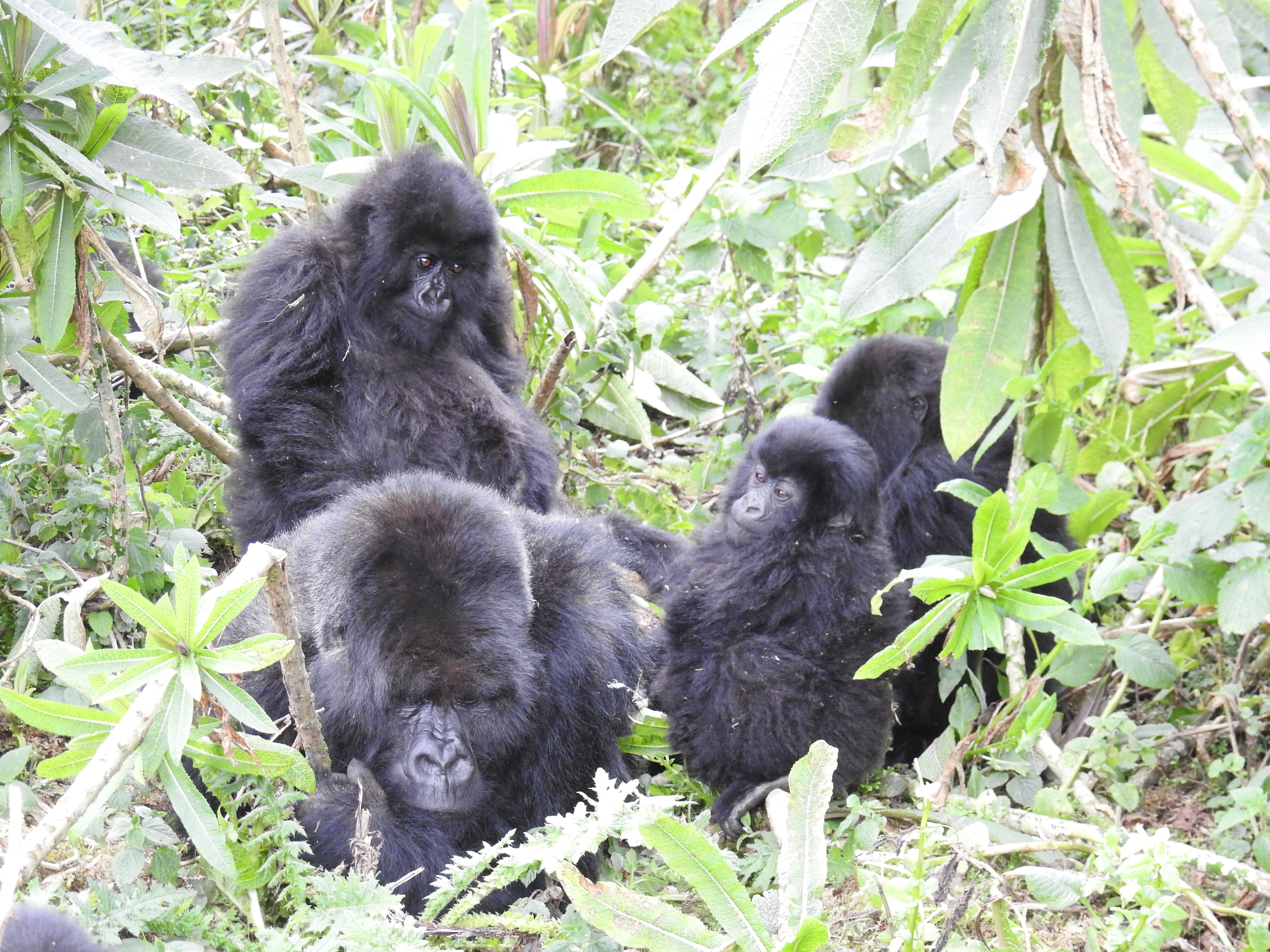 Eventually, they even napped on him. I love the look on his face here. I do not know a parent that has not felt the way he looks. 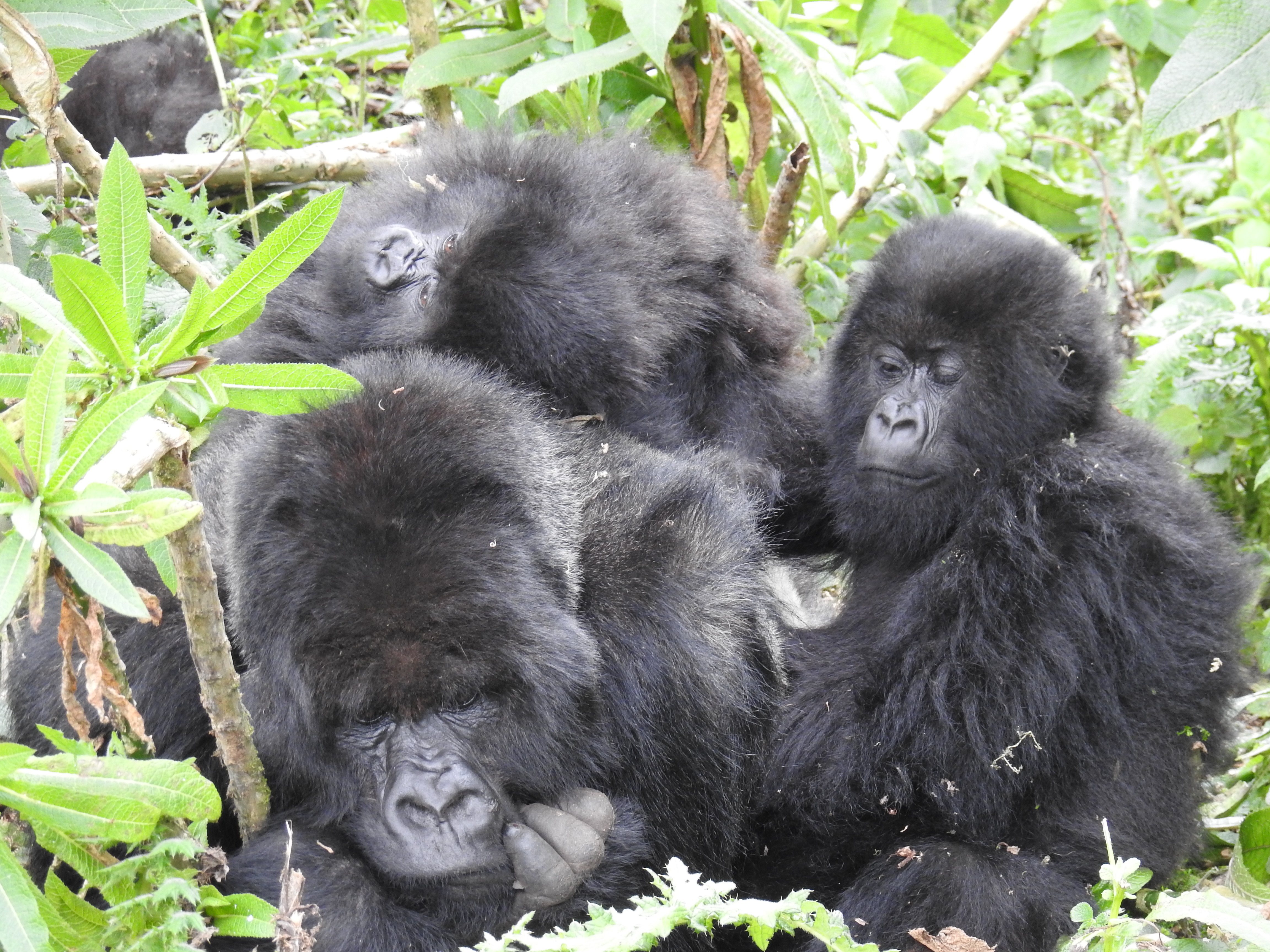 What made the second day remarkable is the fact that the gorillas walked through our line half a dozen times. One even tucked and rolled through us.

You can see how close our friends were here in this video of a mom walking with her baby on her back.  This is the preferred mode of baby gorilla transport and is heart-grabbingly cute.

We were close enough to get some really engaging photos of faces. 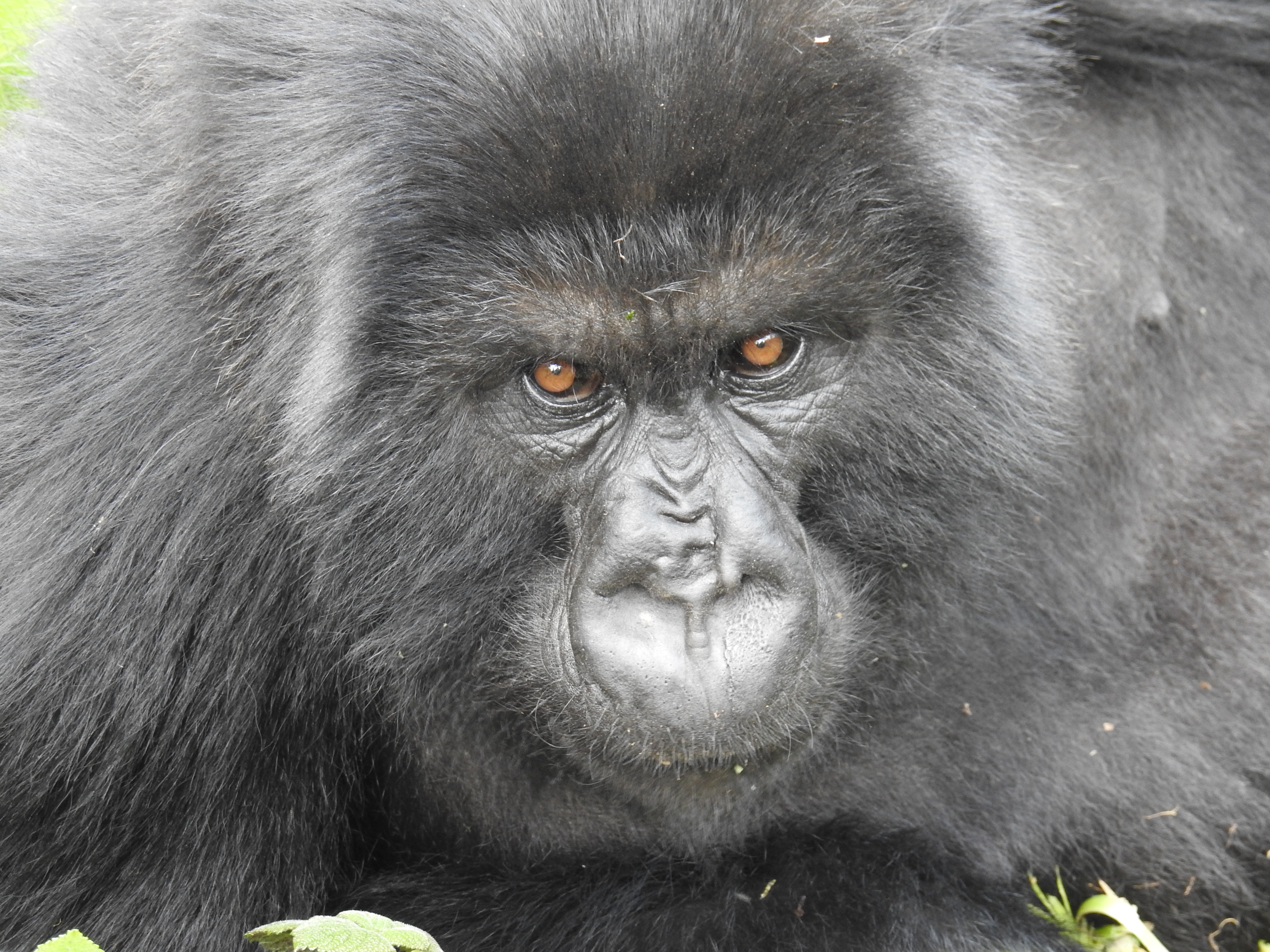 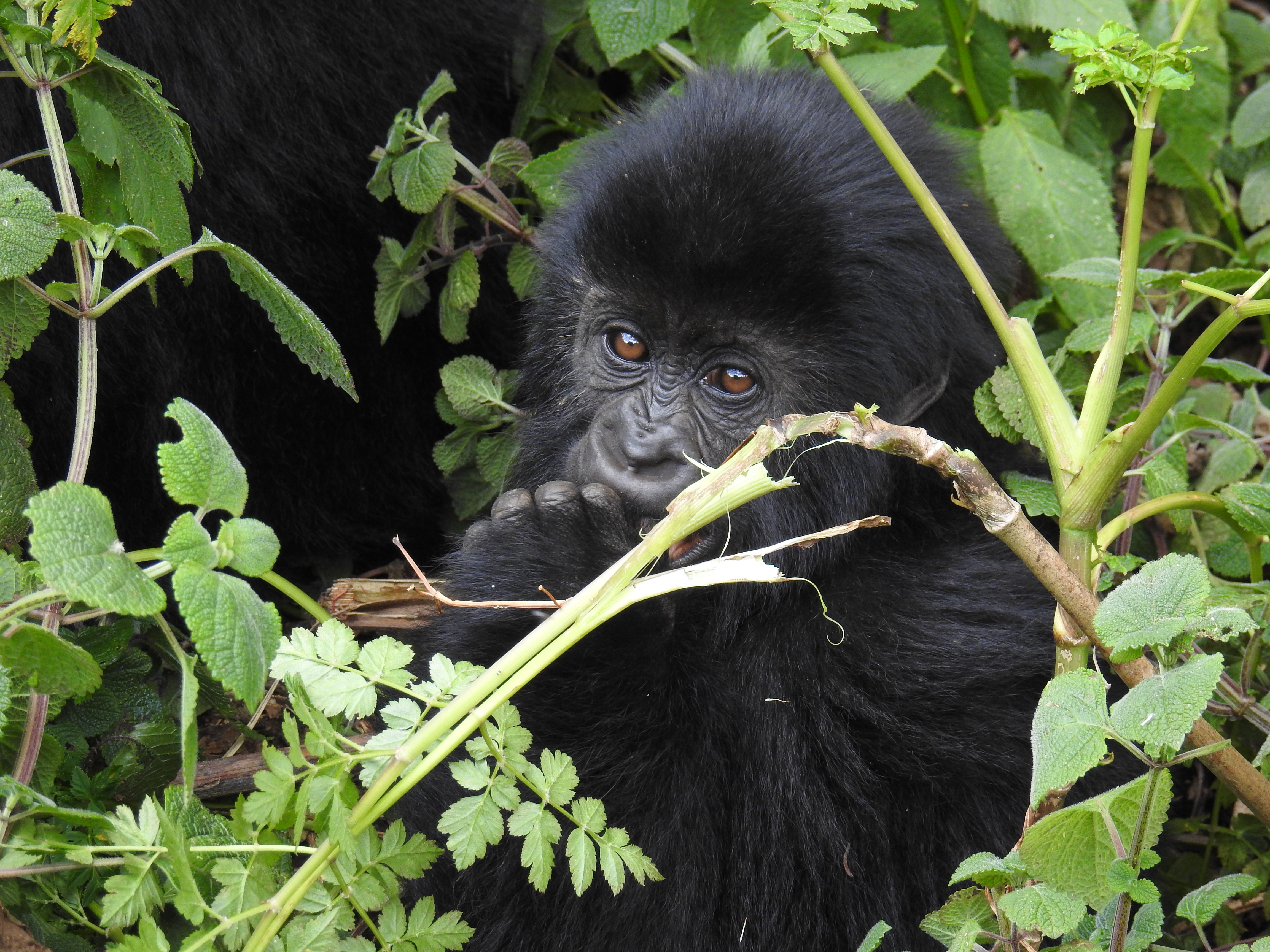 Here I am with a new buddy. 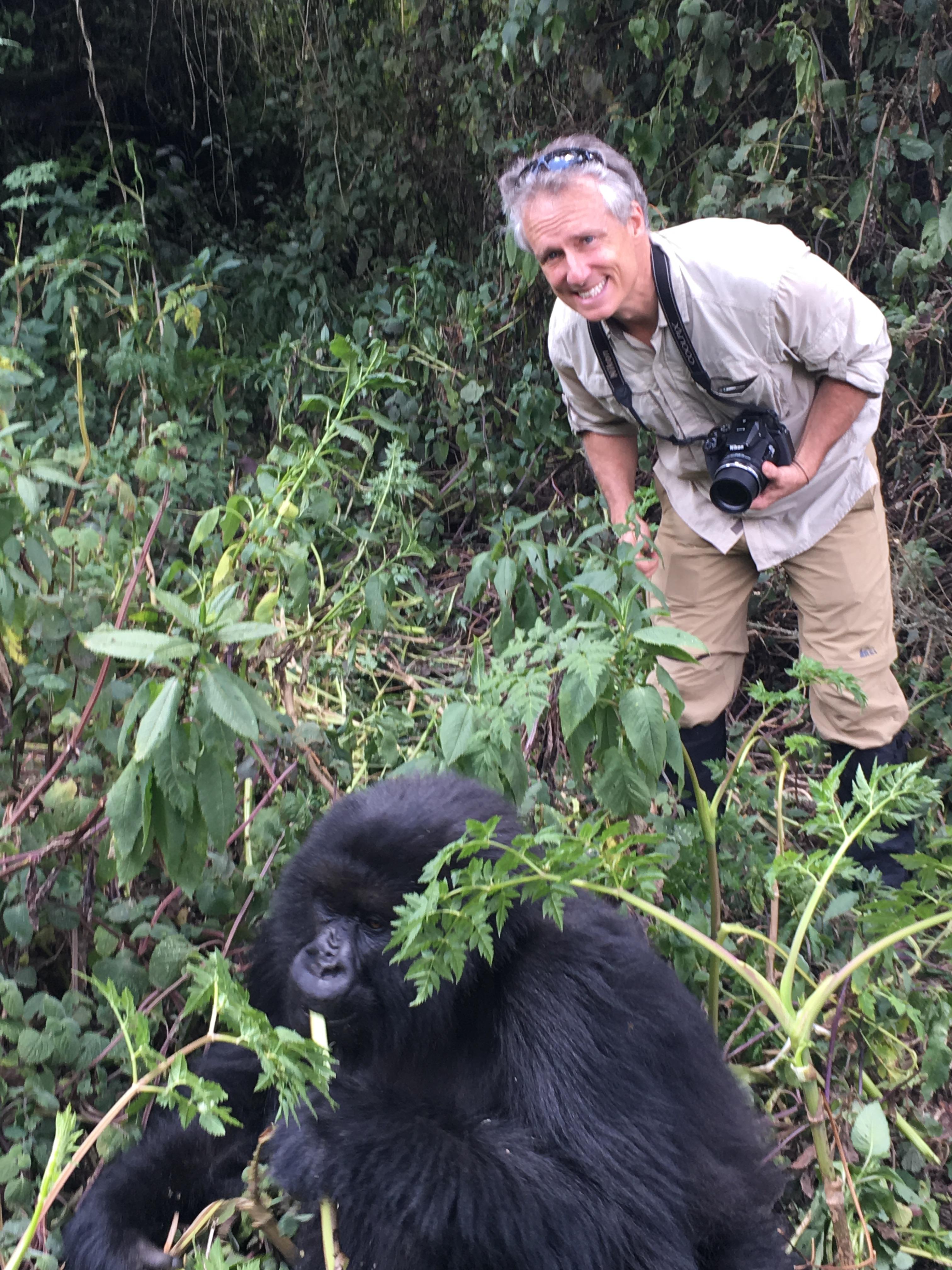 Check out how close this silverback comes to Virginia, Terrill and Liam.  I had thought we were inured to the proximity of the gorillas, but you never really get used to being close to these guys. 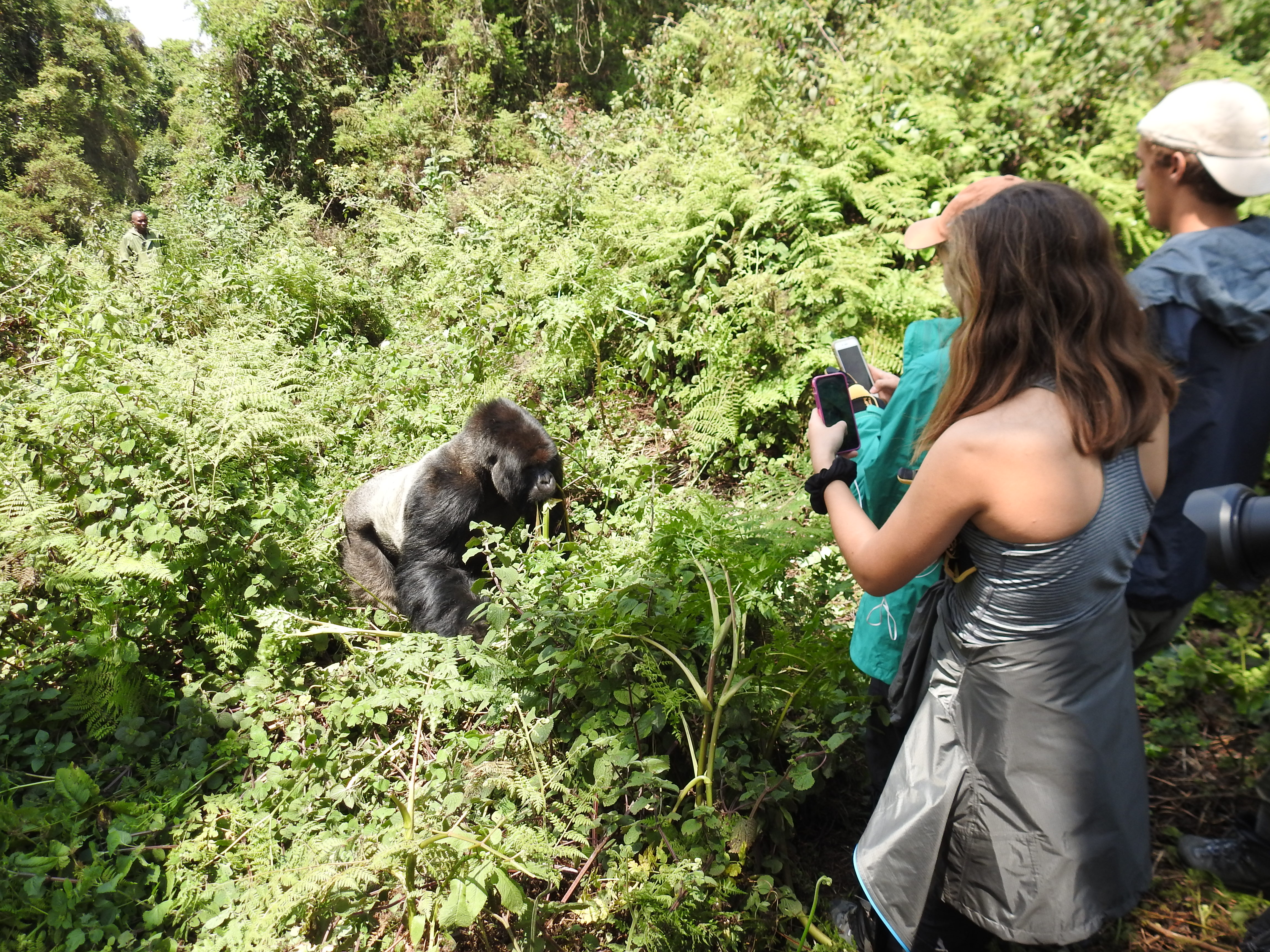 Here is a particular highlight.  A baby kept climbing a short bush and then playfully rolling down. I am so happy to have video of this.

Finally, I share the video that gave us the title of this blog.  A particularly curious guy came close to our group.  Terrill was taking pictures with her iPhone while Virginia took this video.  Being a good videographer, Virginia framed the shot so that you see the gorilla and not Terrill.  This is a shame because she missed capturing exactly what happened.  When you see the gorilla’s right hand shoot out, he is reaching for (and almost grabbing) Terrill’s phone.  She managed to move her hand quickly enough to 1) save the phone and 2) get a fist bump.  She was ecstatic!

I will share the travails of travel with you tomorrow, but I hope you enjoyed joining our journey with the gorillas.

PS  The lead photo is not a scene from King Kong, but a huge bamboo gorilla created for a “Gorilla Baby Naming Ceremony”.  Rwanda is so excited about the gorillas and their accompanying tourists that they have huge events to celebrate new ones.  We were lucky enough to see one of the two babies on day 1, though the mom quickly walked off with him.

That guy was just a tiny ball of black fur. 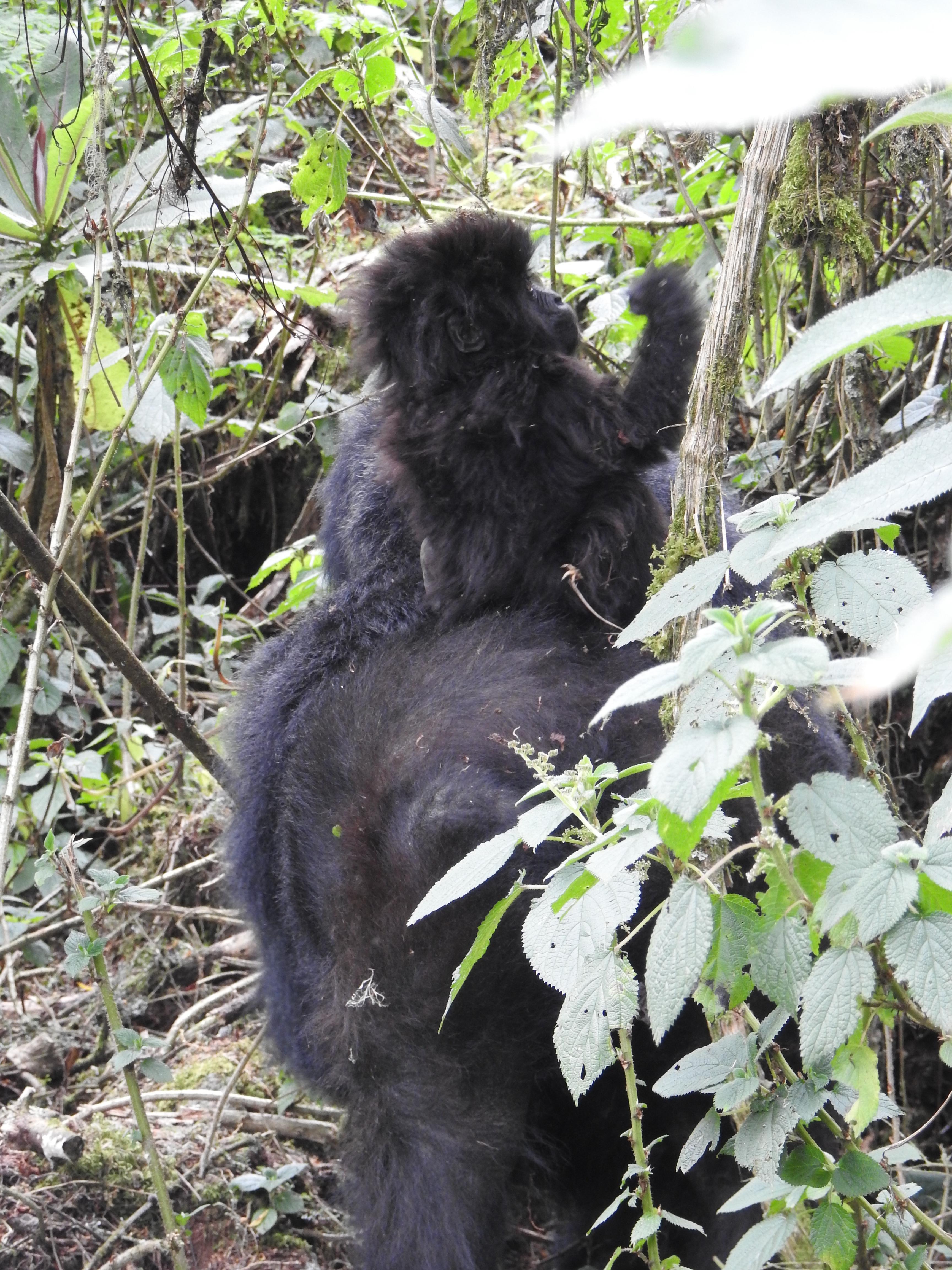