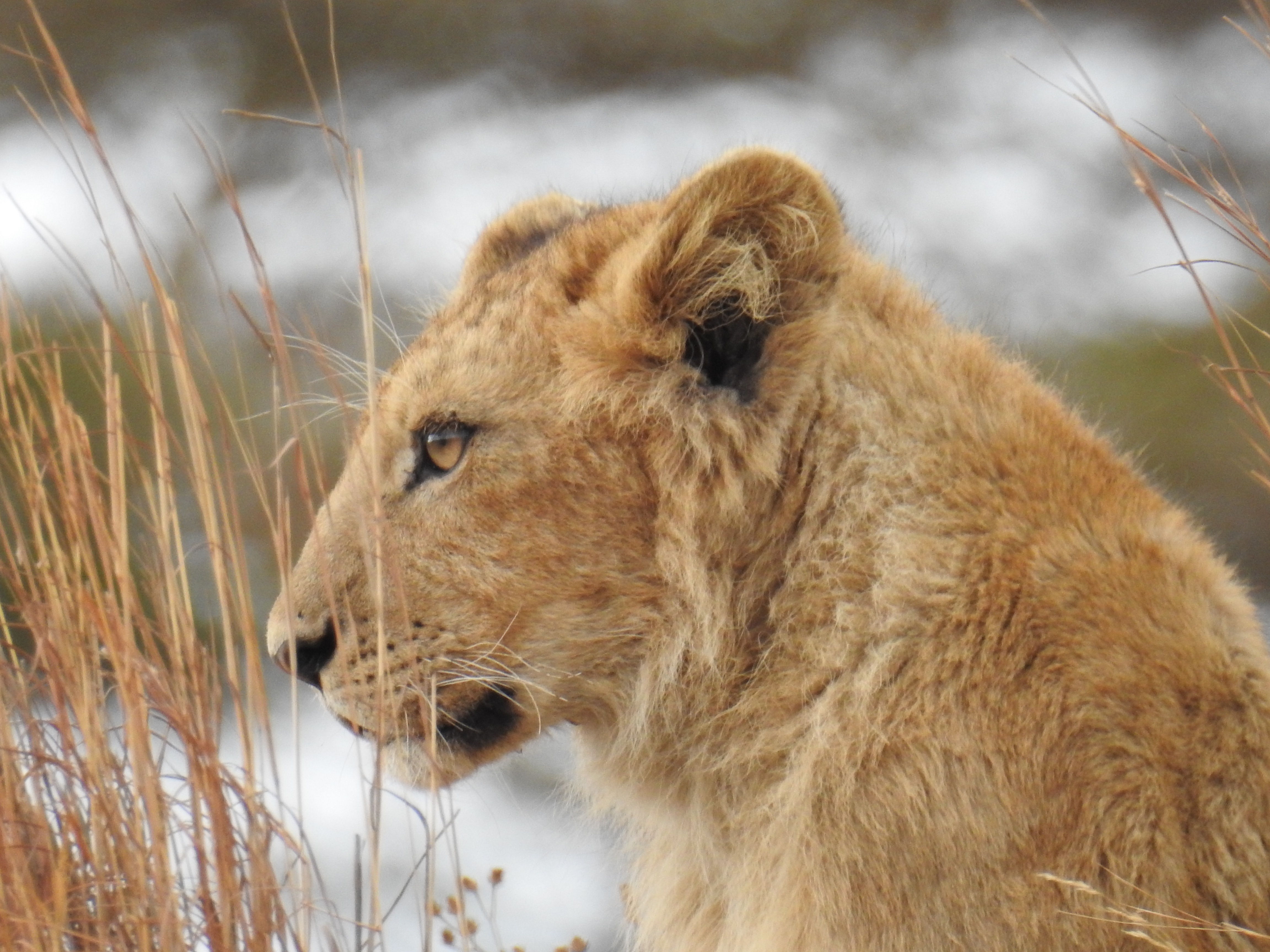 We are leaving Tanzania and on our way to Rwanda, where we will channel our inner Diane Fosse and spend two days with gorillas.

But today is a travel day and I am reflecting on topics that I have not yet written about. During our trip 5 years ago, I would occasionally run out of material. That is not the case this time for two reasons. First, our days have been extremely full, a typical day would hold information, photos and anecdotes enough to fill 2-3 blogs. Second, I have been taking notes on my iPhone every time we encounter something worth sharing, thus avoiding a frequently asked question years ago: “can you remember what I said I wanted to write about?”

During the next two transition days, I will attempt to do a little catch-up.

The first topic is the Ngorongoro Crater.

This crater is the world’s largest volcanic caldera and is an extraordinary wildlife preserve.

It felt like the Serengeti and Disney’s Animal Kingdom’s Kilamanjaro Safari had a love child. It is roughly 125 square miles and 650 yards deep. It also has water sources year round. In short, it is like a natural outdoor zoo. If you only had one day in Tanzania to see animals, this is the place to come.

We met a man from Hamburg who noted that safari in the Serengeti was like hunting for your food rather than going to the supermarket. (A normal zoo or Disney’s animal kingdom is like going to a fast food restaurant.)

The center of the crater has an alkaline (salt) lake, rivers, lush oases and dry plains.

As promised, I have already given you your “photo of animals” blog, so I will spare all the different creatures we saw, but know that it was a huge number.  I will share one good zebra shot so that you will know I am not lying. 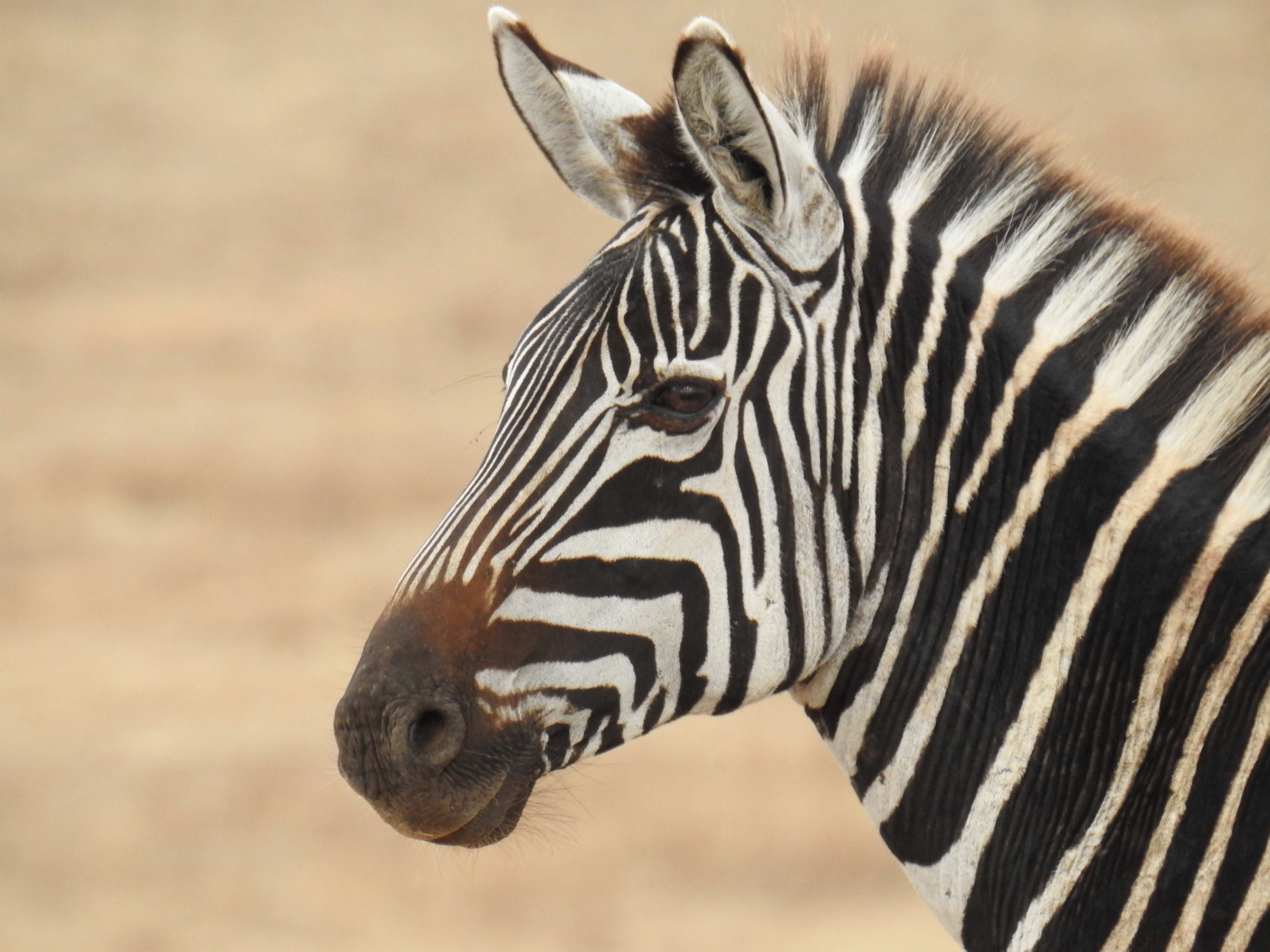 I, however, will share the high point of our day in the crater.

As we were driving, we saw a group of 5 safaris trucks parked next to a hill. As a rule, this is the best way to spot hard-to-spot animals. I would like to tell you that every creature you have seen was spotted by Team Baskin using superior powers of observation.

That would be a great story, but it would be a lie. The vast majority of our best photos were the results of parking next to another vehicle that was already at the site.

When we approached the gathering of trucks, we saw the lioness, which made sense. 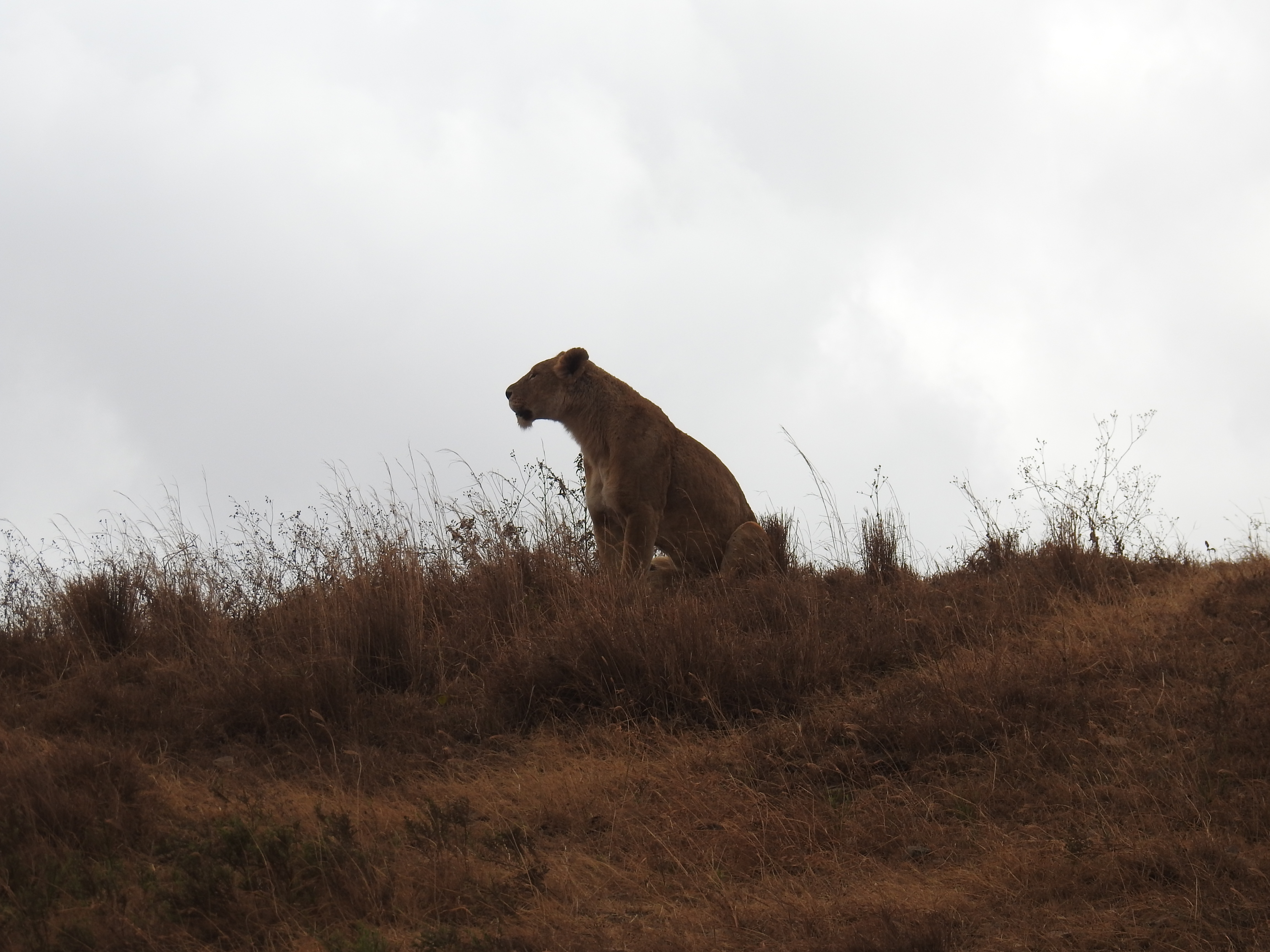 You would expect that. In fact, I developed a rule of thumb that would predict the animal based on number of trucks. One truck equals a zebra or warthog (or a huge herd of wildebeest). Three trucks might suggest a group of elephants or giraffes. Five or more meant a big cat.

But it turns out that we were among the first on the scene, because our caravan would soon swell to over 30.

The reason was soon clear to us. It was not just one lioness. It was two . . . and 6 playful cubs. 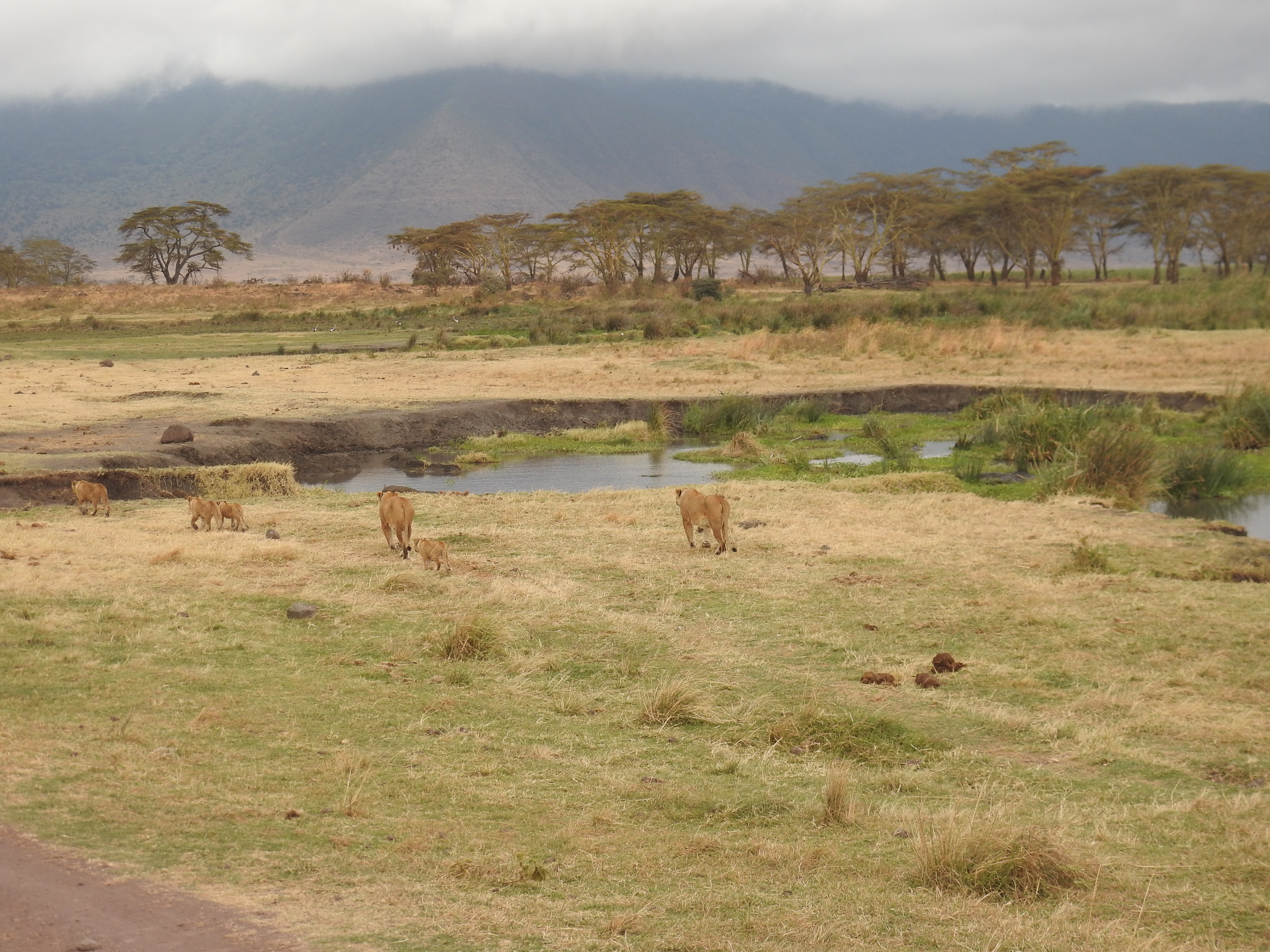 This was a treat – babies and activity. Almost all the lions we saw were sleeping. A panting lion was a bonus. A feeding one was a true treat. The hunting lioness was unique. This experience would be equally exciting. 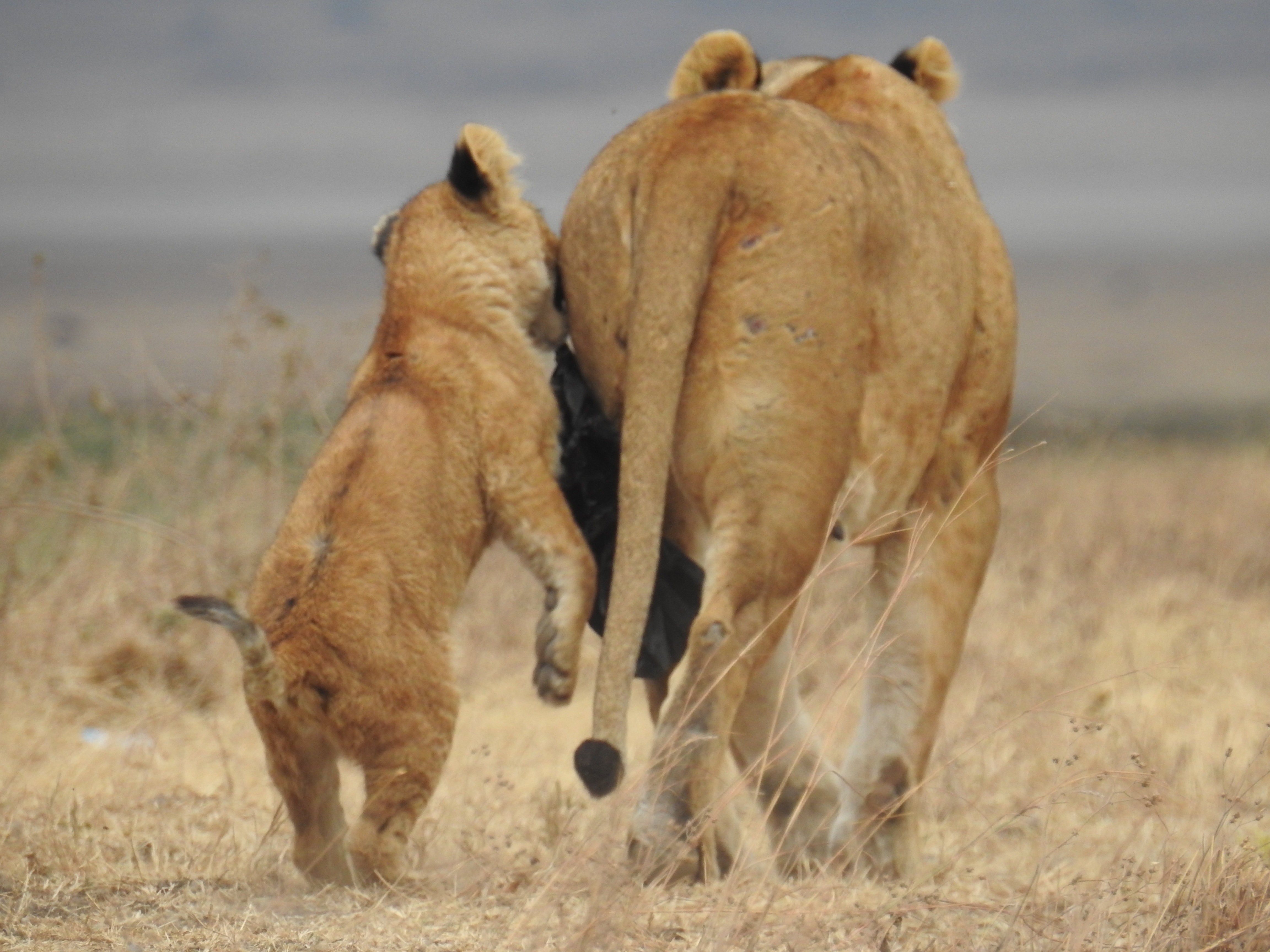 The cubs were like kittens. They wrestled and played. 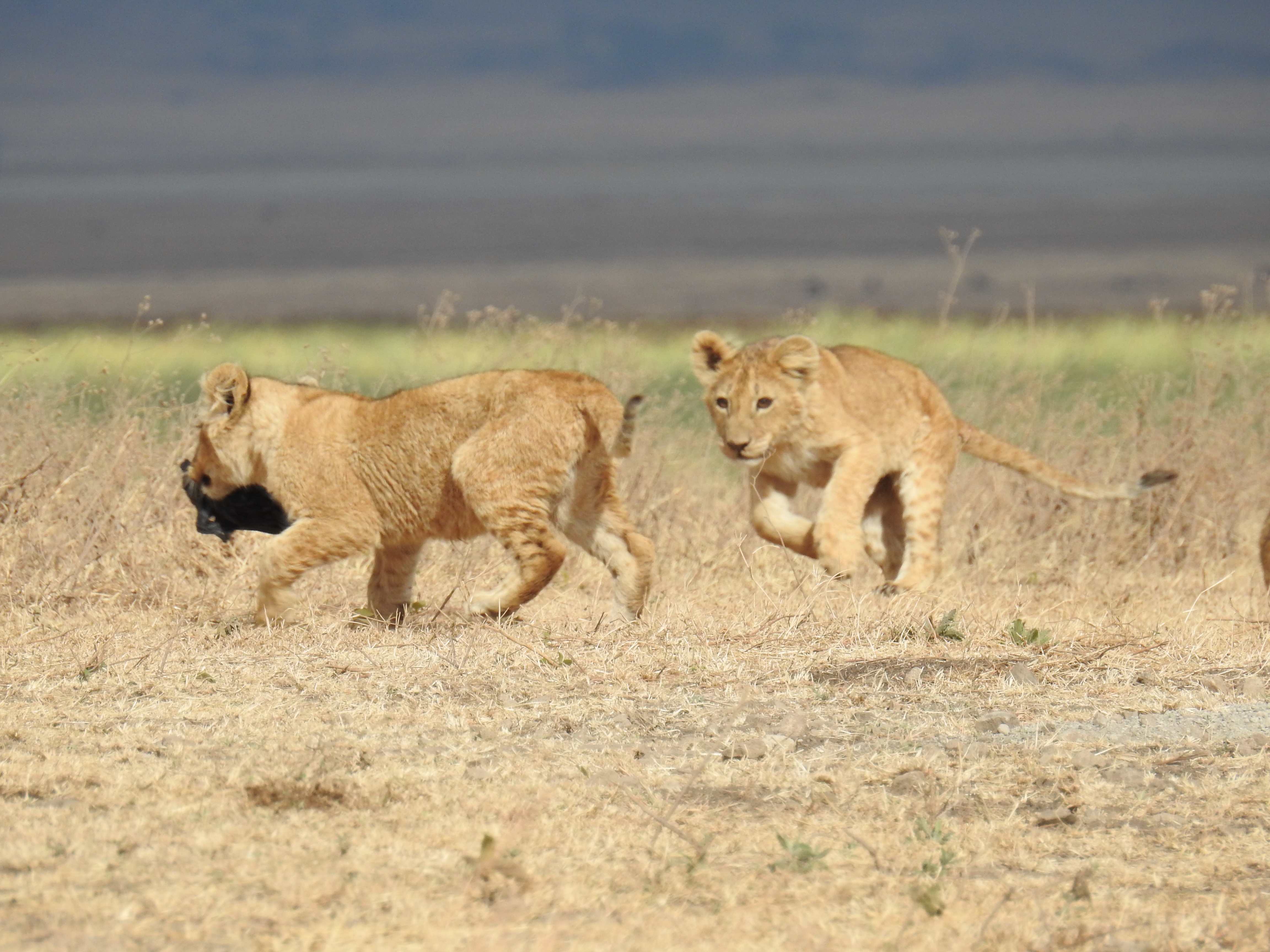 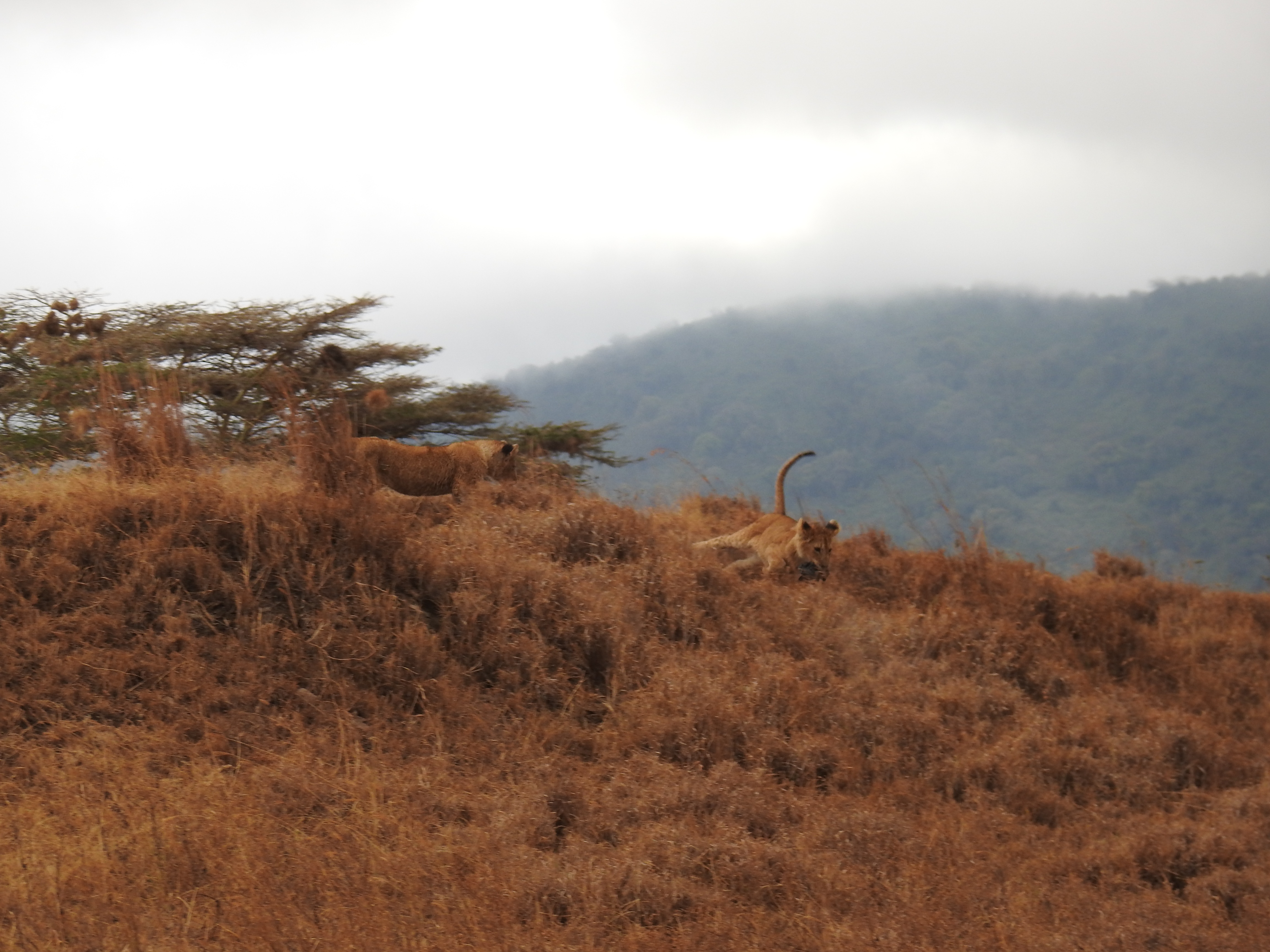 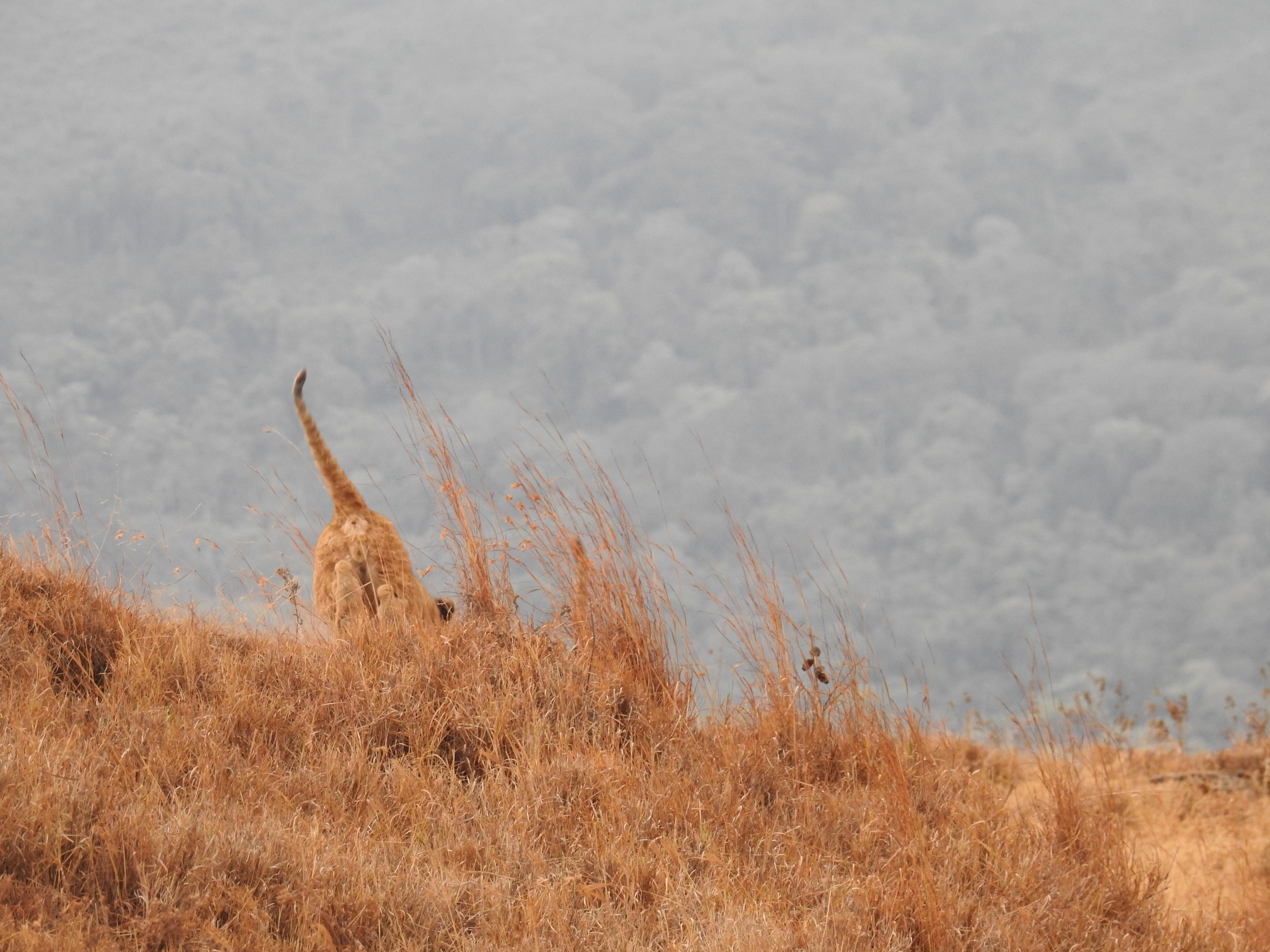 Our favorite was one of smaller guys who had successfully “hunted” a black plastic bag. He was enthusiastically defending his prey from his siblings. 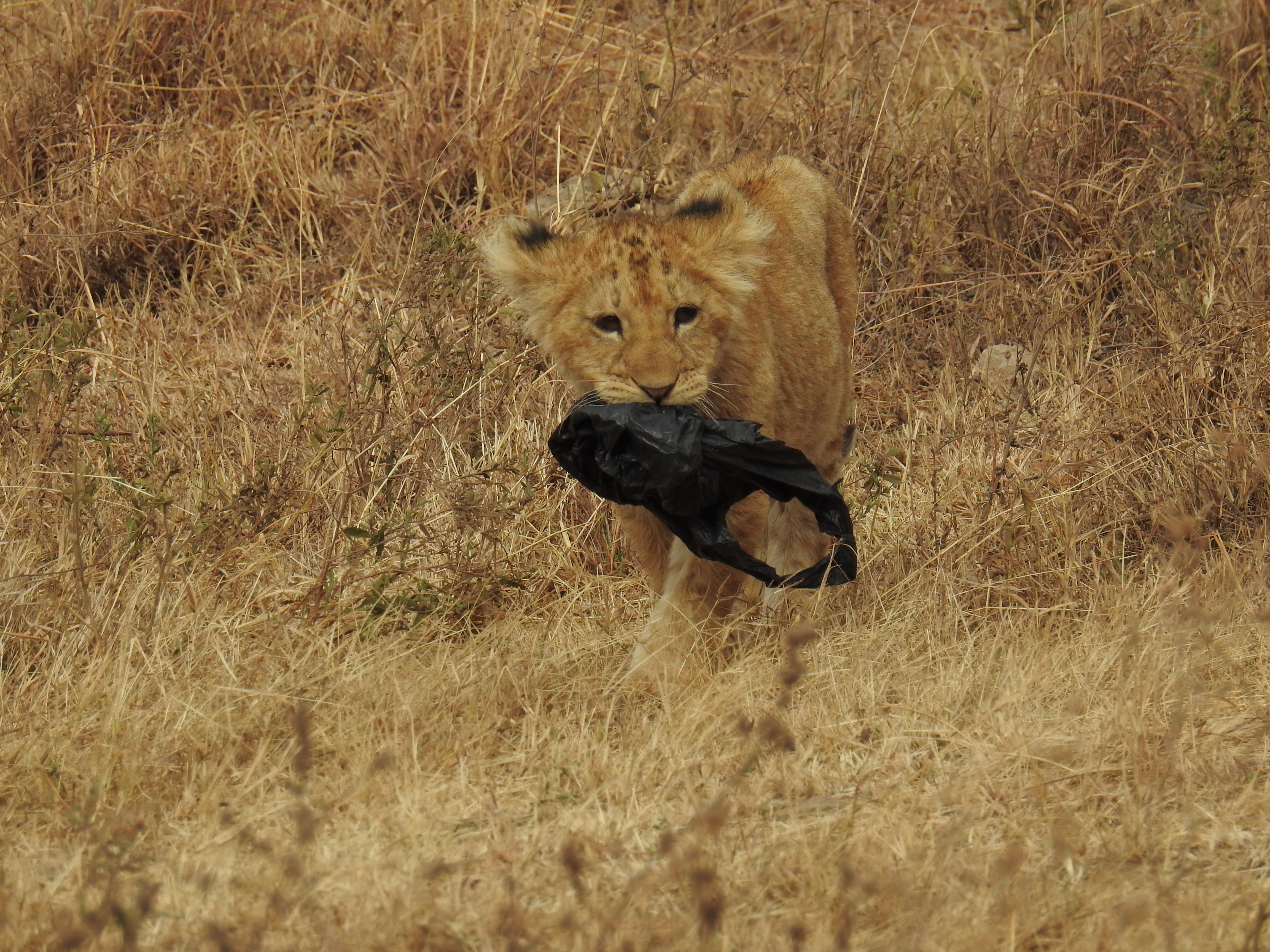 One of my favorite pictures is this one where our young Simba is tearing at the plastic like it was the flesh of an animal. 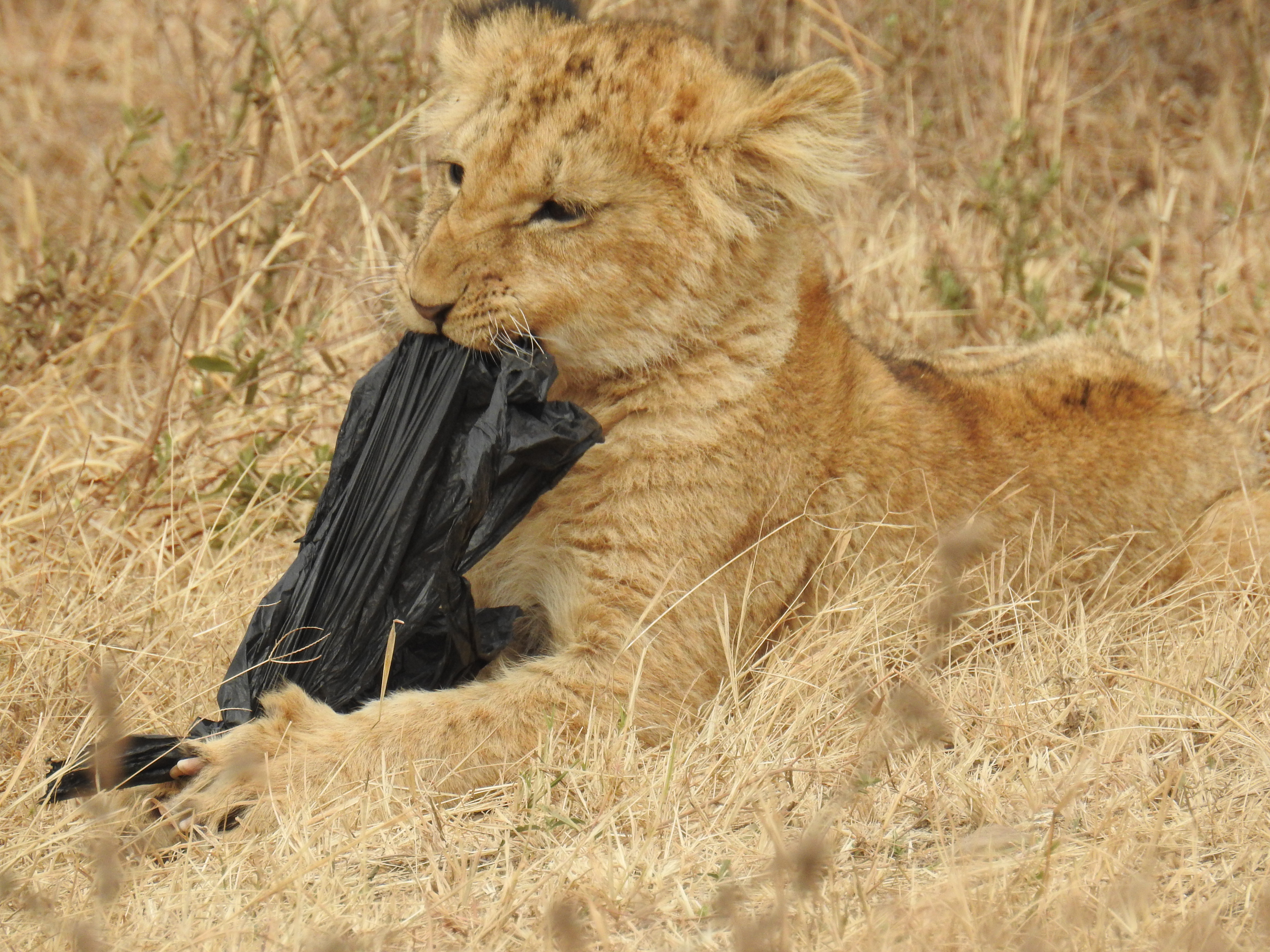 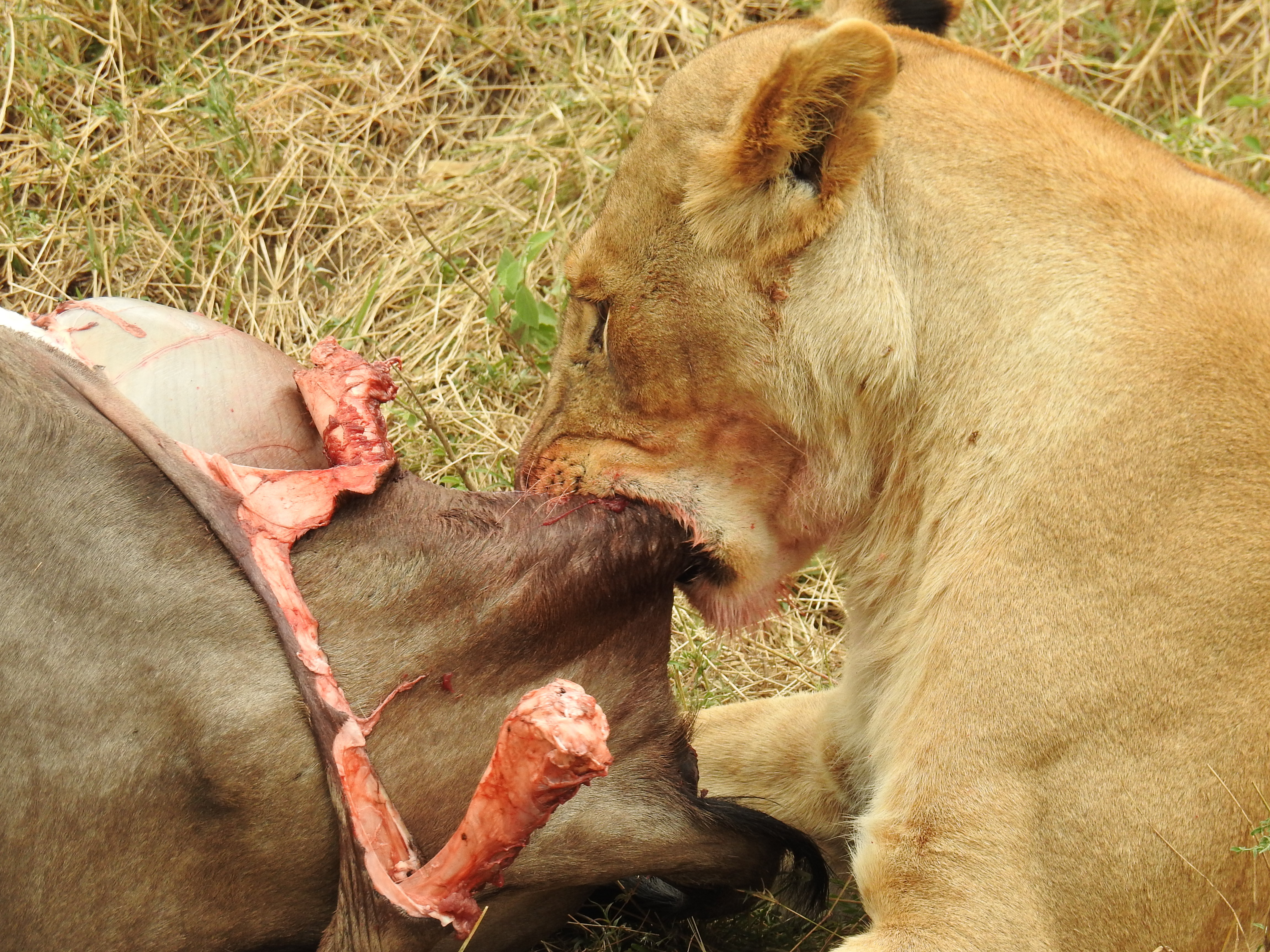 We were delighted to watch this team for half an hour, until they decided to go on a real hunt.

Walter and most of the drivers recognized the shift from play to real hunting, which means that the safari guides need to stay away. Nine of the trucks either did not recognize the shift or they did not care because they followed the cats as they followed a zebra around a small hill. Very quickly, we saw multiple safari guides (including Walter) get one their CB radios to report the infraction.

Within a minute, they were all coming back having received calls from the rangers.

As a lover of cats, I was in heaven.

Our next blog will discuss education and discipline in rural Tanzania. 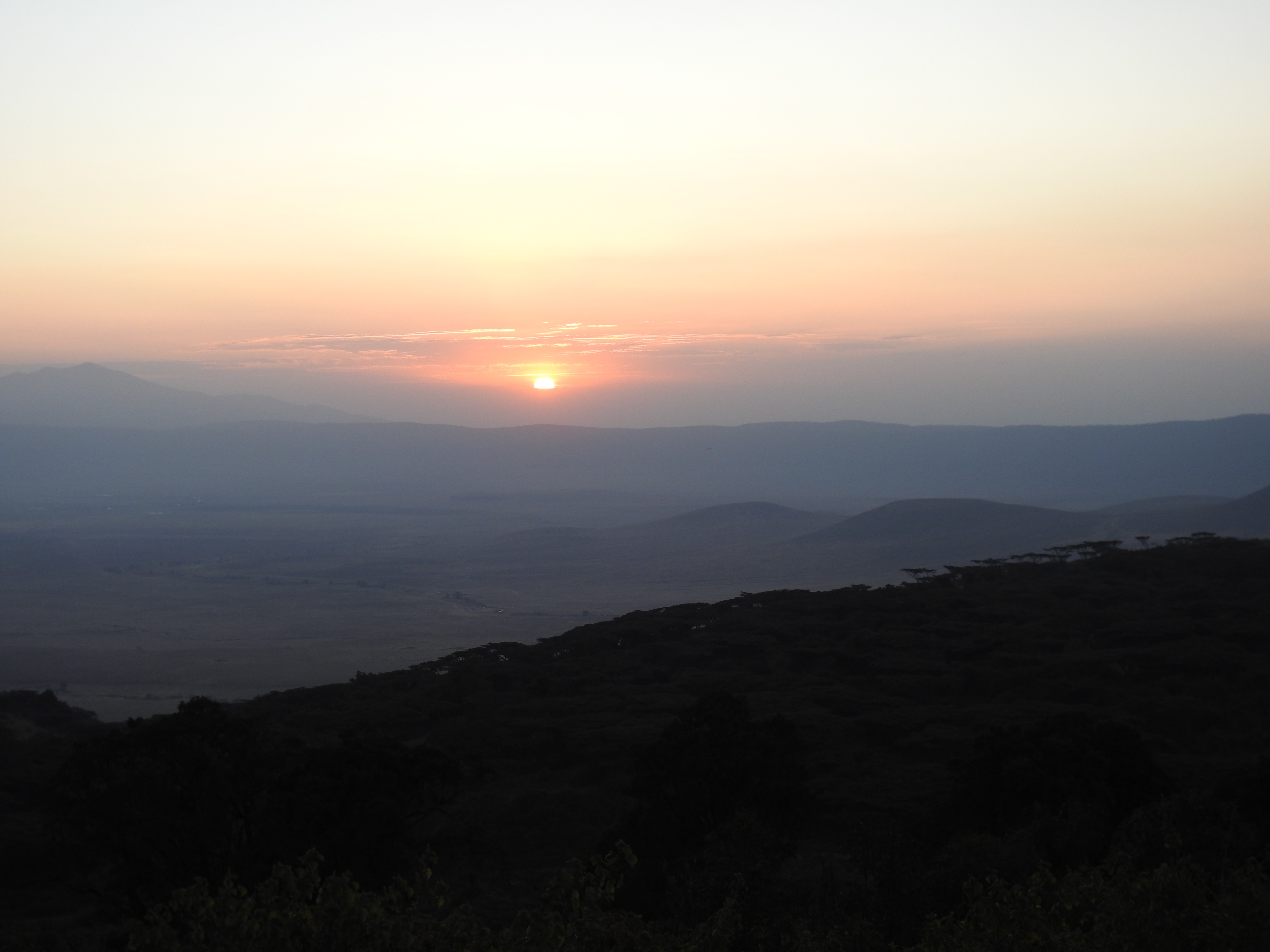