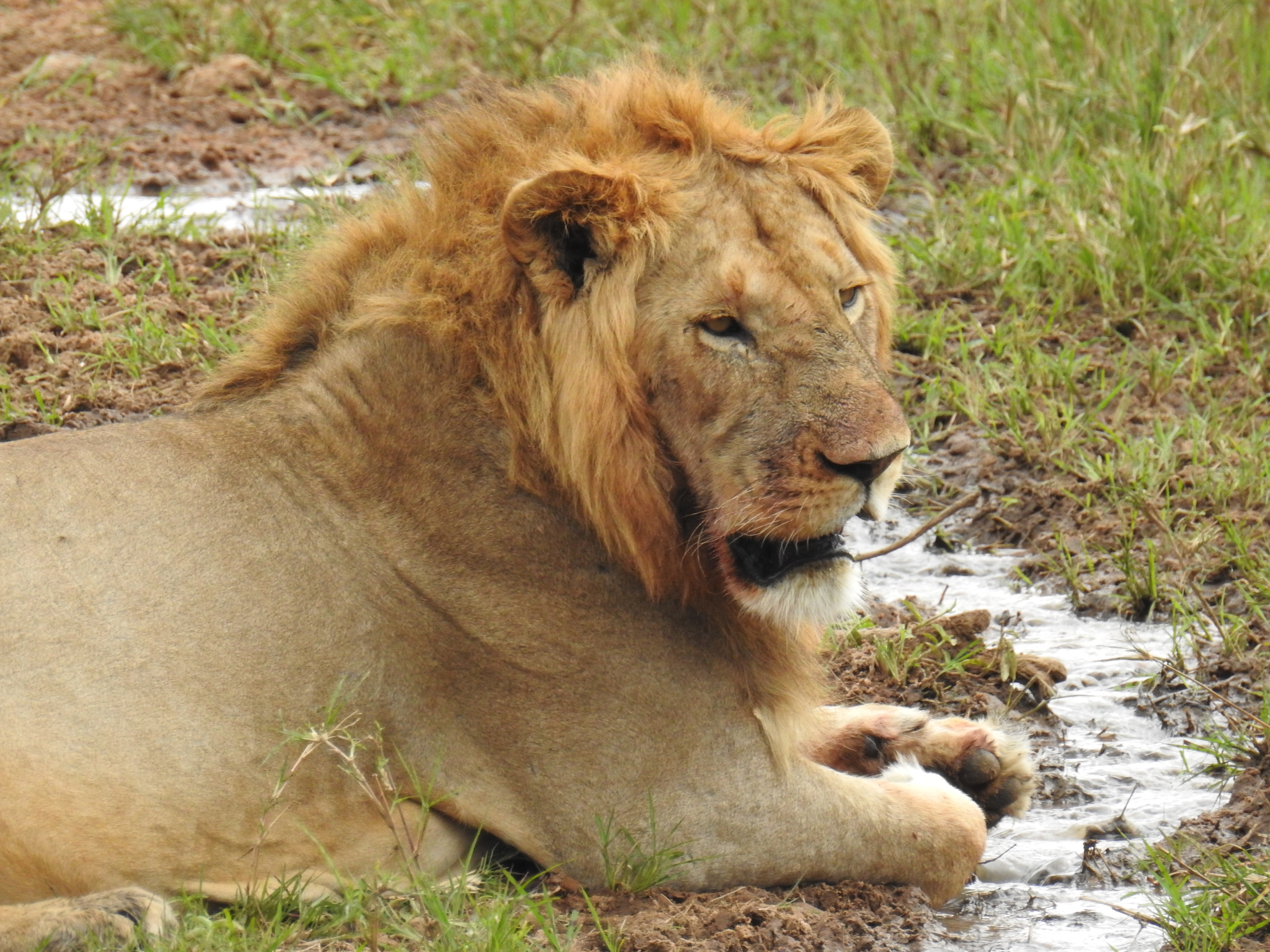 Today, it felt like Mutual of Omaha’s Wild Kingdom. If you understand this reference, you are dating yourself. In the 1970’s and early 1980’s, Mutual of Omaha (the insurance company) sponsored a show called “Wild Kingdom” hosted by Marlin Perkins (sp). It was the first show that Susie and I remember watching that showed potentially dangerous animals from around the world.

Let me be clear here. Marlin Perkins was never in danger himself. He had an athletic and capable animalist named Jim that “engaged” the animals. This particular form of teamwork led to epic lines like the following:

“Watch Jim wrestle with the giant anaconda as I watch from the safety of my helicopter above.”

“Watch out Jim! The baboob looks really agitated. Perhaps you should have stayed with me in the jeep!”

“It was necessary for Jim to subdue the aggressive animal with a tranquilizer dart. Now I will safely exit the vehicle.”

I cannot imagine what Jim thought about Marlin, but the show was a must-see for both of us.

I guess the key to the Wild Kingdom is that it was the first show I have seen that showed the wild in an unblinking manner. It was wild. Animals hunted and ate each other. We had both seen cute documentaries about young cubs or foals or colts, but they were always on the pleasant side. Marlin and Jim showed us that wild animals could be both beautiful and deadly.

With this in mind, let me give you two foreshadowing scenes that happened prior to a fascinating experience today.

Yesterday, we came across a herd of Thompson gazelles. They are tiny (perhaps just 30-40 pounds) and move quite rapidly. They are basically a meal to a Cheetah and a snack to a lion.

As we drove by, we noticed a twitch in a nearby bush. It was a very young gazelle sitting by herself next to a tussock of grass. We asked Walter about her. Why was she separated from the herd that was under a nearby tree?   He explained that gazelles have no way to protect their young from predators, so they train them to stay motionless and camouflaged at short distance away. If a predator comes near the hiding spot, a parent will come close, act injured and lure the predator away. 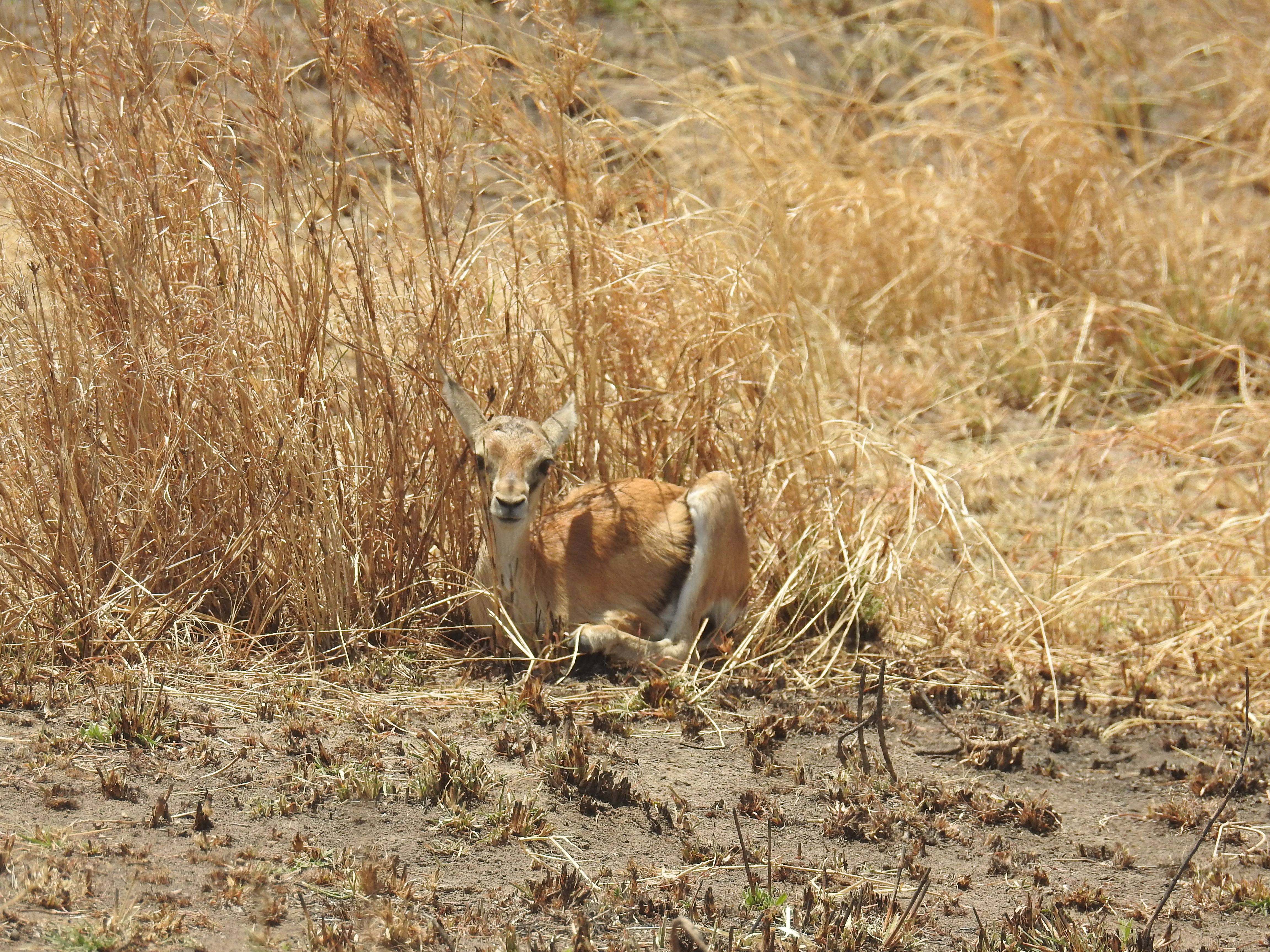 We admired this plan for its insightfulness and its selflessness. Hide out of sight, but count on help arriving.

This morning we saw a lioness near a watering hole. She was clearly on the hunt and several gazelles were heading her way to feed. As they got close, one of them spotted her, dashed the other way and she retreated – hungry and tired.

After a few hours, we came across another lioness near a watering hole. She had spotted a group on antelope, gazelles and giraffes coming her way. She became a statue, hiding low in the grass behind a dead tree. She was practically invisible and we would not know her location had we not seen her move there. The other animals approached, stalled, approached, and paused. They sensed danger, but couldn’t discern from which direction. The lioness then started to go on the prowl – moving gracefully and silently from her tree to a position on the same side of the watering hole as the potential prey. 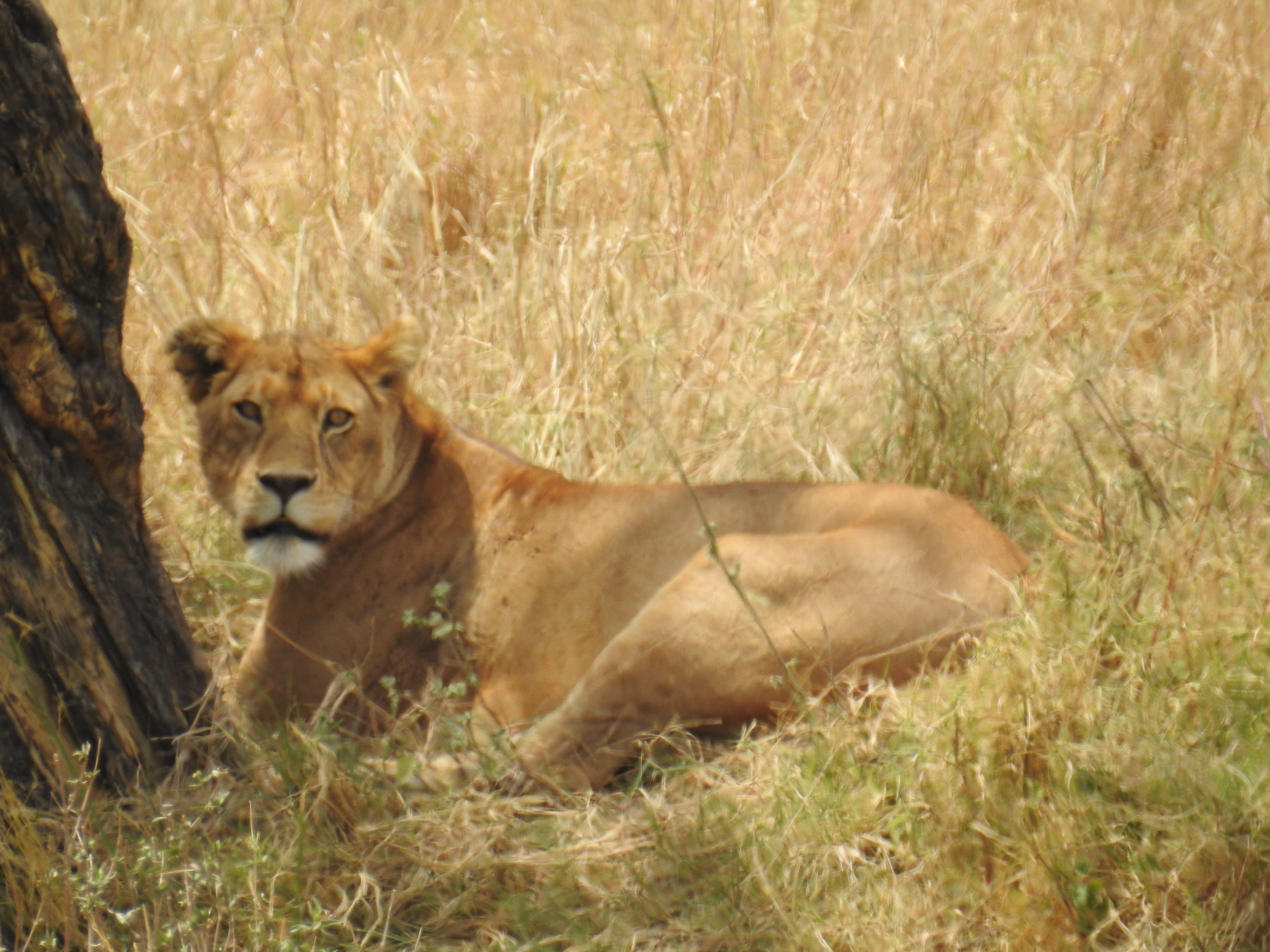 And she waited while very focused. 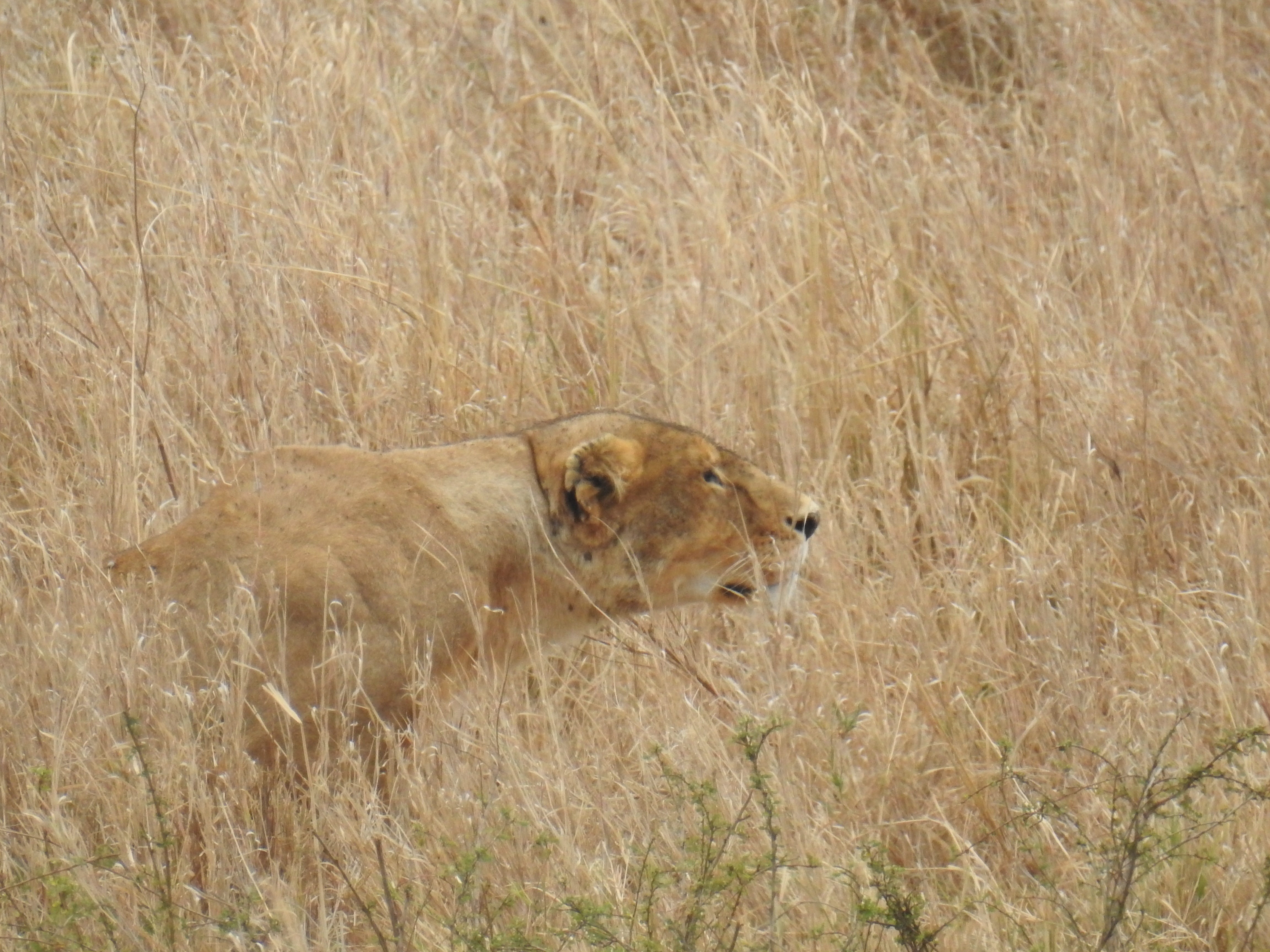 The gazelles were within 40 feet – close enough to sense a pounce, but actually too far for any real chance at success. The gazelles froze and started to retreat.

The lioness pounced and raced toward the gazelles, splashing through the water. She then stopped suddenly and redirected her attack. Walter, who has witnessed many a kill, commented that she looked surprised. She emerged a second later with a young gazelle in her mouth. Her strike had happened in an area in which we had not seen any other animals. Our only conclusion is that the young gazelle had been put there with instructions to remains completed immobile, like the gazelle we saw yesterday.

We assume that the young creature panicked and moved, thus attracting the lioness. [Note: I suspect you, like Susie and me, feel a tad bit of sadness at the passing of the young gazelle when it was just following parental orders. But I ask you, what parent chooses the watering hole as a hiding place? You might as well ask someone to be alone in Times Square.]

She emerged with her prey.

I was trying to take pictures of the lioness with her kill as Walter said “sit please”, started the engine as began to drive. I should admit that I was initially irritated because I was getting some good shots, but I underestimated our guide. While the other drivers were content to stay in place, Walter deduced where the lioness was going and drove us there immediately.

We were 15 feet from where she chose to feed. 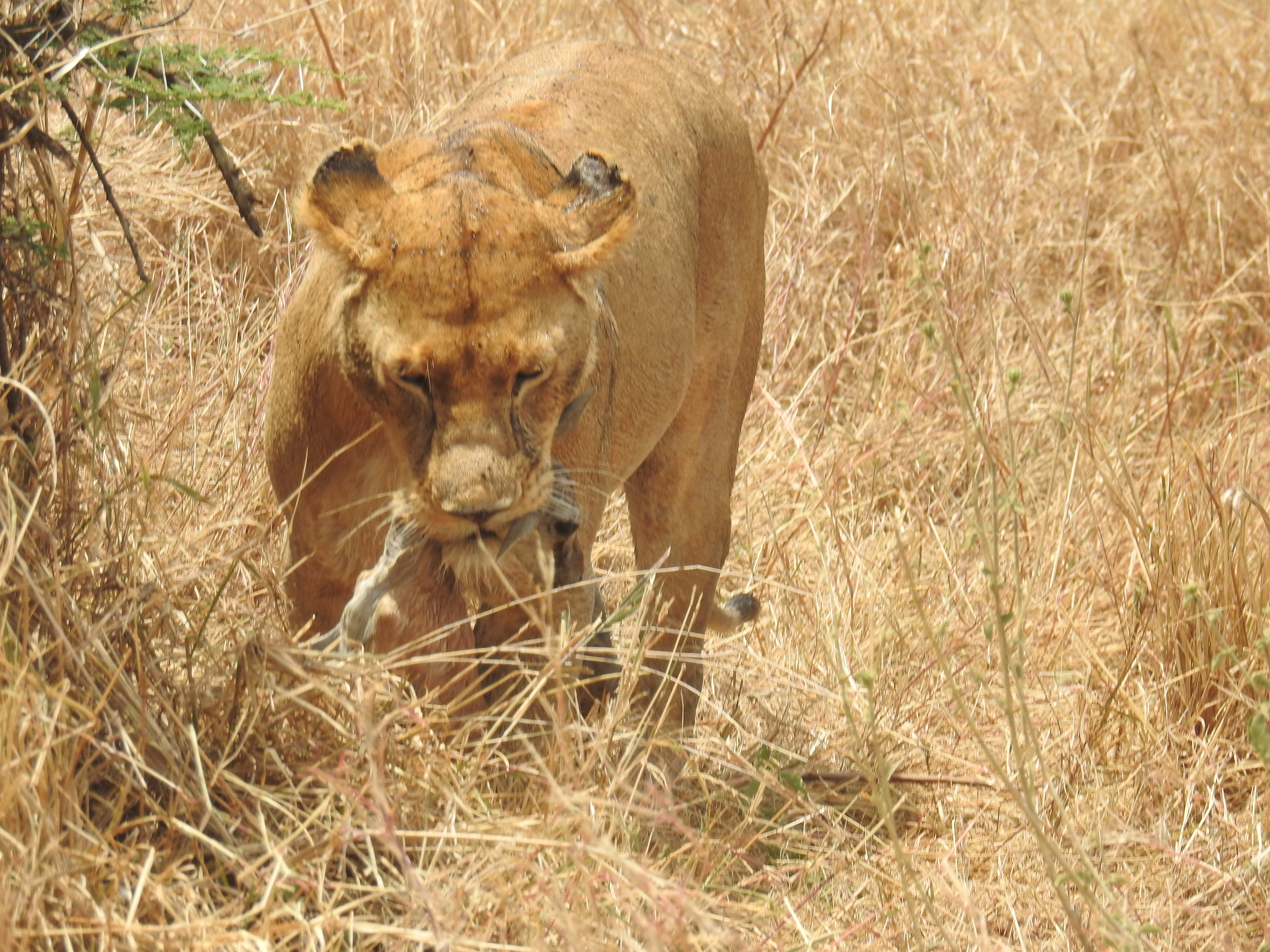 In that moment, I saw the lioness and Walter as similar. Both were agile and resourceful. Both had a singular goal and got it (food for the lioness, photos for Walter). And both were swift.

The similarities, however, did not end there. When the lioness arrived at her spot, she rested and then scanned the area for any potential competitors – other lions (particularly males) who might want to steal her kill.

As we watched from our epically good vantage point, the other safaris trucks arrived. I think there were 8-10 of them. That was not the issue. The issue was a rookie driver who drove between us and the lioness. This was a huge breach of protocol. First, safari drivers are quite considerate and consistently avoid impeding views. Second, he put them within 7 feet of the feeding lioness, which could disturb her. Both Walter and Susie called him out and he moved.

As this happened, I realized that Walter and the lioness were, in fact, exactly alike. Not only had they both used their wits to accomplish a goal, but also both needed to defend their victory from opportunistic competitors – be they rival lions or another Toyota Land Runner full of Europeans.

We would later come across a pair of lions (one male, one female) who had successfully hunted a wildebeest just moments earlier. We were also ridiculously close to her. To give you some perspective, in both cases, we could hear the cracking of bones as they ate. 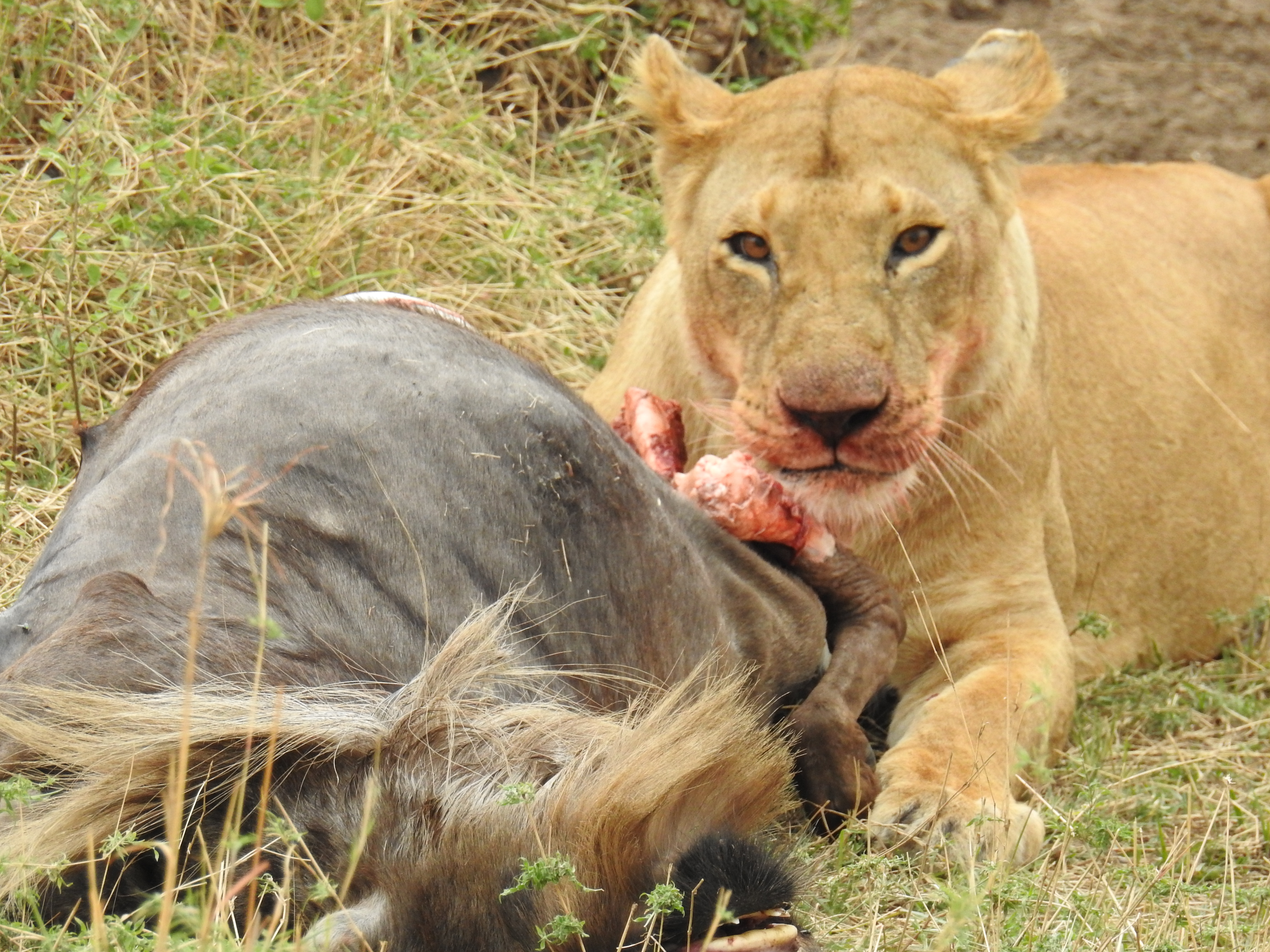 The Serengeti is so different from the world we strive to create. At camp, we endeavor to create a place where all differences are celebrated. The children that might be marginalized in school are loved and appreciated at camp.

But the wild has no tolerance for differences or hesitations. Kindness, mercy, love and tolerance are really modern luxuries. On the plains of Tanzania, the only rule is to eat and avoid being eaten.

I vastly prefer our world, but I admire the purity of the wild.

I guess that makes me like Marlin Perkins – I admire the struggle without diving into it.

I guess ole Marlin was smarter than I thought.