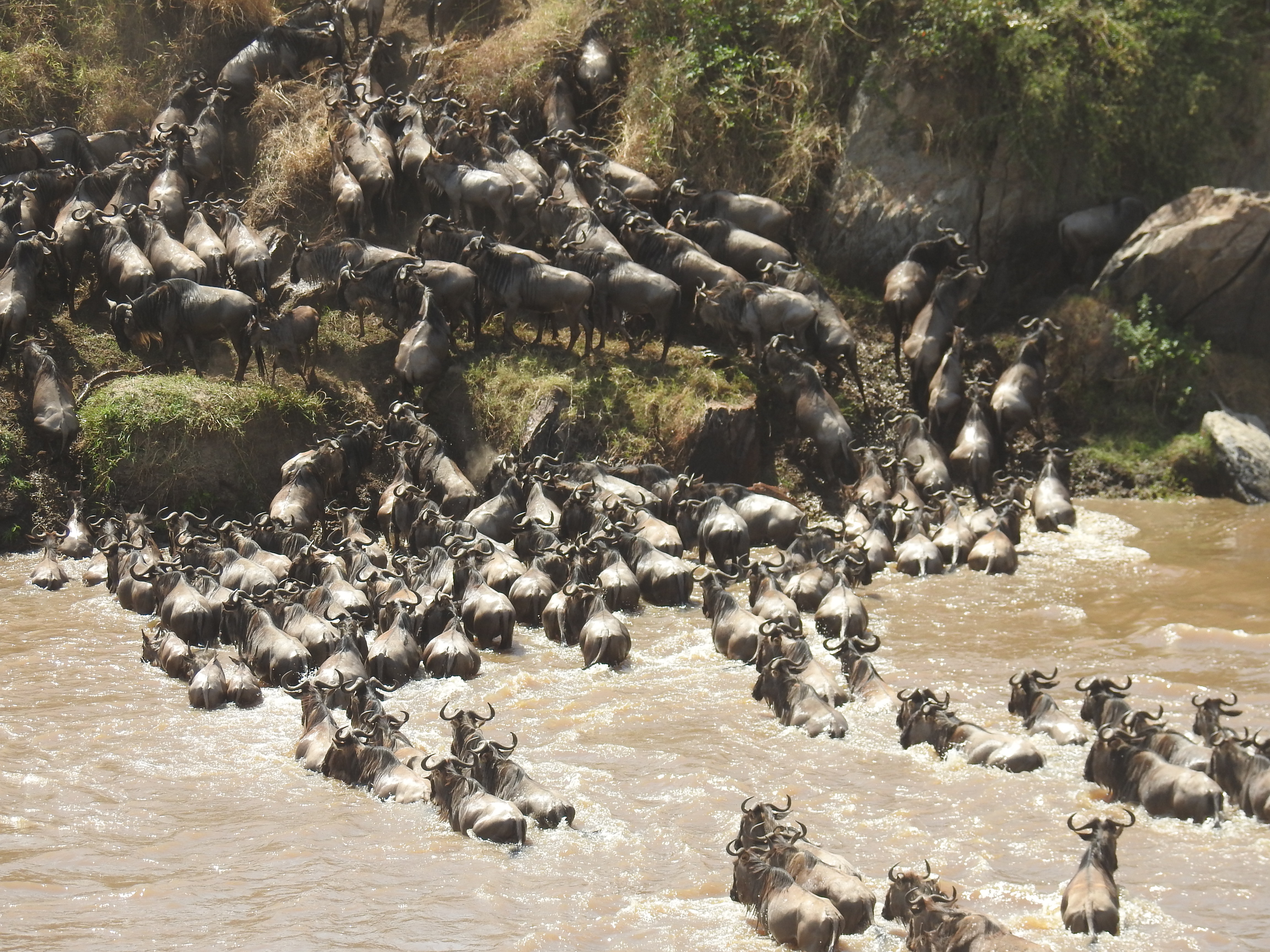 Each year, 1.5 million wildebeests migrate over 1,000 miles round trip through Central Africa in search of grazing fields. The migration is considered one of the animal wonders of the world.

The migration includes the crossing of several rivers, including the Mara River.

We take river crossings for granted, but we live in a world where industrious people have built bridges and tunnels that make crossings little more than speed bumps in our travels.

If, however, you are an oddly designed 500-pound gazing animal, a river crossing becomes a life or death endeavor – especially if that river has a crocodiles, currents and steep banks. Add to all of that the fact that you are not smart. In fact, you are highly prone to stampeding and panicking.

Before we go any further, please let me explain what I mean by “oddly designed animal”. Walter calls the wildebeest a “spare parts animal”. It has 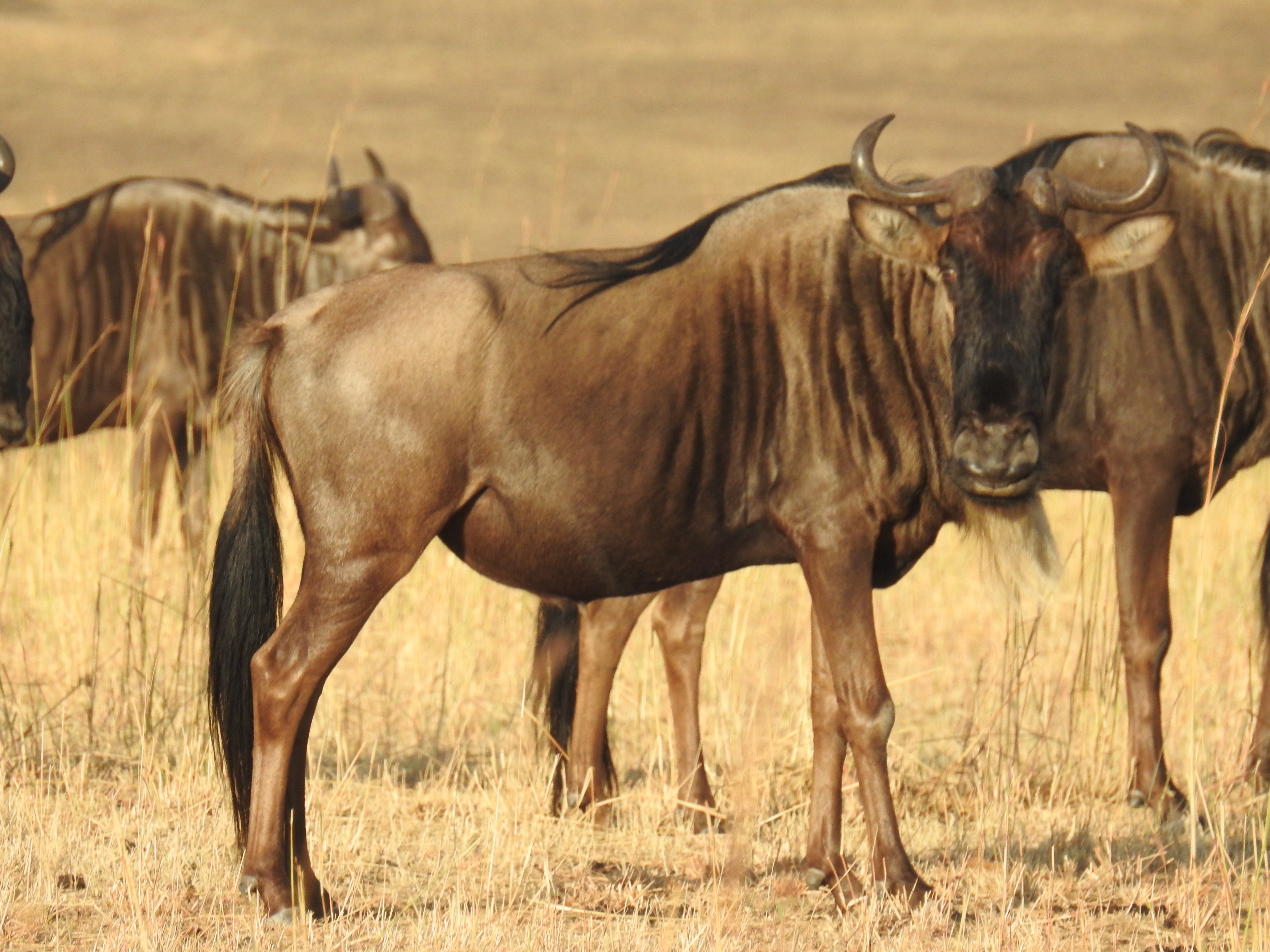 The river crossing really starts as an effort to drink some water. The first few wildebeests go to the edge and start to drink, but others are waiting behind for their turn. Take a moment to picture yourself in a rush waiting in the supermarket aisle behind an enthusiastic couponer. You know that feeling of impatience that makes you want to push forward? You and I resist this impulse. But now imagine that there are 1000 people in the line with you . . . and you are stupid herd animal.

You get impatient. You press forward. Your water-stop has become a river crossing. 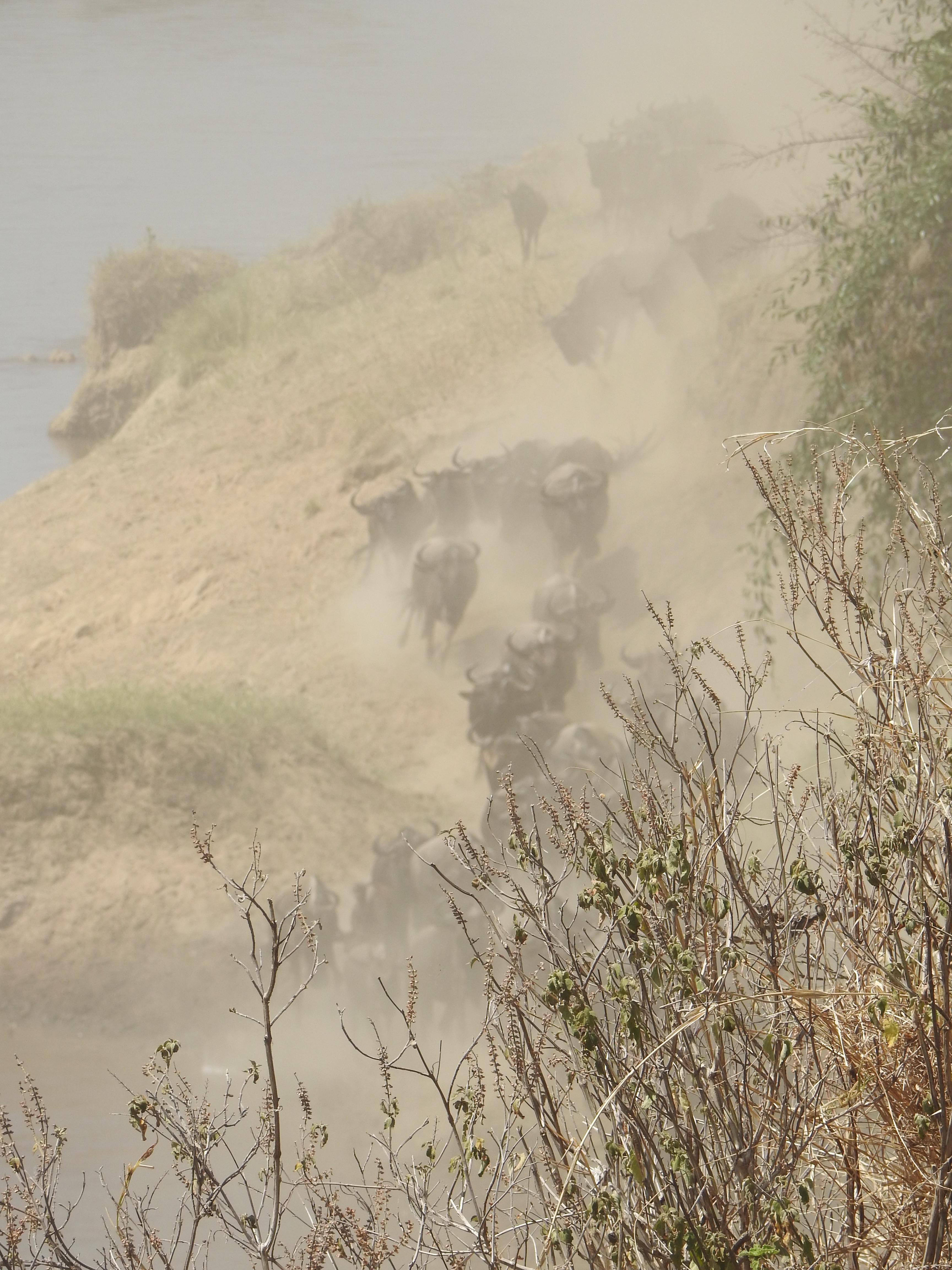 They cross and they crowd. They pile up in the water and become terribly dense on the opposite side. They then attempt to scale the shore. These animals are designed to run and graze, not extract themselves from a flowing river onto a bank. Their long legs flail and strive to make purchase on the shore. Some make it easily. Others struggle. Others start well enough and then lose their footing and fall backwards.

Oddly enough, they seem to select the egress with the steepest slope, as if gravity suddenly ceased to exist while they were swimming. This creates yet another problem as they ascend. While I am not a wildebeest, I am assuming that you lose popularity in the herd when you create a domino effect that sends several of your friends cascading down the shore and back into the river.

One wildebeest skidded back and fell awkwardly. She effectively blocked the route she fell in and the other animals walked around her. She did not get up while we watched, so we fear she broke a leg and was a fatality of the crossing. 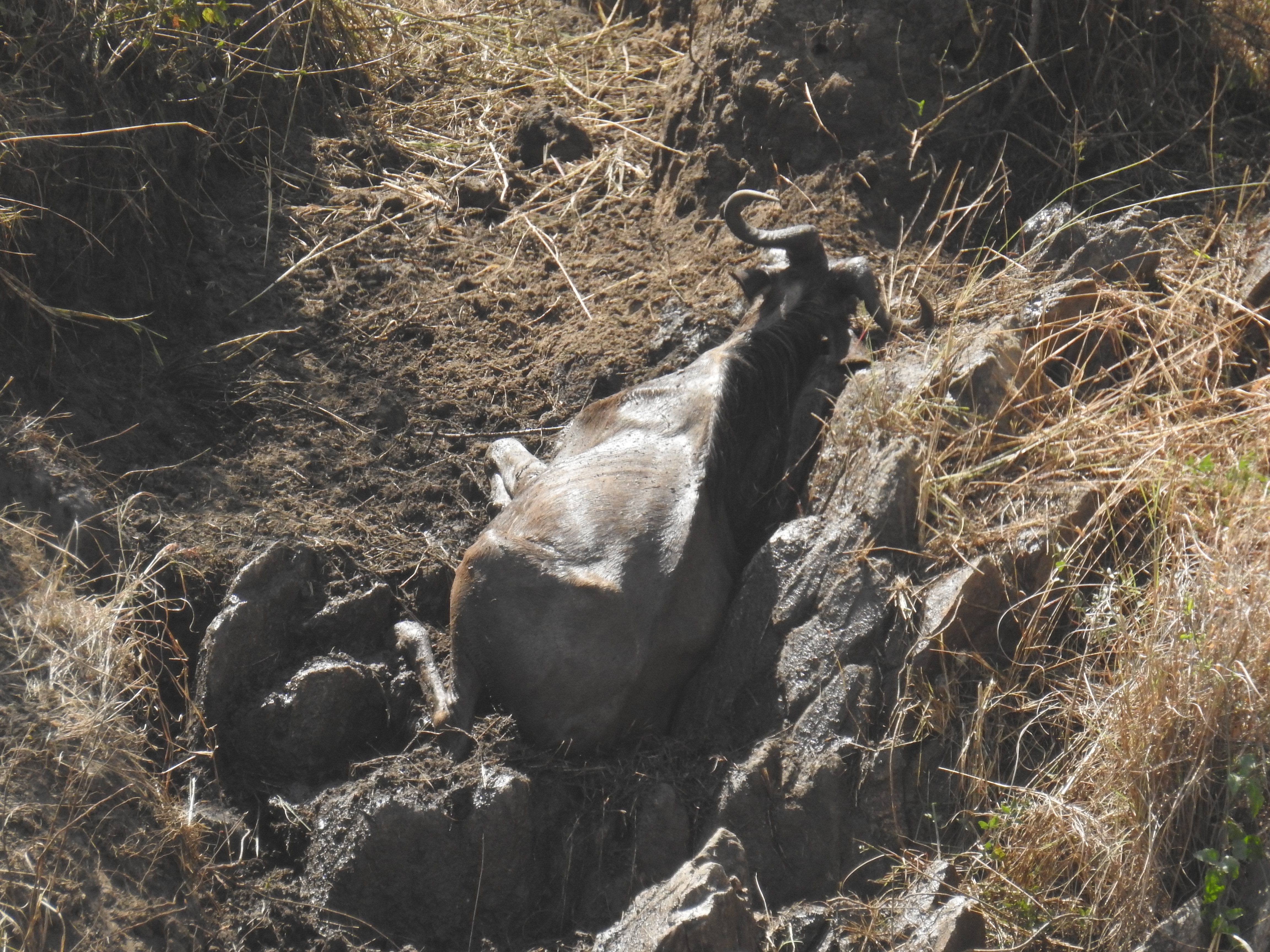 Oddly enough, we think she was the only one of the 1000+ animals we watched that did not survive. One juvenile crossed, failed to get on shore, swam back to our side and then swam over again. Upon her second arrival, she found a way onto the shore and rejoined the herd. 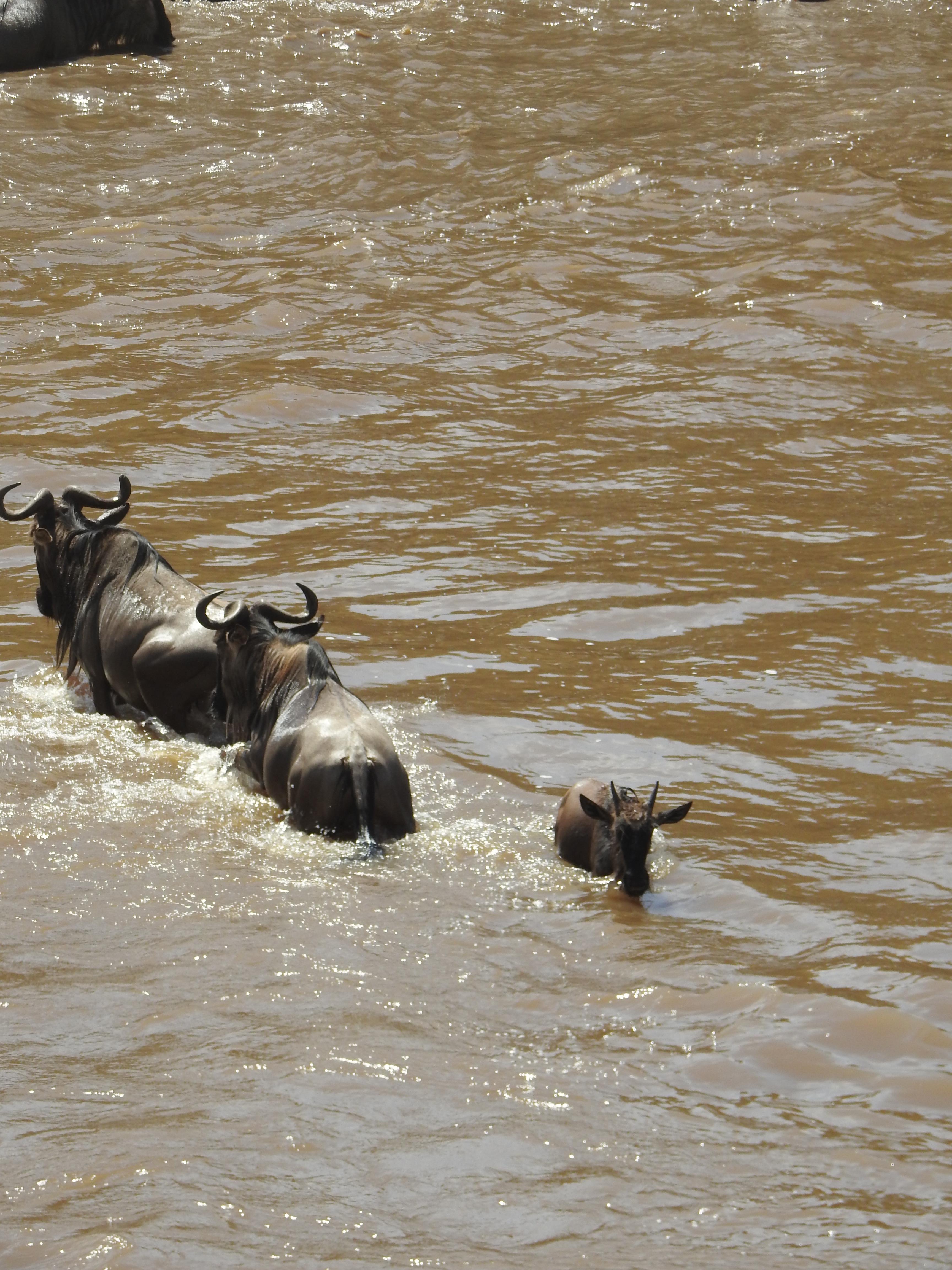 You’ve got it buddy!

Two other full-grown wildebeests also failed to mount the far shore and chose to swim back to our side, but they stayed. We assume they would attempt the crossing again once they regained their strength.

We, however, did not see any crocodiles prey on the wildebeests.

I must admit that this was a mild disappointment. I know that sounds horrible, but I feel a need to admit that we hoped to see nature in its most extreme. Two days ago, we watched the lioness catch the baby gazelle and later we came across a pair of lions soon after taking down a wildebeest and watched as one of them fed. Earlier this week, we listened to a hyena crushing the bones of a small antelope it was eating.

Nature is rough. I am glad that humans are generally kinder than the animals of the Serengeti, but we are fascinated with seeing how the “circle of life” works.

Walter had described the sight of a 20+ foot crocodile taking down a wildebeest. That sounded like something fascinating, if not brutal, to witness.

As we were watching the crossing and scanning for crocs, Terrill reminded me of the other times we had bided our time watching a lioness on the prowl or a bird hunting for bugs. As we watched the crossing and wondered about the crocodiles, she mused, “I never knew how much of a safaris is waiting and rooting for death.”

Ouch, but there is some truth to that.

To our credit, we were all enthusiastically rooting for the juvenile to cross and reunite with his mother. Also, we were not rooting against any specific wildebeest. We just hoped to see something rare.

The one other aspect of the crossing worth mentioning was the other safari groups. Most of them, like us, had been waiting for 4-5 hours for the crossing to begin. While the waiting is long, the crossing is short – 10 minutes at most. No one knows exactly where the crossing will actually occur since there are multiple potential sites. Once the wildebeests started to cross, the trucks all communicated with each other and a mad vehicular dash ensued. Our stampede was just slightly more tame than that of the actual herd animals. 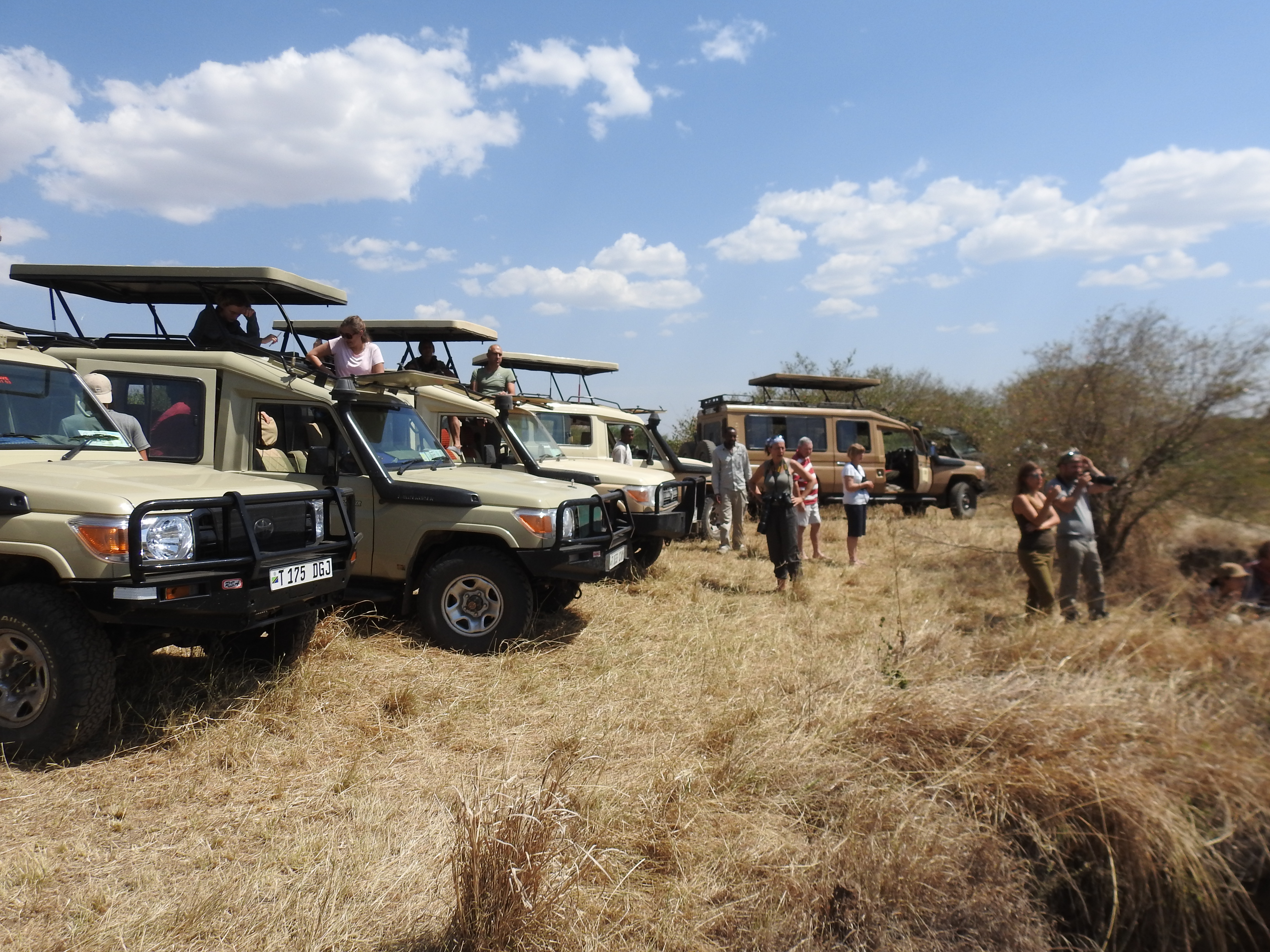 As you can see, we were gathered in tight packs like the wildebeests, but at least we remained dry.