Hunting with the Tribe 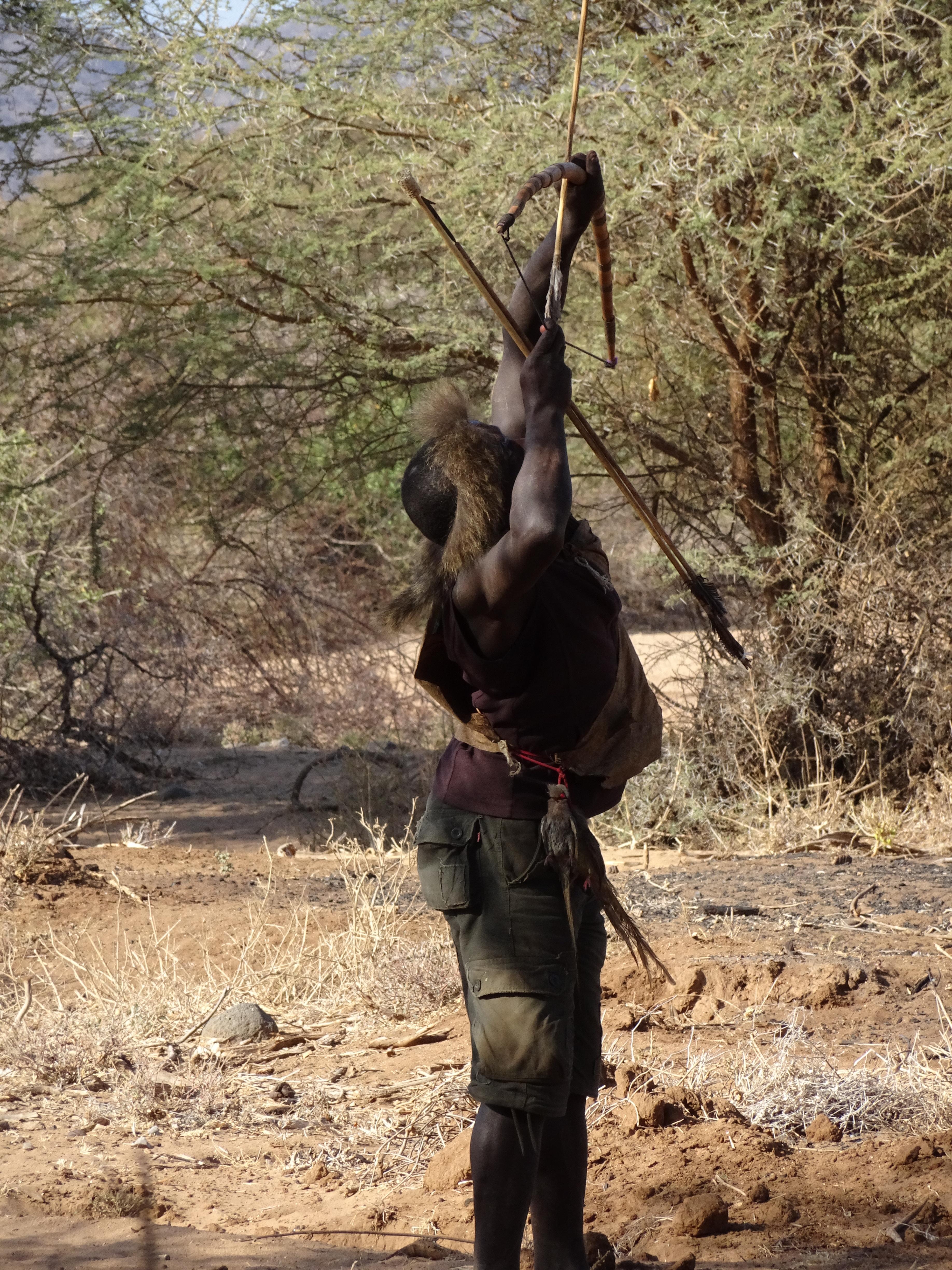 Yesterday, I described the first of three visits we made to indigenous tribes: the famous Maasai.

Today, the blog will share our experiences visiting two other tribes: the Hadzabe and the Datoga.

The Hadzabe are the least sophisticated of the Tanzanian tribes. They have not meaningfully changed their lifestyle in hundreds of years. A nomadic tribe of hunters, they build tiny huts and frequently move. They have no modern medicine and extremely high mortality rates. Our guide estimated that fewer than half of their children would reach the age of 15. In fact, he said that 70% would not. Frankly, this seems like a completely crazy number to me, so I am reducing his estimate. Lets just say that the death of children is something that is common in this tribe.

Our experience with them was quite unusual. Rather than simply watch as they demonstrated their traditions and skills, we joined a group of three archers on a hunting trip.

The day started WAY too early for our teens. Heck, waking at 5AM is too early even for an old guy like me. We had to get to their village before sunrise for introductions and the hunt.

As we drove in, we noticed the return of the Boabob trees. We had seen them earlier, but not in the last week. They grow in extremely arid areas and survive by sending shallow roots out for great distances. They also only have leaves for a limited time each year to conserve energy. 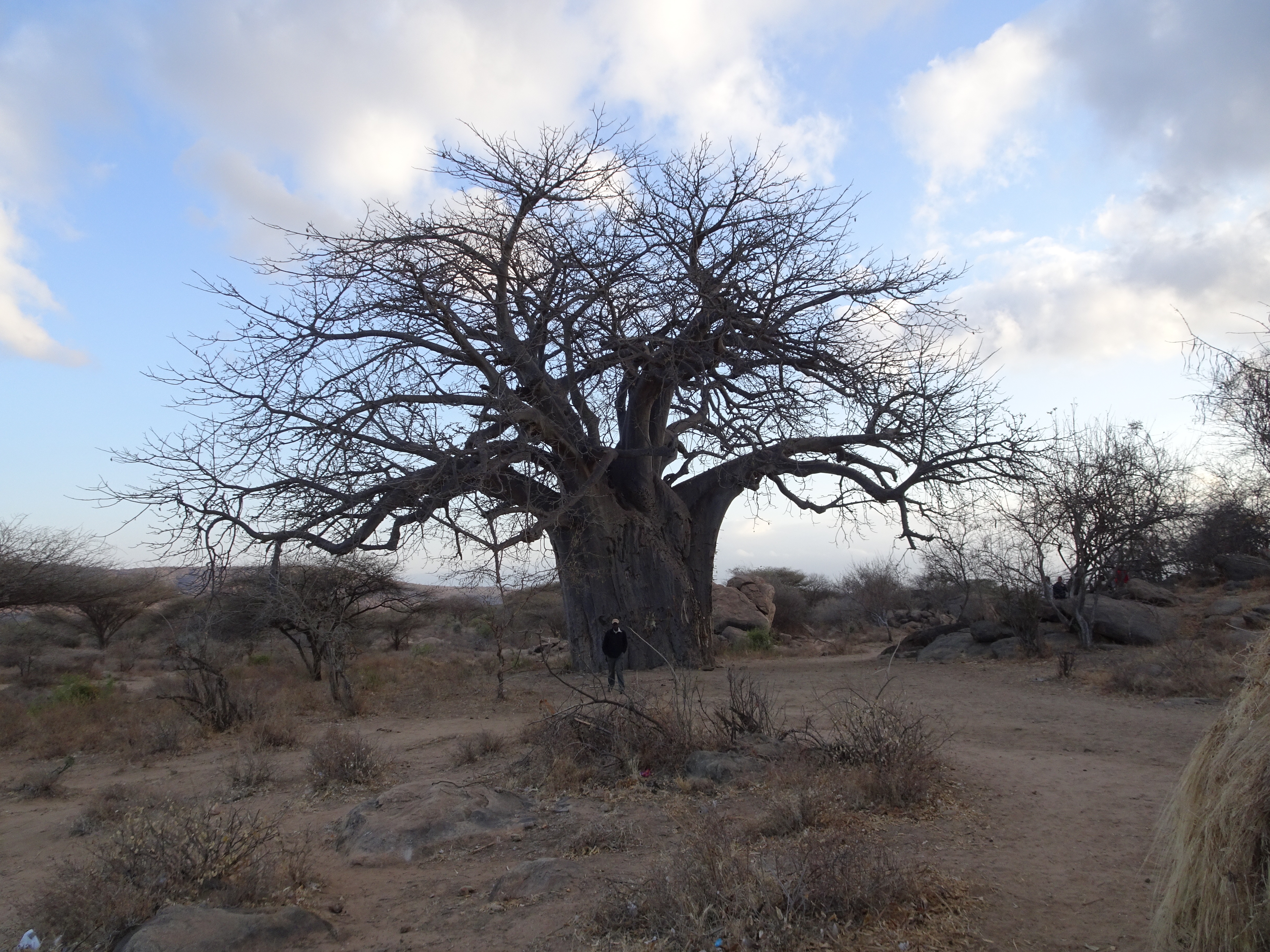 The reappearance of these trees also underlined the fact that we were in a very difficult climate. Wildlife was scarce. In fact, apart from livestock and a pet dog, we saw almost no mammals at all.

I imagined the challenges of feeding a tribe on what I could personally hunt in this environment. As a camper, I was an excellent archer, but let me go on record that if Team Baskin required me to bow-hunt for food in this desert, we would go hungry.

Once we arrived at their camp, we saw the men around two fires. They were warming themselves (it was around 55 degrees at sunrise) and discussing their day. 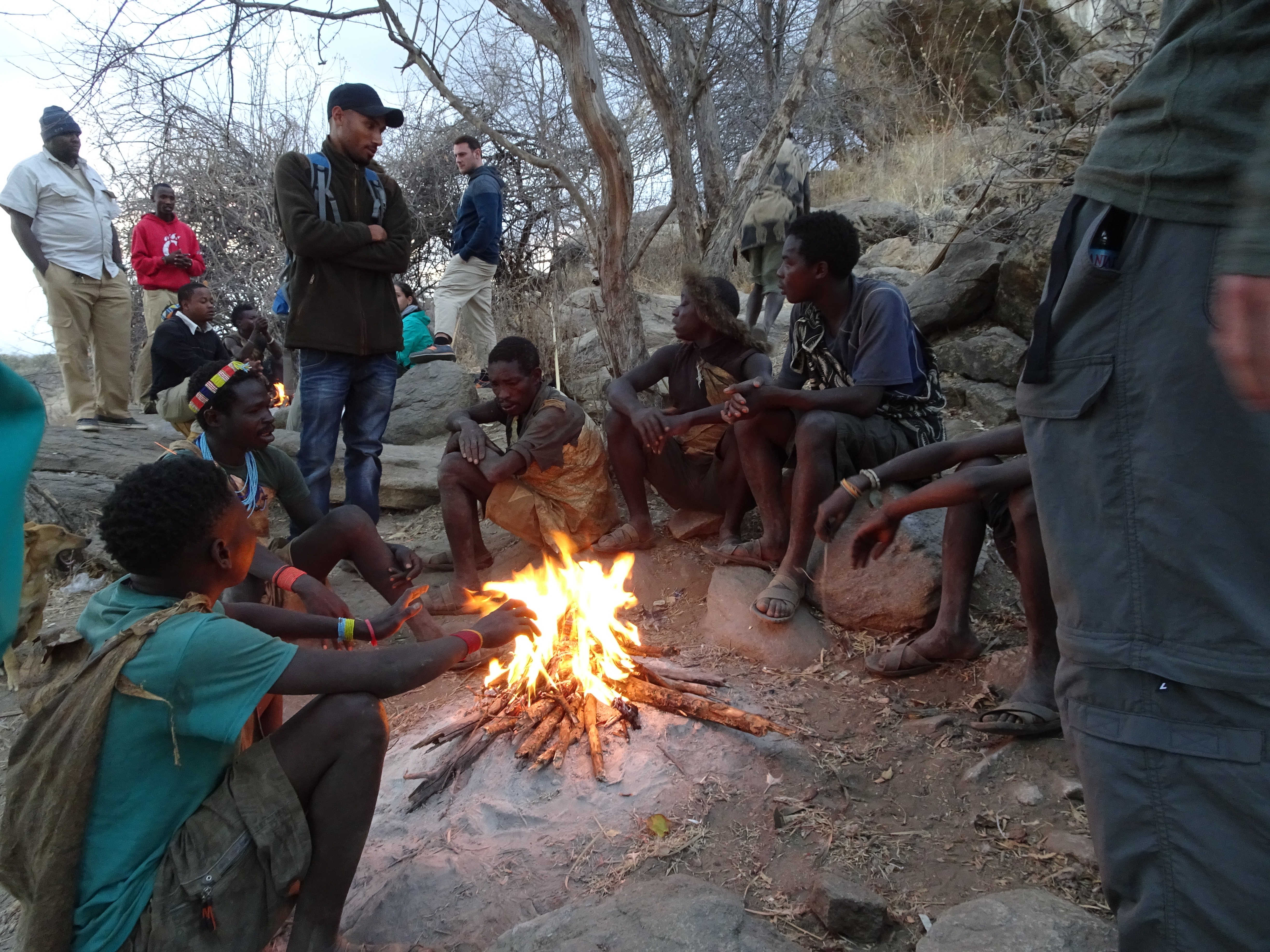 Actually, I have no idea what they were discussing because I do not speak their language, which is full of tongue clicks as well as vowels and consonants. If you have ever seen the movie “The Gods Must Be Crazy”, that is the type of tribe and language we were experiencing – very aboriginal and primitive.

We had a guide named Joseph who had grown up in another tribe that traded with the Hadzabe, so he had learned their language. He conducted the introductions and they welcomed us.

I was particularly fascinated with a young man (perhaps 20-22) who wore baboon fur around his face. He was clearly the leader of this group and carried himself in such a manner. 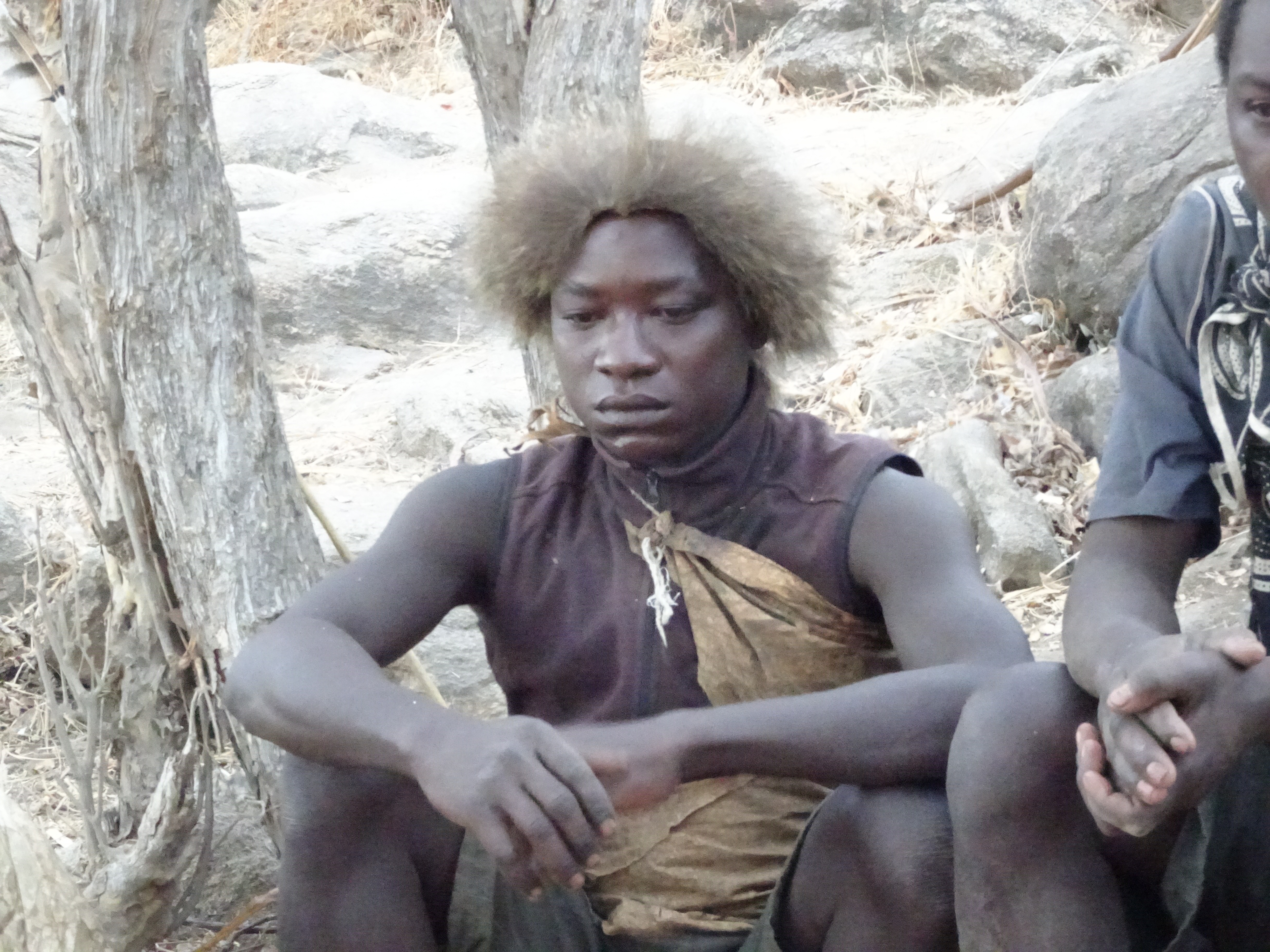 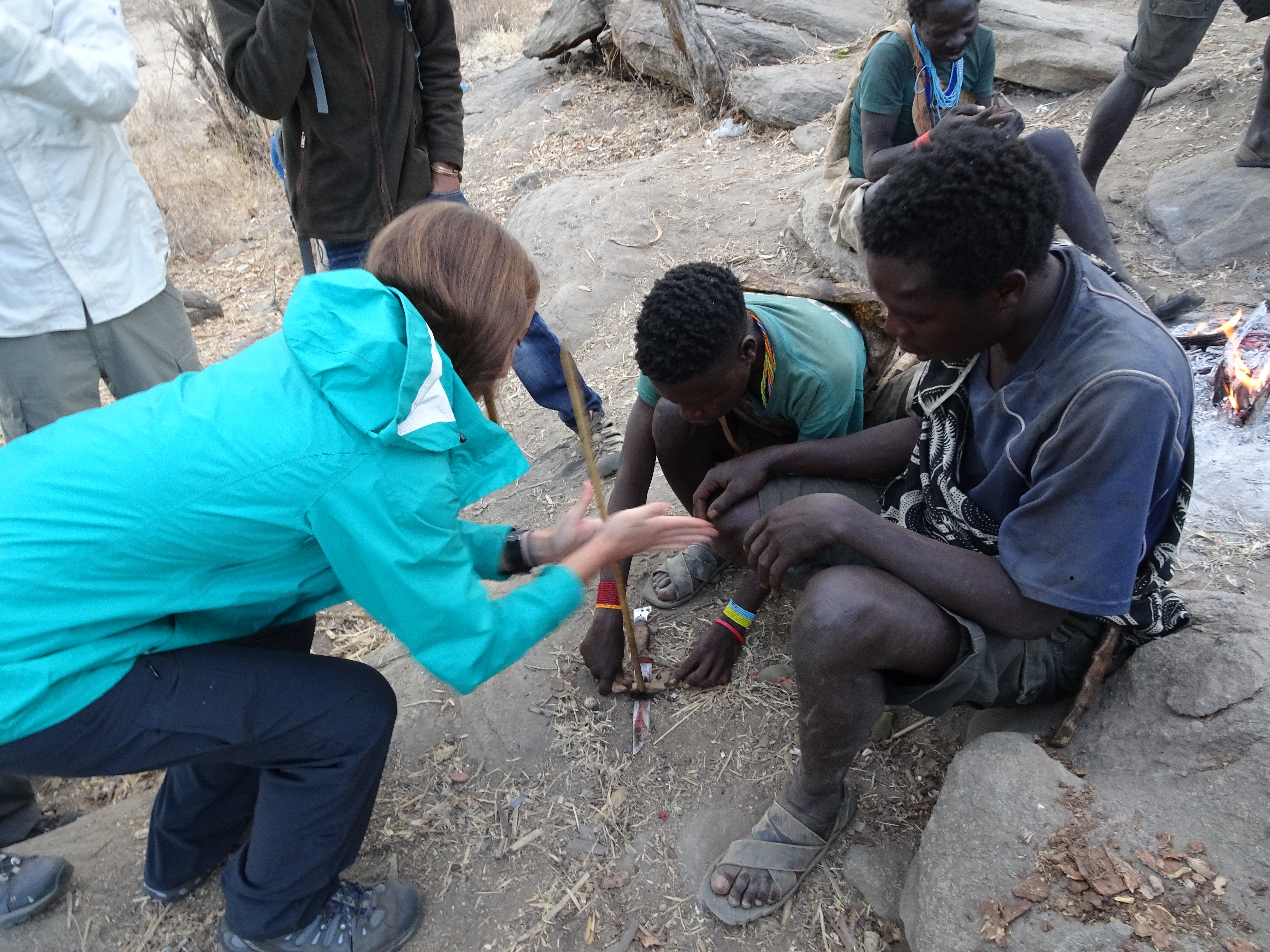 Following the fire-starting (which was actually really cool to do), they showed us their weapons. The bow was extremely rigid and could not be pulled as far back as European bows. 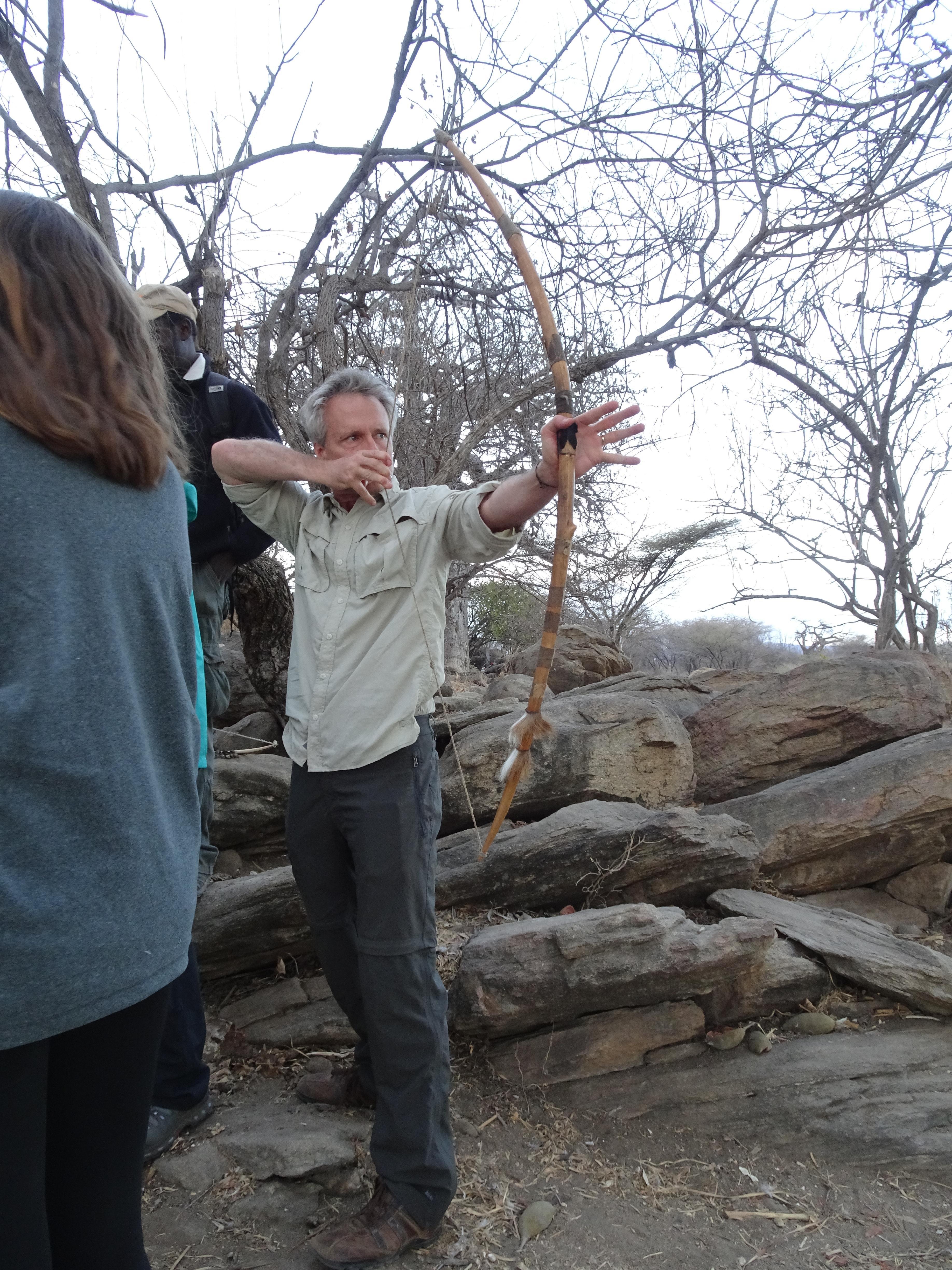 They also had an interesting array of arrows: 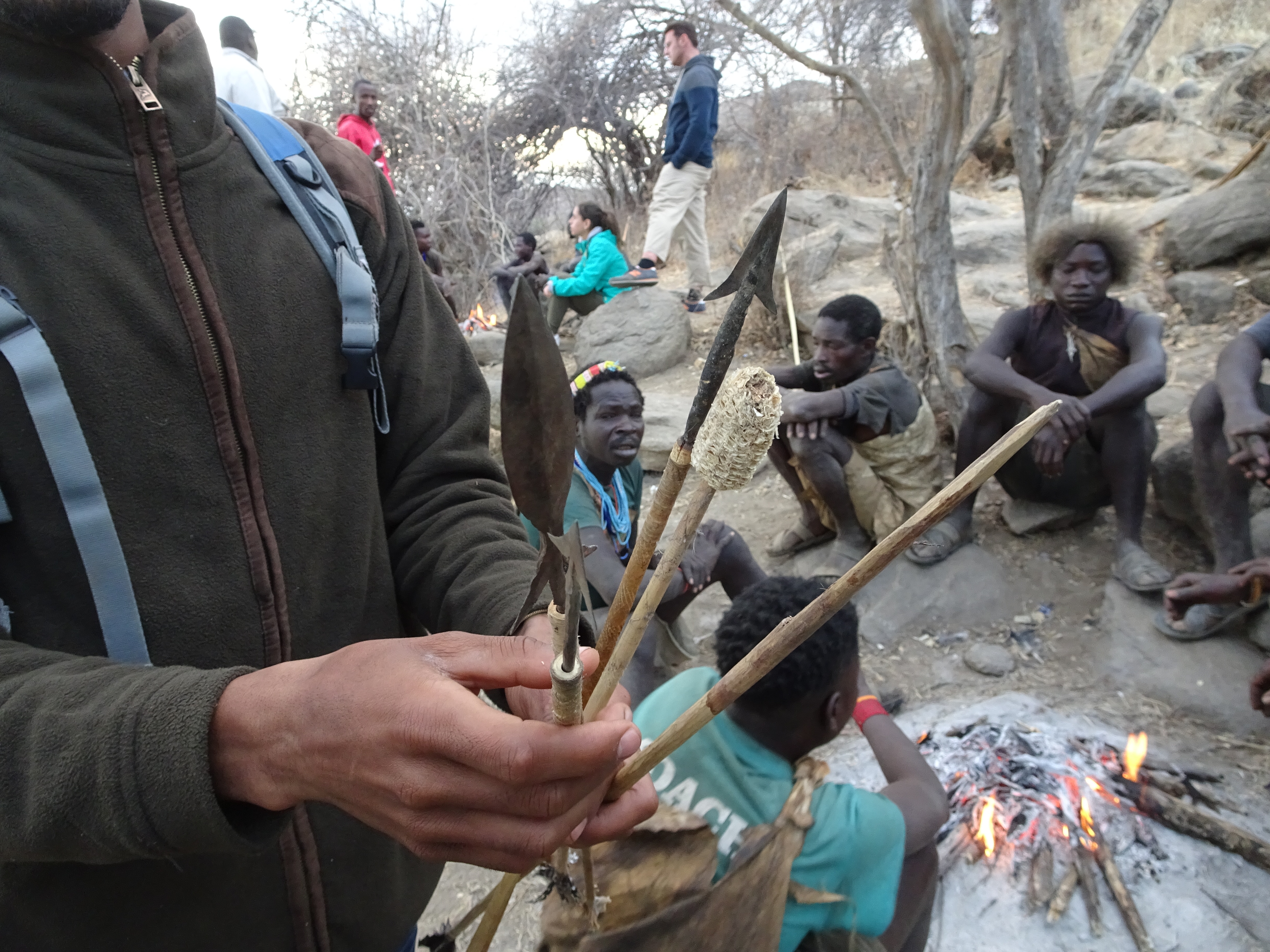 After our briefing, we were on the hunt.

OK, we were not really joining them on a hunt, we were observing them as they hunted. Since we are not the most silent walkers in the world, they put us with a team intent on hunting birds. The birds do not leave when you step on a twig, so we could be there and not affect their effectiveness.

Almost immediately, we saw the hunter with the baboon fur get a bird, but also get his arrow stuck in the tree. This led to the second most typical activity of a Hadzabe hunt (walking is #1): throwing rocks and sticks into trees to liberate stuck arrows. Arrows are valuable, so when they get stuck, the hunters must retrieve them. This is painstaking, but necessary work. 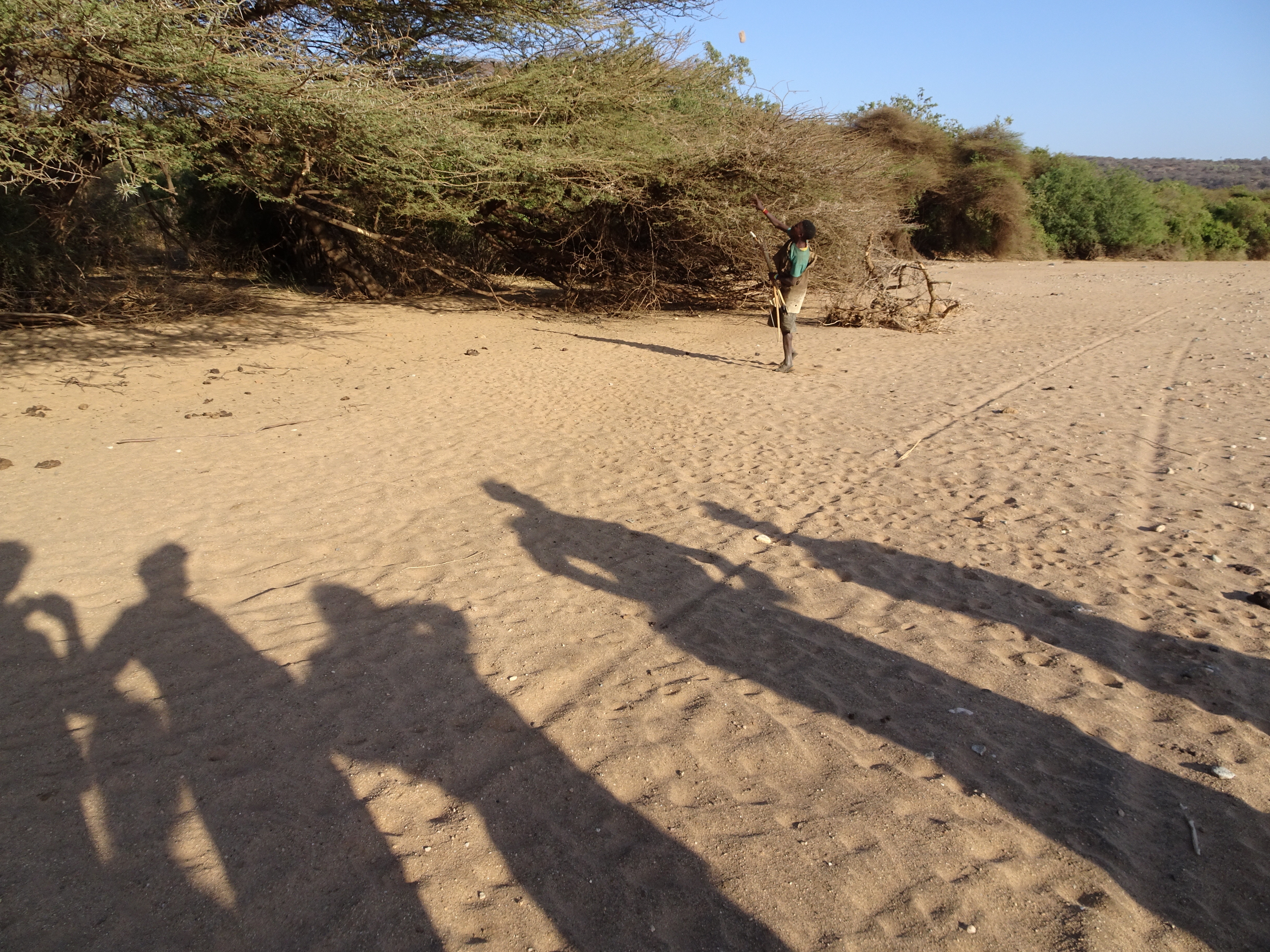 We were out for 2.5 hours and probably covered around 5 miles walking and jogging through the bush. While that does not sound like a ton of terrain, please realize that the plants in the bush are as tough as these people. All plants are thorny and most have wickedly impressive thorns. We all incurred scratches to flesh and clothing.

[Note: on our hunt, we smelled and saw smoke. Walter led us to a mound of dirt that was smoldering and explained, “The Hadzabe make charcoal. They put wood in piles using a specific pattern. They then cover it with dirt, create a ventilation channel through the mound and set the wood on fire. It burns and creates charcoal.” Apparently, charcoal is the main product they used for bartering.]

Our hunting team caught three birds and lost or broke 2 arrows. When we returned, they shared the birds with us, cooking them on their campfires (gamy, but good). The leader then shared a comment with Joseph that delighted Susie: “this is a good group. They kept up the whole time. Very unusual.” The kids took this praise as empty, but us more mature folk were quite pleased with ourselves.

We then spent some time with the women and children and bought some of their crafts.

It was an odd experience. As I mentioned in yesterday’s blog, I could not help but realize that our observations and interactions would be changing these people. One of our hunters was wearing an impala skin (very traditional) over a t-shirt that said “coach” in English (while I am not an expert in Hadzabe culture, I think green t-shirts are not traditional attire). 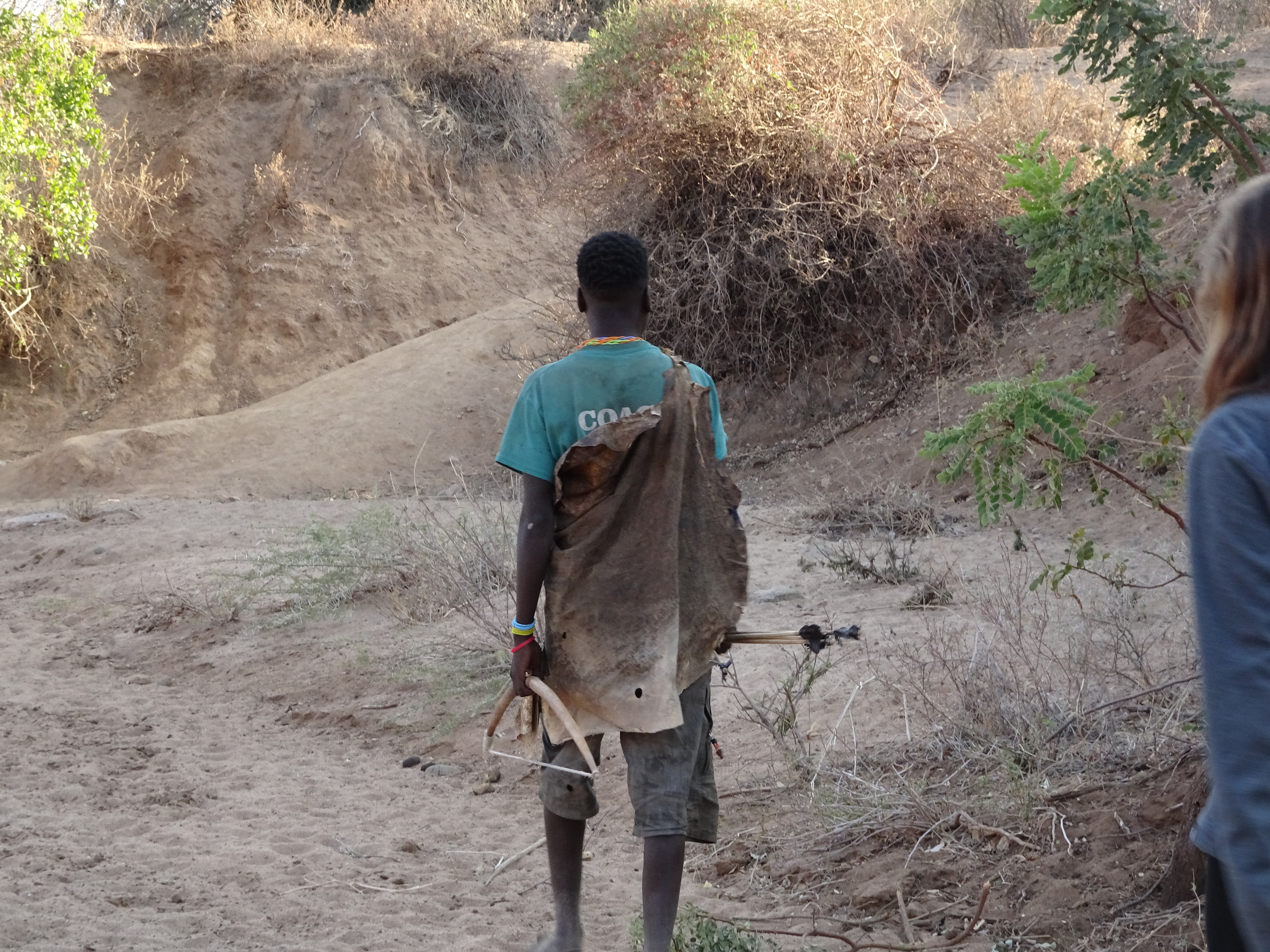 Our leader might have had a baboon hat, but he also wore cargo shorts.

Part of me bemoaned the fact that we would change their customs, but I also know that modernization will bring reduced infant mortality. It is odd to be a witness to the twilight of a culture.

After the hunt, we went to the Datoga village.

Here we met the tribe, saw how they made corn meal (really fun) and enjoyed a demonstration of their blacksmithing skills. 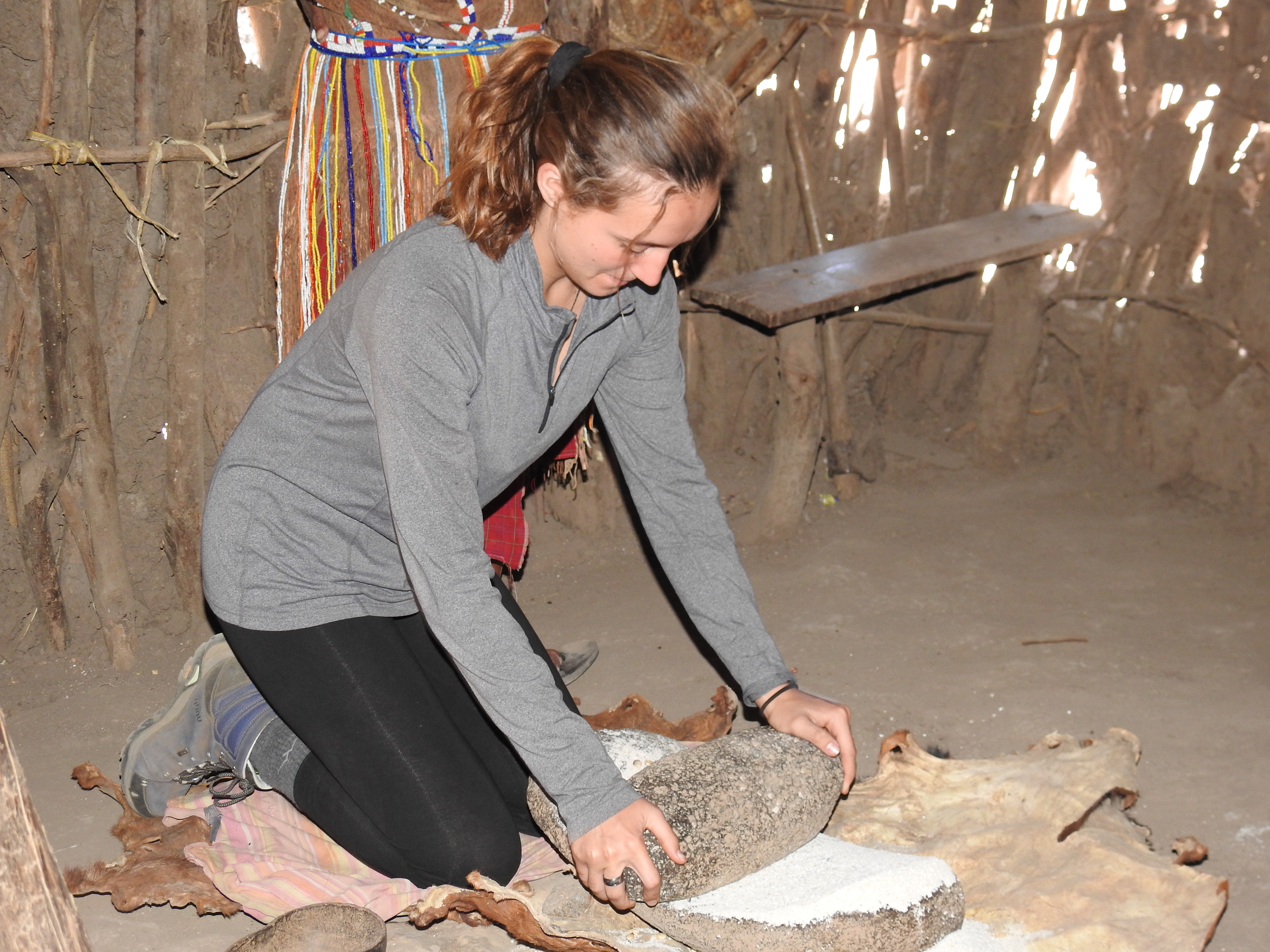 I personally found this entire process fascinating. They built a fire with charcoal that they would super-heat using bellows. Their bellows looked like they had been fashioned from sacks. They made ingots of metal (copper, aluminum and brass) by recycling scrap metal. They had a copper plumbing fixture (part of a valve housing) that they were breaking into pieces, melting and forming into small bars. They then fashion these mini-ingots into arrowheads and jewelry. Nothing could be farther from the precise production process of the west. These people were making items that looked like this: 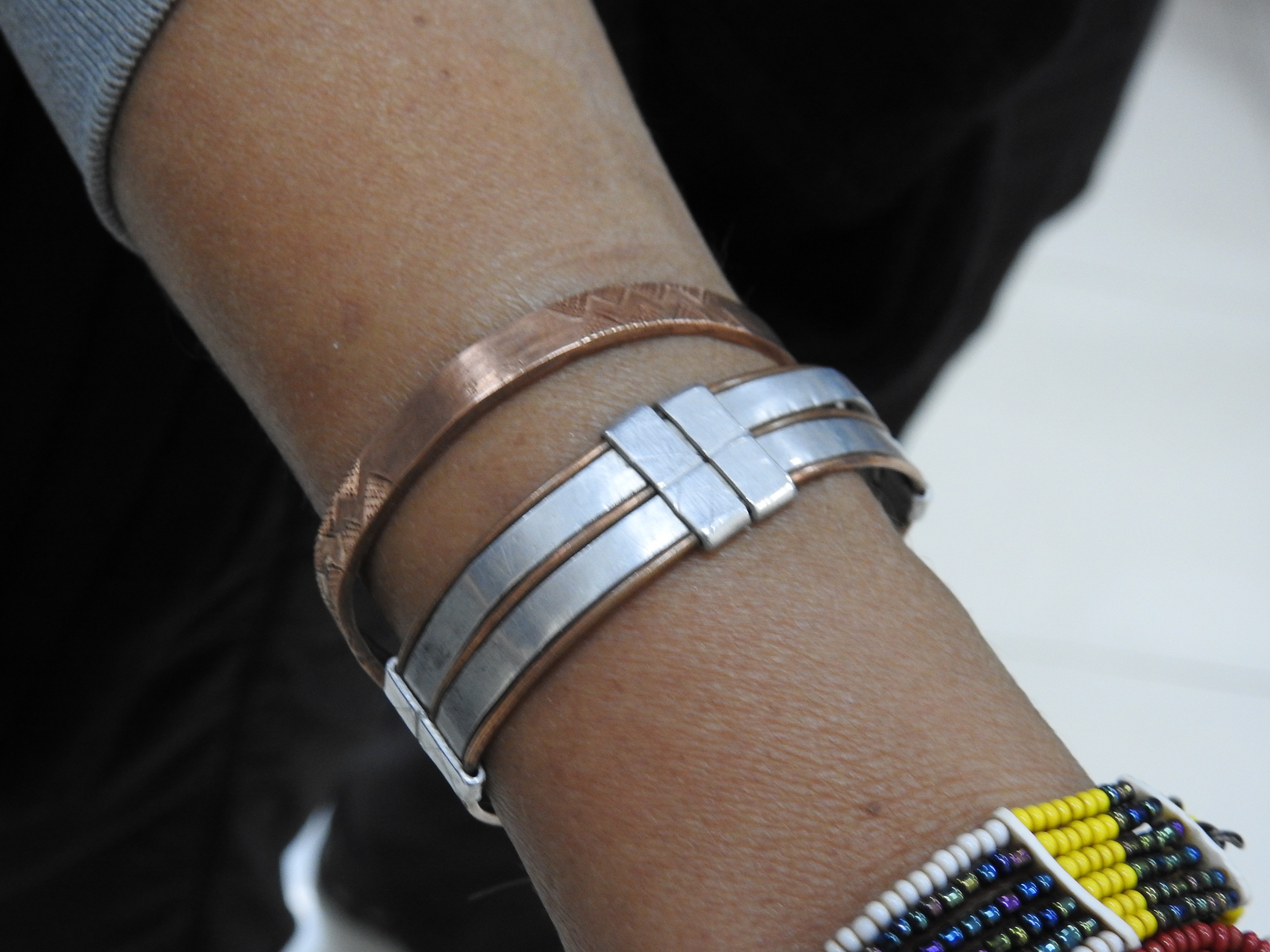 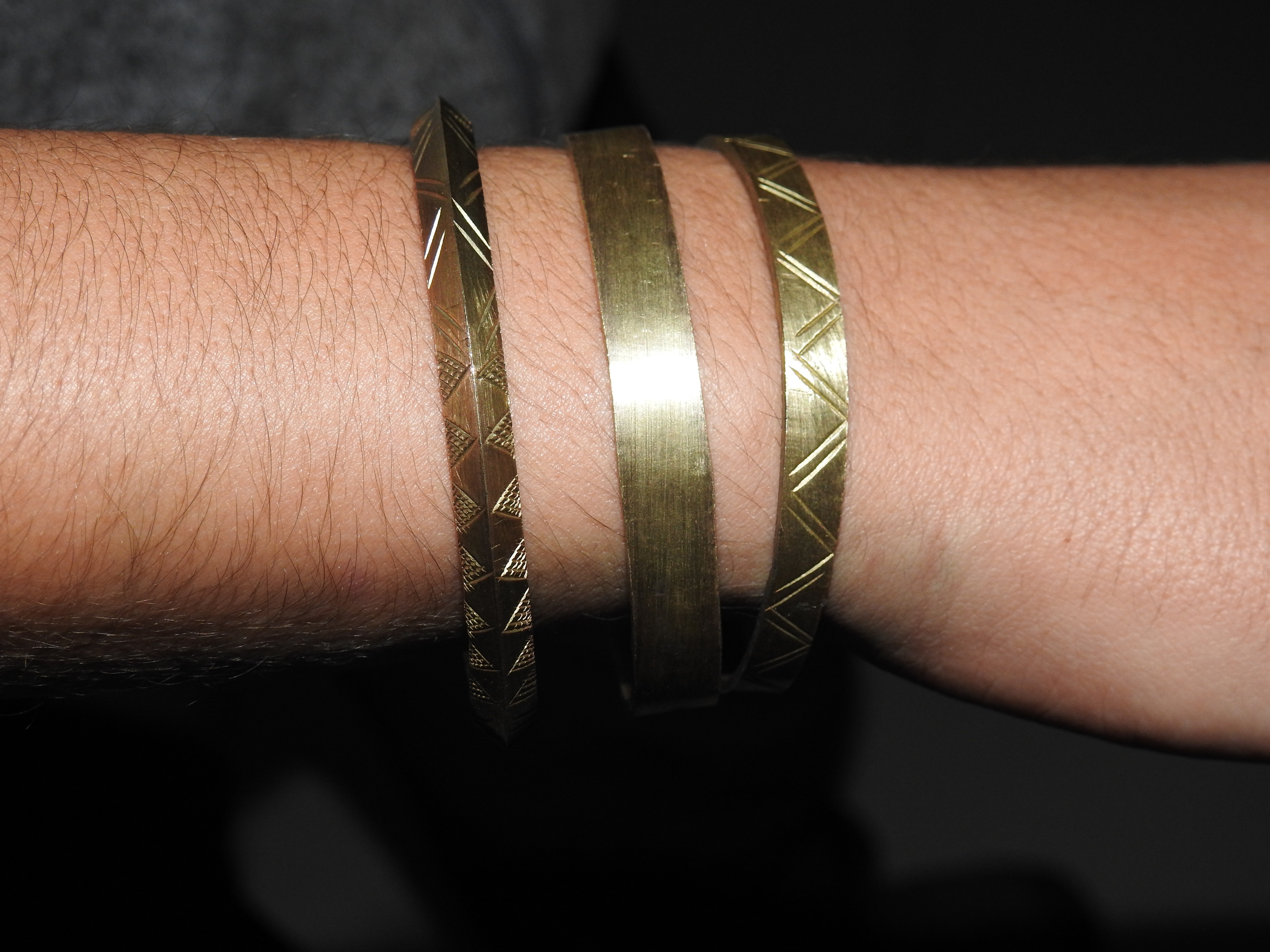 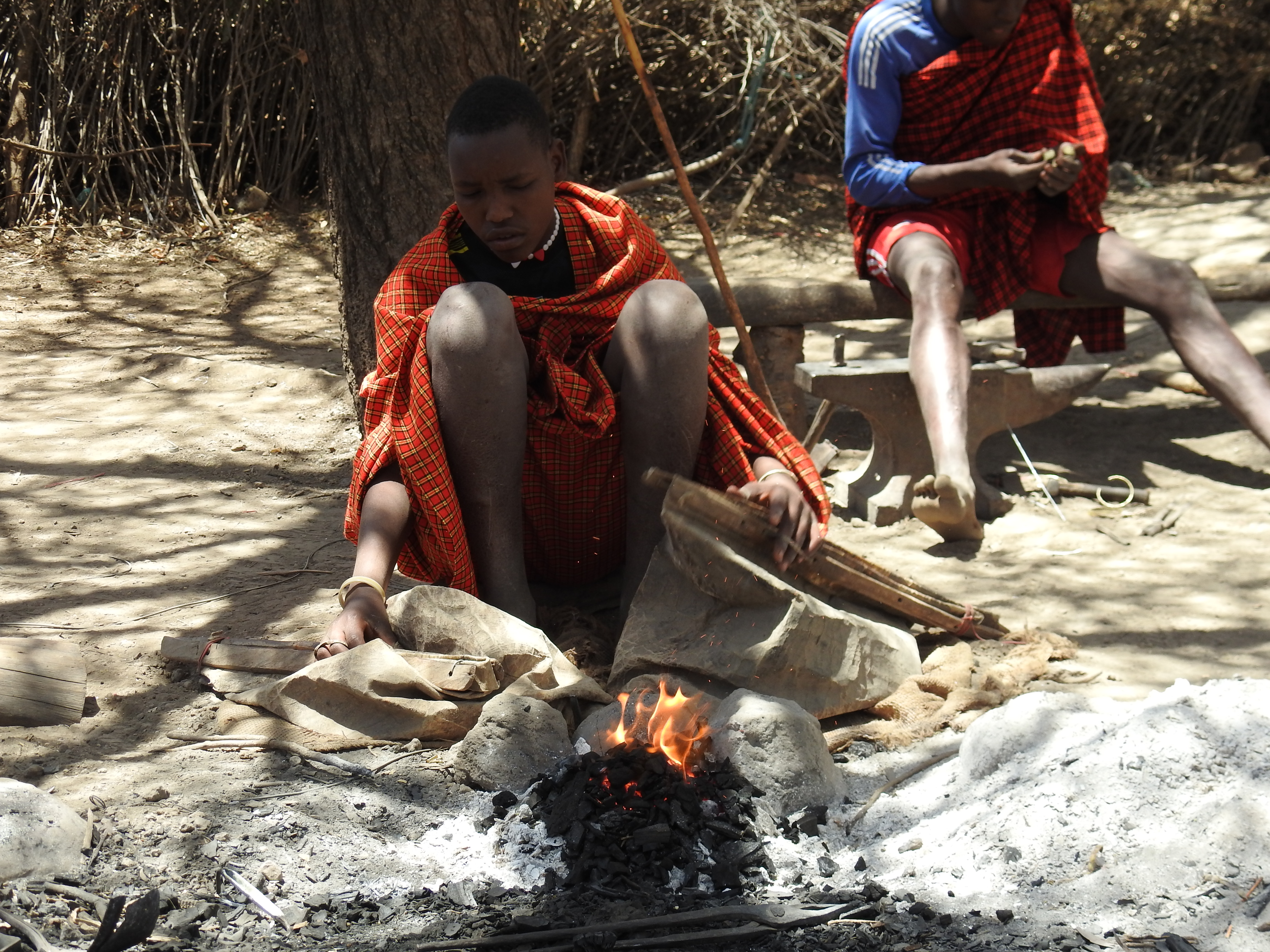 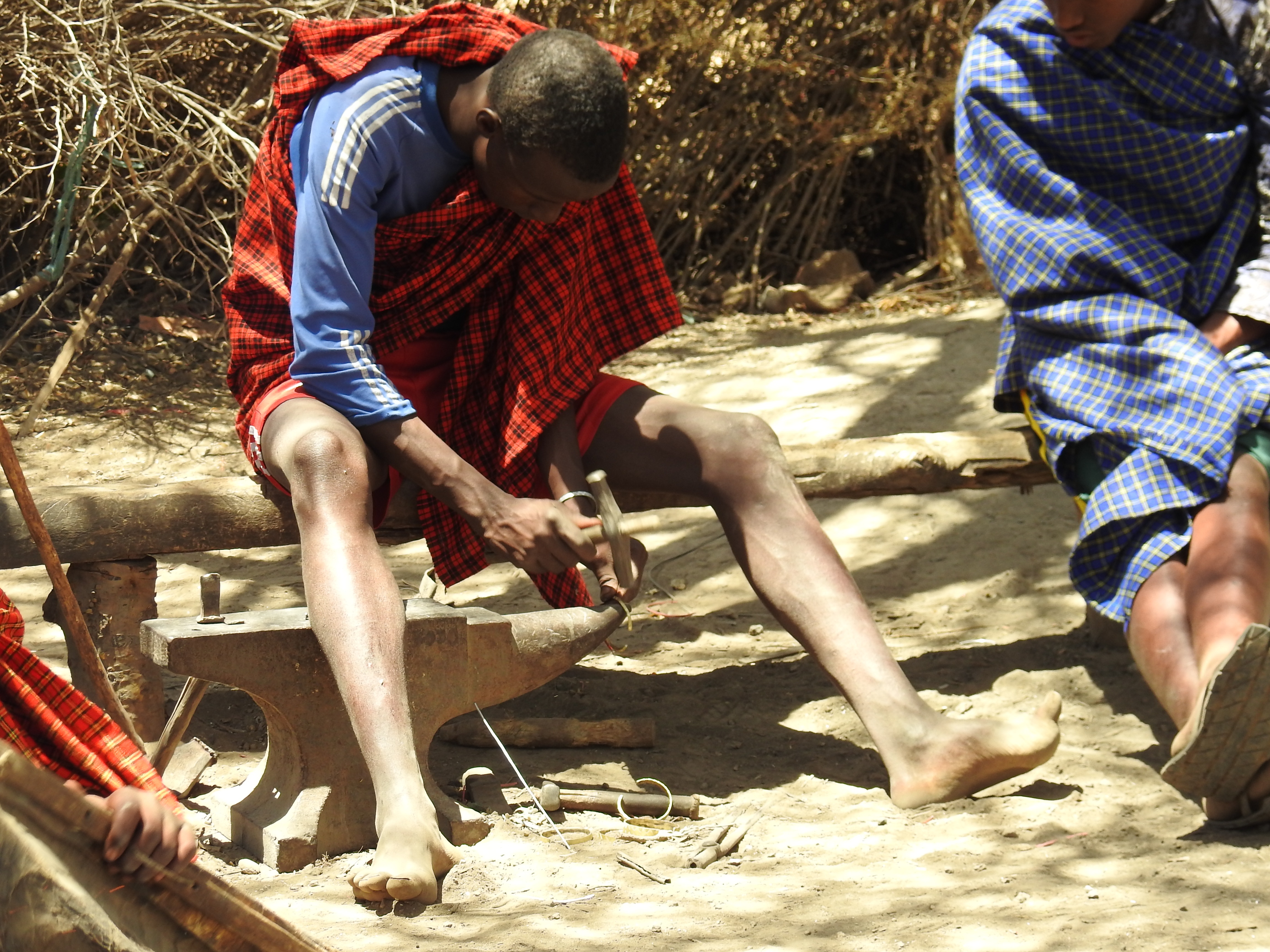 I bought two elaborate arrowheads and a spearhead that I hope to mount in my office. The rest of the team got a few cool bracelets.

As we left, I felt incredible gratitude for the lives we have. We are healthy and have a staggering array of opportunities for our children. We can travel and have great comfort. I am also deeply appreciative of my marriage. These tribes each practiced polygamy, but I was so happy to be married to just one person. Polygamy might be good for some, but I refuse to trade down!