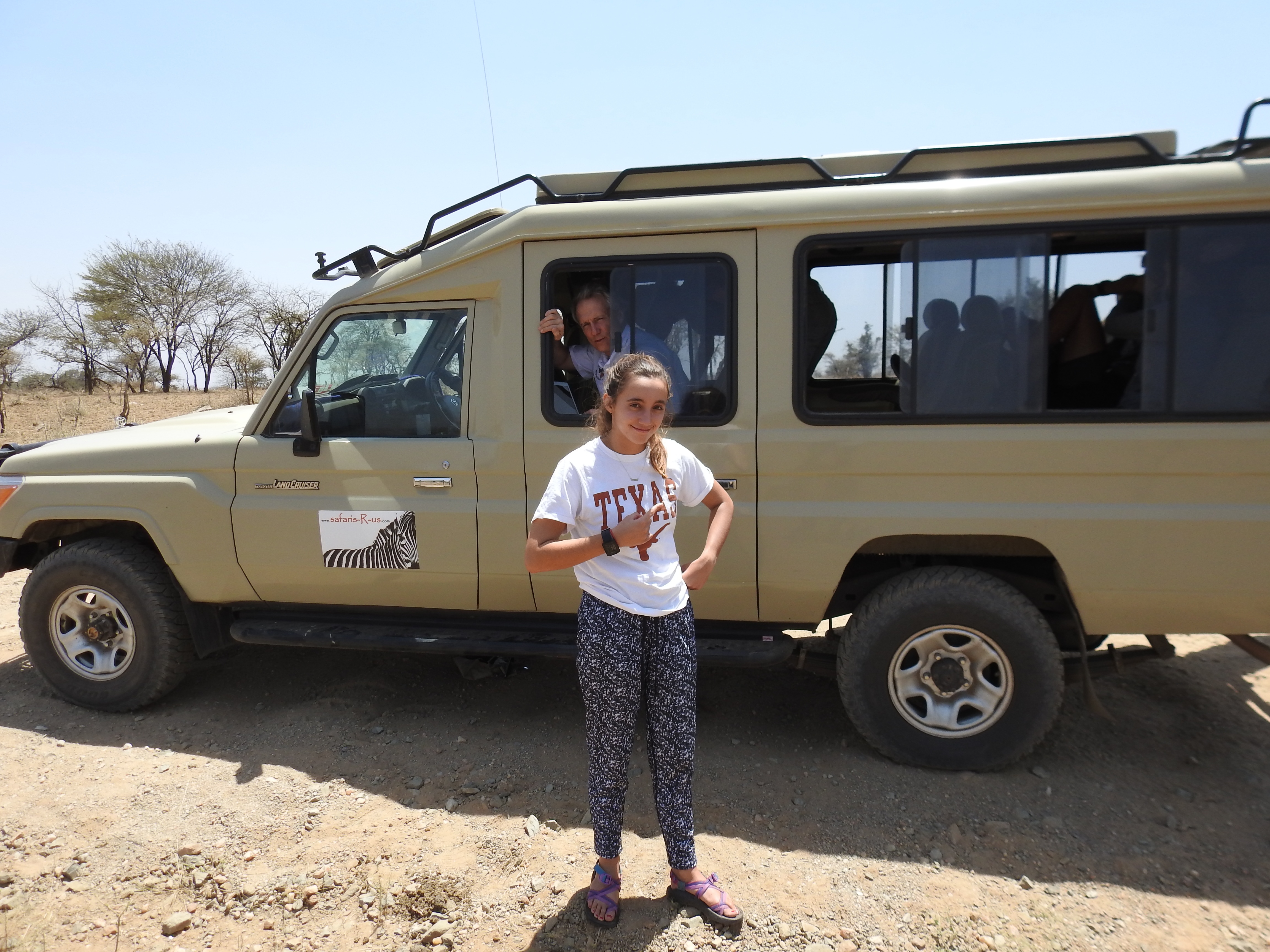 [This is the second of a two part blog.]

In the previous blog, I described how we spent the morning seeing baby elephants and stunning scenery. We had also had the truly rare opportunity to see the endangered black rhino.

As I mentioned in that article, we started extra early in order to cram two days into one. The first half (seeing animals and sights while driving slowly) was over with the rhino sighting.

The second part required that we cover the 250 miles that I mentioned before.

Apparently, we had lingered over the elephants and the rhino and were about 30-45 minutes behind schedule.

We put the top on the vehicle down, put on our seat belts and began to drive in earnest to the Ngorongoro Crater.

For the past week, we have been punishing our Toyota Land Cruiser.

At 1PM, she punished us back.

After going over a bump, we heard a sound. [Note: the bump I describe would be the type of chug hole that would lead to lawsuits in a major city; perhaps 18 inches deep. On these roads, however, it was about a 6 on a 1-10 scale.]

Walter’s demeanor did not change.

“Not a problem. We stop here and you enjoy your box lunches. Let me have a look.”

He takes off his official safari shirt and crawls under the car in a black t-shirt. When he comes out, the front of the shirt is still black, but the back is a tawny color. The dust had completely covered any part of the original color.

He came back to us and said, “it is hard to see what has happened. He then grabbed a jack and investigated again.

He then comes back up again, asks us about our lunches and starts to talk on the CB radio to the rangers. He speaks in Swahili, but the call went out to “Ranger Station”.

“Is everything OK?” we ask.

“Yes, we always want everyone to know we are here.”

Within a few minutes, we realize that we are serious broken down. I get out and take a look. [Note: anyone who knows me will surely find this hilarious. I have no mechanical skills at all. I just thought maybe I could see something. I know this seems ridiculous.]

It turns out it was not ridiculous. It was not hard to see that the drive shaft was busted. I know little about cars, but I do know that there is a shaft that runs from the engine to the back axle that transfers the engines power to the wheels. I hope I do not get too technical here, but the following concept is quite important:

Look that one up. You will see that I am right.

Walter hails a few fellow drivers to help. He joked that it was the “Tanzanian Automobile Association”. [Note: this is related to SNN, or the Serengeti News Network. Anytime two drivers pass each other, they stop for 5-15 seconds and chat briefly. In this way, they know what animals are out, what the weather is like ahead and (I assume) who has a car full of loud Texans.]

An hour later, an empty Toyota appears. The driver is a friend of Walter’s (Jonathan) on his way to pick up a group from the nearest airstrip. He was delighted to take us to the visitor center near the airstrip, were we would be more comfortable.

The drive with Jonathan was not a lost cause as we came upon a group of panting lionesses. 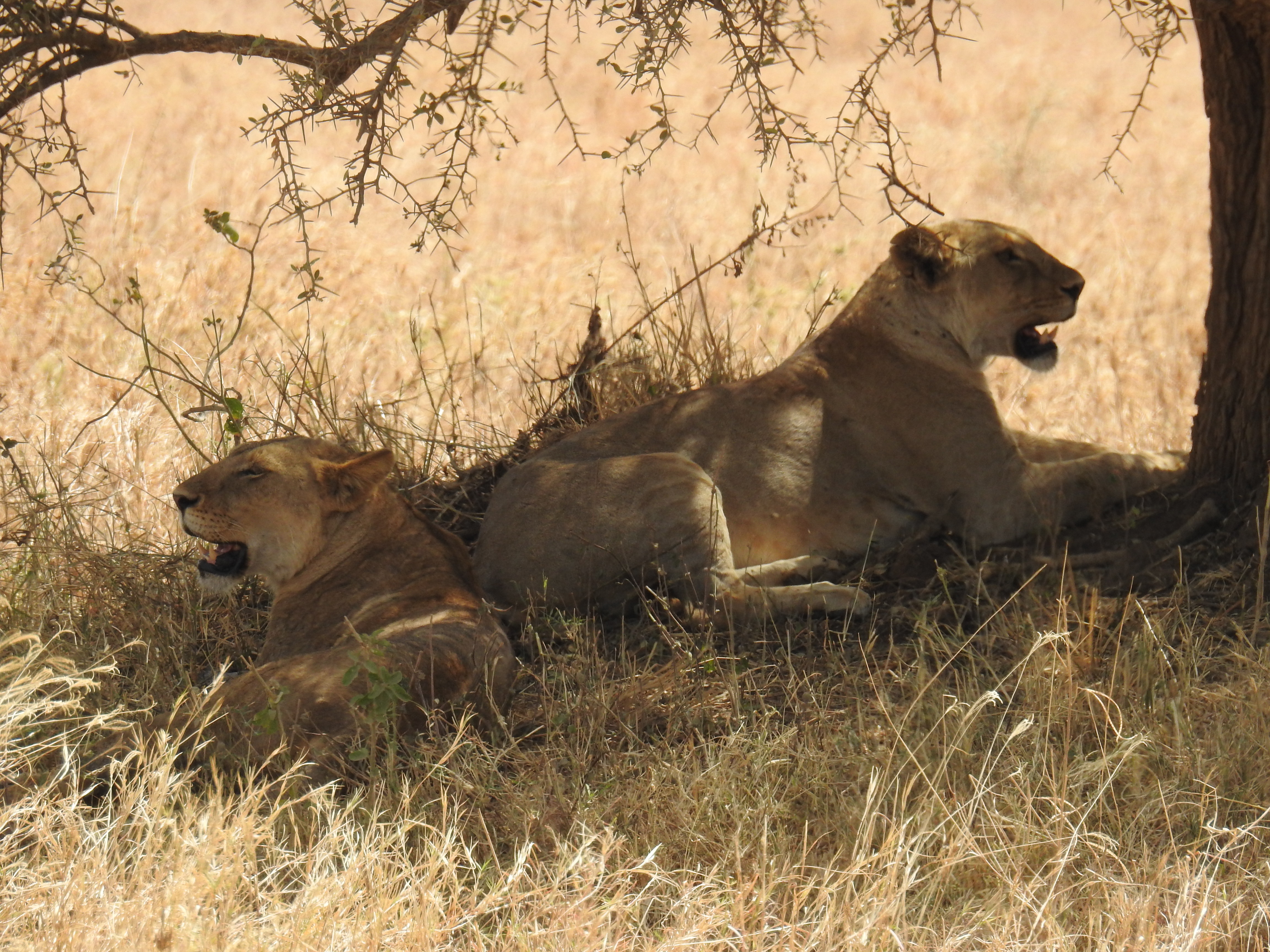 But despite the felines, Walter’s last words kept ringing in my ears: “I should be there around 3:30 with the car,”

My heart sank every time I thought about this quote. I had confirmed with Walter that the drive shaft was broken (he called it the “propeller shaft”, thus slowing our ability to understand each other). I also knew we were in the middle of nowhere. We had not passed a gas station in 2 days. We were in a National Park.

Further, I know that no car repair happens immediately. The car needs to be towed. Parts must be ordered.

And that rule assumes you are in a city.

We went to the visitor center and waited.

In the 3 hours we were separated, he had some truck drivers help him remove the drive shaft and put it on the top of the truck. He then engaged the four-wheel drive on the front wheels – thus making it a front-wheel drive two-wheeler - so that he could drive to a friend with welding gear.

He happened to have the critical part (some gasket) in the car with him. Let me say that again. The one part that would have been impossible to locate in less than 2 days was in our car. I am guessing that there are over 1000 parts to that vehicle, 100 of which are critical to locomotion. A piece of a drive shaft should not be one of the pieces you happen to have on hand.

So we continued our drive four and a half hours behind schedule, arriving at the Sopa Lodge around 9:30 rather than 5:00.

At camp, we like to suggest to campers and counselors that there are not problems, only opportunities.

To be honest, I initially had trouble seeing the opportunity of this breakdown, but some important lessons did soon appear.

So we are rolling again and a little closer to Walter and each other.