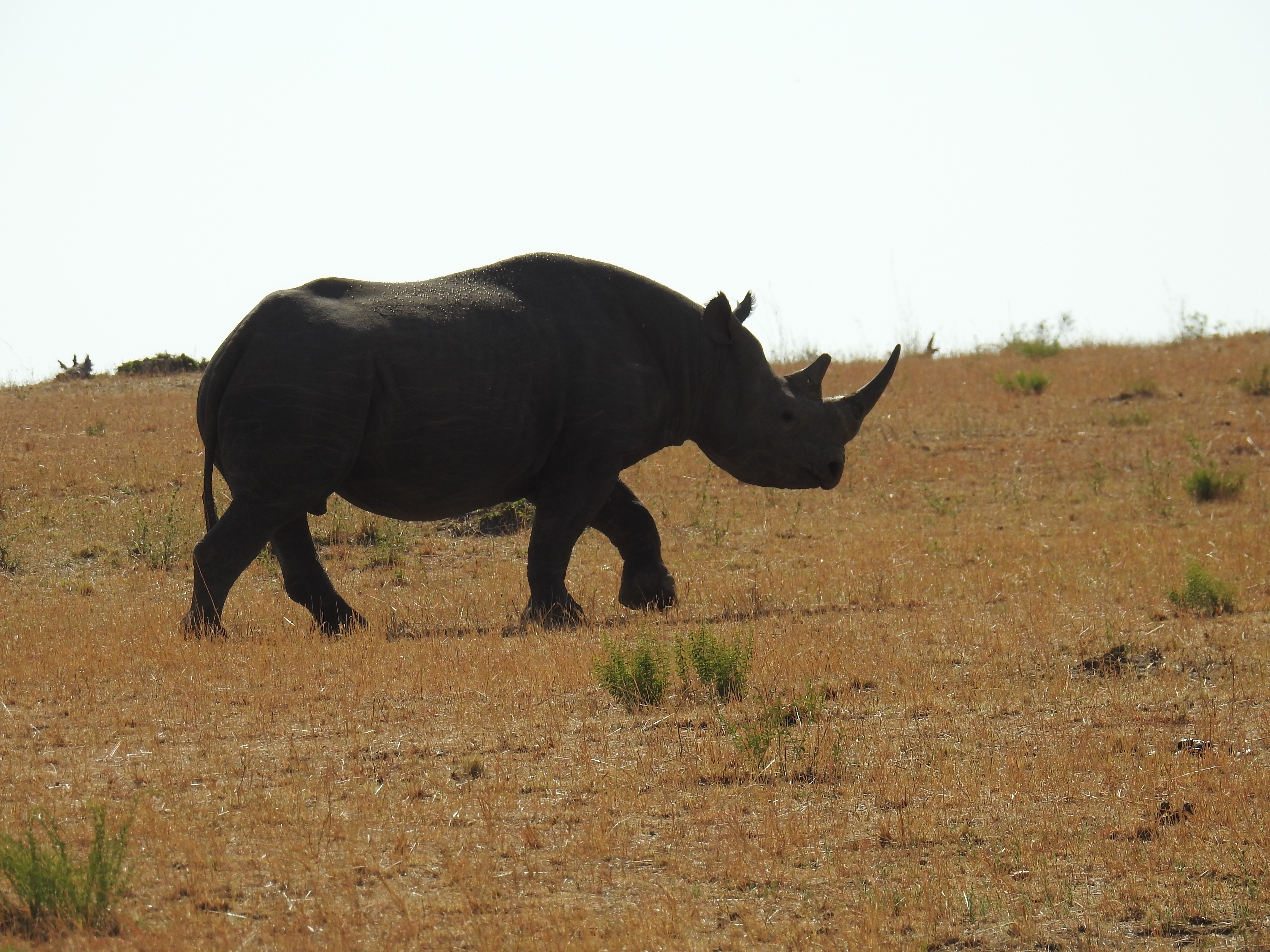 [This is the first of a two part blog.]

The day started early. This is normal. We saw enough by noon to make a complete day.

But this would end up being more than a complete day. I am breaking this tale into two blogs. The first will describe the morning. The next will detail how the day became a challenge.

Walter told us we would be leaving our tented camp early for a 7AM departure. We needed to wake around 5:50, pack our gear, eat breakfast and pack our safari van.

It is worth sharing a little about our vehicle. It is a Toyota Land Runner that is incredibly rugged. It is custom-made for safaris, with a roof that opens so that we can view wildlife safely for 360 degrees. It has two gas tanks, which is incredibly important as there are no gas stations in the entire Serengeti.

Here is the team in our chariot. 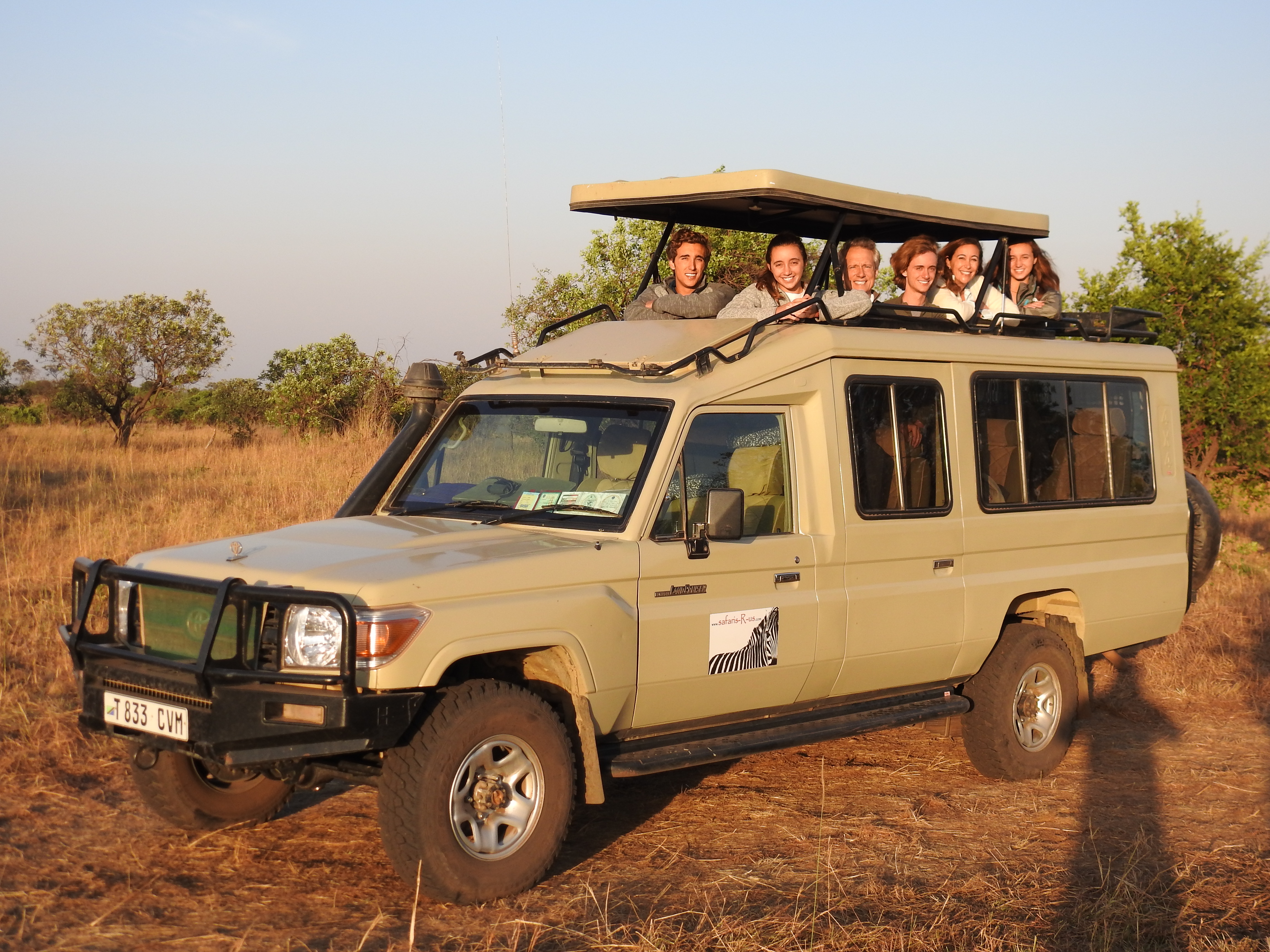 It has roughly 40,000 miles on it. These miles, however, should not be confused with Interstate 10. Paved roads are the exception during our travels. The dirt roads are rutted and ribbed and often require 4-wheel drive just to go straight.

These roads are also fantastically dusty.

I grew up in Midland, TX. I remember sitting a Midland Memorial Stadium as a dust storm camp toward us, hit the opposite stands, crossed the field and hit us. That storm was like a wall of sand and dust.

The dust here is much finer. The granules are tiny and infiltrate everything.

Here is a picture of dust coming up as Wiley walked yesterday. 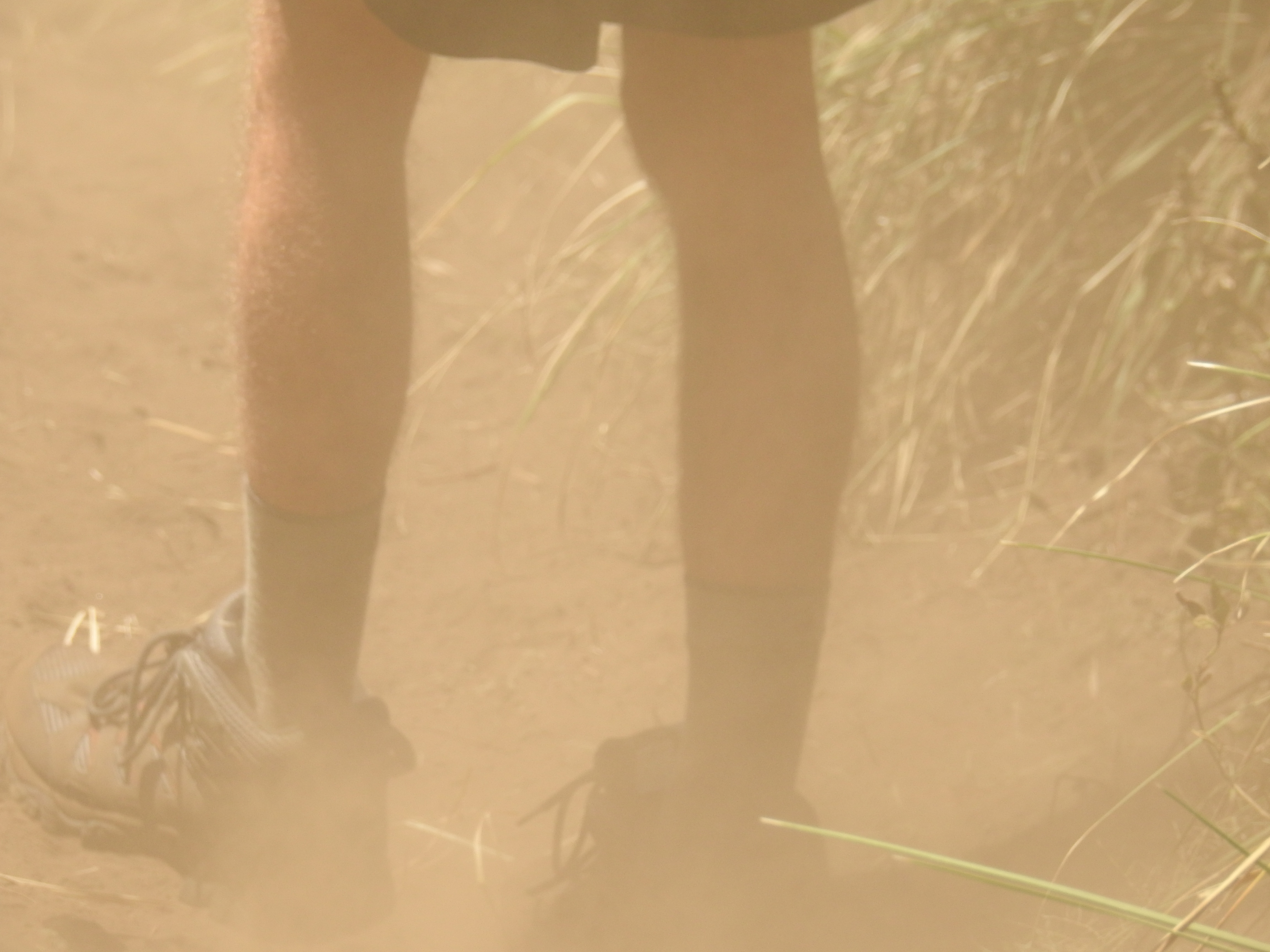 So when you drive on these roads, you kick up clouds of dust. We have all heard the phrase “eat my dust”. Well, my good friends, your humble narrator has been doing that for a week. When large trucks passed by, we experience a complete “white out” for roughly 2 seconds, forcing us to slow substantially and grasp all windows to forcibly seal them.

The light dust also contributes the frequent and often-impressive dust devils that will rise up over 250 feet.

In short, this is some serious dust.

The reason we woke early was because we were trying to cram two days into one. The morning would be a tour of animals and the flora of the Serengeti. Following that tour, we would drive 250 miles to our next destination.

Sure, 250 miles does not sound bad. My Davidson roommate (a Connecticut native who was fascinated with the shotgun-straight roads of Texas) liked to joke that 250 miles would take just 2.5 hours in West Texas.

OK, that was an exaggeration, but we Americans can cover 250 miles in 4 hours comfortably at home. Ah, but remember the rutted roads of the safari. 250 miles here will take well over 6 hours. And, once you have accomplished this feat, you will feel like you have been a lottery ball for the entire time.

But we would start with the animals.

As I say above, the day began on a lovely note.

We saw a giraffe next to this picturesque tree. 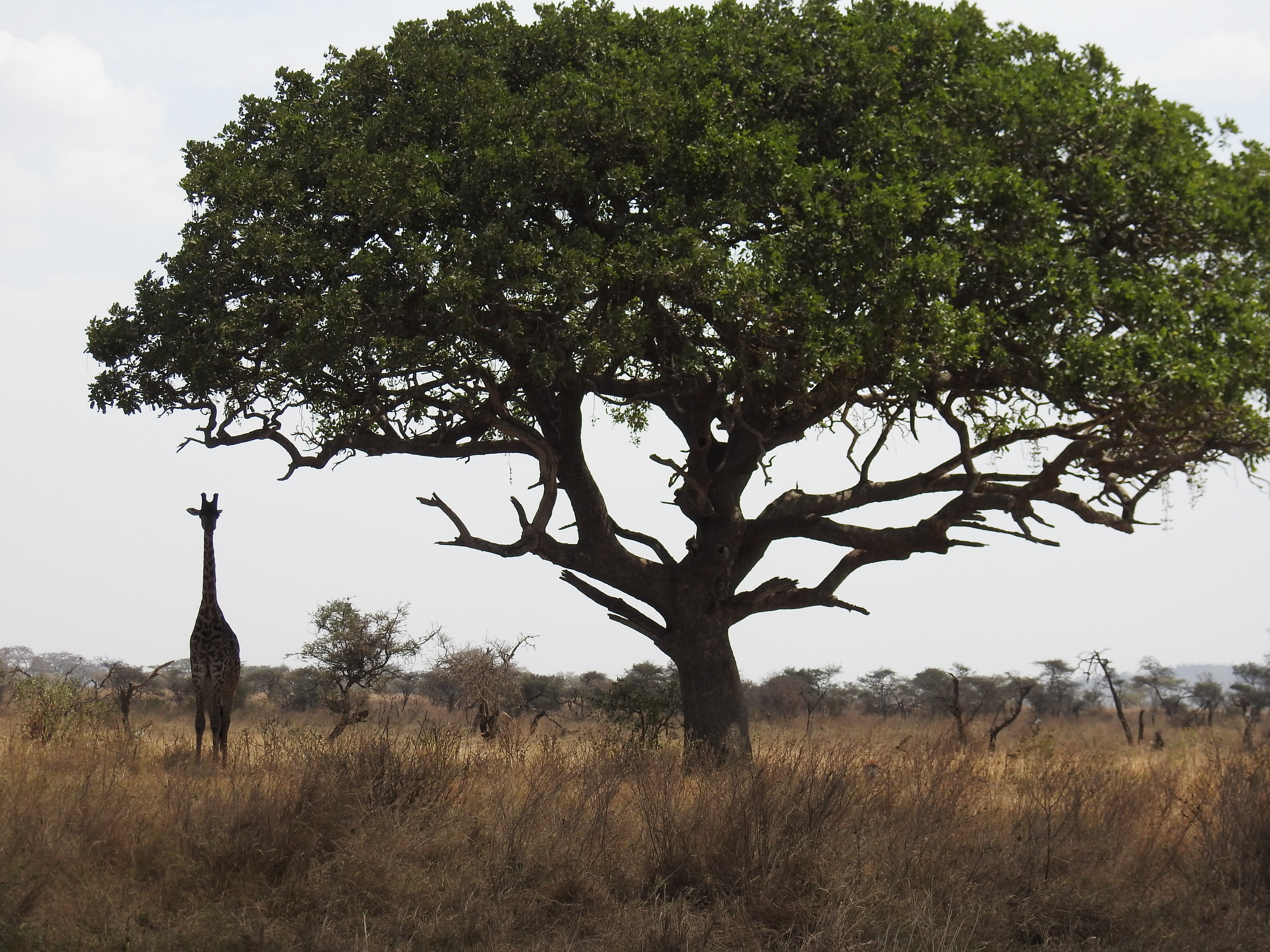 We came across a breeding herd of elephants. They appeared to be playing with one another. A mother and calf won our hearts as we watched them rub and groom for 15 minutes. 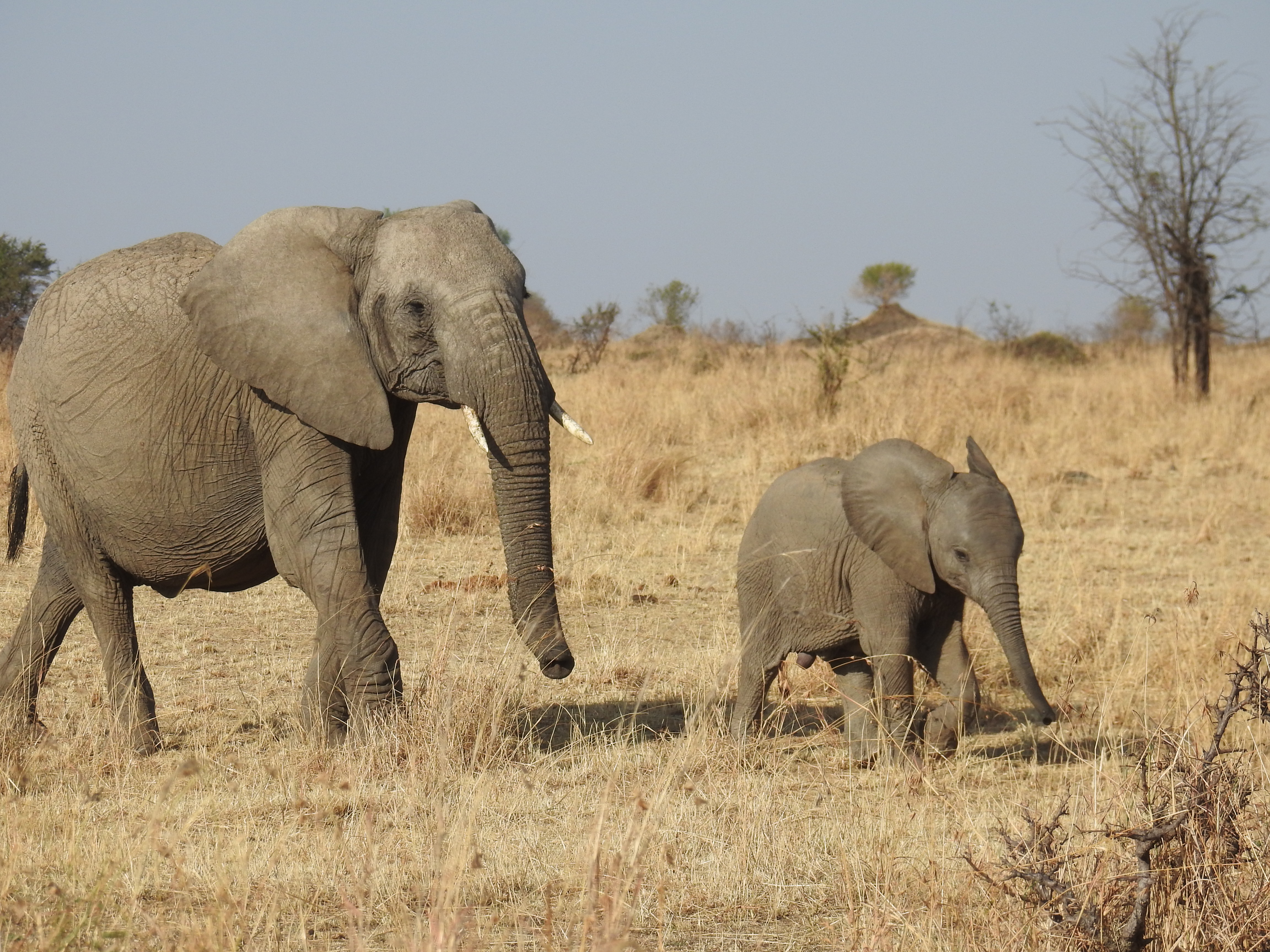 We drove by a fallen wildebeest that had reached the third stage of Serengeti feeding. The first stage is the predator (lion, leopard, hyena) that brings the animal down and first feeds on it. After the predator has eaten whatever it wants, the scavenger mammals follow them. Hyenas are also in this category along with the jackal. [Note: an organized group of hyenas can steal a kill from a single lioness, leopard or cheetah, so the order I describe is actually quite fluid.]

After the scavenger mammals eat most of a carcass, the birds come in to finish the job. Here, these include vultures and storks. Admittedly, this is not an attractive photo, but the spectacle itself was well-worth watching. Within seconds, we learned the pecking order between species and within the groups. The top bird literally perches on top of the carrion while both eating and directing traffic. Some fellow vultures enjoyed eating with her, but others were run off with a flamboyant display of wing batting and pecking. 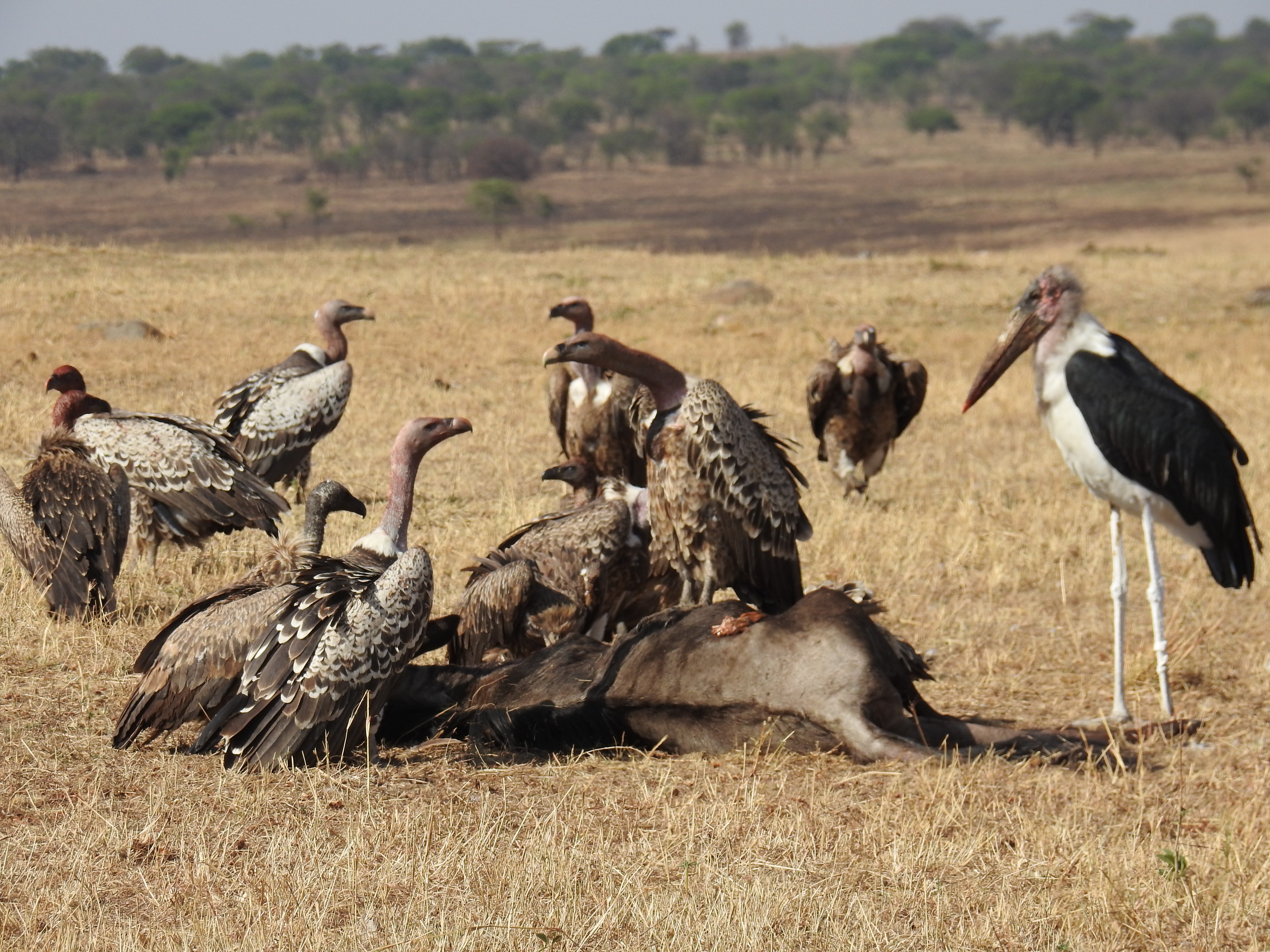 We started to drive again when Walter suddenly became incredibly excited. By this point, we have learned than an excited Walter means something unusual is happening. 98% of the time, he embodies “hakuna matata”. {Note: just as the Lion King taught us, this means “no worries. I am assuming that song will be stuck in your head for the next hour or two. Sorry about that.]

“Please open the top of the car. Quickly, quickly,” he encouraged us.

While we were opening the top, he began to drive.

We have come to learn that only 20% of 7-10 day safaris will see a black rhino. They are part of the “Big 5” animals that can easily kill a person walking on foot (Lion, Leopard, Elephant and Cape Buffalo are the other 4). The “Super 8” are the animals that everyone longs to see in Africa. They are the Big 5 plus the Cheetah (also quite elusive), the giraffe and the hippo.

When we first met Walter, he spent 30 minutes giving us an overview of our itinerary. He described the circuit we would drive, where we would stay and what we should expect to see on each day.

“On the first day, we will go to a park with many giraffes. The Ngorongoro Crater will be a great place to see lions. We will see elephants on the Serengeti. If we are lucky, we may see a leopard. Cheetahs are very hard to spot. There are only 150 in the Serengeti, but I have been lucky lately.”

He described animals and trees and birds and geological features like a waiter at a restaurant describing a luscious menu.

“Where do people see rhinos?” I asked. I had heard about the “Big 5” and “Super 8” and had a mental checklist in my head. Please do not confuse me with someone that MUST see all the animals on a list. I strive to appreciate what we are seeing rather than long for what we might miss. Nevertheless, I had heard him mention every animal except the rhino.

At least two other times, Walter seemed to skirt around any rhino-related question. As I think about it, I feel deep sympathy for him. I imagine that many people he guides fully expect to see everything on their list and are disappointed if that does not happen. In fact, I suspect that he has had some guests that became sufficiently angry or disappointed that he was sad or frustrated himself. Walter is a deeply empathetic man. When we are thrilled, he is truly thrilled with us. So I suspect that a disappointed guest would make him really uncomfortable.

With this in mind, he developed a strategy to manage our expectations. If he can keep us from thinking about rhinoceroses, then we would not feel bad if they never appear.

So when he saw a lone black rhino, he rushed into action.

We kept our distance to avoid stressing the animal (or inducing a charge – you choose the reason you prefer) and watched him walk methodically into the distance. 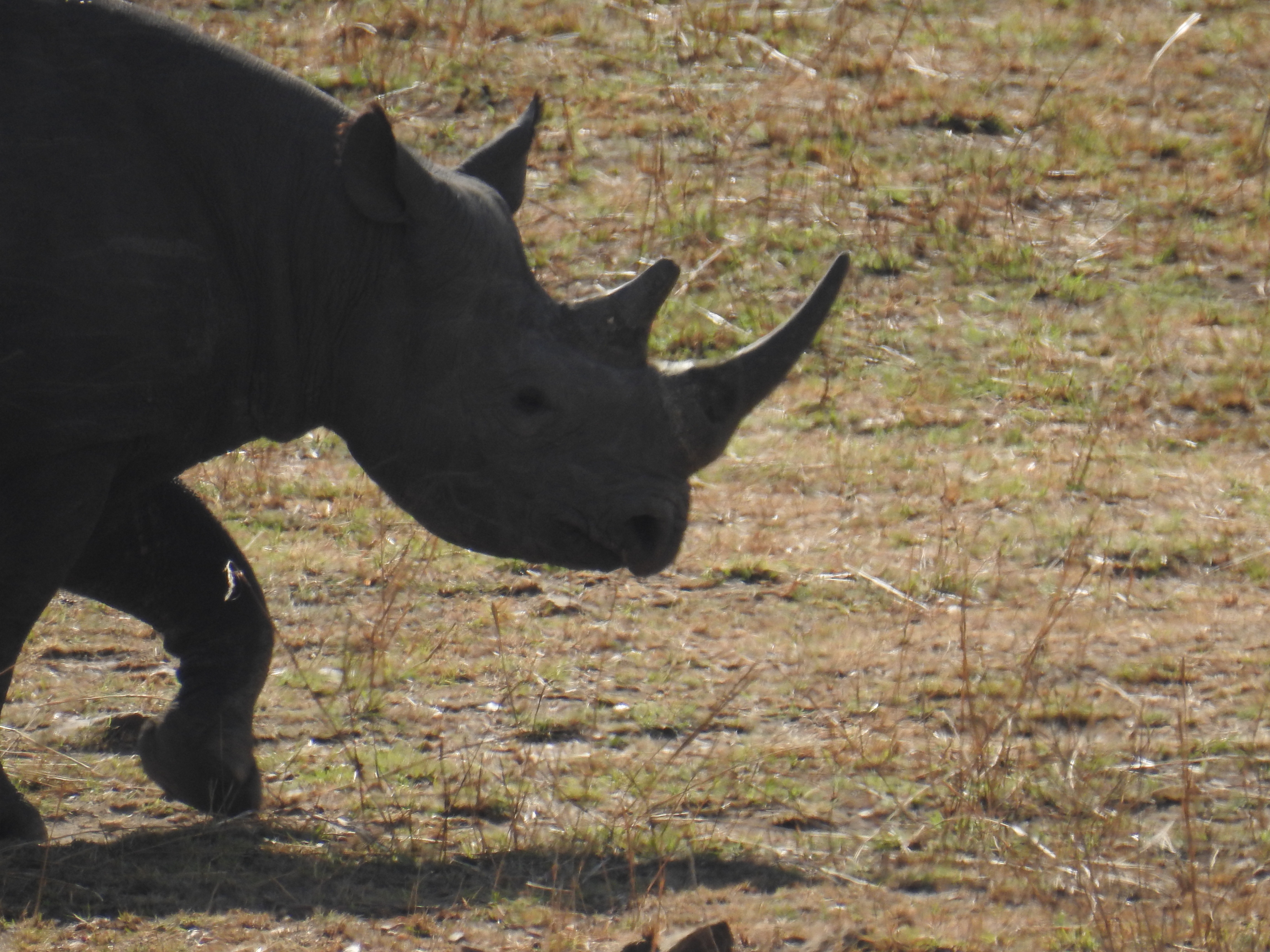 Walter was beaming. In this moment, empathy was reversed. His joy fed our excitement. He was practically giddy. After the rhino was out of sight and we were driving again, he explained why.

He told us about the 20% sighting rate. He described the efforts to protect the rhino from poachers, but reported that the efforts have not had sufficient success to stop the decline in numbers.

So we then really shared his excitement at the sighting and the sadness of the rhino’s history.

The day started great. Other travails would start soon.