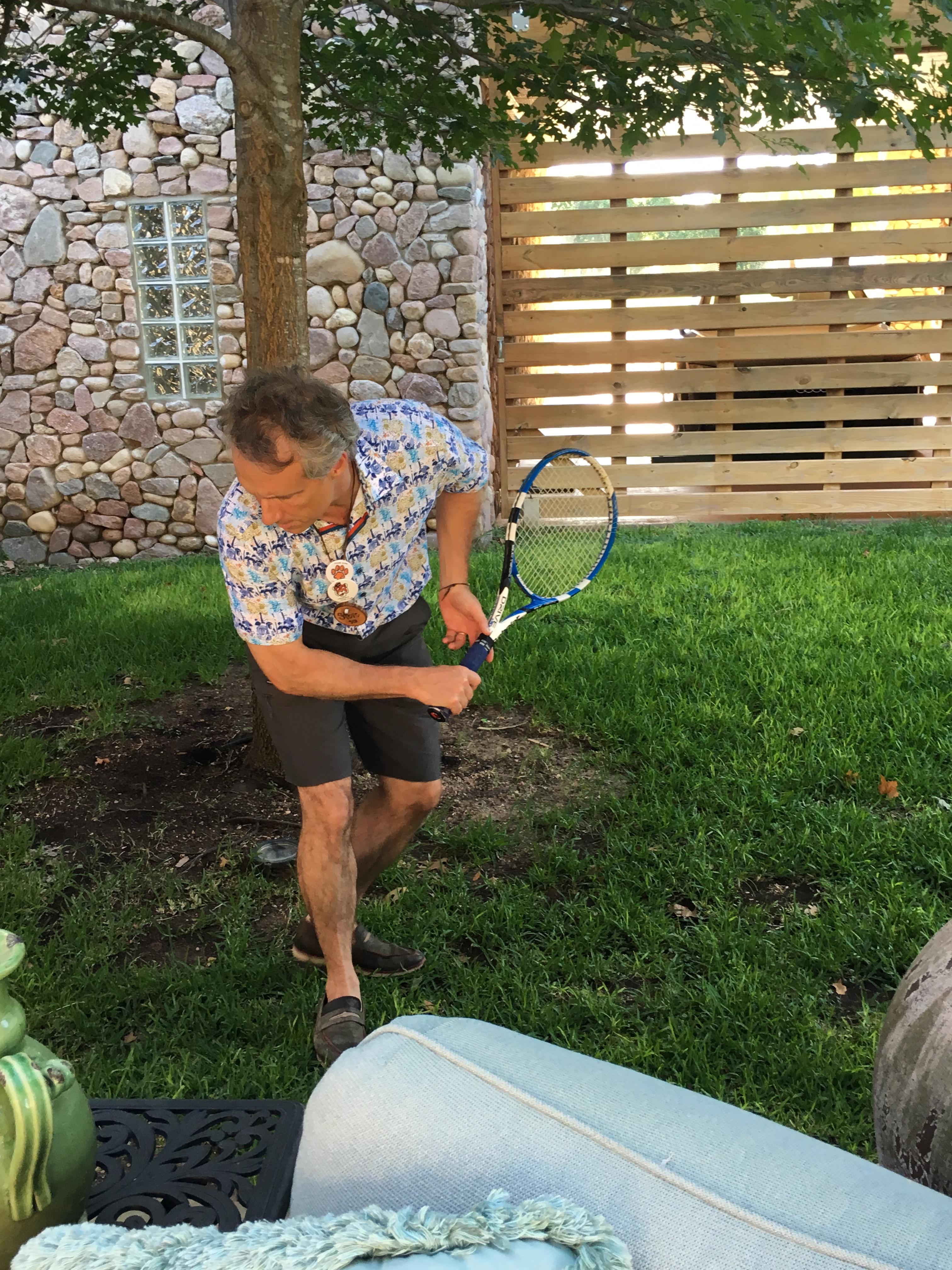 The campers who were watching me thought I was crazy. Here is what they saw:

A middle aged camp director poised in a field with his tennis racquet in the position to hit a backhand. He was completely still while staring ahead. Suddenly, he swings quickly, smiles and repositions himself.

Once again, he stands like a statue, this time positioned for a forehand. After several seconds, he swings.

The old man must be off his rocker.

What they could not see were the ground hornets that I was swinging at.

Please do not worry about the bugs. We have not had a hornet sting any camper this summer. But one did sting our Site Manager in May, but he was reaching into some plants where their nest was hidden. The vast majority of their ground nests are behind my house where they create piles of dirt in our lawn. As a rule, I generally believe that the best hornet is a non-living hornet.

So my racquet and I go on the hunt and I get to practice my tennis groundstrokes.

But if you cannot see the hornets, it looks like I am swinging madly at nothingness. It does look rather loony.

It took me a while to realize why I get satisfaction from this endeavor. The insight came to me when I was also pulling some weeds.

I like swatting hornets, pulling weeds and cooking meals all for the same reason – these activities provide instant satisfaction.

Let me explain why this matters to me.

Being a camp director is a lot like being a parent – if you do you job well, it will take years before you see the ultimate result of your efforts. Time spent reading to a 4 year-old will eventually lead to a well-read college student, that that will take 16 years.  We spend time modeling values so that our children will someday be leaders and parents, but it does not happen quickly.

Over the years, the campers that first join us as 8 or 9 year-olds will become Senior Campers . . .

. . . and parents [Note: we have several campers here whose parents were campers with us in our first summers. This thought makes me feel simultaneously joyous a little old.]

Seeing former campers as confident and contributing adults brings us pure joy, but it certainly takes a long time.

But pulling a weed, making a pasta sauce or backhanding a hornet into oblivion takes only a few seconds or minutes. A little instant gratification is a nice contrast to the long-term nature of our mission.

So while we are helping our campers grow into the Champions they are meant to be, I will continue to channel my inner Roger Federer with those hornets in my back yard.