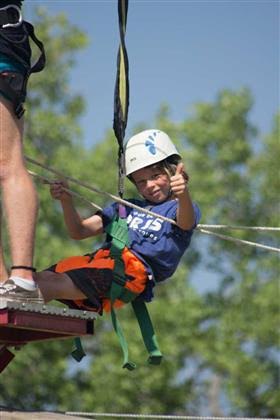 Let’s be honest, safety is generally not seen as cool or fun. Important? Yes. Fun? No.

But as you look around camp, you will see some profound acts of creativity that change that perception.

Over the years, we have learned that inspecting safety into camp is much harder than getting campers to embrace it. Games, songs, jokes, and imagination can all help make the most mundane health or safety practice into something the camper embrace. OK, “embrace” might be a strong word, but at least not rebel against.

Campers generally hate sunscreen. It takes time to apply and every moment they are applying is a moment that they are not doing something awesome. You and I understand that fun in the sun now can result in becoming a lobster in 5 hours, but most of our younger campers are less focused on such minutia. A good counselor can make a game of applying as a group, perhaps inserting a song (girls’ side technique) or couching it as “mission prep” (boys side technique).

Reapplication is particularly resented. Heck, you do not have to re-apply to school or a new credit card, why should you need to apply and reapply sunscreen? Specific activities – particularly the water activities where sunscreen can wash off – have rituals that encourage entire groups to re-apply. I have seen a train of 12 campers each putting sunscreen on a cabin-mate’s back.

When we decide that a cabin is simply not staying on top of the sunscreen, we go to “war paint”, also known as colored zinc oxide. Few sites are as consistently amusing to me than a group of 7 year-olds all “painted up” using their own individual style – each ready to attack the day.

Here are a few other examples.

To assure hydration, we require that the campers drink a full glass of water at every meal and during breaks throughout the day. Several years ago, one of our more boisterous counselors created the “waterfall” tradition. Campers stand on their benches in the Fillin’ Station (our dining hall) with a full glass of water. The counselors counts down, “Three, two, one!” and the entire cabin yells “waterfall” and drinks the entirety of the water. It assures that each camper gets the requisite hydration while building a little cabin unity.

At riflery (offered to the campers who finished the 5th grade and above), we require eye and ear protection. But they are no ordinary protection. The earmuffs are “Beats by Dre” and the safety goggles are “Google glass without the Google”.

Campers coming down the climbing wall are told that they look like a superspy who is rappelling down to an important mission.

Even cabin inspection is designed to be as fun as we can make it, with the occasional “themed inspection” (e.g., Harry Potter, Olympics, etc) or a song.

I doubt we are making being safe truly cool, but we strive to make it a tad less boring. We hope your camper returns with a little more appreciation for safety.