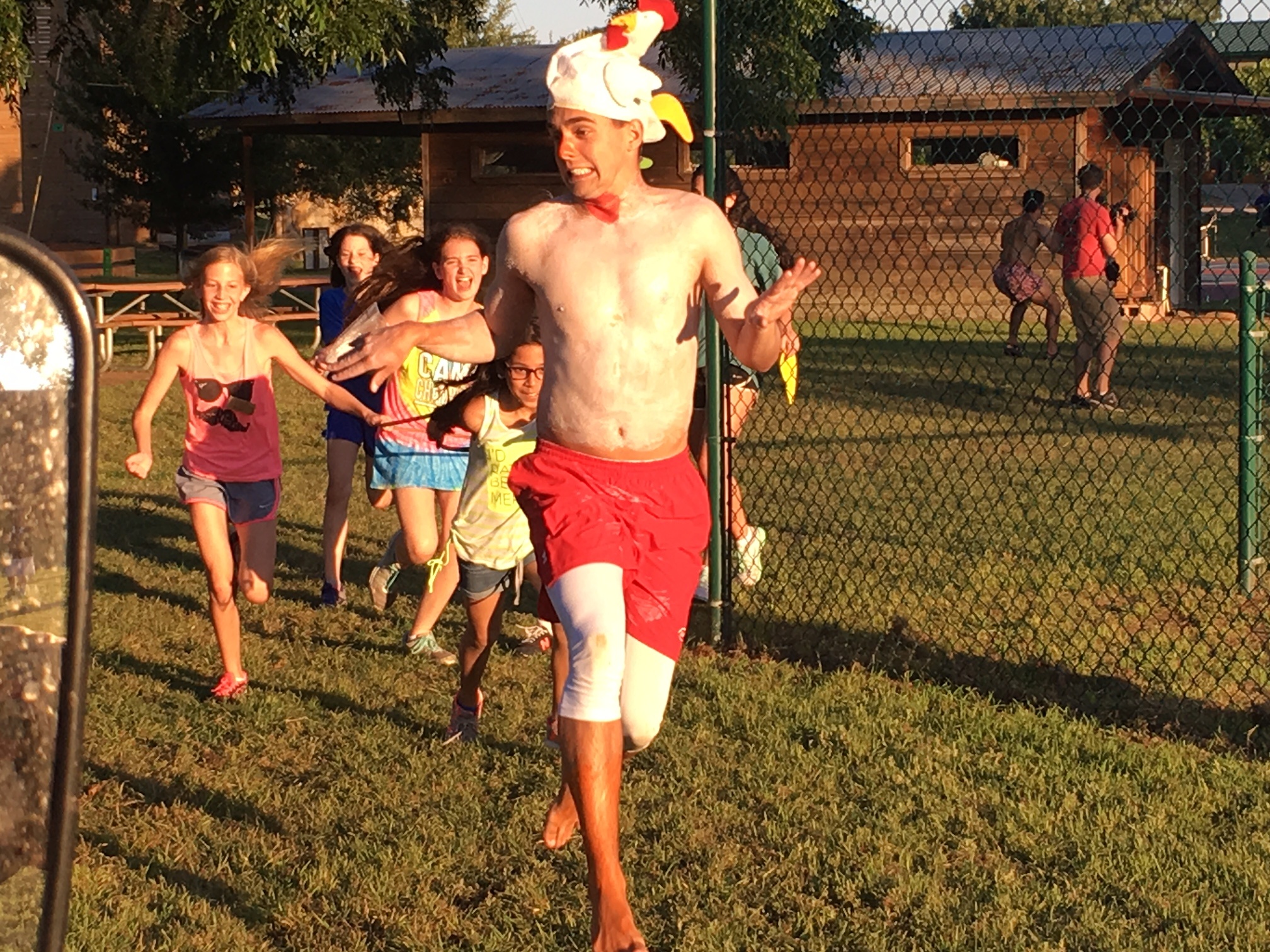 Tonight we had “Green Acres”, an evening activity where farmers (our campers) chase loose farm animals (our counselors dressed as cows, mice, dogs and other barnyard critters).   Each animal is worth a different amount of points and the campers catch them as a team. Some of the critters are runners while others are hiders. The campers in the cabin with the most points will win slushees. [Note: since we do not have sodas or sugary treats at camp, the rare 7 oz. slushee suddenly becomes an item that is highly valued. Who knew?]

We like to have high-energy activities in the evening on the first couple of days. Doing so helps the campers get to bed easily (and early), assuring that they will be ready for the next day. [Second note: we are not so foolish to give the slushee at bedtime. We know better than that!]

Susie Ma’am and I also love Green Acres because it is simply fun to watch. The light is lovely, the campers are giggling and the counselors look awesome.

No, this is not a life-skill, but it is a great way to enjoy the last hour of the day. But if you have any pigs that get loose, your camper will be able to help!

During the next two weeks, Susie Ma’am and I will invite each cabin into our home for a get-to-know-you session called “Friendship Games” (girls) and “Man Cave” (boys). It is our way of getting to spend time with every camper and enjoy the humor and insight of each. We sit on the floor in a circle, do some activities and talk.

As you might guess, we occasionally get a few amusing, if not downright clever, comments. I will share some of the better ones with you. Here is the bounty from today:

Last night, a counselor shared a conversation between 8 year-olds. They were discussing how late they could each stay awake. “I made it to midnight on New Years!” “I can stay up until 2!” “I don’t even need to sleep.” [As you know, little boys like to one-up each other. I once had a discussion of fishing conclude with two boys claiming that they had sharks in their swimming pools.] Nevertheless, the gem for me was the final boy who proudly (and defiantly declared), “I can stay up until I fall asleep!!”

Here is another story from the younger boys. A camper asked Chibby Sir (Alex Chibante, the Rookie Division Leader) for a nickname. Without missing a beat, Chibby Sir declared that he could be called “Night Falcon”. He seemed excited; inspired even. Around bedtime, he was walking down the stairs and noted that he could not see perfectly in the dark, prompting him to declare, “My name is a lie!”

Our favorite comment was the response to the question “what is the nicest thing anyone has ever done for you?” A 9 year-old girl smiled and simply said “my parents sent my brother and me to camp”.

Yep. That is all I need to keep me going!