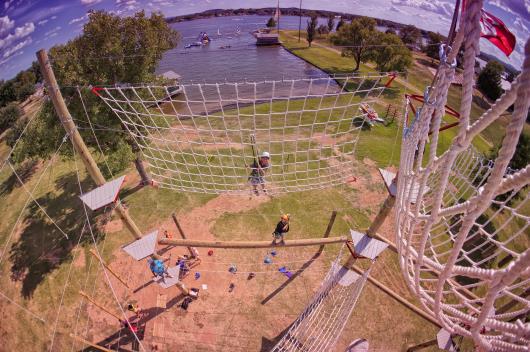 The Outdoors department houses what I believe are the “campiest” activities at overnight camp. I might be biased, having been a department head within Outdoors for three summers now, but let me tell you why. The activities in Outdoors – the rock wall and Pirate Ship, archery, riflery, horseback riding, and more – are not things that kids usually experience anywhere except at camp. (Some kids rock climb, shoot, or ride at home, but not most!)

So Outdoors resonates with our campers as something uniquely “camp.” The lake probably does too, though I would argue that it’s probably easier to find swimming opportunities outside of camp than archery opportunities. Sports and fine arts are common in schools and in extracurriculars as well.

But learning the nuts and bolts of how to do each of these activities, as cool as they are, isn’t truly what camp is about. Activities are important for other reasons. Specifically, the benefits of outdoor education and outside play make sleepaway camp a significant summer enrichment opportunity. Here are what I believe to be the top five skills kids learn in Outdoors at camp, though there are of course many more:

Imagine you are 6 years old again. You’re probably around three and half feet tall, give or take. You’re at a brand new place, with brand new people, and you’re away from Mom and Dad for the first time. Scary, right? Well, not only that, but you’re also standing in front of a 45-foot climbing wall and told “You’re gonna get to the top!” To you, it looks so high and so far away that it appears to sway like a skyscraper.

We see that child every day in the Outdoors department. Almost every single one of them gets up on that wall and gives it their best effort, and many of them reach the very top! It’s clear to see how the climbing wall addresses all three challenges. Campers at the top of the wall are breathing heavily, their arms and legs sore. It’s a big change from the relatively sedentary life of school and home – or even for those very active kids who play sports, not many kids are involved in extra-curricular rock climbing. It’s a different set of muscles, and it’s just hard to climb 45 feet straight up, no matter how in shape you are! The physical challenge is obvious.

The mental challenge is how to improve self-confidence. Can I really get that far? But I’m scared of heights! Or maybe a camper doesn’t even know he’s scared of heights, but then he gets on the first element at the ropes course, and he is frozen with instinctive fear. It is absolutely normal – and expected – for our hearts to beat a little faster when we’re far above where we’d be able to catch ourselves ordinarily.

Logic has to kick in. A camper learns to think through the reality of the situation: yes, I’m really high up, but I’m wearing a harness, I’m connected by carabineers and climbing rope to my belayer, and they are keeping me safe. Knowing that, all that’s left for a climber to do is to believe that he can do it. And that’s a big thing to ask someone to believe, but with the encouragement of counselors and cabinmates, most campers do. They accomplish a difficult task that they weren’t sure about at first, but can now claim as a victory.

Finally, there’s the social challenge. No one exists in a bubble, and that’s especially true at camp. You share a small cabin with 10 or so other people, and you spend every day with them. At our rock wall and Pirate Ship, we make sure no camper is sitting on the bench simply watching or waiting. Instead, they are up on their feet, cheering on their friends, or giving them advice about what to try next. As a climber, it therefore becomes even more important to try your best to live up to your peers’ encouragement!

This year, we even implemented special days of challenge climbs: campers climbed the wall while connected by a “monkey tail” of rope, or had to bring a beach ball to the top together, or wore blindfolds while partners directed from the ground. Every group found the tasks difficult, but they got better and better with the support of their partners.

There are quite a few Outdoors activities that involve these skills. In Team Adventures activities, or teambuilding sessions, cabins engage in games that subtly focus on a certain social skill. Hidden inside a silly “river crossing” game created with old rope and rubber play dots is a valuable opportunity for campers to work as team and to make sure that they’re supporting their cabinmates. In order to complete the game, after all, every cabinmate has to make it across the “river.”

While campers may think it’s just a game, the counselor leading the processing and discussion afterward will highlight the skills the campers worked on. The cabin might talk about how they dealt with conflict, if it arose; how they listened to a natural leader, or maybe let a quieter person share an idea; or how they thought critically and planned ahead so the whole team would be able to succeed. Even if a cabin doesn’t complete at the task, we process that too: the opportunity to learn from failure is a valuable one! Campers discuss what they could try next time in order to do better, and it almost always follows along the lines of “We should listen to each other more, and work as a team better.”

Other teambuilding activities involve trust very explicitly, too: a “Willow in the Wind” game requires the camper in the center to close their eyes and lean forward and back, only to be caught by their cabinmates any time they start to fall. Physically trusting your peers during a game facilitates the development of emotional trust later in the cabin when campers might be sharing personal stories. Practicing and recognizing the importance of trust gives campers the ability to build long-lasting friendships at camp and at home.

The climbing wall is also deserving of a shout-out too, if we’re talking about trust. Any climber absolutely and completely trusts their belayer. Campers put their trust in their counselors in many contexts, when sharing a fear or a concern, but nowhere is that trust quite so explicit as at the climbing wall!

Camp as a whole helps develop this skill. However, Outdoors amplifies it a little more! Our activities are physically distant from the rest of camp, and thus much closer to the wooded area – the archery and riflery ranges are a 3-minute walk from just about anywhere on main camp, and horseback activities adventure through the hill country on trail rides. Often we take campers on nature walks, too – just to get them seeing and learning about the native plants and wildlife in the area.

Not much is cooler to a 10-year-old boy than getting to taste a little prickly pear cactus fruit or a mesquite bean. The oldest boys and girls make s’mores over their own fire, properly designed with tinder, kindling, and fuel. And when you’re in the woods with fields of flowers as far as you can see, the youngest girls are thrilled to be permitted to actually pick their favorite flower, learn its name, and keep it to press in a book.

One of my favorite teachable moments as part of the Outdoors department was in summer 2013, a few days after a small forest fire occurred on the back edge of camp property. The fire was quickly contained and eliminated by the fire department, but we now had a section of trail that led to a gray, ash-covered forest of blackened tree trunks. Most campers looked awe-struck and said things like, “Oh, that’s so sad, the forest is dead.”

But a burned forest isn’t dead – far from it. They were curious and excited to learn about something called primary secession, or how plants that might have been unable to grow underneath thick foliage could now reemerge. In Central Texas, it’s often wildflowers that get pushed out by the shade from large trees. I explained that while the forest might look dead now, fire is actually a natural and vital part of the ecology of the hill country. Next year, because a lot of the older growth got burned off, there will be room for new, beautiful growth – and they should make sure to come back next year to see it!

I’m sure primary succession and fire ecology are covered in middle school biology classes, and maybe even in elementary school science lessons too. But learning about it in a classroom is a very different experience than seeing it firsthand. By bringing kids into nature, the Outdoors department brings nature to life, and I hope that is something that our campers will always treasure.

In our shooting activities, Archery and Riflery, we implement the Lead system. Leads are essentially ranks from national shooting organizations that you can earn over multiple flights of arrows or rounds of bullets in which you score a certain amount.

No one shoots a perfect score their first time at archery and riflery. Most people don’t get a bullseye at all. But nevertheless, we encourage the kids to record their scores. It shows them a baseline from which they can practice and build and improve. Many campers return over and over again to their favorite shooting activity, determined to reach the next lead level.

Through the experience of coming back day after day and focusing on their skills, campers learn that goals they set for themselves aren’t going to be met just by waiting and wanting. It takes a great deal of time and dedication to become an accurate shooter – and as they’re doing so, they’re practicing their soft skills of patience and determination, too. They learn to value their own hard work.

Even the campers that come to archery or riflery just a few times with a more relaxed attitude still work to improve over the course of the activity. They also practice waiting patiently on the bench for their turn. It’s a proud moment for any camper when, at the start of the activity, they have never handled a bow or rifle in their life, and by the end, they have successfully hit the target (even if it’s not in the center!)

Opportunities for leadership are inherent in Outdoors activities. At the wall or Pirate Ship, certain bold climbers will set proud examples for their more hesitant friends. In teambuilding games, leadership of the group will flip between a few natural leaders, but sometimes the counselor running the activity will “silence” those natural leaders in order to provide an extra challenge for the group. Then new leaders emerge to fill the space, stepping up into a role they are more than capable of, but might not have felt comfortable with initially.

It’s not every day that most campers get to speak their minds or be a role model for their peers, but the more experience they have with doing so, the better! They will return home with a strong belief in their own worth and capabilities.

Overall, while sleepaway camp is certainly not the only place for kids to develop these important life skills, I truly believe it is one of the best. In particular, the Outdoors department highlights these skills and enables campers to practice them every day – sometimes without the campers even realizing it! Under the guise of fun and games, the Outdoors department provides invaluable summer enrichment and outdoor education opportunities.