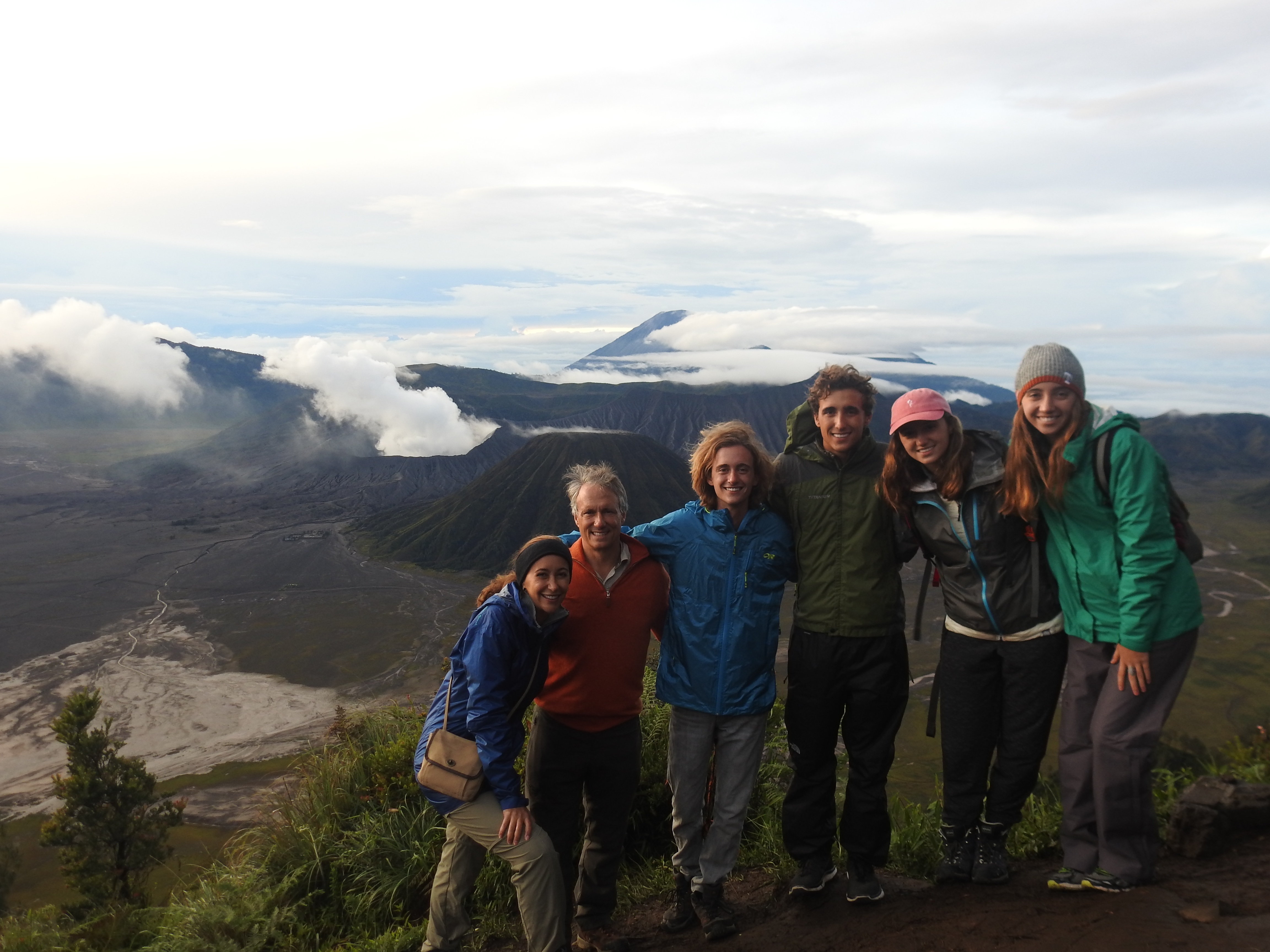 As I child, I was fascinated with volcanoes and dinosaurs. They both seemed so massive and impressive – something no one should trifle with. I think children (who often feel helpless) love to think about things that are more powerful than parents or teachers.

Sadly, I will never see a living dinosaur (barring the creation of an actual Jurassic Park), but I can see a volcano.

Little-boy-Steve loved everything about volcanoes, from their shape to their power. The very concept of lava was delicious to me – this mountain would spew molten rock. Rock! Every rock I knew was hard. I knew small rocks and big ones. I had touched igneous, metamorphic and sedimentary rocks. I was good at skipping rocks. But every rock I had seen was undeniably solid. None of them were in liquid form or heated to 1000 degrees.

But visiting volcanoes is not a casual endeavor. No one has ever said, “I think I will drop by the volcano on my way home after work.” Getting to them is not easy and getting up them is even harder.

The first of our volcano experiences was in Mt Bromo, which is 250 kilometers (by road) from the ferry station in eastern Java. As I told you, this drive took 6 hours and we arrived for a late dinner. We would start our journey at 3:30 AM the next day.

At 3:30, our guide (Nizer) and two jeeps were waiting for us. We broke into two teams of 3 and headed out. We drove for 30-40 minutes over terrain that sounded like scenes from Game of Thrones: the “Monkey Road” and the “Sea of Sand”. Most of the drive was a very steep climb.

Once parked, we walked for 20-25 minutes to a perch along a ridge. Remember, all of this is happening in the dark using flashlights. [Note: the English call flashlights “torches”, but Nizer had an even better term. He called them “torchlighters”. The Camp Champions team applauds his terminology.]

As the sun rose, we realized that we were on a mountain ridge overlooking a vast panorama. To the left (the East) the sun would rise over a vast mountain range with seas of clouds making them occasionally look like islands. 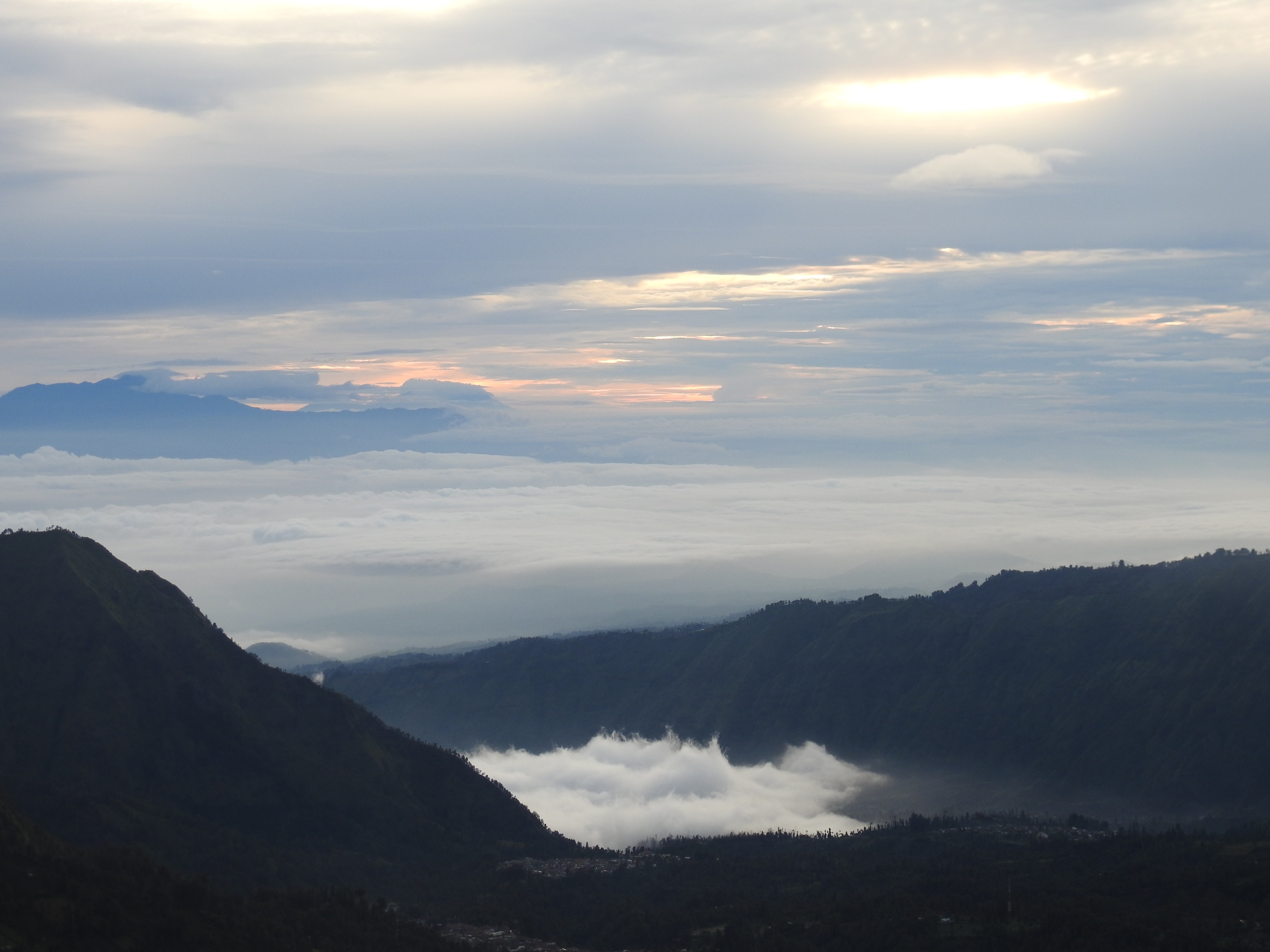 Directly below us was a small town perched on a ridge we would later recognize as the edge of a crater formed many years ago by a massive volcano. Our hotel, the Lava View”, was there. Nizer pointed it out to us – it was the one with the tacky red light. 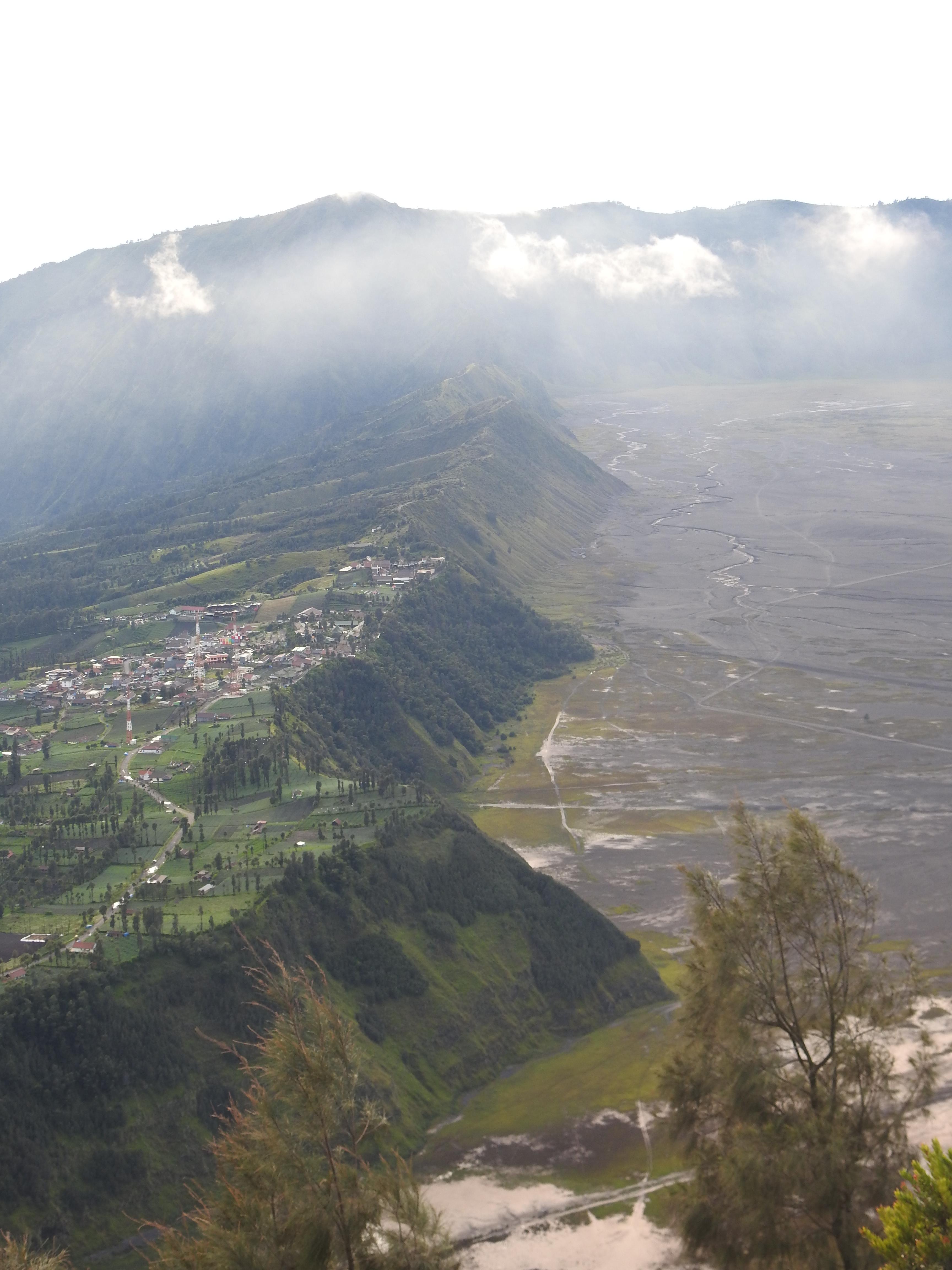 But the star of the show was in front or us and slightly to our right (South). We saw three calderas (cone-shaped mountains that were or are volcanoes). Closest to us was an inactive volcano that was a perfect cone. In the distance was the highest mountain in Java, a volcano that is still active. While I was still dark, we could see lights on its side – climbers striving to ascend the summit. The final 4 kilometers would take the fittest climber 6 hours because of the extreme steepness (40-50 degrees) and sandy/muddy terrain. When the light came up, we would see an occasional flume of smoke coming from the mountain. Finally, to the left of the dormant volcano was an active one. It had erupted last year and cleared out all the vegetation on it and on its neighbor. Since the eruption, some greenery had returned, but other parts remain denuded. Much of the landscape felt like a Martian landscape. 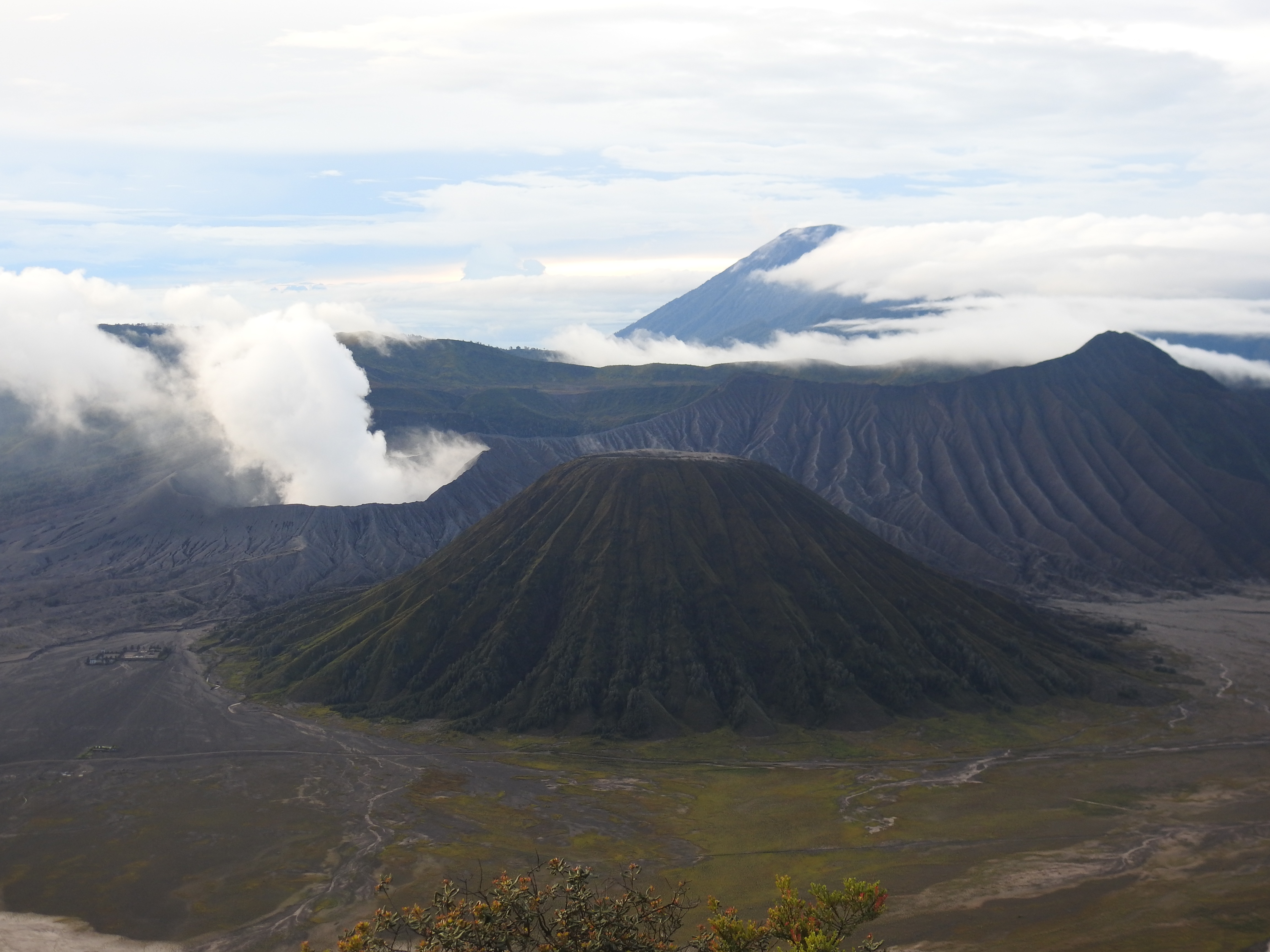 The two closest mountains rested inside the larger crater, like the children of the original volcano.

Seeing these massive features inside that crater made it clear how much Indonesia is changing geologically. Most places change very little and those modifications are all terribly slow – tectonic plates moving or water/wind erosion. But in this country of 146 active volcanoes, the mountains can measurably grow in a lifetime.

After we took our shots, we headed back down the mountain.

OK, we headed part-way down the mountain until our mini-crisis. [Note: there will be those that think I have buried the lead and that the following event should have starred in this blog. But since I look pretty idiotic and I also write the blog, it appears on page 2.]

When we packed at 3:15 before leaving, we knew we needed to bring water, cameras and extra clothes. My daypack has too much stuff in it and we usually use a smaller pack that Susie brought. Since I assumed we would be walking a fair amount, I offered to carry the pack. Susie was pleased with her gallant spouse (victory!), so I donned the pack and headed out the door.

When we arrived at our perch at 4:30, we found that industrious Javanese entrepreneurs were already there, ready to sell us coffee, tea and ramen noodles. I have failed to mention that the weather on this mountain was a marked change from our previous days. Of course, it was still humid, but it was now quite cold, perhaps 45-50 degrees and quite windy. After sweating like stuck pigs for a week, we were suddenly wearing multiple layers, wool hats and gloves. The humidity that had made high heat into an inescapable sauna was now inviting the cold to creep into our bones.

I started to take photos despite the cold. This process required that I take off my gloves and set down the backpack.

Did I mention the contents of the backpack? It was all of our cash, copies of our passports, Susie’s drivers license and assorted travel documents. Many travellers consider these to be “essential items”. I am one of them.

Oddly, I am also occasionally distracted. In this case, my efforts to capture the majesty of this site and stay warm provided the distraction.

Back to our narrative.

We were heading down the ridge. After 10 minutes, Susie casually said, “You do have the backpack, right?”

At times, the horror of a mistake will hit you like a lightning bolt. Other times it slowly burrows into your consciousness. The moment was one of the latter cases, leading to my helpful and insightful response:

She did not say anything. She just inhaled briefly and became completely silent. It was only then that I realized I had failed.

We asked the driver to honk at the lead jeep (that had the oldest trio, the other driver and our guide) so that we could turn around. We learned something in that moment. Talking insistently with a whiff of panic does not suddenly enable an Indonesia into an English speaker. Nope. Our slightly desperate gesticulations did not help much either.

He stopped the car. But we did not want him to stop the car. We wanted to keep the family together and also get Nizer to help us go back up and search.

To be honest, I am unsure what combination of gestures, words, grunts or pointing did the trick, but he eventually understood. He caught up to the other jeep, honked and they stopped.

Nizer jumped into our jeep and we went back up.

I will resist a philosophical treatise on the perception of time (you are welcome.), but I will tell you that somehow it changes when you think you are on the verge of losing both your travel money and your top-companion’s happy disposition. The drive down felt like 3-4 minutes. The return ascent felt like the exact same length of a Wagnerian opera.

When we arrived, Nizer and I started to run. Judging by the looks we got, I suspect that our industrious Indonesian entrepreneurs had never seen a Westerner run before. Or, at the very least, never seen a grey-haired Westerner contemplating his marital status run.

When we reached our spot, one of Nizer’s friends heard his question and pointed to exactly where the backpack had been for the last hour.

I had avoided the doghouse.

To be honest, I suspected that we would find it there. We had been friendly with everyone at our perch during that hour. Further, we have found the Javanese to be honest people. But suspicion is not knowledge, so my relief was real.

We then went to the crater and walked up to the edge of the active volcano. Please allow me to share one disappointing fact and three other tidbits.

The disappointing fact is that an “active” volcano is not an “erupting” volcano. Active means that the volcano might erupt as some point. An active volcano will steam, burp smoke and perhaps have some bubbling mud or water. So if you have read this far waiting for pictures of flowing lava, please accept my apologies.

Our volcano was actively spewing gas, but it did so in erratic patterns. Within the smoke were minor bursts of black smoke within the main white cloud, creating mesmerizing rivulets that evoke a lava lamp. Once we noticed this affect, we watched it for 15-20 minutes. We might still be there were it not for the changing wind patterns that eventually blew the sulphurous cloud toward us. 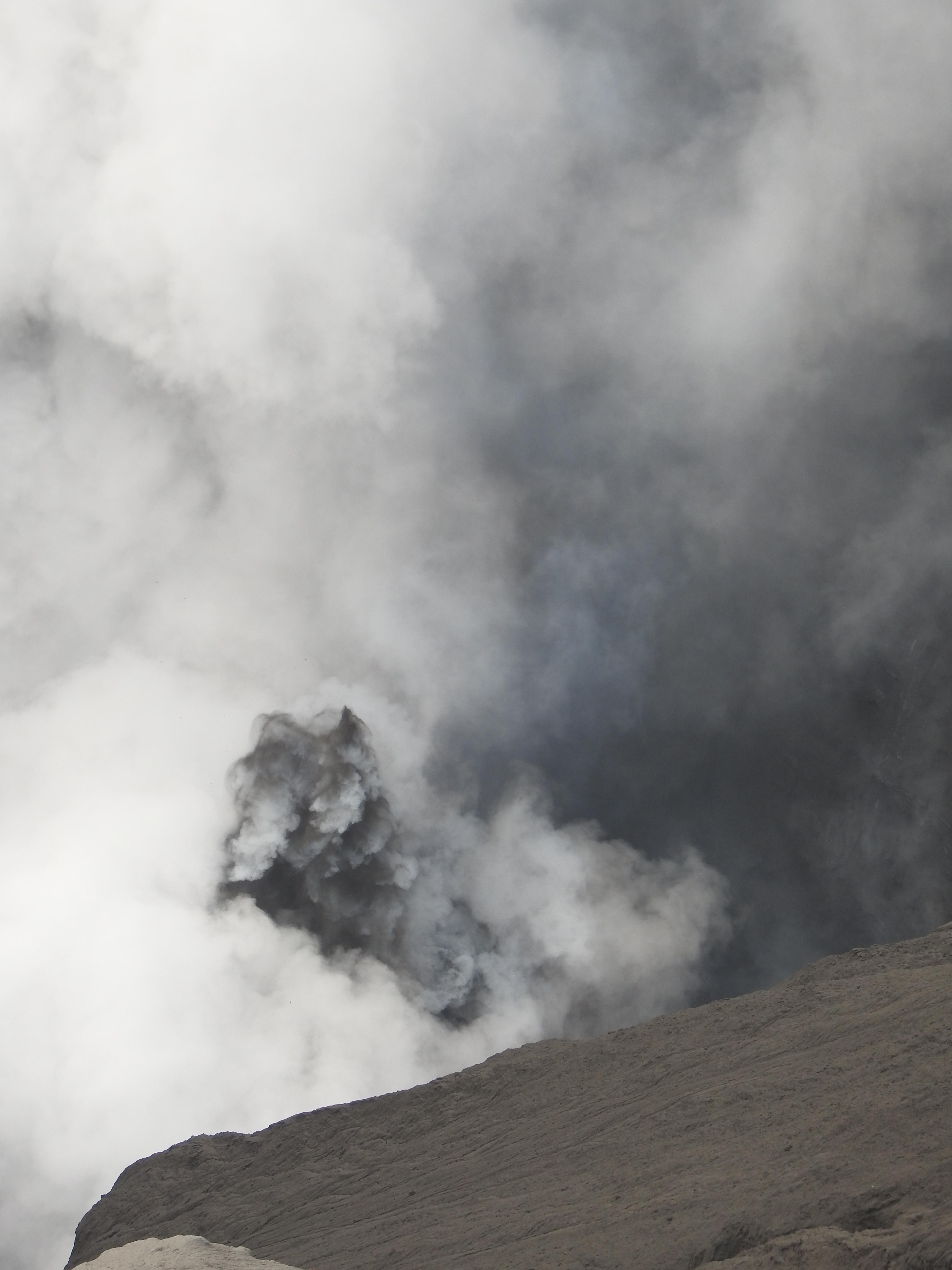 Tidbit#1: the walk up the volcano spawned a previously unseen vendor: the horse wrangler. The walk up the mountain is not excruciating, but it does require good physical conditioning. It is roughly 1 mile (all uphill) with 240 steps at the end. Many of our fellow travellers were more likely to have a pack of cigarettes than a gym membership, so they were ready for some equestrian help. That is not particularly interesting. What was fun to watch was the way that small herds of horses and their riders would follow approaching jeeps like seagulls following a shrimp trawler. 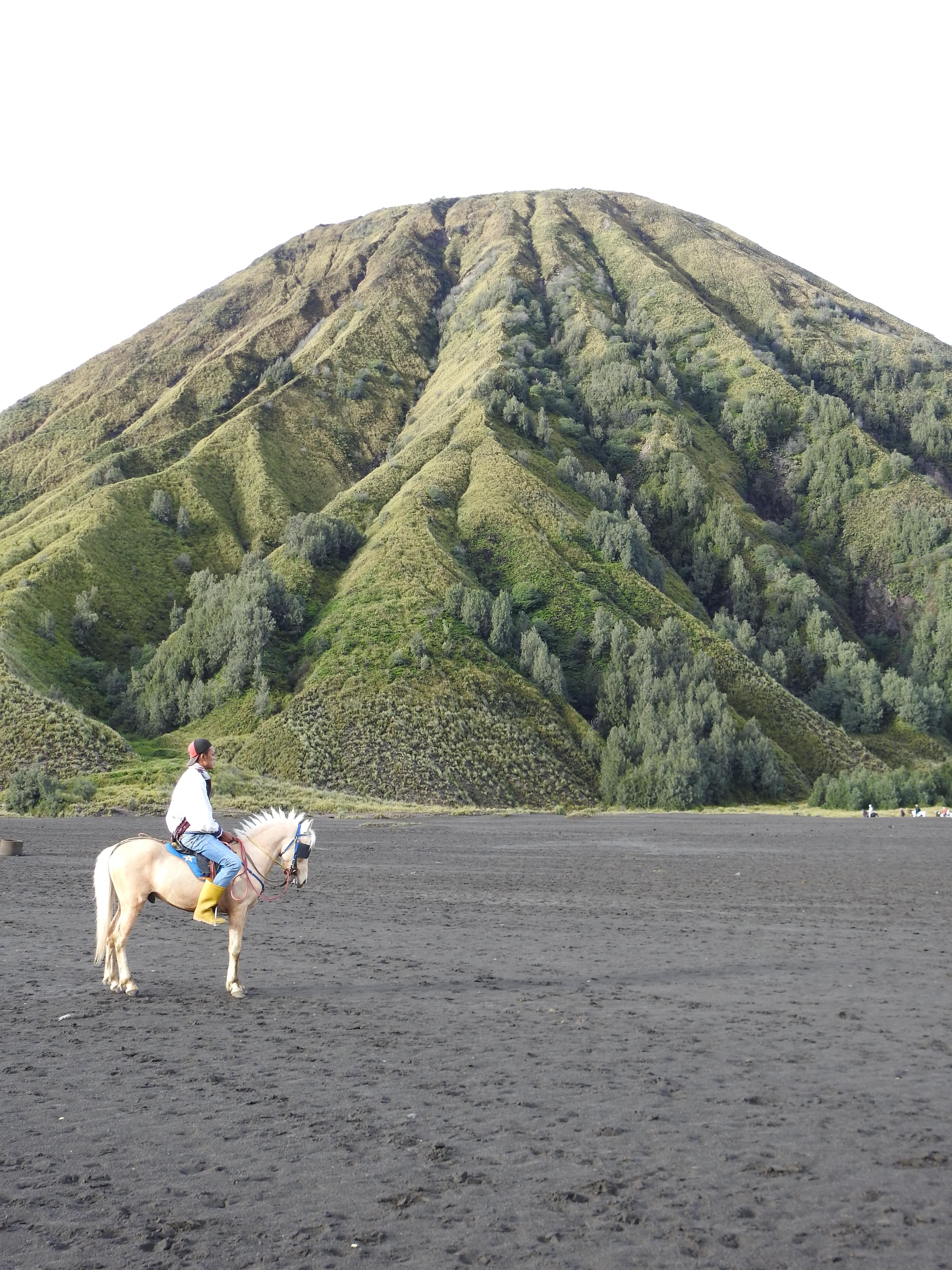 When we parked, I had no fewer than 6 men suggest that I take a ride. [Note: they were far less likely to ask the boys. My youthful self-image took offense at this. Had they not seen the athletic way I dashed to reclaim the backpack?]

Tidbit #2: The Javanese have a tradition of throwing offerings into the volcano. On certain holidays, huge swarms of locals will climb together and toss in something important to them. A fisherman might throw in a snapper, a farmer might choose a chicken. I wonder what an architect might toss. 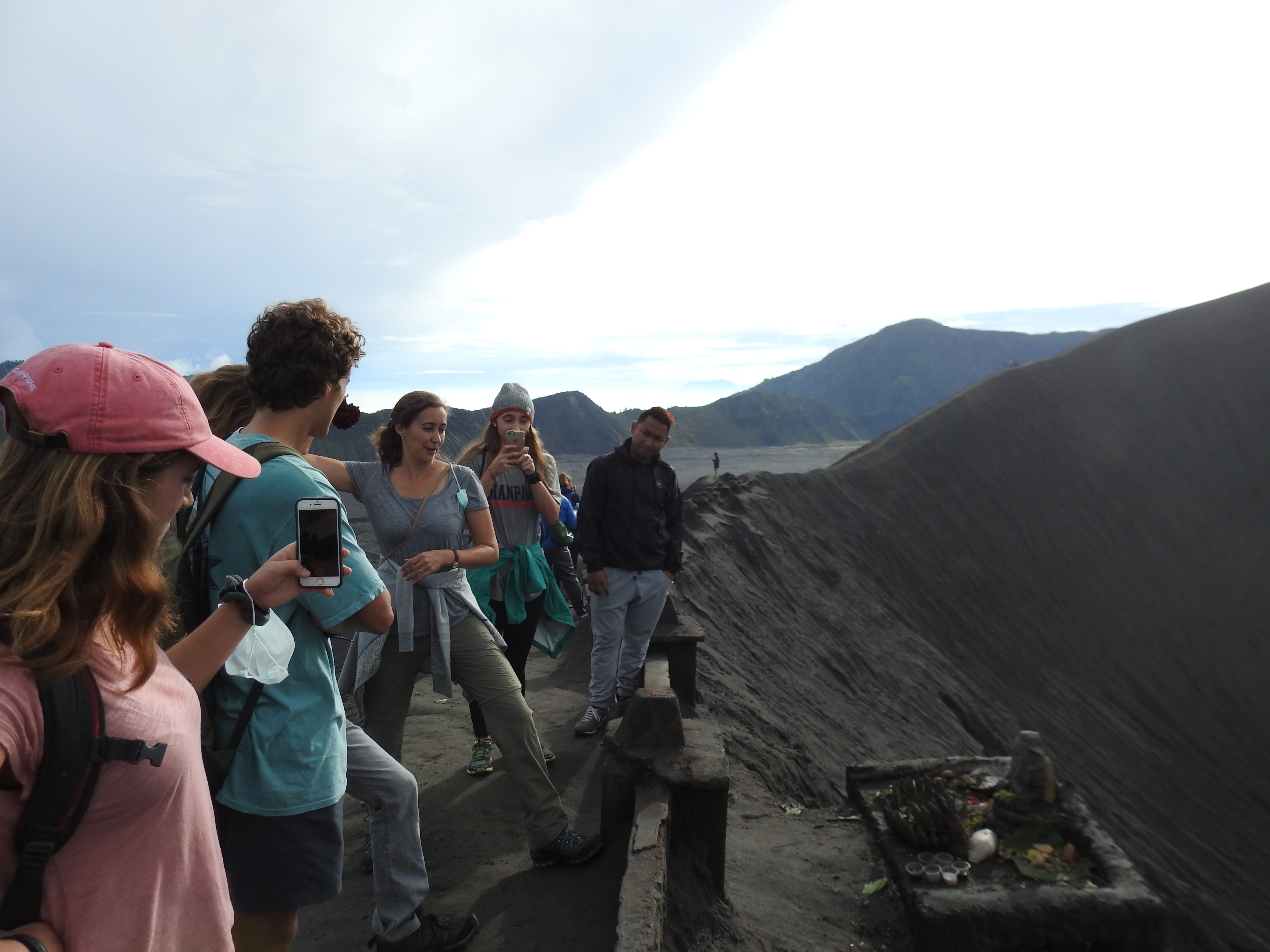 We bought a bouquet and Susie threw it in. We each made separate wishes, but I want Justin in New Jersey to know he was on the list!

Tidbit #3: When we walked up the mountain, we came across two attractive distractions. Some artistic souls had created sculptures in the packed soil. 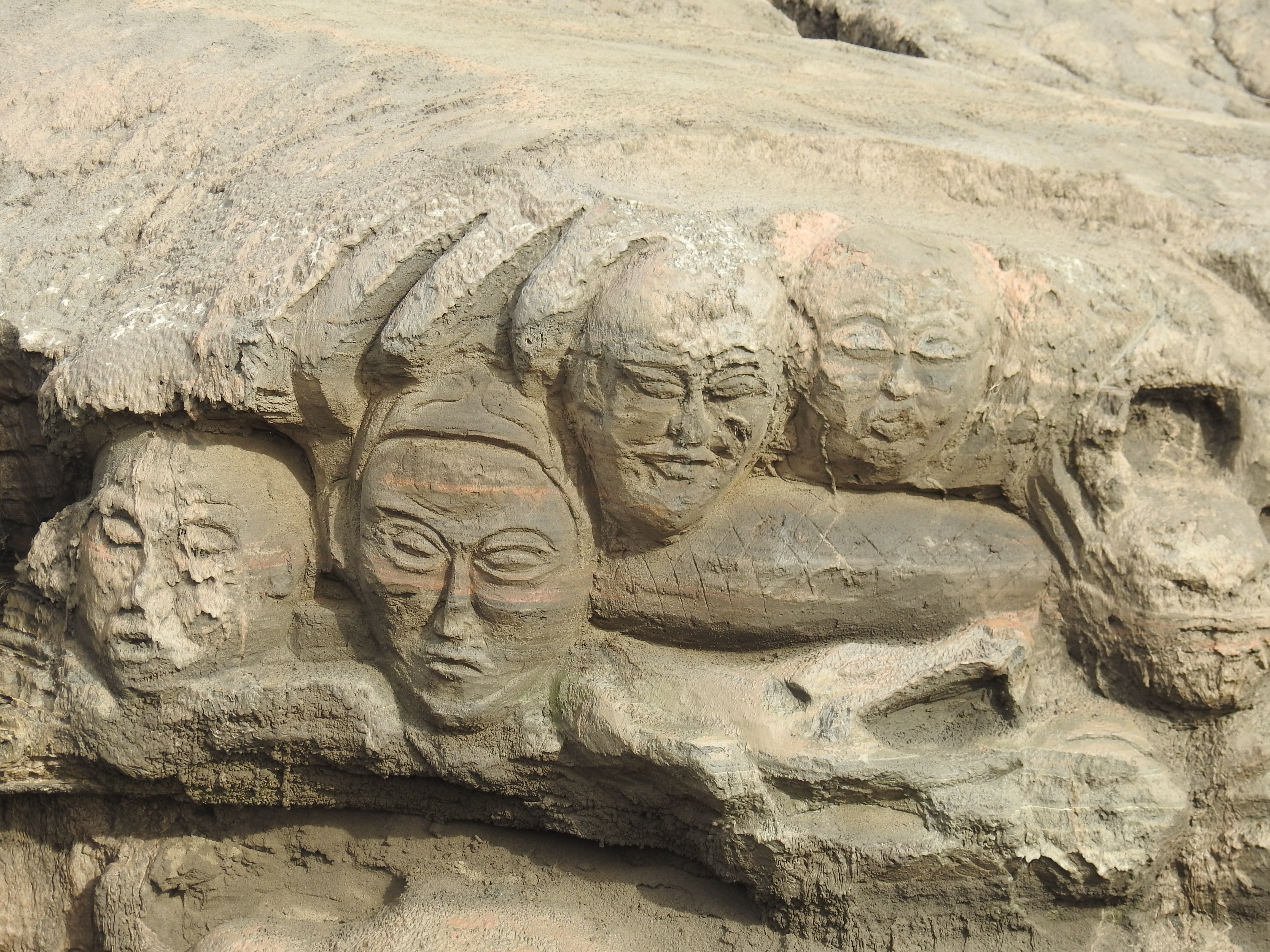 My favorite was the result of combining fine silt, ash and water. I call this Volcano Merengue. 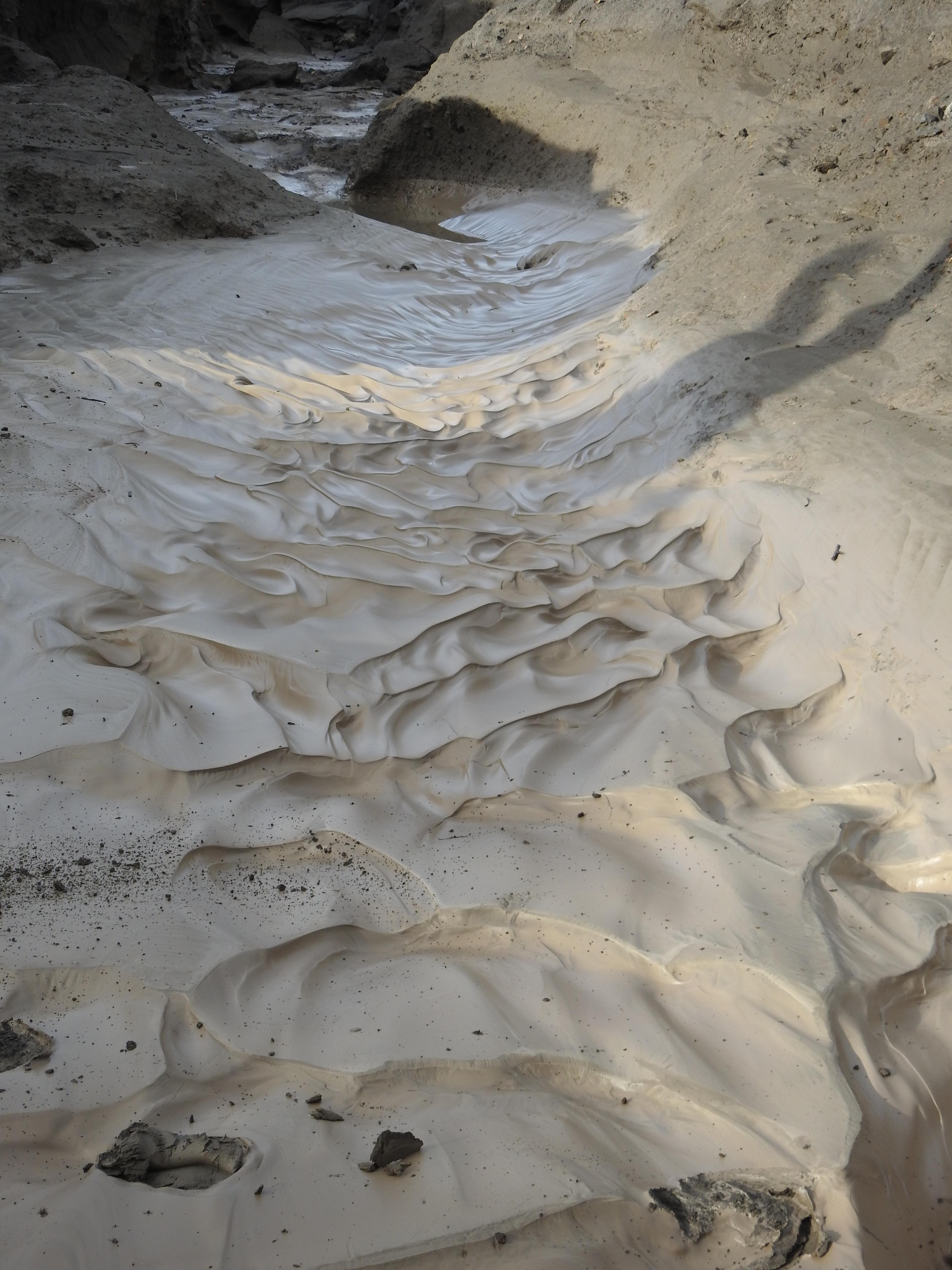