The Oddest Museum Ever

Today, I was gobsmacked.

Gobsmacked is my new favorite word. It means “utterly astonished”.   I remember hearing it when I lived in London 30 years ago, but had forgotten it. It came back to me in this sentence, “the Wild Oats XI team was gobsmacked at the failure of their hydraulics” that cost them the Sydney Hobart race. [Note: Wild Oats had won 9 of 10 races until last year. Think of them like the New York Yankees of the 1920’s. Last year, however, their mainsail ripped and they had to retire. This year was meant to be their redemption and they had another failure, leading to the gobsmacking of the team.] 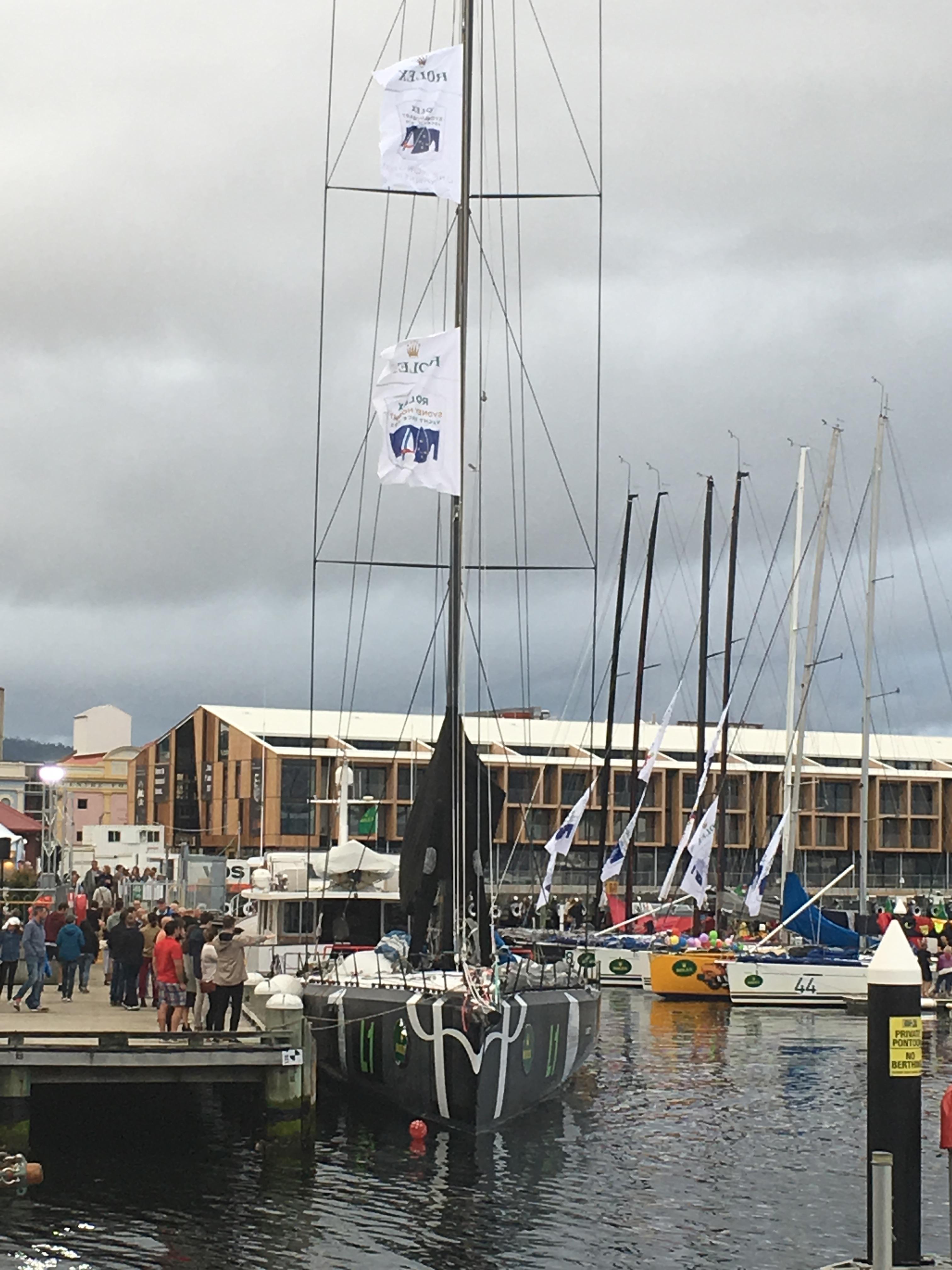 Here is the race winner - assumedly not gobsmacked.

With that explained, allow me to explain the source of my utter astonishment: the Museum of New and Old Art, or MONA.

Yet it sports perhaps the oddest and most unusual museum I have ever seen.   The MONA is the product of the mind and wealth of David Walsh, a genius mathematician whose fortune came from professional gambling. Apparently, he worked out a series of algorithms that enabled him to beat major casinos.

[Note: the museum is not really even in Hobart, but 20 minutes away.  Many people get there via a pair of camo-painted ferries that run between the city and the museum.]

A native Tasmanian, he wanted to create something to give back to his community.

The MONA was born.

It cost over $55 million to build and houses an art collection that is worth somewhere between $25mm and zero. Let me be clear, his tastes are weird. Not kinda weird, but amazingly weird. He seems fascinated with death and sex, but other topics as well. One room contains (I am not making this up) a 30 foot long series of tubes, vessels and machines that effectively replicate that human digestive system. It is “fed” twice a day and it creates wasted once each day at 2PM (we chose to miss this). 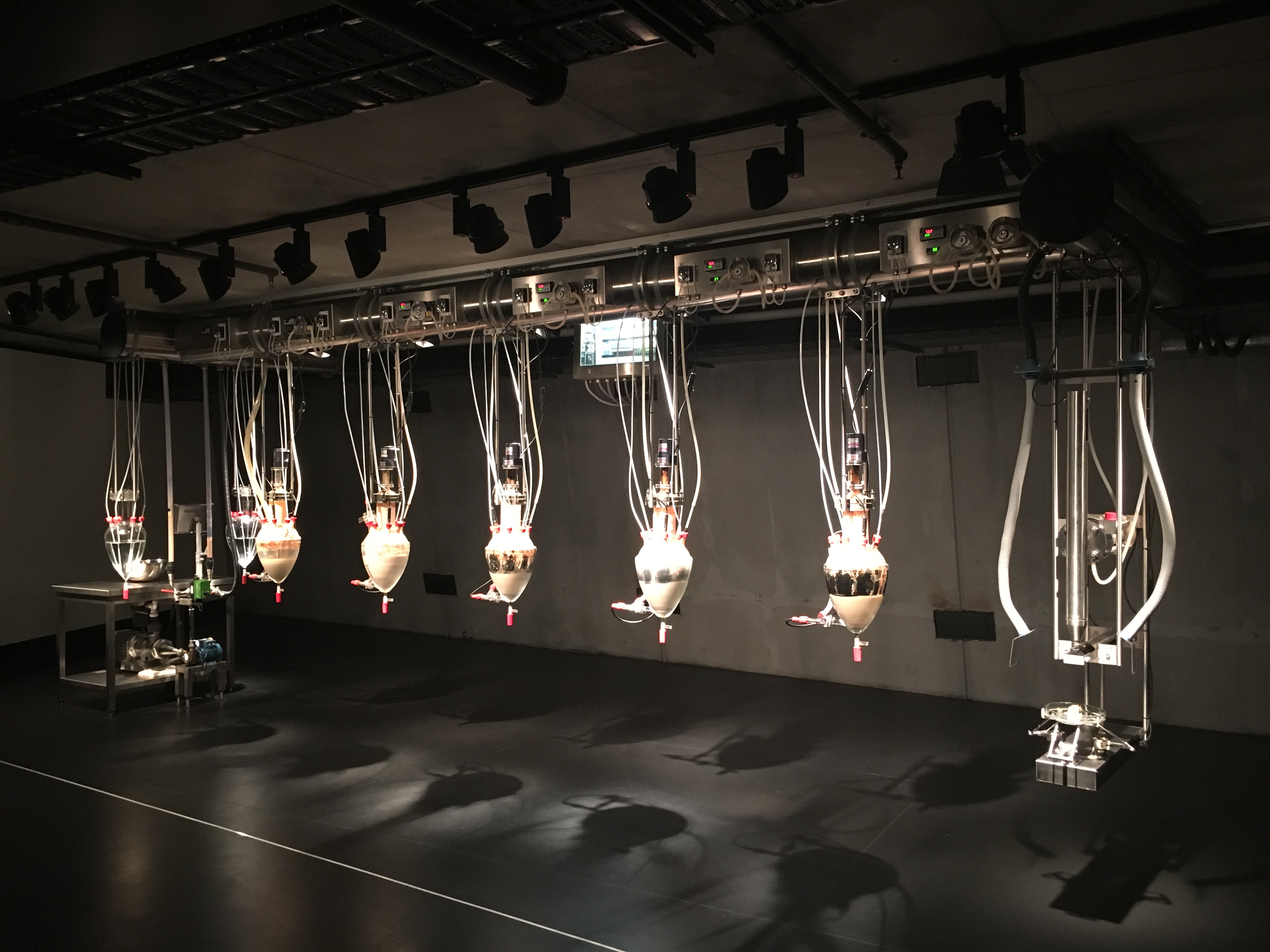 They have a man who has agreed to have his entire body tattooed and then leave his skin to the museum when he dies. He sits happily as an exhibit. 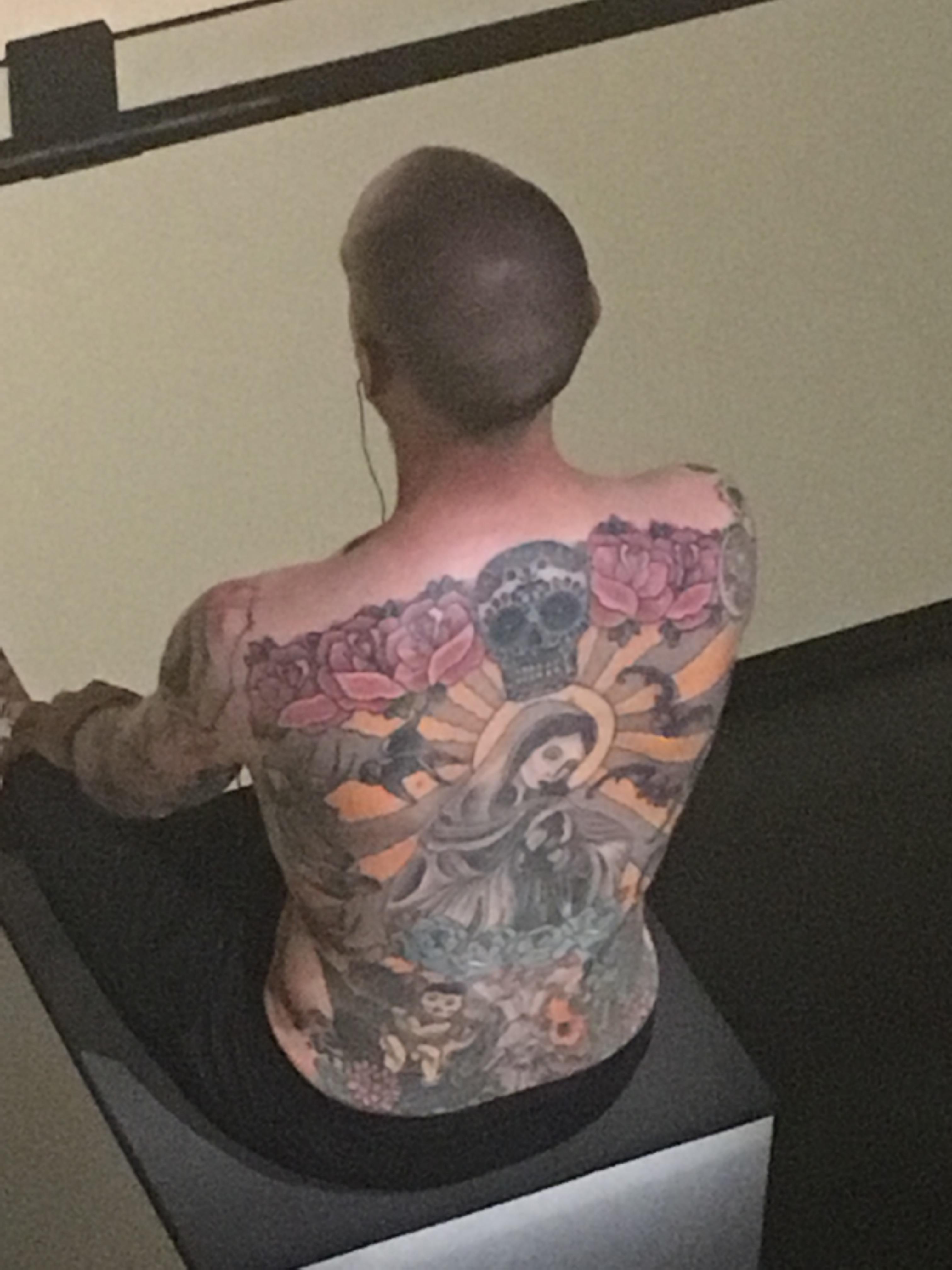 His name is Tim. 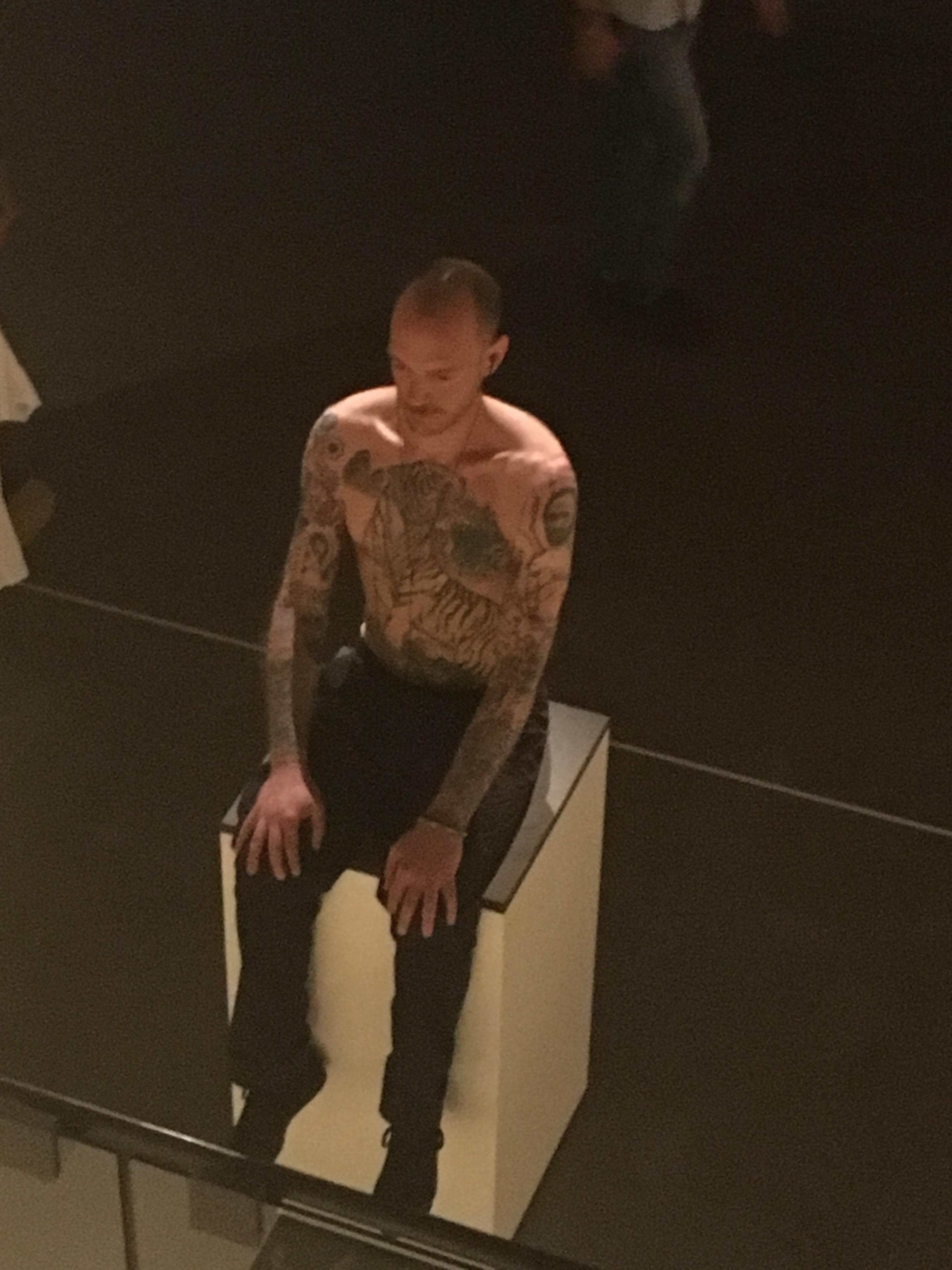 They have a truly creative piece that spurts words (the most Googled words of the day in Australia) using water every 2-3 seconds.  Here is a sample. 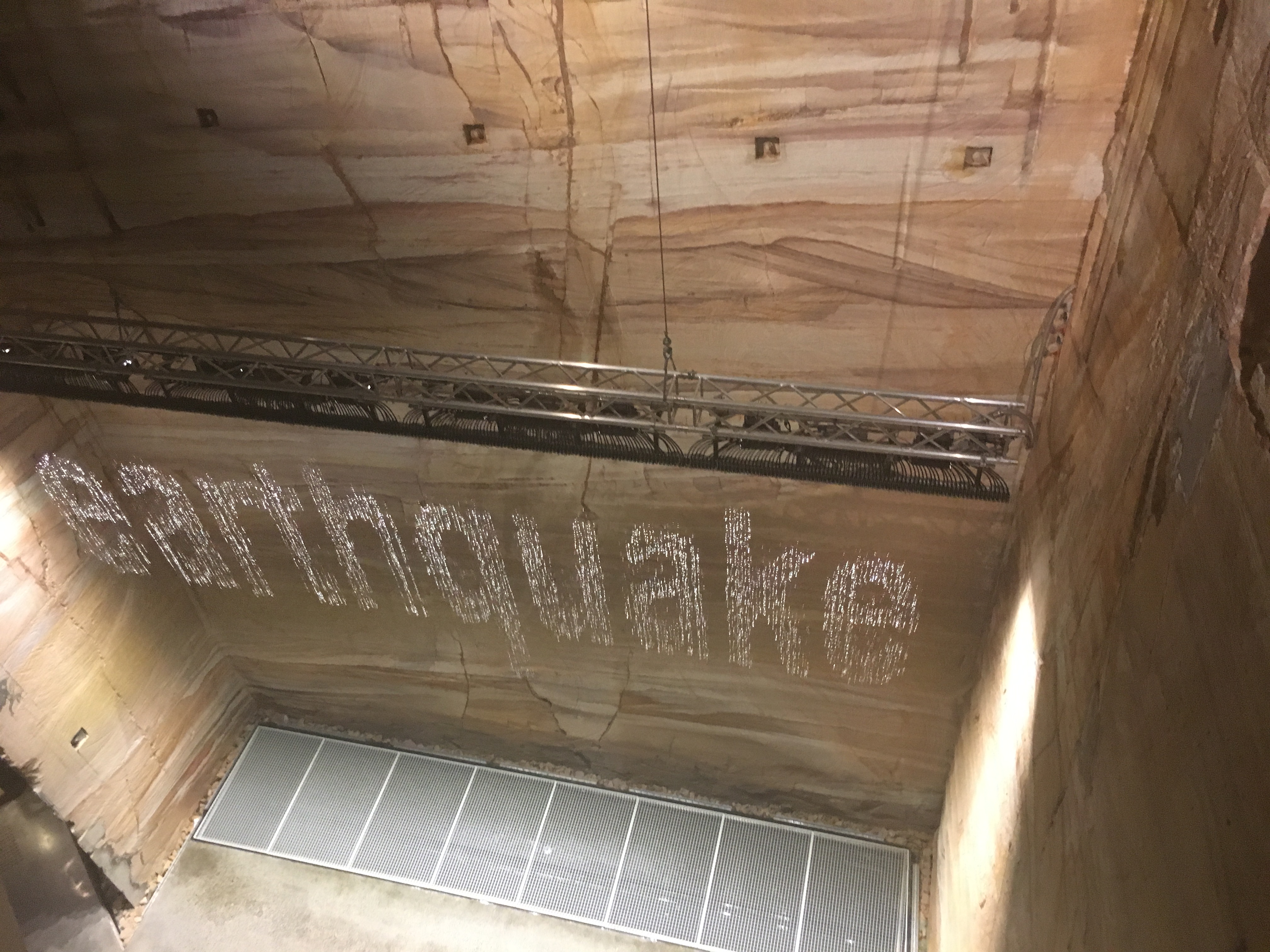 It has fat Porsches, coole hats and goldfish-with-knives (no, it does not make sense to me either). 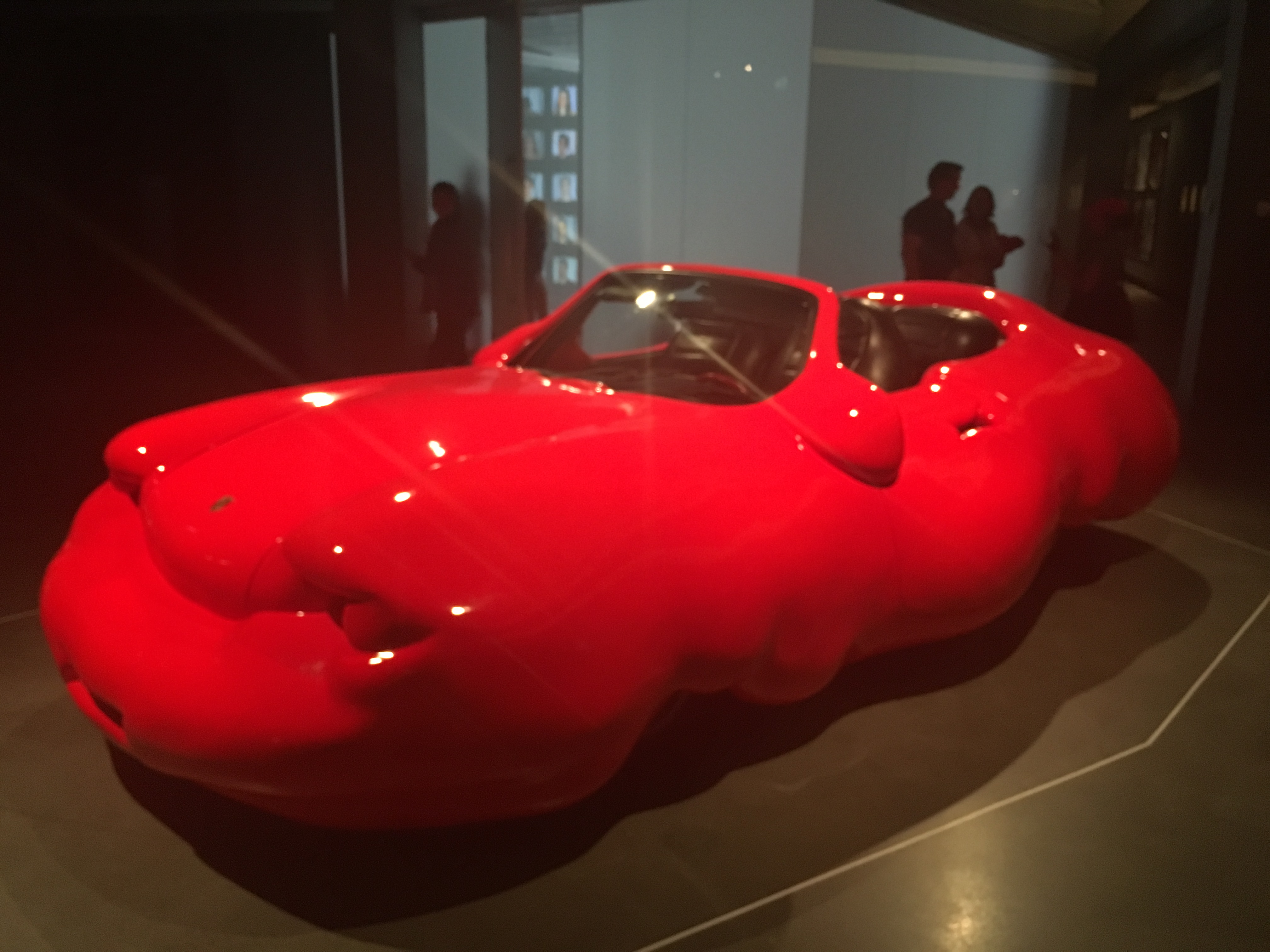 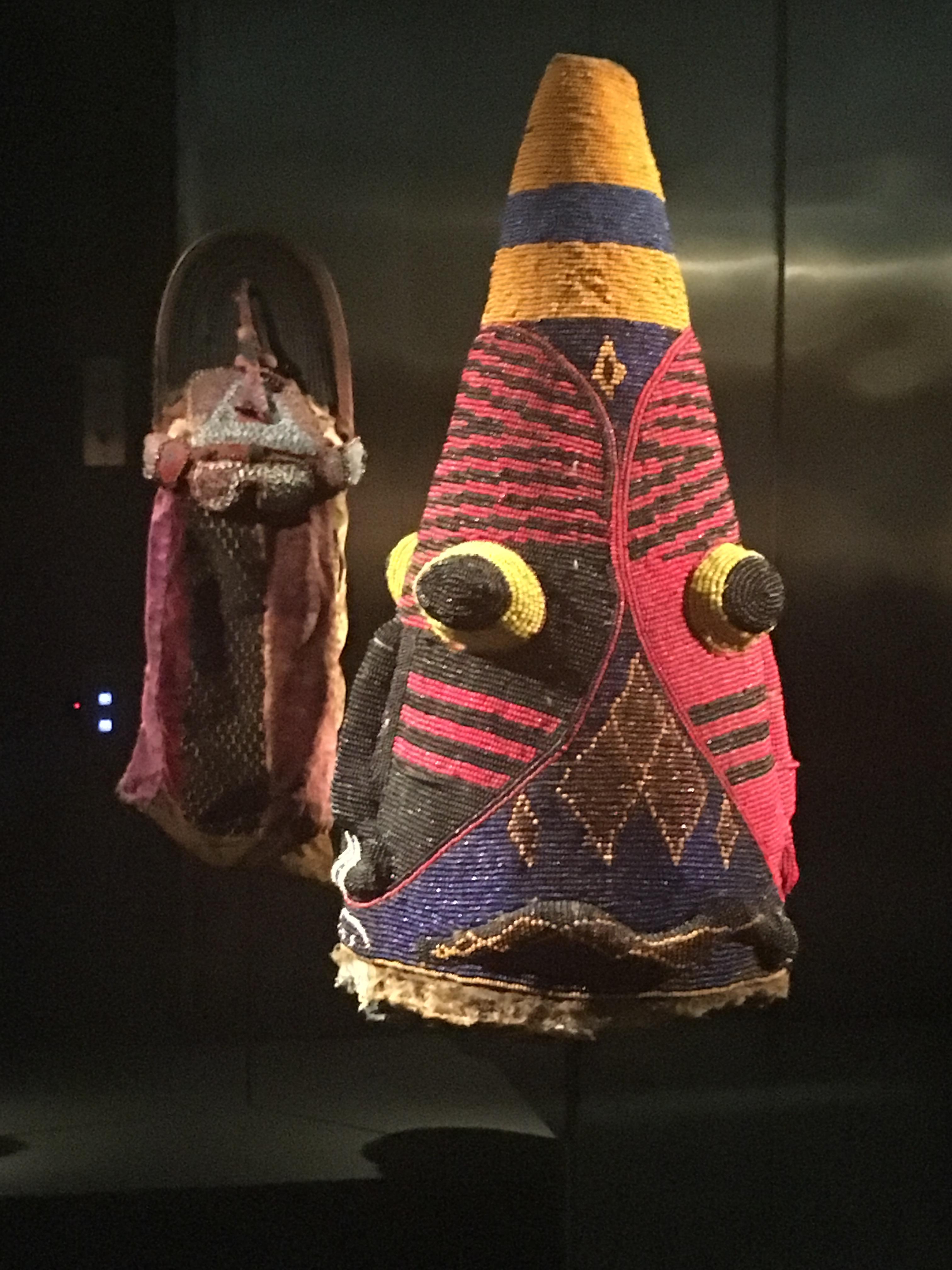 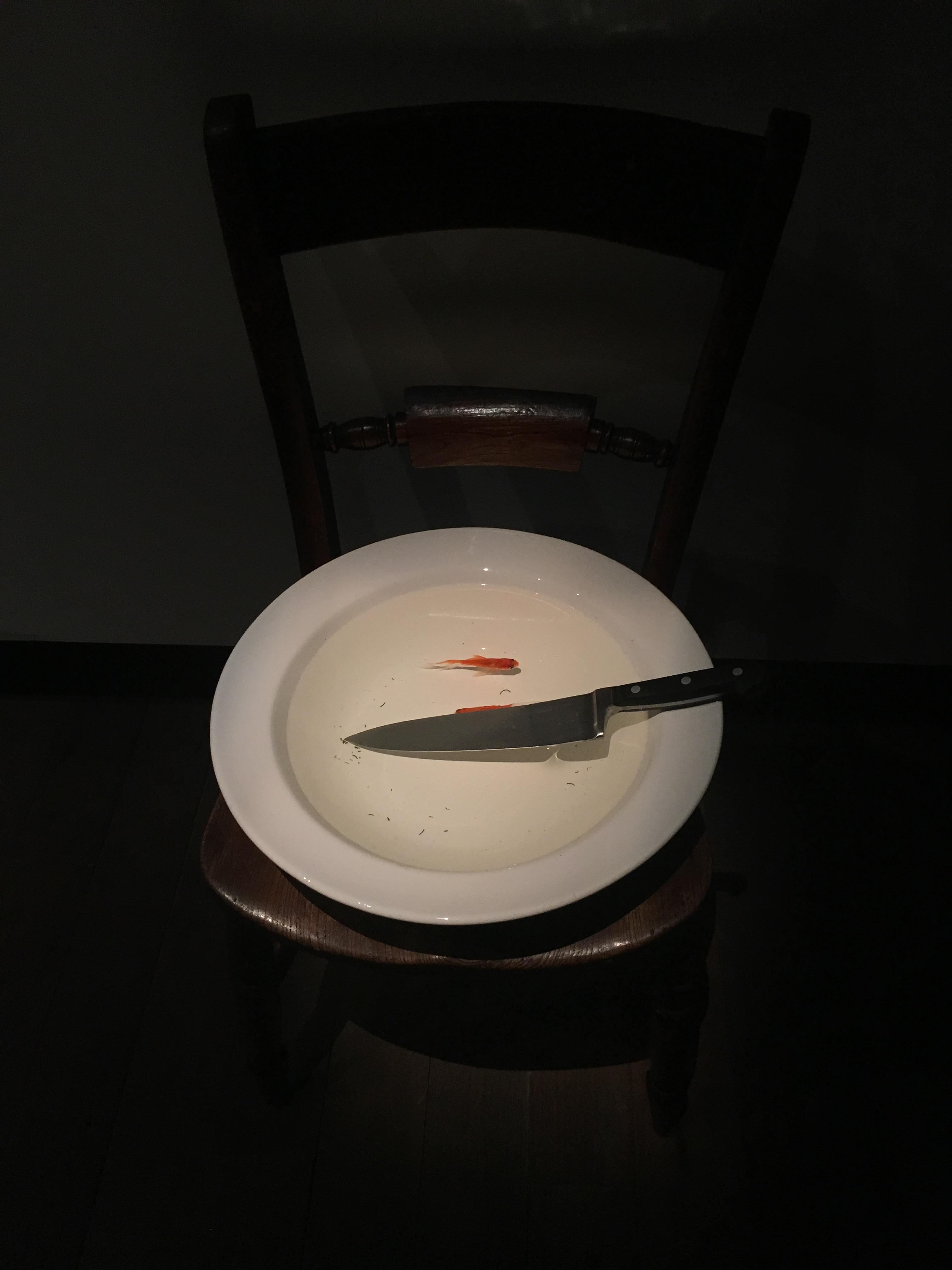 But the collection was not what impressed us. Instead, we were intrigued by the architecture itself and the temporary exhibition called the “Origin of Art”.

Let me start with the architecture. An article I read described it this way, “At this point, MONA begins to feel like a mash-up of the lost city of Petra and a late night out in Berlin. 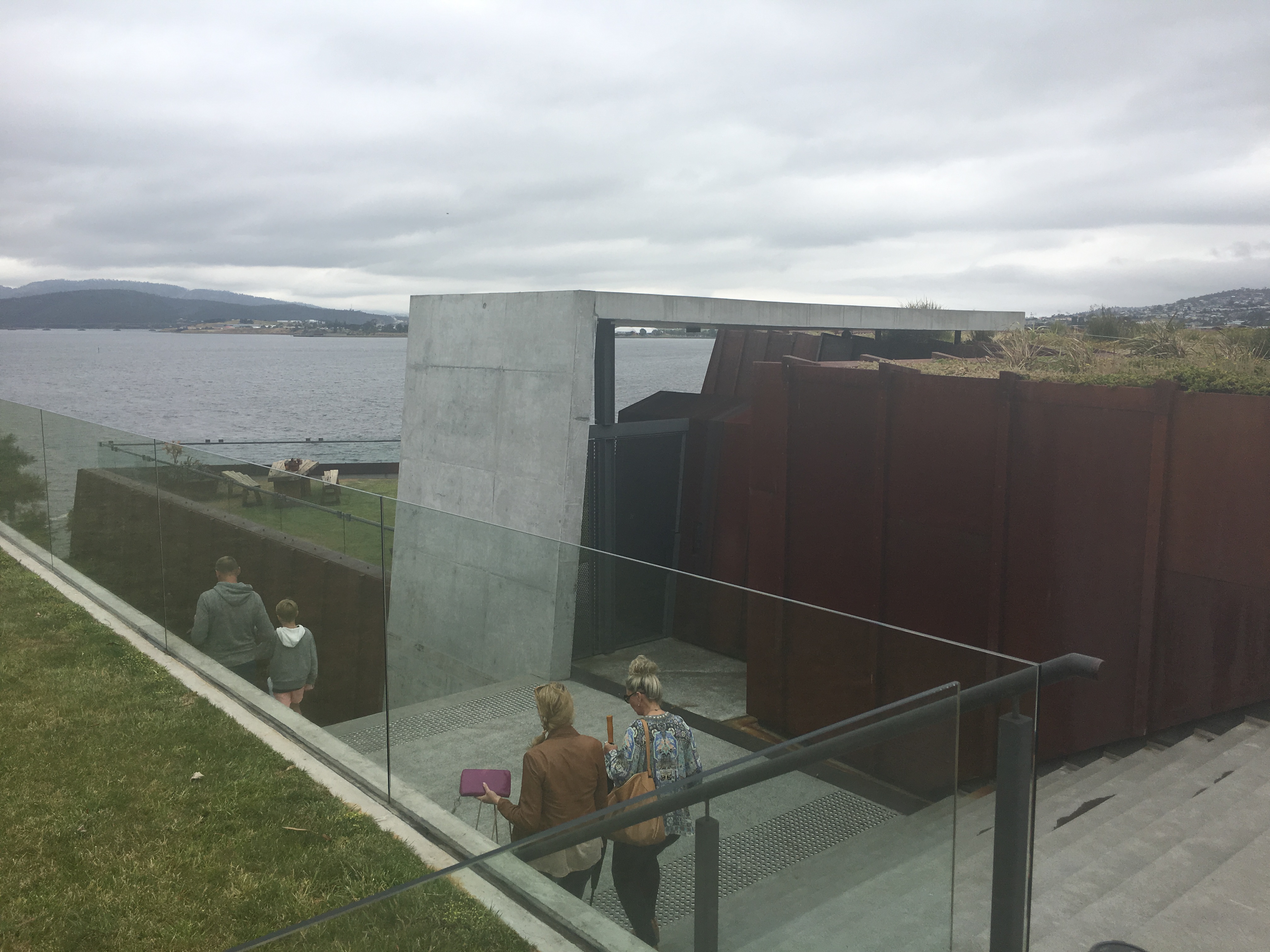 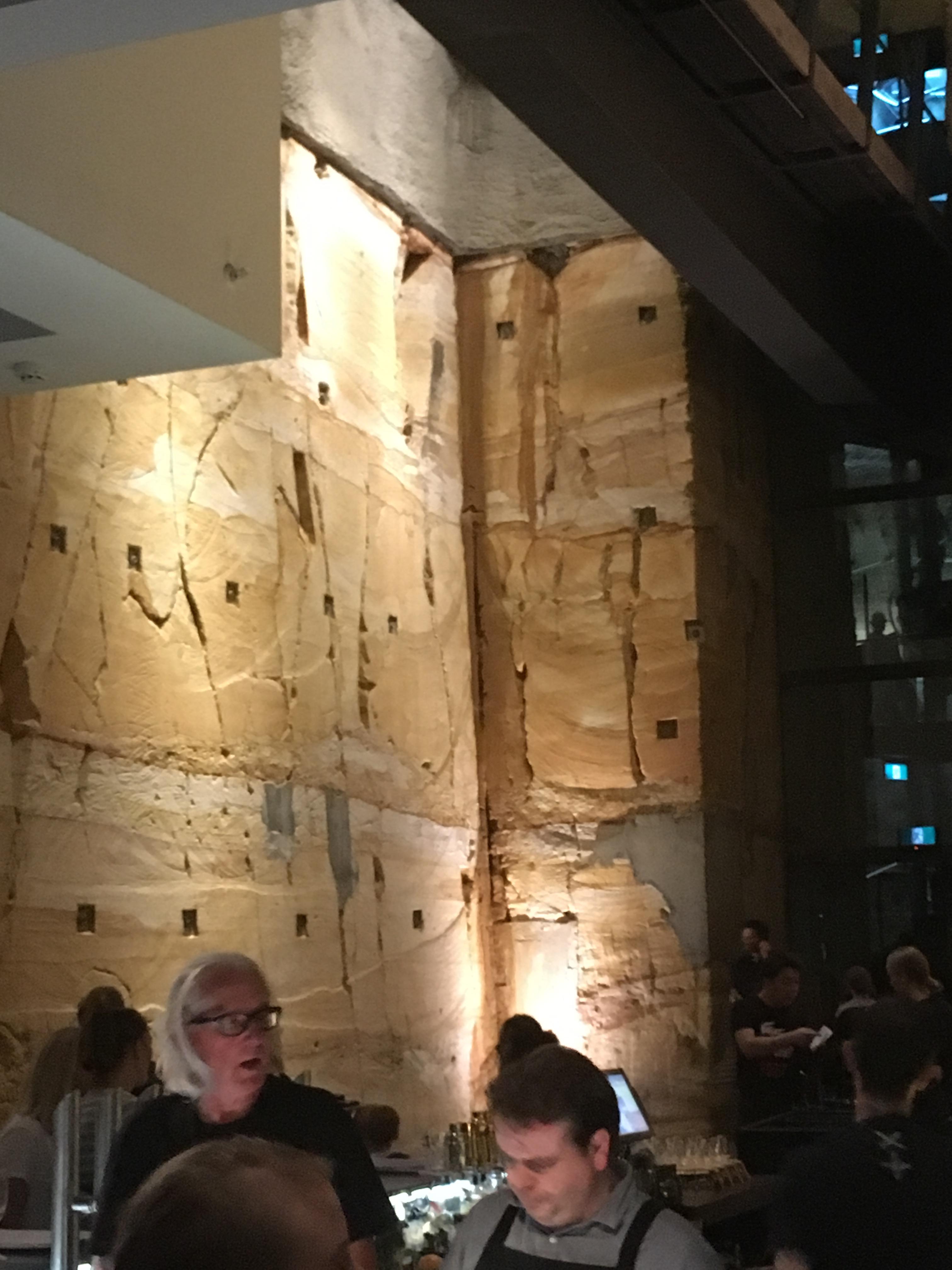 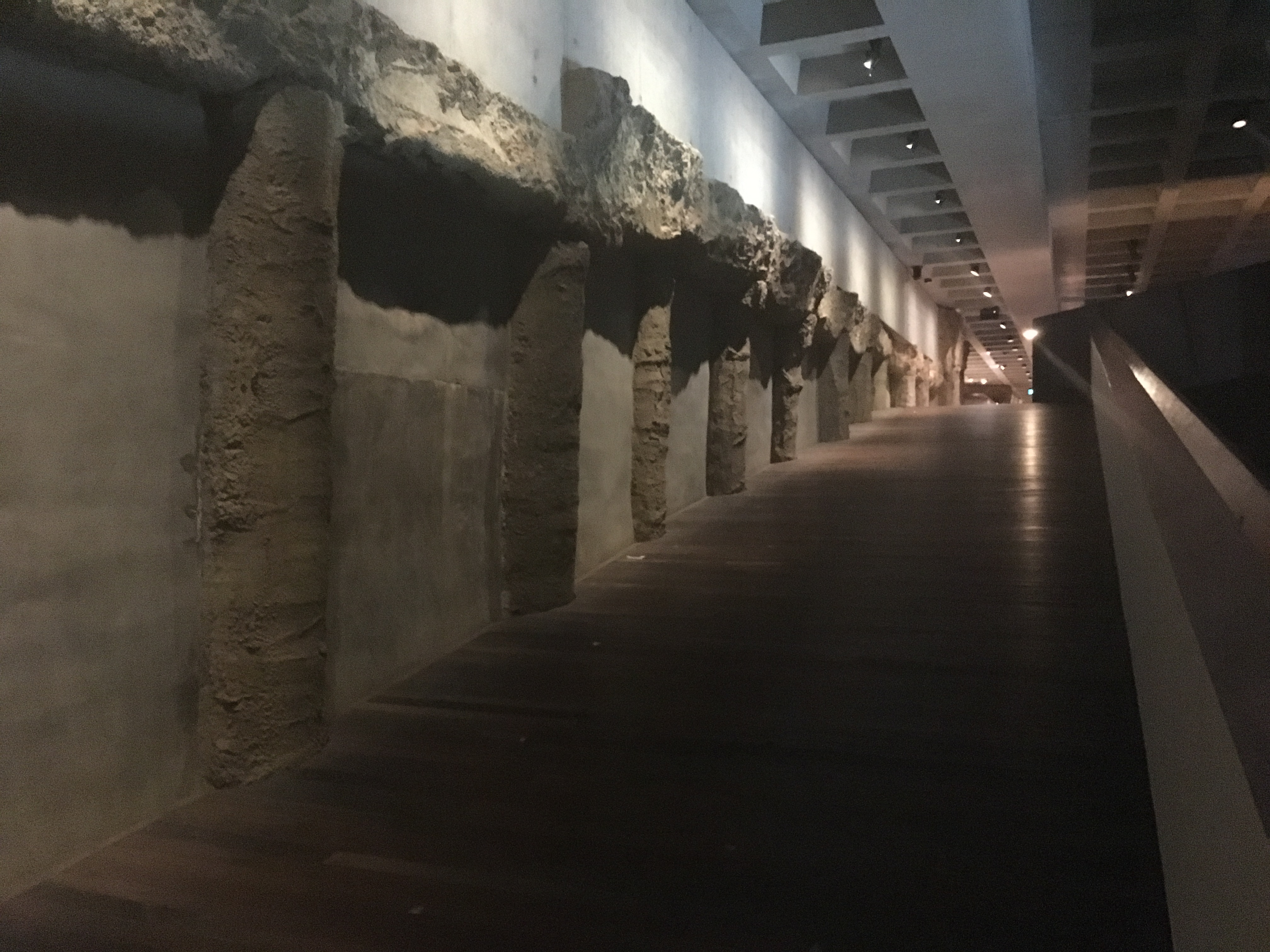 There is no grand staircase massive entrance. Instead, you enter a small door and descend 4 flights to the bottom of the museum. The top floor is at the ground. The rest is tunneled into the earth next to the river.   If you were an architect, this is the commission you dream of – a crazed gambler wanting to feature his bizarre art collection in unusual ways.

The exhibition featured 4 sections each curated by a different academic – three from the US and one from New Zealand. Each section attempted to explain a simple, but challenging question, “Why do humans make art?” The explanations are as follows:

The art in this exhibition was substantially more valuable than the rest of the collection, including a famous Renoir and some very substantive modern pieces.

But our favorites were not always the most familiar, but the most intriguing.

This installation helped make the argument that “Art is about cool patterns.” 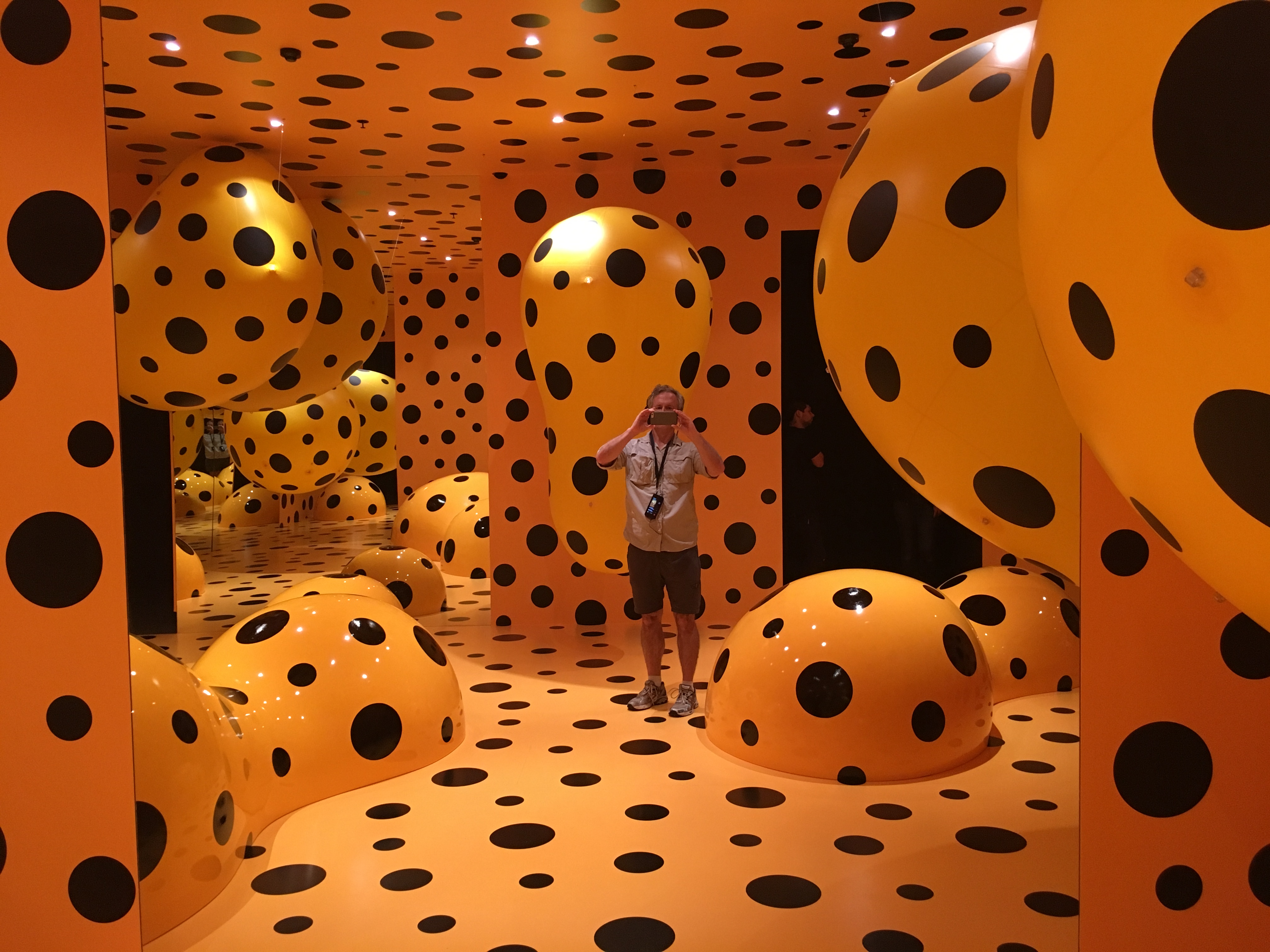 OK, the next one is not really a favorite (way too dark to be liked), but it IS effective.  Susie calls it “Hell with a Slice of Lemon”. 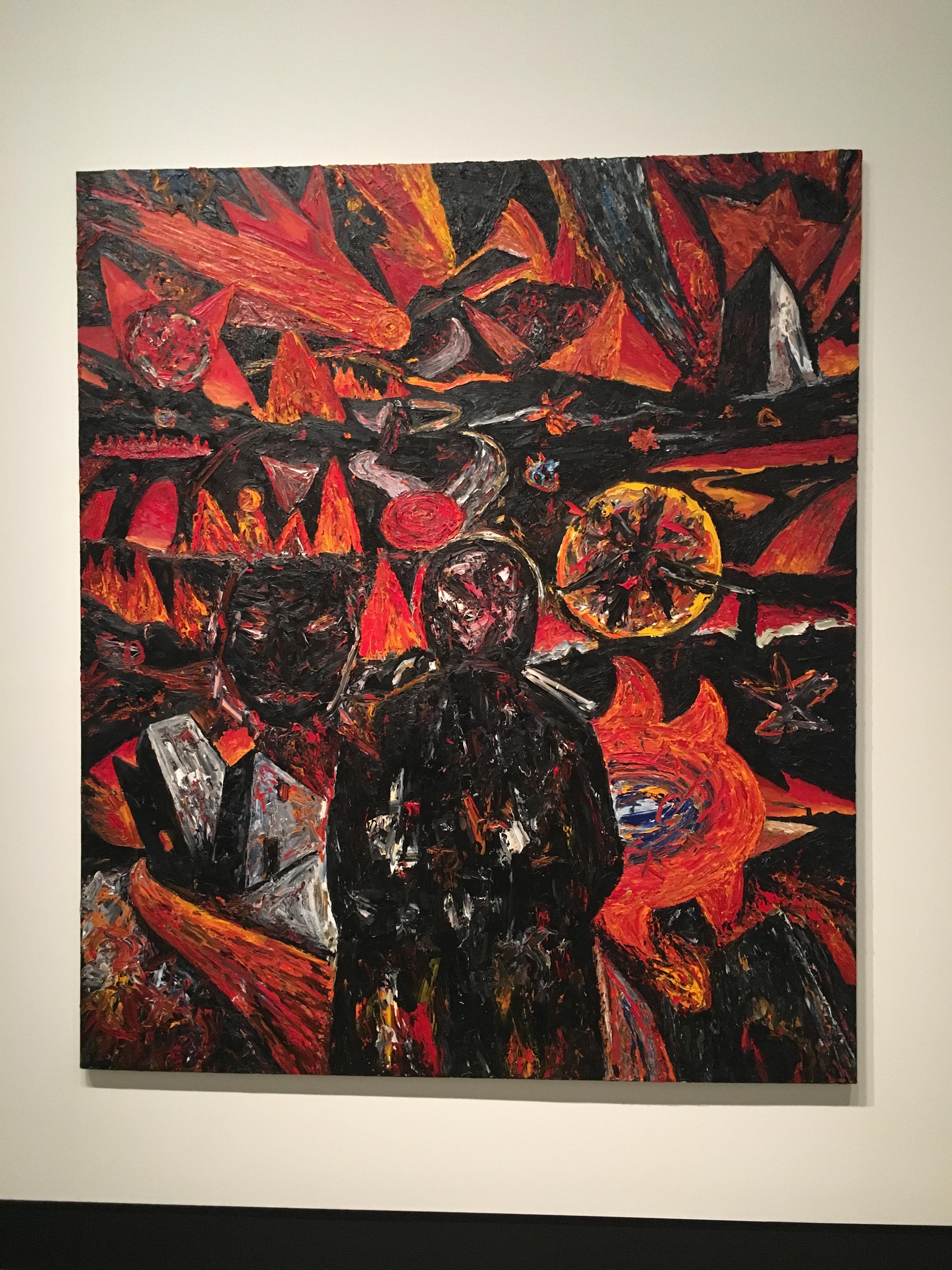 This is a real carpet done in the turkish style until it morphs into something that looks like melting candle wax.  The bottom part, however, continues to be a woven carpet. 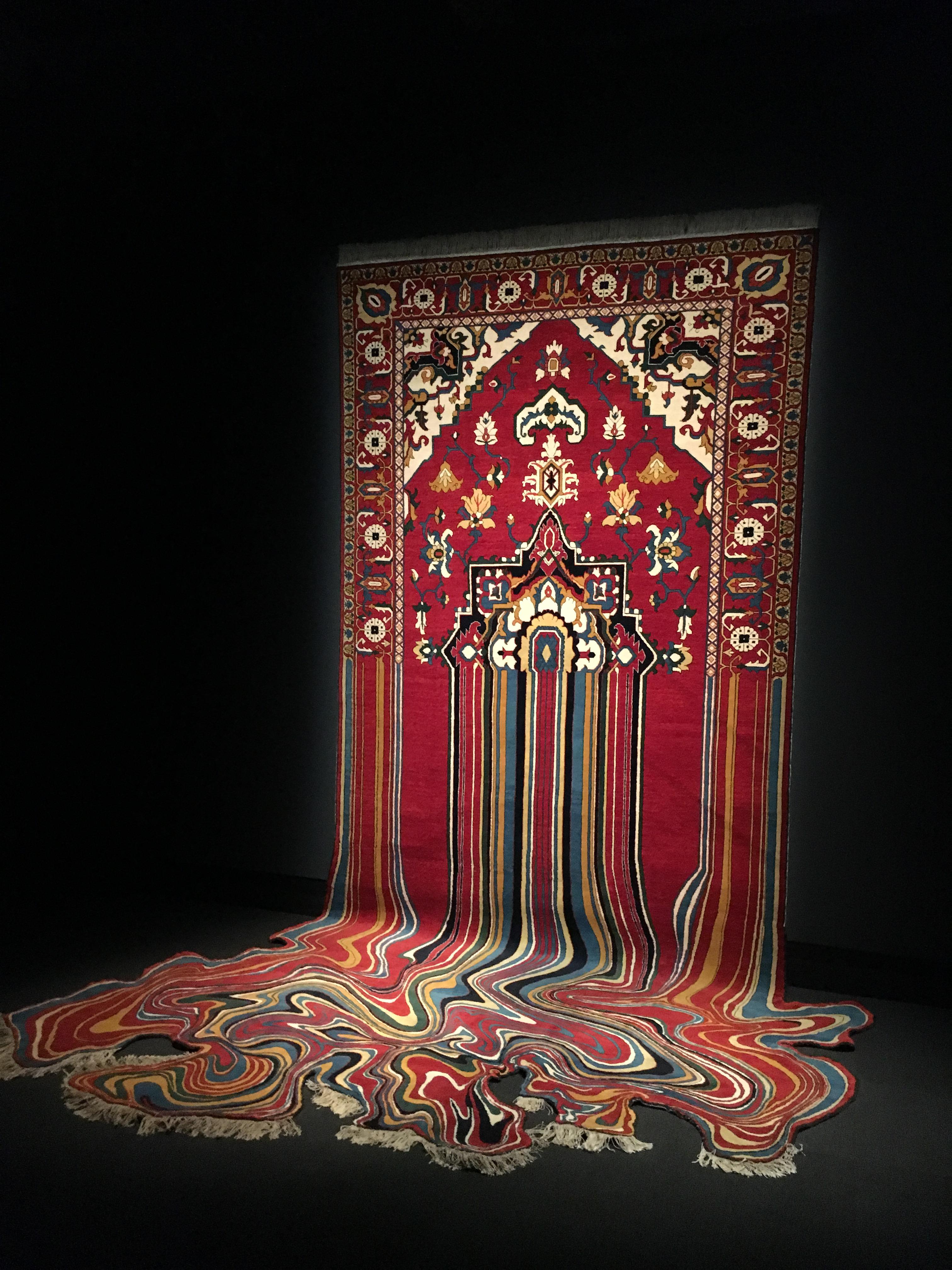 These dudes just seem to be hanging out. 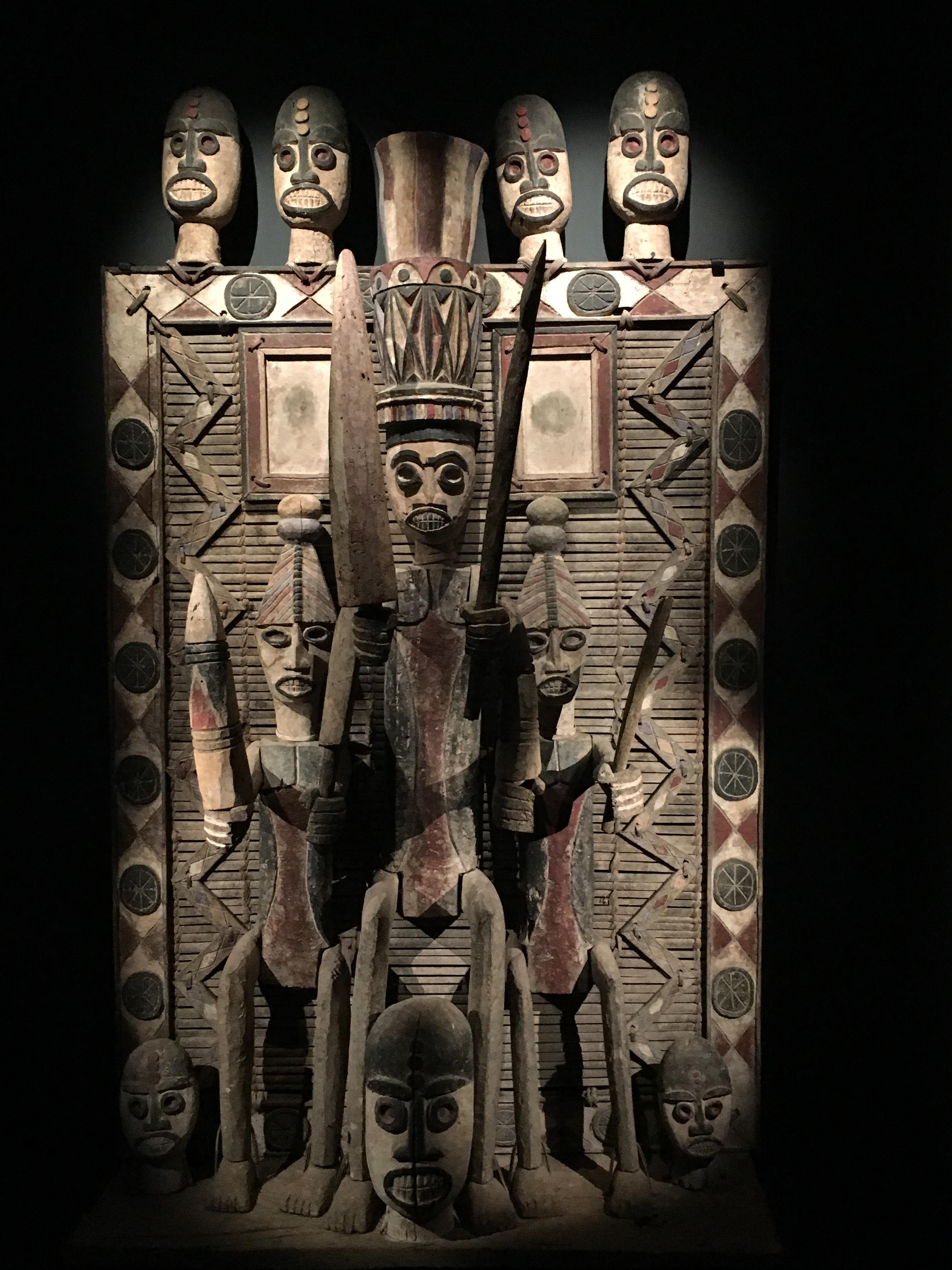 This piece is the “most viewed piece of non-western art”. 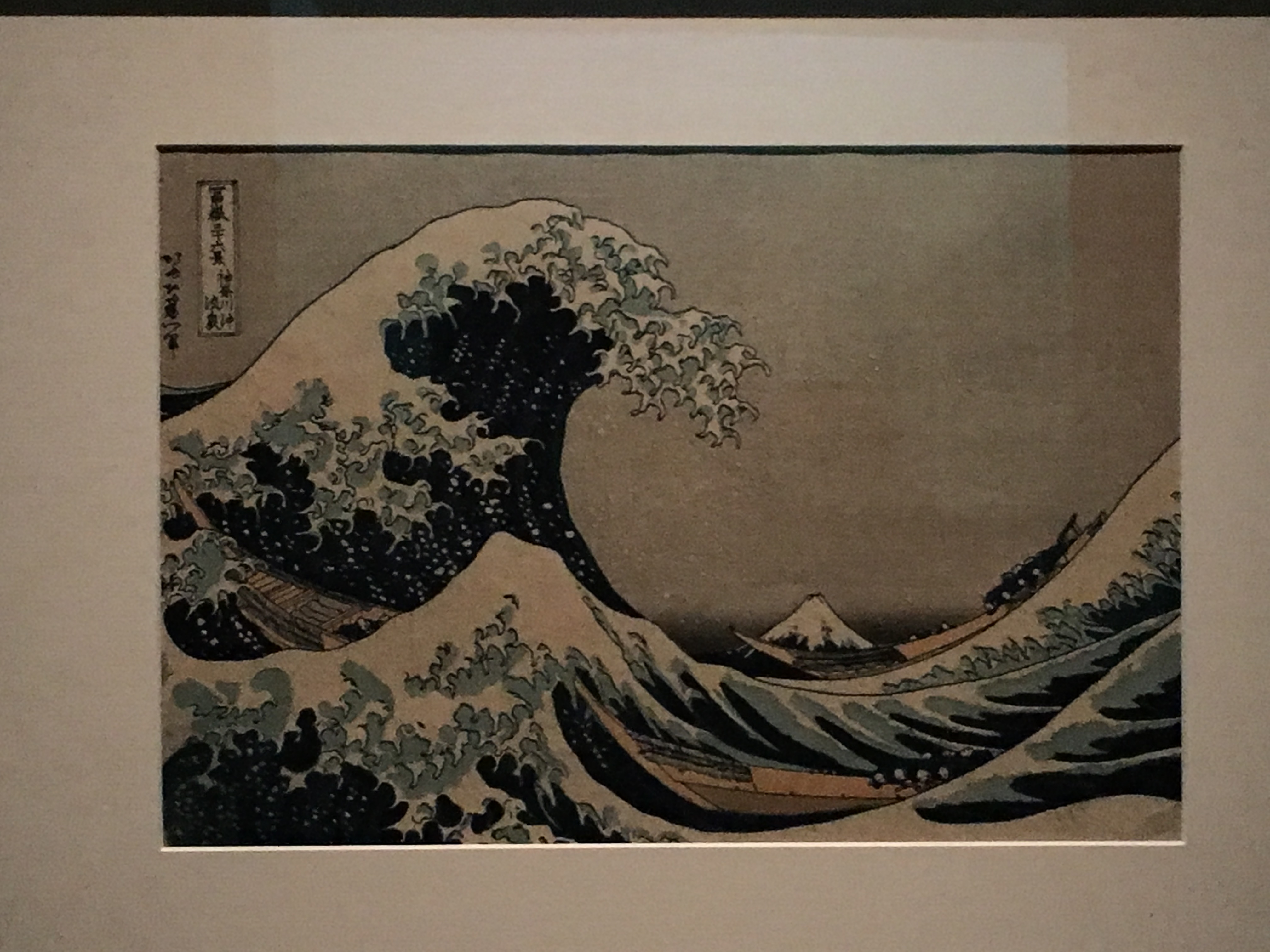 To be clear, some of the works were quite shocking, but it found the different theories incredibly thought-provoking. While I always love visiting museums, it has been a while since I left as thoughtful. My only regret is the my sister Becky was not here to join us. I imagine she would have been shaking her head mightily.