Rain and Fun in Ubud 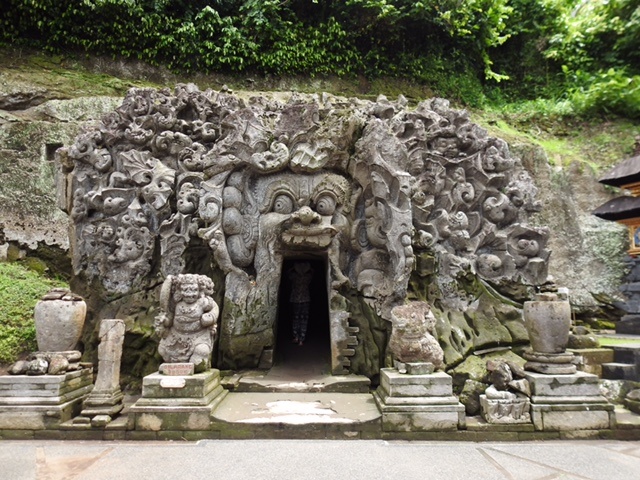 I should start by saying that we have really terrible internet tonight. We find this confusing given the fact that we are staying in the best place we have experienced on this entire trip. Also, it seems great at some functions (using FaceTime) and hopeless in others (uploading photos). The second point is relevant to your humble narrator, so we may just have the one photo and will add more later. [Note: I have now done so.]

On to the blog.

We have learned that the fine people of Bali are kind, helpful and honest about almost everything. When I say “almost everything”, I must note the one exception. They cannot be complete straightforward when it comes to the weather.

For the past week, every vendor and hotelier has commented that “the rains have come early this year.”

Every afternoon, we have experienced a torrential downpour that occasionally borders on Biblical proportions. When we ask about the weather, we learn that “the rains have come early this year.”

We did not question this meteorological assessment until our lunch with Patricia and Mathew yesterday. Patricia casually mentioned (as the rains came during our late lunch) that we are in the rainy system. She then noted that the fine folks of the Bali are wont to admit that any season is the “wet season” and will suggest that the rains have come early or stay late.

We realized that we have been fooled by an island-wide con. We are deep into the wet season. Actually, to be completely fair, we are NOT in the wet season, we are in the middle of the 2–month monsoon season. Yep, it is wet.

But we are still finding joy every day.

Today, we did three things worth noting.

I will start with the last item first. Virginia, Susie and I channeled a little Elizabeth Gilbert and went to yoga class. We soon learned that we were among people who took their yoga very seriously. We were amateurs among professionals. There was some extreme stretching and balancing going on as well as impressive chanting. Despite our inferior ability, we did enjoy ourselves. 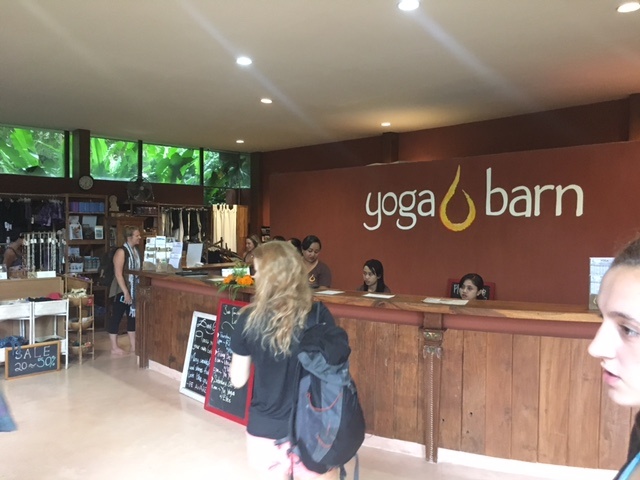 But we did not achieve total consciousness. So I guess we still have work to do.

OK, time to describe the other two treats.

We went to the Elephant Cave. Perhaps my favorite part of the Elephant Cave is the fact that it has nothing to do with Elephants. Nothing. Nada. It seems that one of the local names for this temple complex sounded something like the word “elephant” in someone else’s language. Yeah, a pretty weak connection, so let’s just forget it.

Here, we see the cave ready to eat Susie. 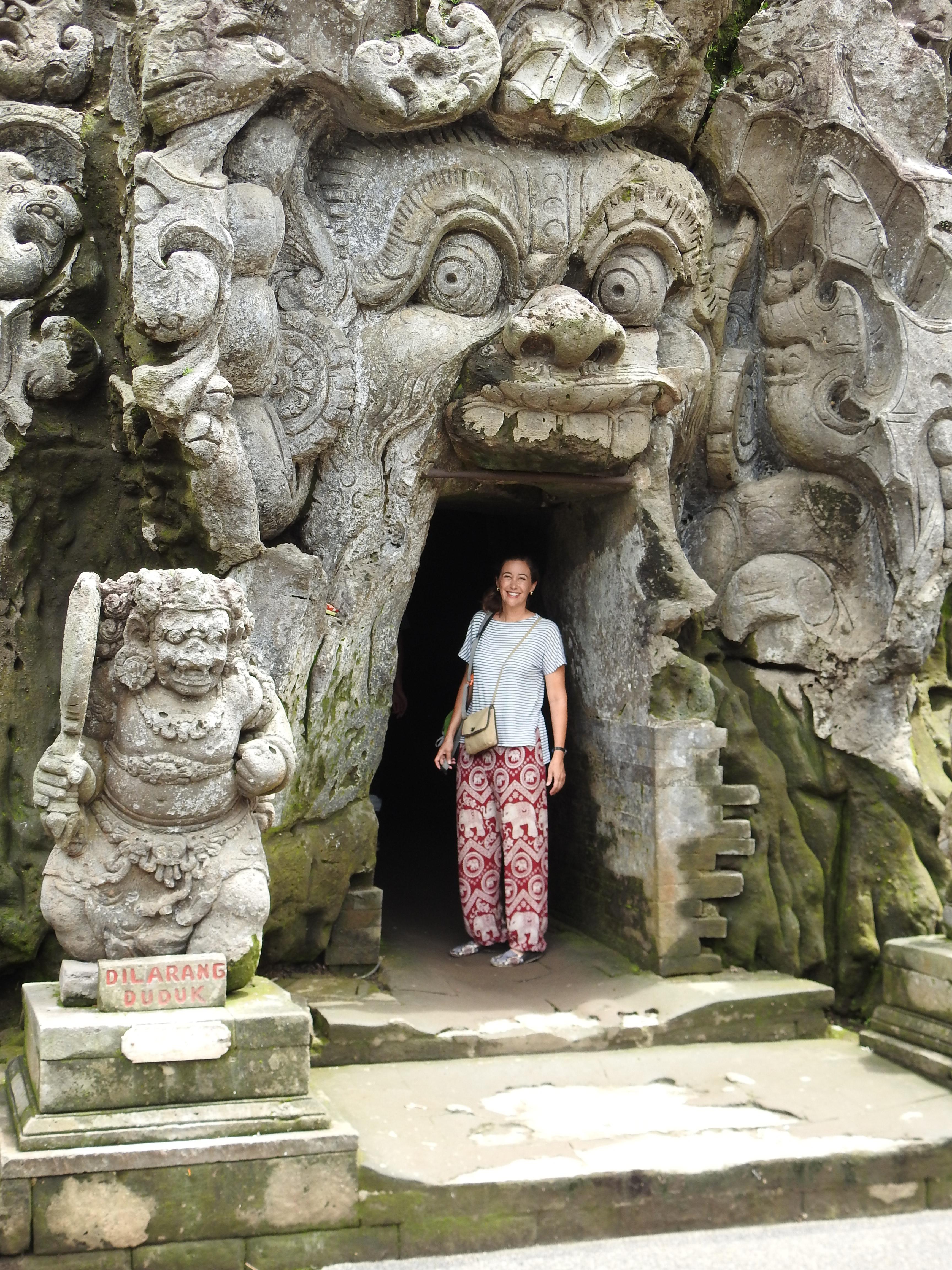 What made the Elephant Cave fun was three things: the site’s fascinating cave, a group of aspiring artists painting it and a pointless detour.

The Elephant Cave is actually an archeological site more than a cave or a temple, but the star of the site is the cave. Its entrance is a massive sculpture featuring a giant mouth that as its entrance.   It looks exotic – even a little weird. I loved seeing the family enter the cave as if they were eaten.

The cave also attracted a class of perhaps 25 artists that were all painting the cave entrance. Bali is a very practical place, so I assume that these aspiring painters were not there to perfect a hobby. I am guessing that they were hoping to learn enough about painting to sell their work to tourists. Actually, some of the pieces were really creative. Clearly, their instructors were not painting by numbers. They were obviously encouraging creativity. 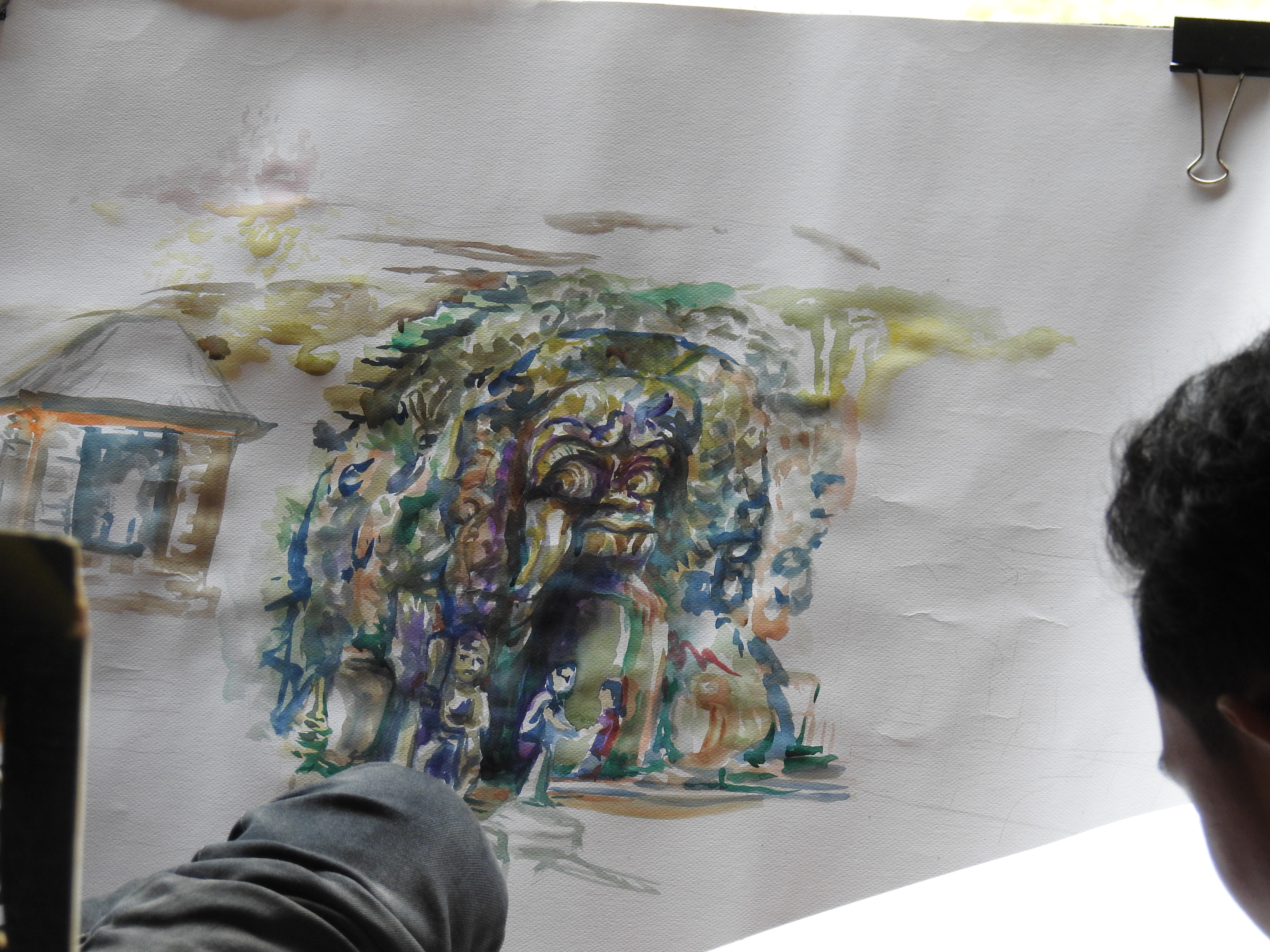 As we walked around the area, we saw a sign that said “Go To Temple” with what looked like an arrow. 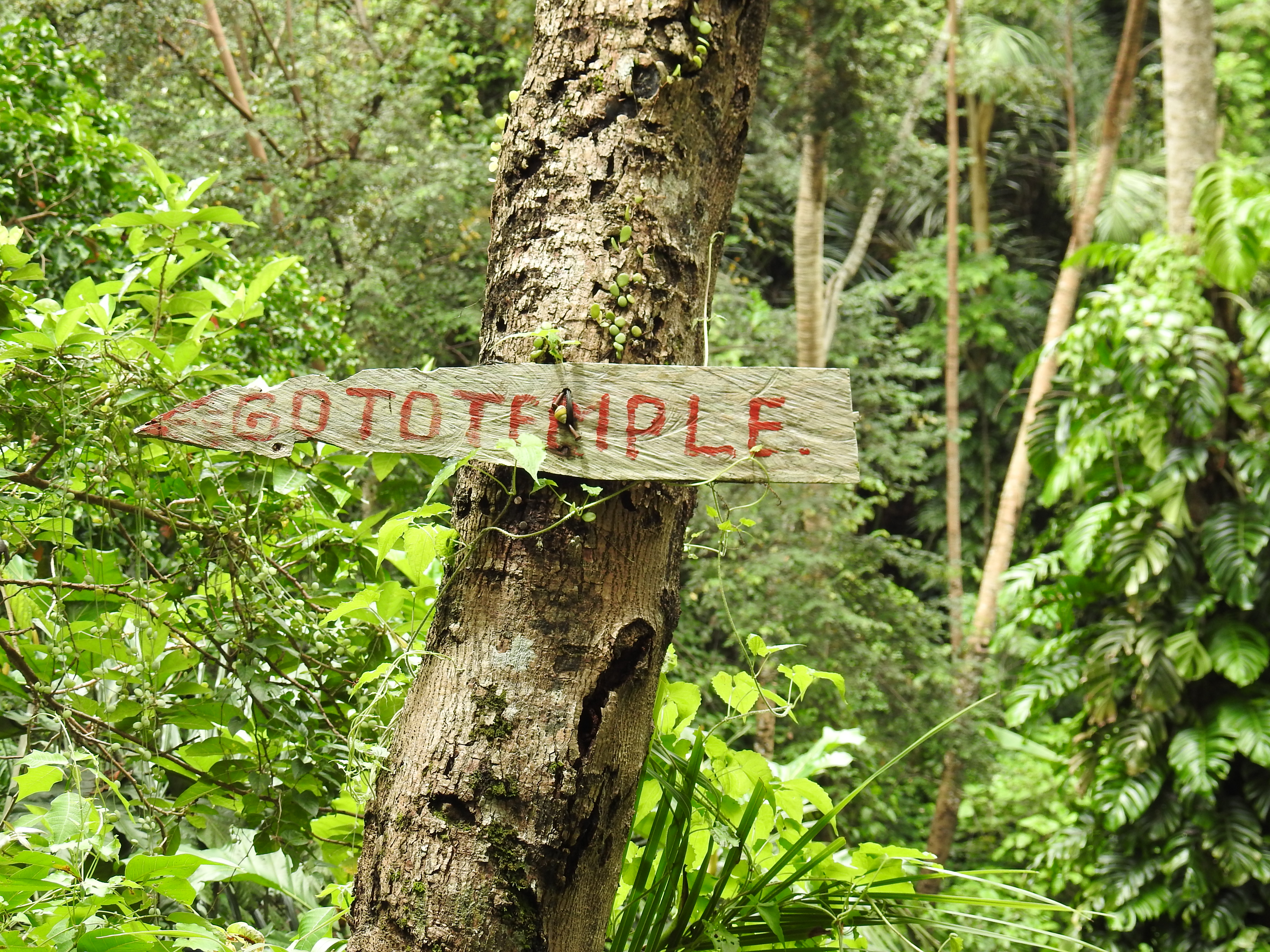 Next to this sign was a non-paved, muddy path into the forest. We also noticed that no one was walking on it.

So, of course, it was a must-do adventure.

We probably walked for 15 minutes, sliding regularly and aggravating several dogs. We found nothing. 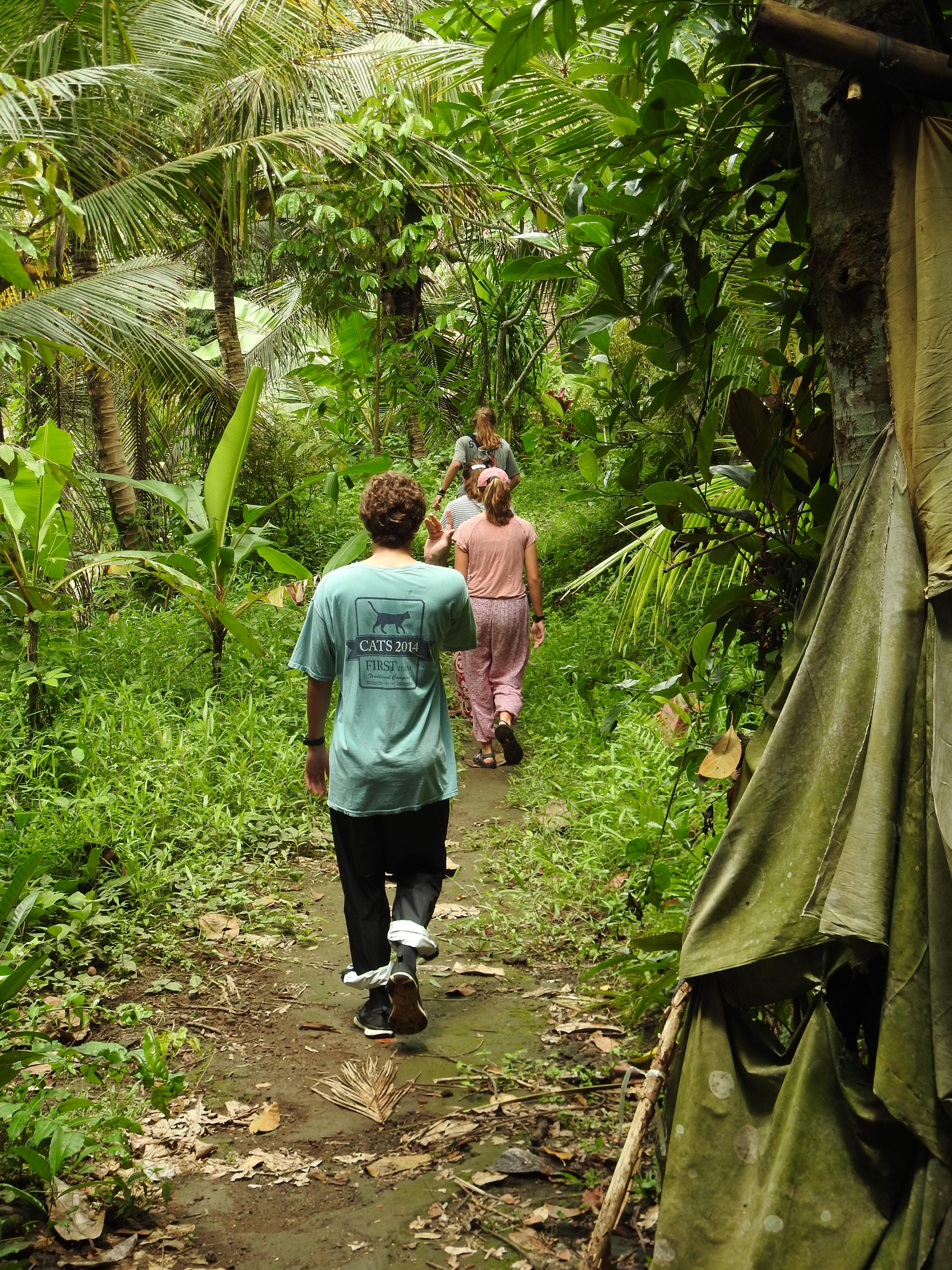 While I would like to think that we learned an important lesson about going off course, I suspect we will continue to do the follow the unmarked paths. Every now and then, it is worth it.

Finally, we went to one of the hallmarks of Ubud – the Monkey Temple. Unlike the Elephant Cave, the reason for the name of this place was clearly obvious – the place swarms with monkeys. These primates are quite active and constantly begging for food. About every 200 feet in the park we would see a sign extolling us to be safe. Among the key bits of advice were the following: 1) do not look the monkeys in the eyes (seen as an act of aggression), 2) do not feed them anything but approved foods (defined as “foods that we sell to you”) and 3) avoid the baby monkeys because momma is a-coming soon! 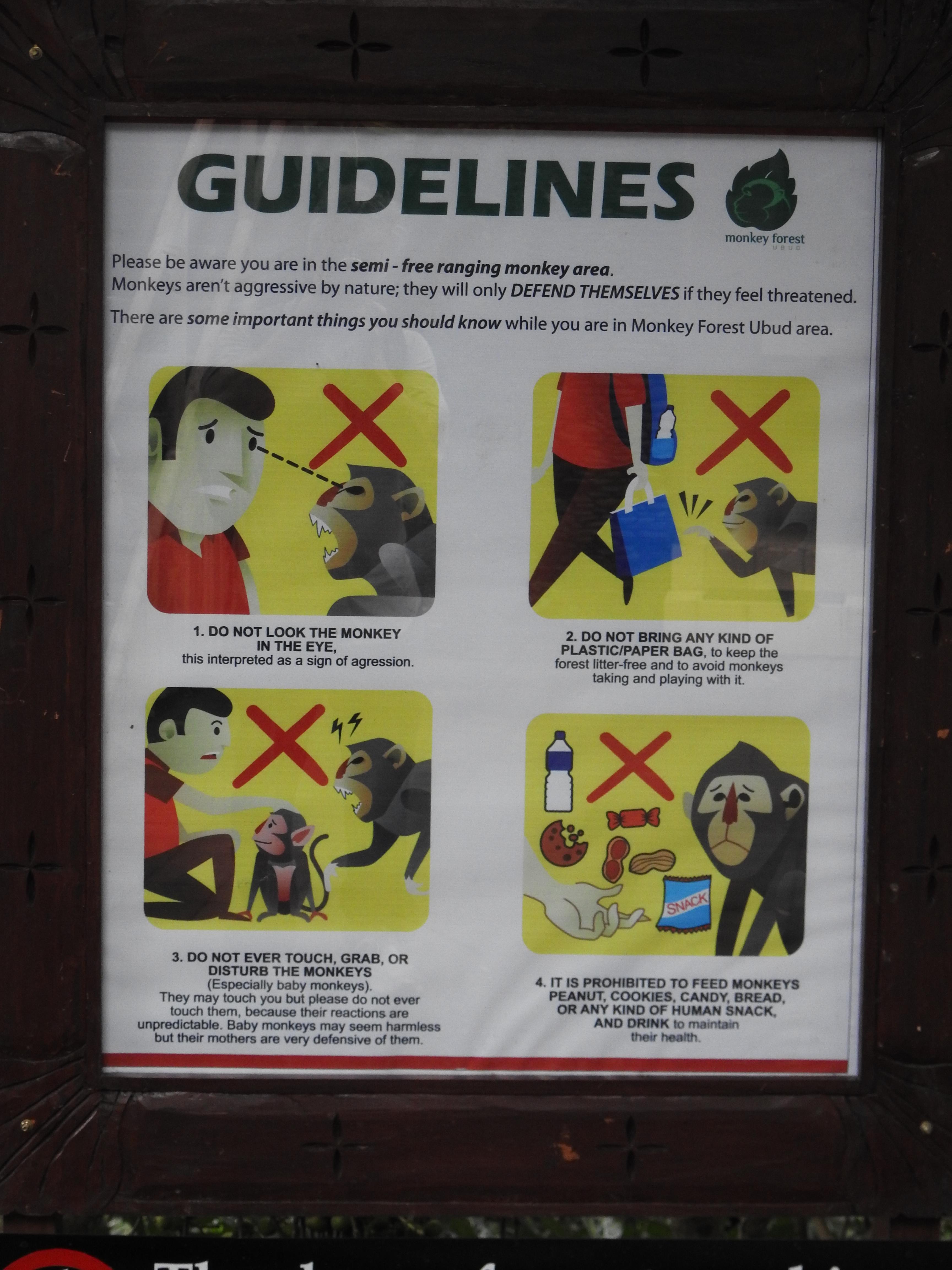 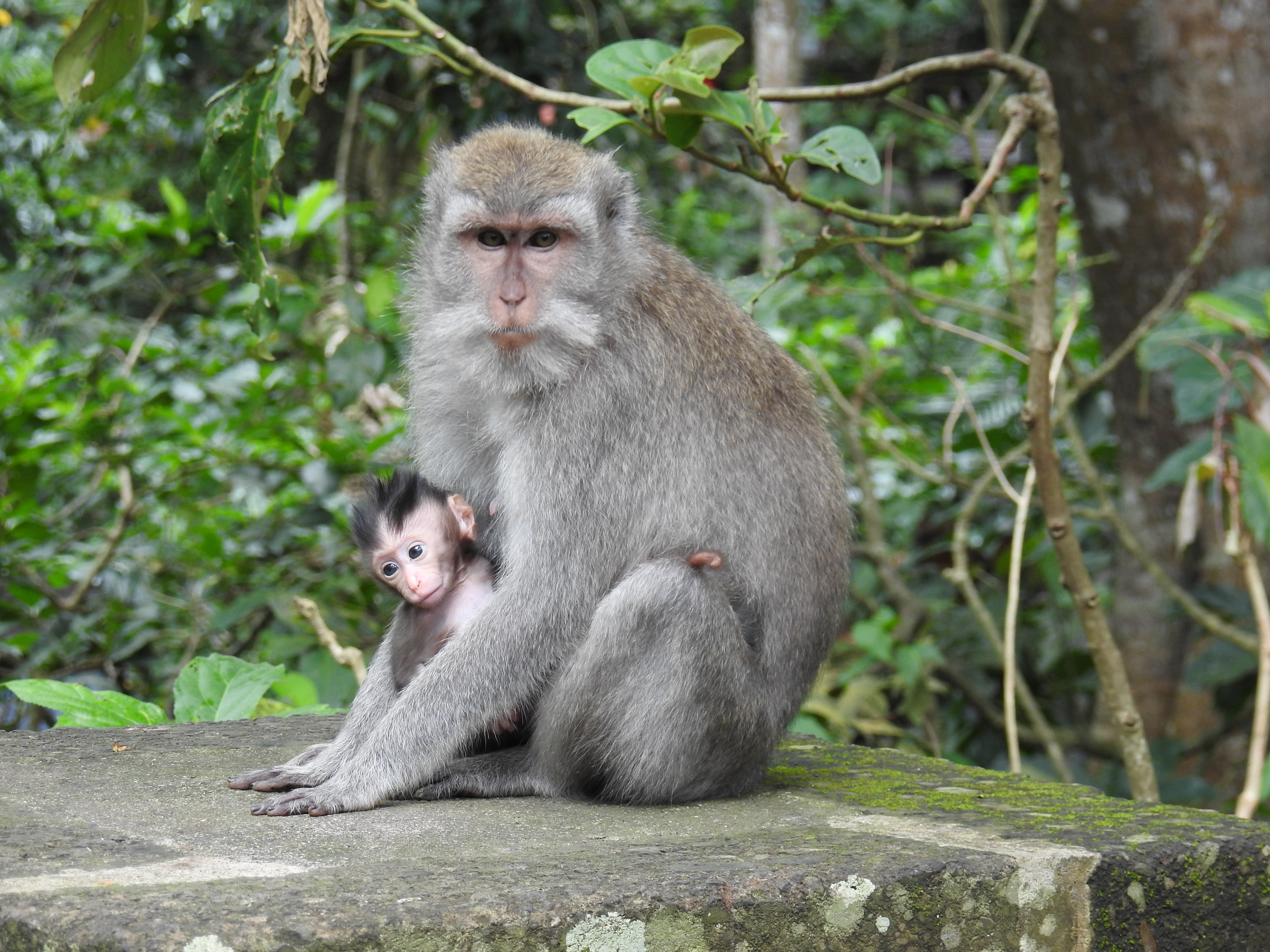 In addition to the playful and amusing monkeys, the people who created this temple were enthusiastic sculpture-builders. As their inspiration, they made sculptures of what they saw around them. Knowing this, I can tell you that what they saw was 1) lots of great animals and 2) human mating. I will spare you the latter, but they did not do us the same courtesy. 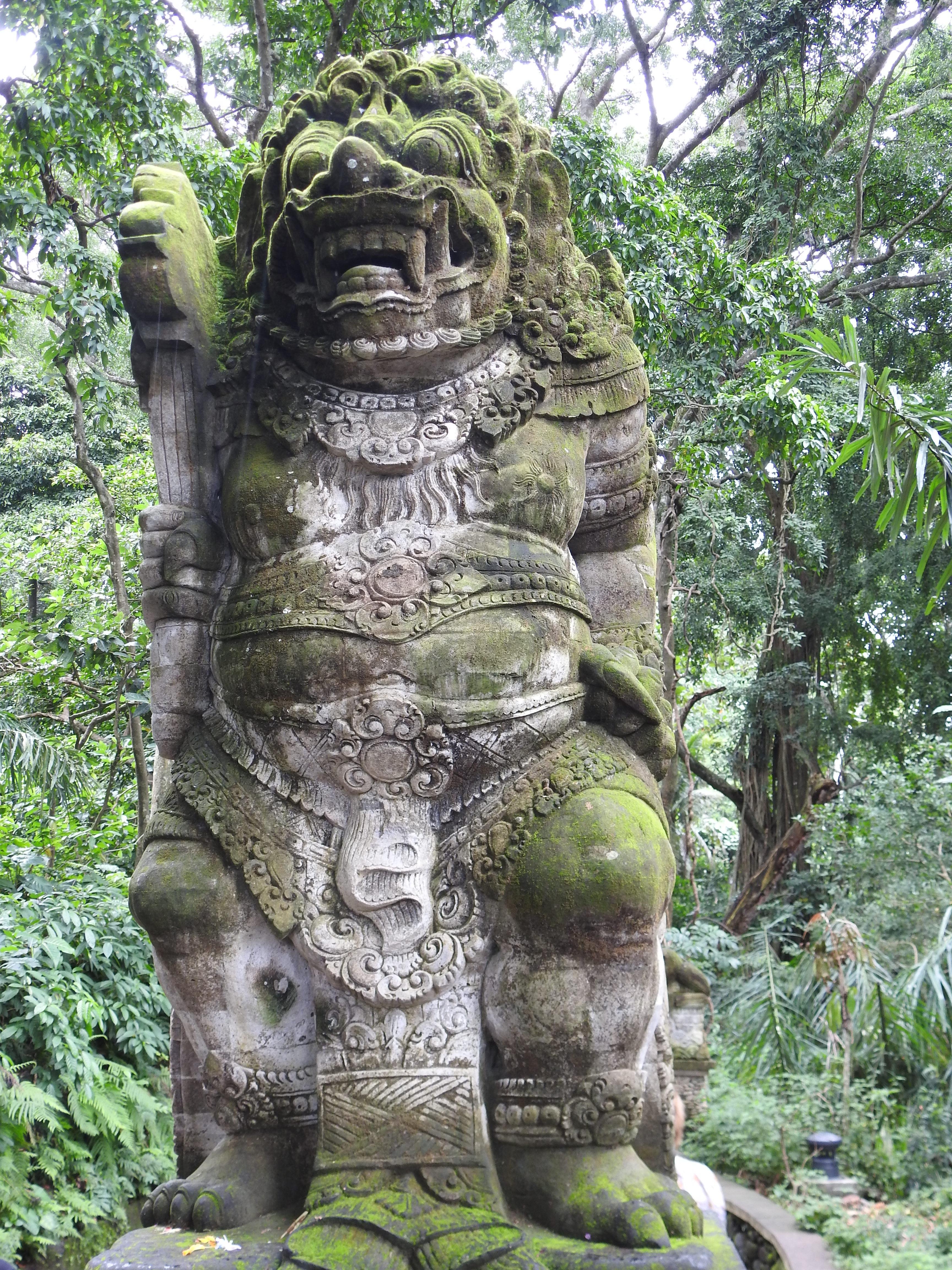 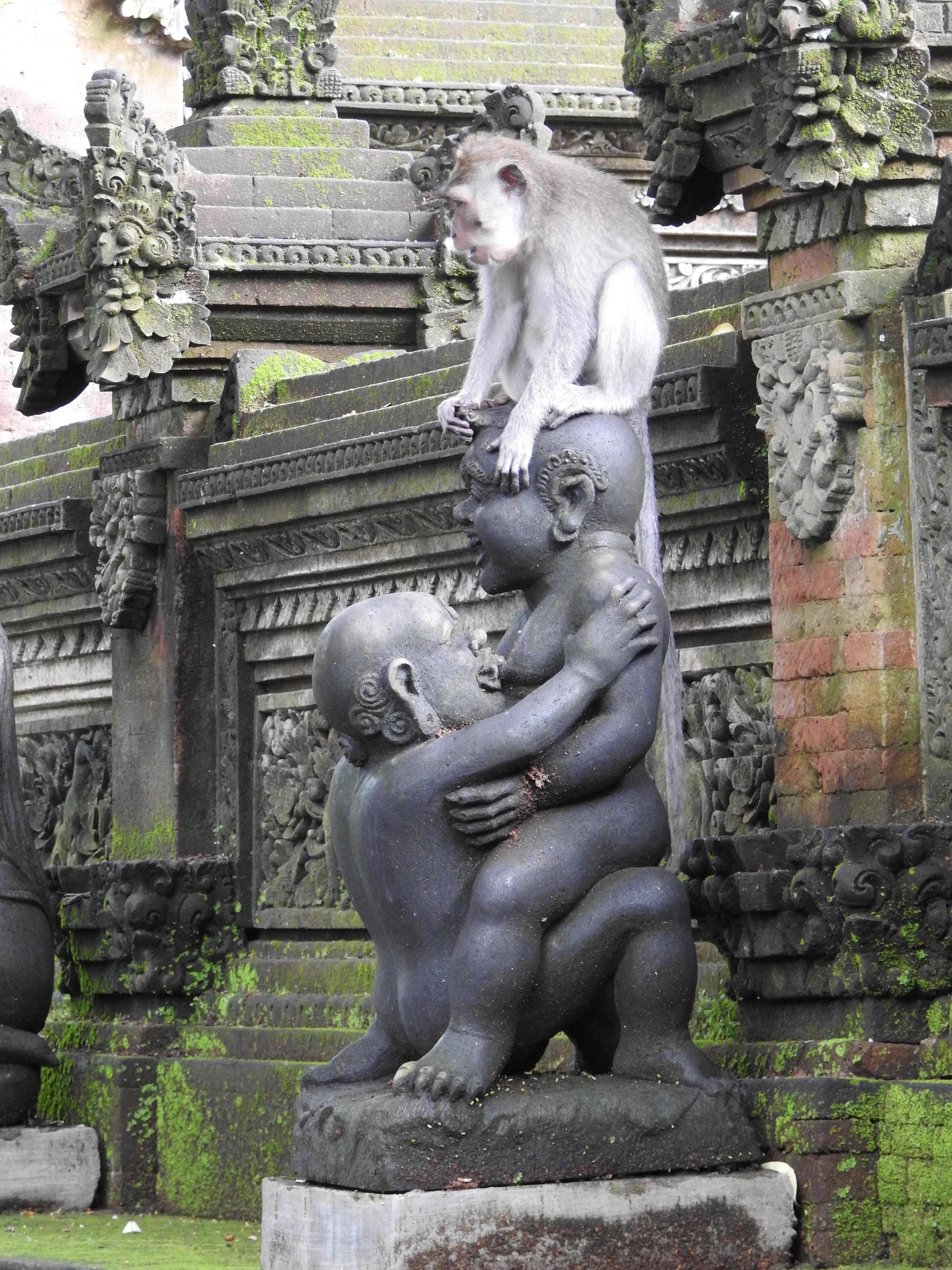 The monkeys would enthusiastically climb on you if you had food.  This experience could be jarring.

But not all monkeys were aggressive.  My favorite was this shy guy. 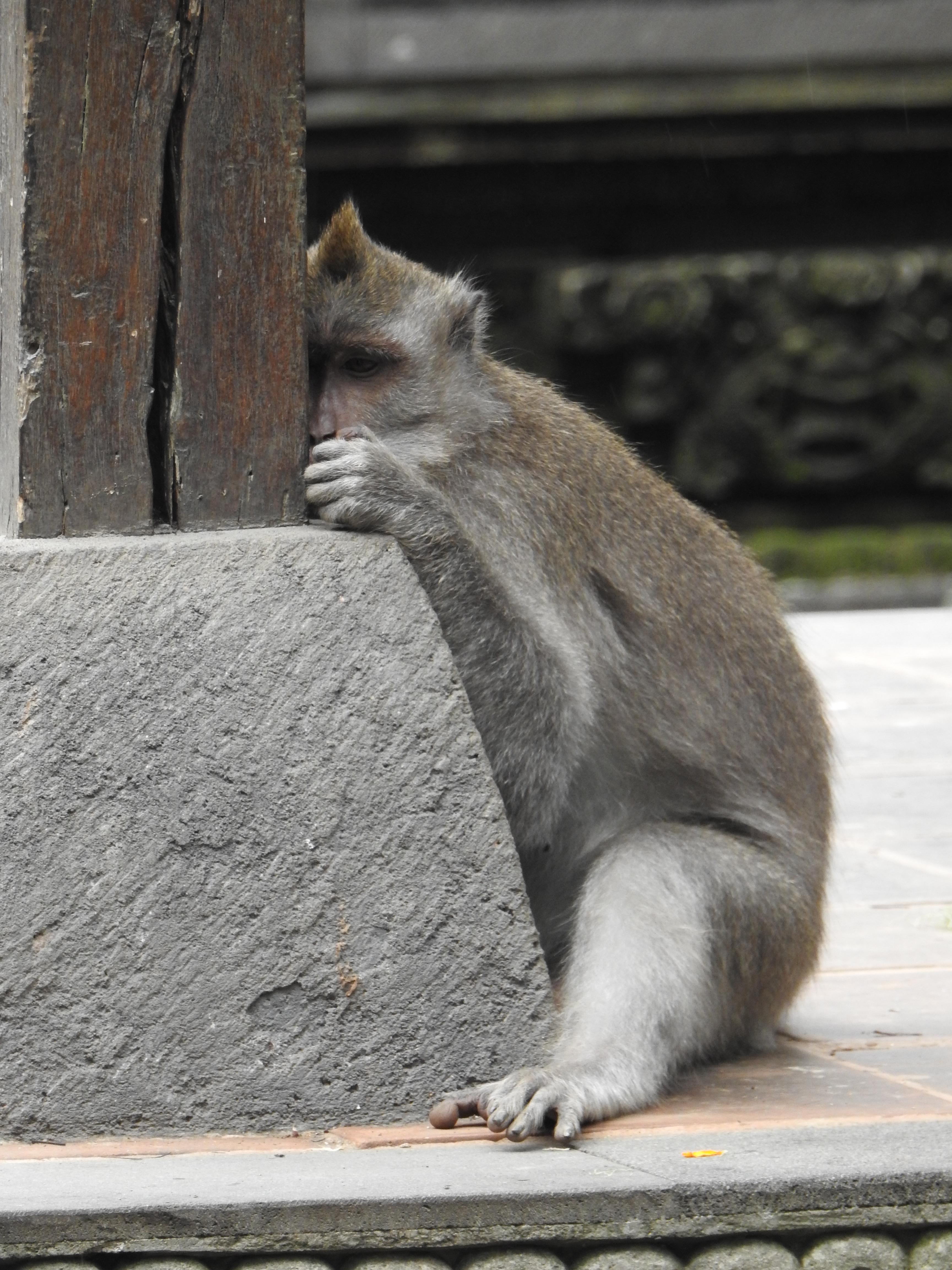 Before I conclude, I will endorse Ubud as a place to visit. Nothing is particularly spectacular – the temples are not massive and the activities are not very unique. But this place has a lovely feel to it. OK, it might have too many westerners for any claim to authenticity and there are a massive number of souvenir places. But the people are great, it remains relatively uncrowded [Note: so says the man visiting during the Monsoon Season, so take that with a grain of salt] and there are enough pleasant surprises (great food, fun music, attractive art) to assure that you are always smiling.

We have one additional day here before heading to Java to climb a volcano.

I agree, I wonder why we are not staying too!