Not as Young as I Thought 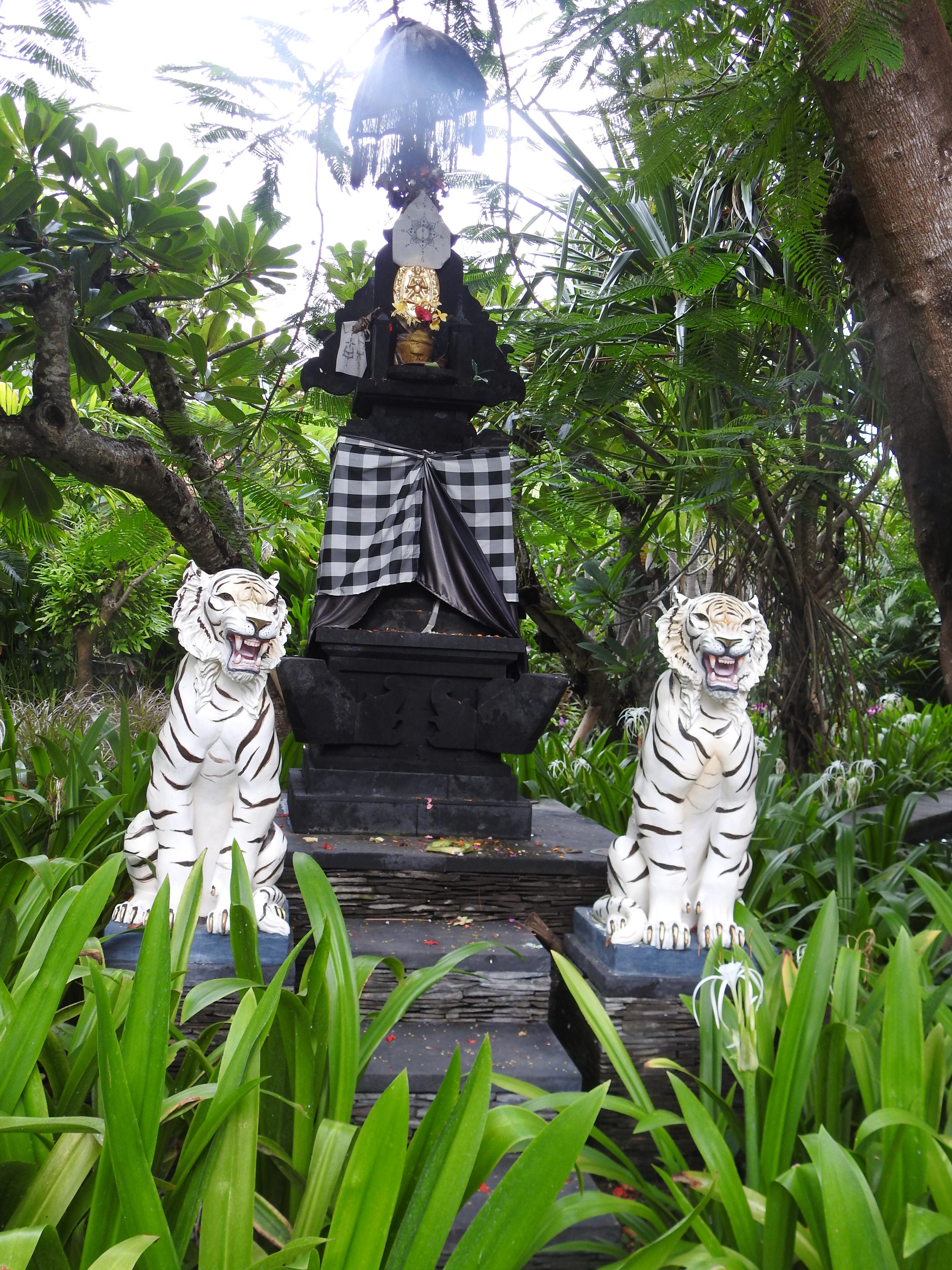 In the last week, I have had two events that helped separate me from my self-perception of youth. I tend to see myself as young. Not “Nickelodeon” young, but certainly “can blend in with people in their 20’s-30’s” young. Of course, camp does a great deal to support this perception (deception?). In our community, everyone is valued and we make real connections. During the summer, I will have conversations with teens and people in their 20’s that are sincere and powerful.

So I bring this view to this trip. I am happy with this view. I feel no need to separate from it.

And then the two events happen.

The first was the reunion with my HBS classmate. When we were met, I suddenly realized that the day we entered school was the same length from my birth and it is from today. That is quite a blow.

To defy this reality, I decided to prove my youth. I would not recommend this to anyone.   Here is what I chose to do.

This is not the stupidest idea if two things are true: 1) the yoga instructor embraces the spirit of yoga and 2) you can surf.

Neither was present for yours truly.

Our yoga instructor looked like he was sent from Central Casting to play the role of “wise Bali yogi”. He is 5’3”, bald and staggeringly flexible. He also has no discernable age. He is somewhere between 45 and 65. 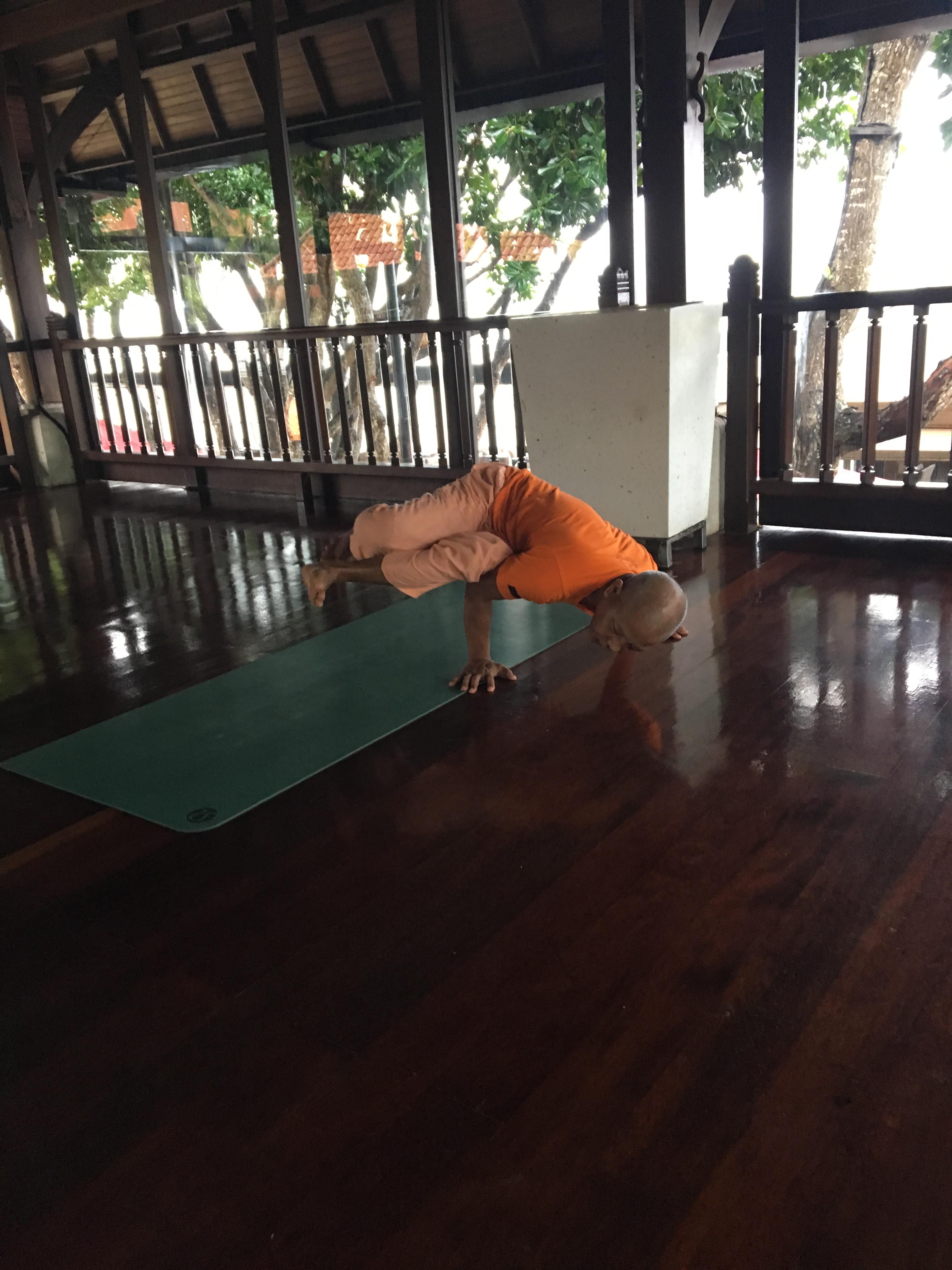 One of the rules of yoga is “you are not competing with anyone – just do the best pose YOU can do”. Another rule is “stay within yourself”.

He was not fond of either. He saw that I had practiced yoga before, so he was constantly extolling me to try new poses and push myself. He did not quite taunt me, but he did point and say, “you try this” and “next time you can do better”. I am embarrassingly competitive, so I hear these words as “you do not have to do this, unless you are a loser”. 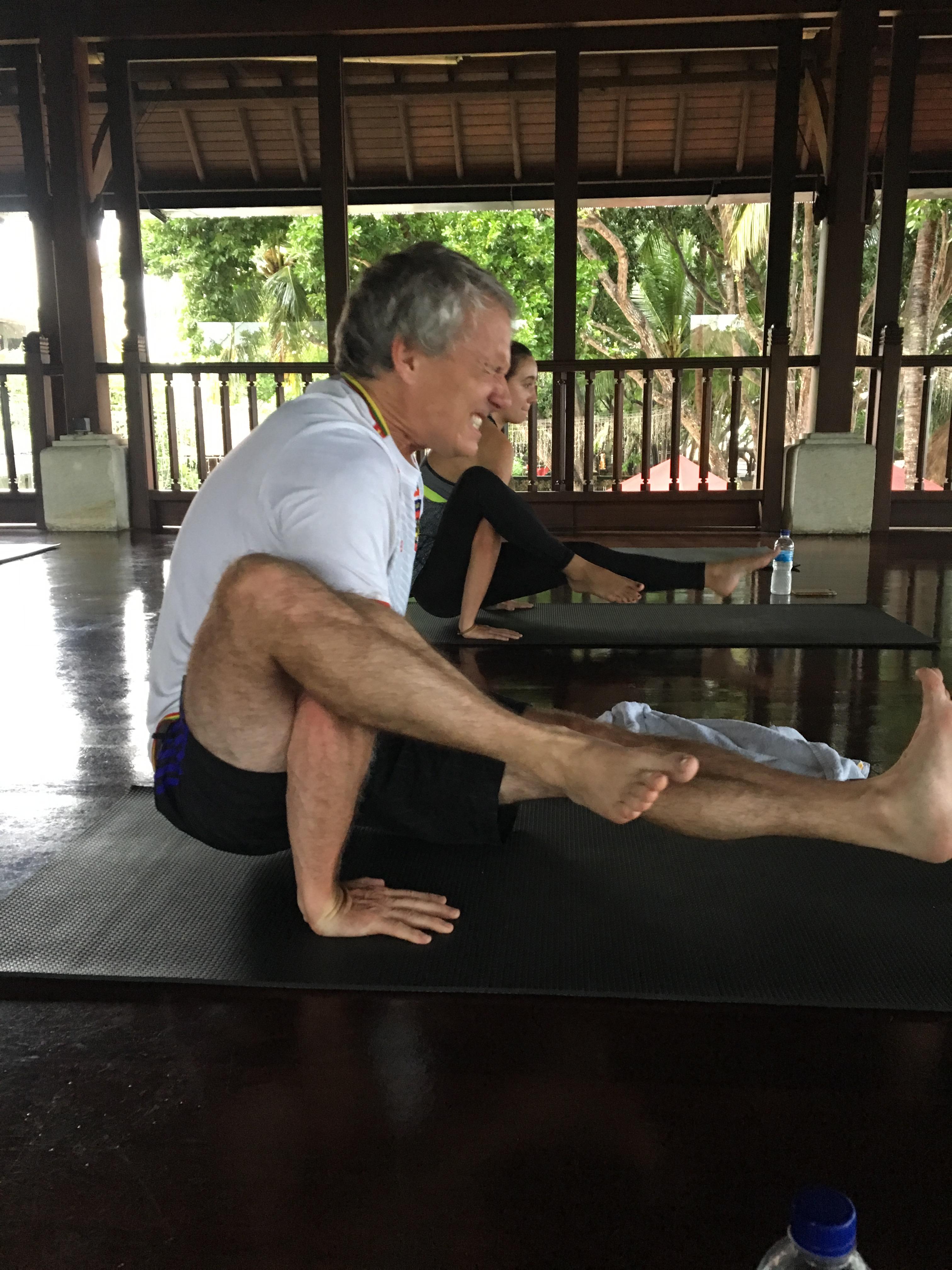 This man does not look young.

I left sore and exhausted.

But I then saw Liam at breakfast. “Want to go surfing with me daddy?” OK, I had already experienced a massive surfing disaster a week ago. But the waves had been really high (4-6 feet) that day. I kept thinking that my balance would enable me to succeed. Perhaps more importantly, it is a rare pleasure to have an almost 20 year-old actively request your presence.

So I joined him. I joined him knowing that the waves would be “kinda wimpy” and that I would find a way to surf. 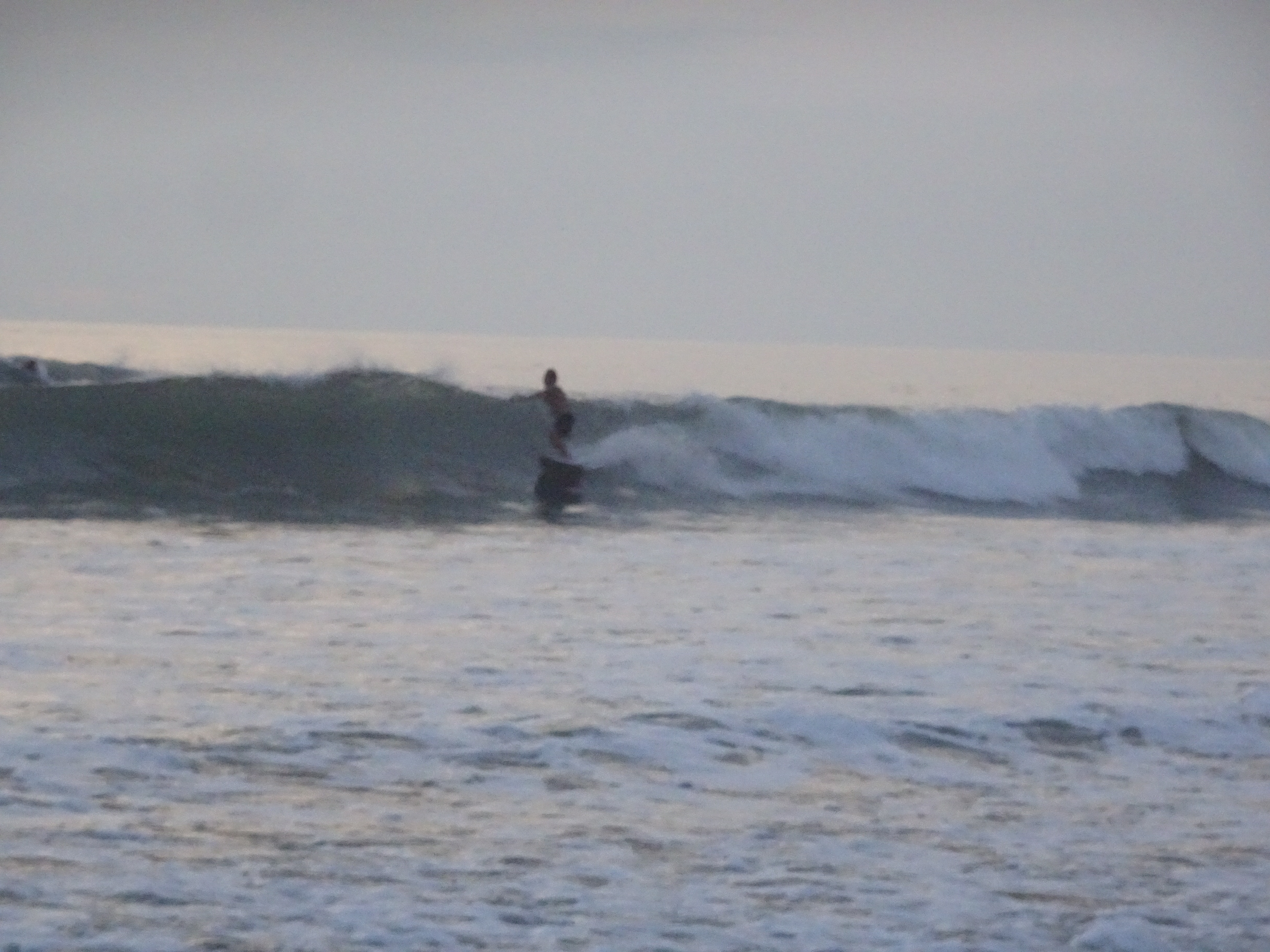 As we got there, Liam looked out and said, “Wow, the waves are a lot better today.” In this context, “better” is a highly – nay staggeringly – relative concept. If you are an accomplished surfer, higher IS better. If you are a deluded 52 year-old sadly attempting to deny Father Time, higher is, well, suboptimal.

It was not really the craggy rocky bottom (that cut up feet) that broke my spirit. Nor was it physical exhaustion or failing regularly. The hard part was getting stuck right below the breaking of the waves. Large waves that break can force you backwards. Now add an 8 foot surfboard. This large item is incredibly effective at enabling a person to defy gravity and float on water, but it is equally effective acting as what I call a “torturous water sail”. On three different occasions, I needed 10-15 minutes to simply get back to the point where I could then experience my next surfing failure.

I loved being with Liam, but I left exhausted.

I did not feel young the rest of that day.

Before I go, I want to share a classic Wiley story.

Wiley has an elaborate shower process. His long hair makes for longer showers even before you realize that he simply likes showering. Apparently, this desire for a lengthy shower was not impeded by a lack of hot water. He spent 30+ minutes in there. Admittedly, most of it was optimistically sticking his hand into the water stream and hoping it had become suddenly hot. Instead, nothing happened, so he took a cold shower.

The cold really got into his bones, so he decided to warm up by sitting on his balcony. Unfortunately, the balcony door would not stay shut and kept flying open. Wiley asked that Virginia lock the balcony and added that she should let him in if she were to leave.

Virginia read and hung out for 30 minutes when she got a call from Susie, “Lets go check out the town.”

Always up for an adventure, she said A-OK.

They walked the area for half an hour or so and eventually found their way to a store that had wifi. Virginia looked at her phone and saw the text from Wiley.

She also saw the text from Terrill, “I just got an text from Wiley. It does not make sense. He says he is stuck on a balcony.”

Virginia gasped. Susie wondered if she had been stung by a scorpion or if she had suddenly received prime tickets to “Hamilton” on Broadway.

“We need to go back to help Wiley.”

It turns out that Wiley was not really terribly inconvenienced. He had his computer and was happily reading. It took Terrill (who was just next door) a while to realize exactly what Wiley meant. Once she did, she walked next door, entered their room and opened the balcony. Yes, the door to their room was open, but he was locked out.

When I heard this, I pictured a thief entering their room and looking at Wiley as he (the thief) stole the place blind.

I am not sure what is the most Wiley-esque moment. The 30+ minutes in the shower, the hour on the balcony or the fact that he was not at all bothered by being forgotten.

The confluence of the trio is just perfect Wiles.