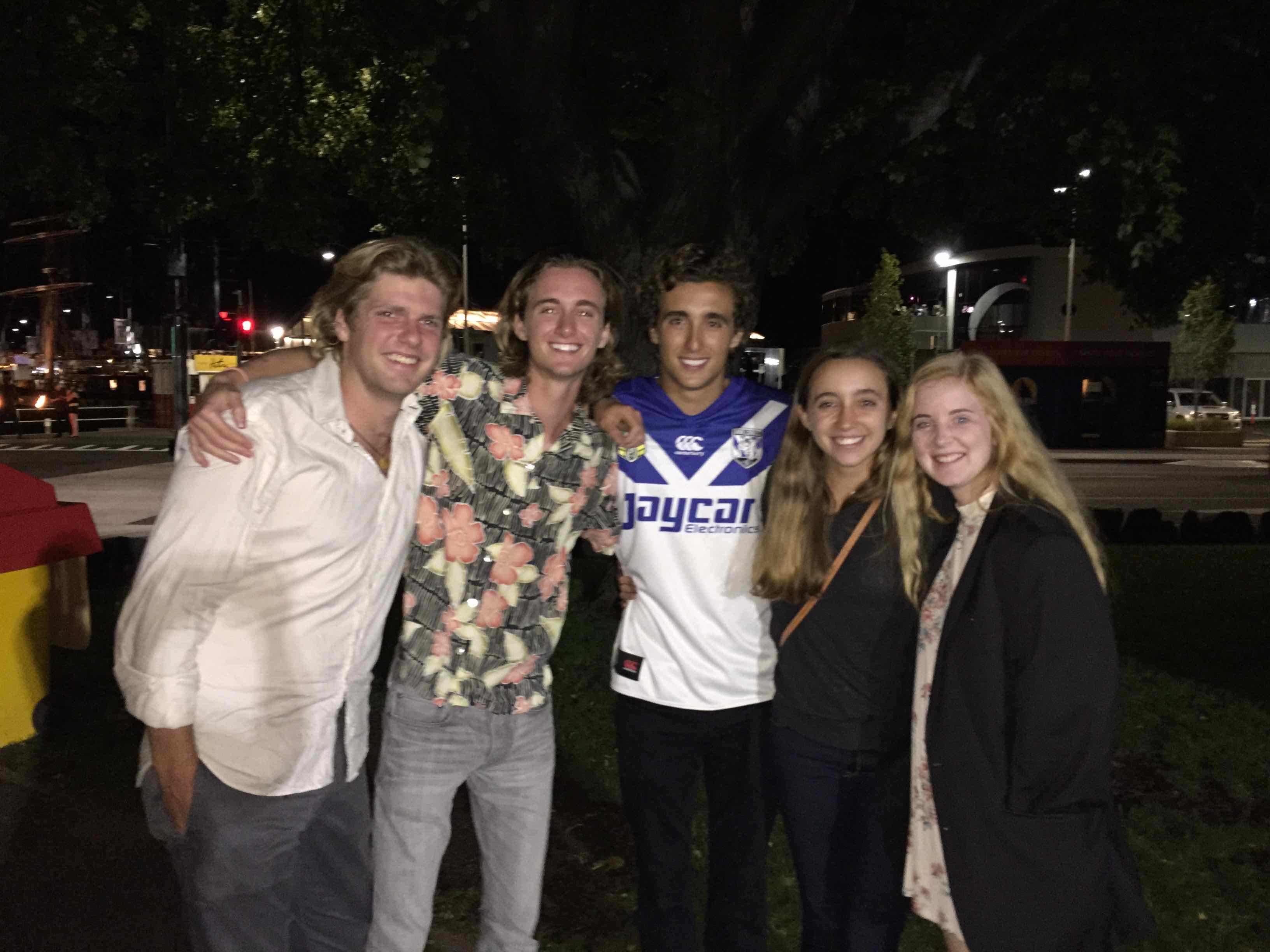 This is a photo should have been part of yesterday’s blog.  Our three oldest are flanked by Japser (the Tasmanian sail counselor) and Devin (our beloved long time camper/counselor).

On to the blog.

We are officially old people. You know the stereotype: the elder person struggles with an iPhone or remote control only to have a 5th grader instantly push all the right buttons.

But this is not us. I am pretty good with technology. I can operate remote controls – even when they are not my own. I have several mobile devices and I use a wide variety of apps.

Nope, I am not the technophobic Luddite.

But today, we arrived at the Great Southern Hotel in Melbourne and were struggling with the AC. I turned it to cool rather than warm, set the fan to high, but nothing happened. I looked at the timer, the “test” function and the temperature setting. Frustrated, I sat down and heard Susie ask Liam if he knew what to do.

He walked over to the control, studied it for 45 seconds and asked the question I start this article with, “Did you switch the “on” button?” He then touched one item and the cool air started to flow.

Ugh. I guess the grey hair was a big hint.

Some travel days are more trying than others. Today was such a day, primarily as the result of sleep-deprivation. We would need to wake at 6AM to catch our flight from Hobart to Melbourne, but we struggled to get to bed early.  Susie, Virginia and I lost track of time because we went to a concert and we were deceived by the late sunset. When the sky is not truly dark until 10PM, midnight sneaks up on you. Also, Wiley, Liam and Terrill were spending time with Jasper and Devin and would be out late.

Terrill and Virginia have been sharing a room with Susie and me. This arrangement is less-than-ideal, but the big Sydney Hobart race gave us a choice between sharing with the girls of having all 6 of us in a dorm room with two strangers. We opted for the former option.

But when Terrill came in at 1AM, it woke me. When the wind blew her cup off the window sill at 2, it woke me. For reasons I cannot explain, I was up from 3:15-5:00. Susie and the girls were also tossing a great deal in their sleep. I suspect we all went to bed worried about sleeping through our alarm. Not a worry. We just did not sleep.

Picture your emotions as being like a speeding car. Your self-control is your braking system. When you encounter any emotional stressors, you engage the brakes to slow yourself down and avoid a crash. In this analogy, a good night sleep is like having new brake pads. A rested mind can slow and stop easily. But an exhausted mind lacks any margin of error – the brakes have no pads and the metal grates on metal.

Today, we were consistently devoid of our brake pads.

We were mad about when to leave, how to pack the car, and who should navigate. The fact that we were dealing with Tiger Air only made things worse. This budget airline had great tickets ($61 one-way), but charged extra for luggage ($22) and printing our boarding passes ($5 we saved by printing them out at the hotel).

We were raw and frustrated when we arrived at that great crucible of patience: the security checkpoint.

Before I go further, please allow me to comment on the incredibly arbitrary nature of airport security. With 9/11 almost 15 years ago, you would have thought that countries would reach a consensus on how to efficiently conduct a security clearance.   Manufacturing companies develop best-practices and they are similar in Japan, Mexico, Brazil, Germany and the US.

But in the case of security procedures, there is simply no standardization.

For example, one airport in Australia was not bothered that Wiley had a full water bottle.

Some airports require that you take out laptops, others do not bother. The ones that care about computers disagree what constitutes a computer. Some consider iPads to be computers, but few include mobile phones. In the US, your shoes come off (unless you are TSA Pre-Checked), but almost nowhere else. Jackets stay on most places, but come of in the USA

Heck, I have been waived through an airport because I looked tired and showed a weary smile.

The entry to the security area at Hobart was promising enough, professing both a sense of humor and friendliness. 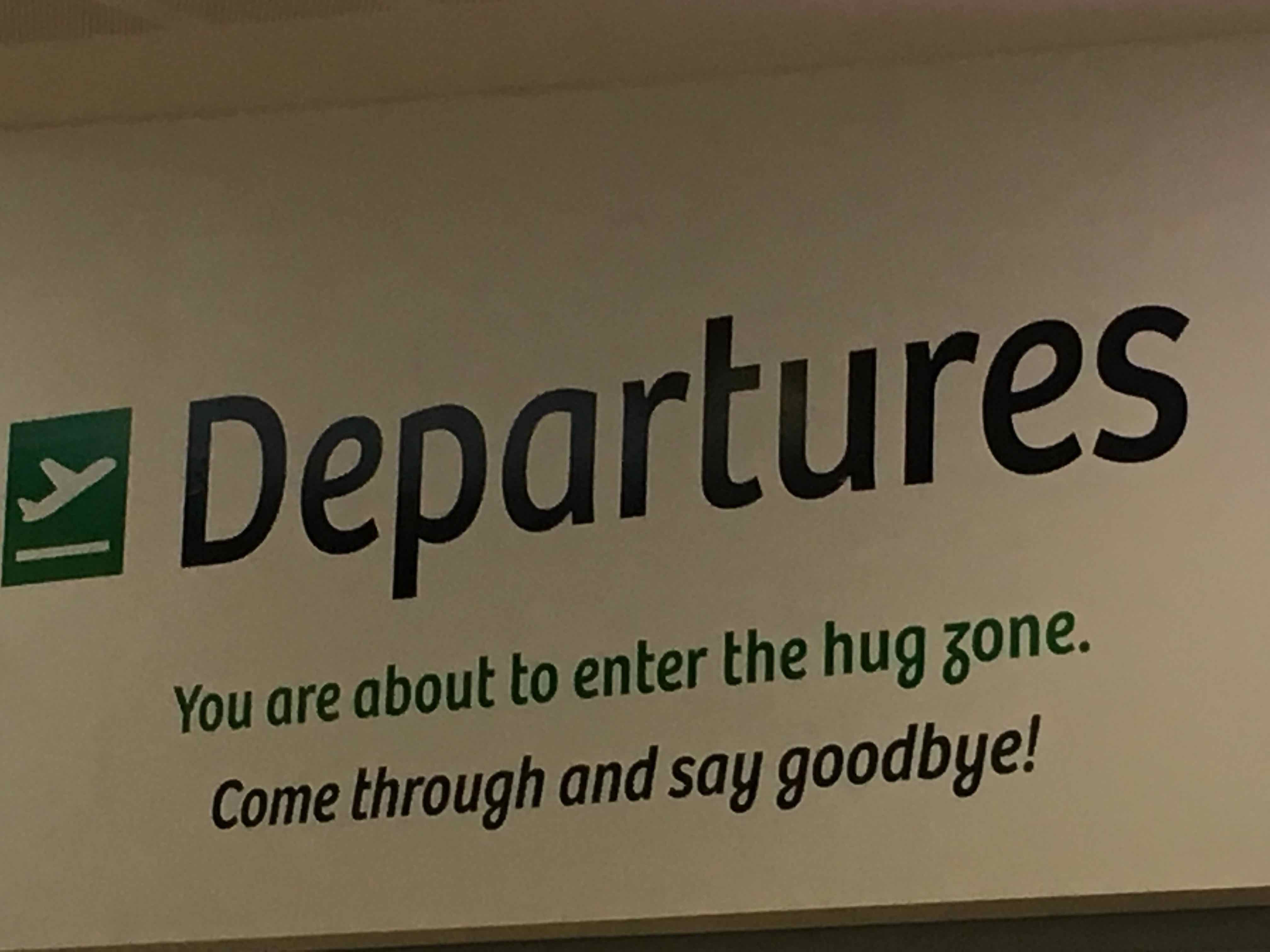 But this would be deceptive.

They would take my pocket monkey. 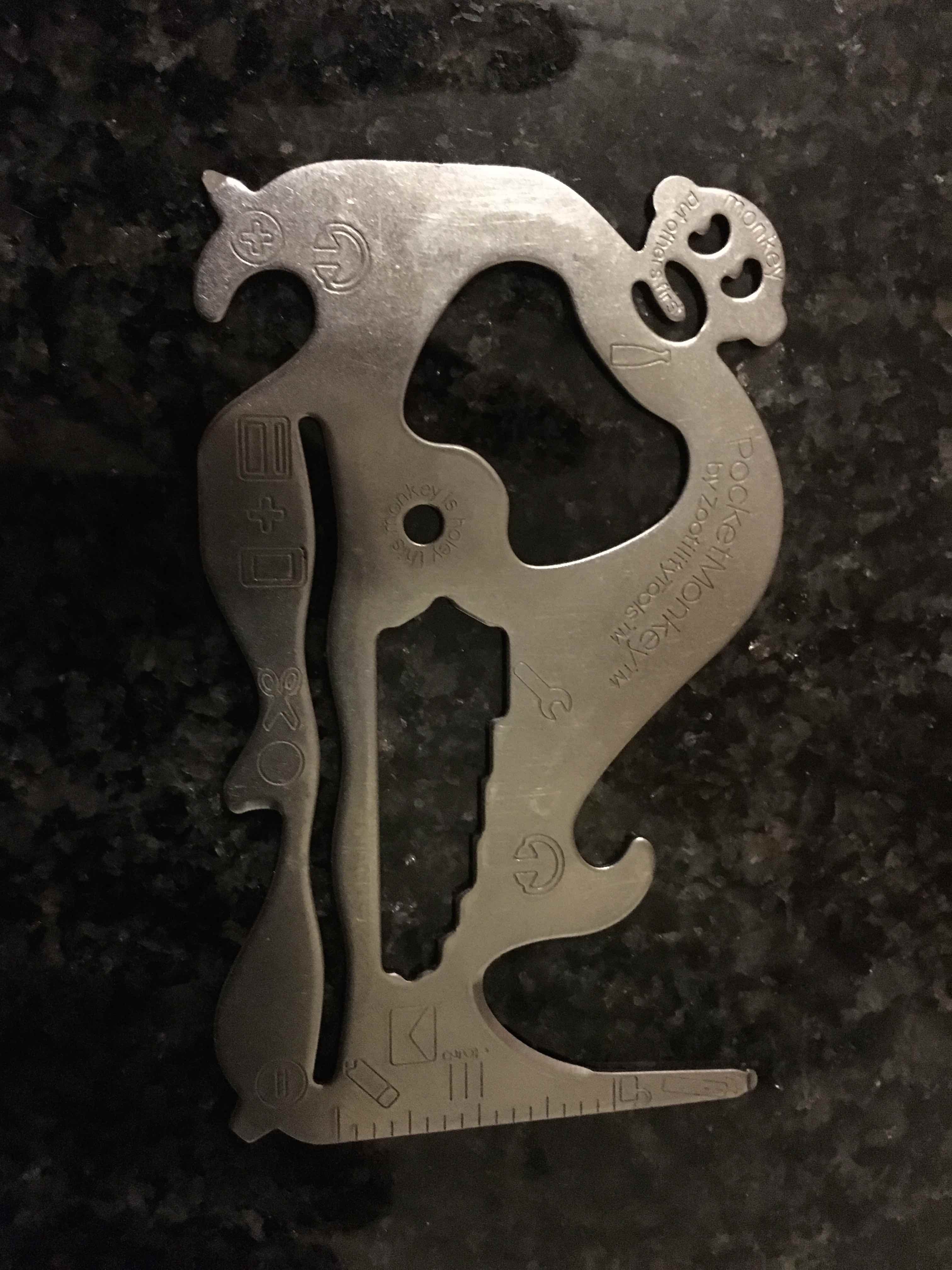 The pocket monkey is a very useful piece of metal that can be a screwdriver (normal and Phillips), a straightedge, a hex wrench, fruit skinner and bottle opener. It is the size of a credit card and wonderfully useful. It is also TSA approved.

I have traveled with it in the US over 50 times. I have taken it to 10 countries. OK, we did have troubles in Rwanda and needed to talk an airline employee into putting it into my checked luggage when it failed the check in the airport.

But I had flown with it twice in Australia – bringing it to the attention of the guards each time. Today (when I was emotionally strained and vulnerable), the guard looked at it and said, “No, this is a multi-tool. Sorry.”

“Sorry?!?!” This pocket monkey was like the 7th member of the family, and it was being taken from us?

My lack of brake pads was becoming fully evident. I explained that it had been approved multiple times by their own country. I resisted saying that Tasmania is perhaps the least likely place on earth for terrorist activity. I also did not suggest that a grey-haired 51 year-old on the verge of tears represented no threat to anyone.

I instead just folded like a cheap tent and slumped off to mourn the loss of my friend.

Our hope is that New Years Eve will prove to be a better end to this day.