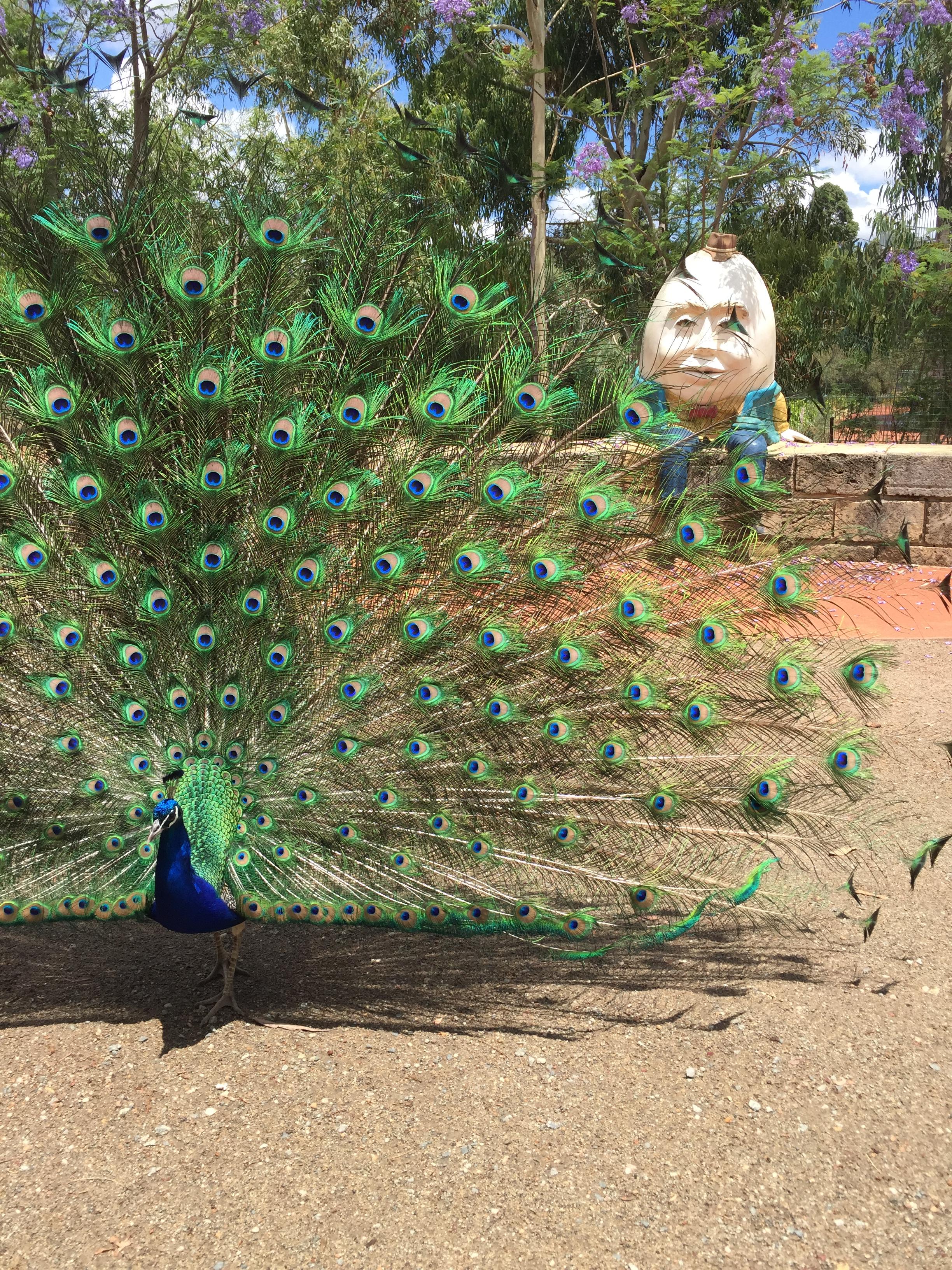 When you travel great distances, you generally expect to see grand sites –things you cannot see at home. Often these sites are world famous, like the Louvre, the Coliseum, the shrines of Bagan, or the Sydney Opera House. Other times they are great natural phenomena, like Mt Fuji or an active volcano.

But occasionally you come upon a surprise that fits none of these categories that simply delights everyone involved. Our trip to the Cohunu Koala Park was just such an experience. When we arrived there, I suddenly remembered the park that Steve Irwin’s (the Crocodile Hunter) family owned, the Australia Zoo. A quick look at their website shows that it is now an impressive facility, but this was not always the case. Before Steve Irwin became famous, it was closer to a roadside attraction than a major conservation site. Some of the early Crocodile Hunter episodes showed a place that looked rather amateurish.

The signs were hand painted and the enclosures seemed designed for cost savings more than animal separation. Heck, the main reason to go to the “zoo” was to watch the “Croc feedings” that typically involved Steve Irwin or an equally insane relative going into the enclosure with a croc and narrowly avoiding becoming the meal himself.

Clearly, they loved their animals and committed their lives to conservation, but the zoo was a privately owned company rather than a large publicly-funded institution. It had a modest budget.

This is exactly what the Cohunu Koala Park is.

The closest US equivalent I can think of is the “Exotic Resort Zoo” between Marble Falls and Johnson City on 281. The Exotic Resort Zoo features a bunch of herd animals (elands, antelope, zebras, buffalo) and a few odd other creatures like emus and camels.   Outside, statues of a tiger and a giraffe beckon you to enter, but do not let those decorative items fool you – no such animal resides within. Your experience is a ride on a flatbed with a cage around it made of cattle panels and feed the animals with pellets you buy from the company. It is fun for small children, but not much else.

Our favorite memory was going into the petting zoo area with an enchanted Terrill. She happily greeted and petted every animal she could until a friendly goat walked up. We assume that it smelled the aroma of food pellets on her and decided to check her out. He put his front hooves on her short, 3-year old shoulders and knocked her to the ground. Her face twisted into an expression of surprise and betrayal. After quickly realizing that she was not hurt, we all found the fall wonderfully amusing.

But we have not been back since.

So we had a choice today – go to the legitimate Perth City Zoo or go off-the-grid to the Cohunu Koala park, a place that looked dicey, but included an option to “hold a koala”.

The words “hold a koala” were like the Song of the Sirens to our crew and had a magical affect on everyone. I, however, insisted that we show them the whole website. The site made the Exotic Resort Zoo seem classy.

As we showed the kids, I expected to hear some hesitation or at least mocking humor. Nope. They fell in love immediately. Going to the Koala park became a mandatory endeavor.

We drove 40 minutes with each kilometers becoming more like the outskirts of Midland, TX – dry and flat.

Our arrival brought into a fenced parking area that felt more like a prison than a tourist attraction.  The signage was amusing as well. 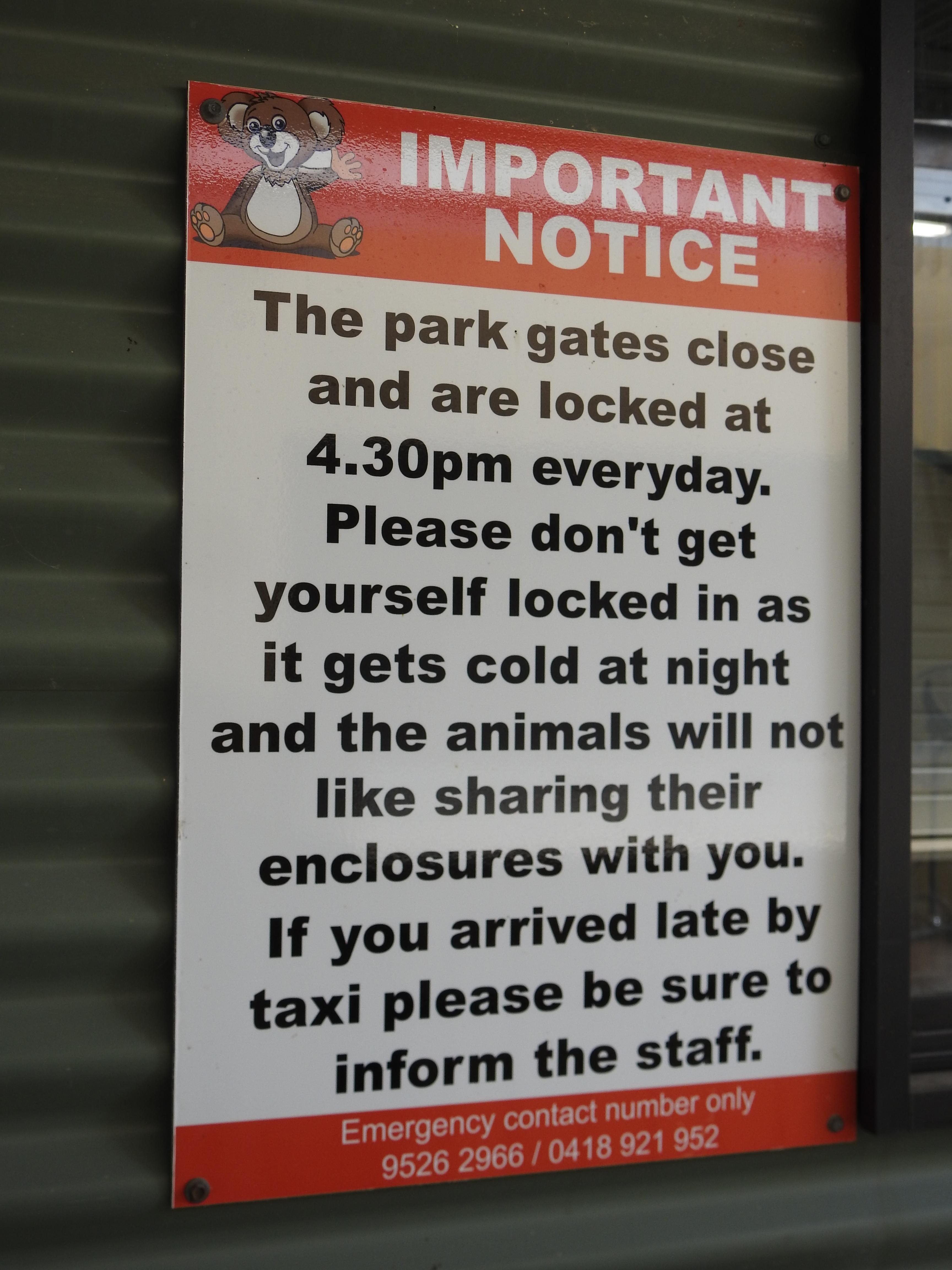 But the charm of the Cohunu Koala Park would be the wonderful people that worked there. The three women that we met truly love animals. The creatures in their care are their family and they adore them. They are knowledgeable and loved sharing with others. Once we started to ask questions, we became fast friends. They arranged bonus animal handling (an extra koala carry and some time with a blunt tail lizard) 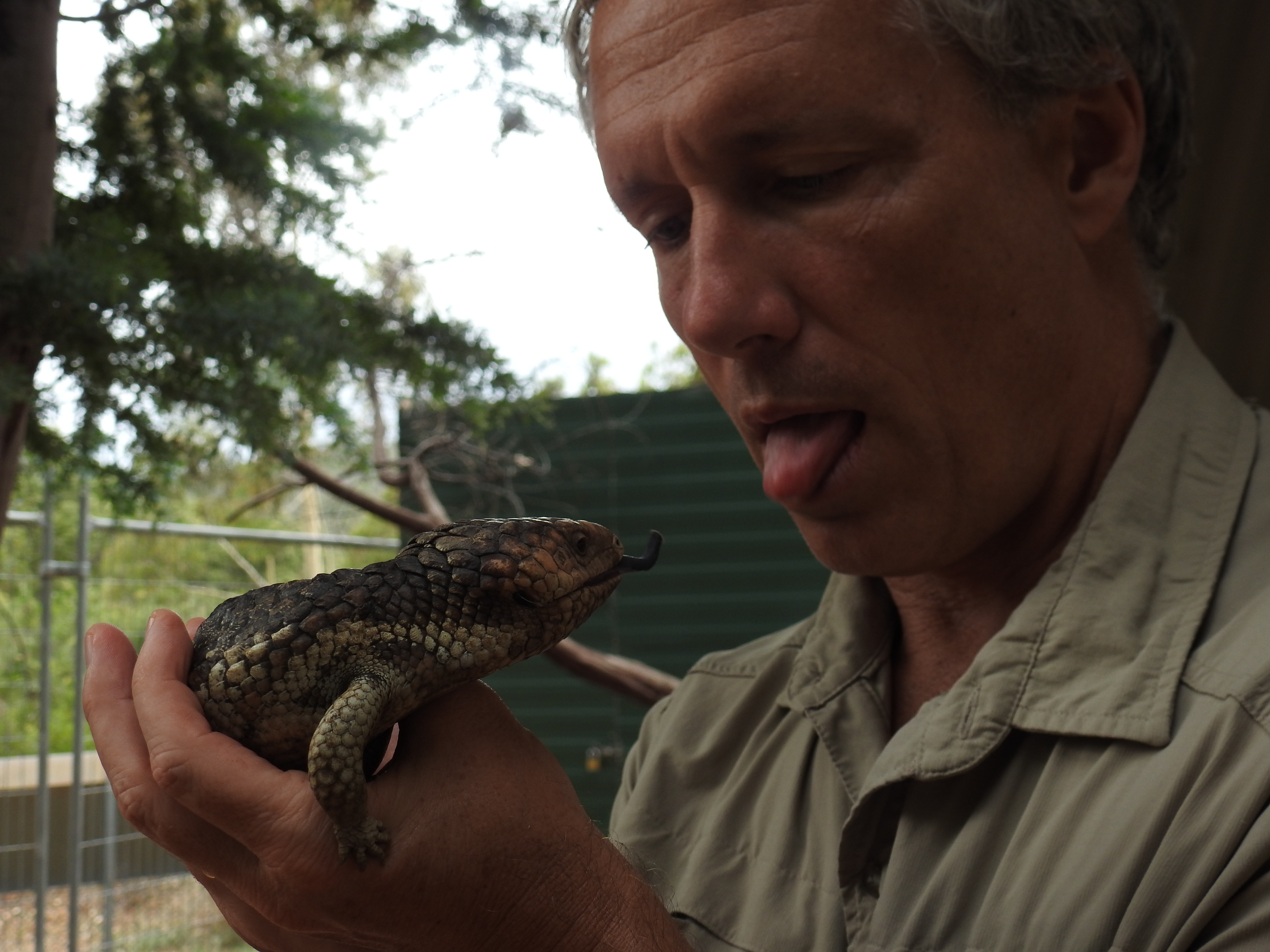 and gave us free food to feed the animals. [Note: the food of choice? Popcorn. None of those animal pellets for the Cohunu – it was Orville Redenbacher all the way!]

[Note: the animals clearly recognize the white popcorn bags.  The kangaroos came up to us, the birds cried “Hello” extra loud and the geese followed us.  Wiley briefly underestimated the tenacity of this mean, hissing birds, resulting in a game of tug-o-war with popcorn.  I love Virginia’s expression.] 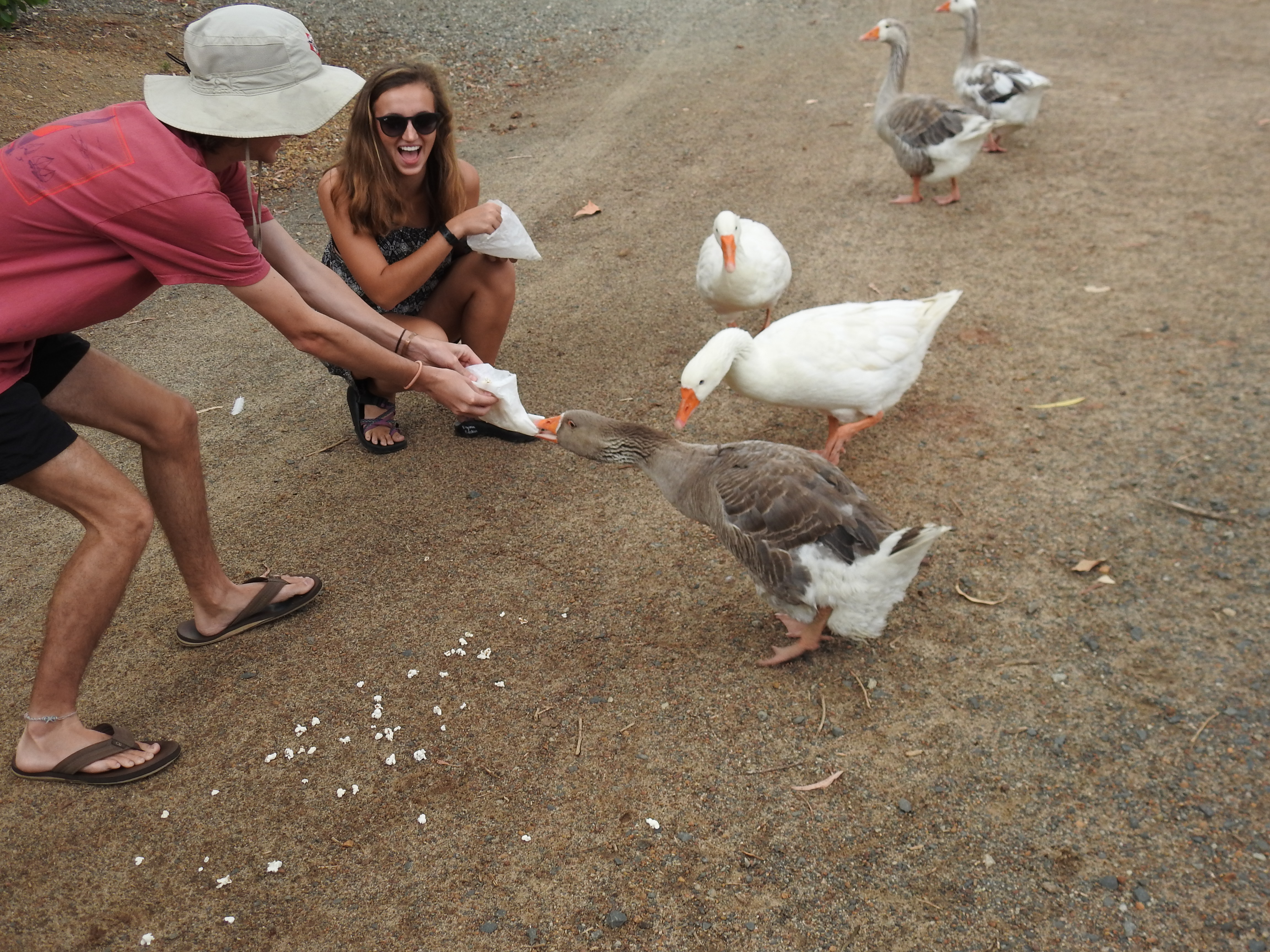 Holding the koalas was simply delightful. These are very affectionate animals that like to be held. When they are on their trees of their enclosure, they generally hold each other except when sleeping. It was a cool day, which makes them more active. Holding a koala is remarkably like holding a happy, relaxed 6 month-old human baby. The very act releases oxytocin and makes everyone happier. 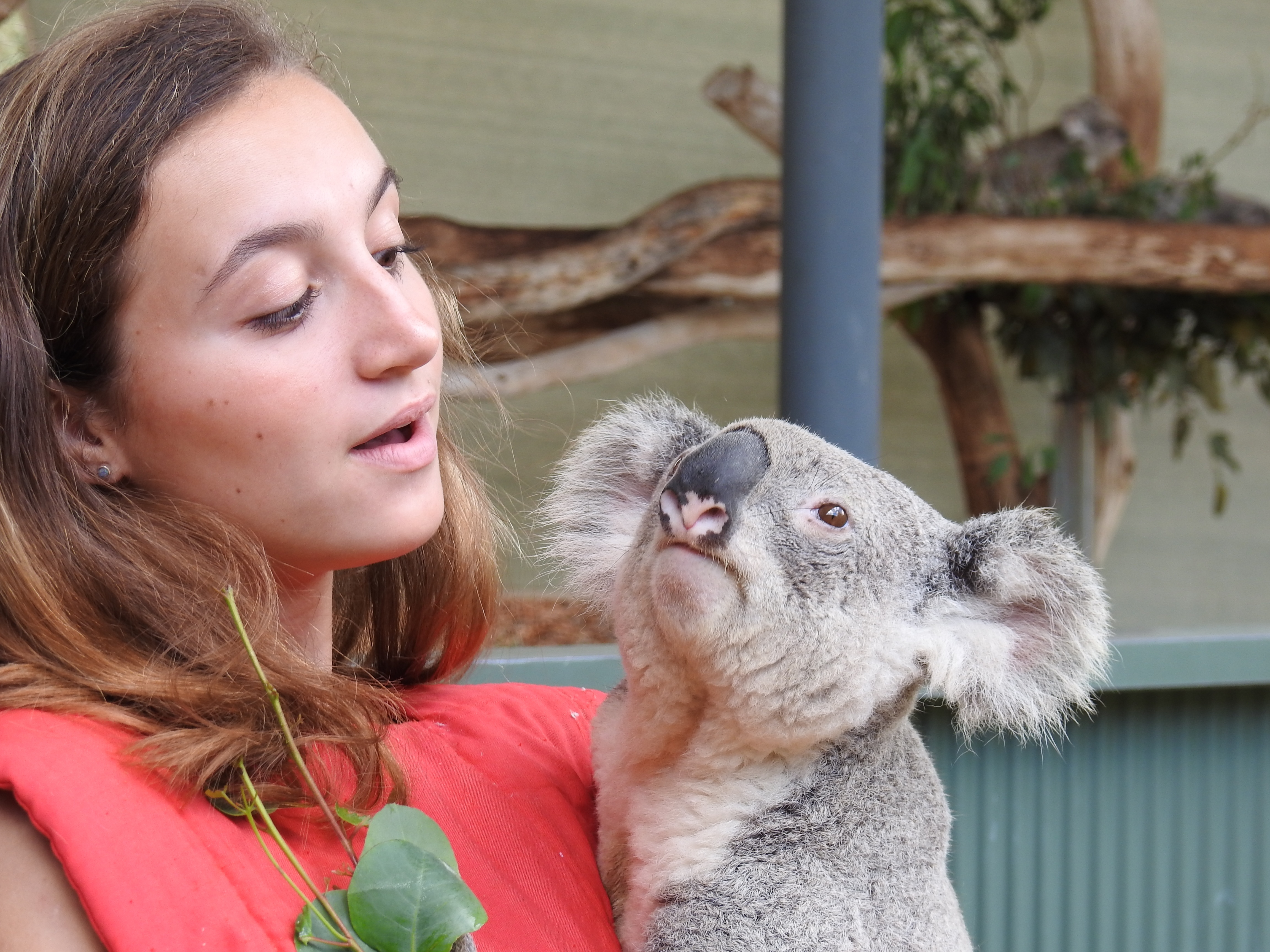 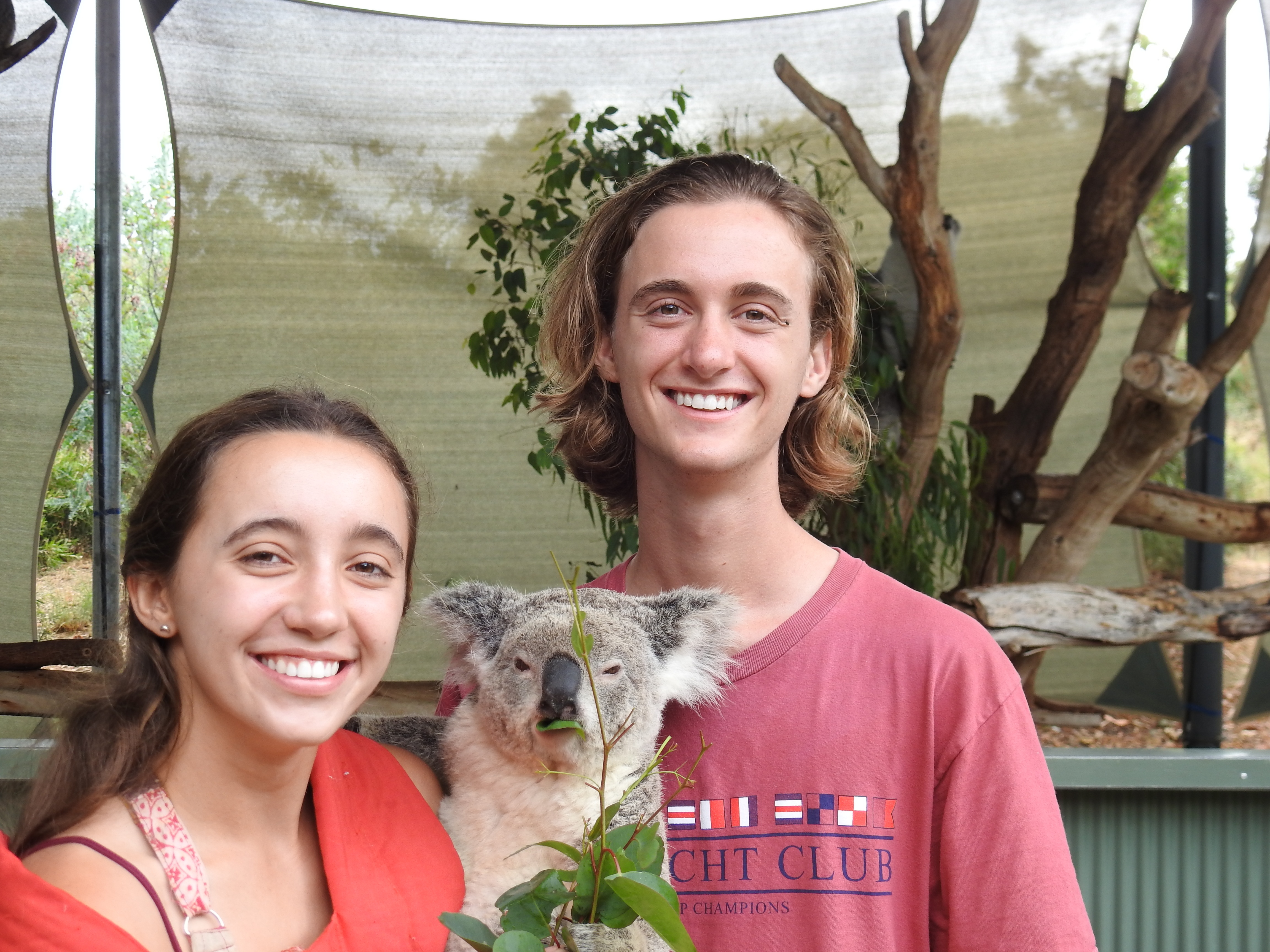 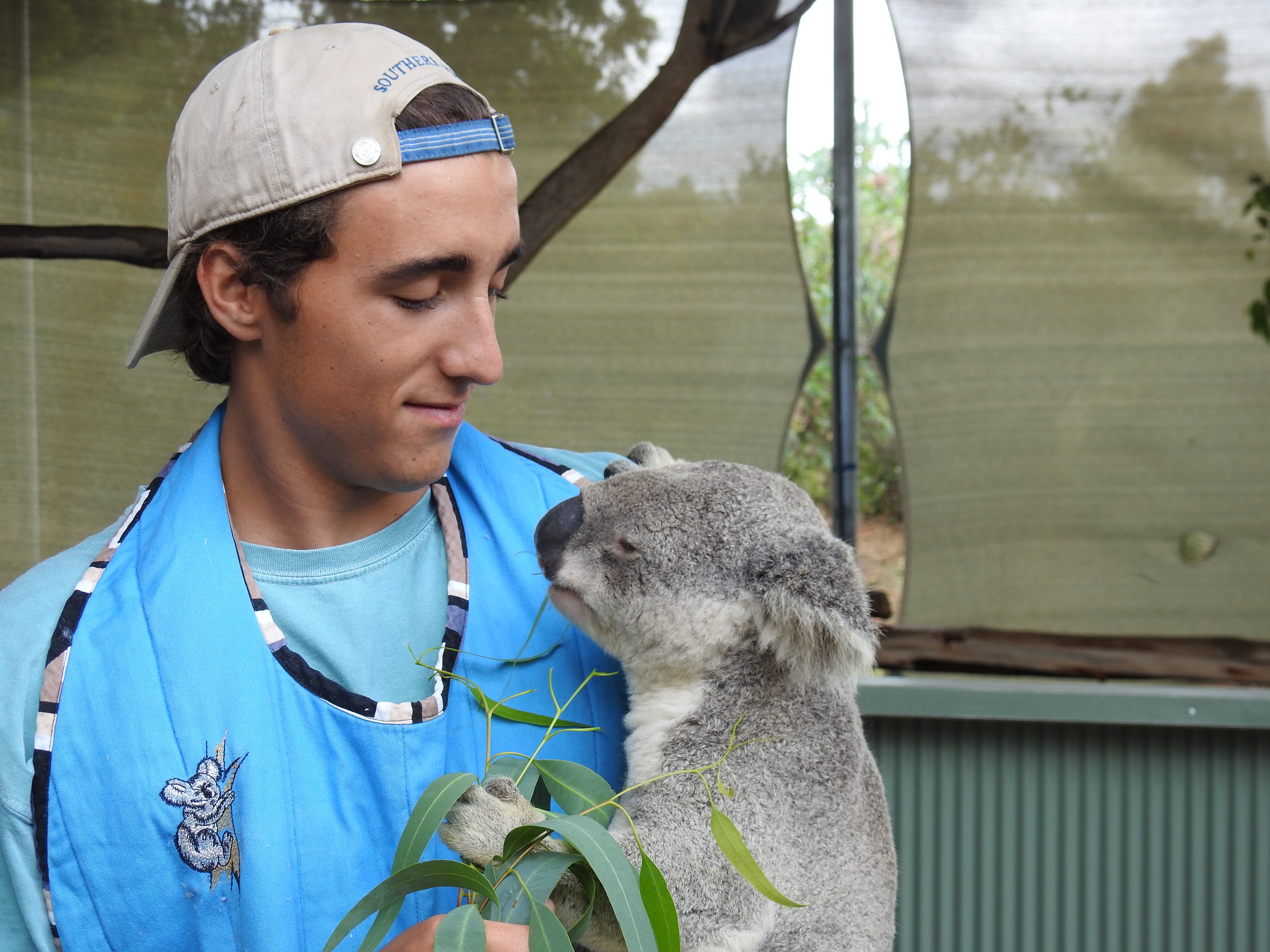 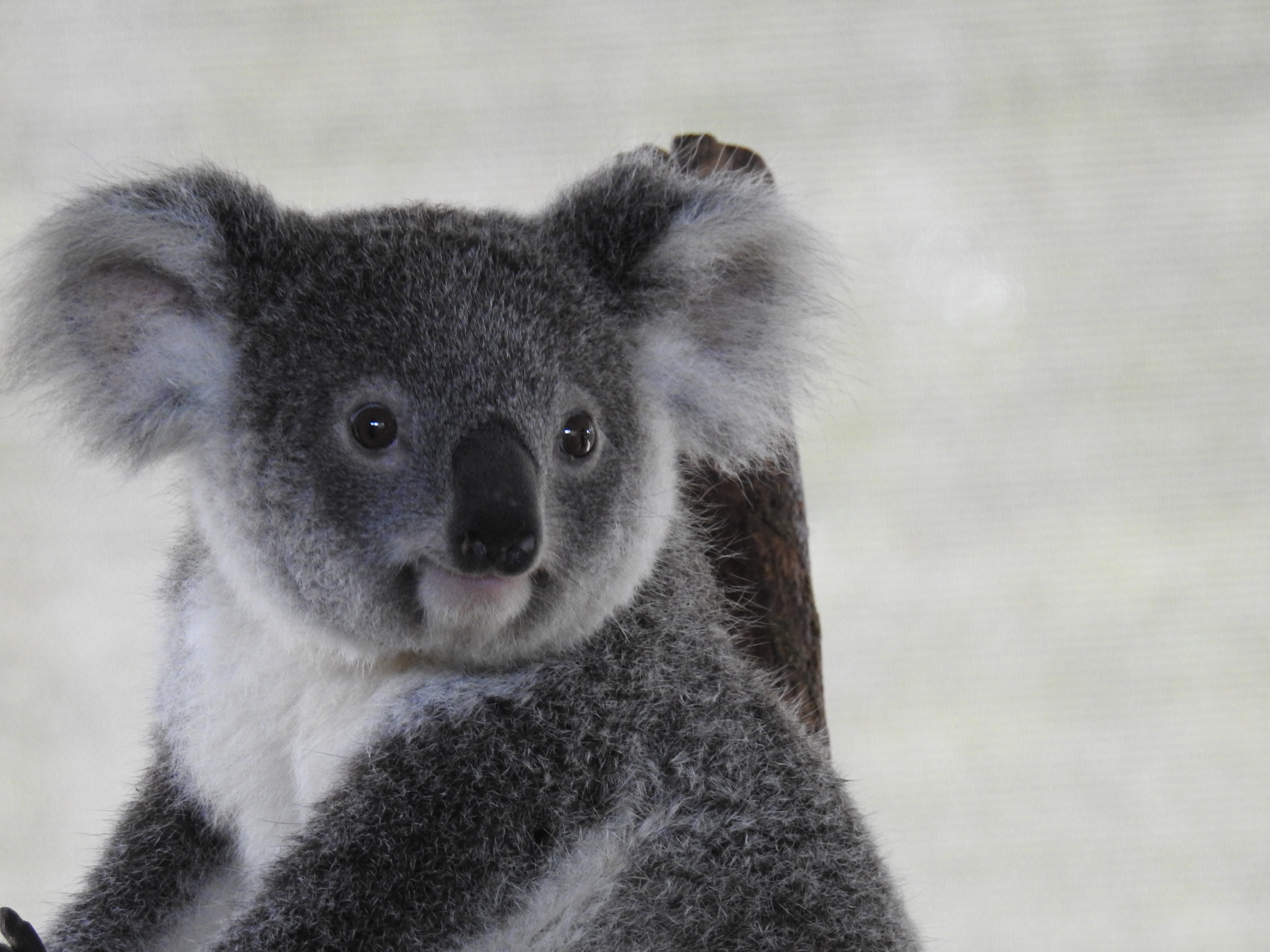 But the rest of the park also amuses, though in an odd way. In addition to some typical Aussie animals (kangaroos, black swans and dingoes), it was a confusing mish-mash of creatures.

I enjoyed seeing this joey pokes his head out of his mom’s pouch. 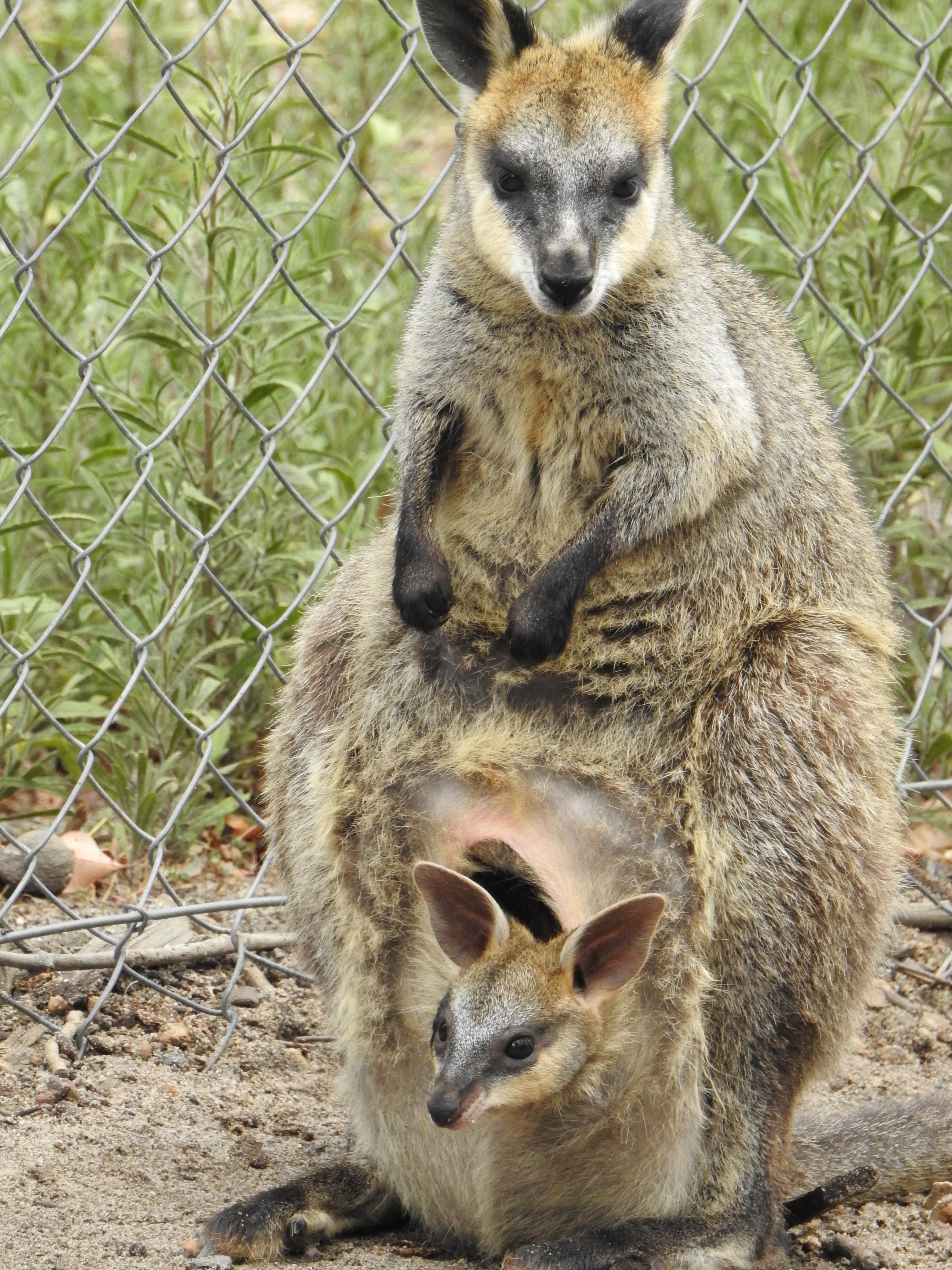 Here is one really mad dingo. 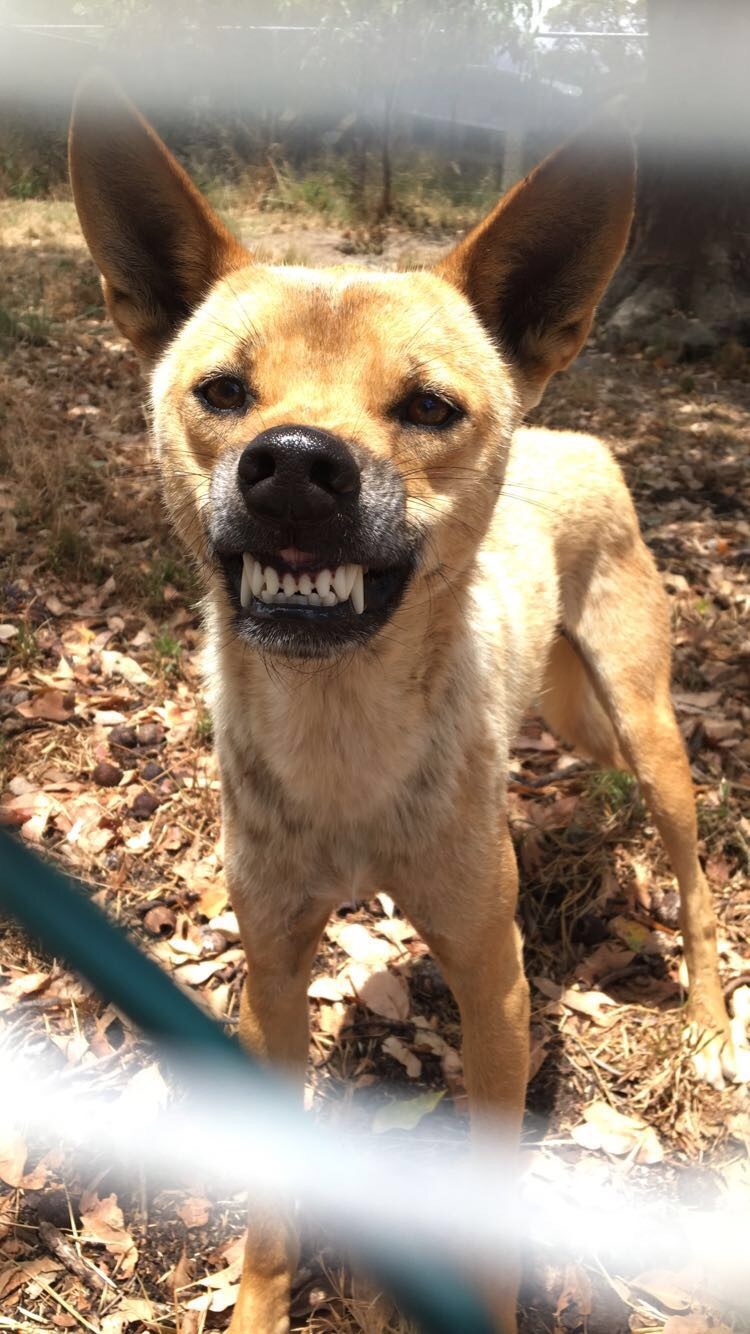 They had horses, goats and pigs – very farmlike. They had an array of very vocal birds willing to talk for popcorn. A slew of peacocks (including one albino) walked the property. 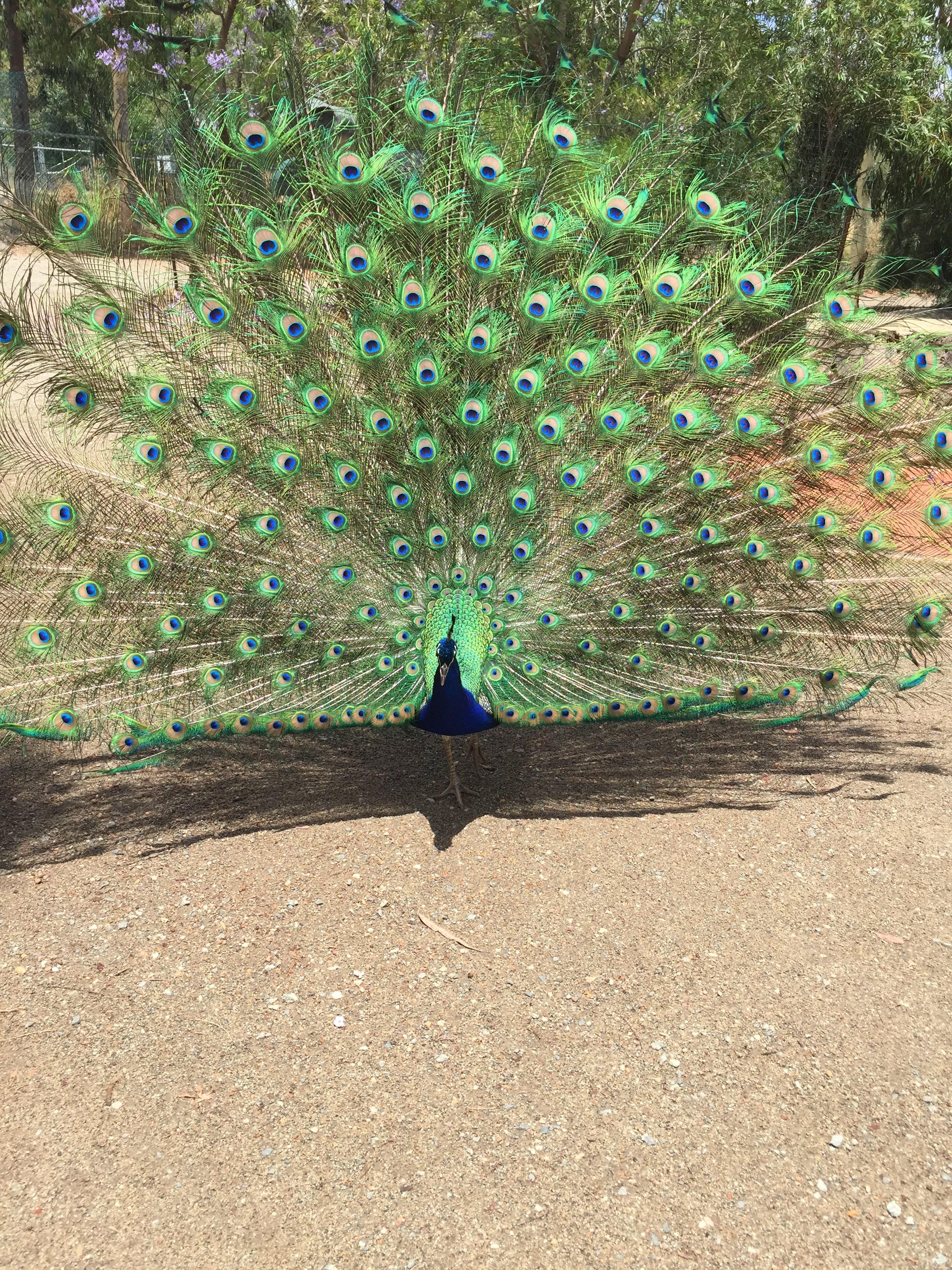 They also had this guy: the echidna, or spiny anteater. This odd fellow and the platypus are the only monotremes (mammals that lay eggs) in the world. 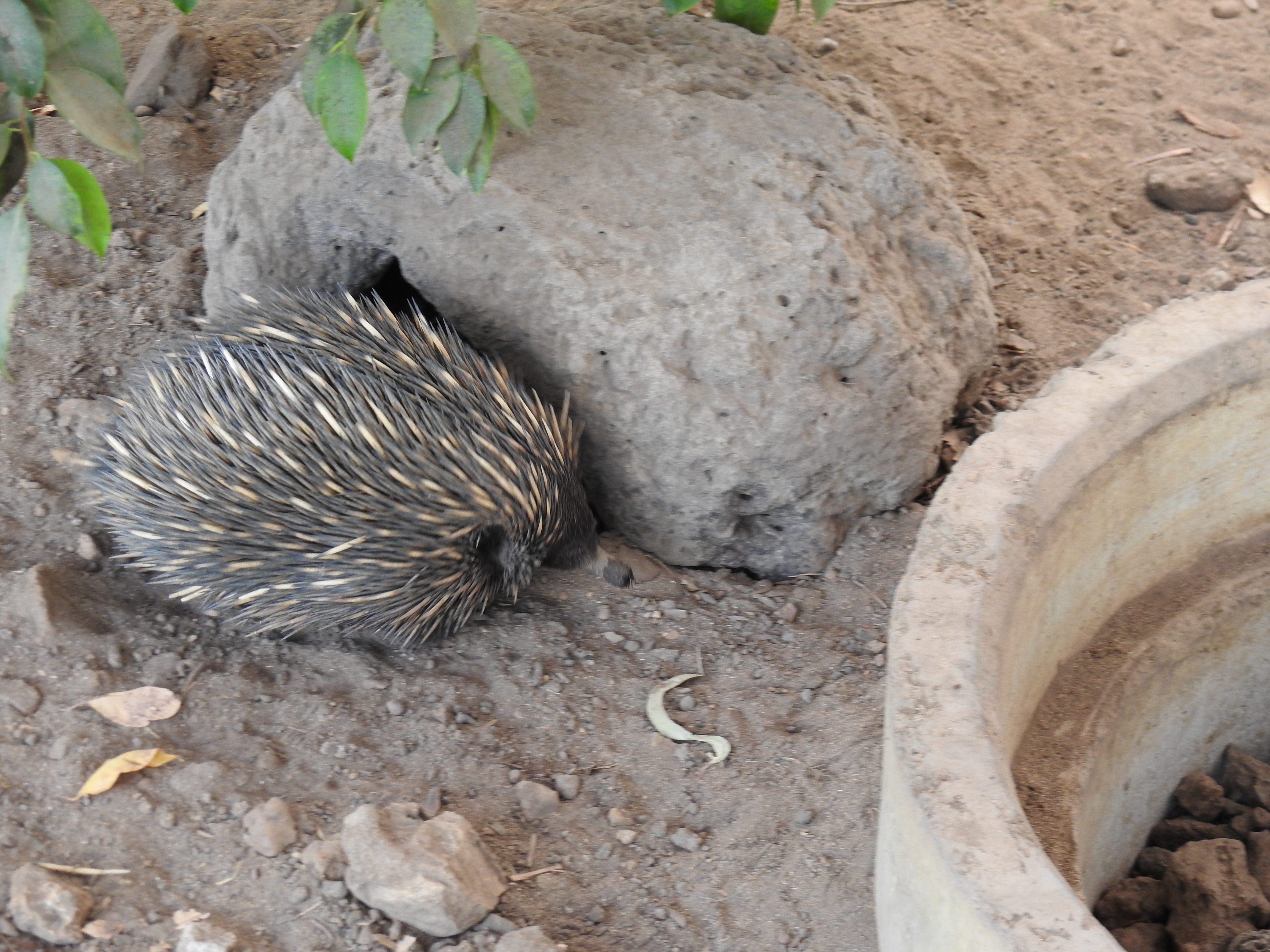 But the park had another element – a vast (and essentially inexplicable) array of sculptures. Some of the sculptures featured “dangerous creatures that live no more” like a sabre-tooth tiger and dinosaurs. 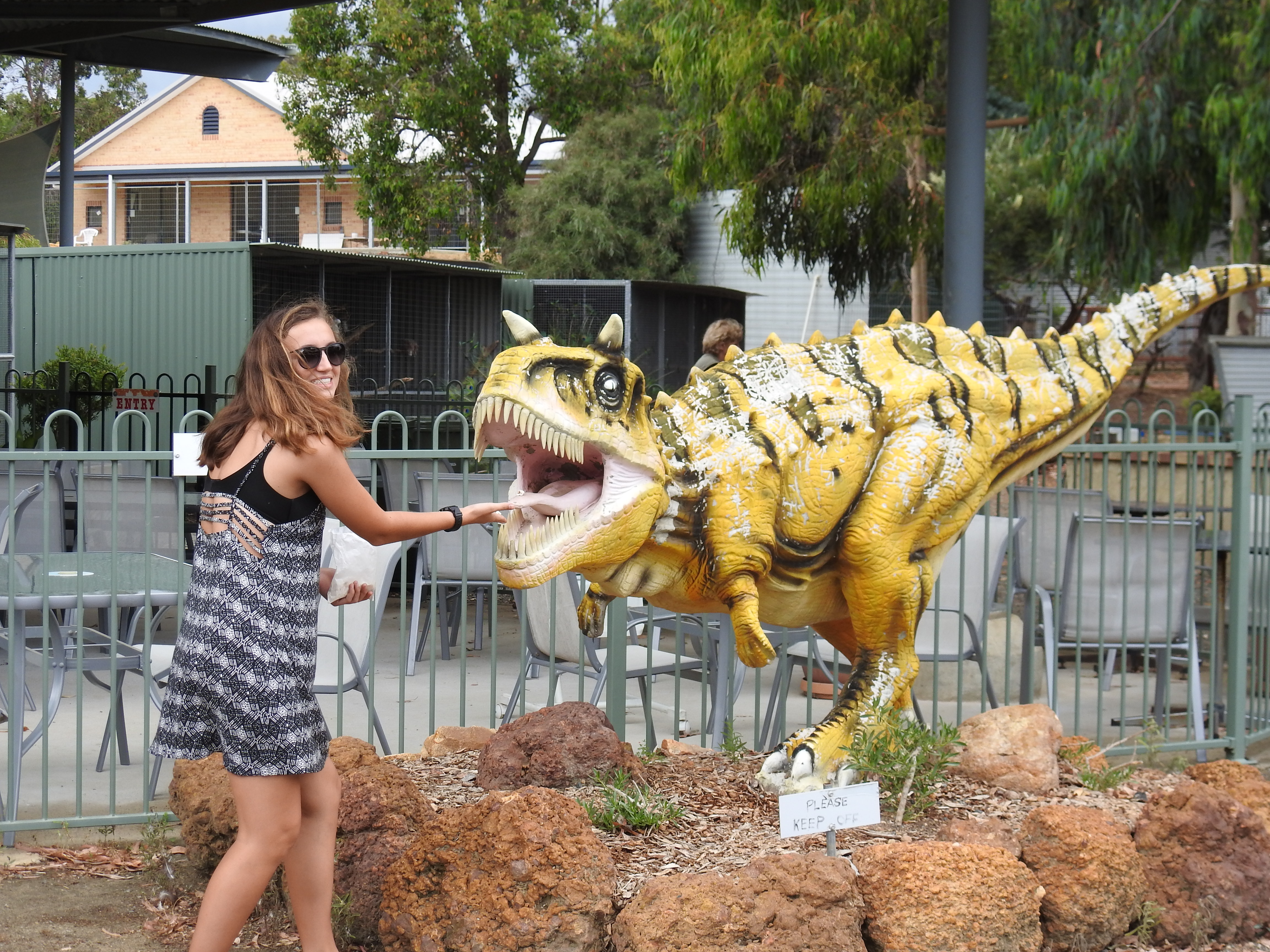 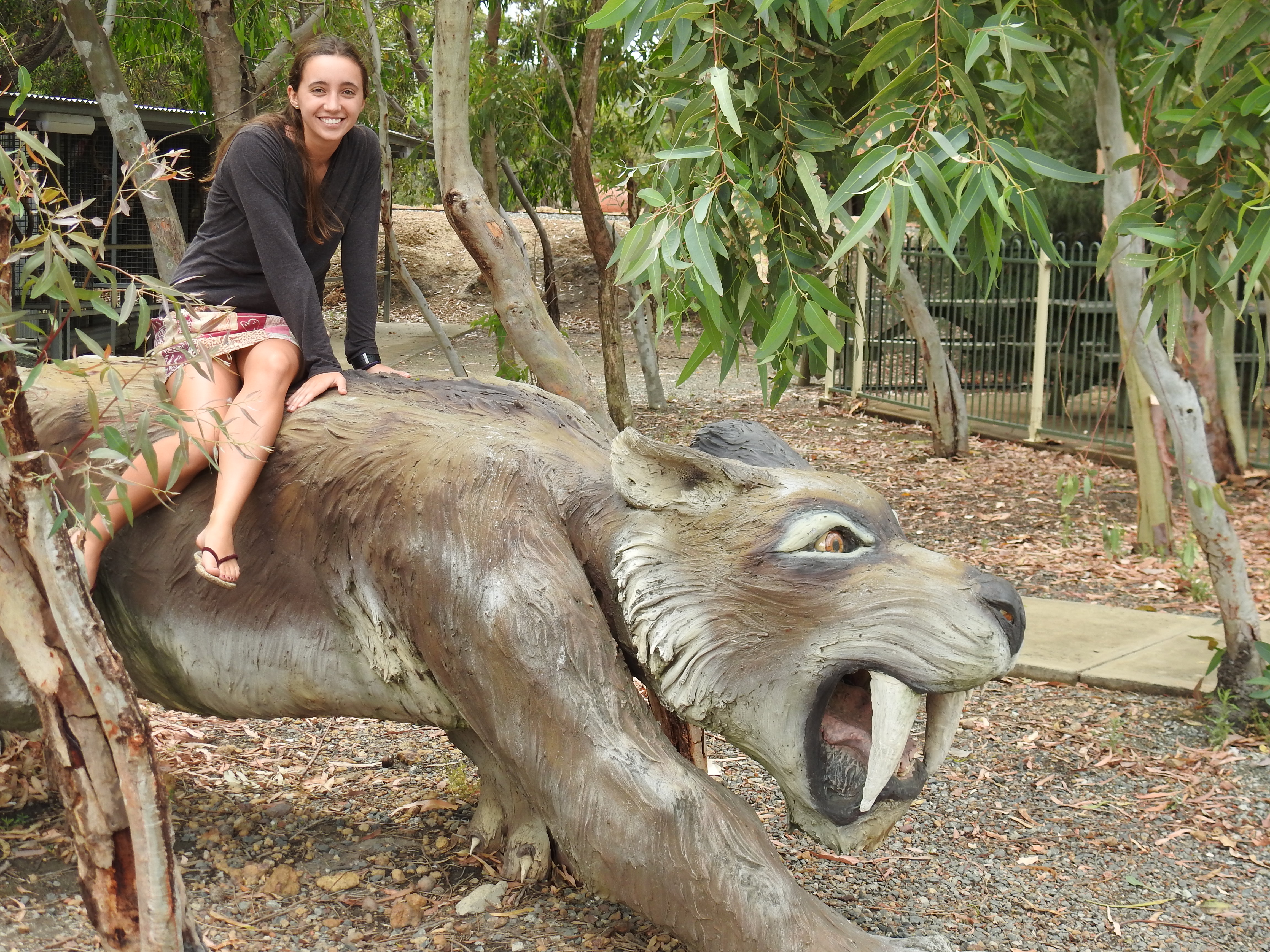 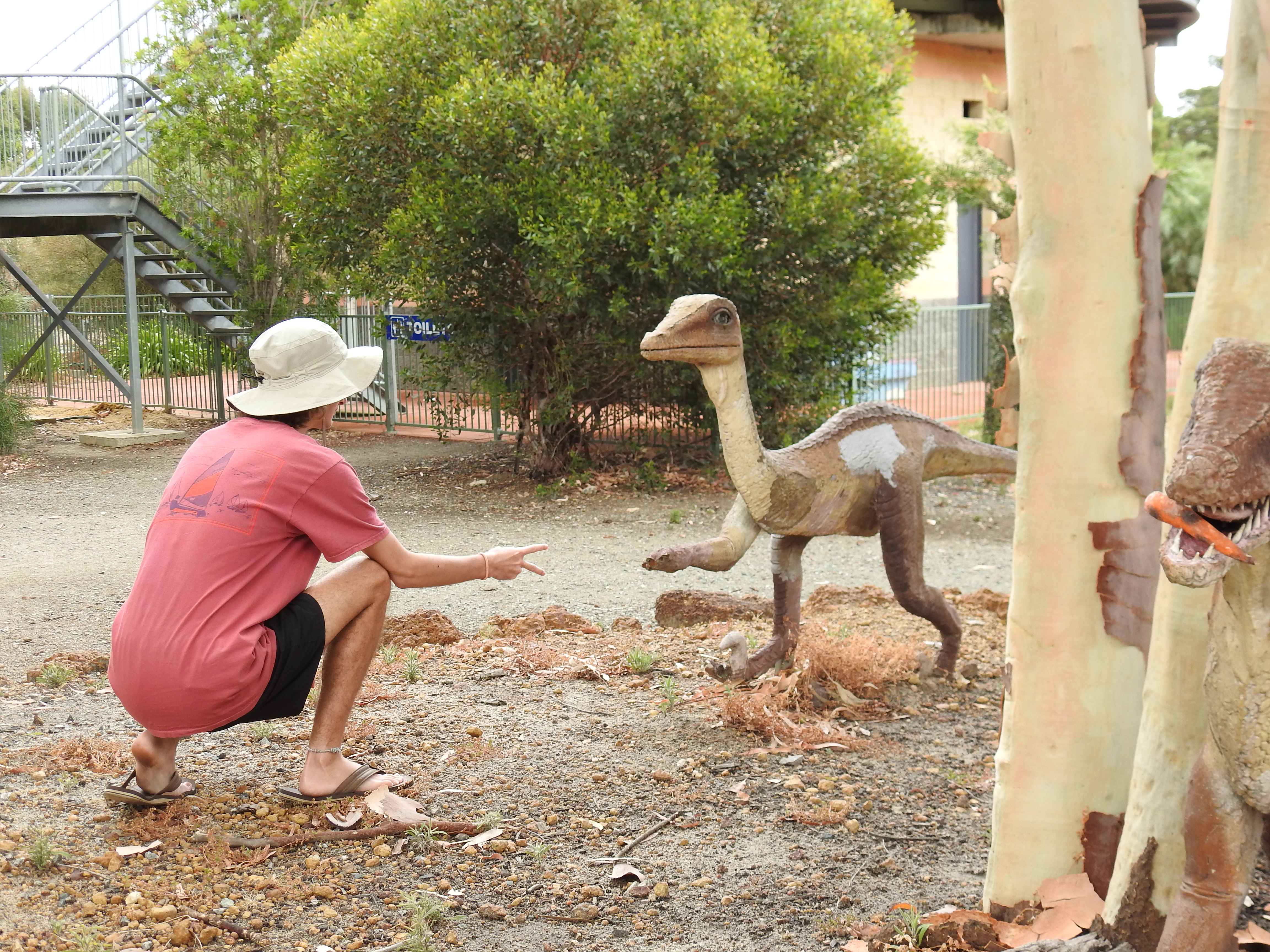 [Note: Wiley won every game of “rock, paper, scissor” with this guy.]

They offered a pack of giant scorpions. 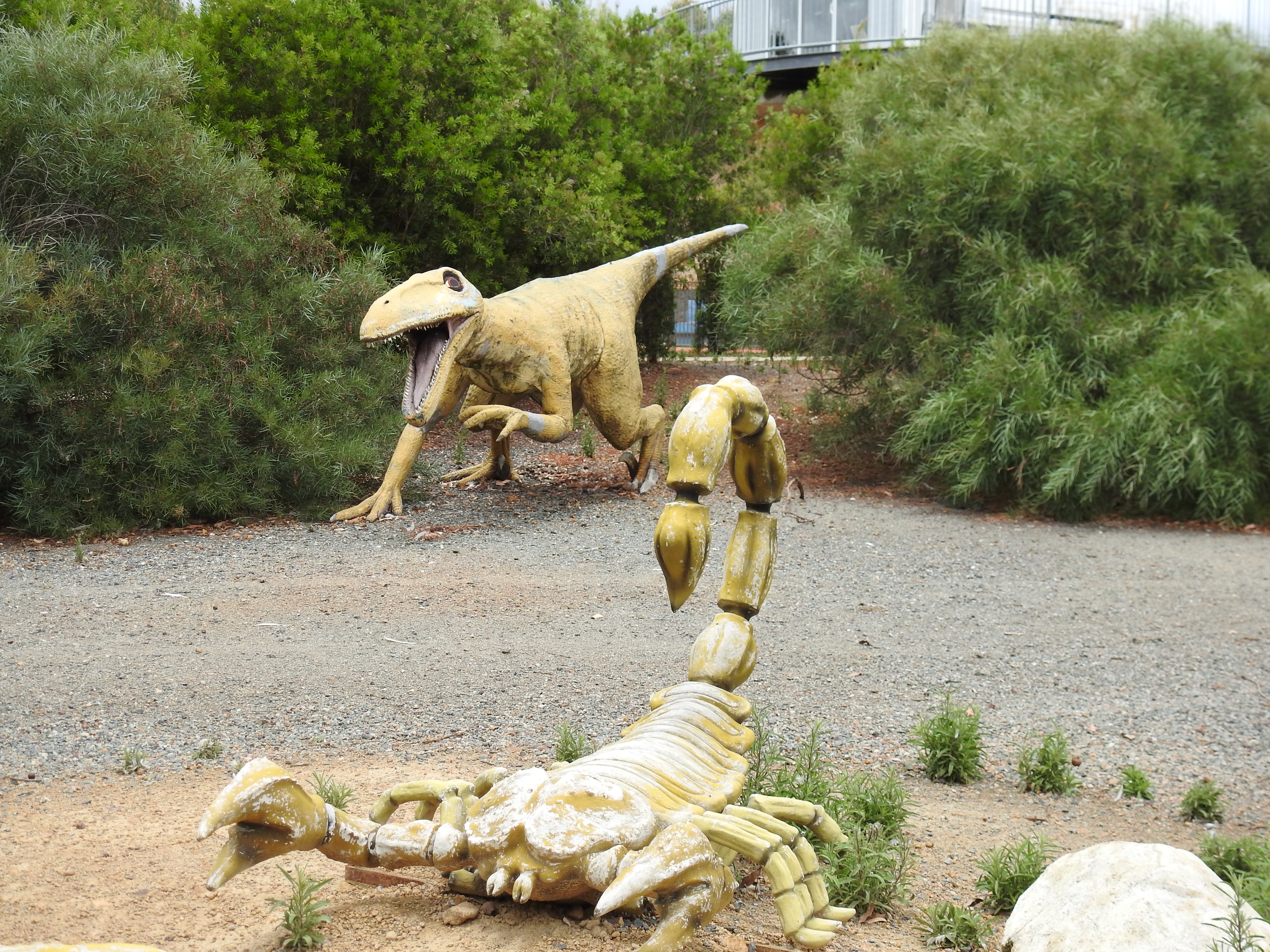 They also dabbled in the whimsical, with dragons (both playful and serious), 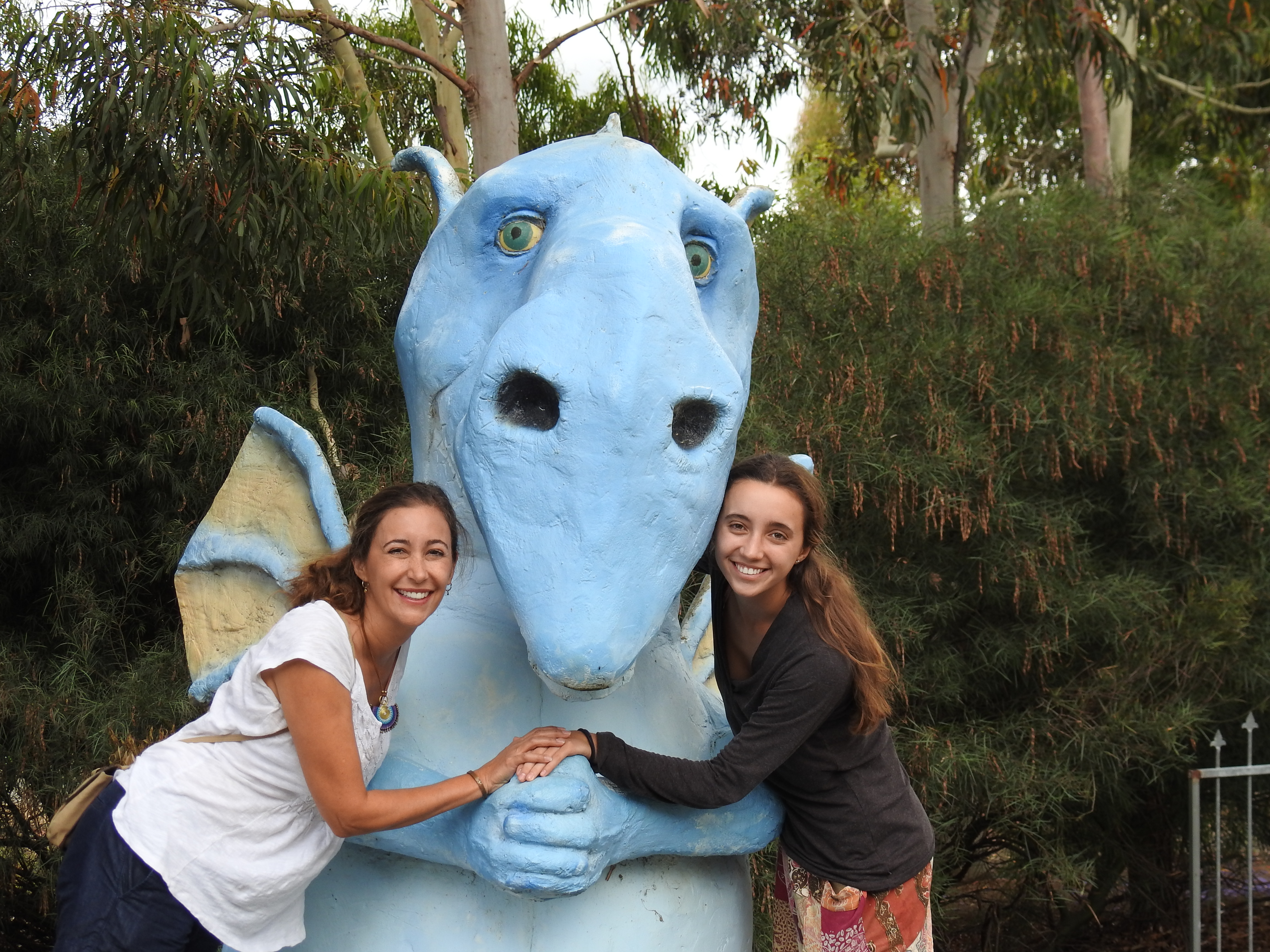 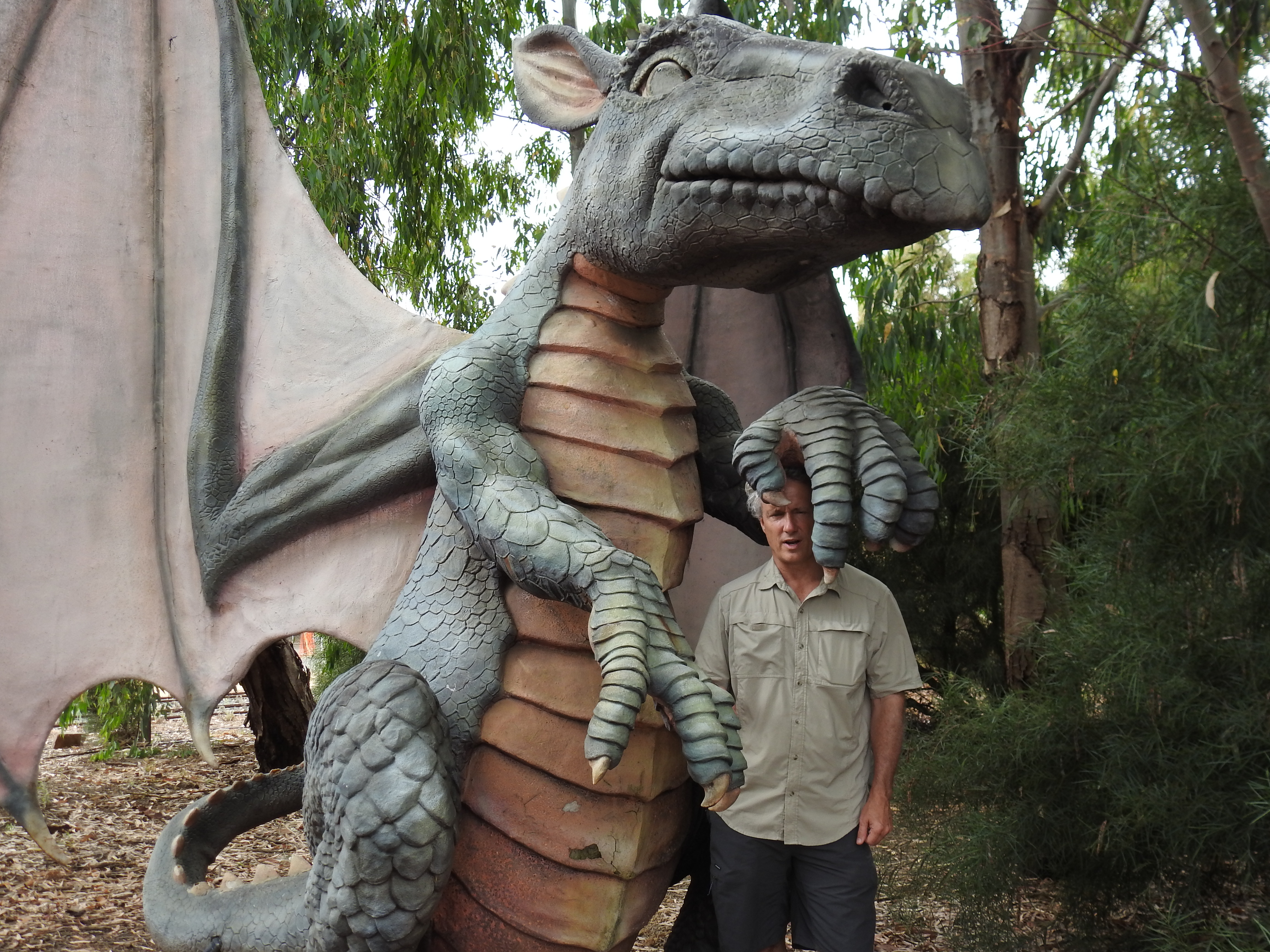 a laughing family of bears, a giant rodent 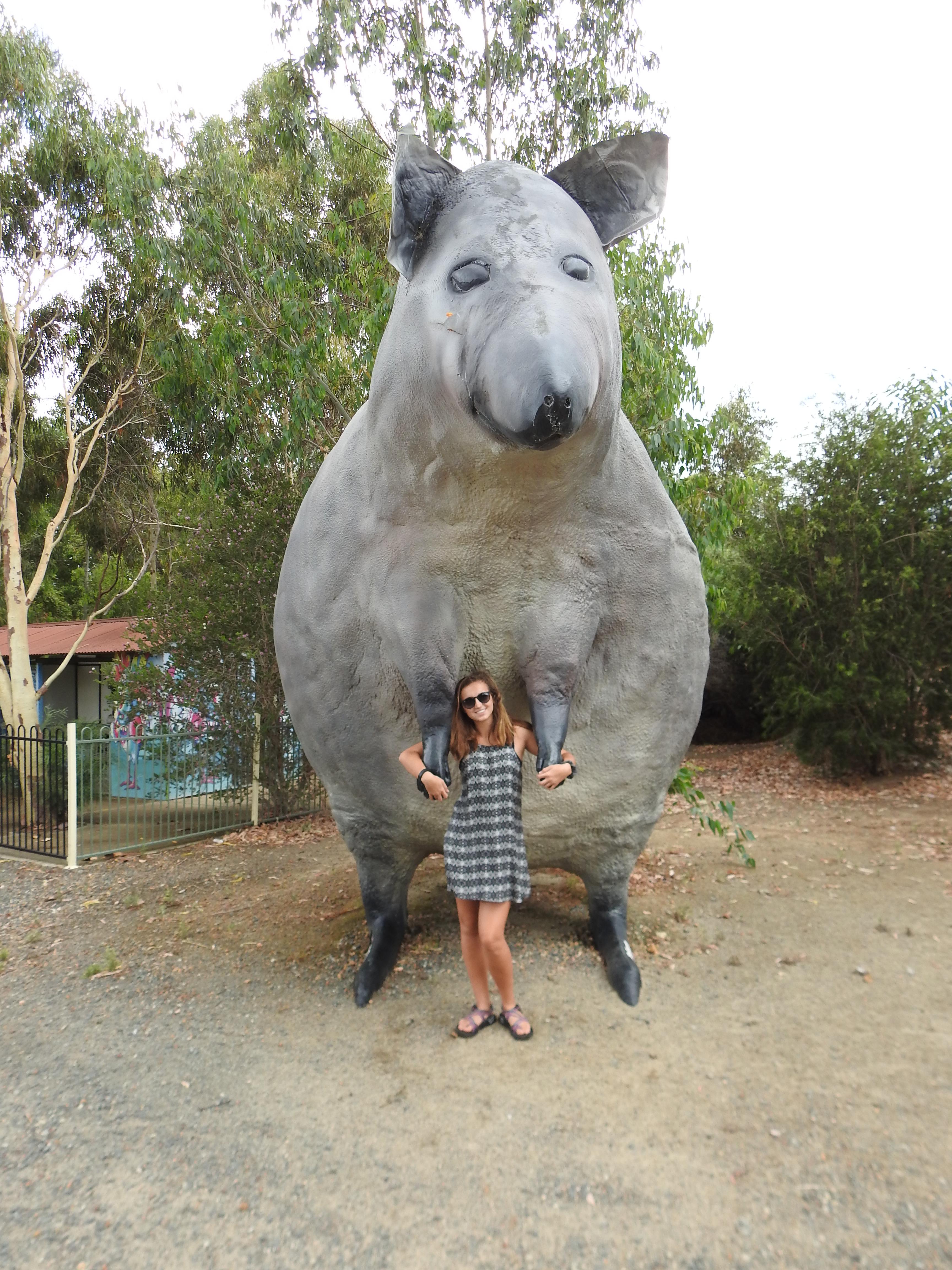 and perhaps the creepiest Humpty Dumpty in the world. 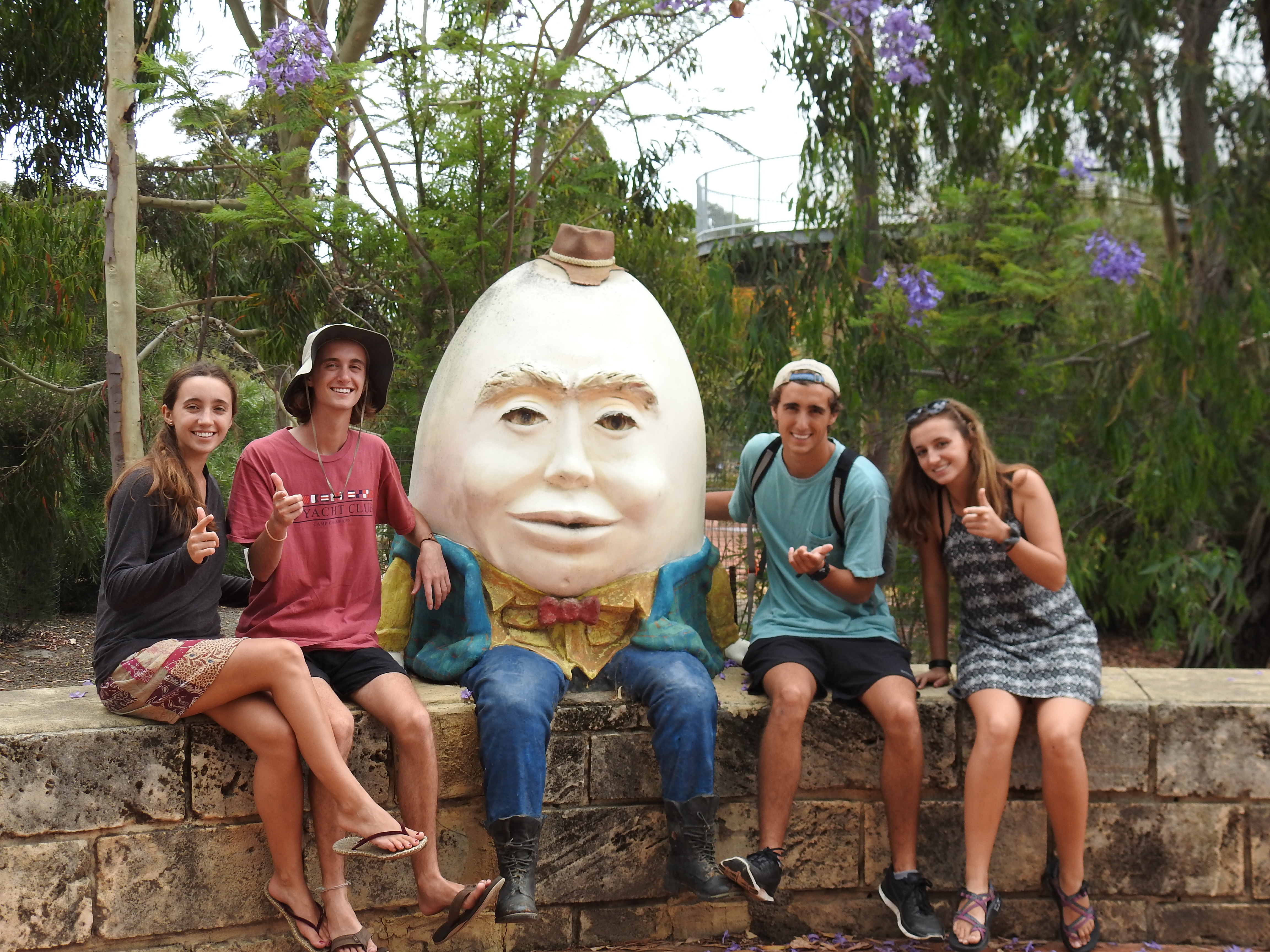 I could have seen us hating this place, but the kitsch became charm. We learned a huge amount and had a blast with the employees. We also felt like we had found the ultimate “roadside attraction”. Forget the Cadillac Ranch or the Worlds Largest Ball of String, we got to hold perhaps the cutest animal in the world while also posing with dinosaurs.

That is a day well-spent!