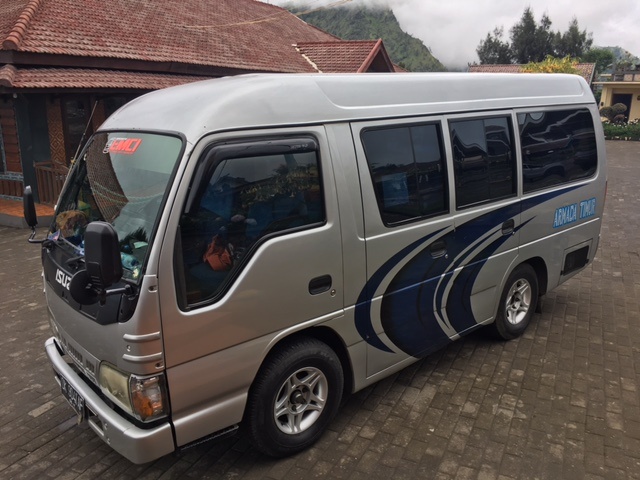 Yesterday, I espoused the virtues of relaxation and spending time apart to encourage family harmony. I told you it was a great idea and that we benefited meaningfully from our time in Bali. We might have benefited from an additional day there, but we are instead returning to form.

Yes, togetherness and discomfort are back on the menu.

When we were in Myanmar, we met a couple that had just come from Indonesia. We asked them about their recommendations. We were trying to decide whether to stay in Bali or add another island (like Java or Komodo) to our two weeks in Indonesia. They told us that the highpoint of their trip was hiking some live volcanoes in East Java.

We had been debating whether we should take a day hike to the dormant volcano on Bali or visit a live one. Our newfound friends tipped the scales toward the seeing the real deal.

At the time, we were in full adventure mode. After all, you will never confuse Myanmar with a resort. Taking time to island hop sounded great. We would see a different island and check out one of natures most impressive sites – a real volcano.

There is some chance that we fell in love with the idea without fully grasping the travel challenges associated with getting around here. Like so many other under-developed countries we have visited, Indonesia has seen a huge explosion of motorbikes and cars without any meaningful growth in roads and other infrastructure. As a result, everything is connected by two-lane roads (which, by the way, are devoid of shoulders). On these roads you will see ox-drawn carts, bike, motorcycles (often with a full family of 4 or 5 on it), cars, vans, busses and freight trucks.

Since there are no passing lanes, the key to efficient driving is to constantly pass people in front of you while (and this part is important to remember) not hitting any of the oncoming traffic (who are also passing each other coming toward you).

A few days ago, I was marveling at how fluid the driving is here and also how accommodating the drivers are. If you were to inject a little LA Freeway road rage into these roads, you would have massive accidents hourly. As I was noting how oncoming traffic would either pull over slightly or slow down to make sure that you can complete your pass, I chose to comment to the family.

As I was pointing it out to the family, I decided to point to an oncoming truck to show to demonstrate the kindness. The truck, however, was not interested in confirming my point. The driver did not make addition room for us, nor did he slow down. Our driver accelerated and began to swing in front of the car ahead of him. At that moment, the two vehicles clipped sideview mirrors.

I have decided not to make anymore verbal comments on the traffic here.

But I do think I can write about it.

So our journey today entailed the following:

Yessirreebob, we are free of the pesky comfort of our first week in Bali.

The photo at the start if the blog is the second, more luxurious vehicle.  It still lacks seatbelts, but you cannot have everything.  Our driver, Toto, is quite skilled and much more aggressive than our first friend who drove the failing van in Bali.  Actually, those seatbelts might not be that bad an idea . . .

Since the entire day is essentially the drive, I have little to report except for three observations from our bus.

First, the Hindu temples are gone and are replaced by mosques. No surprise there.

Second, the government buildings in Java are very large and impressive, with a hint of communist architecture. That fact and the constant campaign banners everywhere suggest that being in government might be quite remunerative to the victorious “public servants” that run the government. I know, Shocking . Who would have thought that a government in an underdeveloped country might have some corruption?

Finally, we have seen over a dozen cemeteries. Of course, there is nothing unusual about that. But that made us realize that we had not seen any cemeteries in Bali. Once again, here is the influence of Hinduism showing up. The Hindu funeral ceremony involves cremation. When we were in Nepal, we saw several funerals in various stages of completion and managed to get a few pictures. Hence, no cemeteries.

This also reminds me of an odd fact we learned in Japan. At some point in the 1970s or 1980s, the government realized that they were running out of space for burials. So the government strongly requested that all citizens choose cremation rather than burial. We were amazed to learn that within years, over 99.9% of funerals became cremations. The Japanese are very conscientious citizens. That, combined with soaring costs of burial plots, led to a complete change in the way that their country deals with death.

I hope we will have fun at the sunrise volcano climb. Susie and I are looking forward to it.

That makes two of us.