Finding Truth in the Rain 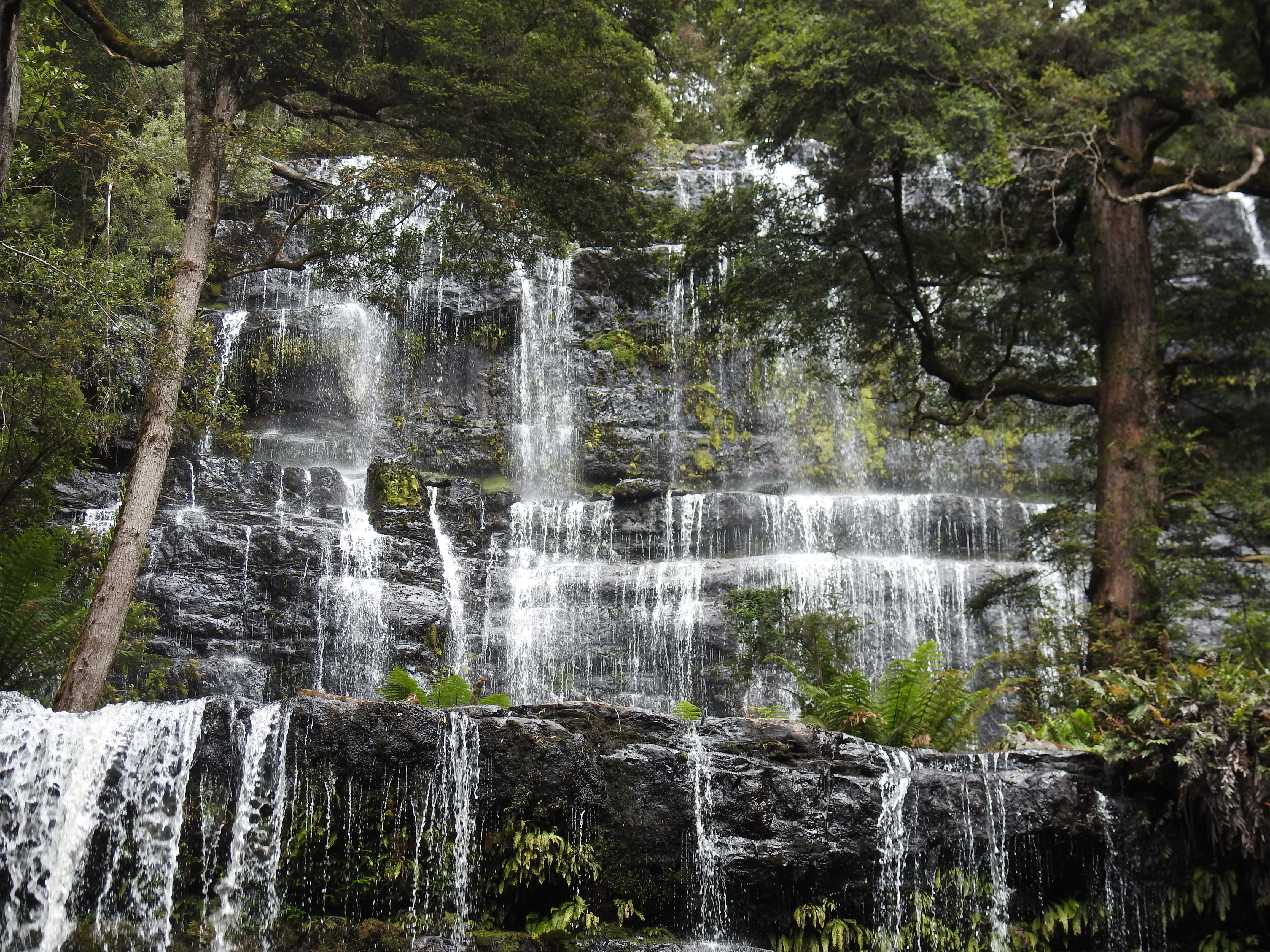 Occasionally, you get a brief insight that helps you be less jealous and a tab bit wiser.

For example, as a child, I imagined it must have been awesome to be royalty. Being the King of England sounded just fine, thank you very much. For me, I particularly fancied my reign happening during the age of chivalry, with castles and knights.

I held onto this dream until the first time I visited a castle during winter. It was damp and cold. I am not talking about the “my, I could sure use a jacket” cold. This was cold that crept into your bones and made itself a resident.

The bloom started to go off the royalty rose, but being king still sounded pretty sweet. Then I read about the plots to murder royalty and undermine the royal court. Then I started to piece together some basic facts about sewage and the lack of antibiotics. I eventually realized that being king was no great blessing.

Compared to a serf, it was great. After all, the king is top of the heap. It just took me a while to see that it was a dung heap.

Similarly, my tendency to romanticize adventure travel has encountered the reality of the world. For example, I once thought it would be awesome to climb Mount Everest. But a day of walking uphill combined with an unpleasant experience with altitude sickness quickly cured me of that idea.

The dream that died today was the idea of walking the Appalachian Trail. I love hiking and I love nature. I also admire the determination and independence that I associate with those who take that challenge.

Frankly, I was even holding onto that dream yesterday. We had a delightful couple of walks. One was through Mount Field National Park and another took us to a major dam. Here are a few pictures. 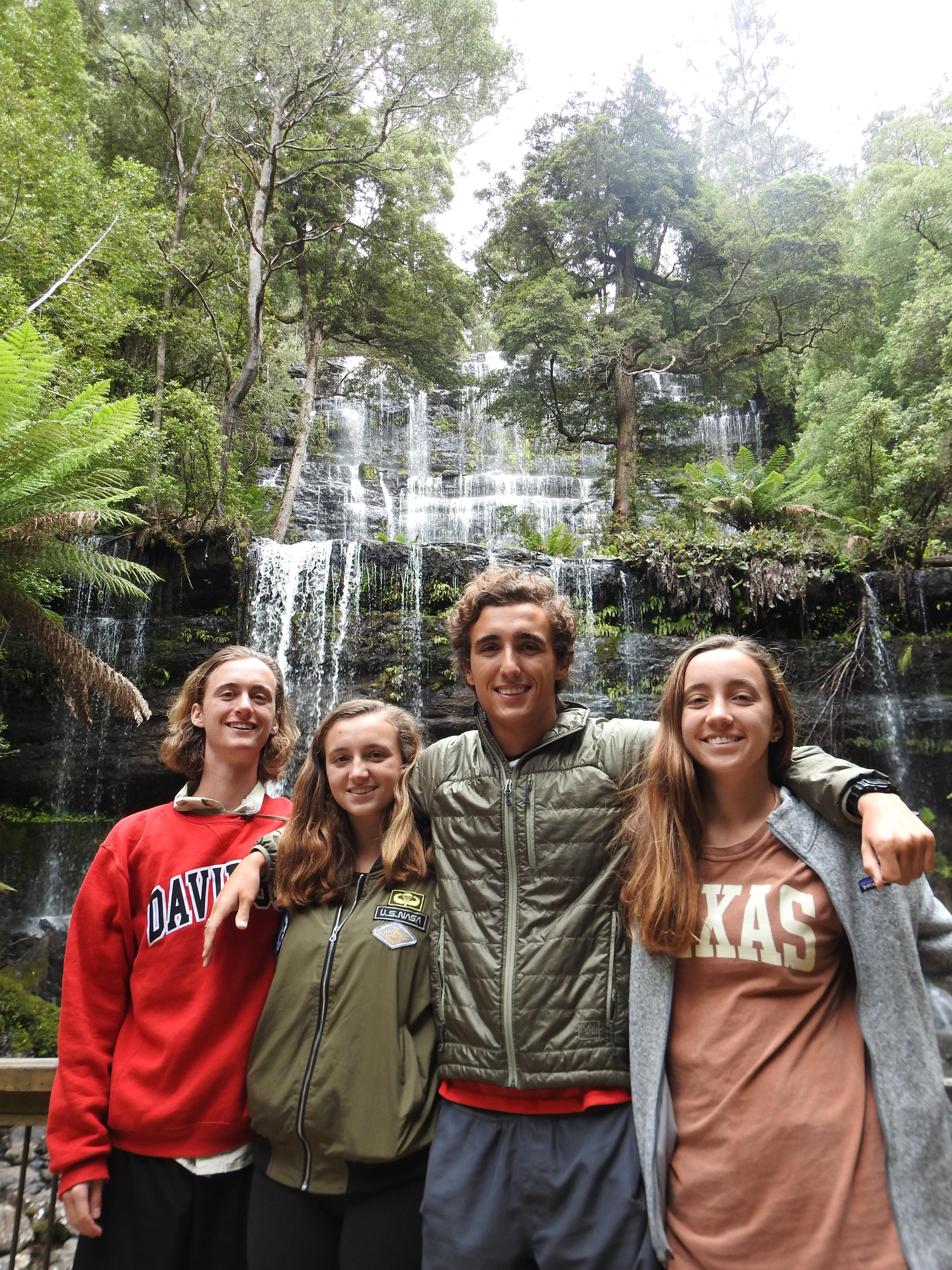 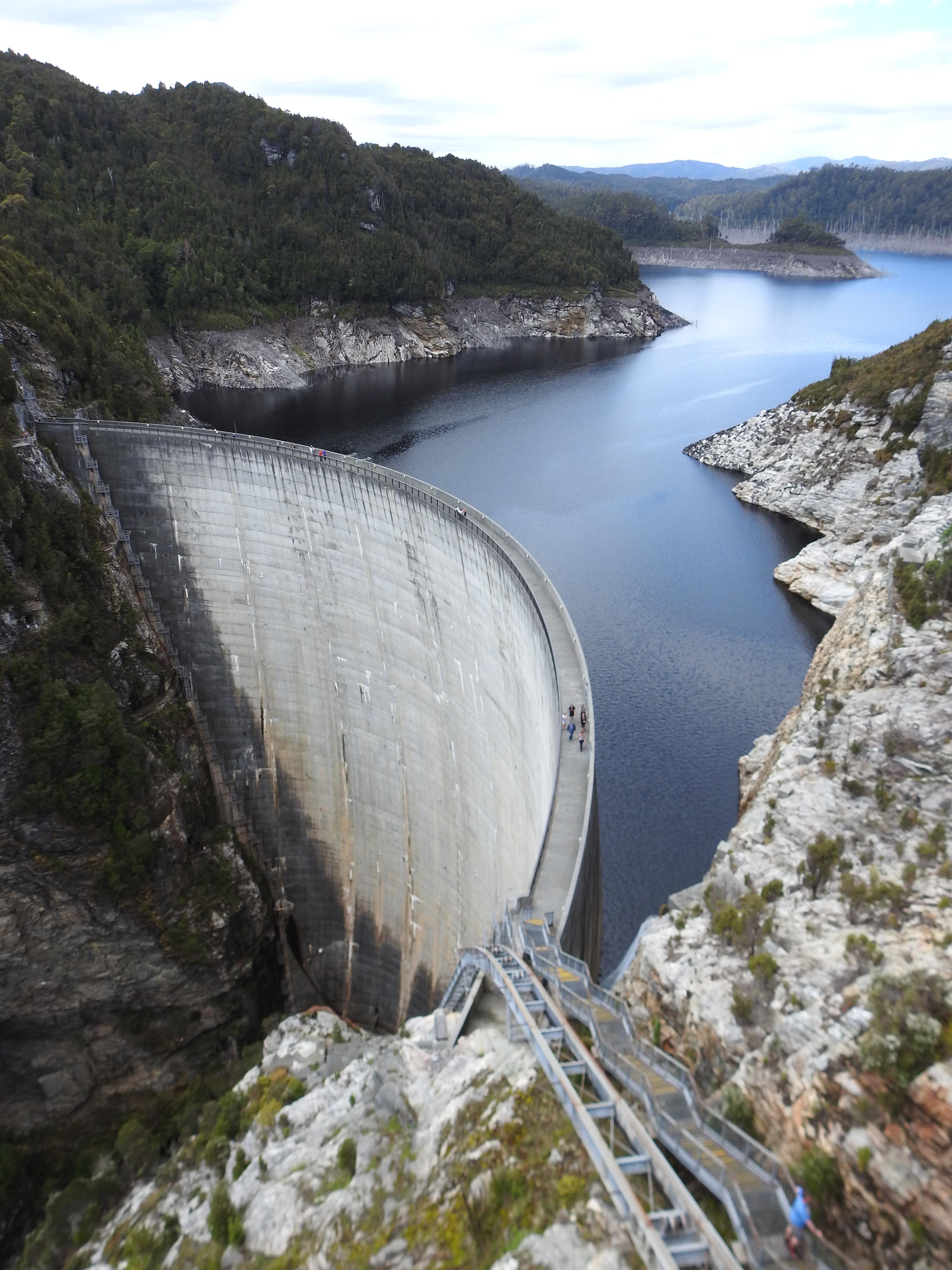 [Note: while at the Gordon Dam, Susie and I met a fellow sightseer who was incredibly knowledgeable about the dam and the entire Tasmanian hydroelectric industry. He informed us that 100% of Tasmania’s electricity is from hydroelectric. The island even exports electricity to the rest of Australia. Full of interesting tidbits from our talk, we started to share our newfound knowledge with the kids. “Stop”, Wiley said. “Is anyone else going to point out that it is just weird for an employee of a hydroelectric company to visit their dam? School teachers do not hang out as the school yard on days off!” Point well made.]

We had a lovely dinner at a place that struck me as odd. It was the gas station, the visitor center, the dam information center, gift shop, hotel and restaurant of the town. 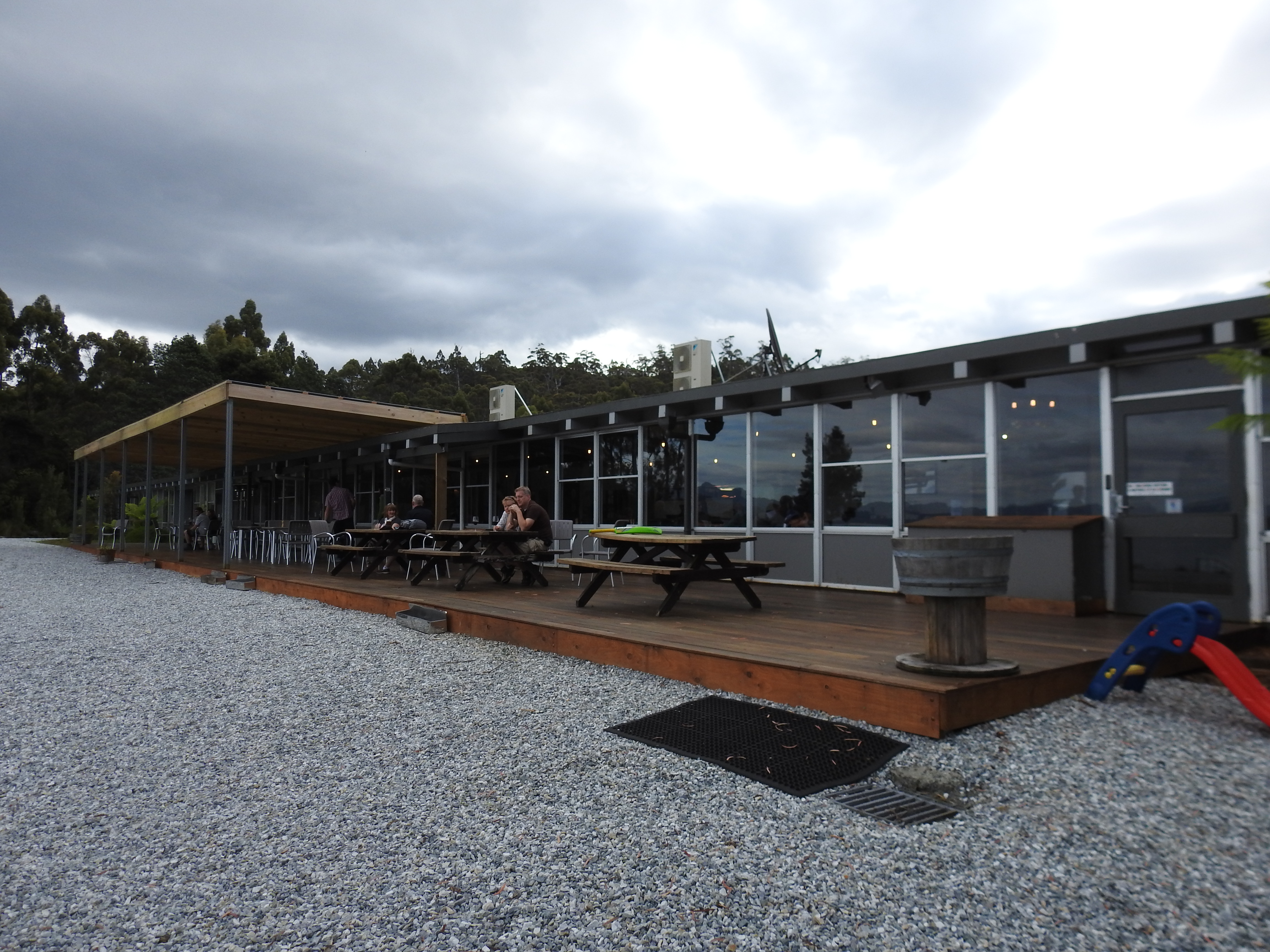 It boasted a great view. 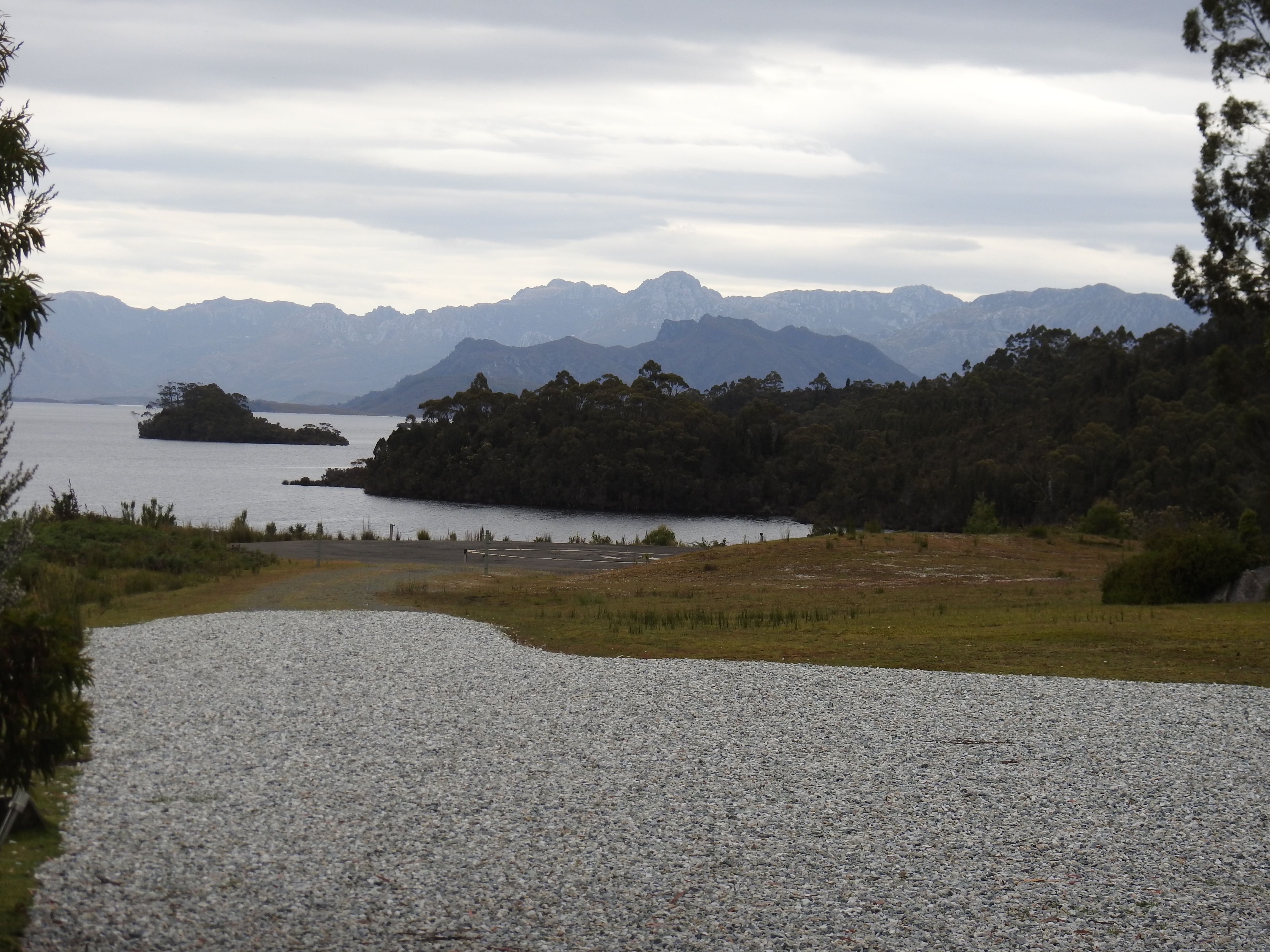 The accommodations were very inexpensive, but the restaurant and bar were fully priced. This struck both Susie and me as odd. It would become clear a little bit later. As we enjoyed the view, the wait staff gushed about what a glorious day it was. We had certainly loved our walks and the weather.

After the family went to bed, I decided to work on my blogs, so I was sitting at a picnic table writing outside. I struck up a conversation with one of the waiters who revealed that he had recently finished a 5-month trek down the South Island of New Zealand. He was researching 1-2 week treks in Tasmania.

I felt like a bit of a wimp. I connect with nature in 1-4 hour chunks and stay in inns or hostels. I only carry a day pack for water and sunscreen. But here was a MAN. A man so in touch with nature that he can walk for 150 days with his home on his back. Free of the comforts that make me soft, he can plumb the depths of his soul – contemplate the meaning of life.

It is noteworthy that nothing in our conversation suggested that he had gleaned any true insight on his massive trip. When I asked for him to describe it, it sounded staggeringly mundane, “I would wake up, grab a bite, pack up and walk for 8-12 hours. I would then make camp, eat and start again the next day.”

While he did not mention any insights into meaning or existence, I continued to hold onto the idea that he was, in fact, deeper and wiser than I. He was just being nice to make me feel better.

. . . When we were awakened by the massive rainstorm.

Lying happily in our dry, warm bed, my mind alit to my hiking buddy. Suddenly, my romantic vision of long hikes evaporated. He did not spend time contemplating his place in the universe – he spent hours trying to stay out of storms and finding ways to dry at least one pair of socks. At that moment, I knew that the Appalachian Trail is not in my future.

The motel was cheap because few people come to this area. A display in the reception area/visitor center describing the building of the dam explained that one of the challenges was the weather. It rains for 260 days each year. During the building of the dam, it rained every day for three straight months. So when we told Tildy (the very flamboyant owner of our Hobart hotel) we were going to see the Gordon Dam, she simply looked at us as said, “Why in the world would you want to do that?”

Here is the normal view from the hotel: 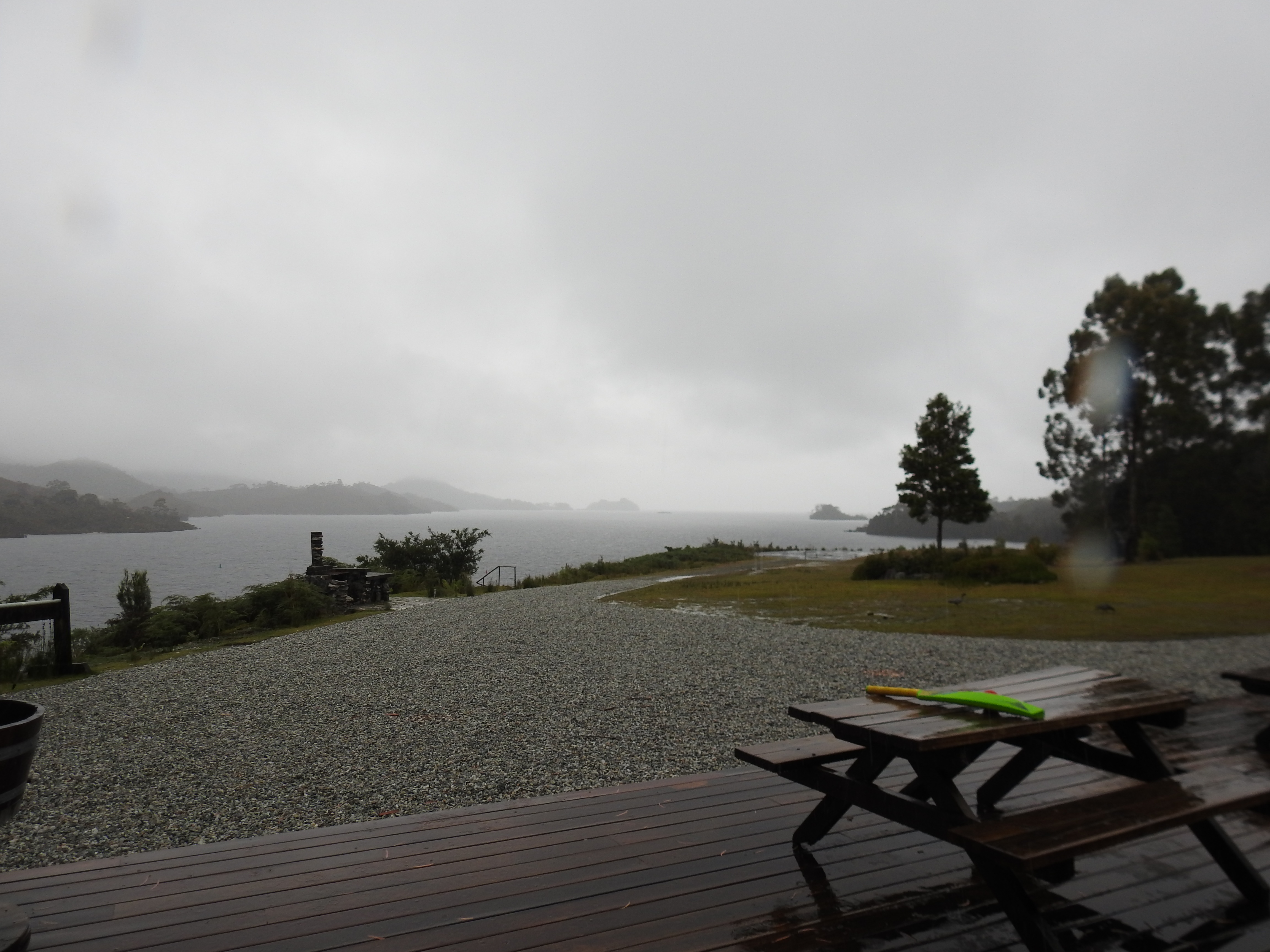 So the hotel’s low rate was designed to entice visitors to give Strathgordon a try.

The expensiveness of the restaurant/bar is a clever strategy. The cheap rates get you to the site and the weather keeps you there. With literally no additional options for entertainment, many travellers come to the nice restaurant, eat, play pool, eat again and drink the whole time.

The rain fell all day as we drove back to the drier part of the island (Hobart). The high point for us was feeding kangaroos at a roadside zoo and eating award winning meat pies at the Brighton’s Best Bakehouse (known for their gold medal pies). 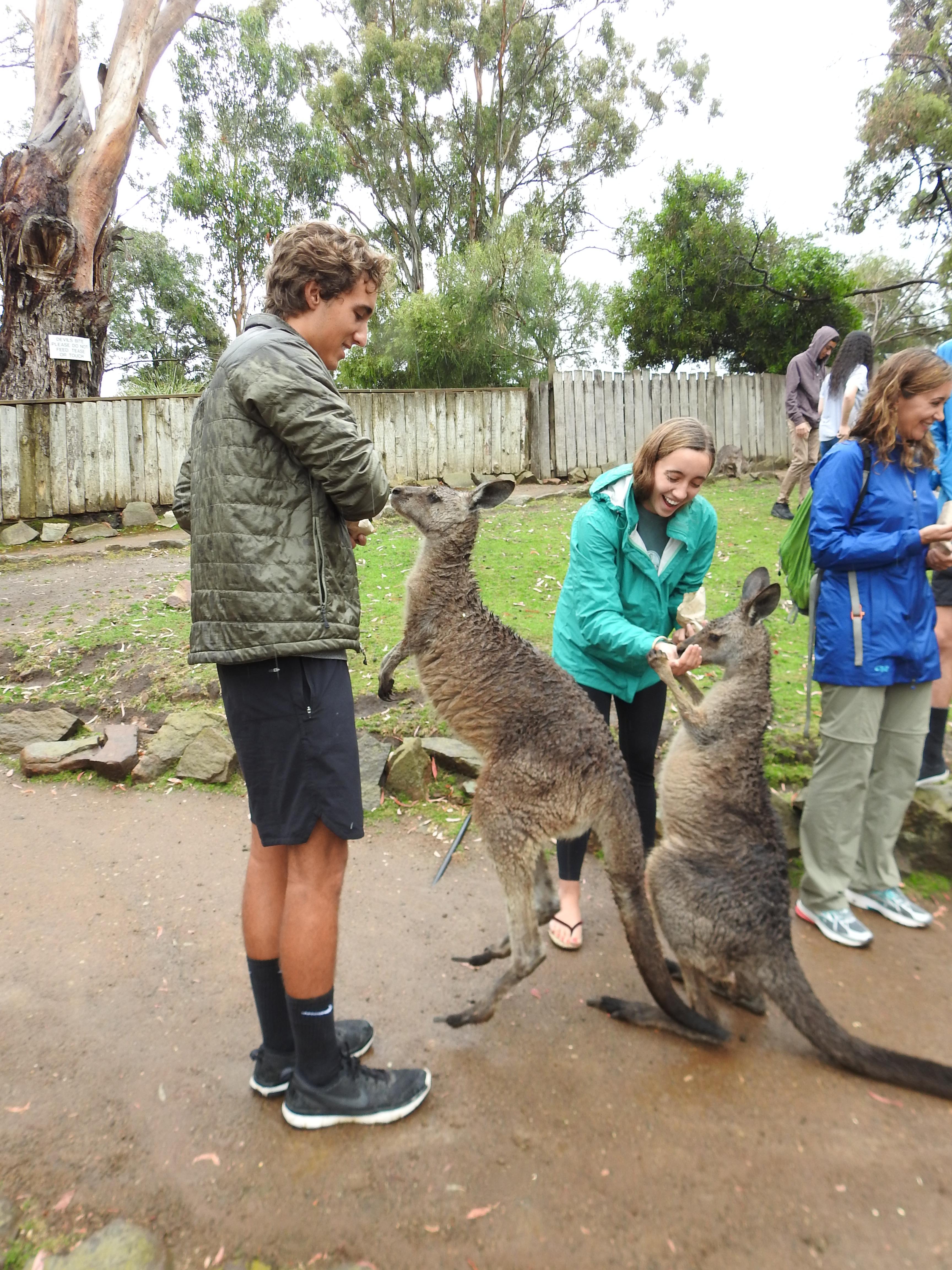 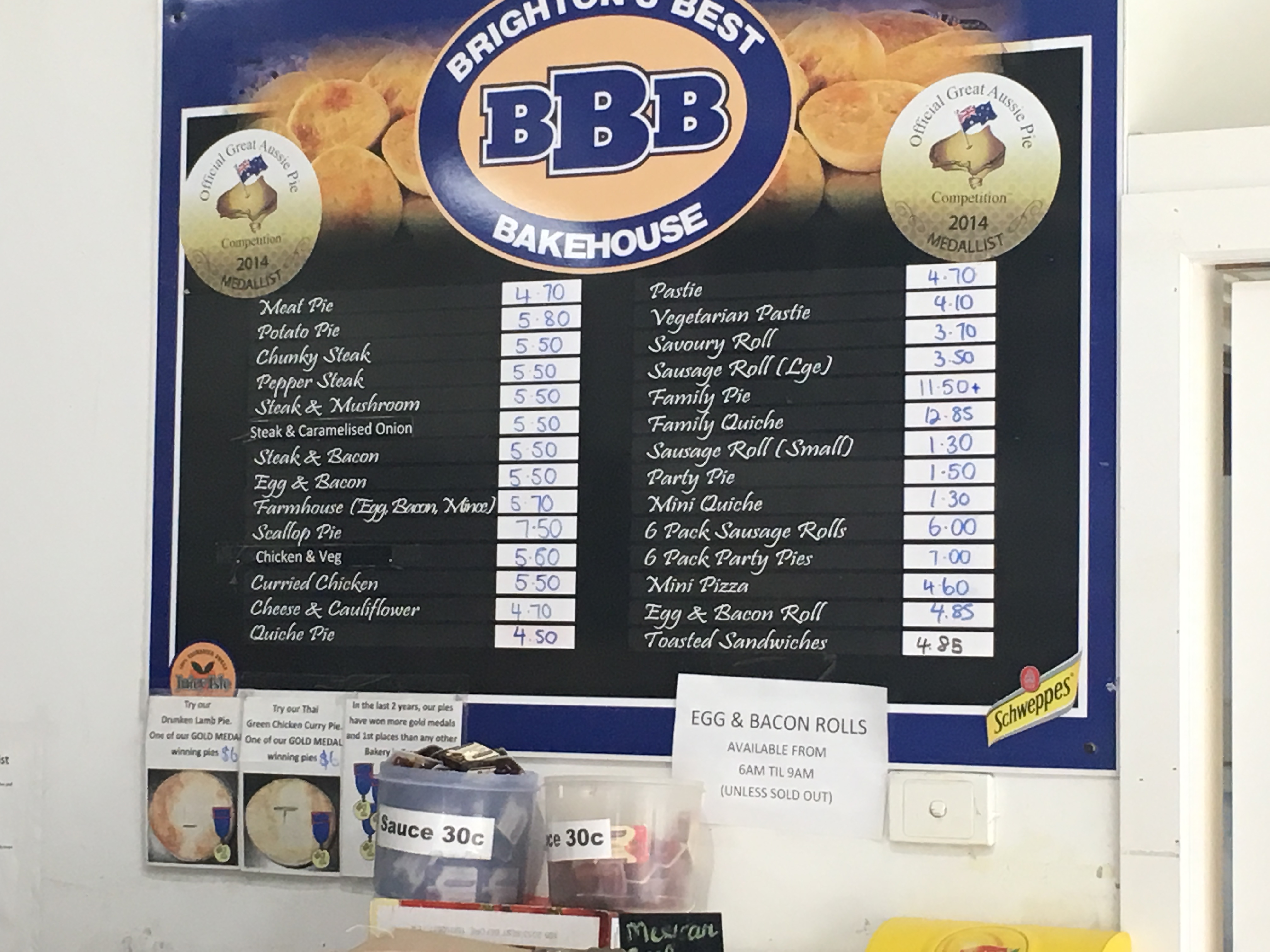 [Note: while our nation has won world wars, discovered flight, and put a man on the moon, we have failed in the department of savory pies. With the exception of chicken pot pie, we are not competitive in this critical baking arena. One bite of the award-winning “drunken lamb pie” or “green chicken curry pie” makes even the most ardent American realize that we are losing the Pie Race.]

We returned to Hobart to find that the rain was thinning and we could walk about for a while.

But I can assure you that no one in Strathgordon or Gordon Dam is enjoying any day-long hikes today.

PS We love Aussies. When a man walked out and saw this: 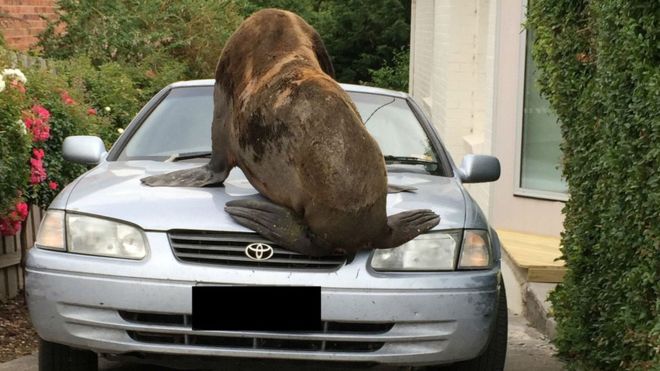 His response was simple, “We got up and there was this great big seal on our car which is definitely not what you’d expect on Boxing Day.” I guess he was just expecting shopping, a yacht race and test cricket.