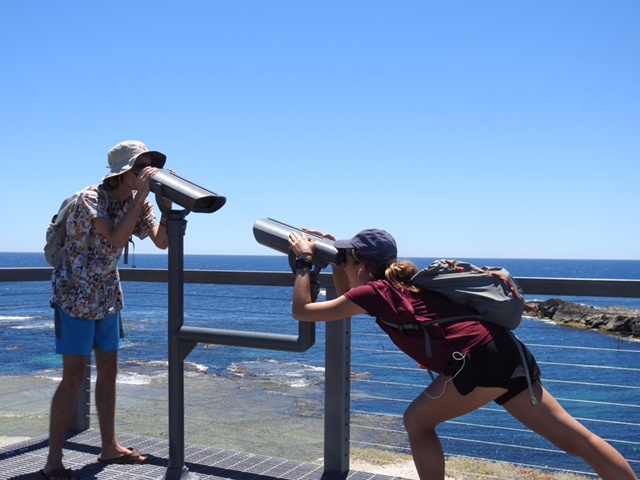 Note: the opening photo has nothing to do with this blog.  It simply amused me.

With our busy travel schedule, I failed to share our last great one experience around Perth, Rottnest Island.

Before I go any further, I feel a need to commiserate with the local Rottnest Chamber of Commerce.   Clearly, they do not have a name that beckons the reluctant traveller. Who wants to take a 2 hour ferry to a rotting nest? But I did a little research and found that the name was not chosen by an English-speaker, but a Dutchman in 1696: Willem de Vlamingh. If you have ever heard Dutch (a notoriously guttural tongue), you know that pronouncing “Vlamingh” would likely clear all the phlegm from your throat. I am guessing that such a name would leave a psychological scar on a person – the type of scar that would make you less generous in your own naming habits. This would help explain his choice for Rottnest: a stunningly beautiful island inhabited by the wonderfully friendly Quakka marsupials – lovely animals that happily flirt with the visitors (and voted “Happiest Animal” by the Huffington Post). 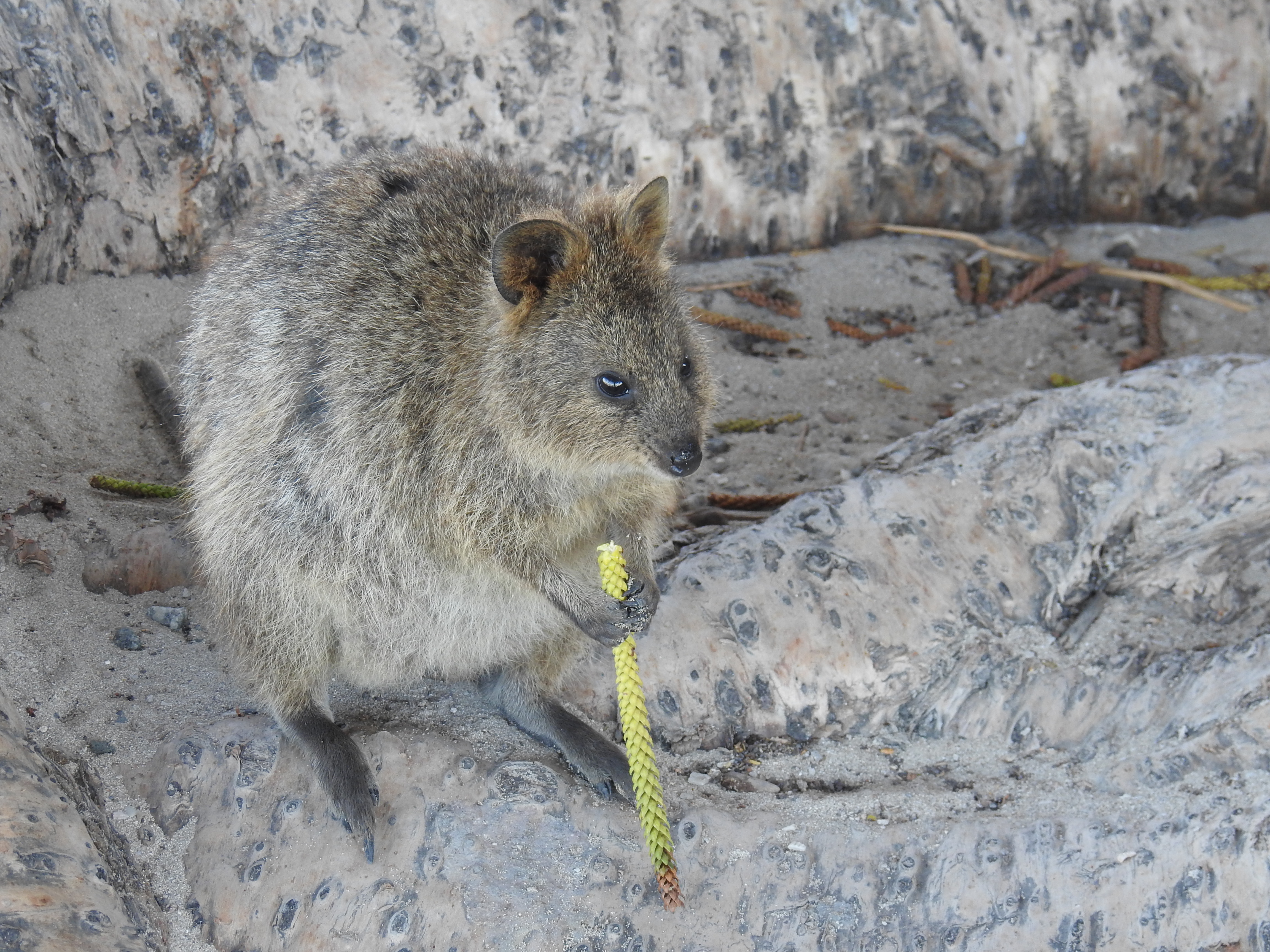 [Note: Those bemoaning the decline of real news can contemplate that fact that a major news outlet is not only reporting stories about “happy animals”, but actually creating them, but this discussion is for another day.]

I do not want to know what he named his children.

Rottnest is about 7 miles long and varies in width from 300 meters to 2.5 miles. I know these distances because we decided to bike the island. When we visit Cape Cod, we like to spend one afternoon biking from Falmouth to Woods Hole and back, a 10 mile round trip. We rent good bikes for a ride that features shade from towering trees and a long, flat bike path.

There are three adjectives in the previous sentence that are salient to our experience: good, shade, flat.

We had none of these words for our Rottnest ride. The bikes were worn with only three gears and rubber bike chains. The road was incredibly uneven, requiring riders to walk their bikes up hill or pedal like a Tour De France rider in the Pyrennes. And there was no shade. 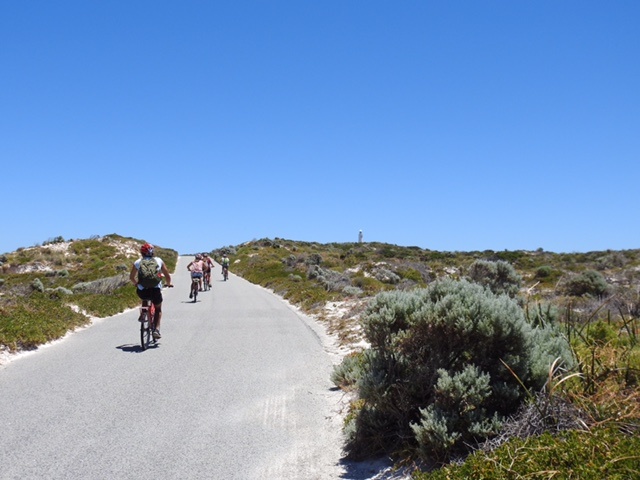 There were trees, but they were all blown to an extreme angle by the massive winter winds that come across the Indian Sea. We saw similar trees in New Zealand where they call the wind “The Barber” because it cuts the trees down (or forces them to adapt). 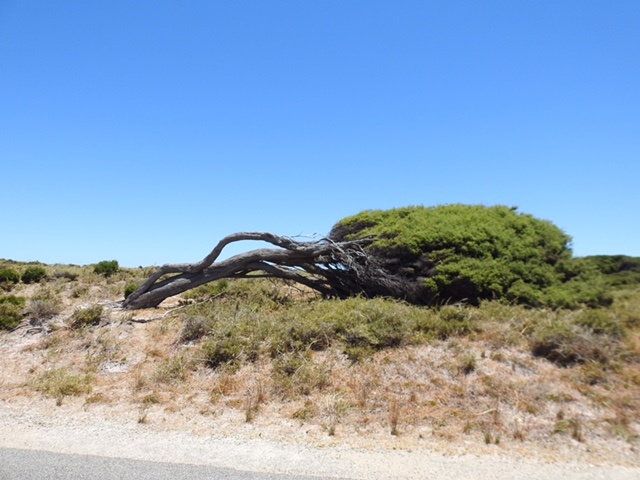 We did not encounter the Barber, but we did encounter some winds. Actually, we wished we had a tad more wind (though it made biking hard) because of one additional factor: the black flies. If the Qhakka is the “Happiest Animal”, these flies are the “Friendliest Insects”: joyfully greeting every visitors’ face, eyes, ears and nostrils. Half of us ended up with a fly in a mouth. [Note: one of my favorite Spanish phrases is “en boca cerrada no entran moscas”, or “a closed mouth gathers no flies”. The phrase is the equivalent to “it is better to remain silent and have others suspect you a fool than open your mouth and remove all doubt”. But on this day, this Spanish idiom was literally good advice.]

As you can see, some other tourists were better prepared for the flies than we were.  Check out the net on this little girls’ face. 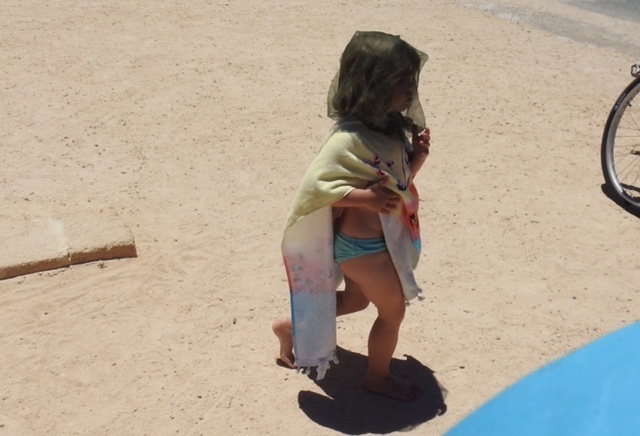 During our trip to the island, we embraced many intriguing sites.

By the end of the day, we rode over 16 miles across hilly terrain with poor bikes. We were quite tired when we returned to the ferry, but very happy with our adventure.  The return trip included some sporting events: a local regatta 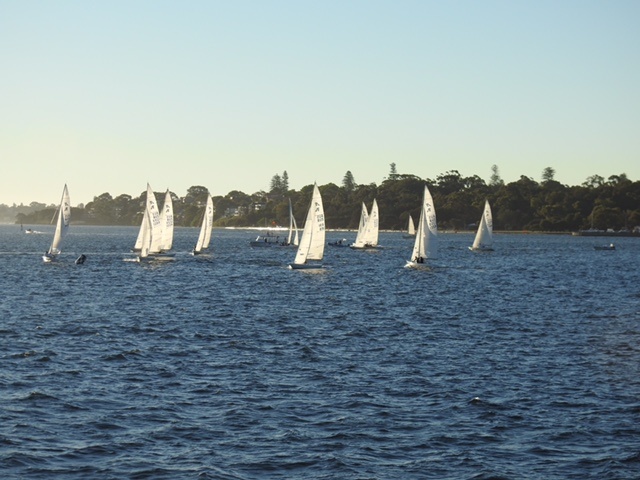 and a arm-wrestling “Battle of the Twins” (I show only the aftermath - the contest itself may be too intense for sesitive viewers). 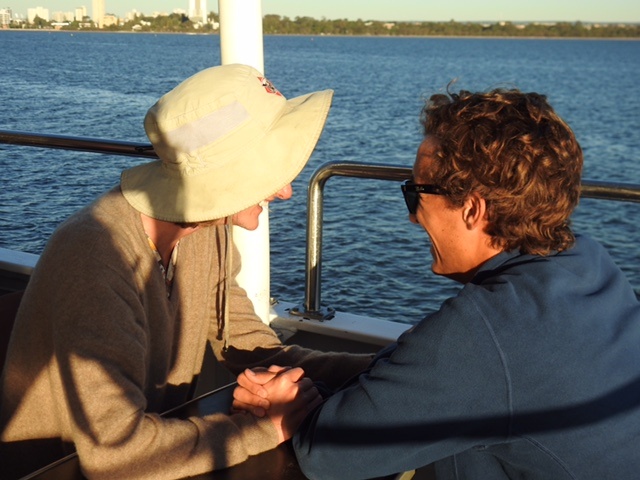 We also got an additional cool view of Elizabeth Quay. 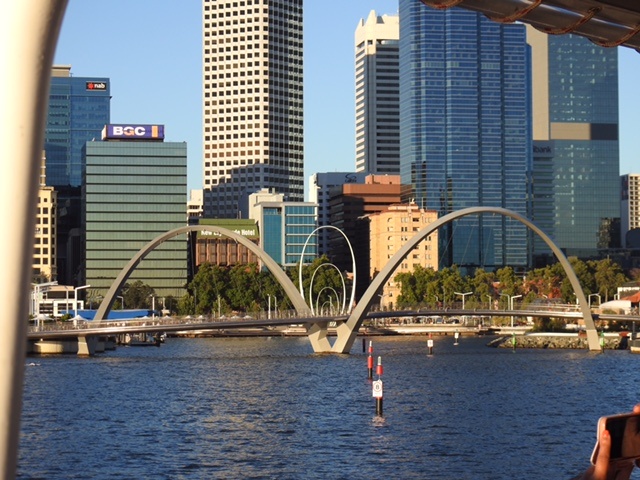 We ended the day with Korean BarBQ with Tanya, another friend of Hunter Follett (a UT graduate who has become a good friend). Tanya came with her mother Roxanna and made our meal exceptional. She is a talented chef, so we let her order and lead the cooking effort (Korean BarBQ, like Chinese hot pot, requires cooking at the table). 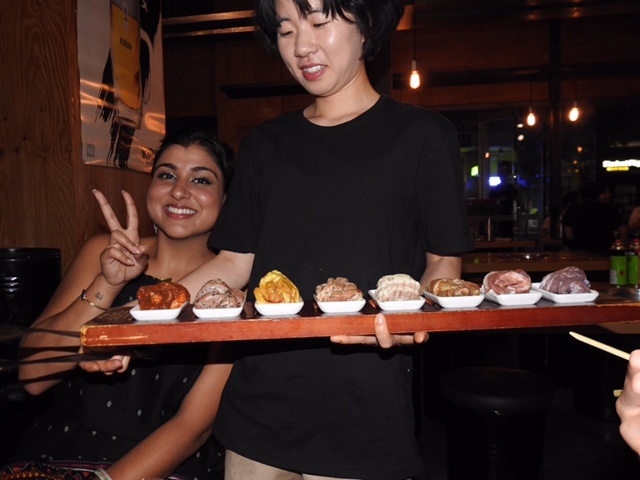 We stuffed ourselves and returned home tired, but happy.

A Final Note on Perth

We enjoyed our last day in Perth and we were sad to leave. This city has the amenities of a serious city, but no pretentions at all. It has fun architecture and civic pride. It reminds me of a Midland, Texas that happens to be on the ocean. Only after both Susie and I had the same thought. We soon realized that Perth was more like Midland than we had first guessed. It is the headquarters for the mining and coal industry of Western Australia, just as Midland is a center of oil and gas.

During the oil boom, services and homes became incredibly expensive in Midland. Perth experienced the exact same phenomenon about a decade ago. In the case of Western Australia, the bounty of their mines became critical to China’s massive economic expansion. As a result, Perth became a rare combination – remote, yet expensive.

But despite the surprising expense, we have found no shortage of charm or interesting distractions. For every pricy meal, we experience a work of public art or a beautiful garden.

I am not sure I see a reason to ever return, but we are glad Perth was part of our grand tour.