A Fun Reunion in an Odd Place 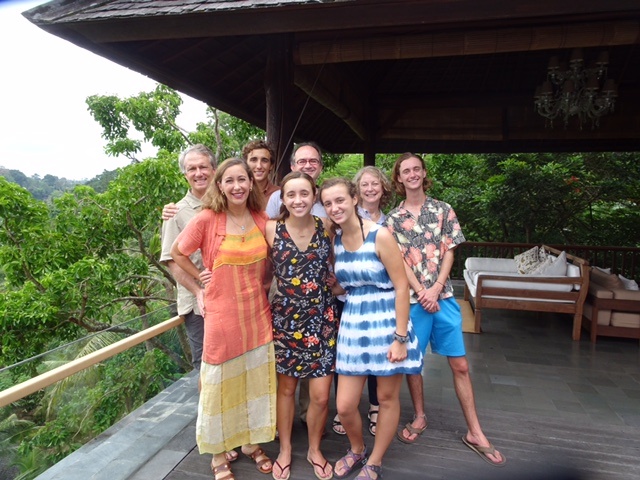 We had a delightful reunion in Ubud on Thursday. We spent time with Mathew Welch and his brilliant wife Patricia. Mathew was a classmate of mine at Harvard Business School, but we have not seen each other since we graduated in 1993.

That is a long time.

Here is something to help put that in perspective. That year saw hit songs from Duran Duran, Tina Turner and Billy Joel.

Mathew grew up in England and studied Chinese (before it was a popular thing to do) at Oxford. He then worked in Hong Kong before coming to Harvard in 1991.

I always looked forward to hearing what Mathew’s insights were. For those of you unfamiliar with the teaching style at HBS, we used the “case method” – a method that requires that every student read a detailed case about a real-life business challenge and come to class ready to discuss it. In most classes, participation would constitute 50% of your grade, so everyone came to class ready to share. In this system, the students talk over 85% of the class with the professor guiding and shaping the conversation.

I should also mention that we took every class for our first year in the same room with the same sectionmates all sitting in the same seats. Typically, HBS would have 9 sections of 90 each.   Of the 810 students, you would never meet some, become acquaintances with others. But everyone knew his or her sectionmates like they were family.

Since we were effectively learning from each other, the quality of your sectionmates really impacts your experience. We were blessed with a particularly talented group. We had people who had played tennis at the US Open, created an elite commando unit in Singapore, commanded a nuclear submarine and started a cellular phone company in Africa. We had residents from over a dozen countries.

Mathew was one of about 10 people that I would always enjoy listening to. Of course, it helped that he had a spectacular English accent, but that was only a small part of the pleasure. He was always deeply thoughtful and occasionally brutally honest. If you shared an ill-conceived opinion, you better hope that Mathew was not the next person to speak. Let me be clear, he was never mean, but he would exposure any weakness in your logic.

As a result, I thought that he was a bit of a double gift as a sectionmate. Not only did he provide good insights, but his presence helped assure that all of us were a little sharper in our thought process.

After we graduated, he went back to Hong Kong (and then to Singapore where they currently live) and I went to Marble Falls.

While that sounds like two completely different directions, they have some similarities. We both love what we do, but we are off the path of HBS friends. If you live in San Francisco, New York or even London, any HBS graduate will have a handful of friends living there as well.

No one from our section (other than us) live sin Singapore or Marble Falls. So it was a special treat to get together.

You might have noticed that I said that he and Patricia live in Singapore, so why did we meet in Bali?

Mathew saw my blog when I was in Japan and commented on it. I told him we would be coming to Singapore and hoped we could get together. Unfortunately, he needed to be in Mongolia (-40 degrees Fahrenheit AND Celsius – this is the number where the two scales have the same number) while we were in Singapore (90 degrees Fahrenheit).

He then said that he would be returning only to go on a cruise with his wife (she is a guest lecturer on cruises, so the passengers get the benefit of her insight and they get a fun cruise – a good deal all around).

The cruise would be going to Bali.

So I suggested that we meet in Bali.

Mathew joked that I should tell everyone that he dropped everything to meet us in Bali – after all, what is 1000 miles between friends? While that is not true, they did spend 3+ hours in a cab to get to and from the cruise ship. 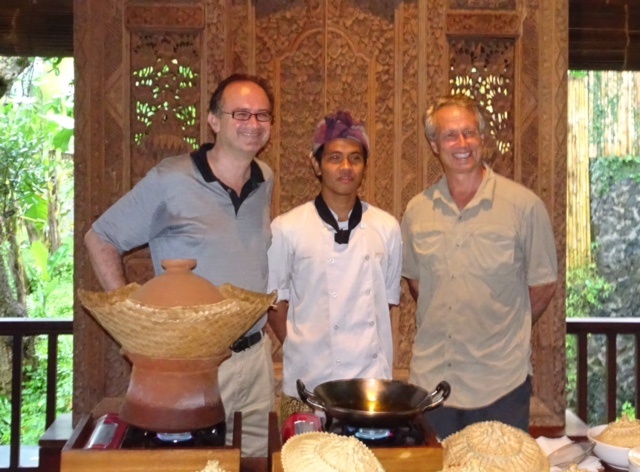 Our lunch lasted 3 hours. It was particularly fun for three reasons. First, I had never met Patricia before. She is funny and insightful. A true delight. Second, Mathew provided a regular supply of intriguing thoughts. I enjoyed learning about his new ventures and his adventures around Asia. Finally, I loved seeing our kids conversing with both of them. Susie and I had not even met when I first met Mathew. None of our kids would be born until 3.5 years after graduation. Yet here were “our babies” holding their own in conversations about world events with two of the brightest people around.