Zen and the Art of City Strolling 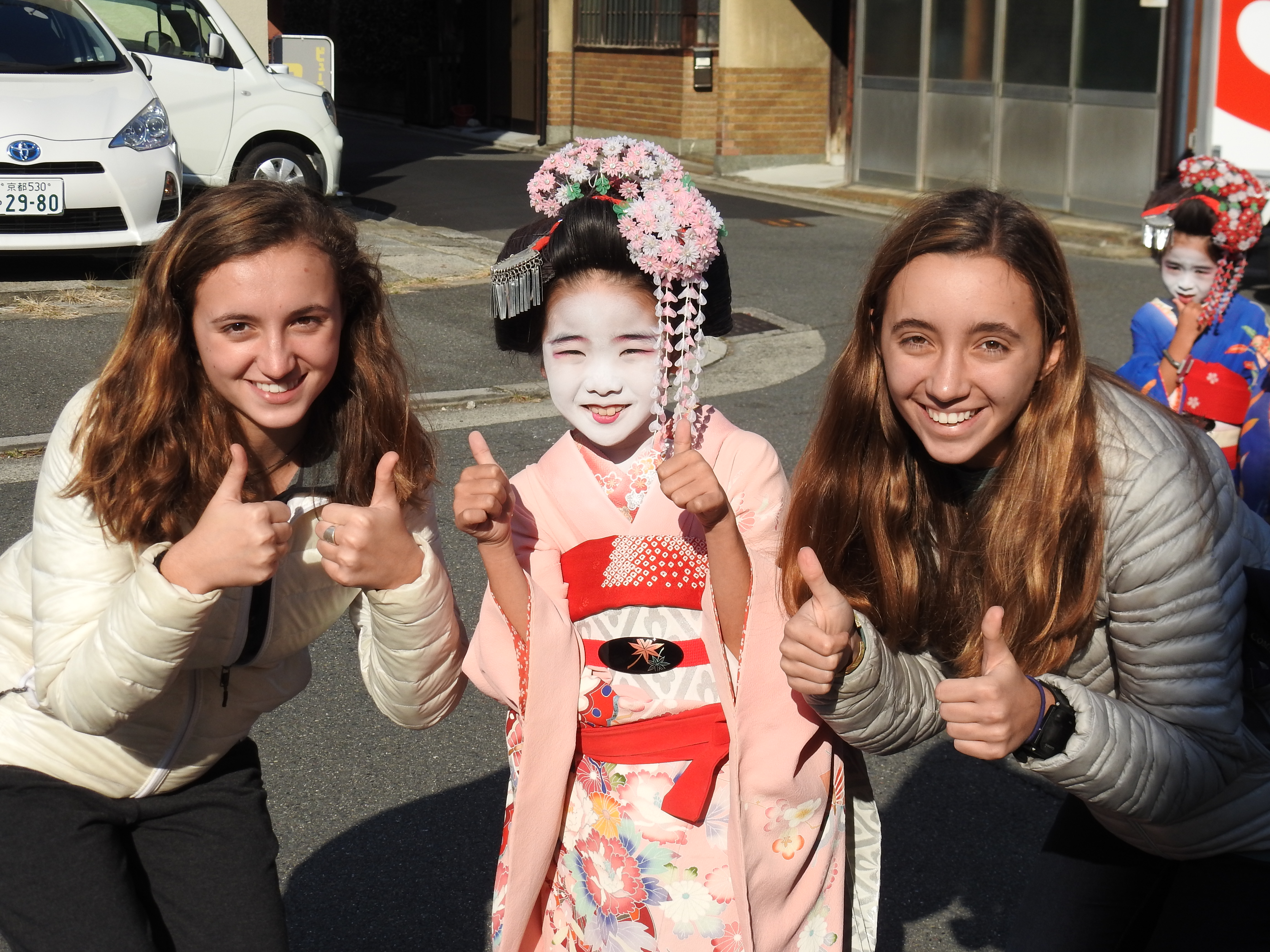 Please allow me to start today’s blog with a disclaimer.

Some days, I get a few hours on a train to write.

Other days, there is a nice common area in our hostel with wifi and a pleasant ambiance.

On the bad days, I have neither and find myself blogging at 11PM in a dark room with Susie Ma’am sleeping happily near me. I strive not to wake her, so I try to write as quickly (and quietly) as possible. Inevitably, these are also days with weak internet connectivity, making the blog posts harder.   Why do I share all of this with you? Because I need to explain why some blogs will post with a myriad of typos. I want to get the post finished so I can get to bed. I also do not have Susie there to proof the article. Yesterday’s blog was such an example.

You might have wondered if it was the result of too much sake.  That would make a better story, but an untrue one.  Nope, I am just dead-tired at the end of some of our days and I cannot bring myself to proof the blog.  We realized last night that we have been averaging over 9 miles per day in walking with perhaps 1-1.5 of those miles with packs on or over changing elevations.  By the end of the day, a seasoned fellow like myself can become weary.

With that detail covered, I want to share a little more about our time in Kyoto.

Walking on “Cultural Day” was a fun serendipity. I briefly mentioned the Shinto ritual yesterday, but it is worth sharing more about.

We happened onto a Shinto shrine just as they were doing some noon ritual. There were roughly 20 monks (both men and women) with scrolls and flutes who all parade in and sat down. On the side were two older men in elaborate Orange and Green robes with long trains behind them. I will call them the Priests. 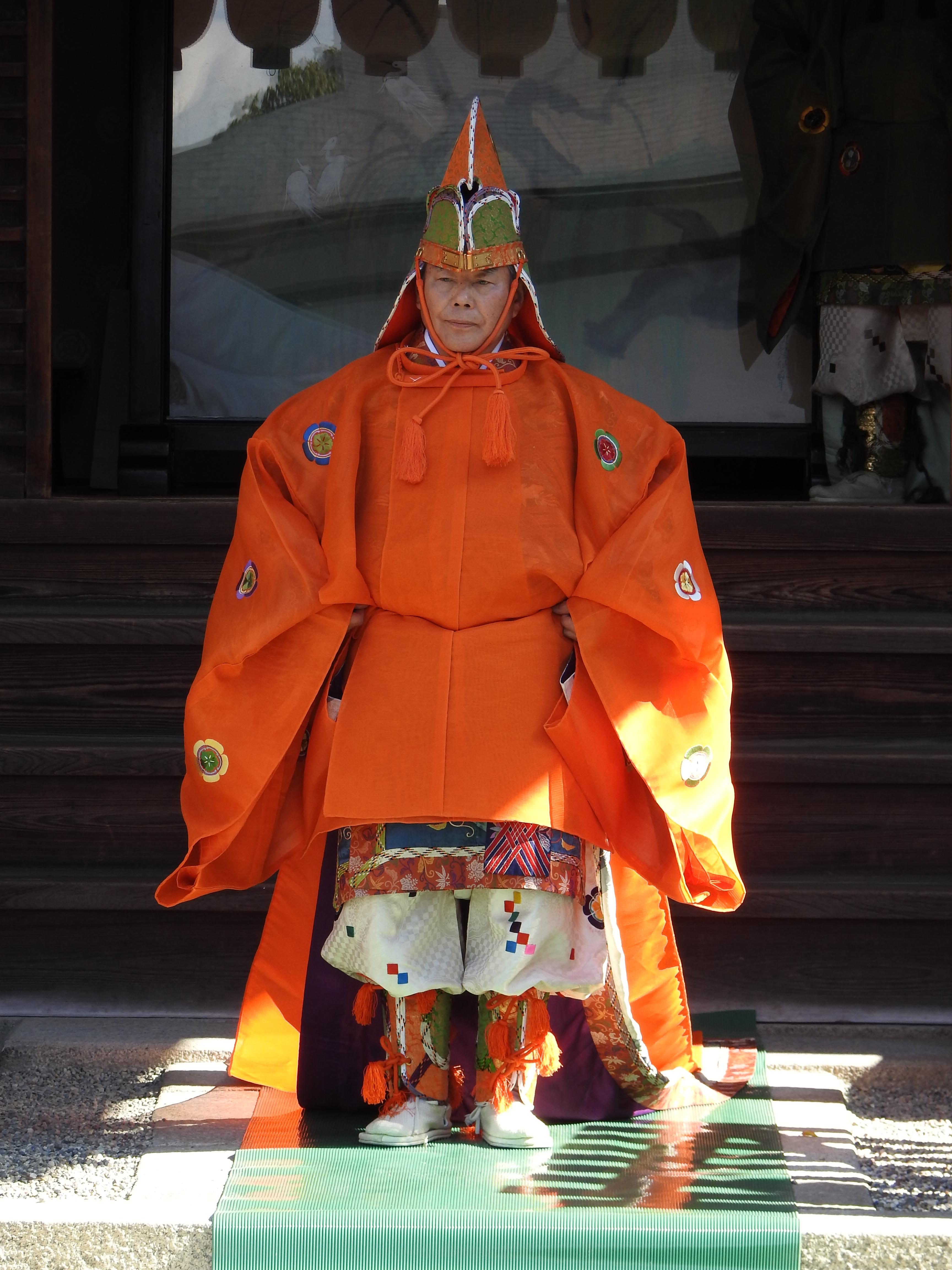 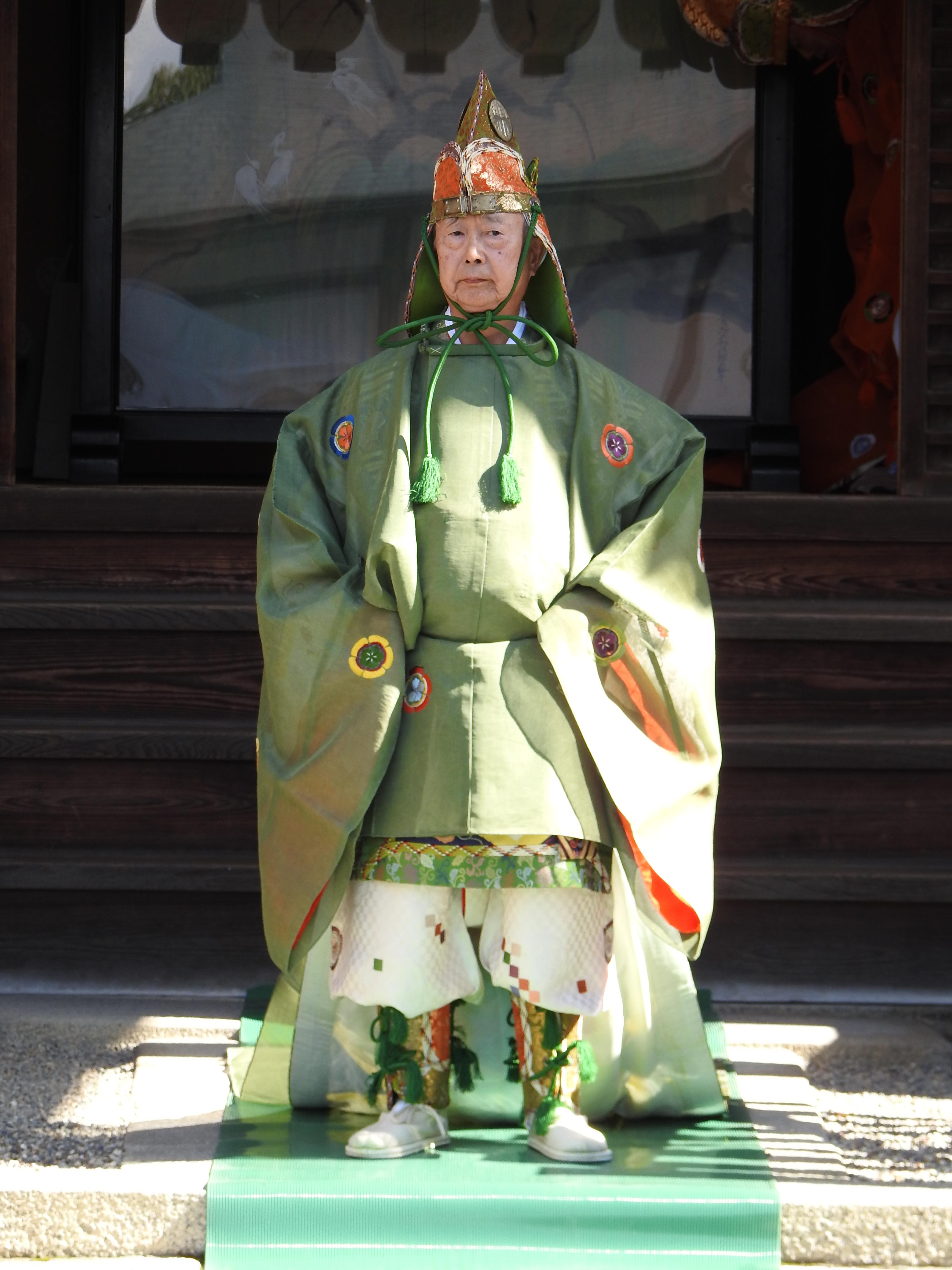 [Note: check out the footwear!].

Attendants laid out long carpets to assure that their trains never touched on the ground. Once all the monks sat, a woman made an announcement in Japanese. While the content was lost on me, the tone was recognizable – formal and ritualized.

That is when the flute tsunami started. 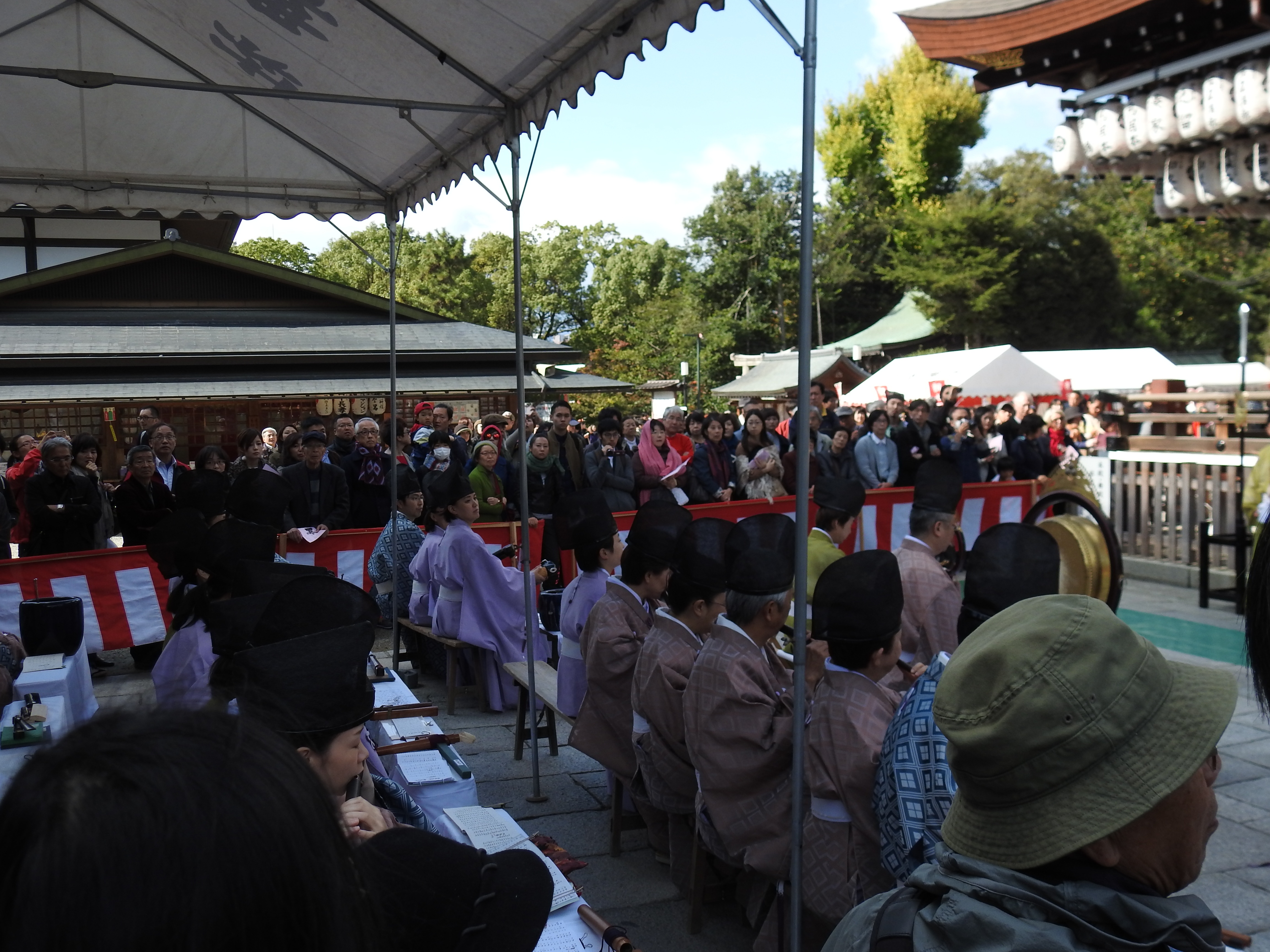 Imagine a Kindergarten class. In this class, an earnest, if ill-advised teacher gives every child a plastic recorder/flute and extolls them to play, “Play what you feel! Express yourself!” Thus encouraged, every one of the 20 children starts to blow into their recorder and wiggle their little fingers. Do you have the mental image?

The monk flute playing was not quite that good.

As the flutes shrilled and a drum beat, one of the Priests walked in, took a ritual spear, walked onto a stage and then, well, did some formal series of motions. I could not tell if he was acting out a fight, simulating some type of agricultural activity or simply acknowledging the spirits. When he was slowly swinging that spear, the flutes were extra loud and impressive.

He retreated and the next Priest came forward and did the exact same thing. He then returned to his starting position so that they could come out together and do the same thing in parallel. 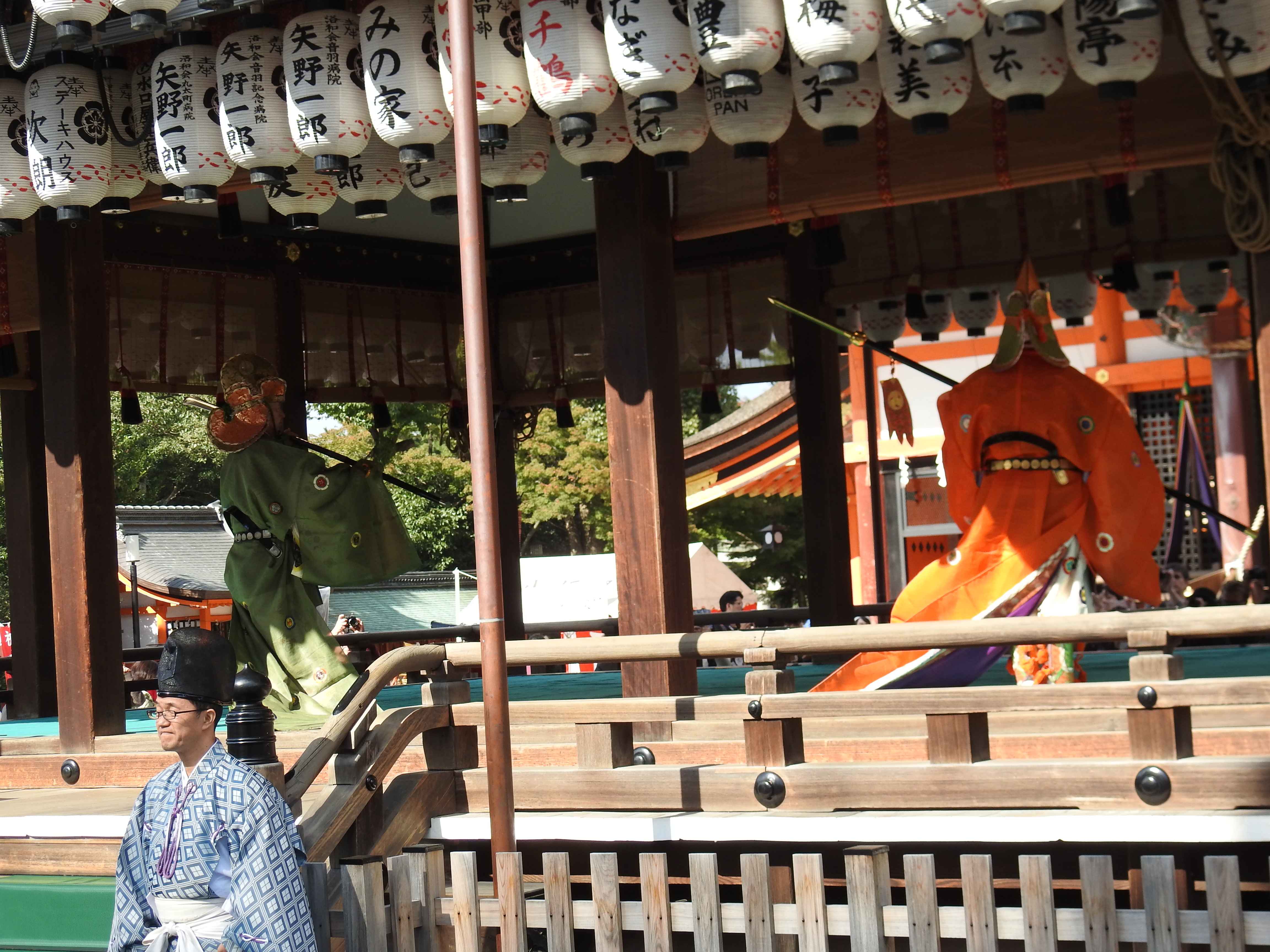 While initially annoying because of the flutes, the effect was soon somewhat hypnotizing. The best rituals take us away from the “normal” world and put us into a new and different mindset. This odd combination of drums, robes, spears and – yes – flutes had that affect on me.

Another aspect of Cultural Day is the fact that tons of locals were walking around town decked out in kimonos and celebrating their heritage. Picture Octoberfest in Munich, except replace lederhosen with kimonos and drunkenness with polite bowing. 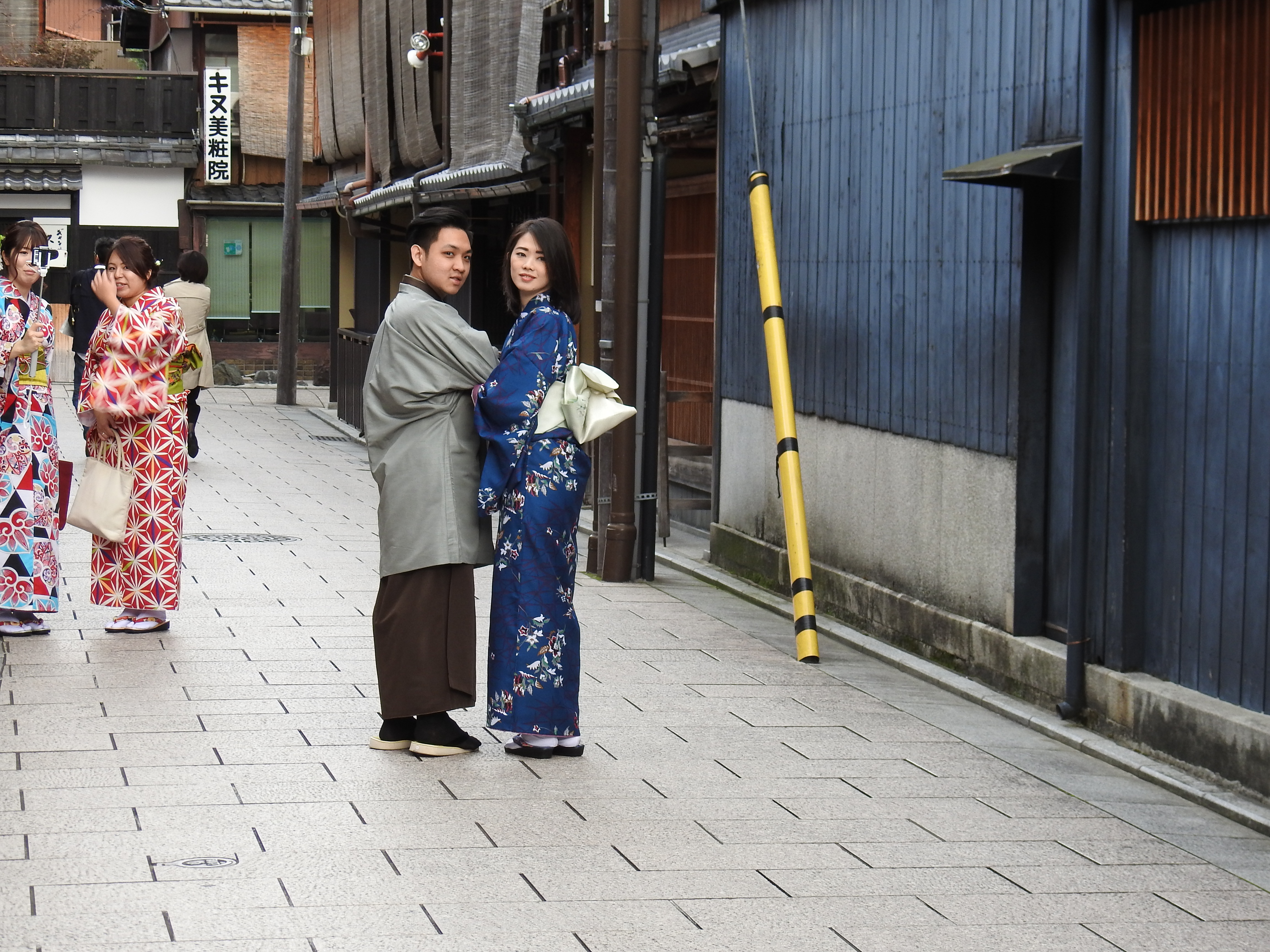 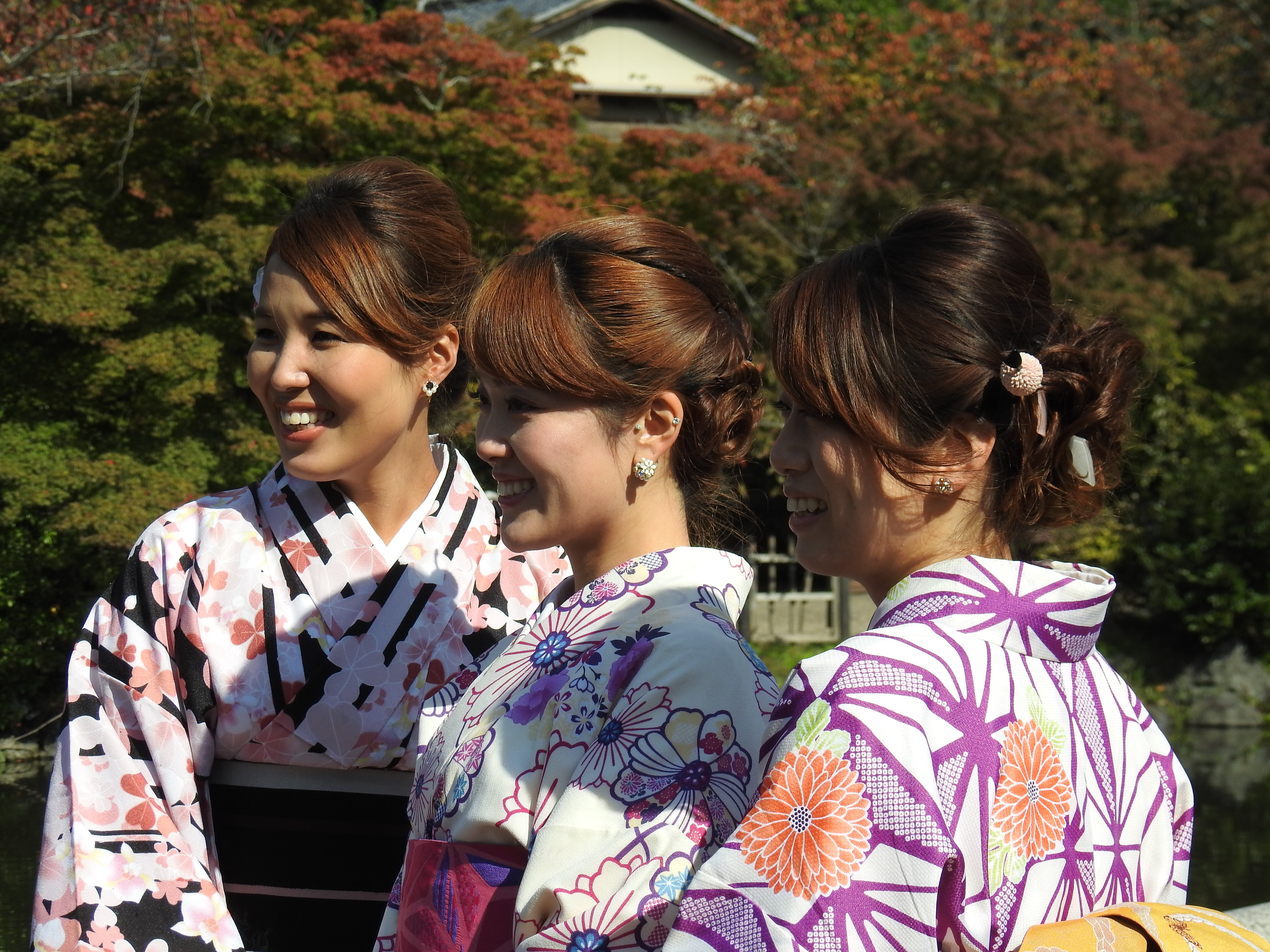 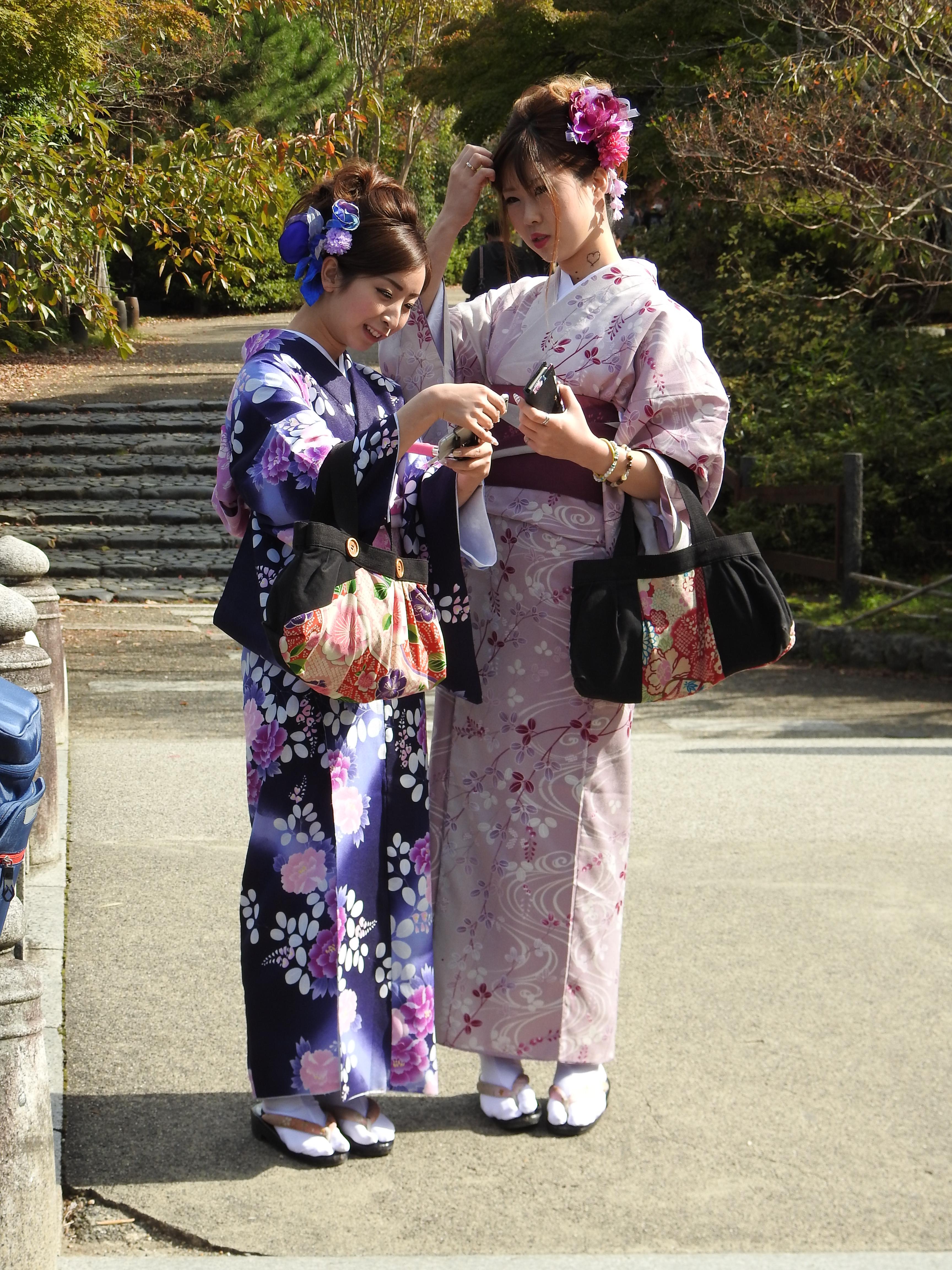 We also saw a pair of girls dressed as geishas walking through the part of Kyoto that still has some geishas. These little girls were certainly not training to be geishas. Since their parents looked thoroughly modern and invited our interaction, I think their geisha look was like girls dressing up as princess at Disneyworld for them. 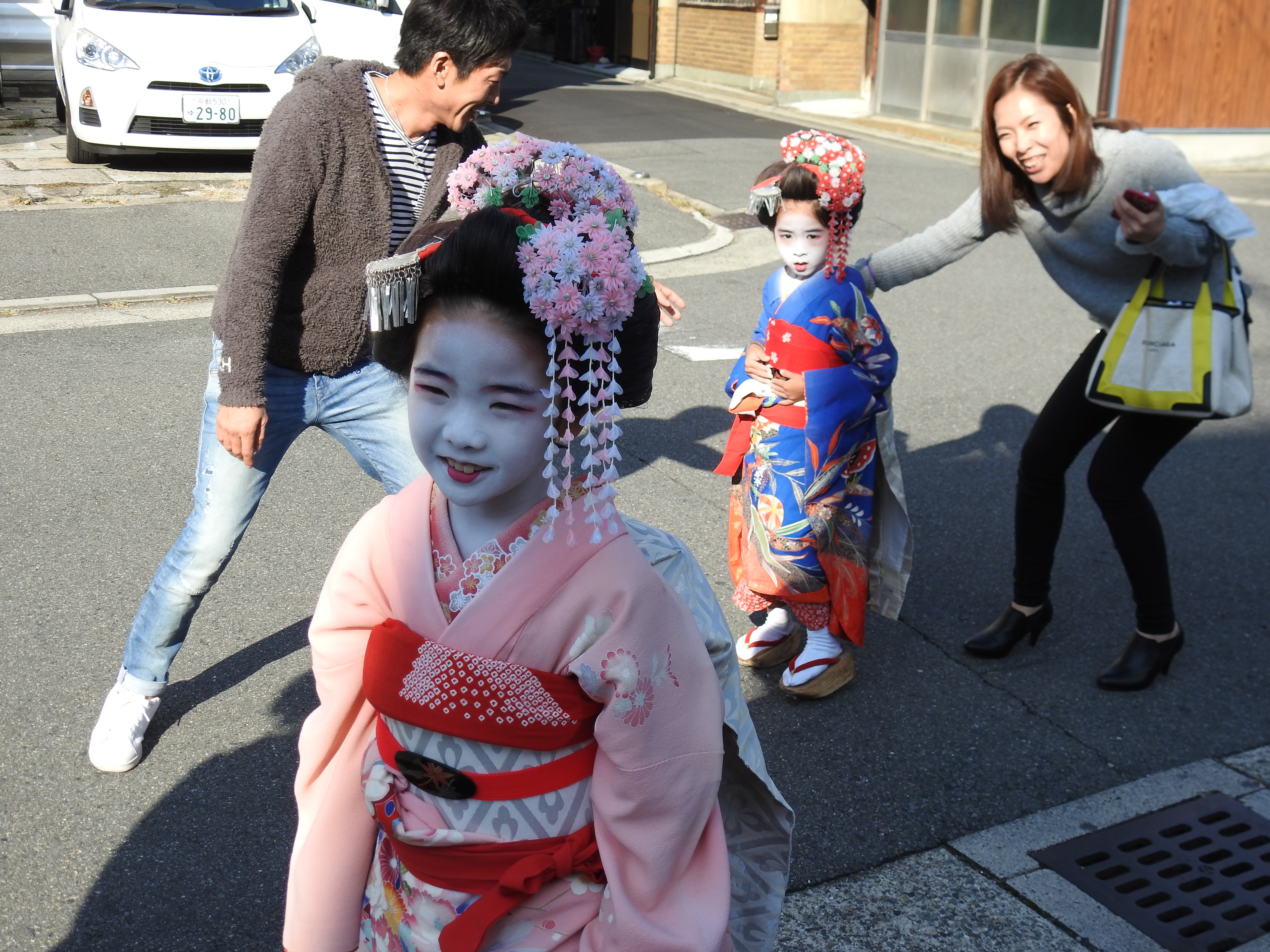 Finally, we came across a Zen Buddhist temple that appealed to Wiley just as the Grand Buddha Temple and its 50-foot bronze Buddha statue impressed Liam. Wiley likes art and quirkiness.

We had come to the right place.

Zen attempts to help the believer achieve enlightenment through disciplined study and relentless pursuit of perfection. They may pour themselves into learning the tea ceremony or archery or gardening or calligraphy. The rock gardens are an attempt to create sublime beauty. The paintings are meant to be like visual poems that evoke feelings as much as a true sense of place.

But Zen art can also be oddly cartoonlike and playful. Here is a famous painting by Sotatsu (circa 17th century) of the wind and thunder gods. 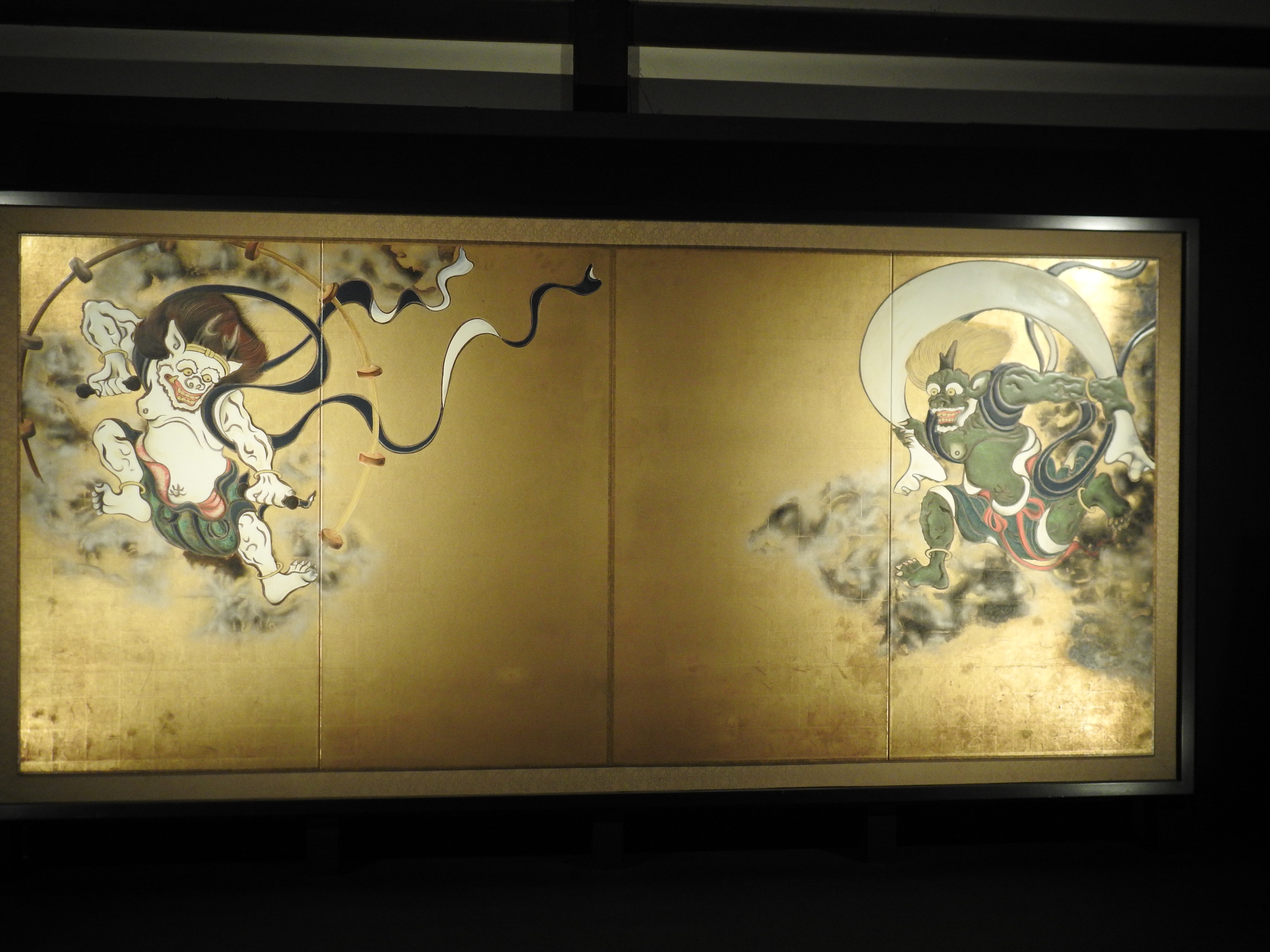 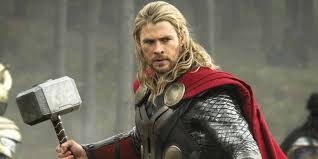 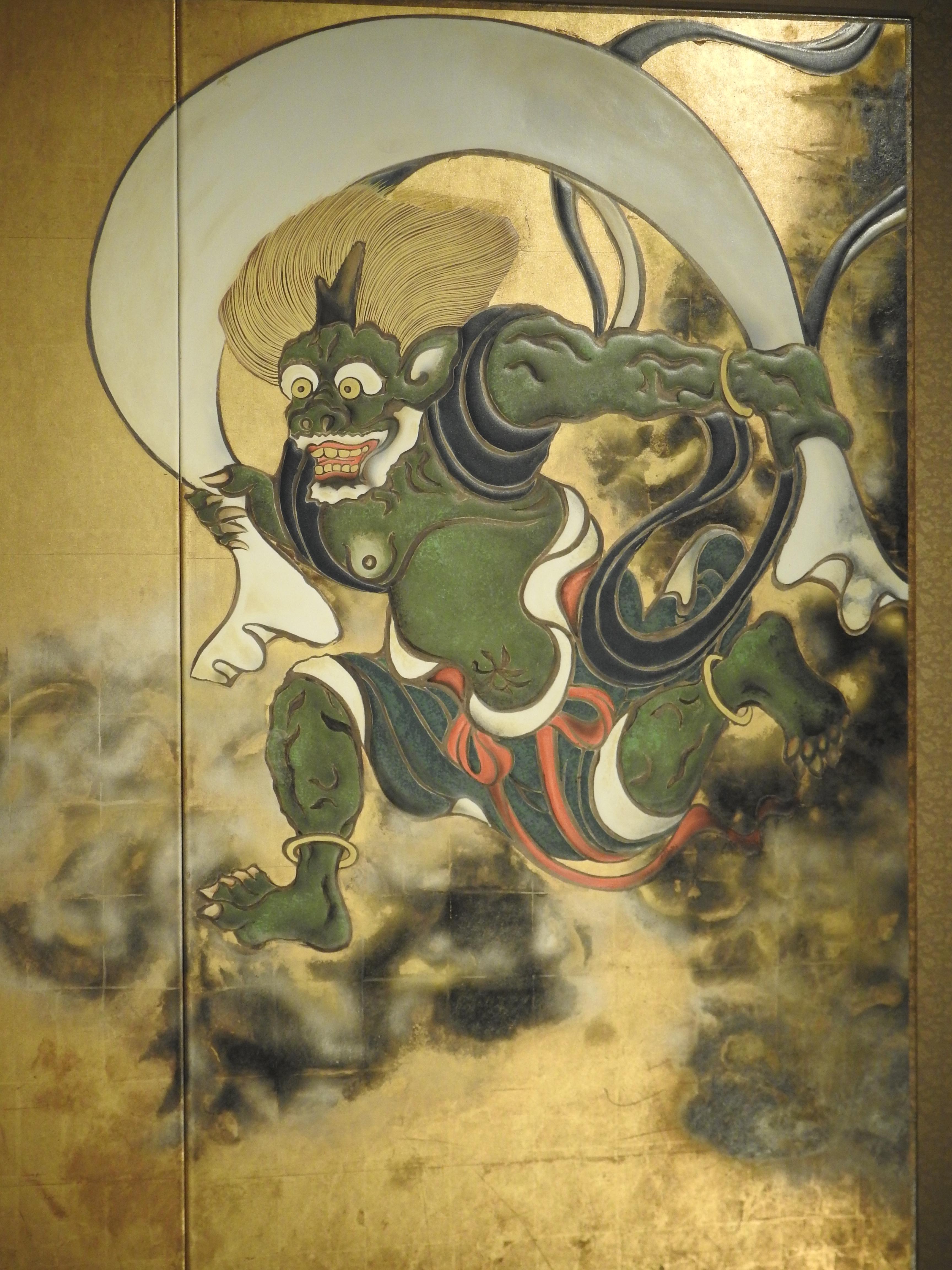 Another artist did these dragons just 14 years ago. 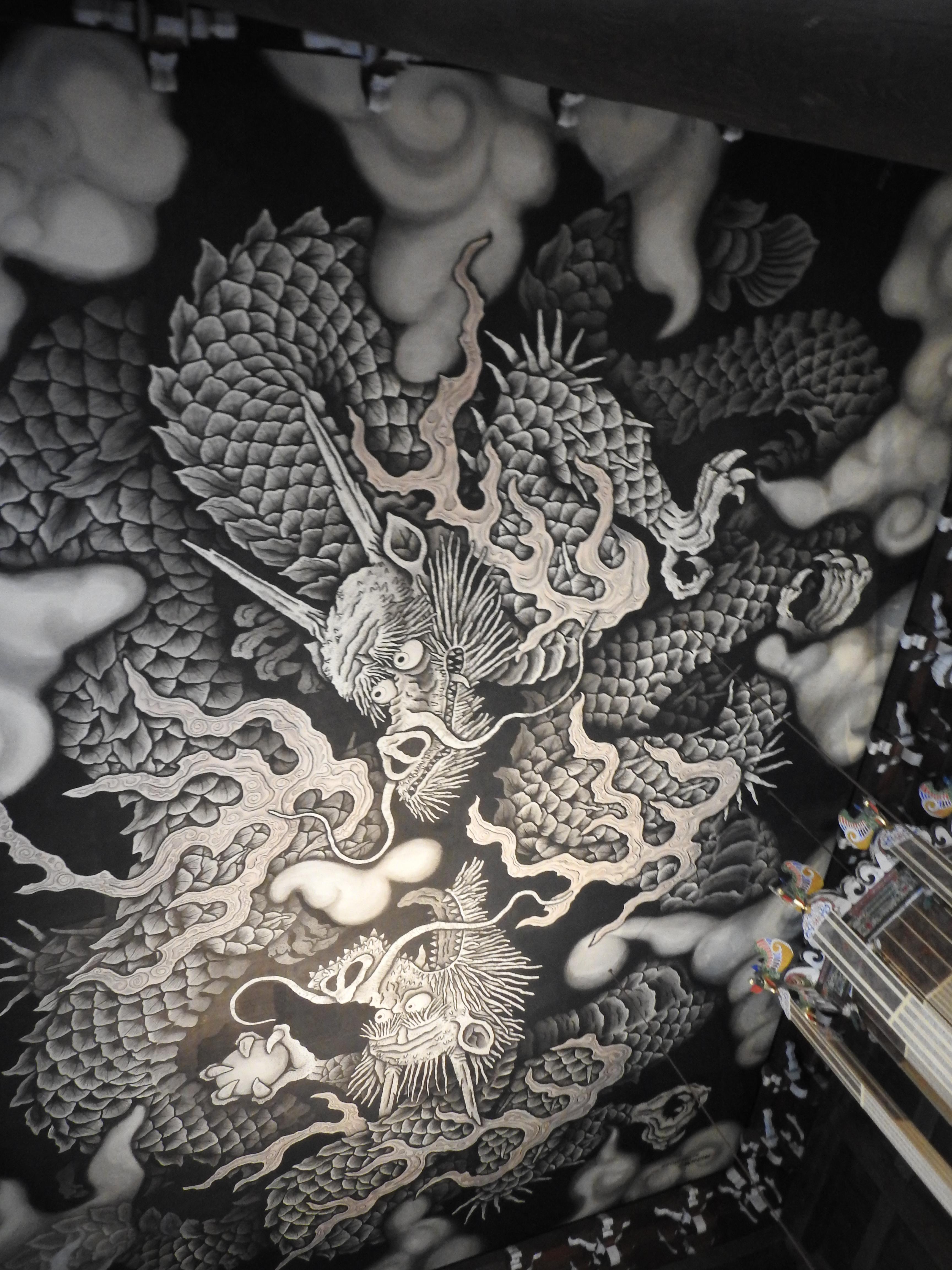 The artist spent two years painting it on thick traditional Japanese paper laid out on an elementary school gymnasium floor. This is clearly a better technique than Michelangelo used for the Sistine Chapel (easier on the back). The works commemorates the 800th anniversary of temple’s founding.

We also appreciated another rock garden, 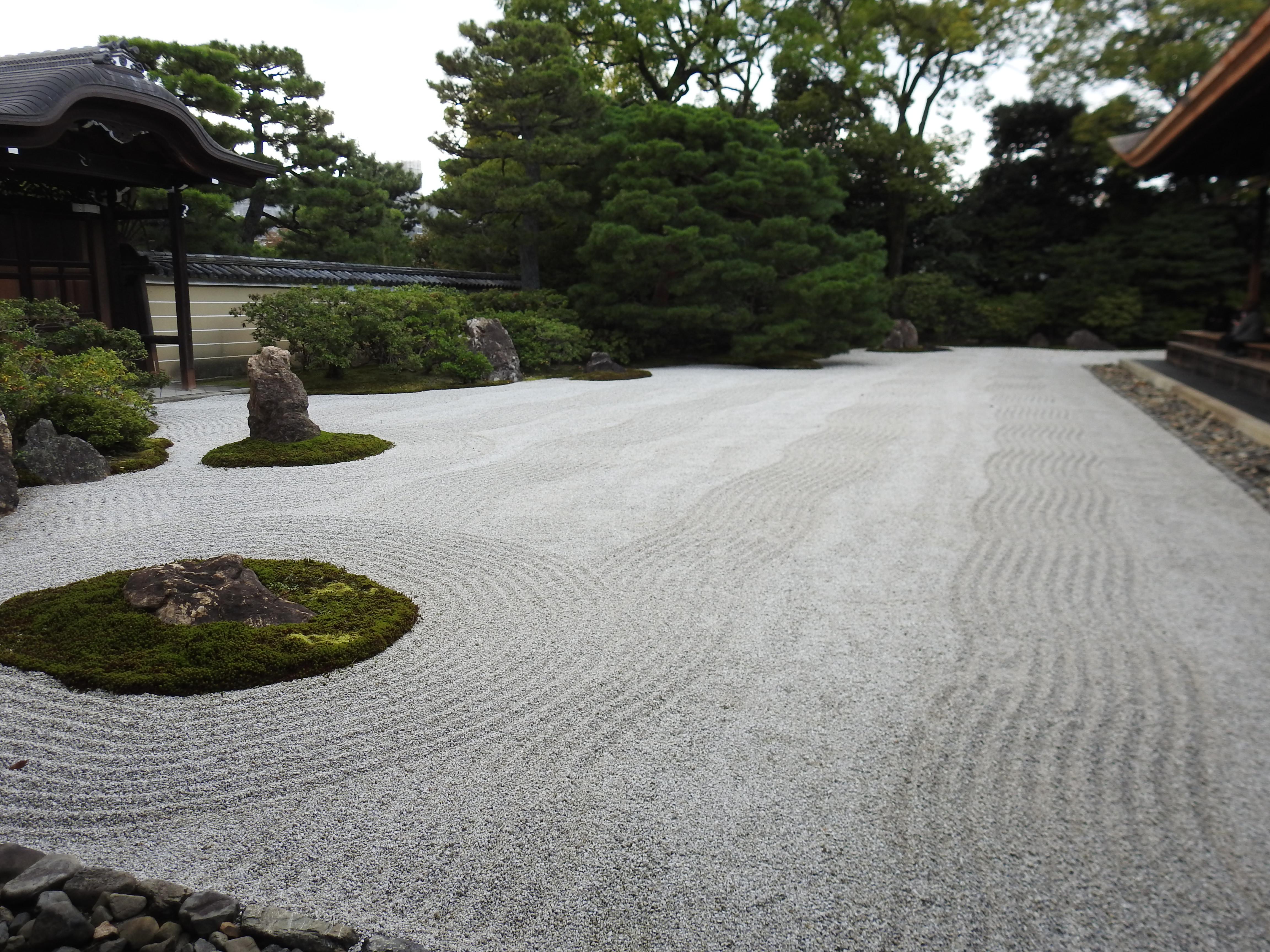 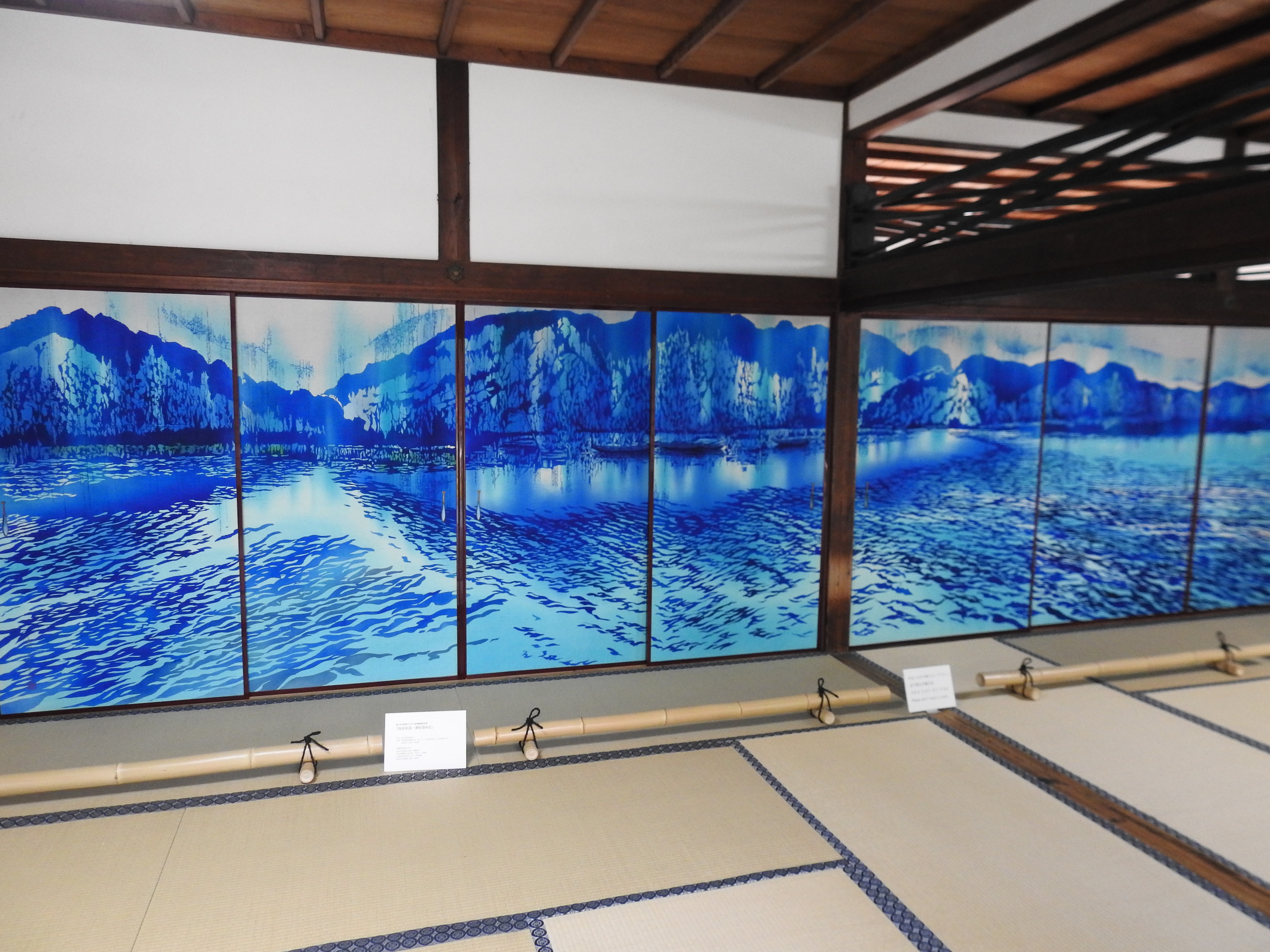 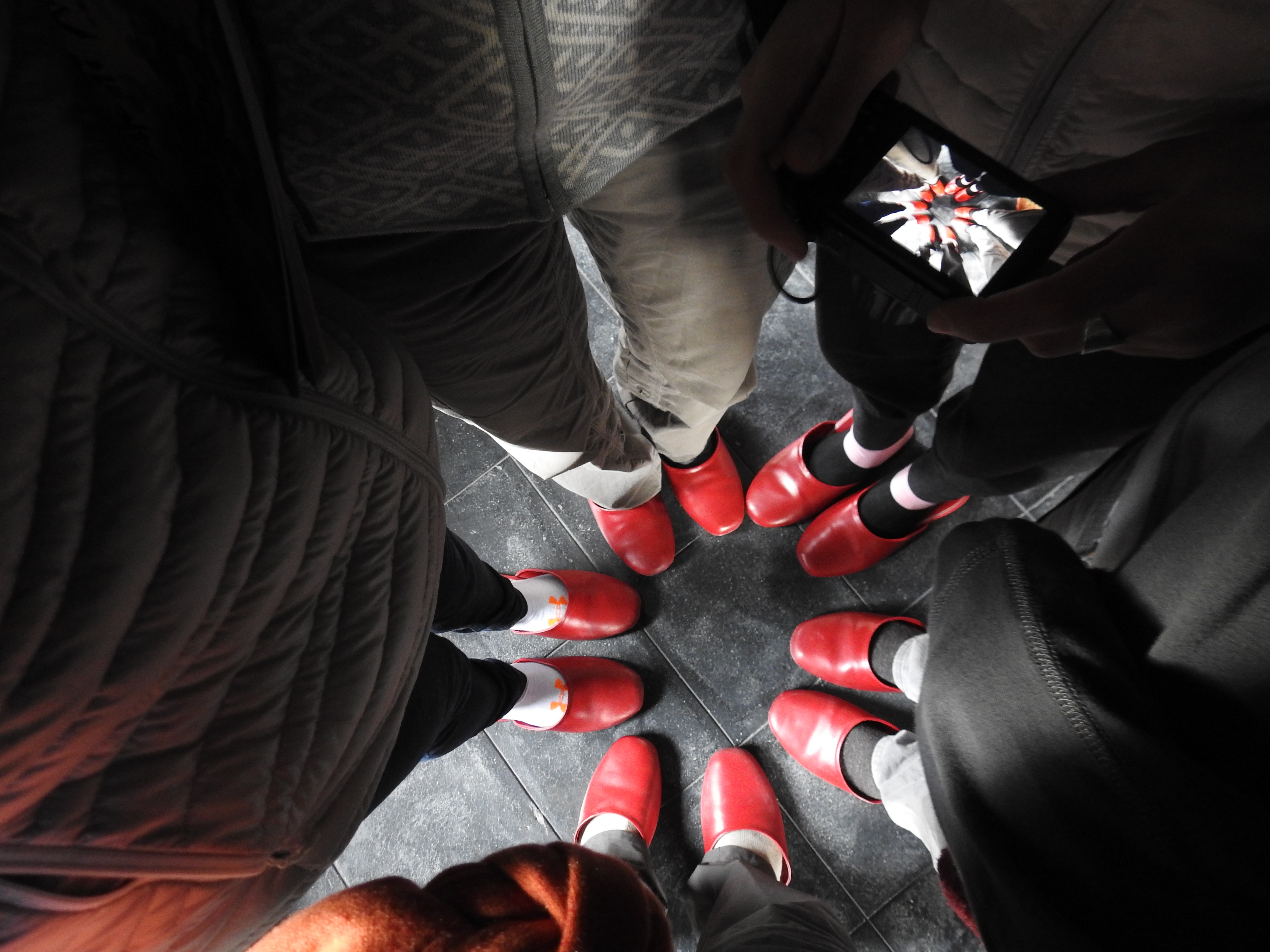 that would fly off when stepping over the not-to-be-stepped-on door thresholds. 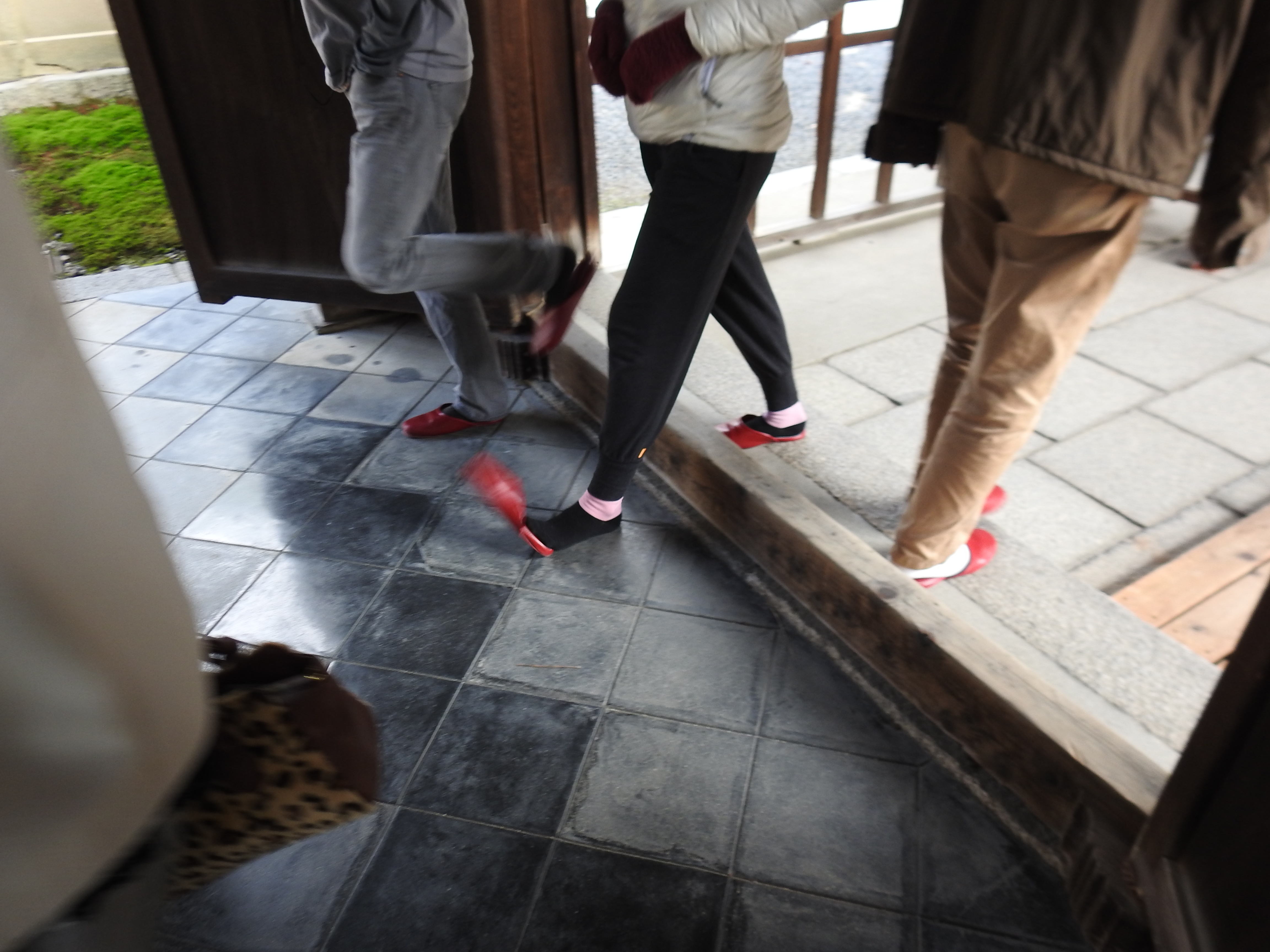 It was odd and quirky, thus a natural fit for Wiley.

Virginia was in a different room across a garden when I took this shot. She is more serene in this photo than any of us have been in weeks. 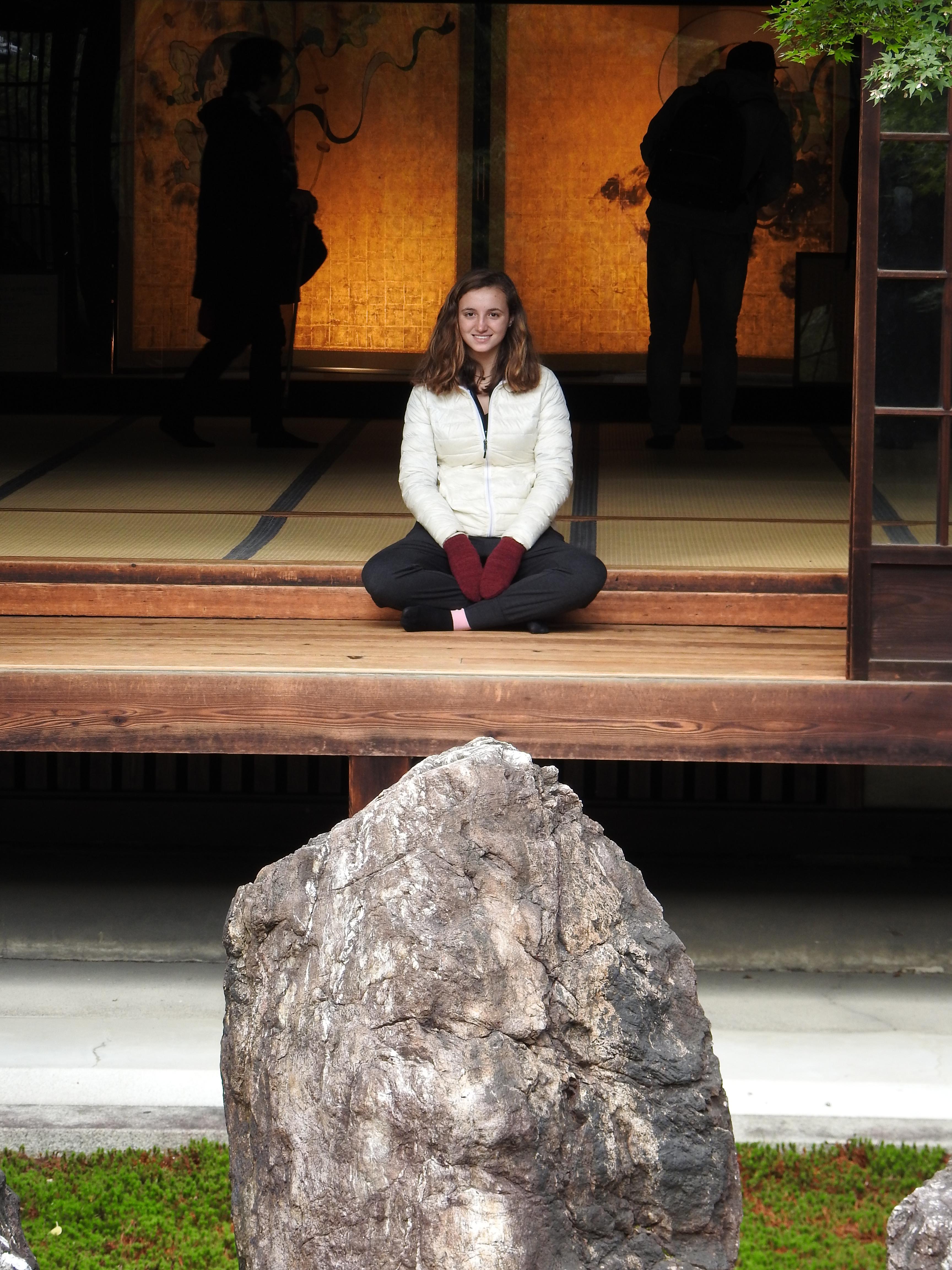 We treasure the fact that we came across so many fun sights (the ritual, the geisha, the temple) completely without intentionality. We simply picked a general direction that had several temples or shrines and walked there. These were not the highest-rated or most famous sites, but in Kyoto, that did not seem to matter. We were enjoying unexpected discoveries and not competing with throngs of people to see them.

To summarize, we loved Kyoto in general and felt like we hit the lottery seeing it on Cultural Day.