We Love Kyoto, But Struggle with Trip Advisor 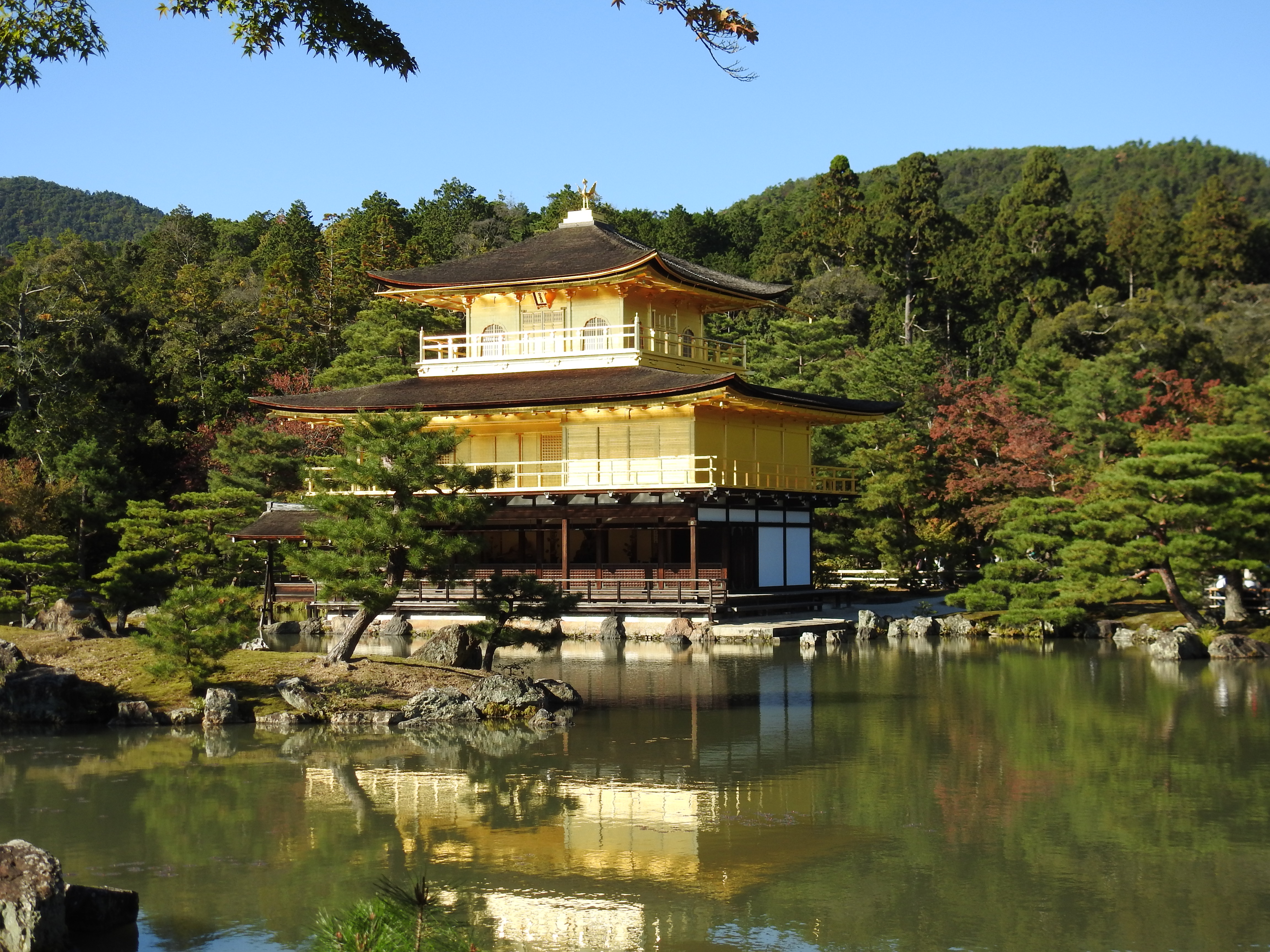 Many people live and die by using Trip Advisor to assist their travels. We were once among them, but have found several tragic flaws of the Trip Advisor design.

First, it is not unlike high school elections: popularity outweighs substance. For example, I have learned that the top-rated restaurant at every ski resort is the pizza joint with the best prices and the most attractive wait staff. The top-rated restaurant is never the restaurant with best food or best service or even the best value. It is the one that has the most reviewers who leave happy, which tilts heavily toward 20 year old snowboarders who love to post to social media and not 50 year-old camp directors who do not review as often. Face it folks, I am not quite the right demographic for the Yelp review crowd. Think about it. I am posting long blogs to chronicle our adventures while my children are sharing Instagram posts and Snapchat stories. The quick web-enabled reviews favor the young.

When traveling abroad, Trip Advisor is somewhat more reliable – there are fewer 20 year-old snowboarders. The reviewers are more likely to be similar to me than that group, but that still does not guarantee that they see the world like we do.  Many tend to belong to a travel philosophy that encourages getting great pictures at the most picturesque sites, but not really engaging in the food, culture and people of a foreign country. As you know, we like to get lost and point to items on menus that are absolutely baffling to us. We like to be a little more uncomfortable. As a result, reviews from the group of photo-seekers would not reflect our preferences.

Finally, Trip Advisor creates a problem that is sadly ironic. If its reviewers praise a site for being charming and personal, it will soon no longer be so. In Kyoto, we saw this phenomenon clearly. The top site listed is the Golden Temple of Kinkaku-ji. Perhaps before it reached #1 it was somewhat crowded, like Disney on a weekday. Now that it reached top status, it is like Disney on Thanksgiving week. People fought for places to take photos. You do not even enter this temple, but merely walk around and admire the gold leaf.

We enjoyed walking the grounds (with a few thousand fellow photographers), but we certainly did not find it worthy of the top rating, especially after we saw several other places. 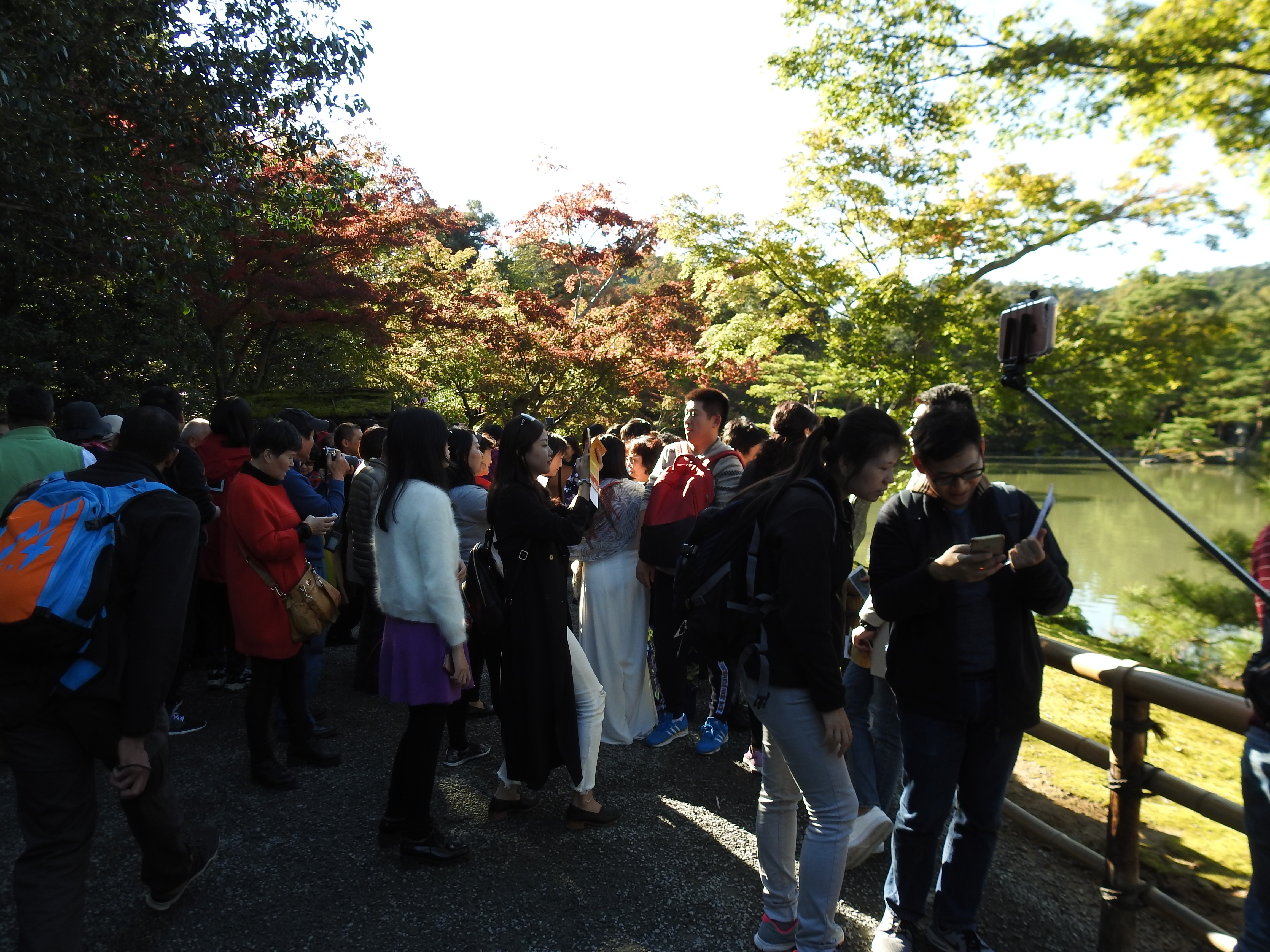 Here is a photo from one. 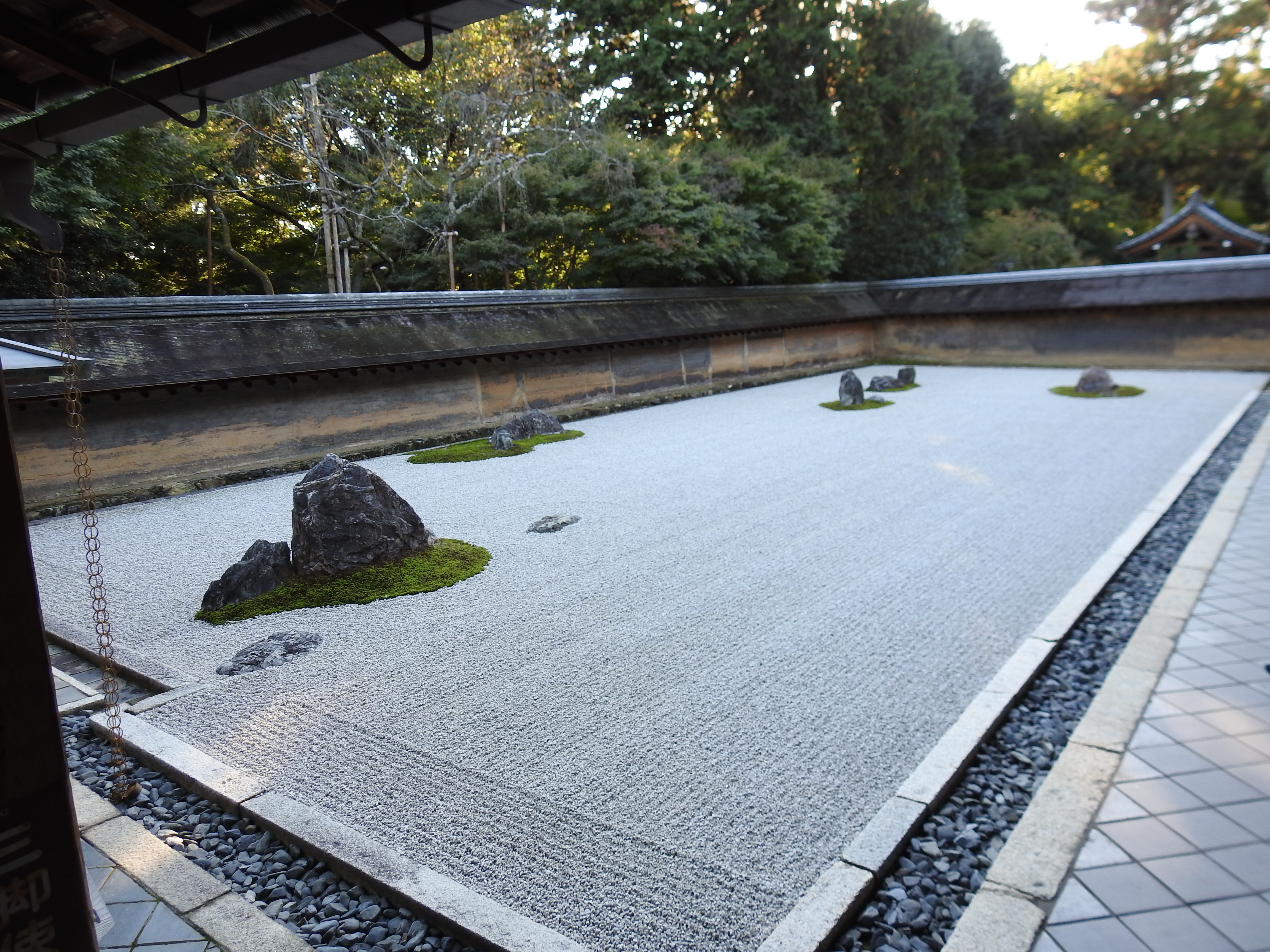 Here is an odd fact, this version of the temple is only 71 years old. The previous one, which had stood for centuries, was burned to the ground by a disgruntled monk.

I must believe that there is a really good story here. What makes a monk so angry that he gives up his vows and pretends he is Mrs O’Leary’s cow in Chicago? Did he grow tired of white robes and begging for rice? Was he unhappy about the liturgy?

I asked the family and they had a few thoughts:

Nevertheless, they built the new temple in 1955. It is really stunning and about 20,000 people each day have the pictures to prove it.

Kyoto also took us to a shrine that has over 10,000 torii gates. This shrine also has a 3-mile trek that involves climbing the equivalent of 60 flights of stairs and rising 600 feet. 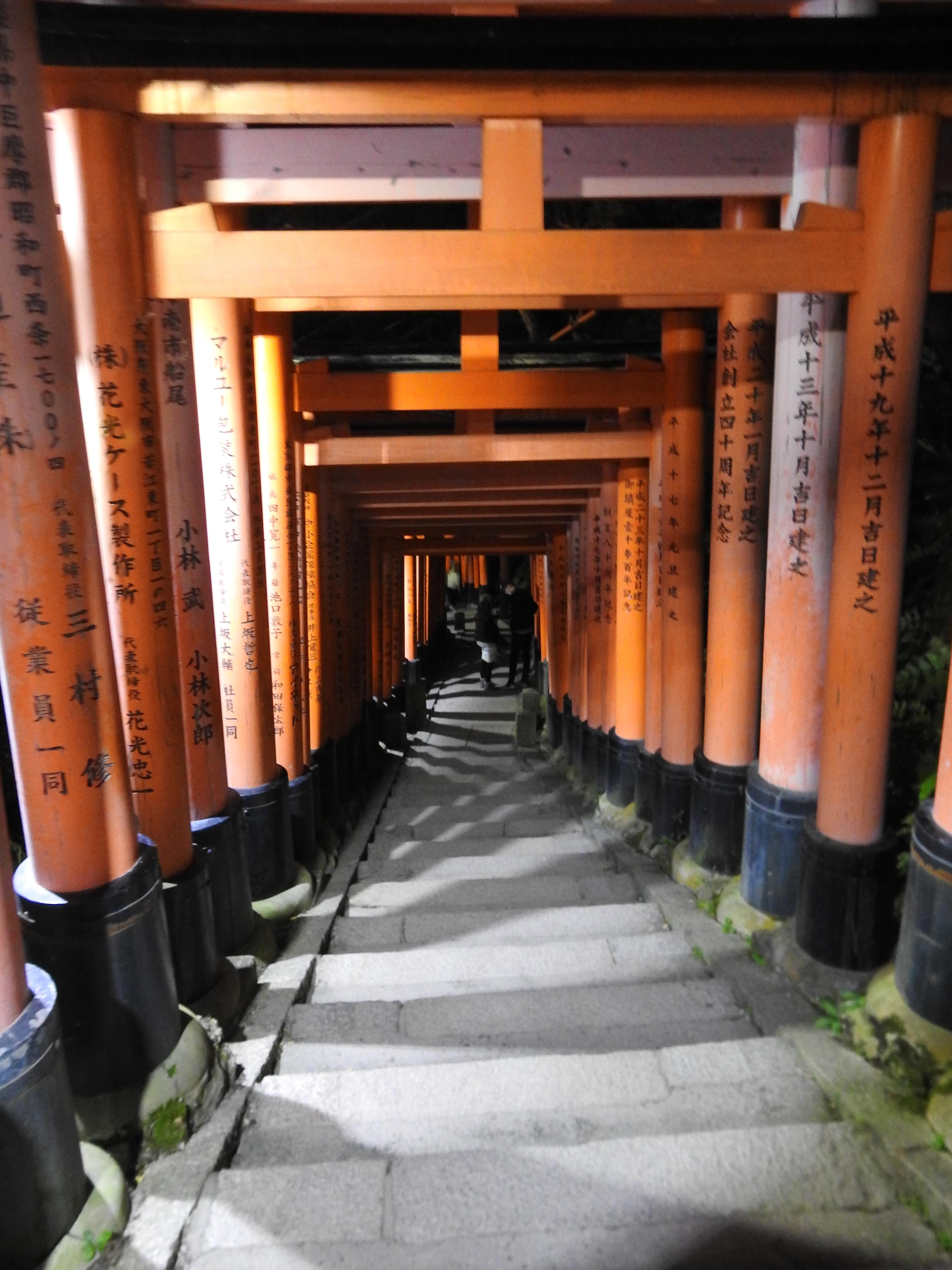 It was a lot of effort, but it was oddly tranquil. We arrived in time to see the lower sites and then hike during sunset. It is worth sharing that the Japanese have an odd time-zone situation. It is considered weak and undedicated to leave the office if the sun is up, so they lean toward early sunrises and early sunsets (who wants to have a 9:15 sunset in June if you have a 30 minute commute?). As a result, the sun will rise at 6:20 tomorrow and the sky will brighten by 6:00. But the sun will set at 5PM. It will be pitch dark by 5:40. This seems punitively early when you travel with 4 teenagers that think the day should start at 11AM or later. Left to the own devices, I suspect our team would sleep until sunset.

We saw a ritual at a Shinto temple during “Cultural Day”, one of the 15 most important dates on the Japanese calendar.  The monks played flutes.  If they had played this way in the San Jacinto Junior High, Randy Story would have thrown a chair in their general direction. 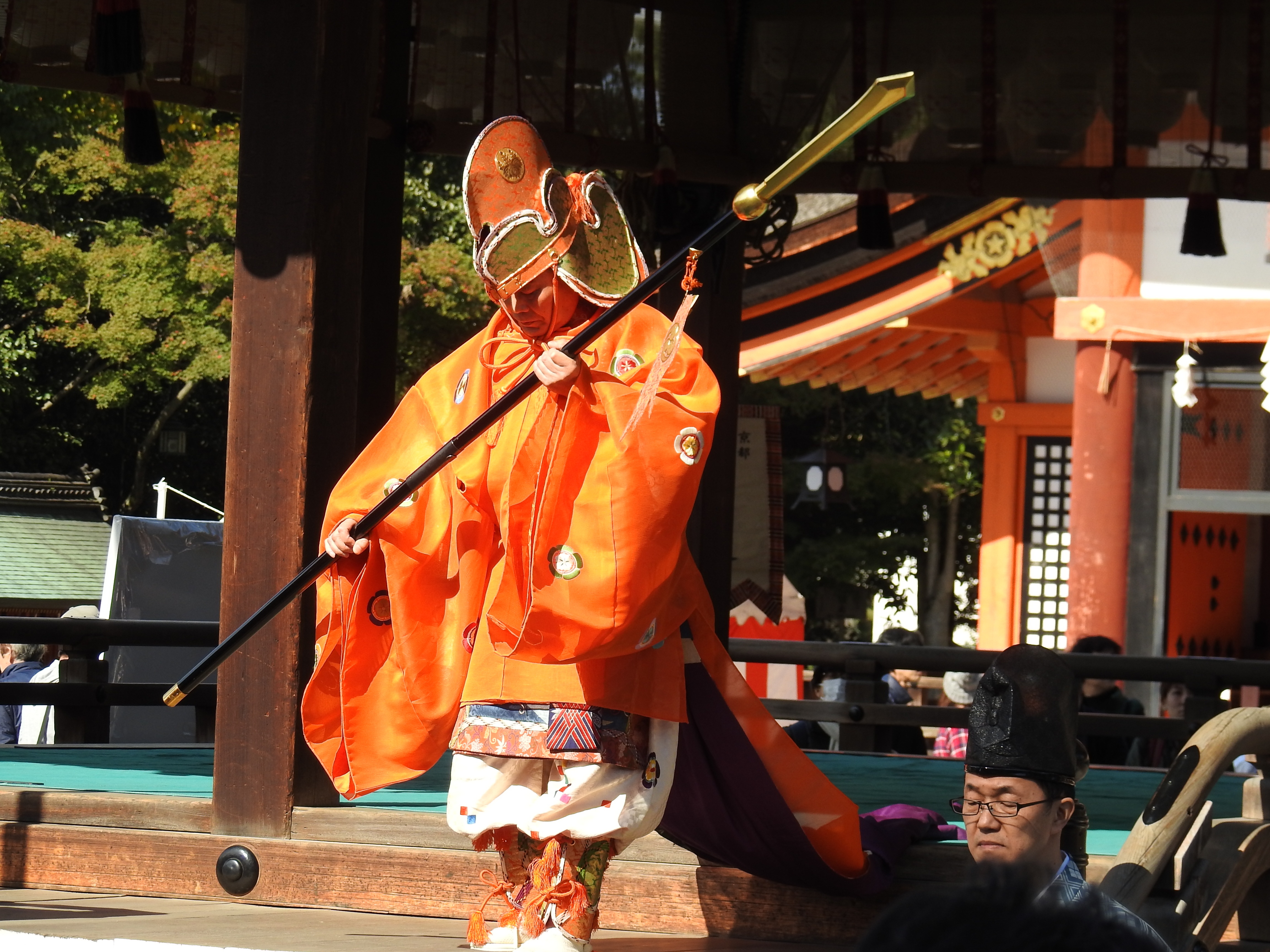 Yet, the parents are now at the stage in their lives when going to bed is easier, but so is rising. I have been popping up at first light, retrurning emails an enjoying coffee with the lovely Susie Ma’am. We try to wait as long as we can for the teen zombies. They think we storm in too early, we think we are burning daylight (especially with the 5PM sunset).

It is actually quite late and we have an early start tomorrow.  Have a wonderful weekend!

Let me leave you with a few extra photos from Kyoto. 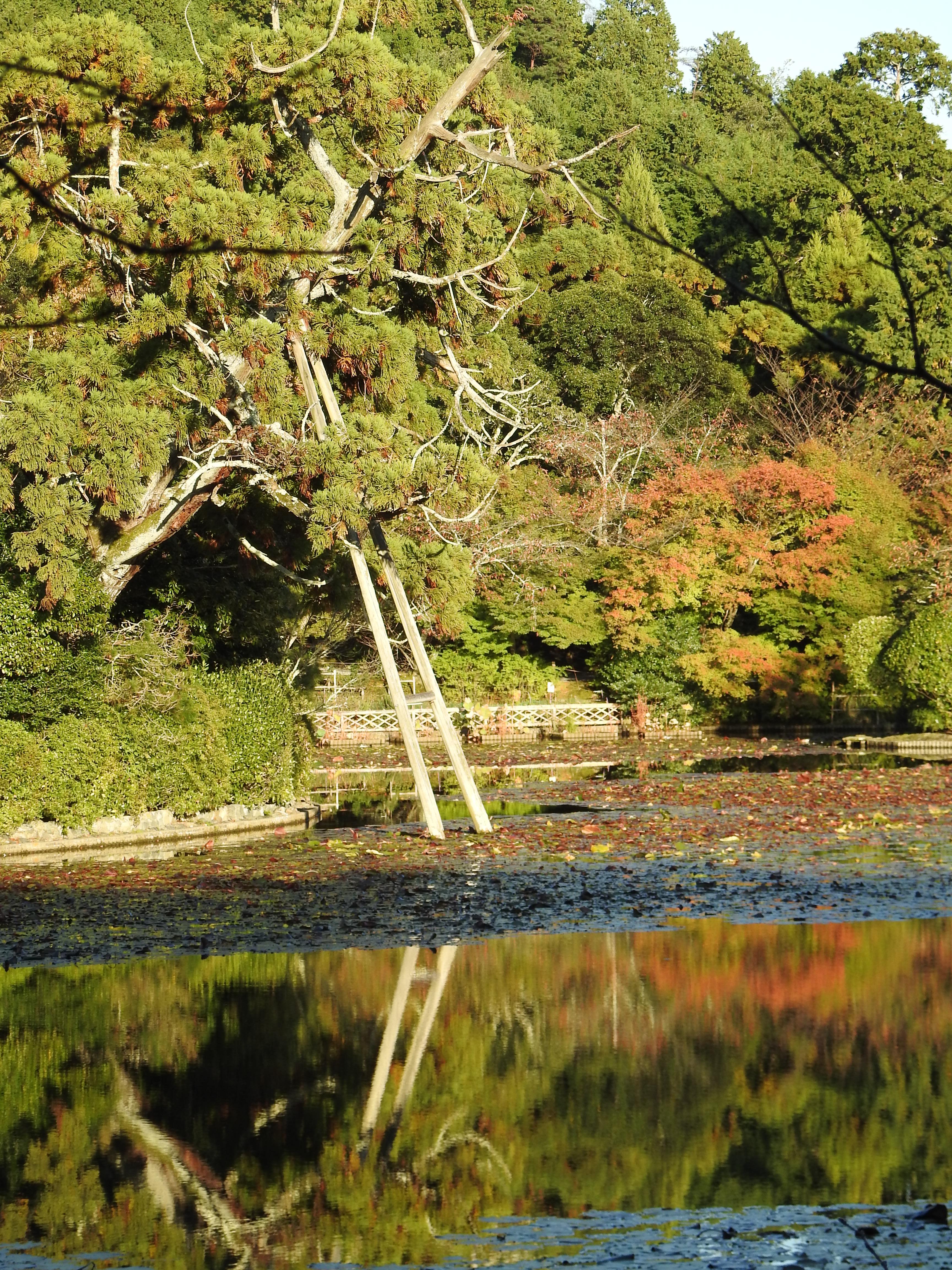 I cannot tell you how happy this photo made Susie! 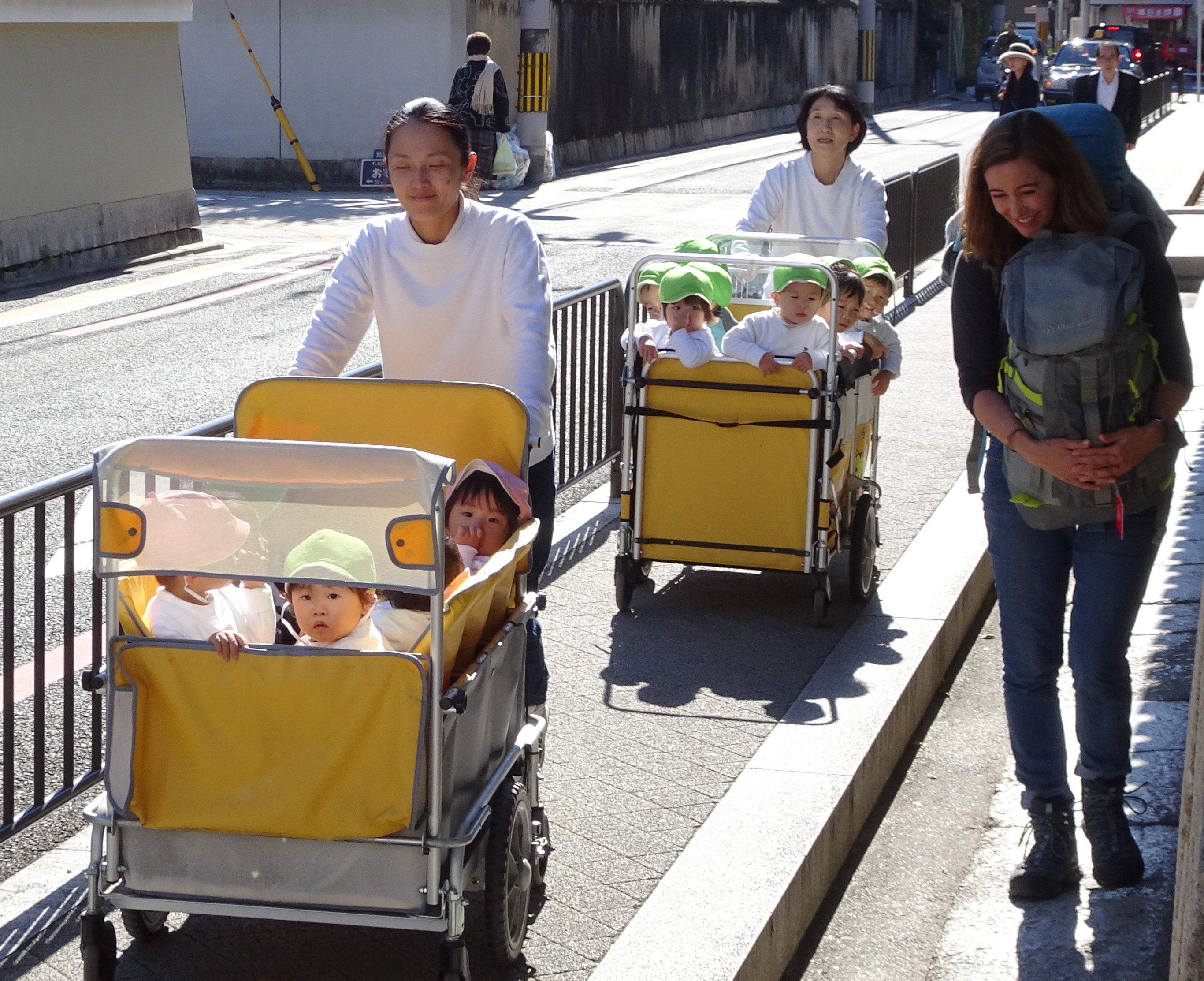 I think I am more excited about this “high five” than my friend here. 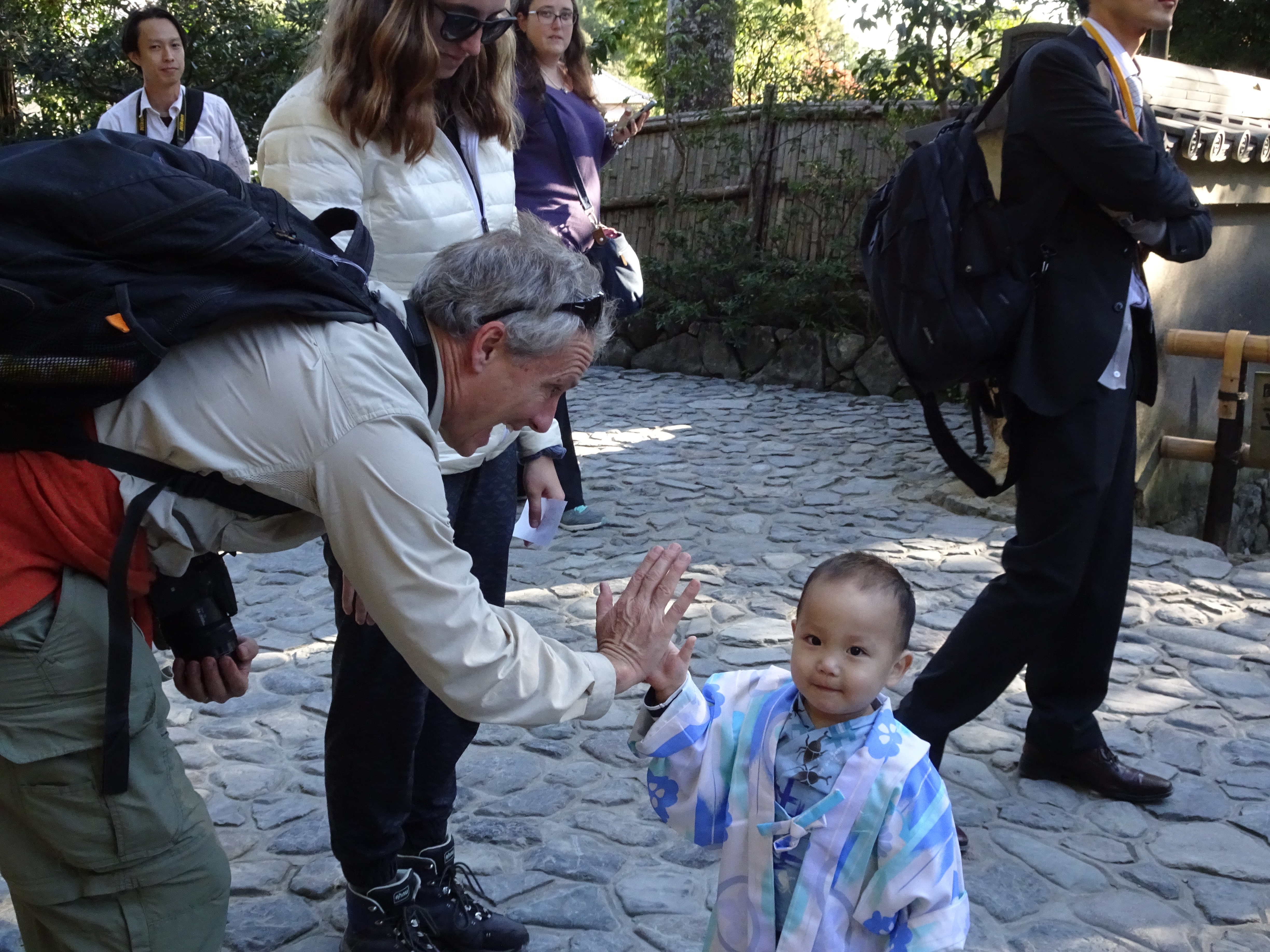 I also want to leave you with Susie’s attempt to differentiate the “first world” (the USA, Europe and certain areas of Asia) and the “third world” (you know the list – Africa, much of South America, areas of Asia). Here is what she sees as the “bright line” between these two extremes: 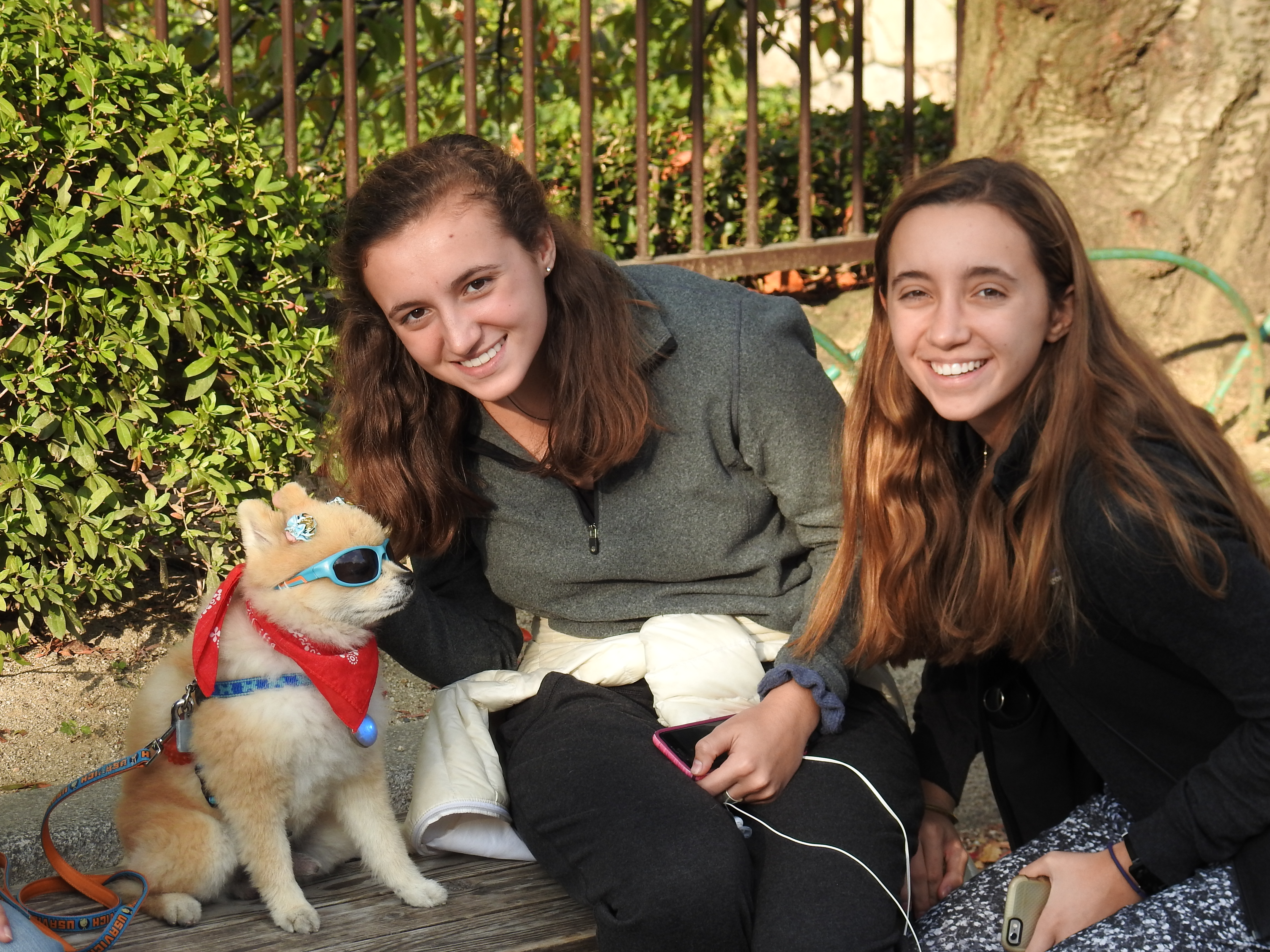 If you answered “yes” to both, you are likely in a a first world location. If you said no to both, what are you drinking, my friend?

PS  If you suspect I shared this insight from Susie so that I could include pictures of this dog, you would probably be right! 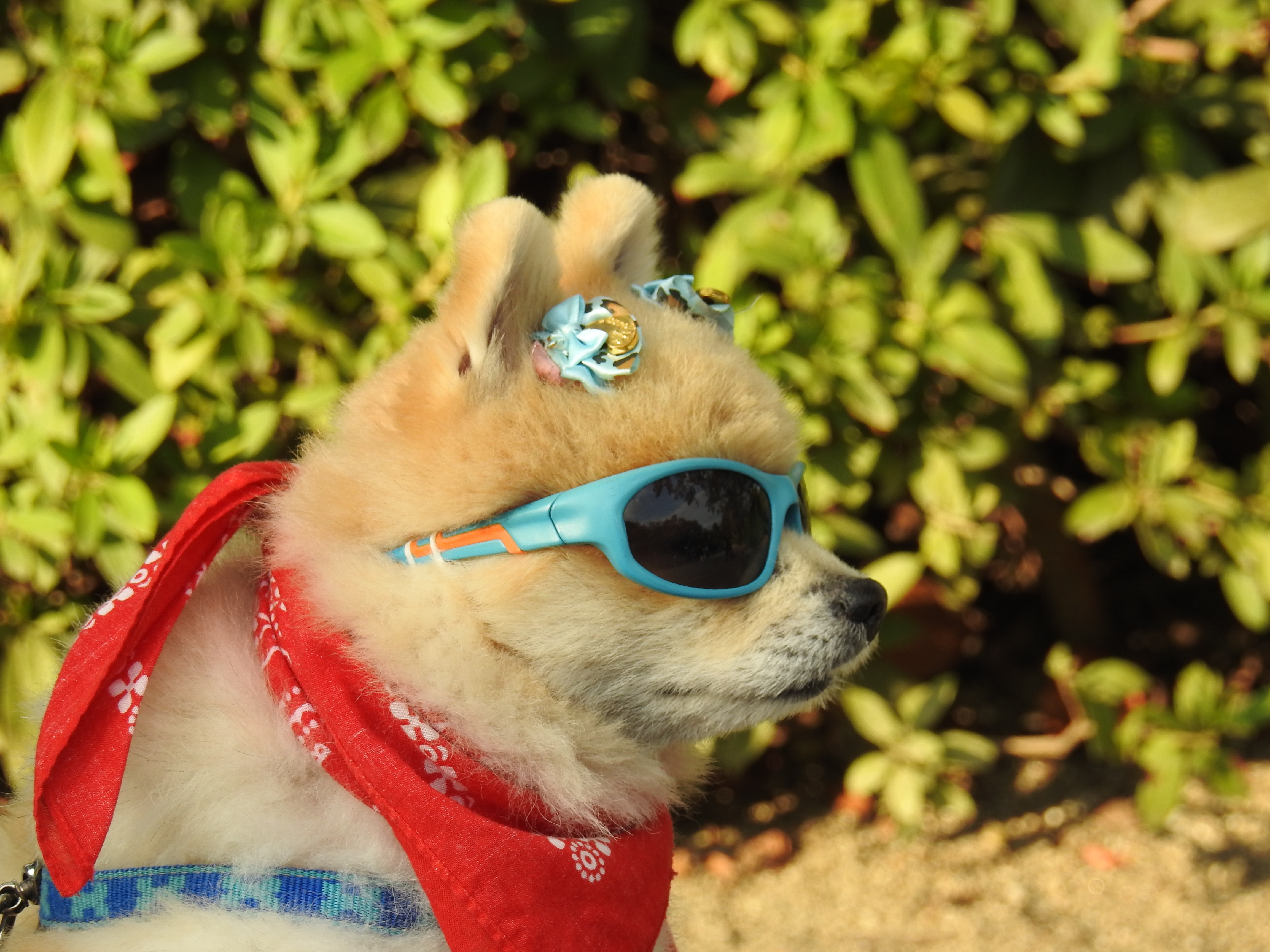