SIngapore is a Kindergarten Teacher 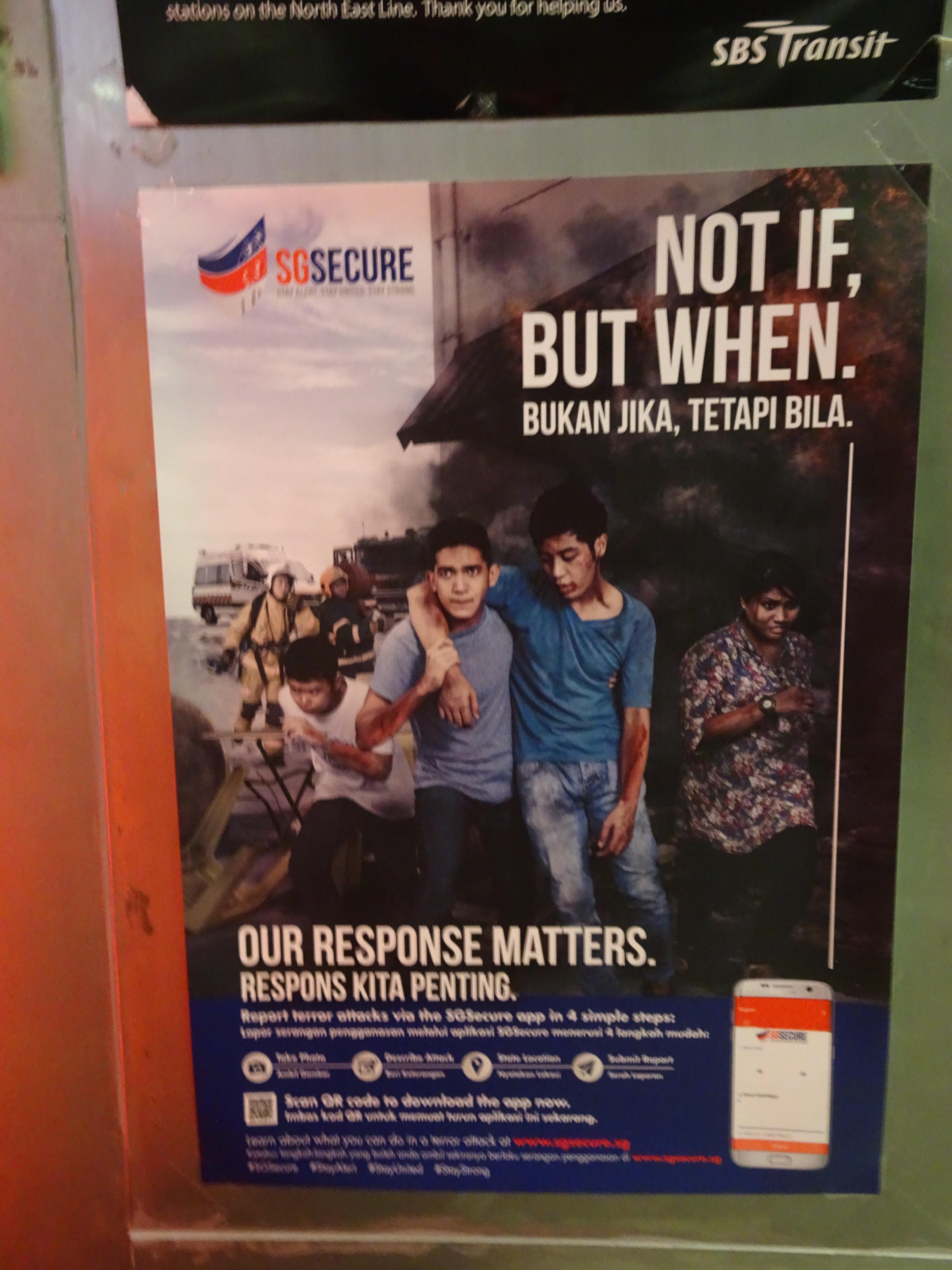 Yesterday, I said that Singapore offers tourists food and shopping. In retrospect, I understated one other Singaporean offering: order, safety and security.

Male Singapore citizens serve 2 mandatory years of military service. There are signs everywhere reminding you that there are cameras everywhere and that you may be searched “for your safety”.

On our first day, we took the subway and saw three soldiers in camouflage uniforms holding fully automated rifles.

Police roam the malls, streets and the subways in a highly vigilante way.

The city/country has launched two complimentary ad campaigns to support these efforts. The first deals with terrorism and is terrifying: “Not IF, but WHEN the terrorists attack.” We have seen posters and two different commercials at the movies. These commercials show a nice older woman that sees a TV report of a terror attack that killed multiple people with the face of the bomber. She hesitates and looks deeply concerned. We then see the day in reverse time. We see the bodies after the bomb. We see the terrorist placing the bomb next to a sweet family. We see him entering the building. We see him preparing the bomb. At that moment, we see the woman notice him doing something suspicious.

But we are now have an alternative ending. This time, she reports him to the police (who are fantastically polite and professional) and they escort him away. The ad ends with the ominous “not if, but when” line.

The second ad campaign explains all the things that the police do and that it is all for you and your safety. Once again, this campaign is supported by posters and ads. 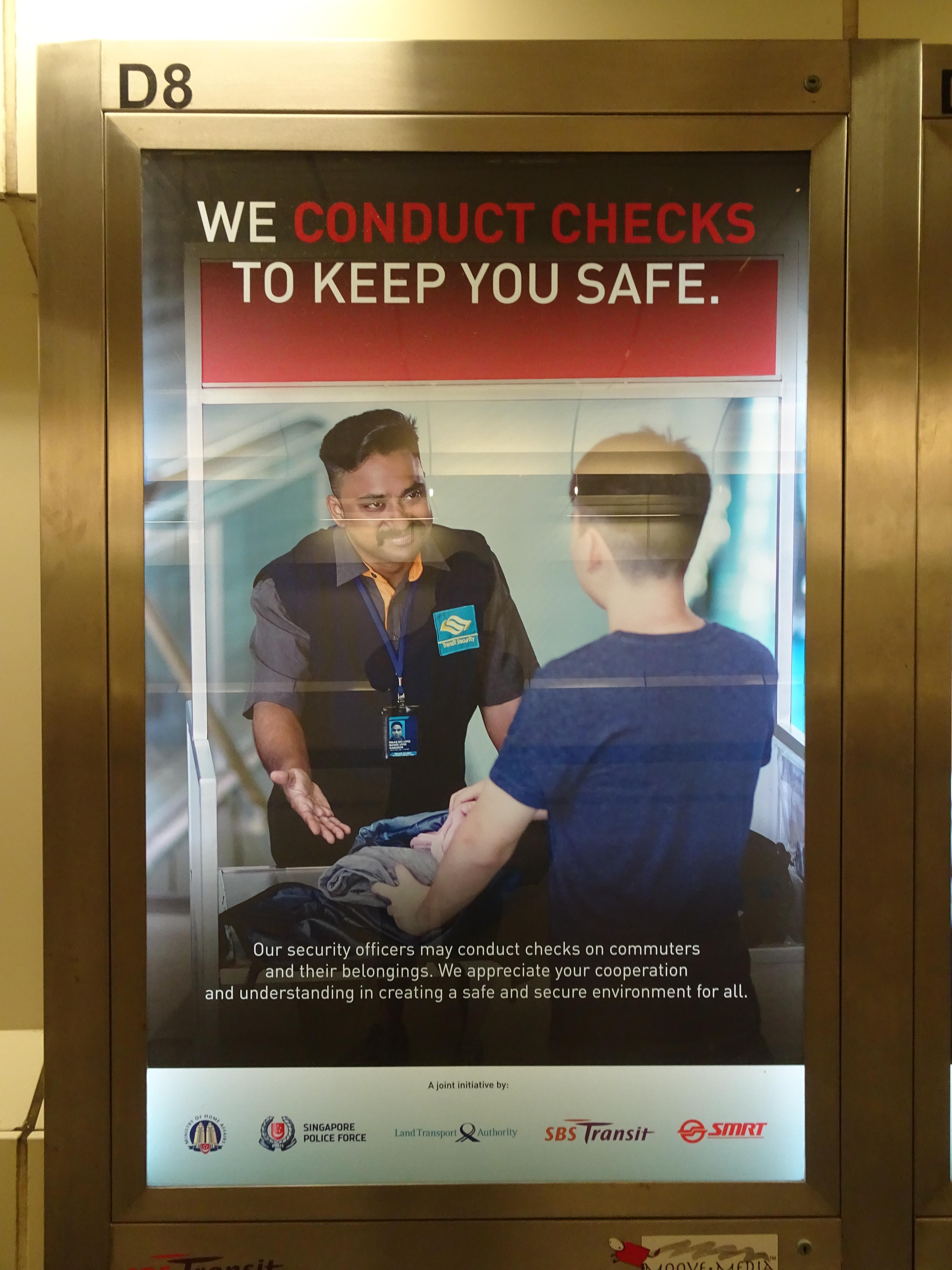 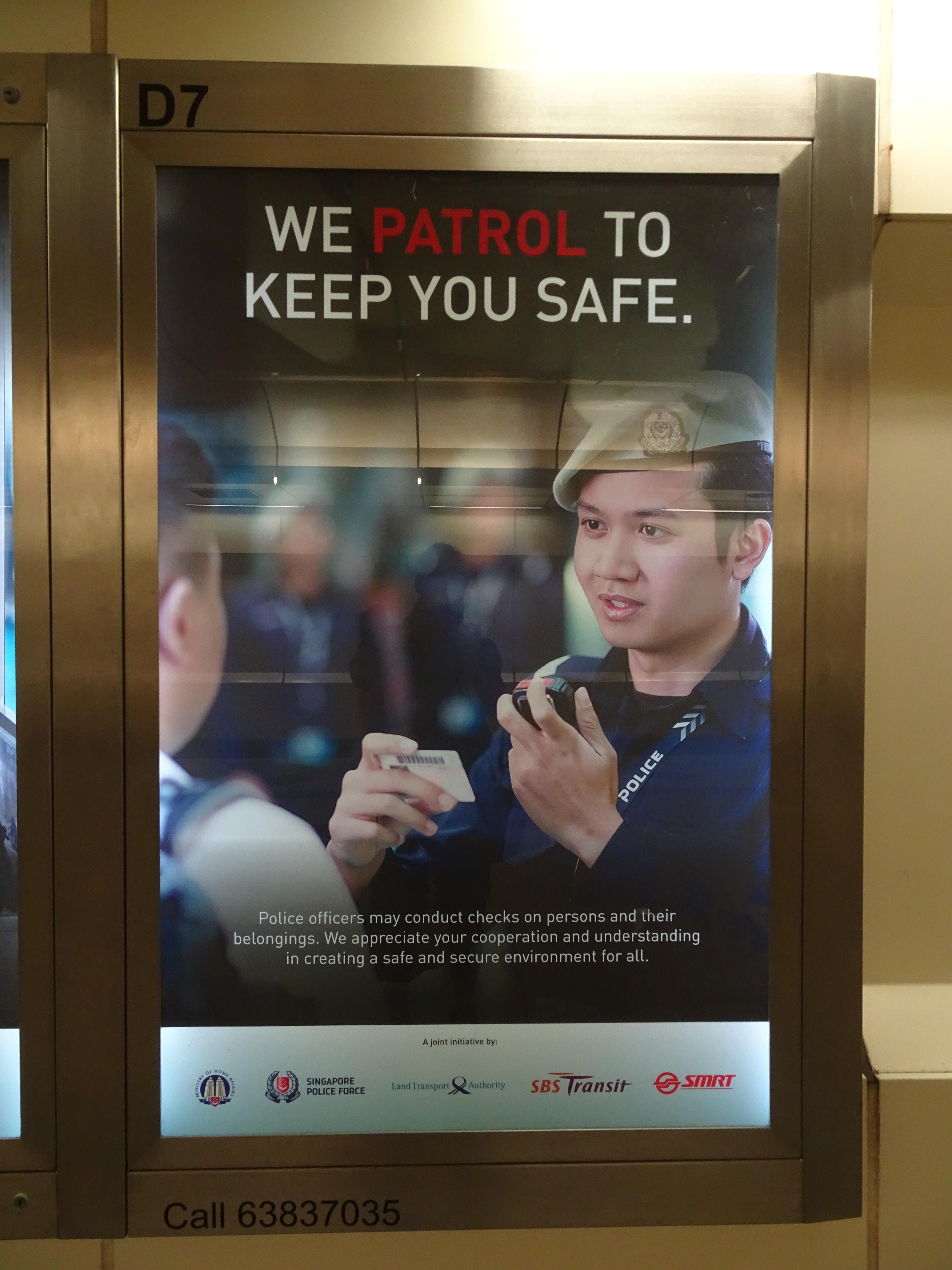 You may recall the story from Singapore about 20 years ago when a US citizen was to be caned (whipped with a length of bamboo) for littering with gum. You are constantly reminded to throw your trash into the bins. Almost no one has a dog – we saw 2 live dogs in 3.5 days in the city, and this included about 14 miles of walking. We saw signs explaining that all large dogs must wear muzzles. We suspect that the dearth of dogs is the result of very strict licensing laws and massive fines for dog poop.

Alcohol is taxed heavily, often tripling the cost of a glass of wine or beer.

Signs have reminded me to not walk and text (“don’t be a phone zombie”), 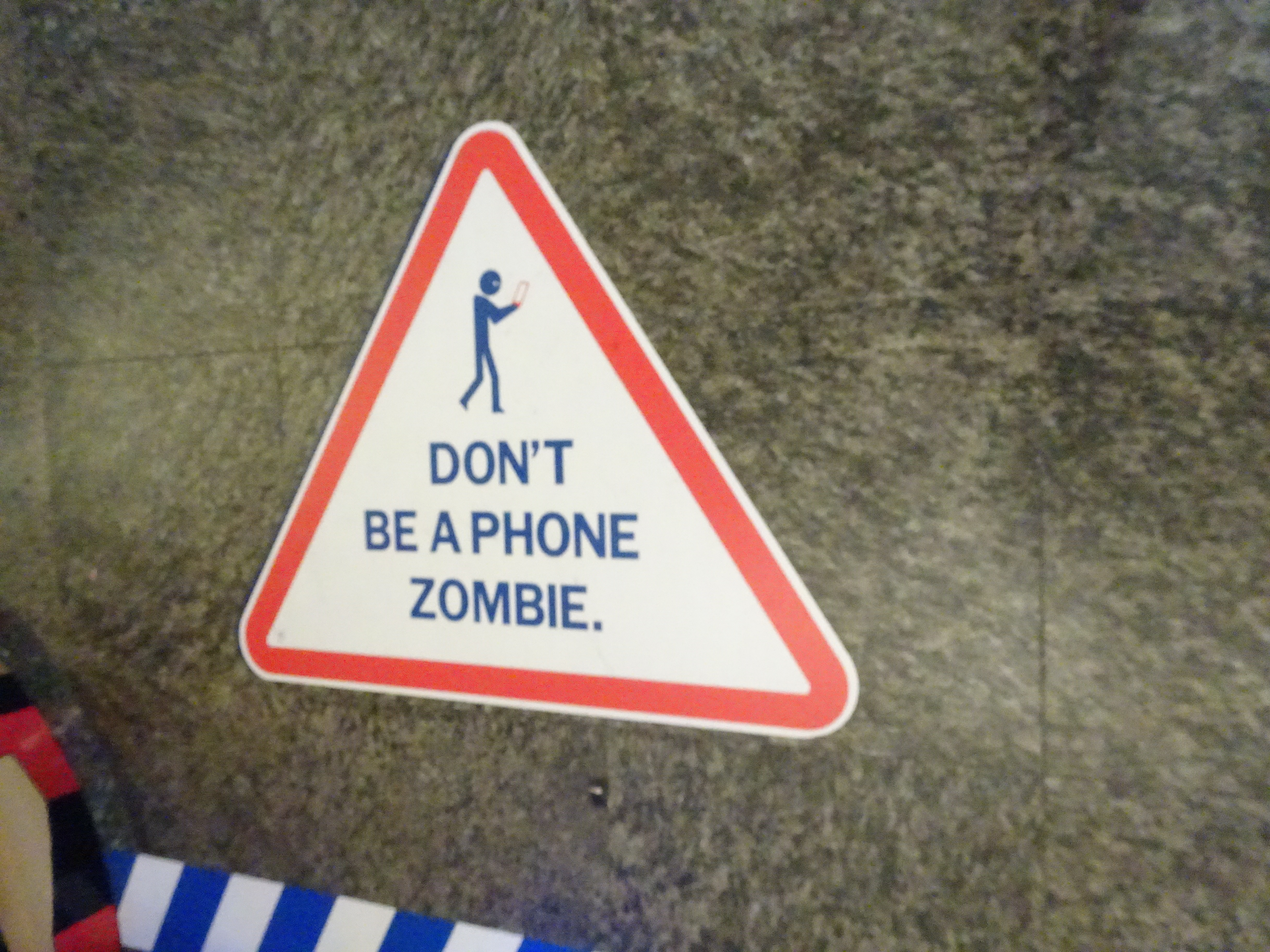 to be polite (give up your seat for the elderly), 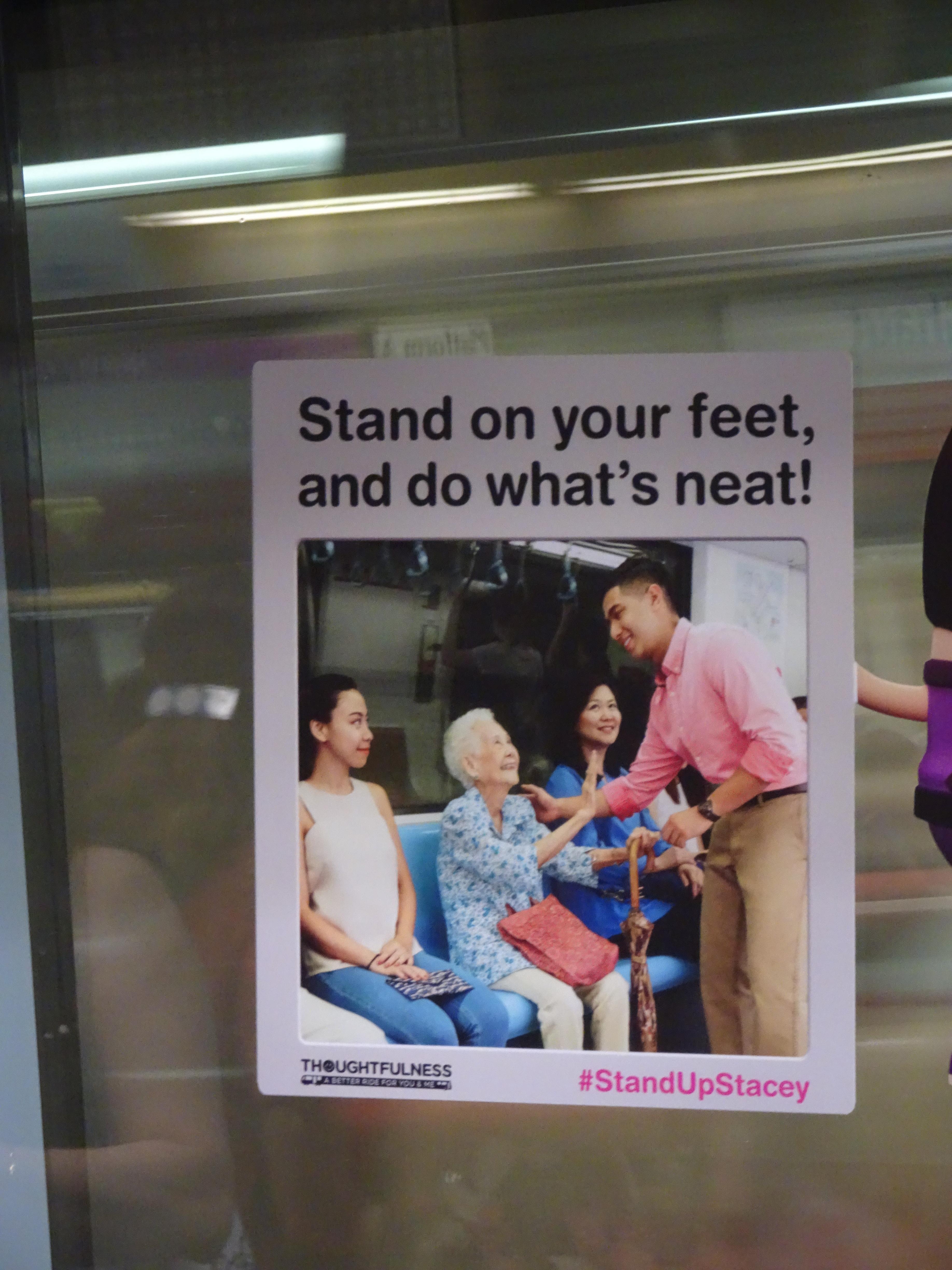 to stand on the left/walk on the right, to avoid the dangers of balloons (apparently mylar balloons can stop trains), 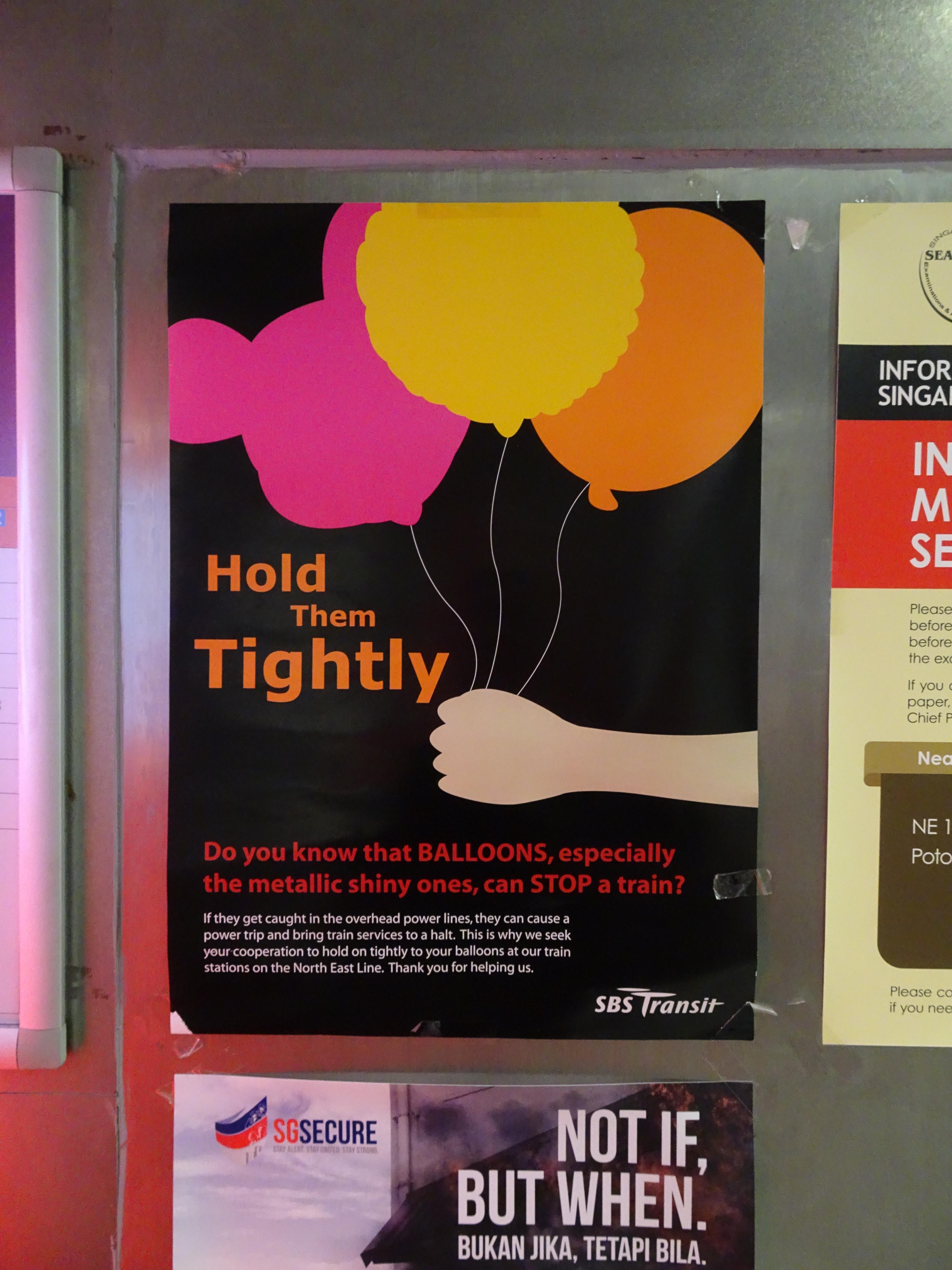 and to be efficient travelers (remove your bags in the subway and “do the ‘martin shuffle’ to move to the center of trains). 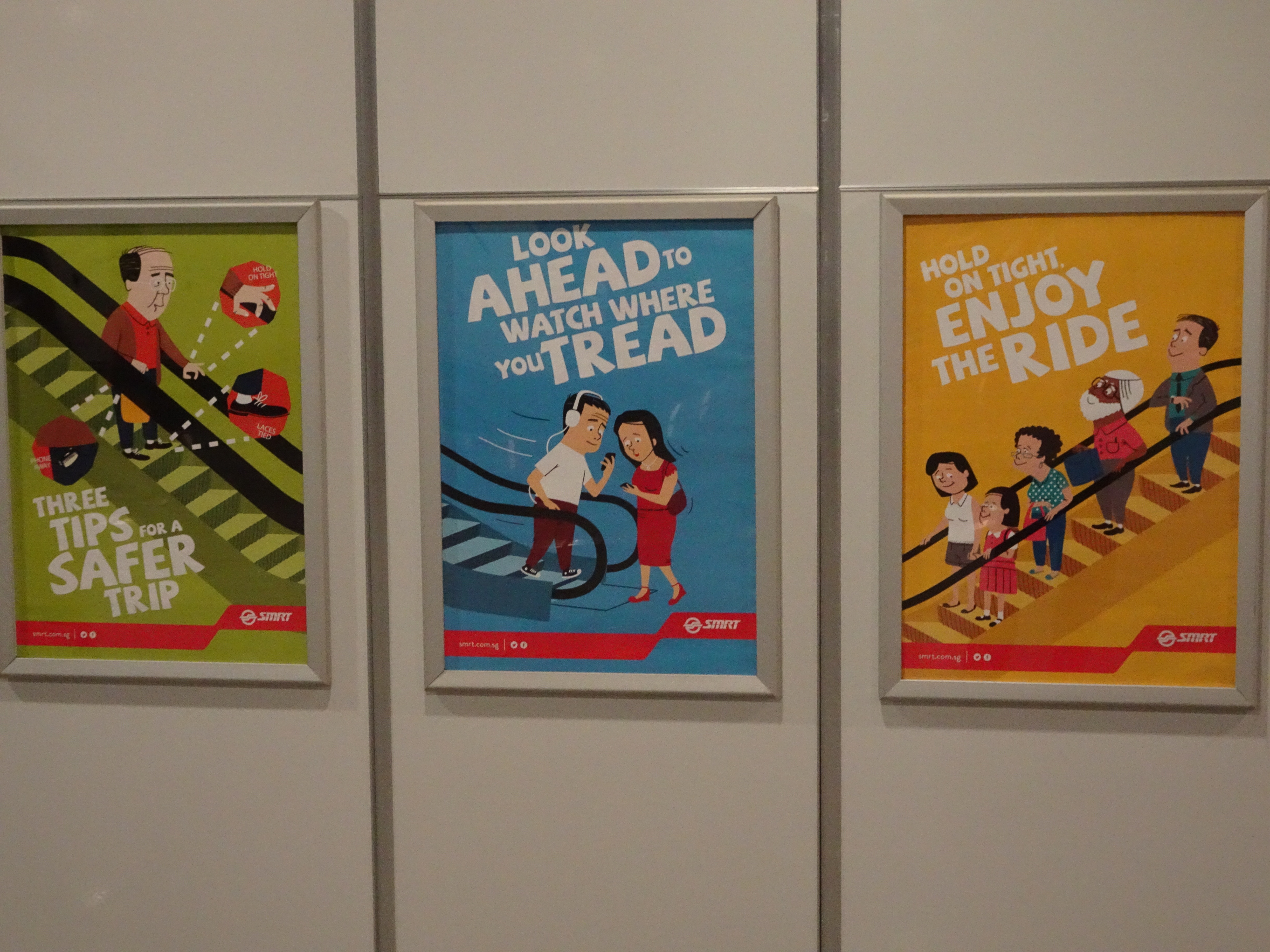 It finally occurred to me. Singapore is Ms. Starkey, our kids beloved Kindergarten teacher. Ms Starkey cared deeply about our kids and wanted what was best for them. She also was quite certain that she knew better than they what “best for them” meant. She also laid down the law. There was no frivolity in her classroom.   Trash ended up in the trashcans. It was orderly, efficient and systematized. No one chewed gum (for that matter, no one drank wine either). Students formed orderly lines (queues) and respected the rules.

As a result, Singapore hums with efficiency. This city-state values collectivism versus individuality. This is not a country to be a maverick individual who marches to your own drummer.

But if you value safety and community, this is a great place for you.

Having shared that observation, I will show some pictures from one of the iconic Singapore destinations, its botanical garden. Yup, exactly the type of attraction that would have appealed to Ms Starkey.