Rice Cakes, But No Sunrise 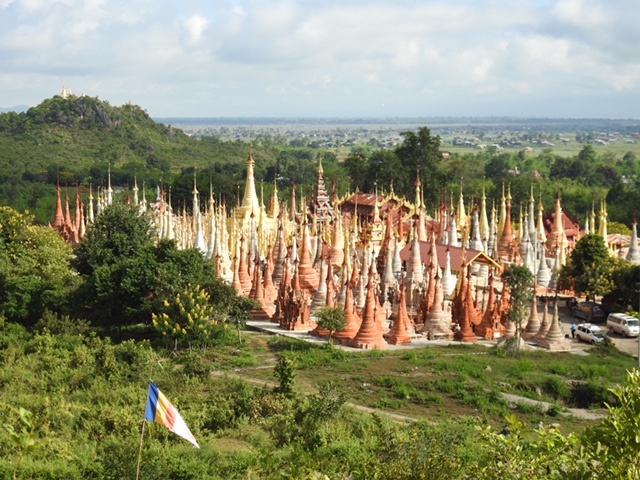 Wiley Baskin is an easy travel companion. He rarely complains, is agreeable and willing to do whatever the more opinionated family members lobby to do. His great disposition is almost always his best companion.

I say “almost” because there is one exception to his easy-going and agreeable nature: waking up early. To say he dislikes the early departure is to commit the grandest of understatements. He hates the pre-dawn awakening with the heat of a thousand suns. 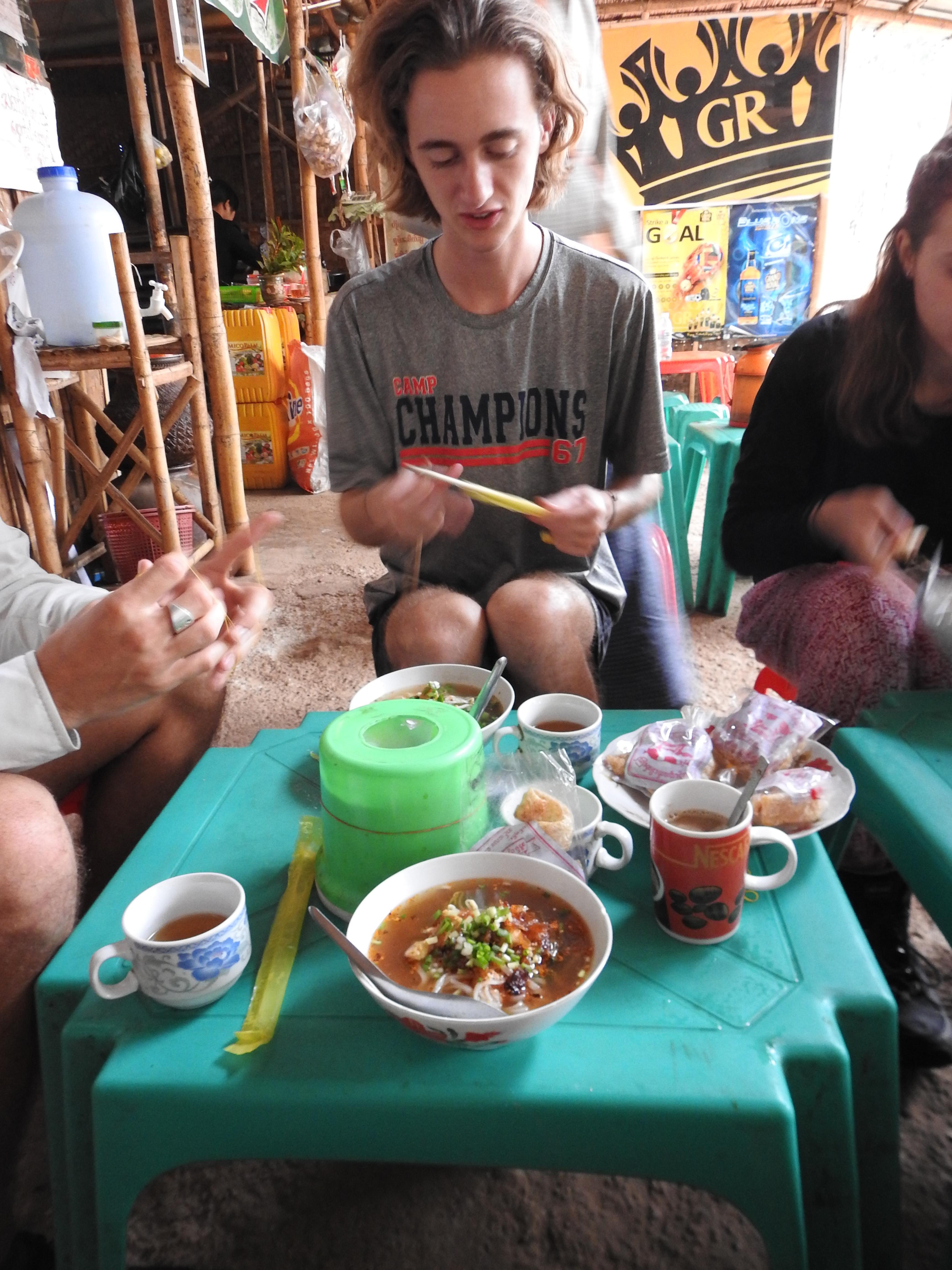 In Bagan, we had to wake early three times:

As a result, we cannot say, “Look Wiles – it stinks at first, but the payoff is worth it!” The payoff has not yet been worth it.

But we are optimists, so today we woke at 4:40 to see the sun rise over the rice fields of the Inle Lake region and the surrounding mountains. It is a thing of profound and humbling beauty. I know because I have seen pictures, but not from direct experience.

It was overcast this morning again.

I tried to avoid making eye-contact with Wiley. To be clear, no one was happy about this 4th early morning in the last 6 days, but his face shared the greatest displeasure.

We hiked up the hill to a monastery for the non-existent sunrise. Almost on cue, our lovely guide gestured to the Eastern horizon and declared, “Here is where you would have seen the beautiful sunrise!” 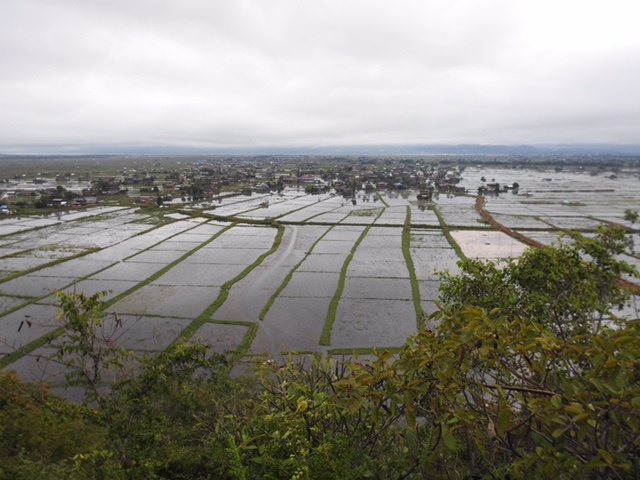 While the day started on the wrong foot, it ended up a good one. It is amazing what you can see when you start your day at 5AM.

Without giving you a blow-by-blow, I will share the highlights.

We visited a local, weekly market. 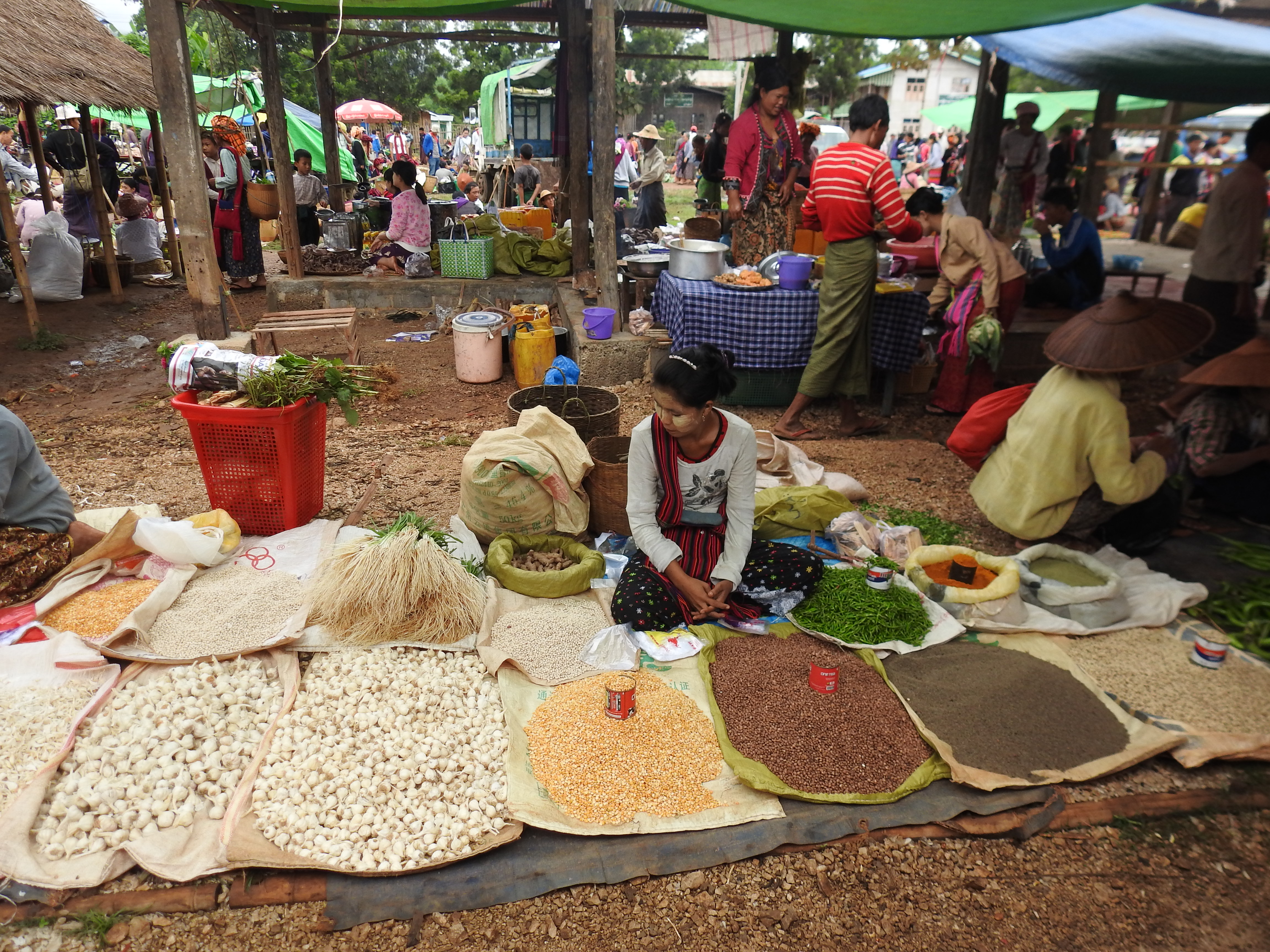 We were clearly the only westerners there and (judging from the looks we got), we were among the few that had ever attended this market. I was struck by the fact that over 75% of the boys wore soccer jerseys from European football clubs. We are literally around the world, but the fashion of choice was shirts from Manchester United, Arsenal and FC Barcelona.

We also noticed a lot of real-time butchering going on. People would carry live chickens in and other people would walk out with chicken parts. 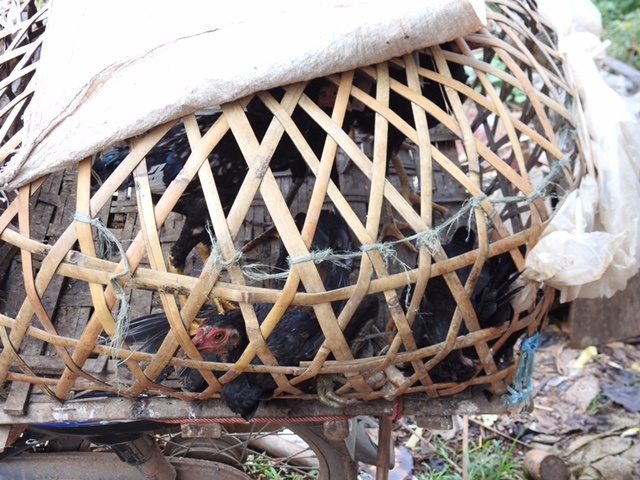 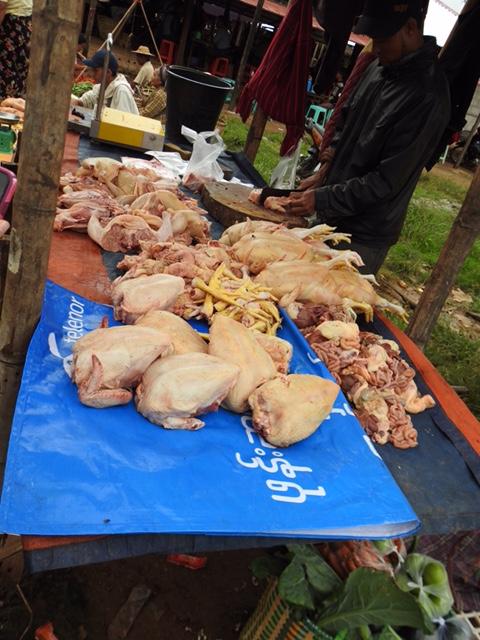 The fish were still wriggling.   This was not an HEB.

The second highlight was the pagoda and a series of stupas surrounding it. Some were ruins, others recently built. There were 3 or 4 different colors for the stupas, so they created a look that almost resembled Disneyland. 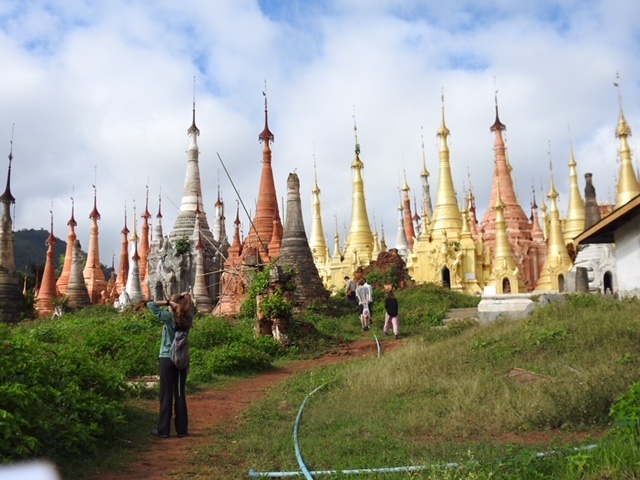 We walked up above to see the whole site and were buzzed by a drone. At first, we thought we had come upon a beehive, but soon realized that we were being filmed by someone below.

[Note: it is an annoying irony that a country can lack the most basic of toilet facilities, but still have one of the blights of Western technology. Having the drone buzzing above us certainly reduced the illusion that we had stepped back into time.]

Our final treat was one that our guide had never done before. He arranged for us to take two long wooden canoes (one propelled with paddles, the other with an engine) to go through the canals to a home to see the production of rice cakes. 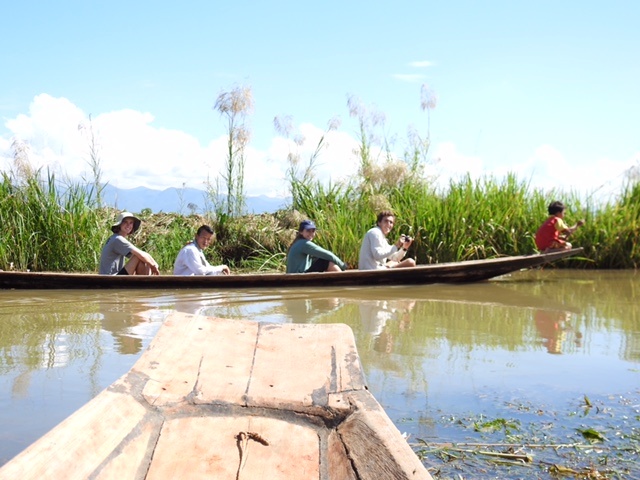 The first home was making the basic rice crepe. They make a batter from rice and water and then spread it over a piece of clothe that looks like a drum head. About 10 second later, the cook skillfully peels the paper-thin crepe of the heated surface and places it on a bamboo rack to dry. They will dry of about a day. 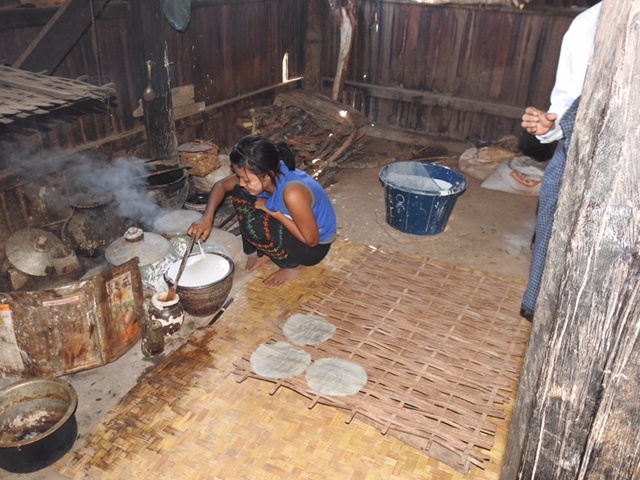 The next step is the exciting one. The cooker heats sand in a large flat wok-like pan that is roughly 2.5 feet wide. She heats the sand. She then puts the crepe in the sand, puts sand on top, and flips it. The crepe then starts to expand substantially while she stretches it.

We watched as she did roughly 100 of them. Being the slightly OCD crowd that we are, we insisted on stacking them for her. 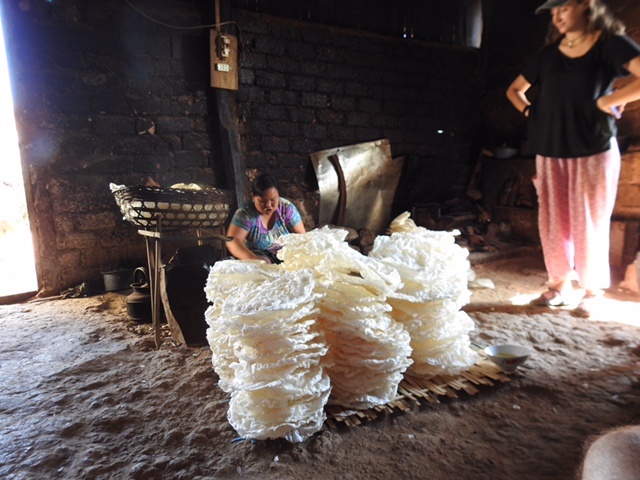 We had rice cakes and tea before leaving. Terrill tried to make a few cakes (she was not as skilled as the master, but proved to be surprisingly competent). Liam played guitar and we had a lovely visit. Our guide said we were the first group he had ever taken into a home this way, so we felt pretty excited to be doing something unique. 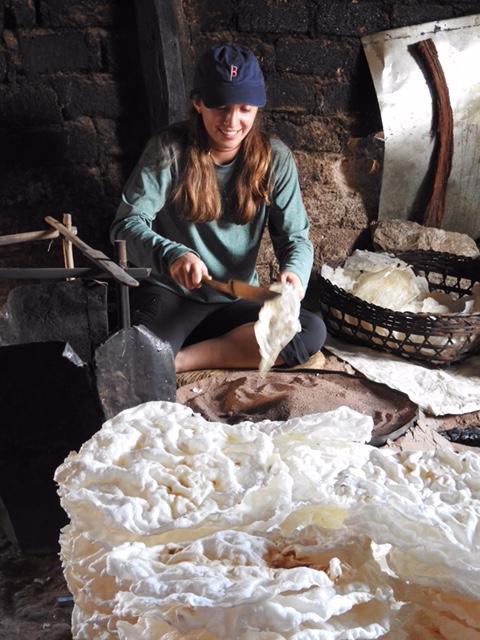 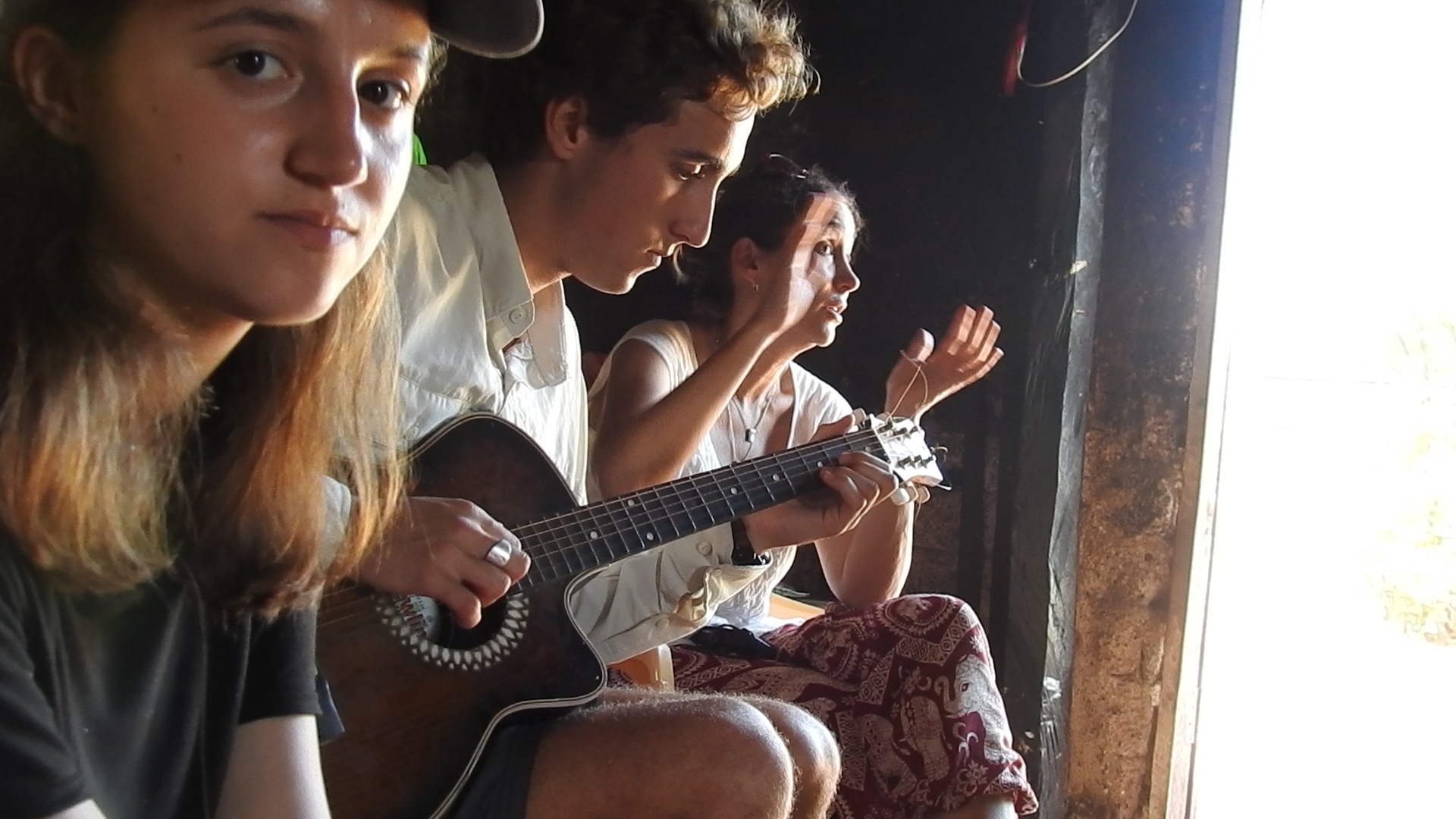 Tomorrow, we have the fire balloon festival. I look forward to reporting on it!