Our Balinese Family (Without Elizabeth Gilbert) 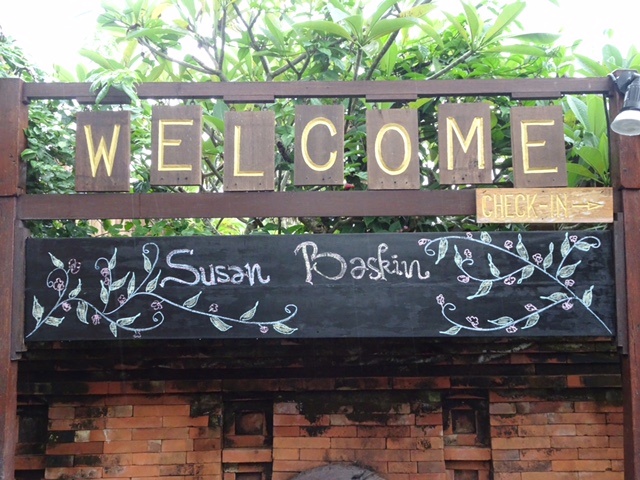 People in Bali are strikingly nice, especially for a tourist community. As a general rule of thumb, the kindness of natives drops as the density of tourists increase. The novelty of seeing someone from a different culture becomes replaced with a tsunami of souvenirs.

For example, we found New Zealanders to be incredibly kind and excited to see people from the US. After all, it is a hike to get to New Zealand. By contrast, incredibly popular places in Europe are far less excited to see Americans. Paris is the first example that most people give, but you can see the same thing in Venice or Vienna. Of course, people who are in the service industry (restaurants, souvenir shops and hotels) all act pleased to see you, but the typical “person on the street” starts to see you more as an invader than a guest.

In my mind, there is a tipping point when the tourist density becomes too much and the mood changes. Bali is making me rethink this a bit.   Children still wave as you walk by. People in towns smile. There is a warmth to the Balinese culture that imbues this small island with a sense of love and appreciation.

We might soon see the exception when we go to Ubud. Ubud is a city in the middle of the island with several temples near it as well as idyllic rice fields. Ubud is also the city that Elizabeth Gilbert ultimately “found herself” in the book “Eat, Pray, Love” which was later made into a movie staying Julia Roberts as Elizabeth Gilbert. If you want to remain off the radar screen and idyllic, having a #1 bestseller and a Julia Roberts movie starring your town is not the right way to make that happen. Apparently, one restaurant sells shirts that say “Eat, Pray, Leave” on them. They do not really mind the visitors, but it is the concentration of people of the same demographic who want to stay multiple weeks to meditate and find themselves that are wearing down the population. The fact that they seem to be wanting to find themselves by finding Elizabeth Gilbert makes the endeavor seem all the more counterproductive for all concerned.

After Susie did a little research and found a wonderful bit of insight from a person responding to a blog. The writer was complaining about how people trying to find themselves like Elizabeth Gilbery are destroying Ubud. Usually, I do not share long quotes, but this is so well-written that it is worth sharing:

“I see what you’re saying, and I can understand being grossed out by people thinking that they can magically achieve spiritual enlightenment by hanging out in a place that they perceive as ~exotic~, but the tourist industry helps to drive the economy of the country. It keeps people fed and sheltered. As long as the tourists are polite and respectful to local people while they’re there, I don’t think the people whose shops they buy things from or restaurants they patronize particularly care what their motivations for going there are. That money could send someone’s kid to college, and unlike other situations where a culture is being commodified, the money is going directly to the local people, not to some American exec. What I got from this article was that white expats who have been in Bali for a while (labeled in the article as the “pony-tailed men who used to live in Northern California”) are angry that the new white expats (“the 30-40 something women wearing caftans seeking enlightenment”) are making the town less “quaint” and exclusive, which suggests to me that they have the exact same view of Bali — as being a sort of stage set on which they can project their own fantasies about being the sole white person in an exotic land — as they’re accusing the new expats of having. I may be wrong, but having heard very similar stuff from expats in China (generally the kinds of expats who have little to no relations with actual Chinese people), I’m very wary of foreigners who rush to attack foreign tourists who they accuse of ruining a place’s “authenticity.” People who actually live in a place are generally much more concerned with the well being of their family — do they have running water, a working fridge, money to pay for school — than they are with their community being “authentic” enough for the tastes of the local expatriate population.”

So I am guessing that Ubud will not be the exception to the rule of Balaniese hospitality, We will just avoid the pony-tailed California expats. I will report more when we get there. Until then, the folks of Bali seem to have an unusual capacity to welcome strangers.

The people at Ngeluwungan Villa are even nicer.   OK, I know they have an incentive to be, but this is not like most hotels. The staff are not just helpful and pleasant, they seem legitimately delighted to meet and know us. Their Trip Advisor ratings (over 150) all rave about the people. We have found a Balinese home. 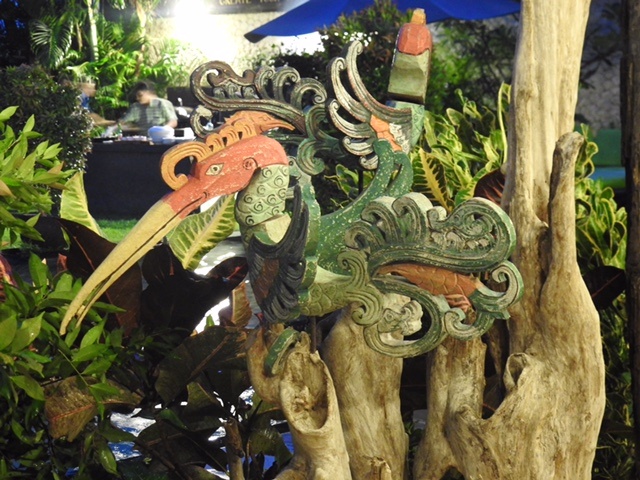 They also help suggest outings and then arrange all the logistics. While they do charge for their driving services, the rates are so reasonable to make one wonder if they make much at all on this part of their service.

Some of the outings are fairly touristy, like our visits to two temples. Despite the rush of fellow photographers at these sites, I was taken by both of them. While Indonesia is Muslim, Bali is Hindu. These two temples clearly value the harmony of humans and nature, especially water. One is built on a rock over the ocean. 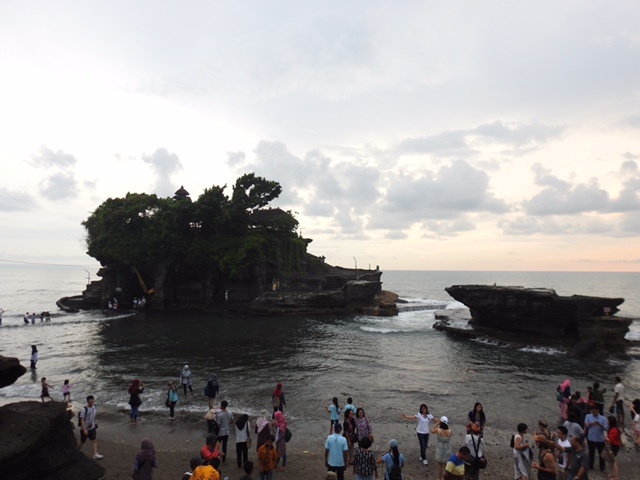 Access to the temple varies with the tide. Not one is the setting beautiful, the builders of this temple clearly strived to build a structure that blends with nature. The temple/shrine does not dominate the site, but strives to complement it. The affect was quite striking as long as you were not overly distracted by the horde of selfie sticks and fellow admirers.

The second temple was also over water, but this one is built on two small man-made islands in a mountain lake. The scale of the site was not overwhelming. In fact, the temple is actually modestly sized. But the effect was serene. 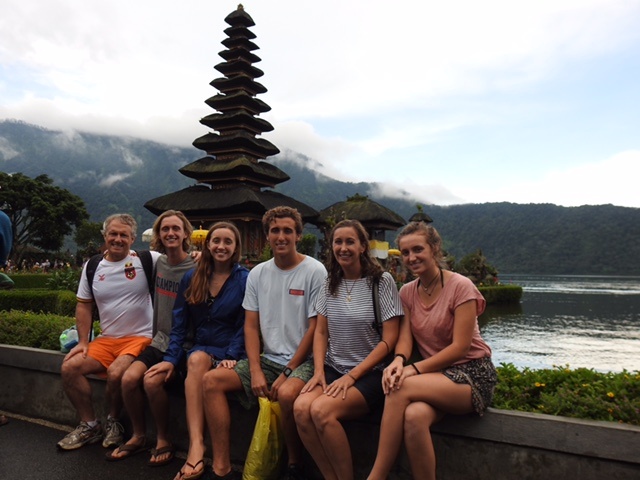 The rest of the site alternated between being intriguing/beautiful and kitschy. Looking one way, we would see a beautifully carved and painted door nested in a carved-stone entryway. But turn another way and you see a topiary Eagle or a painted strawberry sculpture. 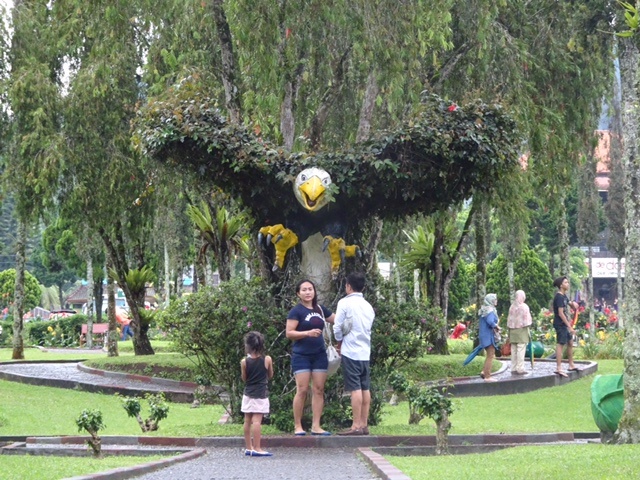 We noticed that a huge clump of visitors were all attempting to get the same shot of the temple. We went closer to investigate and found out why. This image is on the 50,000 rupee note (roughly $3.85). 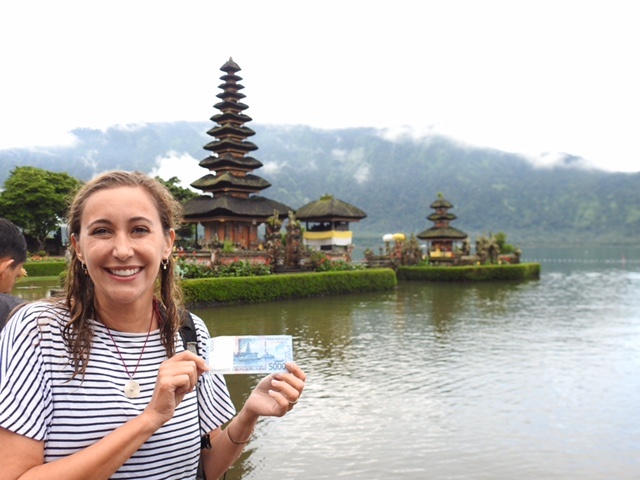 We took the same touristy shot. We took a similar picture in China near Xing Ping with the 20 RMB note.

The other trip they organized was to “Gede’s Secret Waterfall”. Gede (pronounced like an Australian saying “G’Day”) is the general manager of the Villas and the head of their “family”.

There is a very famous waterfall near the second temple that also hosts throngs of hikers, climbers, “caverners” and general lovers of beauty. We drove by the place and it was a beehive of activity. Gede instead took us to a smaller waterfall (“only” 150-175 feet) where we were the only humans there. The affect was truly intimate. We swan in frigid water and attempted to swim under the waterfall. I was shocked to feel the power of the current from the waterfall. None of us could get within 10 feet of it and that required a massive effort. 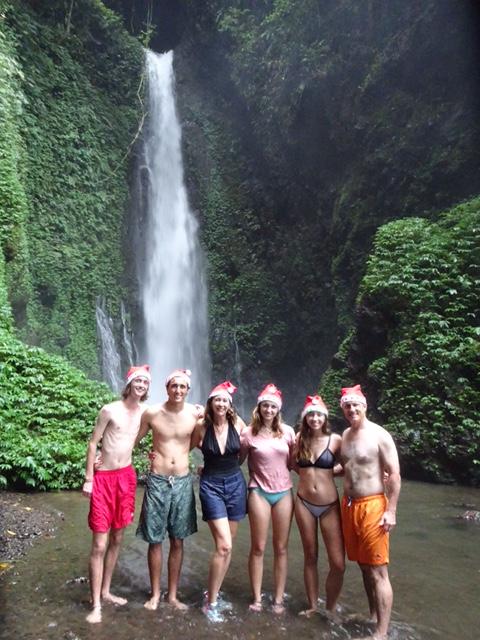 The other part of the trips is the opportunity to learn about Bali while Gede practices his English. We confirmed something Susie read in “Eat, Pray, Love” – all Balinese children are named “1”, “2”, “3” or “4” to reflect birth order. We think there are four different names for males and females, but could not confirm with certainly. We do know that if you are the 5th child, they just start over again. Gede is the 7th child, but the fifth boy, so he shares the same name (“Gede” means “1”) with his oldest brother and his only son. Fascinating.