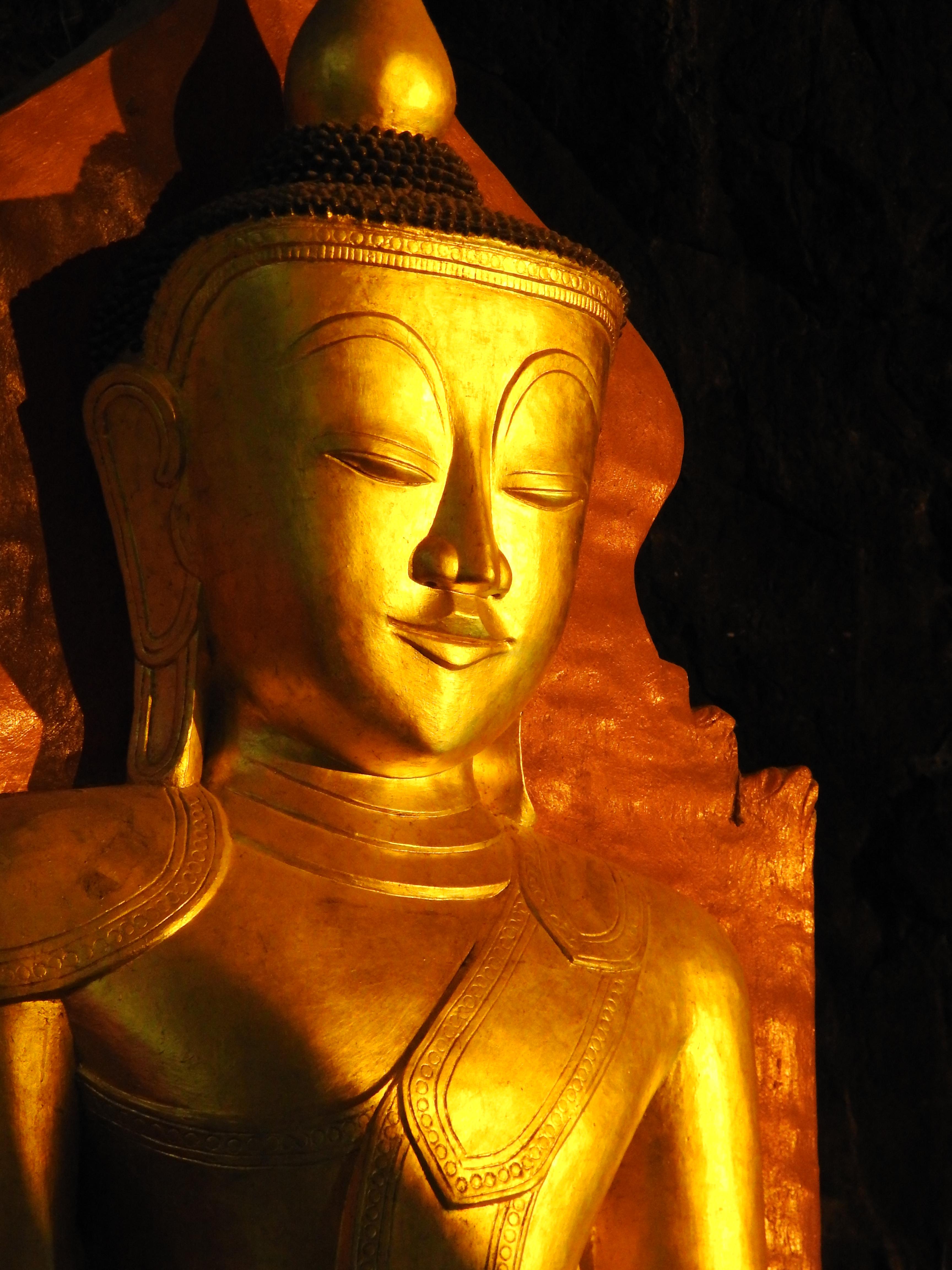 Pindaya is famous for their caves. OK, perhaps “famous” is too strong a word. Even by Myanmar standards, it is not quite an “A” list destination. Think of it as the Marble Falls of Myanmar, except replace the Bluebonnet Café with a cave full of Buddhas.

On our climb to the caves, we posed next to a stupa perched on a small cliff.  The photo was fun, but the trip down was even more so. 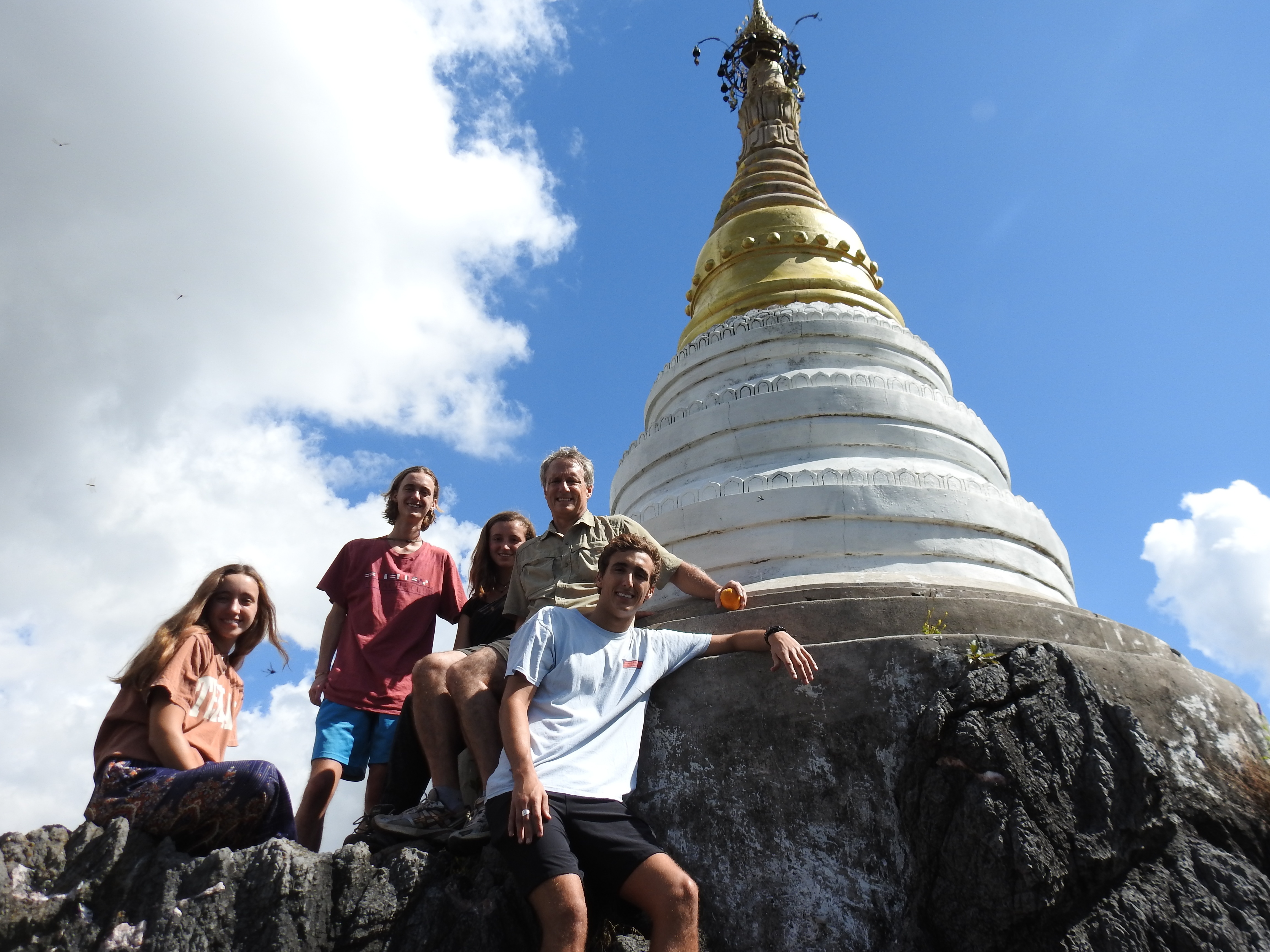 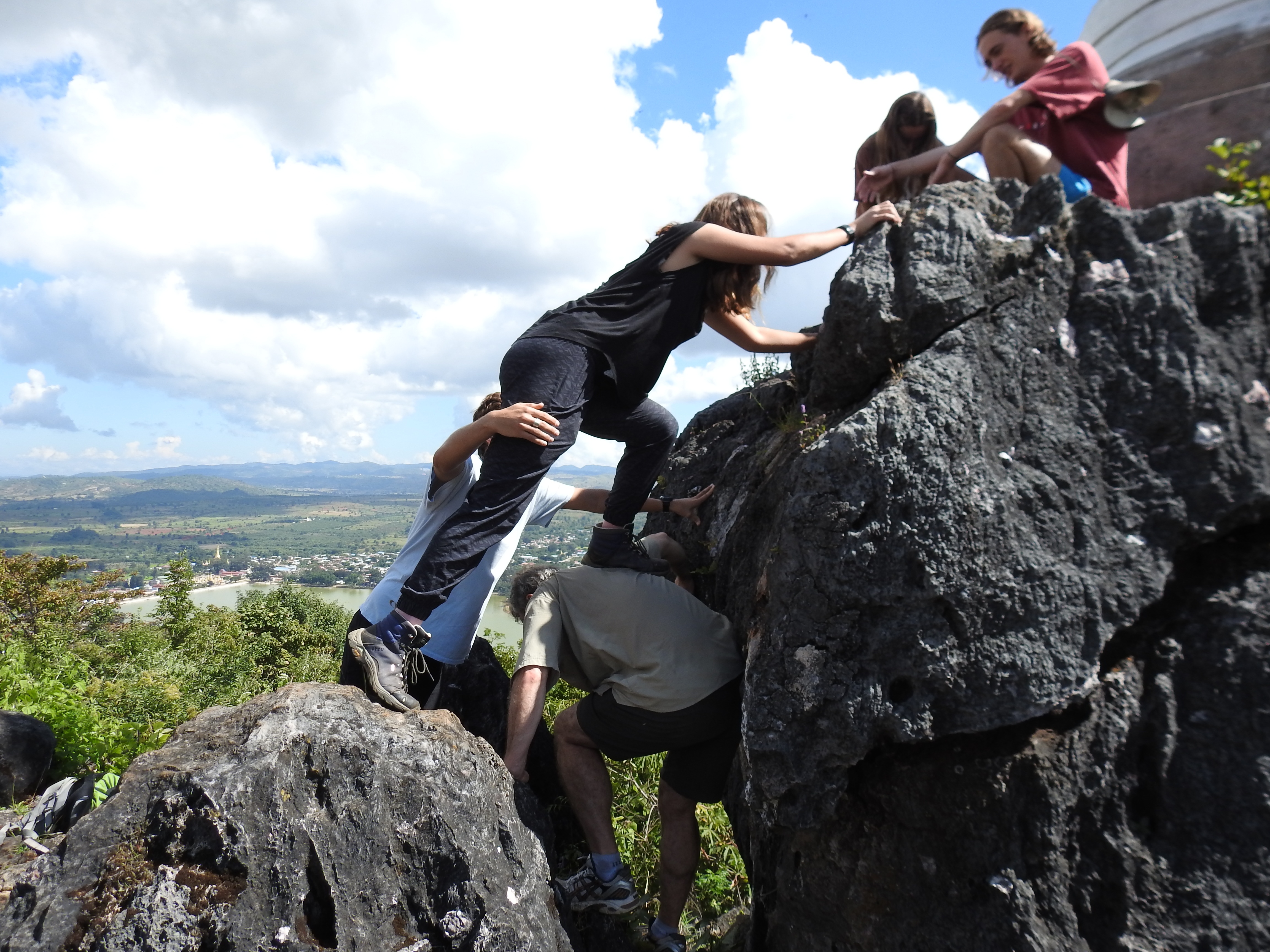 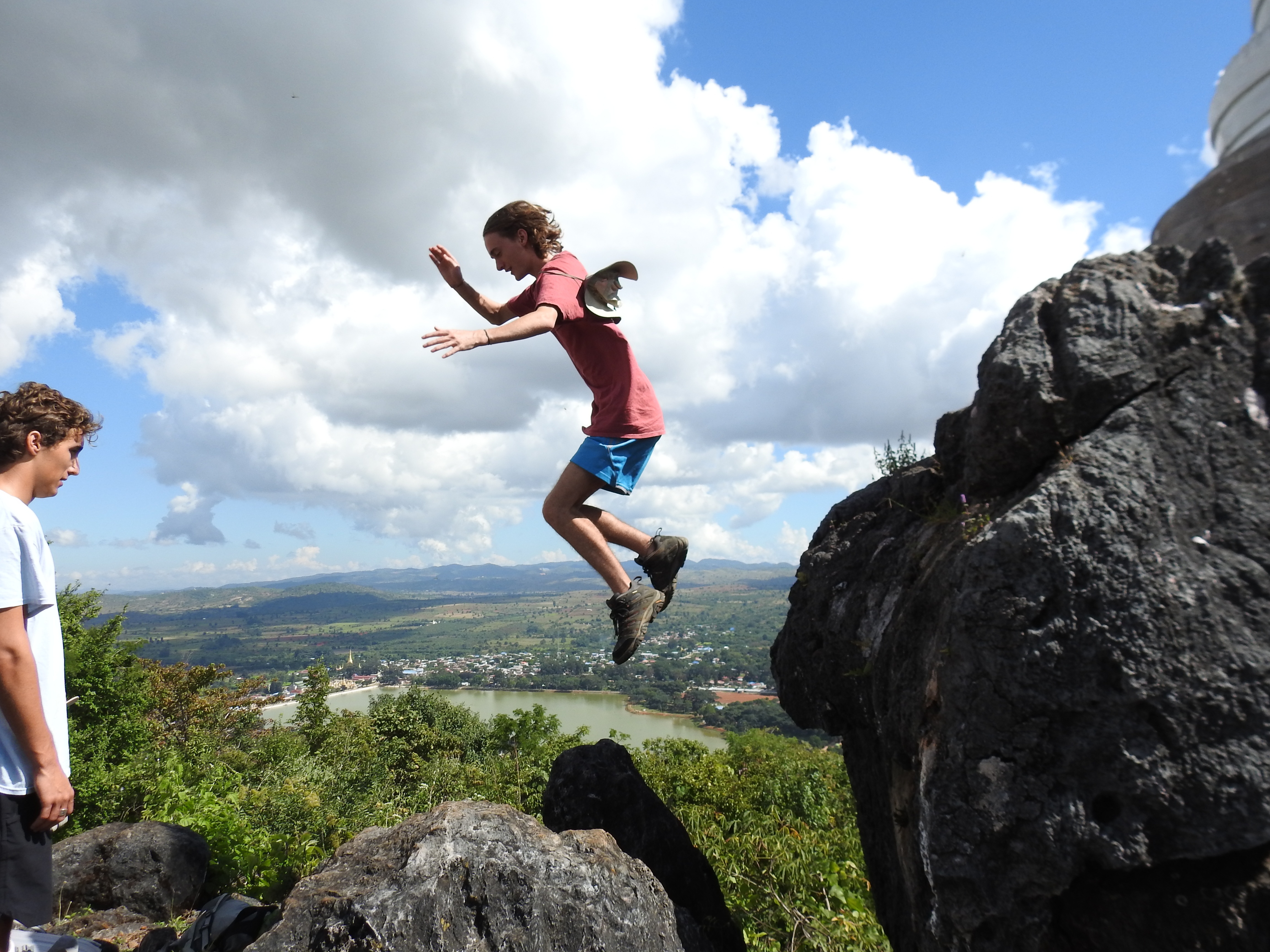 The caves themselves are not particularly impressive. If Carlsbad Cavern is a 9 on a 1-10 scale and Longhorn Caverns are a 5, these are a 3.

But the caves are not noted for their stalactites and stalagmites, but for what is in them. Our guide Myint says that there are 8,000 statues of the Buddha. While I did not count, I have no trouble believing this number. 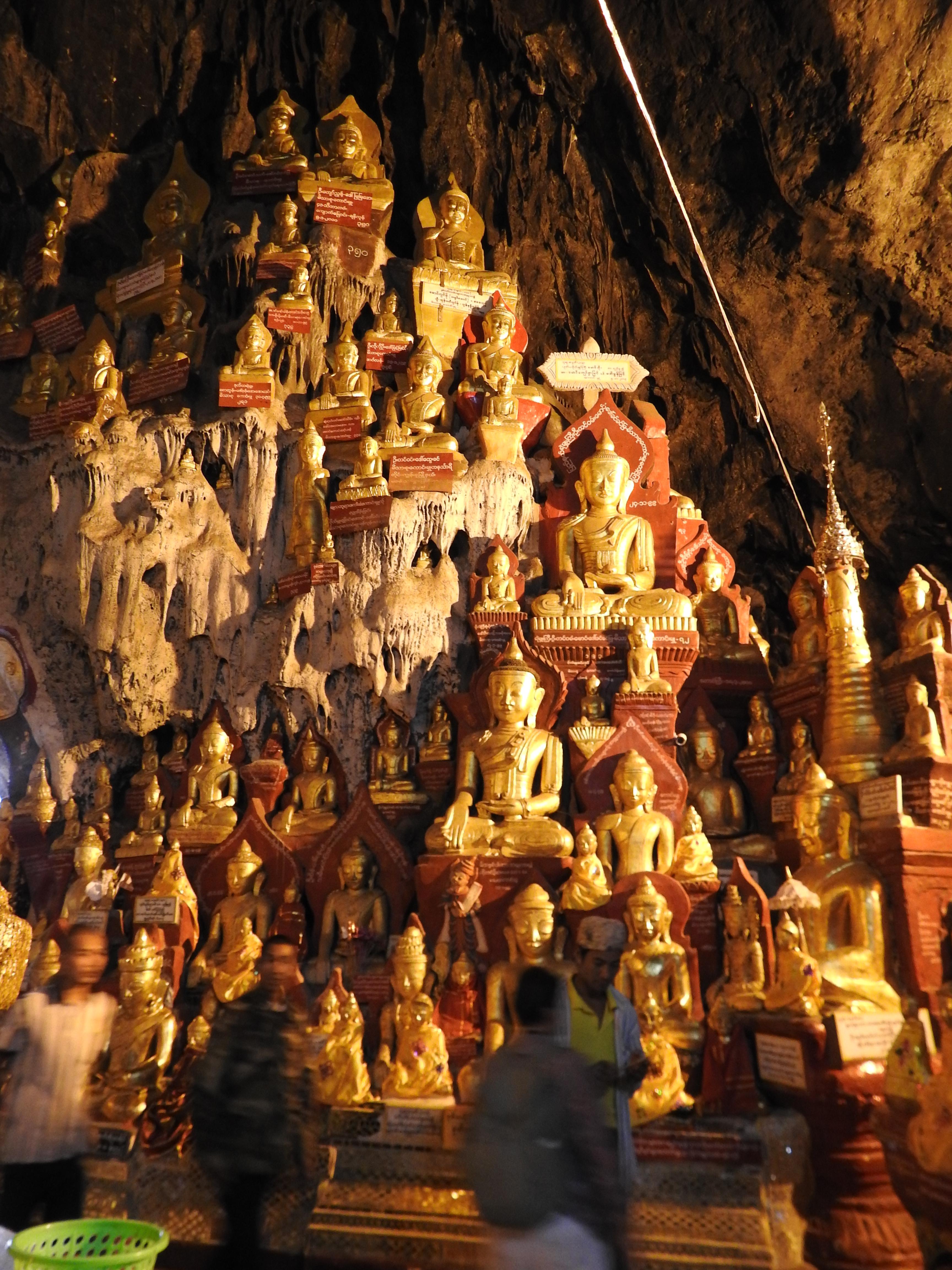 We had standing Buddhas and seated Buddhas. Buddhas were white, gold, black and red. Buddha rested on elephant pedestals and sat within the hoods of dragon cobras (some with 1 head and some with 2). 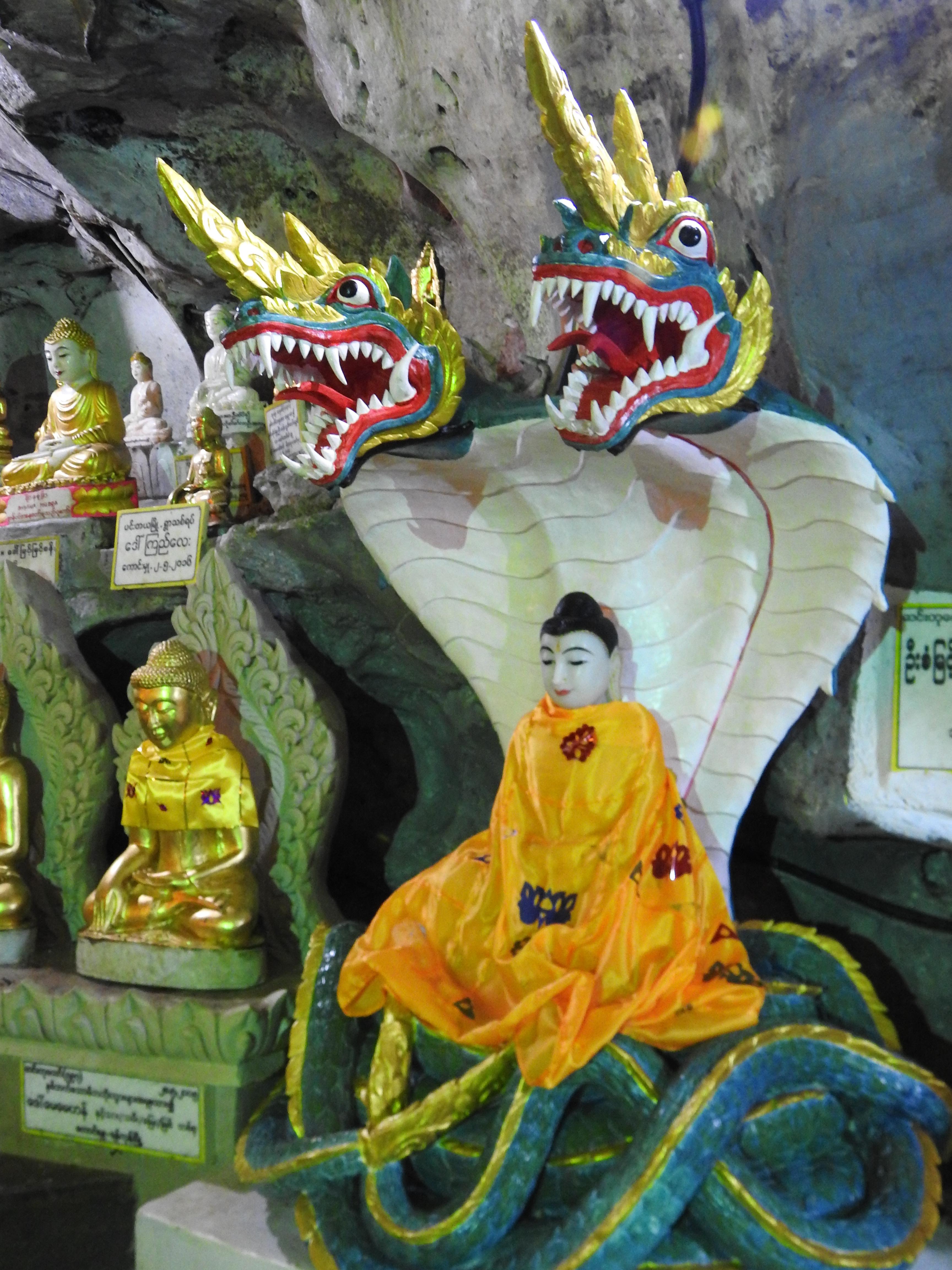 The effect was alternatively powerful and garish.

I am not sure exactly how much Myint added or detracted from our experience. As a devote Buddhist, he wanted to tell us about everything in the cave. Lets just say our Buddha appetite differed from his. We wanted the pu-pu platter - a modest smattering of appetizers – and he assumed we craved a feast.

Also, remember that his accent rendered the majority of his information unintelligible. So he would want to explain to us and wanted to KNOW that we understood.

It led to a few awkward moments. We did not want to spend 3-4 hours in the cave, but we did not want to seem unappreciative of his efforts or disrespectful of his faith. Let me share an example. He grabbed my arm and led Susie and me to a particular Buddha that was standing (most are seated) and he shared about 6-8 sentences. It was clear that this was not just any Buddha, but an important one. We simply could not divine why, so we guessed. “Yes, yes. That Buddha IS standing. How unusual.” But he correctly suspected that we were not getting the main point (in this case, the standing Buddha is the one you pray to for health), so he started his explanation a second time.

I am a bit of a math geek [Note from Susie: this is an understatement.], so my mind drifted to the following calculations. About every antechamber contains roughly 200-700 Buddhas, so lets estimate there are 16 antechambers. Myint wants to tells us something about 2-4 items in each antechamber. That suggests 32-64 items of interest, so lets call it 50. Given our language gap (and our inability to convince him that we understand his points) makes each micro-lesson last roughly 1-3 minutes.

Yup, that gives us 1-2.5 hours of miscommunication.

The kids have already separated themselves from us. We assumed we would find them eventually, but the explanations are simply too much for them. Usually I would cajole them to join us. We should stick together, learn together, struggle together.

In this case, I was just a little jealous.

With that said, I would like to share a could of the lessons we learned from Myint. He is a deep believer in karma, though it sorta comes and goes. I will share a few examples.

On the first hike with him, he told us a sad story. He took off his glasses and we could see that his left eye was milky white.

“We are so sorry. What happened?”

“My wife’s father was very sick. He lives in Yangon. She wanted to take the children to see him. While she was gone, I became very sick. By the time they got back 2 weeks later, the doctor said my eye was gone and I was blind.”

[OK, I know you are wondering “why didn’t you go to a doctor on your own?” or “couldn’t you have called a neighbor or someone for help?” We thought the same thing and asked, “Why didn’t you go to the doctor?” The answer came back, “Wife was gone, so now blind.” Sometimes you just have to punt.]

He also told us about how hiking kept him in great shape. I can attest to this. He handled the hills like a Sherpa.

But the next day at the caves, the explanations shifted.

“I have no aches and pains and am in good shape because I have good karma.”

“OK,” Susie responded, “But what about your blind eye?”

He would explain that his oldest son did of AIDS because “he had bad karma because he killed someone in a previous life.”

He said this in a matter-of-fact way that I might say “Wiley is going to Davidson” or “I had sesame beef yesterday” (very good, by the way).

Speaking of the meal, we made a mistake last night. We went to the restaurant recommended as the best in Pindaya. It had a menu that included Western offerings as well as Eastern items. Susie said, “Pasta and a cool glass of white wine sounds good.” We asked for their “best wine” and ordered a bottle of white. It was from a Myanmar vineyard we almost visited.

To use the parlance of the sommelier, the wine was thin, with notes of industrial cleaner.

It was beyond terrible. The label explained what grapes they used and espoused the virtues of the “European process” they employ. I have no doubt that they were used a process that came from Europe, but I believe it was not the right process. I think something got lost in translation when they sent their winery designer to Europe. Perhaps the words “fine wine” sounded a bit too much like “turpentine”.

We are now on our way back to Yangon. We are in a van. It will be our home for 14 hours.

PS Susie wants me to share one more story of confused Buddhist theology with Myint.

Myint explained that it is “very rare to become a human being.”

“Imagine a blind turtle in a vast lake. The blind turtle must put its head in a hole of a log, but it cannot see anything. The turtle is more likely to find that hole than a soul is likely to become a human.”

[Note: the explanation took MUCH longer than this. We have distilled it to the shortest version.]

Later Susie posed this question. “I understand that it is almost impossible for a soul to come back as a human, but how do you explain the vast increase in people all over the world? We have many, many more people on the earth now than 100 years ago.”

She awaited a nuanced theological answer.

“Many people get married and have babies.”

It is always good to learn new things.