In the Third WOrld Now 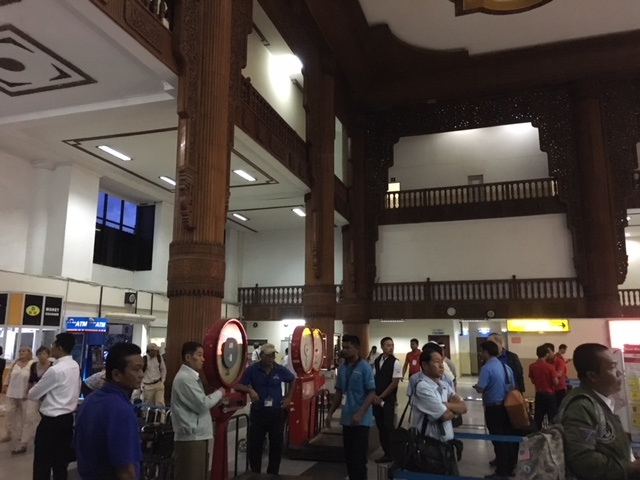 [Note: as predicted, we have left the world of strong internet to a thin trickle in Myanmar.  I will post blogs, but may need to add the photos later.]

It is now getting weird.

We are in Myanmar. We arrived last night into the modern and impressive Yangon International Terminal, complete with wifi and billboards featuring recognizable brands. We changed some money and had a taxi arranged for us by a bilingual airport employee hired for this very task. We were then taken to our “airport hotel”, which had all the creature comforts you would expect from any hotel in the US. The TV even had an X-Man movie playing. We had a nice meal. Heck, Virginia even had a hamburger. [Note: the “airport hotel” is no such thing. Sitting 7 miles of winding streets from the airport, it is no more an airport hotel than I am a sumo wrestling championship contender.]

I wondered if we had waited too long to visit this country. Perhaps we missed the raw and wild Myanmar.

But we woke this morning and met the same driver we had the day before at 5:30AM. He drove us from our “airport hotel” and delivered us to the domestic terminal. 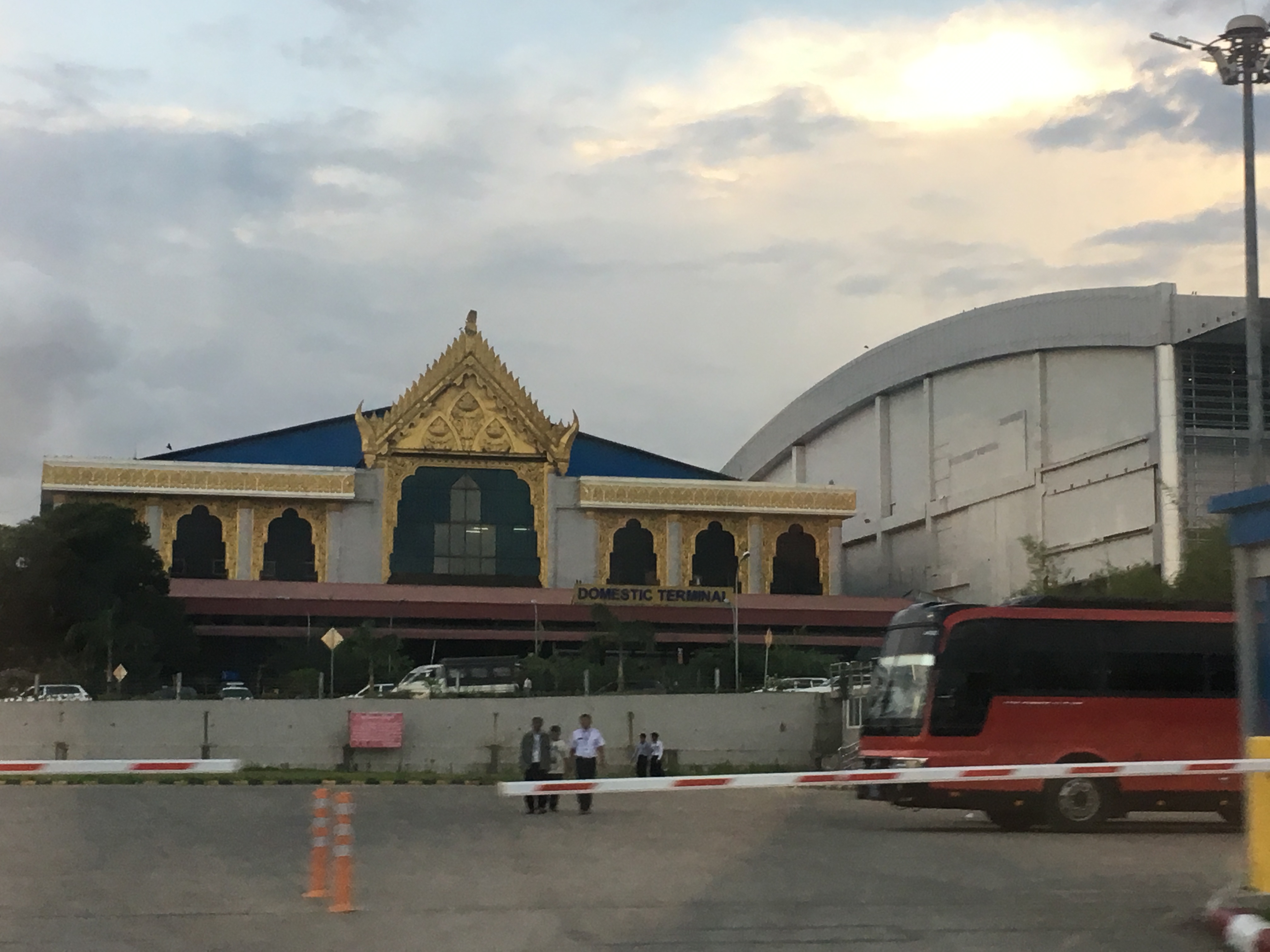 Within seconds, my concerns about modernity evaporated. Simply getting to the curb of the domestic terminal was an act of vehicular determination. The terminal itself reminded me of the most chaotic of rural Chinese train stations. It was a true beehive of activity. We saw no evidence of a queue or systematic process. We found a man that weighed our luggage and then pointed us to a check-in area. We got our tickets and watched carefully to assure ourselves that our tags got on our bags.

While all of this was happening in a language I cannot even begin to fathom, I suddenly noticed the lovely architecture of the building. The stairs and railings are all carefully carved wood, as is the support beams.

But there were also standing boxes of trash lying in the floor. Banners advertised hotels and tours and airlines and tapioca starch (get yours today!).

Security was, shall we say, tepid. I suspect that the authorities rightly assume that intra-Myanmar flights are not on anyone’s terrorism list. So our bags went through security without any adjustment (camera, computer and even half-full water bottle sailed through). After a brief and half-hearted pat-down, we were into the lounge.

Everywhere people were milling around and looking confused – and that describes the employees. The travellers all have the look of cattle – compliant and oblivious.

Well almost everyone. Wiley resented the early start. We hates waking early (3:30 and 5:00 on consecutive morning), dislikes crowds and struggles in less-developed countries. This last aspect reflects his compassion. He cannot justify why he has all the conveniences of comfort while so many people are relegated to poverty. I believe it saddens him. I did not fully realize this until we were in South Africa. On one particular tourist street in Cape Town, beggars are frequent. Liam can simply ignore them like a veteran New Yorker. But if they approach Wiley, cash is coming out.

I also have a few additional observations as I look around. Ironically I saw more westerners in the domestic terminal of a third world nation than any other place I have seen in China or Japan. Like us, they are going to see the treasures of Myanmar in the central part of the country, but it is odd to see Caucasian faces and hear English. ,

We saw a sign for the CIP Lounge.  We wonder what a “CIP Lounge” is for. Virginia’s guess is “Kinda Important People”, just misspelled.

We all sit in a huge guest lounge and wait for someone to subtly walk the floor with a cardboard sign with our flight number on it.

Add to all of this the fact that Susie is a reluctant flier. As a young girl, her parents alternated making jokes about downed airlines – “that is a DC 9.5” to refer to a DC-10 after a recent engine failure. Her parents took out flight insurance on their travels. As a result, she has a true fear of flying.

Of course, knowing this has only increased my admiration for her and her willingness to travel anywhere and everywhere. She has developed coping mechanisms. But she does tend to be edgy when we fly. This particular scenario is not conducive to stress reduction.   So she is taking deep breaths and smiling.

We arrived and found our way to our hostel.

Remember how we playfully mocked the Japanese toilets? We want to send them a message, “please forgive us.” The facilities are absolutely third world (and 150 feet from our room).

But the town of Bagan is amazing. I will share more on that tomorrow. Until then, enjoy your western bathrooms!